Warad, a child from the southern lands of Middle-Earth, is taken from his family and sent north as a hostage of peace. Adopted by one of the principal families of the country, he takes on a new name — Baranor — and rises through the ranks of the Gondorian army to become second-in-command of one of its principal fortresses. One of the few men capable of keeping the forces of darkness at bay. With that background, you’d be forgiven for believing that Baranor is the main character of Middle-Earth: Shadow of War. He isn’t, initially. He’s a prominent NPC in the campaign (even fighting alongside you in some missions), a player skin, and finally, in DLC campaign Desolation of Mordor, he's the starring character.

This growth is impressive, not just because he’s a cool character, but because Baranor is a playable black man. Someone who, in many other fantasy games, wouldn’t exist. 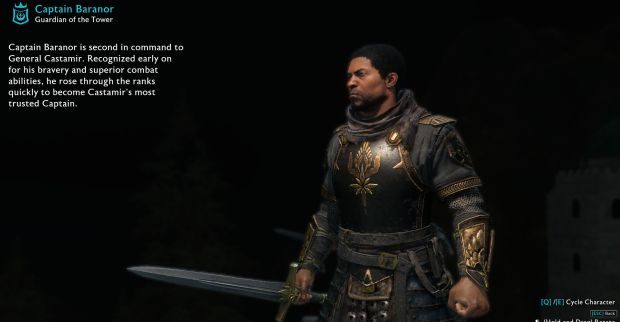 I’m young enough to say that I grew up with the Lord of the Rings film trilogy. As a lanky black kid with a love for overpowered loadouts, Aragorn was my hero. He didn’t just get one sword, like most of the fantasy heroes I had seen up to that point. He got two swords (even if one was broken). And a bow! He was tall, and noble, and extremely cool, so I made the natural choice to play every CRPG for the next decade as a dual-wielding ranger.

However, no matter how much I admired Viggo Mortensen’s stubbled portrayal of the prophesied king, I was also incredibly aware that I couldn’t be him. My hair doesn’t grow the right way. The shadow on my face isn’t the right shape. My eyes don’t have the same, piercing color. No matter how many times I swung a pretend sword in the mirror, it was the details that let me down. That made me feel that vast gap between who I wanted to be, and who I unfortunately was. The only people that looked like me in the Lord of the Rings universe were turban-wearing savages riding elephants in The Return of the King, to be cut down in a PG-13 spectacle of fire and carnage. 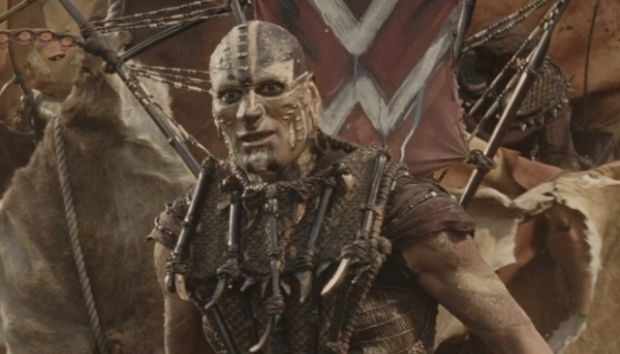 I had to scramble for heroes in nerdy media. Tying not to wince at characters like Winston Zeddemore, who started out as an Air Force Major before being reduced to an everyman comic relief taxi driver, became a constant, almost invisible task. I’d flinch at a disappointing black character— the first guy to die, the blatant comic relief, the exoticized supporting stereotypes embodied by Morgan Freeman’s character in Robin Hood: Prince of Thieves — and move on, searching for the aspirational figures my friends (who weren’t of color) had in abundance.

All of that said, booting up Middle-Earth: Shadow of War in a recent Steam Free Weekend, I had no idea how deeply I’d be affected by seeing Baranor in the Skin Selection screen.

I had already spent a pleasant hour playing as the default character of Talion, levelling up and ignoring the main storyline (as is ancient open-world gaming custom). Equipping the skin of a notable black man violently recontextualized my actions. I wasn’t just hunting down orcs as the period fantasy equivalent of Batman. I was a black guy, in the Lord of the Rings universe, double-jumping across Minas Ithil, exploding heads with impunity. Terrifying my enemies with ancient powers beyond recognition and weapons plucked from the cold, severed hands of their leaders, just as Tolkien always intended.

Meeting my dignified namesake in the course of the game’s story only increased the odd sense of pride I felt growing in my chest. 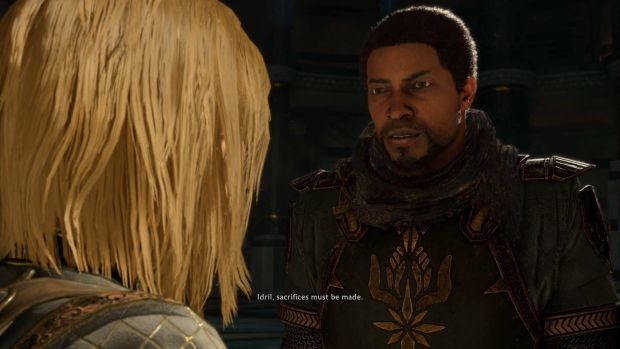 Baranor is honorable, but self-aware. He knows that efforts to save Minas Ithil, which is under siege by orcs, are likely fruitless, and while he may wish to save the city, he also has limits about the actions he will take to accomplish this goal. He’s respected by his peers, and honored by his soldiers. Most importantly, his existence is never questioned. There’s never a sly line from a nearby guard, hinting that Baranor was originally born in another country. You won’t even hear Baranor’s original Haradian birth name, Warad, until you play the DLC. You’ll go tens of hours before discovering that Baranor isn’t a Gondorian native, and when it is revealed, Talion reacts with surprise.

Baranor is such a natural part of the world that a complex, lore-filled explanation of how a black man ends up in Gondor and becomes one of its military leaders isn’t necessary. He stands out as a positive depiction of a person of color in a fantasy universe by simply fitting in (even when there are two of him on screen). 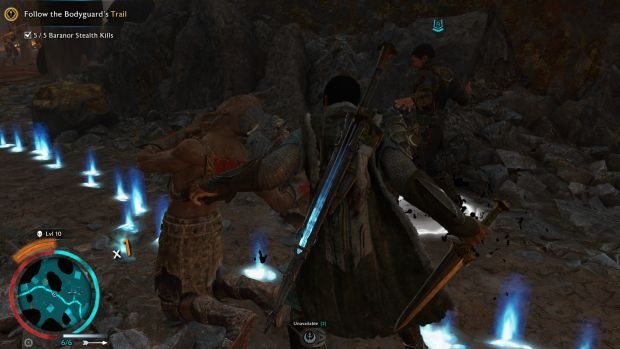 He also looks brilliant in every uniform in the game, which I feel the need to mention before describing how Monolith’s intentional, inclusive, and subversive approach to the Lord of the Rings canon is best displayed in Baranor’s DLC campaign, the Desolation of Mordor. 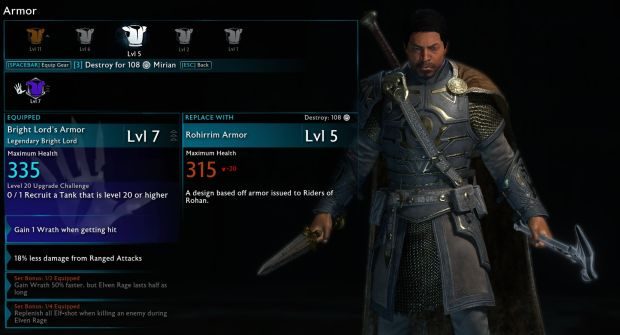 The Desolation of Mordor is structured as a score-based roguelike. Your goal is to kill orc captains and take over outposts as quickly as possible, to earn the money necessary to take over a fortress far behind Eastern enemy lines. Unlike Talion in Shadow of War, Baranor is a normal man. With no wraith powers or corrupting rings to call upon, Baranor makes do with a grappling hook, glider, transforming crossbow, and unfolding shield, making combat and navigation distinct from the main game.

Where Talion is a blunt instrument, wading into battle with supernatural abilities, Baranor is a finely-honed dagger. Using this variety of colorful gadgets and recruitable mercenaries, he juggles long-range engagements with frontline fighting, smashing through enemy guards with his shield and chopping nearby orcs in half by using his grappling hook as a whipping cyclone of death. Your outfit and weapons can be modified with upgrades pulled from dead captains, providing ample reason to seek them out despite Baranor’s mortal weakness. Battles carry tangible stakes. If Baranor dies, your gear upgrades and campaign progress are retained, but the outposts you conquered, weapon modifications you found, and mercenaries you recruited, are reset. 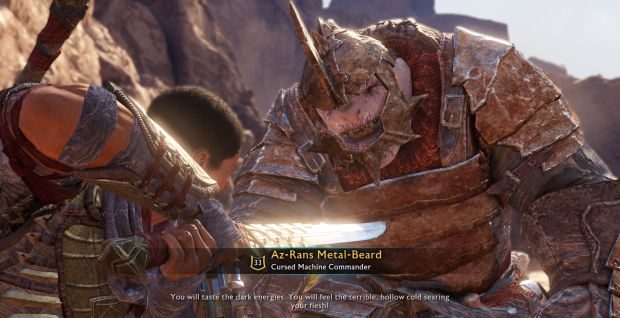 The DLC finds Baranor cut from his ties to Gondor. On his journey into the Eastern lands to recruit mercenaries and take the fight to Mordor behind enemy lines, his chosen compatriots are eaten by sand worms within the first thirty seconds of the two-hour scenario. The worms are...large. 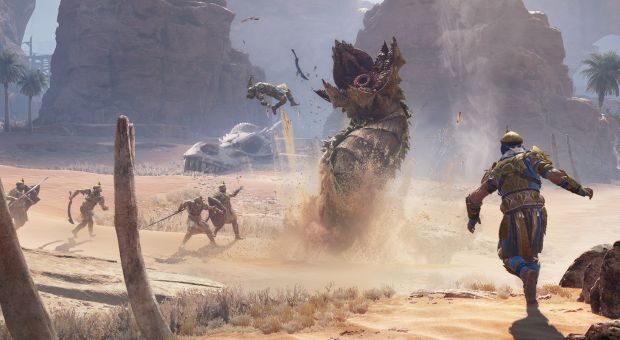 Empty-handed except for some gadgets and his natural skill, Baranor attempts to recruit mercenaries, only to find them led by his long-lost brother, Serka. I hated Serka. He’s the exact stereotype I found myself flinching at in other works. A posturing, greedy man of color, performing for an audience both inside and out of the screen.

And then I kept playing. 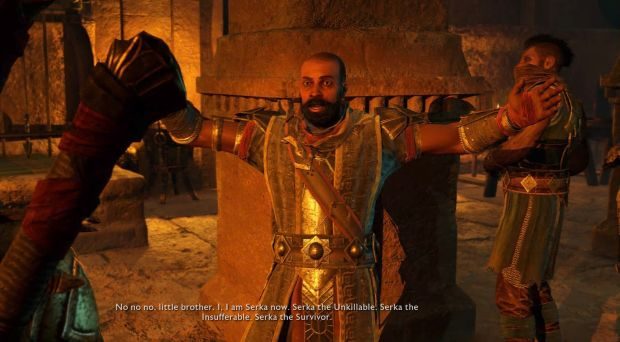 It turns out Serka was forced to adapt to his surroundings, just as Baranor adapted to the gentler environs of Gondor. Finding that gold, wits, muscle, and a reputation, were the only obstacles to death in the desert, Serka fought his way to the top of the mercenary ranks. Then, he stayed there, with a regular supply of funds, and an ‘unkillable’ reputation bolstered by that same performance I initially reacted against.

Serka is a complex character who truly cares about Baranor, and his men, whose edges wear away when exposed to the heroism of his brother. As he shows his true colors and loyalty to Baranor, he’s deposed—and the caring root of his theatrical bravado is made apparent by the blatant selfishness of his successor. 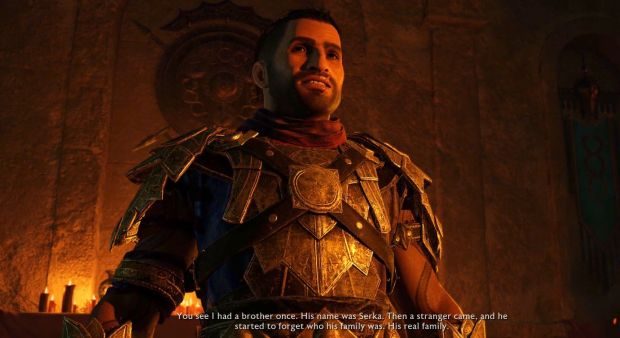 To make a short story shorter, you save Serka, share some tender moments, and accomplish your objective, with the suggestion that your adventures capturing Sauron’s fortresses behind enemy lines continue. An exciting prospect considering the speedy, high-flying navigation, the variety of tactical and brutal combat, and the strength of the characters seen within the brief running time. 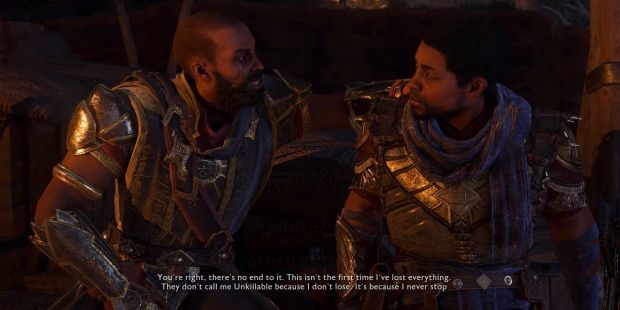 Monolith has been criticized for its approach to Lord of the Rings lore. Shelob the spider having a sexy human form in Shadow of War is only the tip of a contentious iceberg, for some fans. However, in the unfolding character of Serka, I can see a microcosm of the studio’s wider goals with the Middle-Earth series to date.

The bounds of the Lord of the Rings canon — what it’s saying, how it can say it, who it can represent — isn’t set in stone by J.R.R. Tolkien. It’s defined by us, the creators of today, through the choices we make when given one of the most influential and successful licenses of all time. To uphold the status quo, or to hold it to the light, and chart a new path forward. 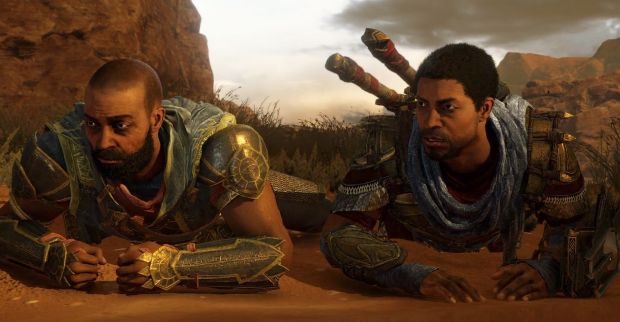 I love my precious, greedy trash son, and his noble, unquestionably cool brother. In Serka, I see the defying of simple classifications and characterizations. In Baranor, I finally have the fantasy hero I always wanted. The hero I needed.

Thanks to Monolith’s choices, that kid swinging a sword in the mirror so many years ago is Baranor—and they are cool as hell.