If you click on a link and make a purchase we may receive a small commission. Read our editorial policy.
Premature Evaluation is the weekly column in which Steve Hogarty explores the wilds of early access. This week, he's losing his head in skeletal action platformer Skul: The Hero Slayer.

A side-scrolling roguelike with a pixel art style and an adorable little skull person protagonist, Skul: The Hero Slayer could easily be mistaken for about seven thousand other early access games. After all, we’ve long since hit peak pixel, reaching the stage in society where lovely chunky squares are the mainstream rather than the exception, and aliased edges and bezier curves have to cower and beg in the street for hovering roast chicken sprites.

Does that make any sense? I’ve got a touch of fever this evening and I’m writing this introductory paragraph in a state of delirious hypochondria, so my usually astute and cutting edge observations have reverted back to PC gaming circa 2007.

Earlier however, back when I wasn’t careening ass-first down a greased-up slippy-slide to my almost certain demise at the gaping maw of a global pandemic, I was very much enjoying playing a little game called Skul. It’s an early access rogue-like, in as much as you respawn back at a big demon temple whenever you die, holding a pocketful of purple currency you may use to improve some of your attributes before trying again. Unique to your hero is their ability to remove and throw their actual head at enemies, before either running after it to collect it or teleporting to wherever it landed. 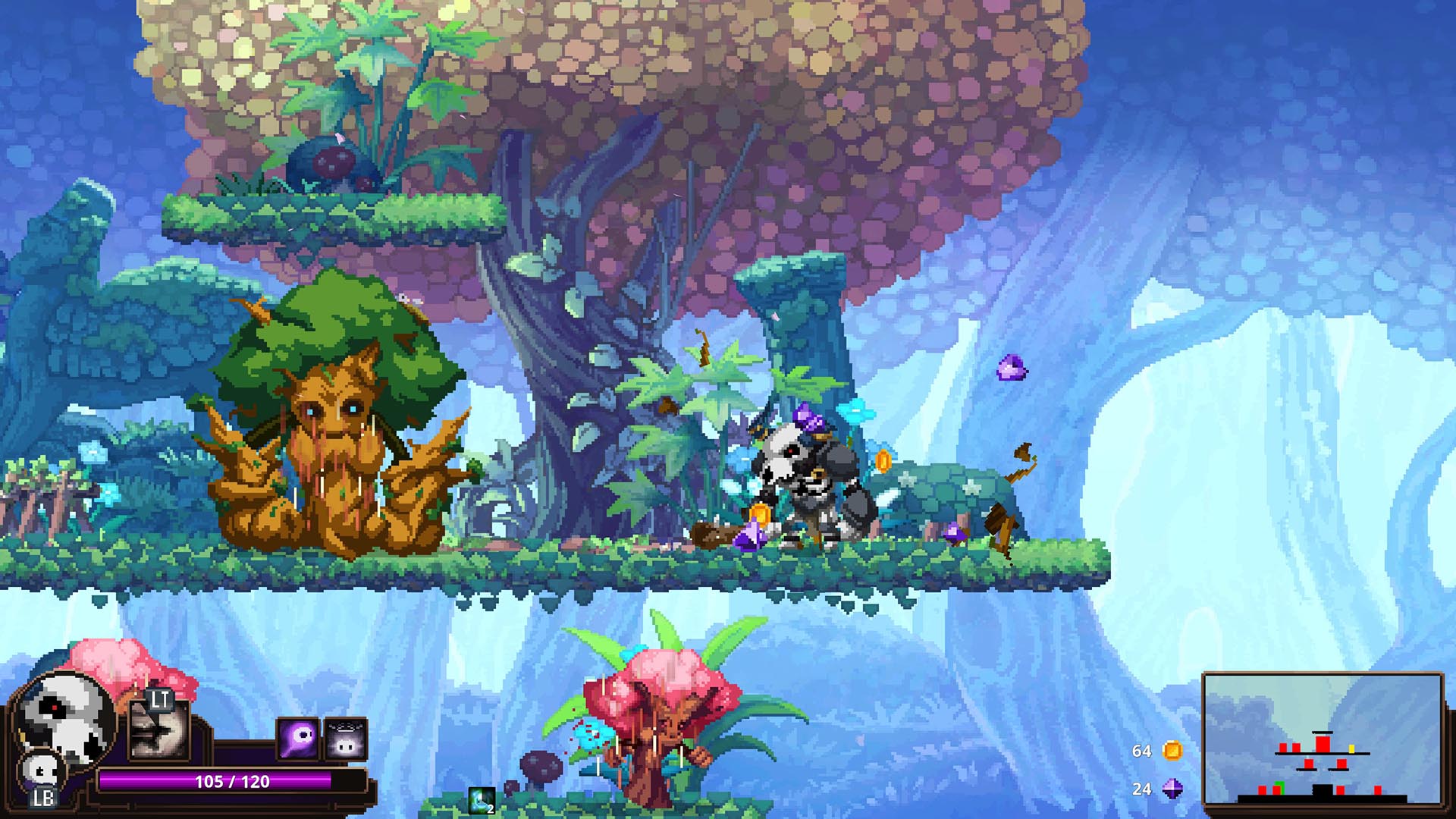 While teleporting after your own skull sounds like the basis of a puzzle platformer, that’s not what Skul is. You never have to drop your own head down a laundry chute to reach a locked basement, or send your skull up in a dumbwaiter to materialise unexpectedly on a mafia boss’s dinner table. Instead, Skul is a room-clearing combat game set in a fantasy world, where you defeat enemies in randomised arenas to unlock doors and proceed through chapters. You can throw your skull like it’s a bony hand grenade, as well as slash with your sword and dodge to slip past attacking enemies. The fighting feels snappy and wholesome, with the well-drawn enemies graciously telegraphing their attacks with helpful winding-up animations, so that at the top of your game you could reasonably chart a course through the rooms without ever taking a hit.

But wait, all of that’s not even the point of the game. This is: there are dozens of other skulls you can replace your own with, each one granting you new powers and abilities. Swap out your regular skull for the mummy skull and, in exchange for reduced movement speed, you get a gun and become impervious to damage from traps – the universally agreed upon characteristics of a mummy. Slip into the wolf skull and you can move around more quickly, cause damage when you dash and perform a powerful short-range claw attack. The minotaur skull grants you an area of effect ground-pounding skill, useful for bunched up enemies. The jester can chuck knives which explode, a gargoyle skull lets you fly. 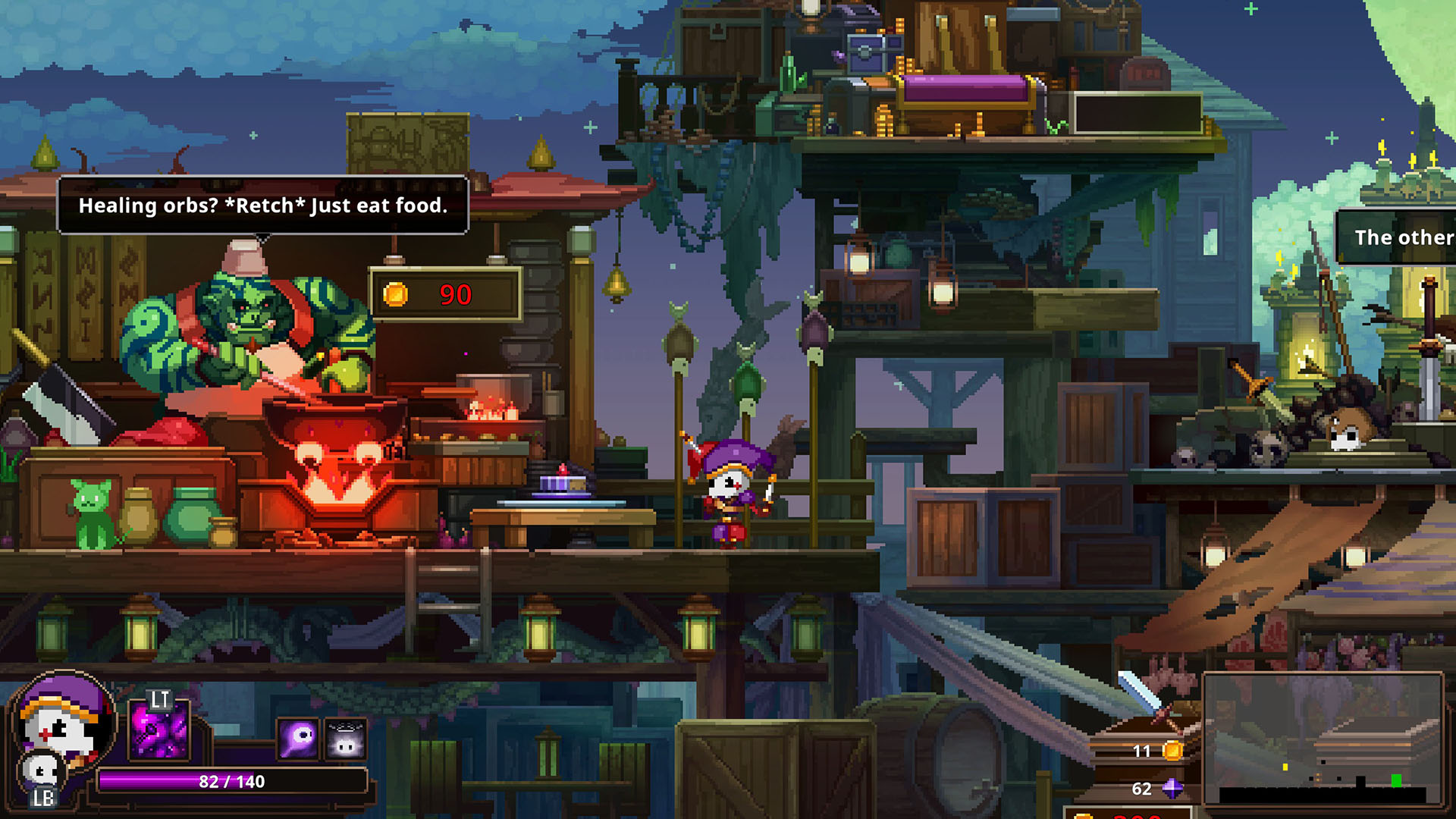 The variety in skulls is bonkers huge, with the most powerful ones appearing less often than your run of the mill, bread and butter bones. New skulls crop up in graveyards that appear every four or five rooms or, once you’ve progressed a short while into the first area to rescue a helpful fox character, can be picked up immediately after respawning. Depending on which one you start with or find, your run will shape up differently, either pressing you to get up close to enemies to poke them to death, get all aerial on them, or hang back for ranged attacks.

Here, it feels the slim variety in enemies in this version of the game doesn’t match up to the grab bag assortment of skulls you’ll be wearing. As the last demon soldier left behind, you’re fighting a human army comprised mainly of warrior fodder, with a few crossbow snipers and double-sized brutes to mix things up. Nature is also turned against you. Trees have come to life, corrupted by the purple stuff you’re using to enhance your abilities, and granted the magical ability to send sharp roots up through the ground from a distance, or emit hot pink guffs of poison gas around them. 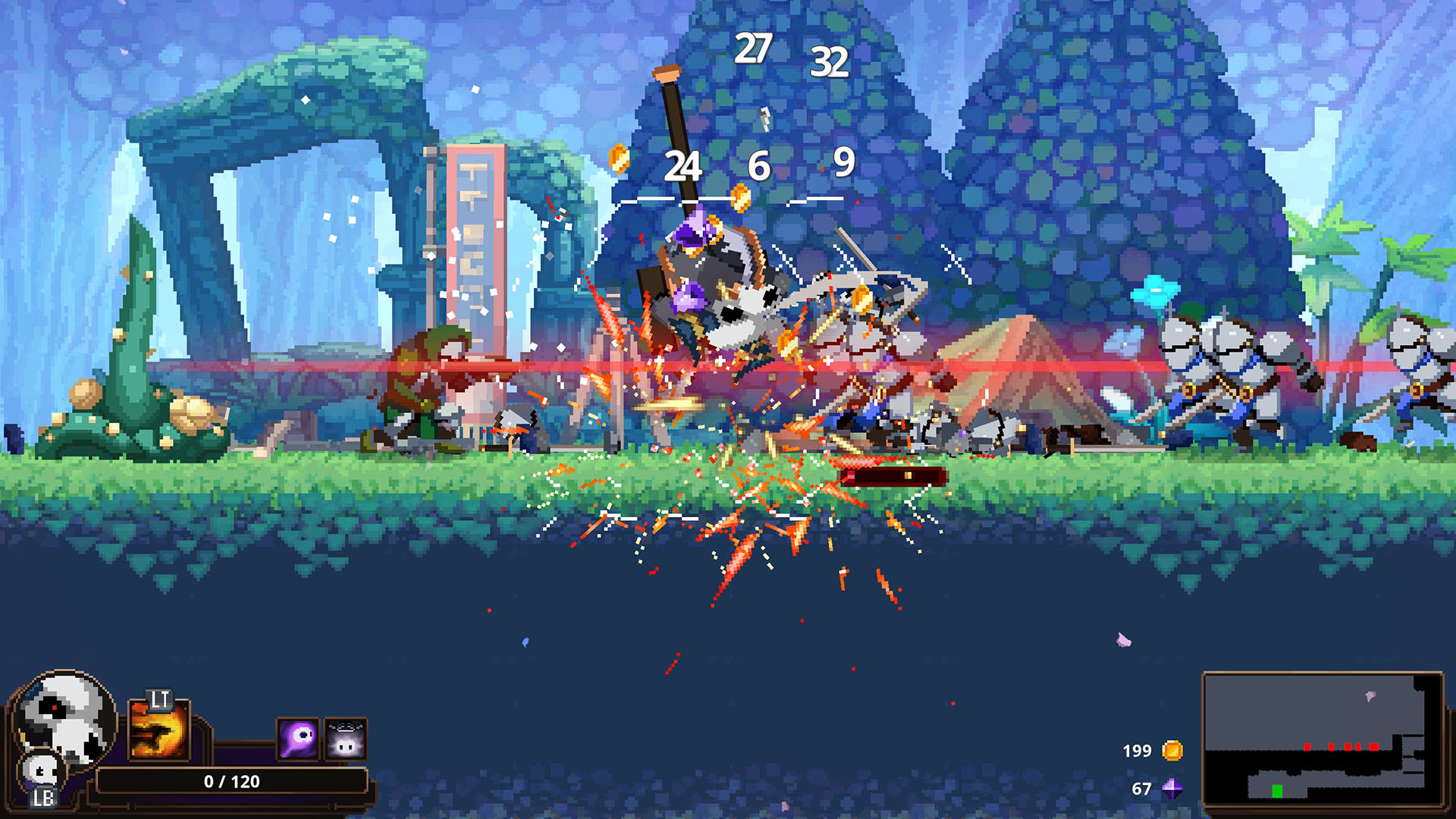 Too often though, the shape of the level places enemies on awkward to reach ledges, or spawns enemies designed to be kept at arm’s length next to those who need to be fought up close. Certain environmental traps, like thorny vines, exist to keep you from standing in one spot for too long, but others, like the plants that intermittently spit projectiles, feel like they’re from another game entirely. Some rooms have enemy-buffing shrines, which can be destroyed to remove the advantage they infer, but the shrines themselves take such a beating that it’s usually easier to persist in going after the buffed enemies directly.

All of which is to say that in this unbalanced early access version, Skul doesn’t flow nearly as well as it could. Drawing a weak skull early on for example, or simply a skull you don’t enjoy using, effectively scuppers any given run from the outset – it feels like roguelike poison to be dealt a bad hand immediately after respawning. And the rewards you’re unlocking as you accrue your purple points are so incremental as to be barely noticeable, adding tiddly percentage points to your attack power or millisecond decreases of cooldowns at a time. 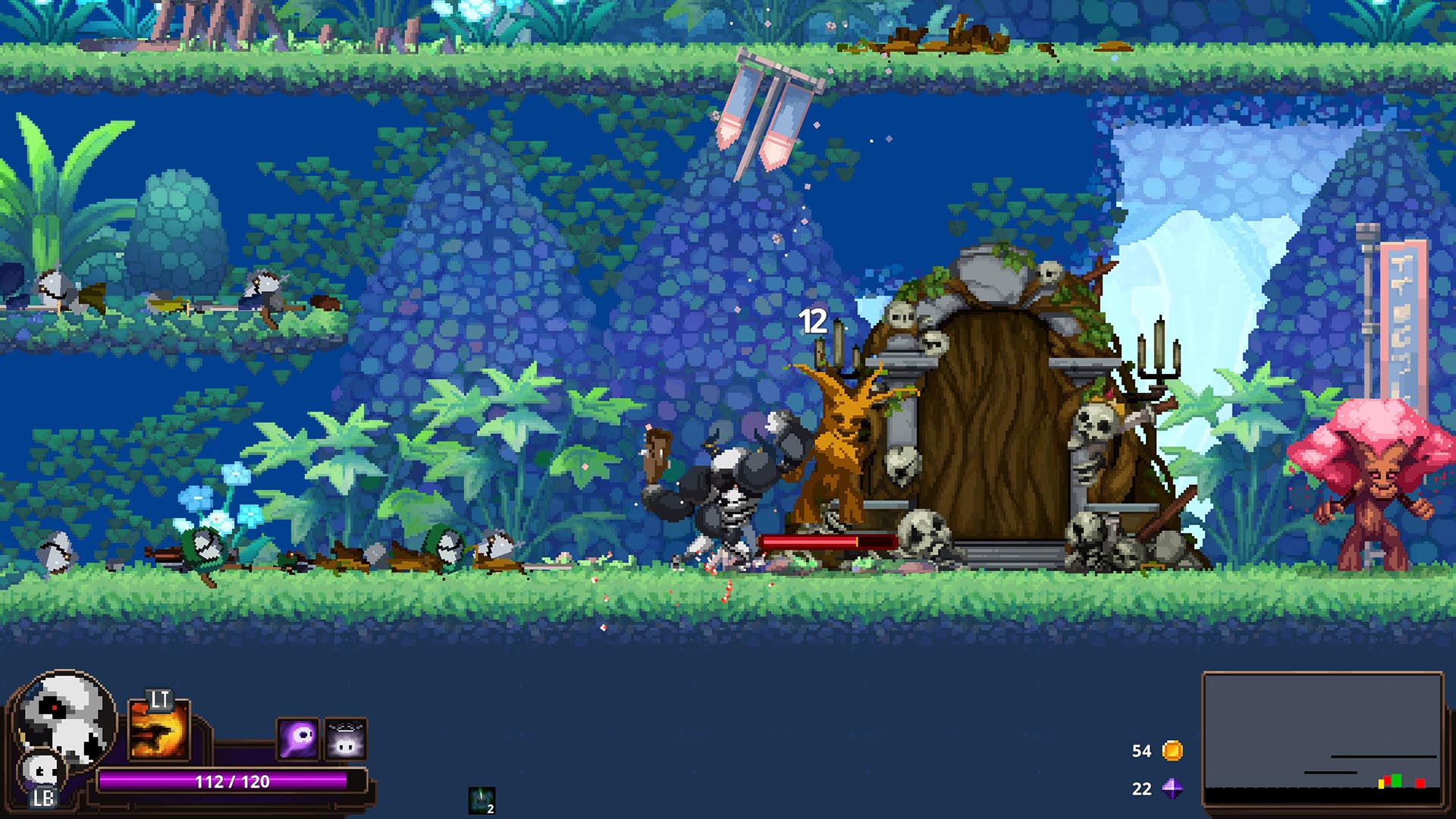 There’s always a balancing act between pushing the human player to improve their literal pad-in-hands skills, and making things gradually easier by lavishing the character with improvements to their in-game attributes, but Skul hasn’t yet found where that balance is. As somebody chronically incapable of bettering themselves, I naturally prefer the latter.

None of these are fundamental problems, and this is all tweakable stuff that should hopefully improve in future releases. Skul’s burgeoning selection of swappable heads places the cold hand of randomness at the heart of this delightful and colourful roguelike, just as my overheating brain placed a series of mixed body part metaphors at the heart of this awkward sentence. To what extent the developer can corral those wayward dice rolls into something more reliably fun remains to be seen.