Slay the Spire is brill, if you haven't heard, and with each early access update it only gets briller. The most recent one spruced up the daily challenge mode, making it even harder for me to resist playing it every day until the third character comes out. Before the daily modifiers mainly just made your life miserable - introducing tougher enemies, lowering your health and so on - but they now tend to come with benefits as well as drawbacks.

Alec has already sung the praises of the mode's earlier form, and now I get to do the same with this better version.

In the revamped challenge mode, there are 3 modifiers rather than 4. The mod-picking algorithm has also been prodded into rarely throwing up the same modifier two days in a row, and never more than two days running. Best of all though is this line from the patch notes: "many of the mods were altered or reworked to focus more on creating interesting situations instead of being straight difficulty raisers."

I liked how the old version made the game trickier in interesting ways, preferring it to the single, simple modifier you get as you slay your way up the ascension ranks. This new version - at least based on today's daily - still makes the game more difficult, but in a way you can deal with if you play smartly. Here's what today's looks like: 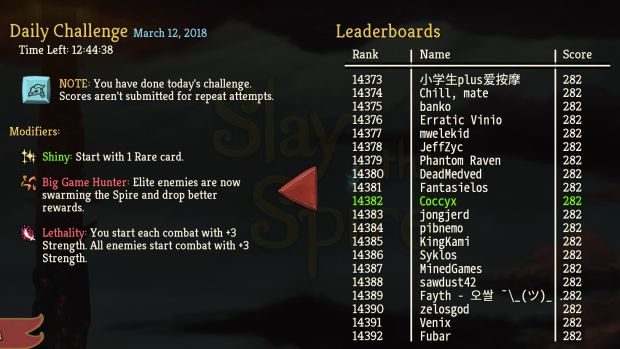 Also note the new leaderboards and my mediocre performance. There's only a global board for now, which just makes me look worse.

The beauty of daily modifiers is that they force you to look at a game you've become comfortable with from new angles. So today, starting with +3 strength incentivises you to build around low cost, low damage attacks that eek out the most benefit from strength gains. You'll have to wade through more elites, but each of those elites drops a rare card - which if you're anything like me will toy with your tendency to walk into battles you can't win. With my deck bursting with rare cards from past elites, I was sure my 20 hit points would be enough to see me through a fight with a giant dagger-wielding fist. They were not.

There's also been a couple of changes that apply to every mode, most notably a tweak to the Hexaghost so it no longers stacks up strength to the point where it can squash you in one hit. You can mosey on over to the update page to see the patch notes in full.