I’m not a massive fan of New Year’s Eve celebrations. This is partly because I’m the sort of petulant child who rebels against being told that we are definitely having scheduled fun with an air of calculated, sulky misanthropy. It is also because NYE is one of those occasions that make complete strangers think it’s okay to touch each other and you, with no preamble.

Even worse, it’s an occasion where you’re supposed to mack on with someone at a prescribed time! What if you don’t have someone to kiss! What if you try to kiss someone and accidentally become a viral sensation because they leaned away and grimaced and closed their mouth and your lips ending up flapping over their face like a fish. What if that?? Or it might turn out alright, I suppose. 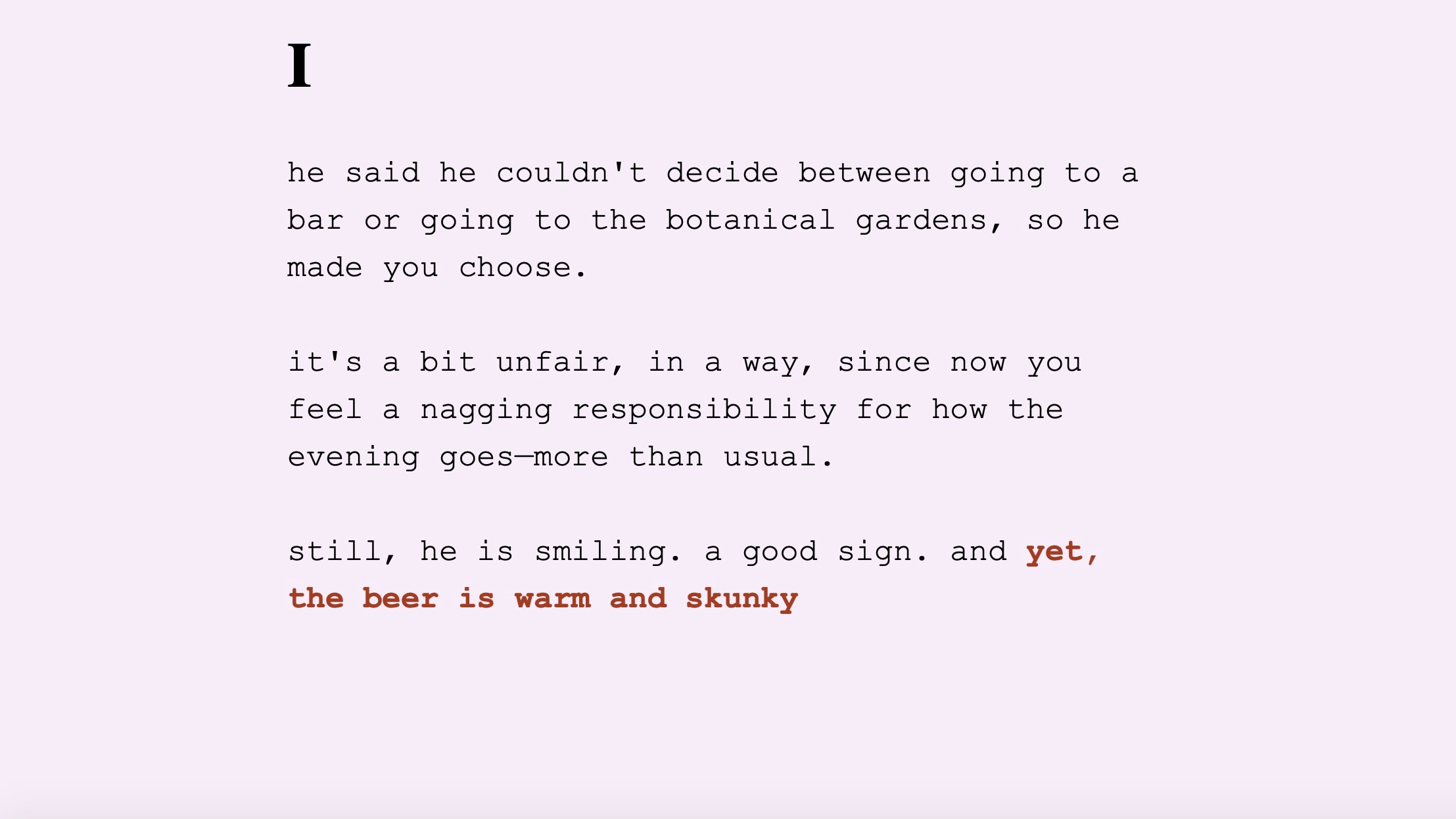 Smooch.click is a very short interactive fiction game by Devon Guinn, and it simulates the moments leading up to a kiss (and the moment immediately afterwards). These moments can take place over a few different dates, or one after the other on a single date. They’re pulled from a pool of possibilities, but do involve some choices on your part -- are you feeling tense or relaxed? Is your partner’s breath warm or stale? Your attitude in these responses can feed into the quality of the eventual smooch. Just like real life!

I got an email about Smooch.click at the tail end of last year. I played it over the break and it made me think about New Year’s Eve and kissing, and how absurd and weird it is that kissing is a thing at all. I’m pretty sure someone once told me down the pub that it’s so we can test each others genes via spit, to check for baby-making compatibility. But if we’re all walking around with little DNA facilities in our mouths how come it always takes so long to test for it in NCIS? Why isn’t there a detective show starring a maverick licking his way across crime scenes, and getting perps to spit in his mouth so he can slosh it around like a fruity merlot? 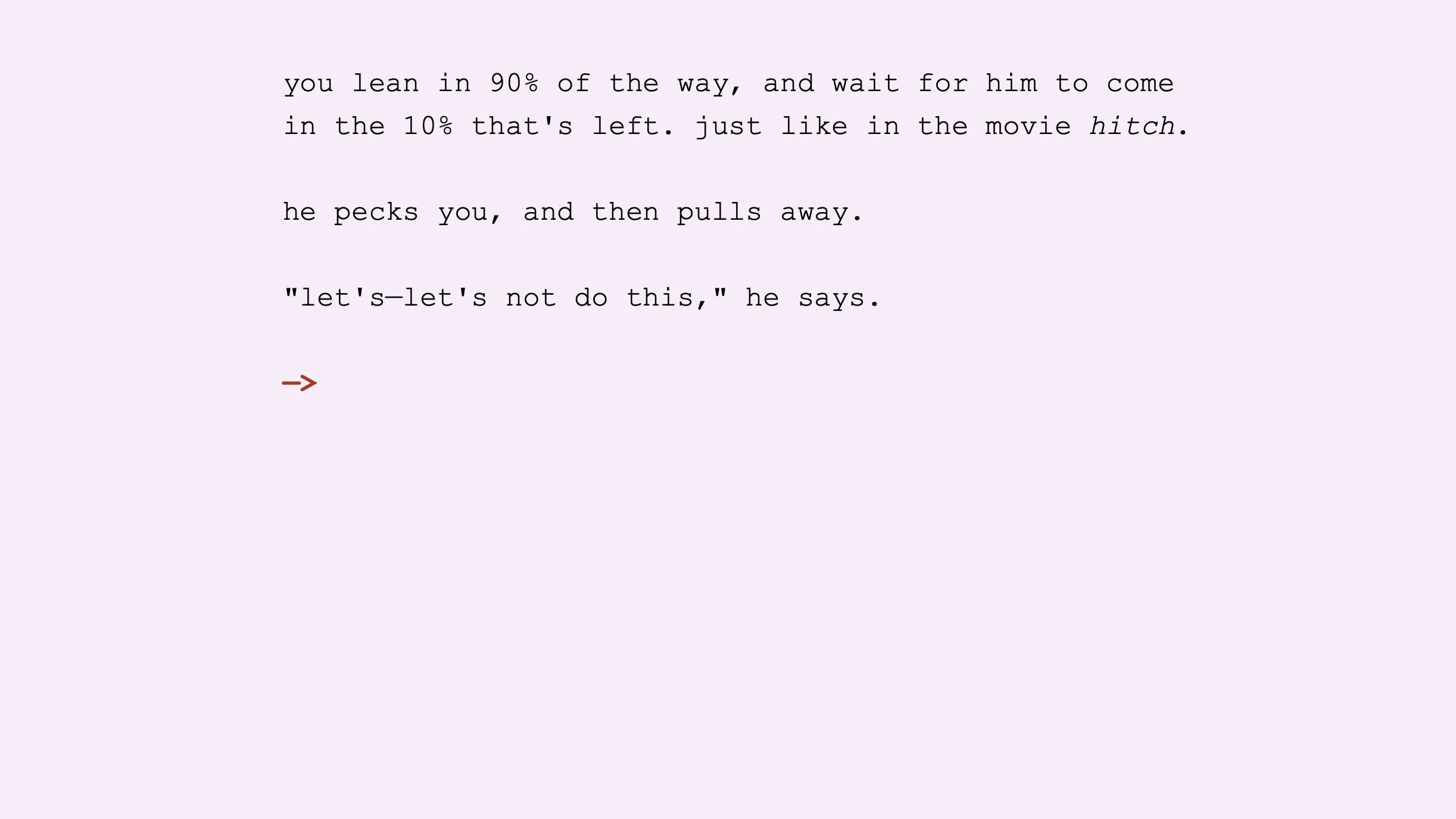 A study a few years ago estimated that actually just less than half of societies in the world think romantic kissing is at all a normal thing to do -- it’s possible that it’s an excuse to get close enough to someone to smell the pheremones in their sweat, that became lip mashy-y in some-but-not-all areas of the world. If that’s the case, we’ve also managed to convince ourselves that kissing is just nice. Now kisses have a weird roulette wheel that you just have to hope you don’t completely crap out on.

And for all that I have a peculiar aversion to the word smooch when used by an adult (see also: grown people referring to their genitals with terms like ‘wotsit’ and ‘foofoo’) Smooch.click does a great job of simulating all the aspects of kissing, in a very simple way. Sometimes your mind wanders and you can’t stop thinking about your frayed curtains. Sometimes you’re excited to kiss someone and then it turns out that it’s like smushing your lips against a partially microwaved dinner plate, or they get close enough for you to tell that their breath is stale and horrible. If you’re reading this and you’re a smoker I regret to inform you that your breath is almost certainly worse than you think it is. Sometimes you kiss someone and it just feels weird and wrong. Or it might turn out alright, I suppose! Smooch.click needs only a few lines of description or dialogue to get those feelings across. 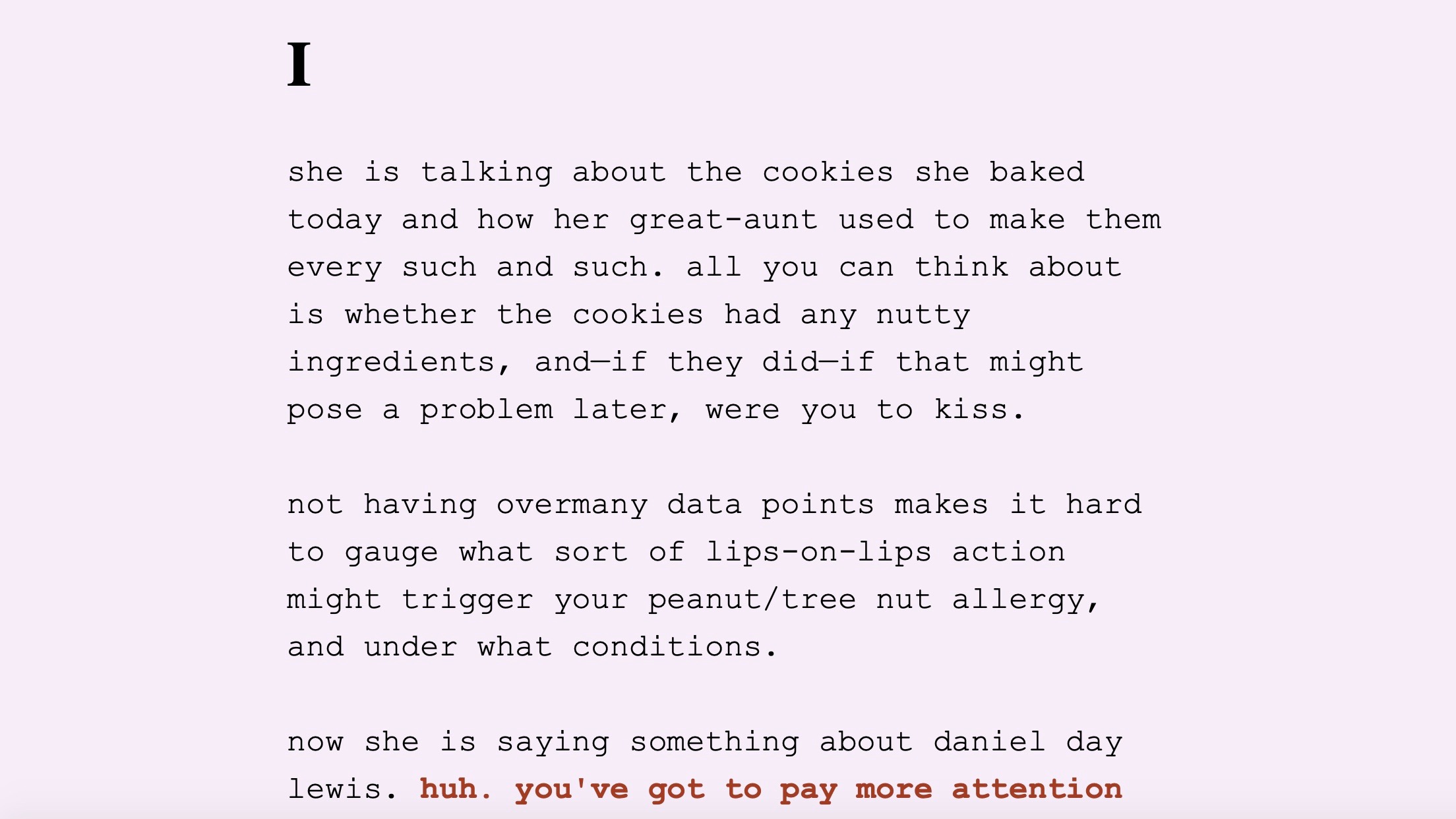 The clarity of its writing is impressive, especially since this is the sort of thing that writers often really, really struggle with. See last year's Bad Sex Awards for many NSFW examples of grim literary description of sex, a kissing-adjacent activity. For some reason we keep trying to perfect descriptions of the physical feeling, whereas Smooch.click recognises that kissing is more about all the parts around that.

(My first kiss was at a cinema; my friend and I had gone to see Two Weeks Notice, each with a quote unquote boyfriend, as a kind of double date. My date was called Andy and it was a classic first kiss pre-teen washing machine, with the added bonus that we were sharing a Fanta, so my entire lower face became sticky and orange flavoured). 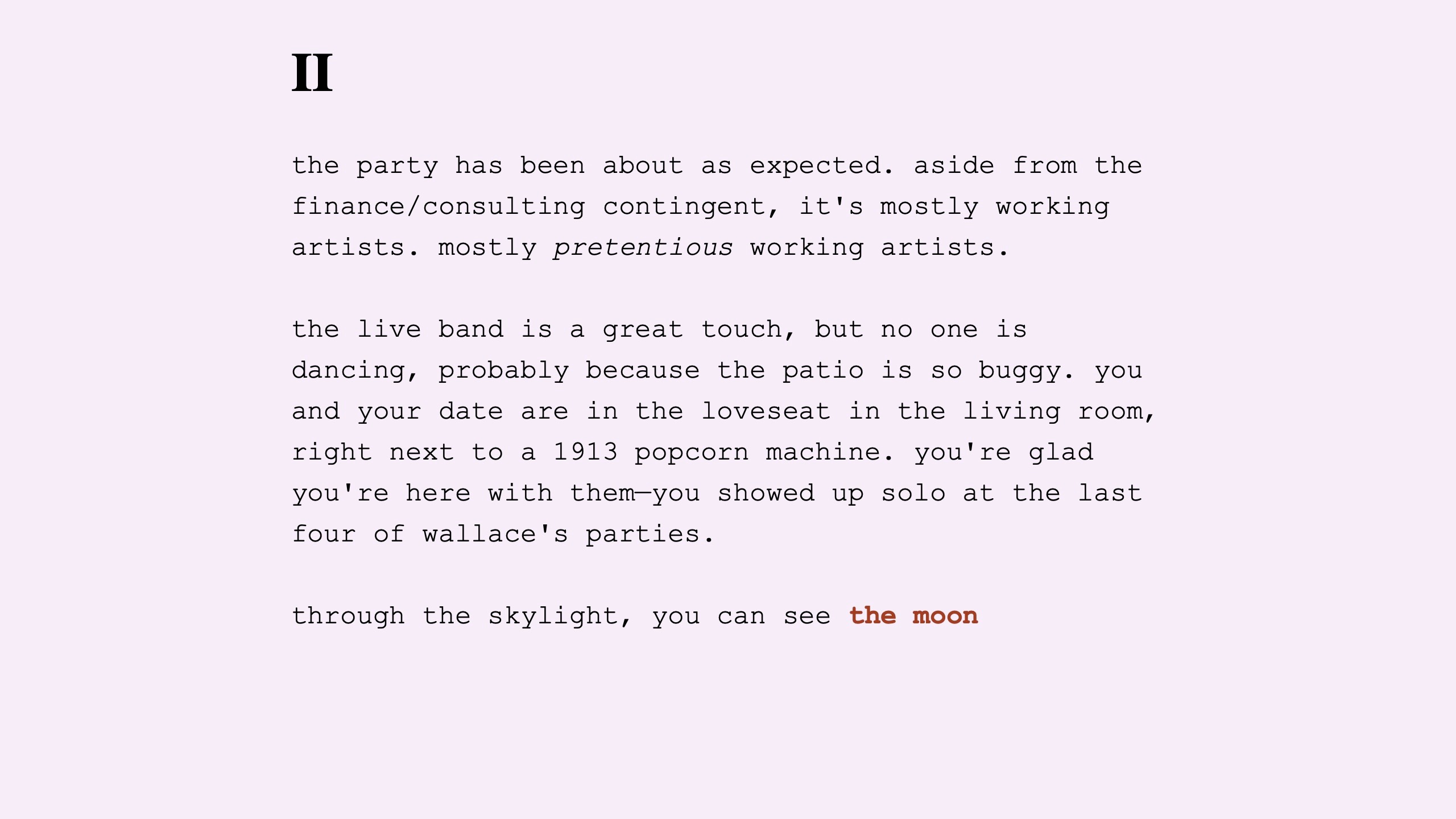 But Smooch.click also throws in some wild cards. Some curveballs. Some endings that lean in to how absurd kissing actually is, if you think about it for longer than a hot second, and I really love it for that. Kissing is, after all, a weird thing to take as seriously as we often do, especially if science tells us it’s really a way to huff your partner’s pit sweat. It's absurd, really. Imagine explaining kissing to aliens. Smooch.click has more endings than you might be expecting, and it's worth giving it a few spins to see what happens. It will almost certainly surprise you, and probably make you laugh, too.

Smooch.click takes about three minutes to play through each time, so you can experience the joy/fear/excitement/disappointment/weirdness of a kiss in less time than it takes to microwave a can of soup. Or actually kiss someone, if you’re not fancy. That’s at least ten kisses over lunch. Or like thirty, if you’re not fancy.