Since colony sim RimWorld left early access at the start of the year, it hasn’t changed. And that’s fine. It can be hard to remember, when so many sandbox-type games are constantly having new content shovelled into them like coal into a furnace, that games sometimes just… get finished. Still, when you’re used to coming back to a game and falling in love with it all over again every time it gets new content, it can feel weirdly sad when the developer decides their work is done.

Nevertheless, I keep finding reasons to come back to RimWorld, and I want to share a few of them with you. Even without the cornucopia of bizarre mods available, the game offers a ludicrous potential for finding new ways to play. With your starting colonists, equipment, location and even game rules open to complete customisation, you can make it into whatever settlement management game your heart desires. Some gimmick playthroughs - for example, the dreaded Ice Sheet Challenge - are famous, but I’ve got a few recipes of my own I think you’ll enjoy. Here’s five of them: 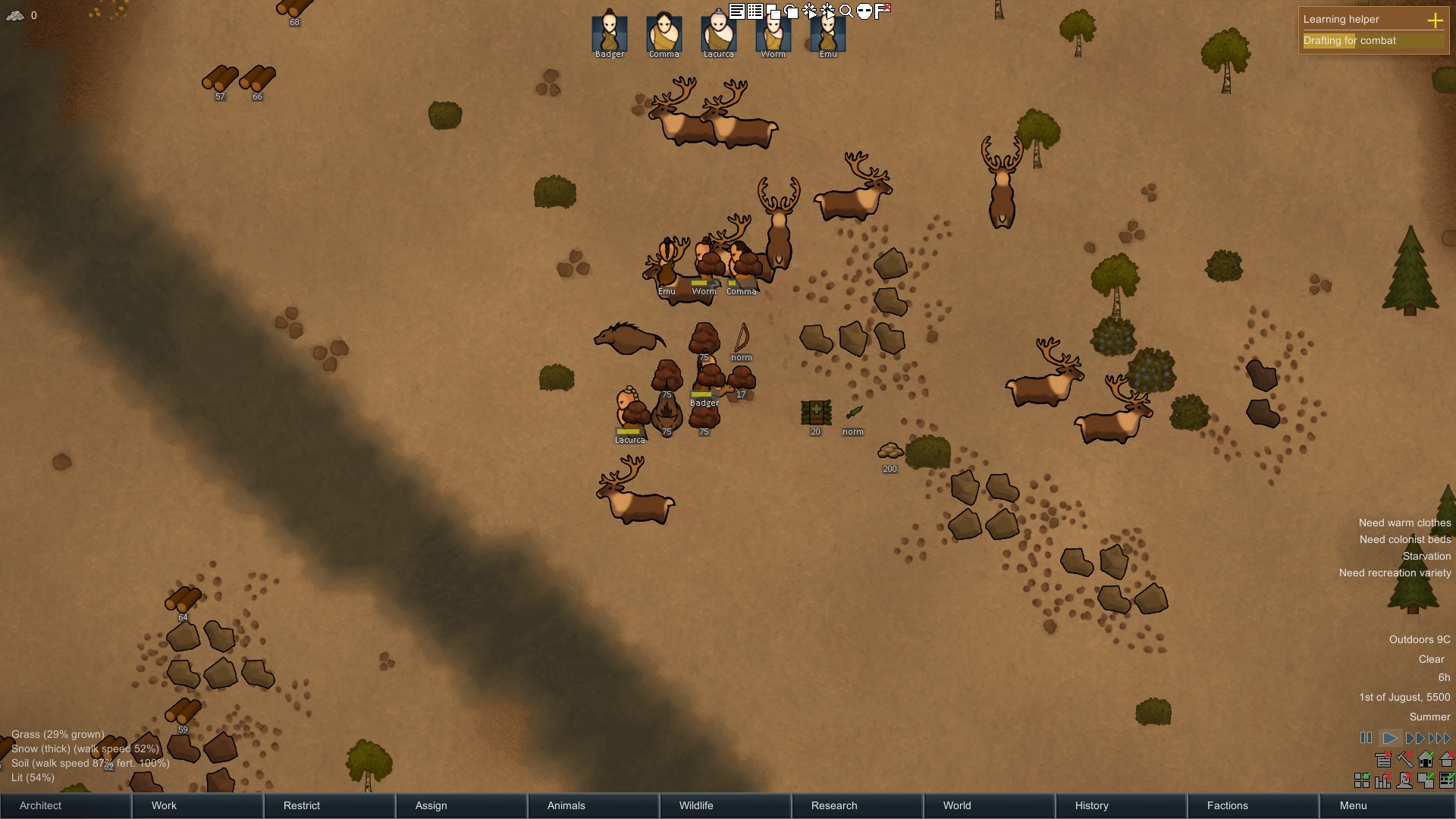 You wouldn’t have thought that a game about space colony survival would also double up as an incredible simulation of nomadic stone age animal herding, but it really does. For this scenario, you’ll want to crank the stat multiplier for “research speed factor” down to ten percent (so that things stay fairly neolithic), then engineer a tribal start with five people, some basic supplies and ten caribou. Your goal is then to move from the world map’s southernmost bit of tundra, to the northernmost, having at least a male and a female caribou alive at the end. And that’s it! It’s a tough but rewarding playthrough full of tough decisions - do you butcher an animal or two when things get lean? Do you build up a big food store to overwinter in the tundra, or go hell for leather to reach a milder climate? What happens if a pod full of futuristic megadrugs falls from the sky? The fate of the herd depends on your wise judgement. 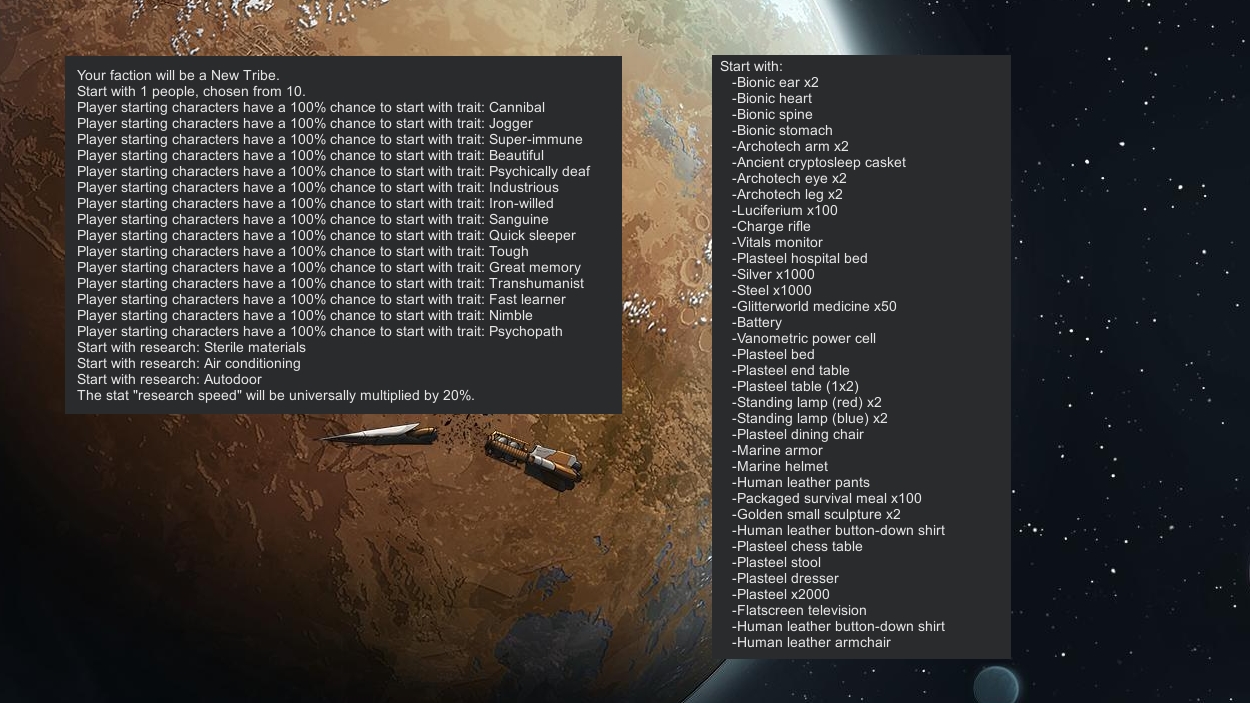 Inspired partially by Jukka Sarasti, the chilling (but weirdly believable) space vampire in Peter Watts’ Blindsight, this scenario sees you start with a single, impossibly powerful Horror Man, who must then build up a settlement of human cattle to protect, serve, and occasionally feed him. For Space Dracula himself, you’ll want a lone colonist who’s predetermined to start with virtually every positive trait in the game - but also cannibalism and luciferum addiction (space dracula loves space drugs as well as blood). Give him a pile of endgame kit, a few starting rations, and a stack of luciferum - but don’t let him do *any work*. You’ll have to wait for a wanderer or a captive to become his first Familiar, and do everything for him. Build up a squalid settlement of Familiars devoted to maintaining Space Dracula’s way of life - but if he runs out of human meat, it’s time for a sacrifice. Better hope the raids keep coming. The scenario’s goal is to have the Familiars build Space Dracula a ship offplanet with space for one passenger, thus freeing themselves from his tyranny. 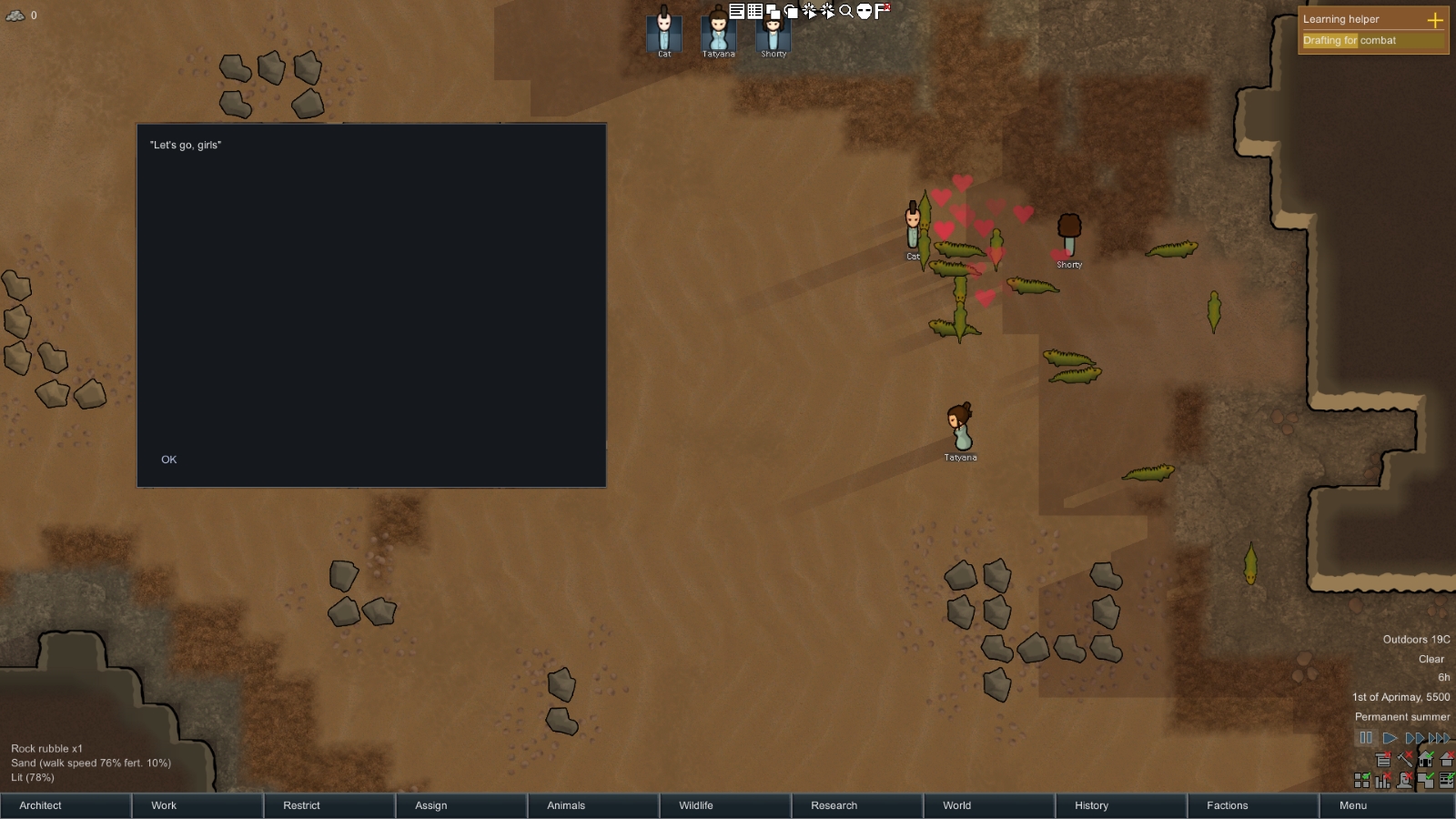 For this scenario, you’ll need an extreme desert mountainous start, enough food and kit to dig into the mountain and seal it up against the heat (you might want to turn off those annoying bug infestations), and a lot of iguanas. Your initial colonists should be all women, and they are welcome to recruit anyone else they like for their settlement, on one condition: no dudes. Men are either turned away, depending on how merciful you feel, or beasted on sight and fed to the iguanas. Ideally, your colony should eventually subsist entirely on iguana eggs. The endgame here is up to you, but in this scenario, the journey is its own reward. You’ve got a fortified desert citadel full of warrior queens, armed to the teeth and devoted to maintaining a cavern full of man-eating lizards. It’s a good time. 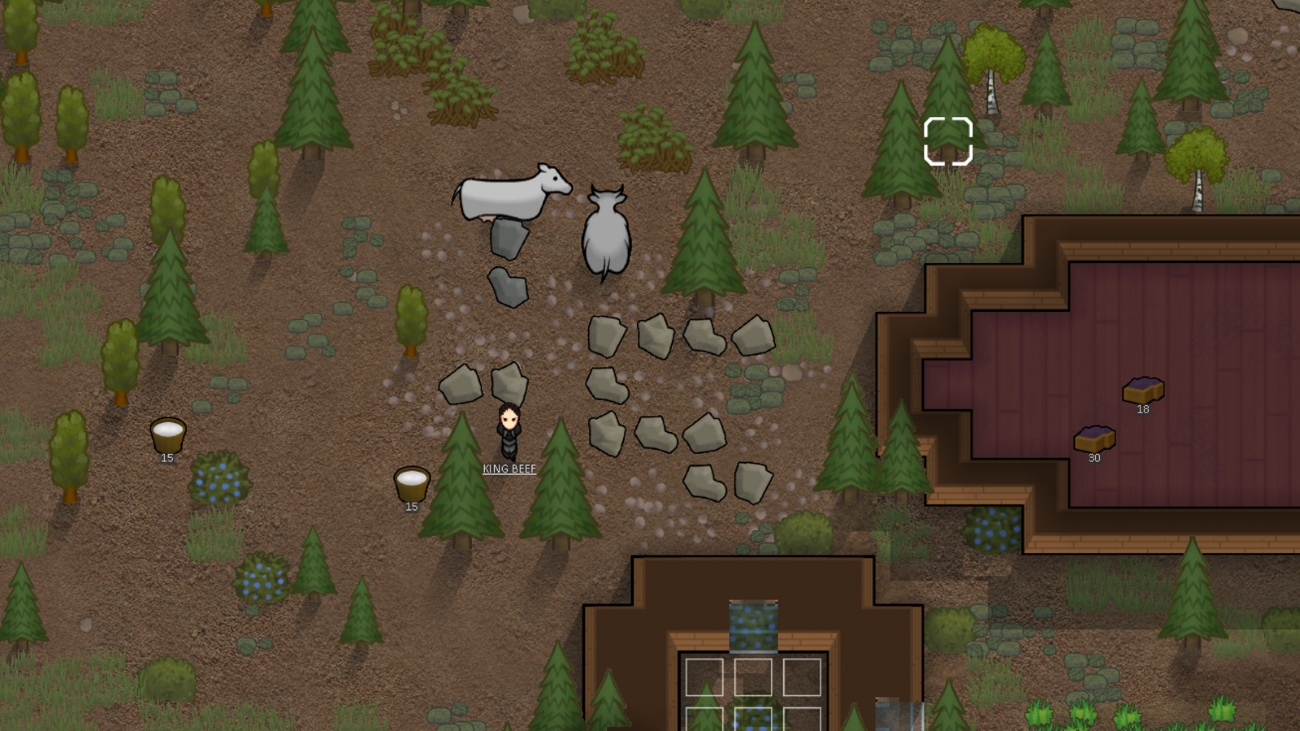 In this savage tale, you’ll want a single colonist again, but he’s a bit different from Space Dracula. He should start with the staggeringly ugly trait, as well as every possible trait that boosts his ability to survive fist fights, every trait that makes him hard to live with, a suit of uranium platemail, and a breeding pair of cows. This is King Beef, and he’s on this planet for one reason alone: to stockpile beef. The aim of the scenario is to acquire and freeze as much beef as possible before you die, with the final total acting as your high score. To boost King Beef’s chances, use the scenario stat multipliers to make projectile weapons completely useless, so he can beat all invaders to death with his hands. You may choose to allow wanderers to join and serve as Squires of King Beef, but be warned: the man himself should be as despicable as possible, and it won’t belong before they, too, fall to his immense uranium fists.

5. Last of the Summer Space Wine 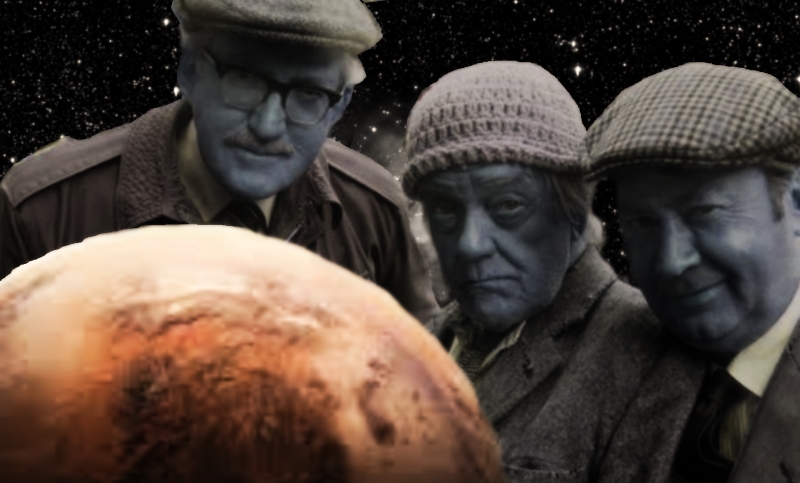 I haven’t actually tried this one yet, but it’s next on my list, so let me know if you have a go first. The concept is that you’re a squad of extremely elderly space soldiers who’ve gotten tired of the Space Wars and chosen a disastrous retirement plan: a world where everything bad happens at once, one day every year. Your eight colonists should have a minimum age of 60, a good set of military kit each, and enough starting resources to get themselves bunkered up quickly. The game should be utterly stacked with recurring disasters - storms, meteor impacts, maneating animal stampedes; however much you feel is just about survivable - set to occur simultaneously every 60 days. How many rounds of this will your War Pensioners survive? Remember - they’ve been fighting as a squad their whole lives, and they won’t accept any outsiders joining, so once your last soldier dies, it’s all over.

That’s all for now - let me know if you’d like to see any of these in action as a diary piece, and feel free to chime in with a scenario of your own, if you’ve got a classic!