If you click on a link and make a purchase we may receive a small commission. Read our editorial policy.
Developer: Cyanide Studio
Publisher: Focus Home Interactive

In the last five years alone, there have been four video game adaptations of the Warhammer 40,000 spin-off, Space Hulk. Plenty of chances to get it right, you’d think, though the first three attempts suggest otherwise. And here comes Space Hulk: Tactics, once again throwing gruesome Genestealers against stompy Terminators in derelict spaceship corridors. It’s not quite a combo-breaker, but it gets very close.

I caught the 40K bug hard with the launch of 8th Edition, filling my flat with paints and models and increasingly elaborate polystyrene battlefields. I’ve also gained a new appreciation for the tabletop spin-offs and video game adaptations that strip away a lot of the obstacles inherent in setting up a regular battle - the time, the exorbitant costs, the hassle of clearing away all the crap on my dining table. 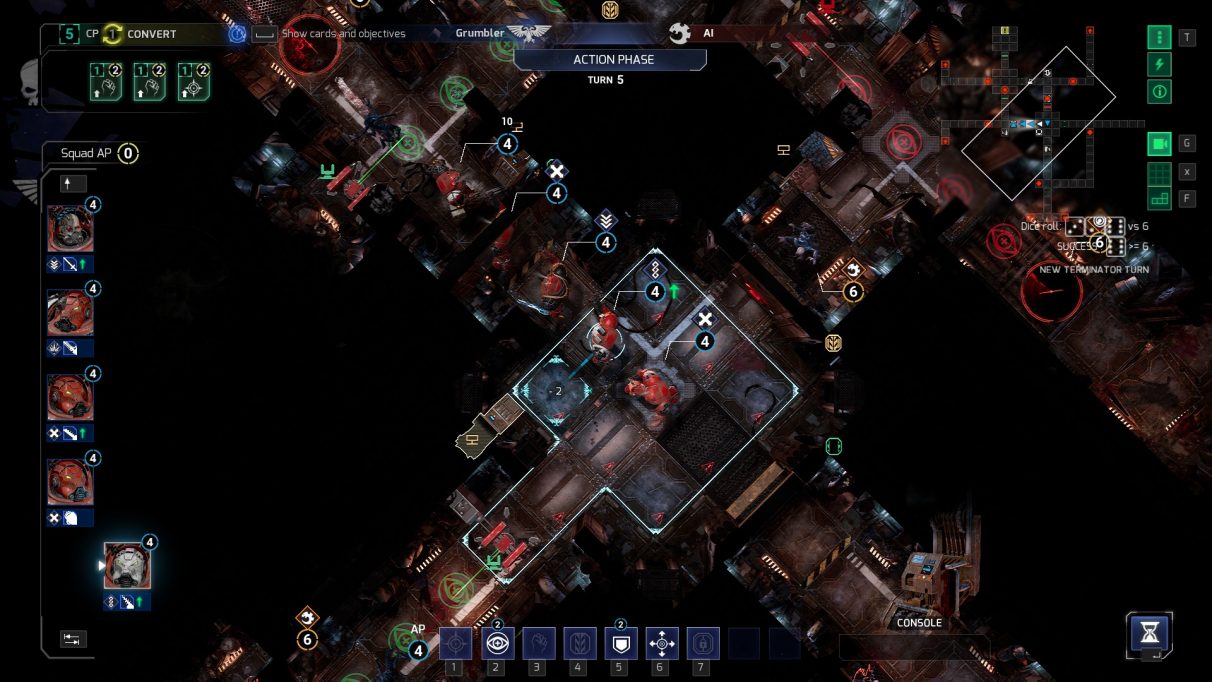 Space Hulk: Tactics should be right up my street, then. Like its progenitor, it’s a straightforward, asymmetric, turn-based brawl with one player methodically advancing through tight corridors and small rooms, trying to complete missions, while the other relentlessly assaults them with hidden squads of terrifying alien monsters. It’s not so much a battle as it is a nightmarish journey through dead ships, all horror and tension.

While Space Hulk (2013) made Genestealers playable in its cursory multiplayer, the aliens have been largely overshadowed by the Terminators in previous games. It’s not surprising: Space Marines always get all the attention. They missed a trick, but not Space Hulk: Tactics. The Genestealers and Terminators both get their own campaigns, while various chapters and hives can be set against each other in multiplayer skirmishes. It’s the first Space Hulk since a 2005 mobile adaptation that I didn’t know existed until now to put them on an equal footing. 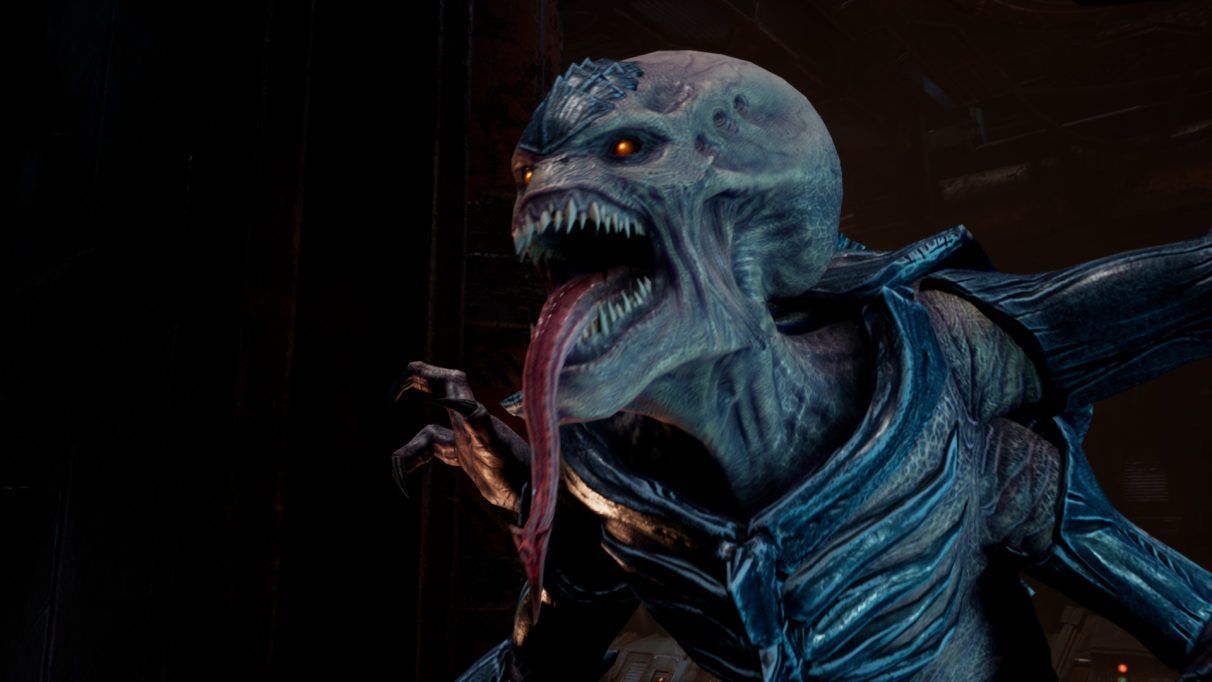 Both campaigns can be played right from the get-go, but as a boring Space Marine player, I went with the Terminators first. They’ve been brought in to stop one of the titular Space Hulks from crashing into a Forge World with the help of the Adeptus Mechanicus and the Ordos Xenos alien hunters. There are a lot of talking heads, and a big chunk of it will be largely indecipherable unless you already have at least a passing familiarity with Game Workshop’s grimdark universe.

Plot missions and random encounters are loosely connected via a no-frills campaign map full of paths that end up being mostly linear. There’s just a hint of RPG-like exploration and party choices, but it’s all so underdeveloped that it barely even feels like a prototype. The squad moves one node at a time, and only rarely is there anything on them. Occasionally, a locked door will bar the way, but keys are always clearly marked and can be picked up without having to overcome any obstacles. The only thing a locked door achieves is making the uneventful campaigns even longer. There’s also something about a whole squad of incredibly powerful super-soldiers backtracking to find a piddling little key that doesn’t sit right with me, especially when they seem to be perfectly capable of unlocking doors mid-mission. 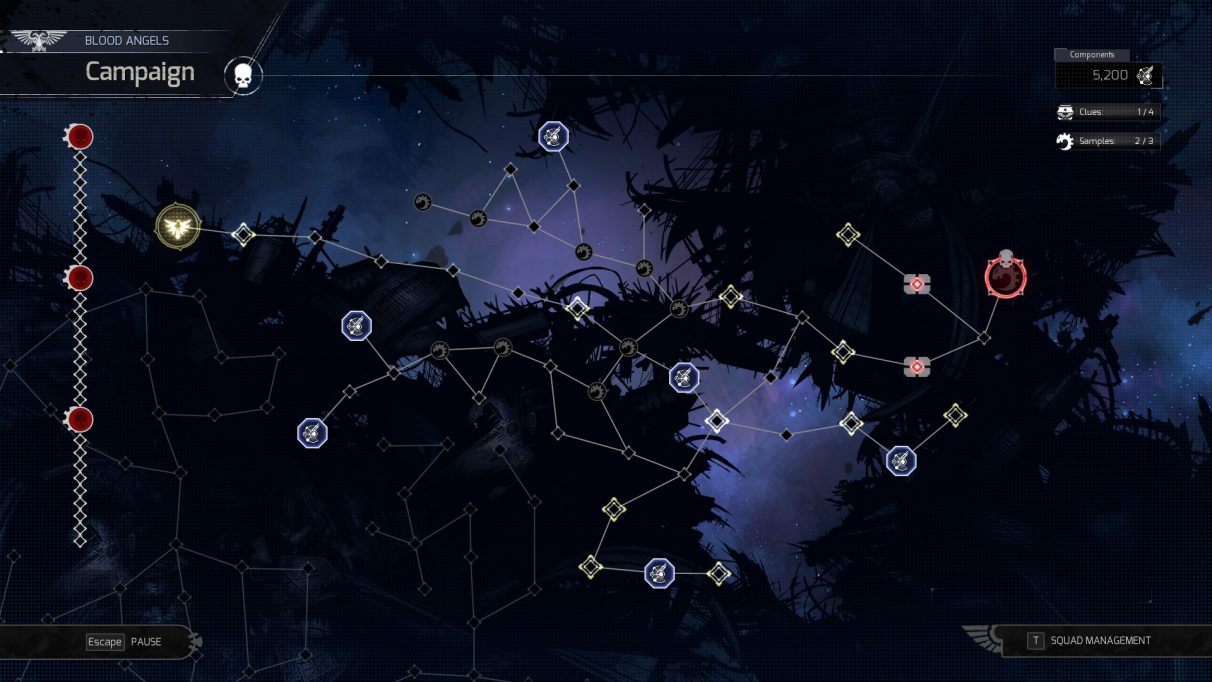 Other nodes contain resources that can be spent on upgrading the squad, random battles and, at the end of each journey, a story mission. Those last two things are all you’re going to care about, and everything else really just gets in the way. The missions themselves already contain both resources and narrative moments, so there isn’t anything on the campaign map that couldn’t be thrown in the bin. Thank goodness, then, that there are plenty of fights that break up the monotony of traipsing through this tangled mass of ships. And they’re good! The missions stick closely to the tabletop game, though Cyanide has also developed a card system that slots neatly into each turn. I was a wee bit worried that it would weigh the game down, like the campaign map, but it’s turned out to be a more than welcome addition that significantly expands what you can do each turn, without being obtrusive.

It’s the will of RNG, not the Emperor, that determines how confrontations play out, and RNG is even more fickle. You might confidently order one of your Terminators to batter a Genestealer, only for the bullets to bounce off their carapace or miss entirely. If it’s a melee attack, the Genestealer might turn the tables on your hapless Space Marine, leaping onto their chest and ripping through their armour. Equally, it could all go very poorly for the Genestealer. They’re both immensely strong and deadly, but all it takes is one hit and one bad roll of the dice to put them in the ground. It’s the source of a lot of Space Hulk: Tactics’ tension, but it can also be a source of frustration. Command cards maintain the former and greatly reduce the latter. 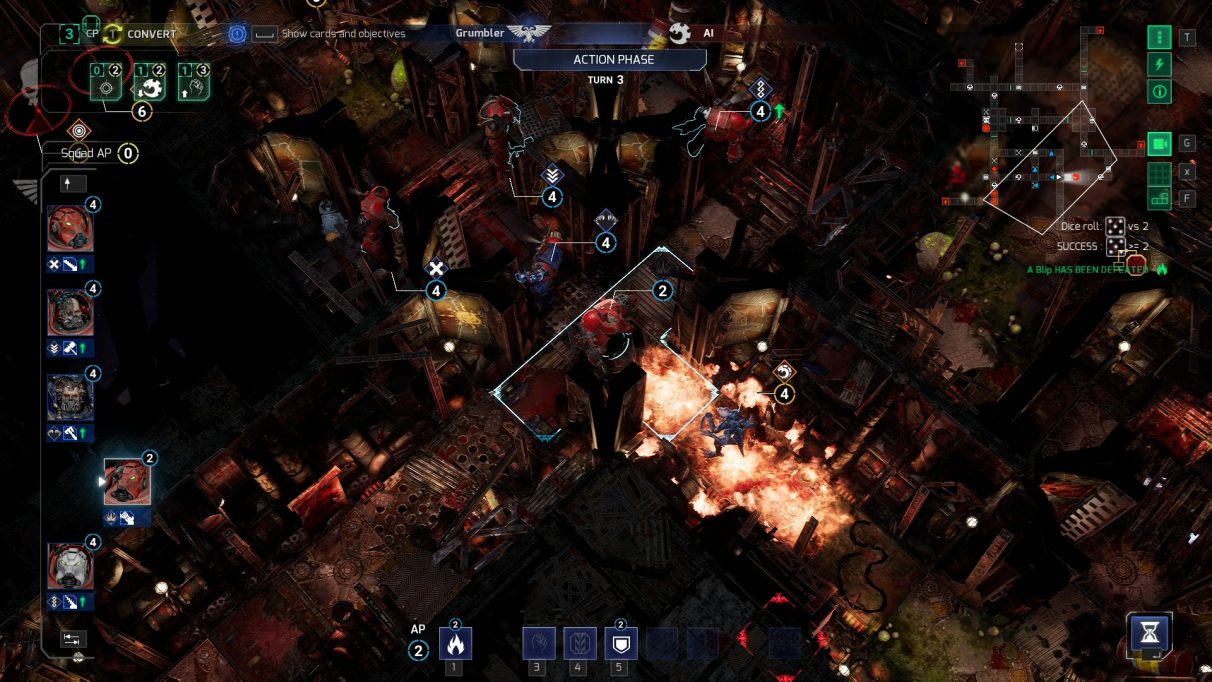 When an enemy is in your line of sight, you’ll see your chance to hit displayed as a percentage, and the base chance is usually pretty low. This is a game where you’ll be happy with 50/50 odds. You can leave it all up to fate, or you can play a card that increases your chance to hit. The cards are a limited resource, however, and can only be played once a turn, leading to some ruthless decisions about who to buff and who is potentially going to be turned into Genestealer chow. Alternatively, you could burn the card, gaining extra action points that could be spent on locking a door, activating a turret or moving out of the way. You can unravel a whole Genestealer assault with a couple of action points.

Even with the cards, there are plenty of ways for a simple walk down a corridor to go gloriously and disastrously wrong. All it takes is for one Terminator to go down, one door left unguarded, for the Genestealers to swarm. They’re a lot more cautious early on, to the point where they don’t act like Genestealers at all, but they grow more aggressive as the campaign progresses. With their larger pool of action points, they can close gaps in a flash, quickly putting an end to the Terminators’ ranged advantage. 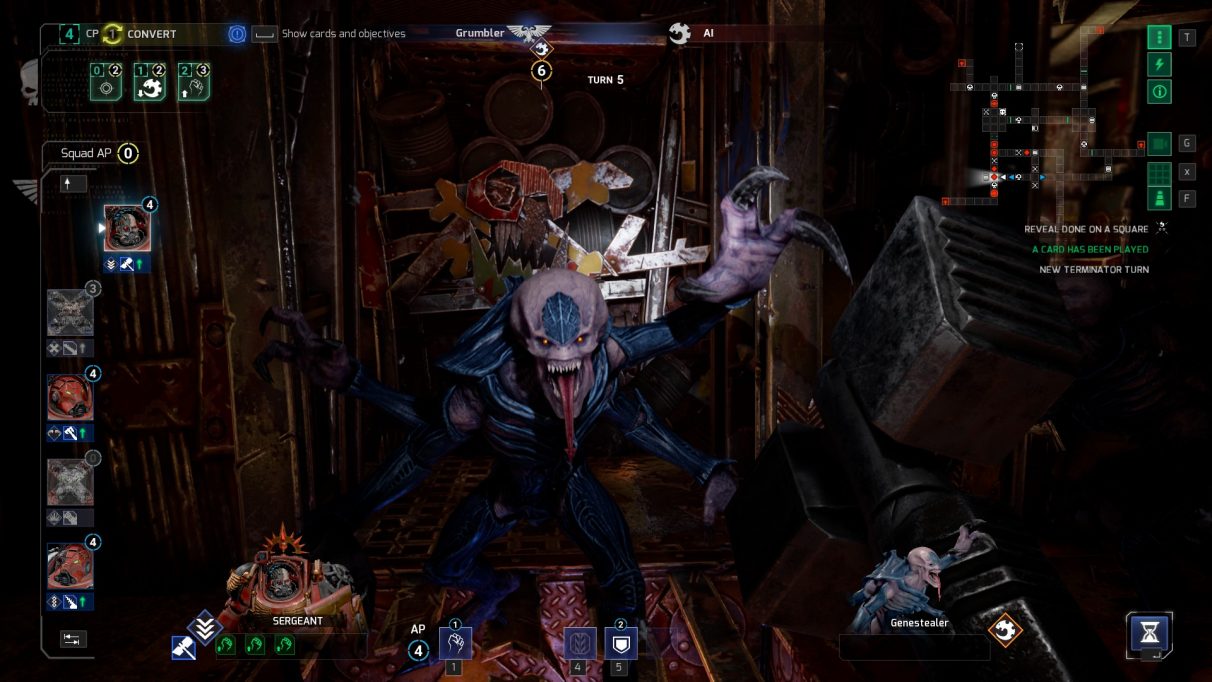 Scarcity makes every move precious. Unless you burn a card, the Terminators only have four action points each, and even turning around reduces their supply. Do you push forward, towards the objective? Wait out the Genestealers by hunkering down in a room and using overwatch? Depending on who is in your squad, your choices will vary. Throw in your flamer guy and you can bathe corridors in flames, while bringing a Psyker along with you will let you block areas off, reveal Genestealers and buff other Terminators.

There are a lot of adjectives that could be used to describe Terminators, but the one that developers really seem to fixate on is “slow”. The Terminators are tanks on legs, so they're not exactly nippy. Much like the tabletop game, this is reflected by them having fewer action points than their alien counterparts. With the exception of Space Hulk: Deathwing, which was an FPS, the last few adaptations have also forced us to sit through long, drawn-out animations. Every movement is glacially slow and stilted, and there's no way to skip it. 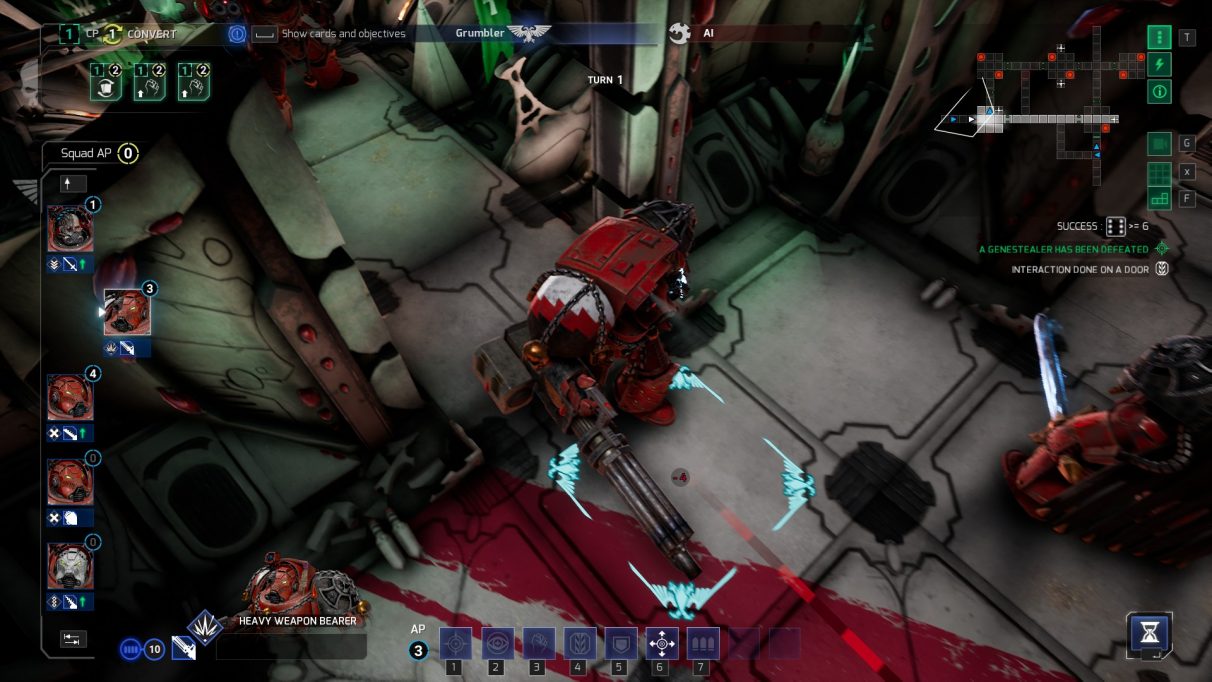 All the action-packed and nail-biting moments are separated by long stretches spent staring at these giant Space Marines lurching through corridors, even if you’re playing as the Genestealers. Just because Space Hulk: Tactics can simulate the speed of the Terminators, it doesn’t mean that it should. It’s a problem that just doesn’t exist in the tabletop game, but video games keep introducing it. Cyanide does have plans to speed up the pace, however. That’s great news, as the sluggishness undermines the otherwise exciting missions.

Playing as the Genestealers is a completely different experience. While the Space Marines are busy trying to complete their objectives, you’ve got to stealthily surround them, trying to keep out of their line of sight, right up until you’re ready to close the net. It’s empowering because you’re fighting on your home turf with plenty of reinforcements, and you always know exactly what the Terminators are doing. Get caught out in the open, though, and there’s a good chance your sneaky alien pals will be riddled with holes. 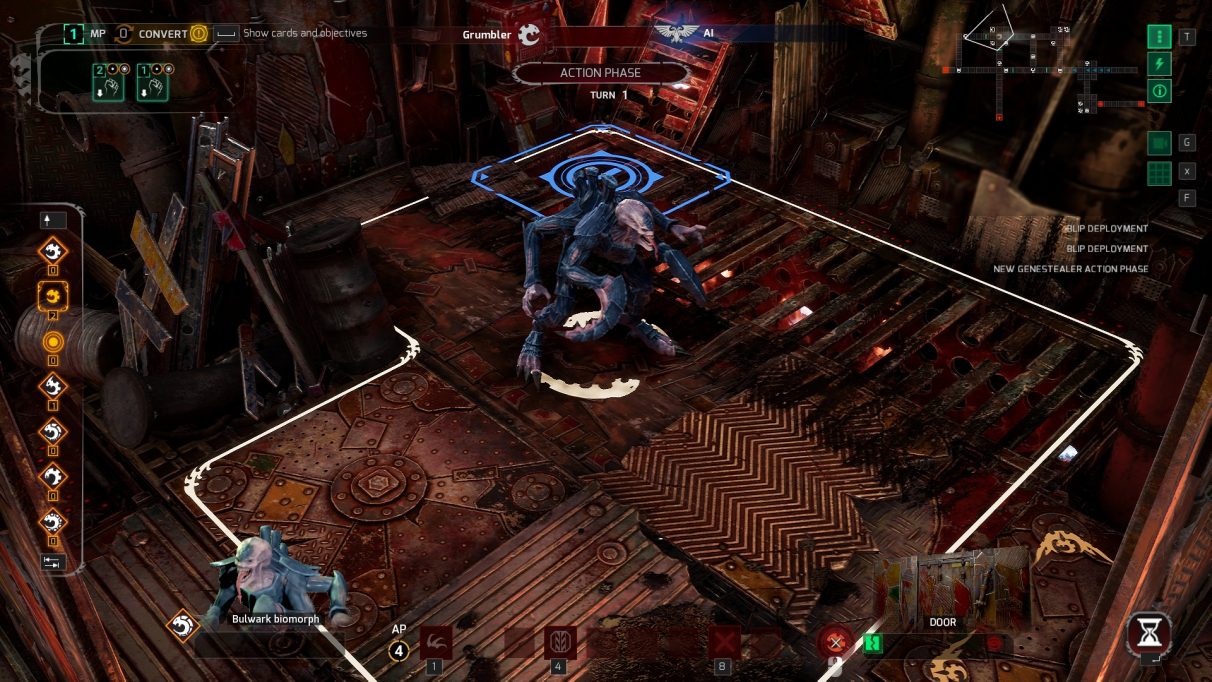 Genestealers use cards differently, too, burning them to bring in new alien pals instead of getting more action points. Every turn, the Terminators risk losing one of their own, but the Genestealer swarm just keeps growing. It’s excess rather than scarcity, all directed towards the simple goal of slaughtering the fleshy humans hidden inside their tin cans.

When I’m controlling my alien swarm, I feel more like a GM than just Player 2. The Genestealers are almost part of the environment, slinking around the Space Hulk as red blips - evoking Alien’s scanner - until a surprised Terminator happens across one. I’m plotting, manipulating, using decoys and sacrificing my pawns to create a deadly trap for the humans. Not a very nice GM, then. 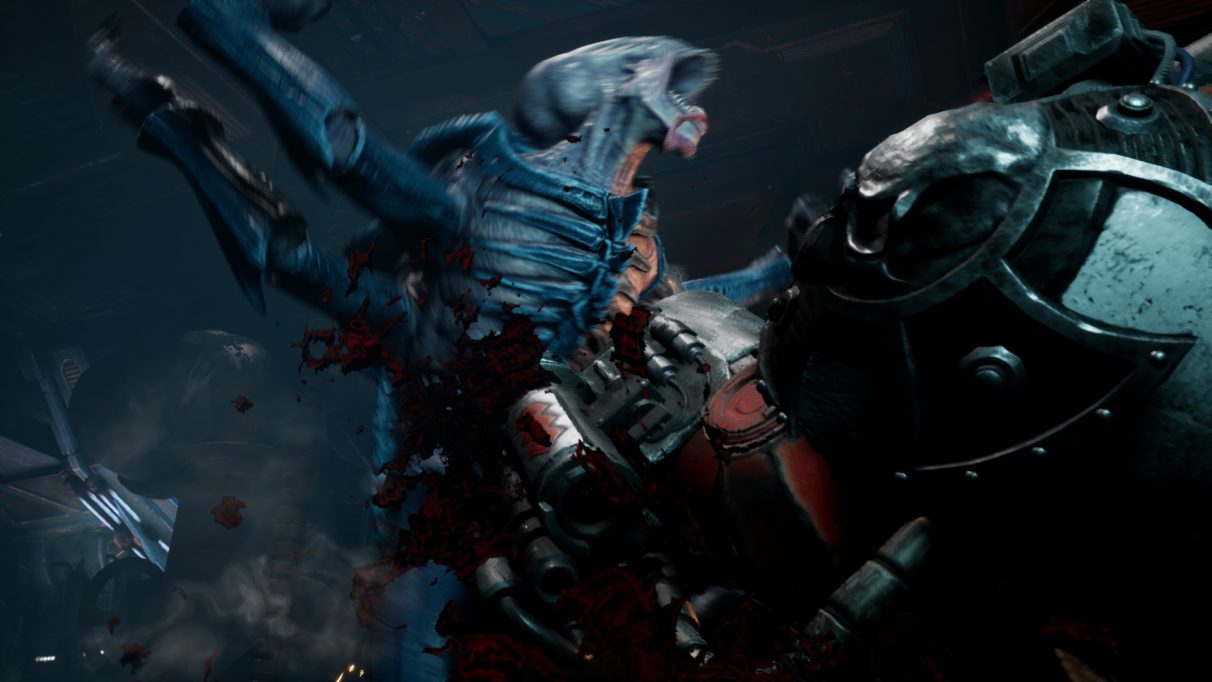 Their campaign is even more straightforward than the Terminators’, amounting to a string of missions with very little faffing in between. I actually prefer it, despite it being less developed. It throws you straight into the good stuff instead of cramming in half-hearted nods to RPG-like exploration. Best of all: no backtracking!

Beyond the campaigns is a skirmish mode supported by a meaty mission editor that lets you make brand new maps from scratch - this also means that there are loads of missions already available, created by Cyanide and the community. To tackle these missions, you can put together custom squads from different Space Marine chapters and Genestealer hives, so if you fancy pitting some burly Space Wolves against Leviathan Broodlords and biomorphs, knock yourself out. 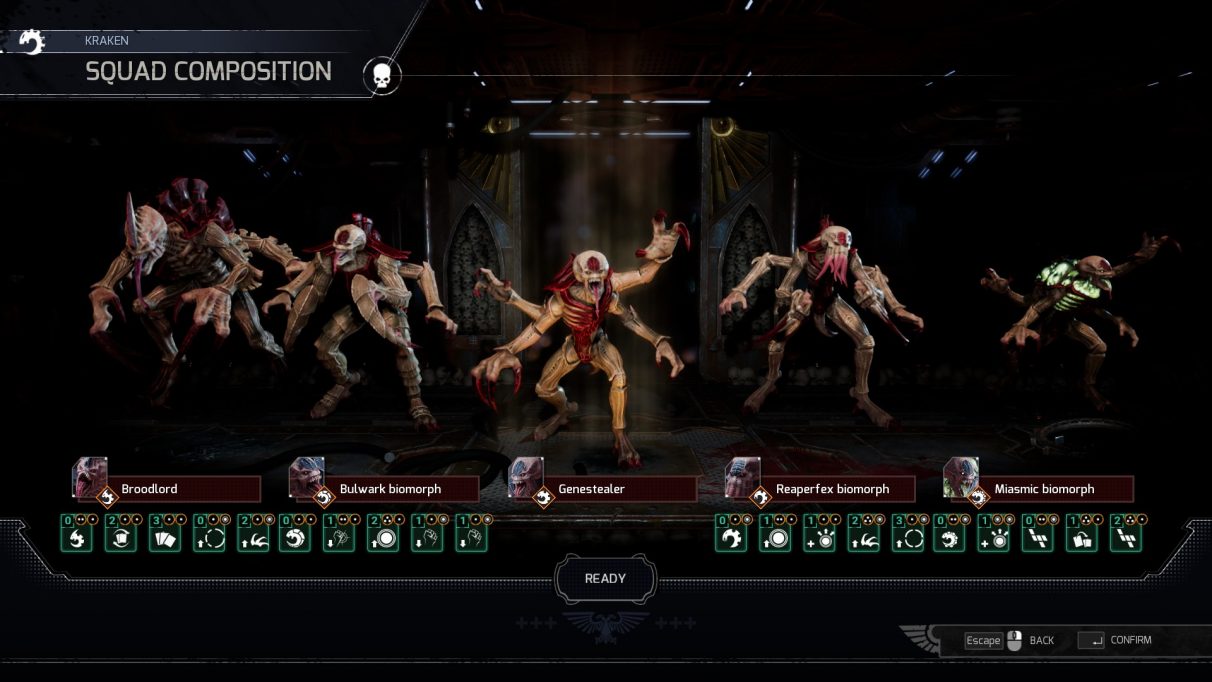 It’s frustrating that for all the improvements, Space Hulk: Tactics still trips over the same things as Full Control’s Space Hulk and Space: Hulk Ascension. It’s too slow, and the interface is far too fiddly for a game that punishes even tiny mistakes. I’ve wasted more action points than I can count just because I clicked on a Terminator and rotated him by accident. The maps are also pretty hard to read, though they are considerably more legible than their predecessors. A scanner highlights things like doors and consoles, but wouldn’t it be nice if it was easy to parse without additional modes?

In his review of Space Hulk: Ascension, Adam called the sequel “two steps forward and one step back”, and history has unfortunately repeated itself. Tactics is absolutely the better Space Hulk game, but there are a lot of caveats getting in the way. I’m keeping my fingers crossed for the speed update, but in the meantime, there are too many great tactics games kicking about to waste time with these ponderous Space Marines.