When someone says the word ‘roguelike’, the first thing that’s likely to pop into your brain is a crushingly hard button twiddler like Spelunky, The Binding Of Isaac or Risk Of Rain. Sparklite, however, wants to do things a bit differently.

This upcoming brawler adventure game, from North Carolina outfit Red Blue Games, will be joining the roguelike ranks when it comes to PC later this autumn, but the studio’s twin brother co-founders Lucas and Edward Rowe, would really rather it wasn’t called a roguelike at all.

“Some of the media coverage we've had where people said it was a roguelike, we're like, ‘Uggghhh, we're not really like that,’” the Rowe brothers tell me at PAX East 2019. “We call it an accessible roguelike game. We’re trying to make it, like, fun and not too harsh in a way that a lot of roguelikes have a reputation of being – that’s not the idea at all. We’re trying to make it fun for everyone and have everyone be able to play it.” To help it achieve that goal, Sparklite is drawing on one of gaming’s big nostalgic grand daddies, The Legend Of Zelda.

Indeed, you only need to take one look at Sparklite to see which Zelda game it’s harking back to. With its top-down perspective and bright, colourful sprites, Red Blue Games are going full A Link To The Past here. I mean, it even begins in a storm for crying out loud, with a mysterious voice that calls out to your intrepid explorer Ada. She crash lands on a new, uncharted continent that shifts and changes shape every time you die. This is one connection the Rowe brothers are happy to acknowledge. 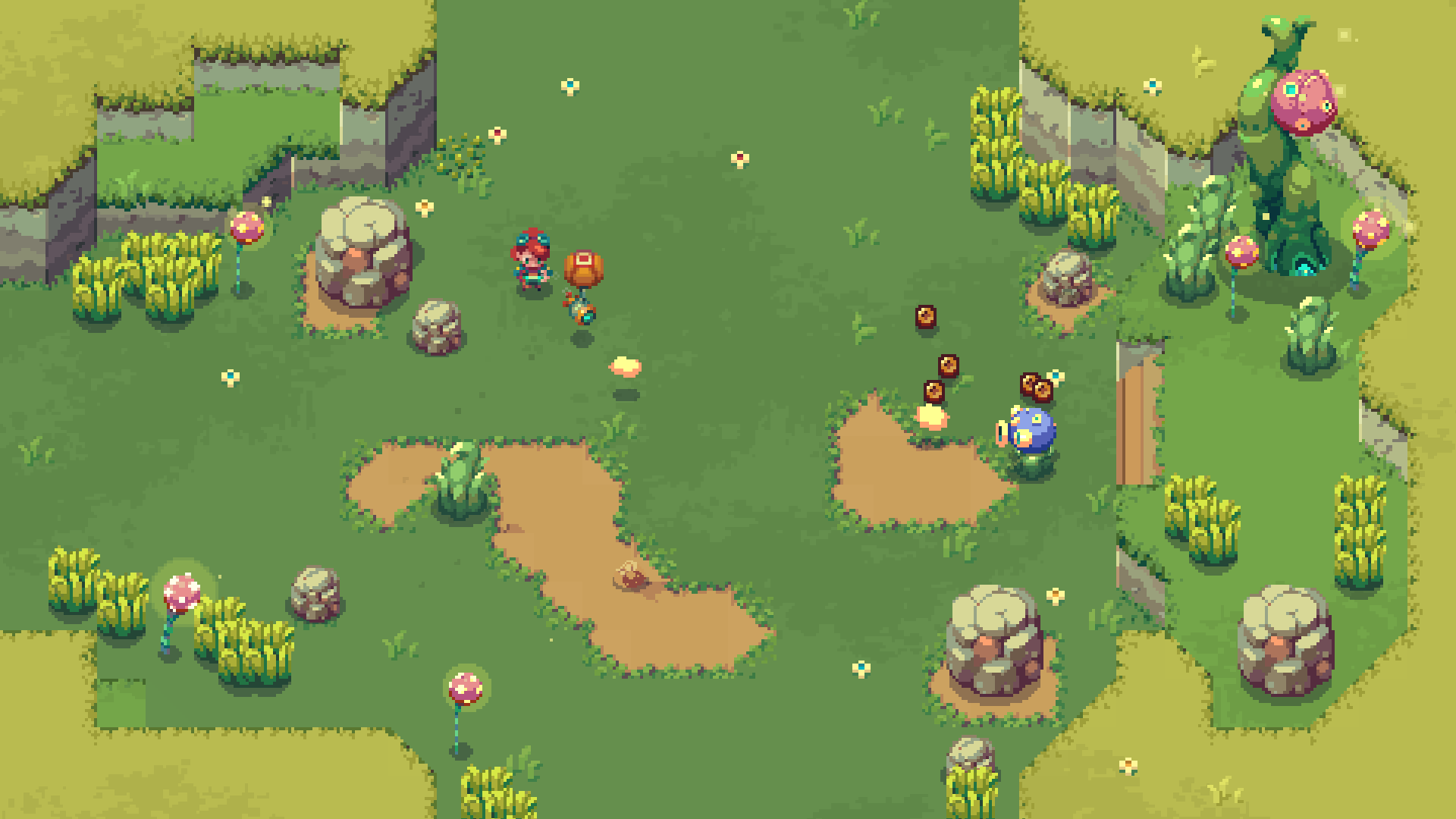 “Ed and I played every Zelda game together as kids and it was this collaborative and unique experience. We’d love to replicate that,” says Lucas. “When we were designing encounters, we just channelled this thing that was often from the experiences we had from when we were younger. The feeling of Zelda, the spirit of Zelda is what we're going for, and I think it has a very universal appeal.”

Take the RC Blimp, for example (pictured above). This is one of Sparklite’s ‘widgets’, power-ups that Ada can find scattered around each of the game’s five procedurally generated biomes. While functionally similar to Zelda’s bomb, in that it can be used in combat as well as to open up other areas in the environment where your trusty wrench-like hammer simply won’t do, you’ll never find the pickup in the same place twice, giving each expedition its own style and feel when you go down to the mainland.

Widgets also consume energy, which can only be recharged by using regular attacks, and thus limiting how many times you can use one. You’ll eventually be able to unlock widgets permanently by spending the game’s titular Sparklite currency on proper blueprints back in town, but you’ll still need to find their prototype first, which hints at a more organic style of adventuring than its 16-bit source material. 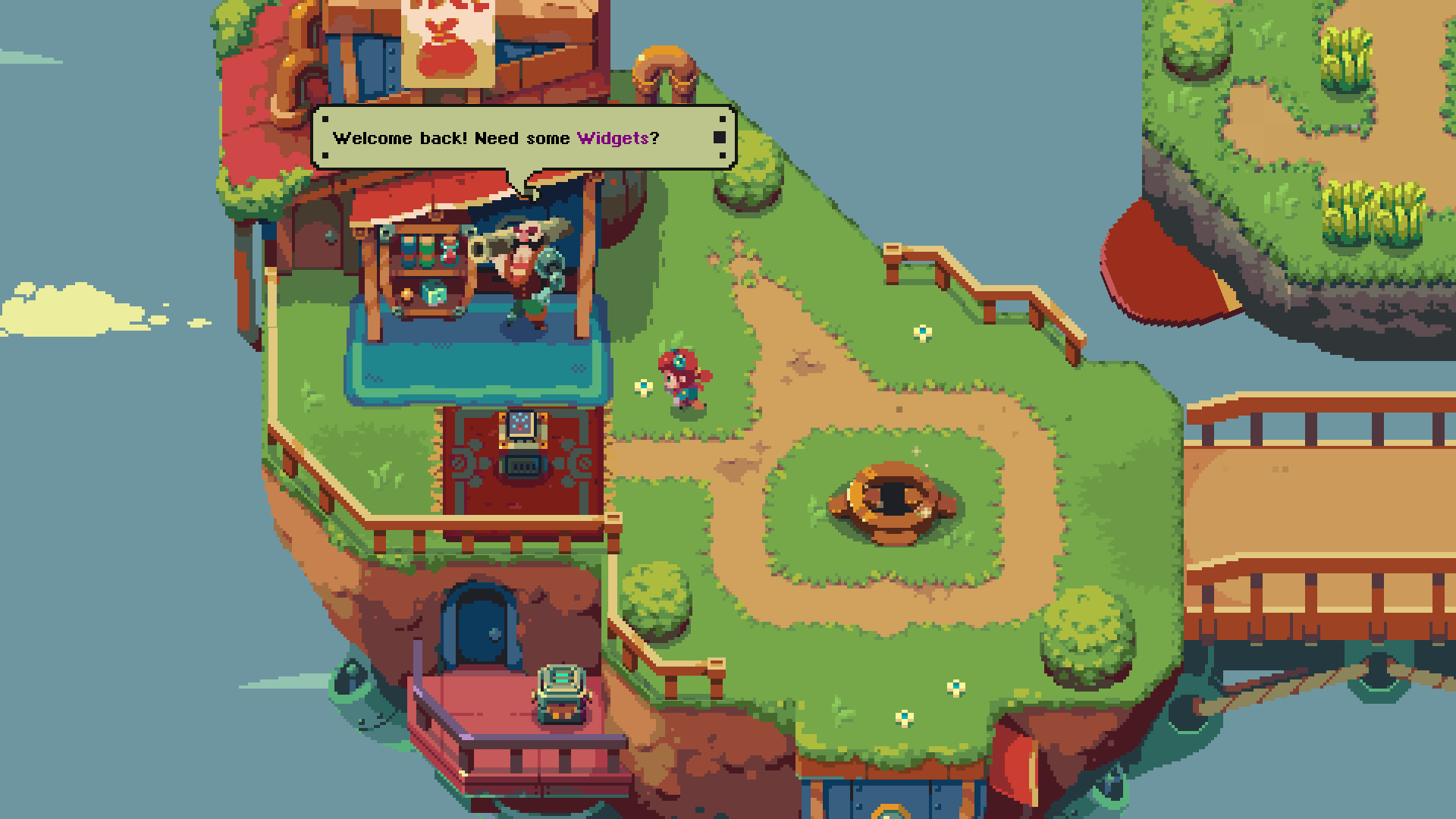 “We want every run to feel different,” says Edward. “That’s something we’re really trying to do, and there are aspects of the roguelike genre that we really love, like FTL. When you pick up a game, you’re not necessarily committing to a 60 hour adventure. It's usually 20-30 minutes, or maybe two hours, and we love that aspect of it. And the thing about procedural is that dying liberates you, in a sense, you know? You're only committing to this one playthrough.

He also says that it frees you from learning the whole game. The comparison he uses is that when he plays Hollow Knight on the Switch it's usually only when he's travelling, which means there are four month breaks between his play sessions. "I can't remember where I was! So this is kind of freeing you of that. Just learn what you play.”

There will also be roaming NPCs who unlock further facilities back at base after you complete their quest lines, encouraging players to explore every last nook and cranny as they work to upgrade their settlement into a fully-fledged society. On my own demo travels, for example, I met Paulo, who was looking for his sister Margo. Find Margo and give her Paulo’s medallion, and they’ll both set up shop in town. 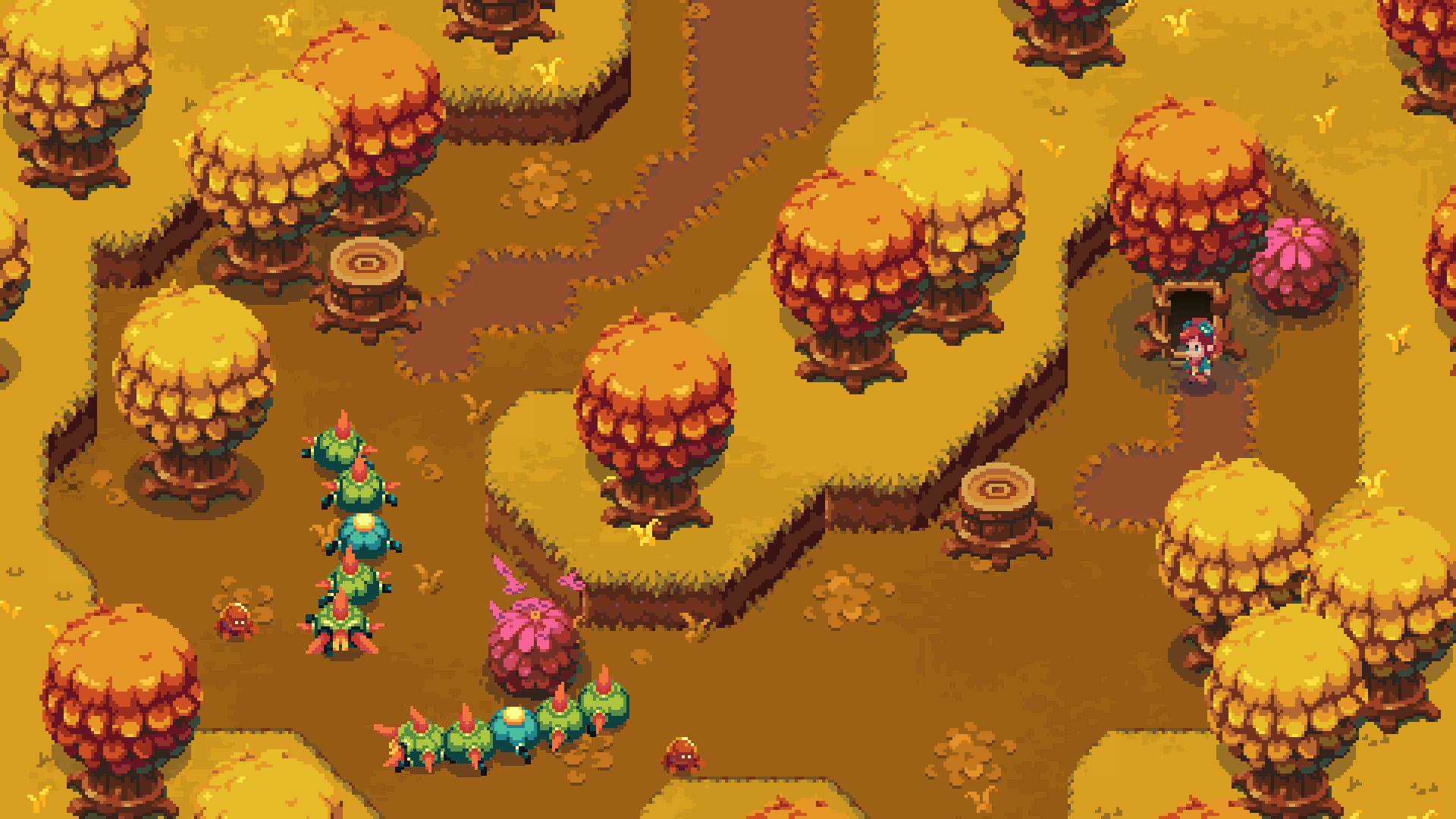 Sparklite still has plenty of bite to it, though. Just as you lose all your equipment on death, you’ll also lose things like Paulo’s aforementioned medallion if you don’t manage to find Margo in the same run. That means you’ll not only have to find where Paulo is again, which shifts and changes just as much as the landscape around you, but you’ll also need to find the right gear again to help you on your way.

Fortunately, the Rowe brothers have designed Sparklite’s augment upgrade system in such a way that it can cater for both turtling heart-hoggers and fearless speedrunners alike, giving players plenty of choice in how they approach tackling the game’s dangerous wildlife.

“It's a patch system,” Edward explains. “You buy these patches and put them on a 3x3 board. Some will be 1x1, but you'll also have 2x1 or 3x1 and they'll all give you different traits. We're not stopping you from completing the game from the start." In theory, the design makes it possible for every boss to be beaten on one heart, without upgrades. If you're good enough. “I mean, it's something we have to be careful about, but the idea is that you spend Sparklite and get stronger.”

The Rowe brothers hope their own children will be able to get in on the action soon as well. “Once you get your robot companion back, he'll have some gadgets as well, such as digging stuff out of the ground,” says Edward.

“So you'll have some gadgets, he'll have some gadgets and hopefully – we're still working on it – but I think I can practically commit to having co-op [and the robot] be playable by another player." Both the brothers have children, so they've designed the robot for a second player to allow children to play. The robot can't die, doesn't take damage, and just help the first player. "We're hoping to give him a horn that you can beep and make noises with, too, so they can play as soon as two-years-old.”

I’m not so sure about the horn idea myself, to be honest, but if Sparklite can kindle the same kind of unique, collaborative experience in the Rowe brothers’ children as Zelda did during their own childhoods, then I’d say that’s probably a job well done. I certainly liked what I played at PAX East, and its cheerful music, tight action and open-ended world were all definitely on their way to recapturing those heady days of sitting down in front of the SNES and noodling about the plains of Hyrule.

There are still kinks that need ironing out –- the build I played didn’t even have proper button prompts, for starters -– but if Red Blue Games can strike the right balance between playful adventuring and compelling challenges, they might be on the cusp of creating a legend of their very own.

Sparklite is currently set to launch in autumn 2019 on PC, PS4, Xbox One and Nintendo Switch.