On the surface, Sparklite is as generically, pleasantly roguelikelike as it's possible to get. You wander around randomly generated areas, clubbing baddies with a wrench and spelunking in sinkholes for treasure, before taking on big gits in caves. The story is bland as weetabix, there are secrets to be found everywhere, and there are helpful items that give you new abilities. The game is pretty good. But the thing that made it stand out for me - the thing that made it different - is the way it teased me with shiny new gadgets, and then snatched them away from me.

These bait-and-switch episodes occur in the game's temples. These act as tutorial arenas for each new gadget you encounter, allowing you to play with the item in question to your heart's content - so long as you don't leave the temple. The one that really stuck out for me was the temple containing a "Boom Balloon" - a flying machine packed with explosives, which could be sluggishly nudged by tapping directional keys, or boosted forward with a mouse click. Controlling it felt vaguely like playing Micro Machines, only with big, satisfying explosions rather than dull thuds on collision with things. Lovely stuff.

Once I'd finished experimenting with the murder zeppelin, however, I had to return it to the pedestal it came from, in order to leave the temple. Granted, doing this unlocked the ability to create the sub-components I'd need to assemble the boom balloon at my forge - but it didn't actually let me have my new toy! It made me bloody determined to work towards it, however, because my little test drive at the temple had shown me just what fun I would be missing out on until I had all the bits together.

Of course, this motivation would wither all too quickly, if the promise of the fun new gadgets was outweighed by the faff and frustration involved in saving up for them. But on this front, Sparklite is extremely well-balanced. While most roguelikes rob everything from you on death, the worst Sparklite does is give you a slap on the wrist, causing you to drop all the consumable items you've collected recently. The Sparklites, however (glowy blue ore crystal things, which the game's world runs on), stay with you between lives. It's a level of permanence comparable with Rogue Legacy, for want of a better comparison. 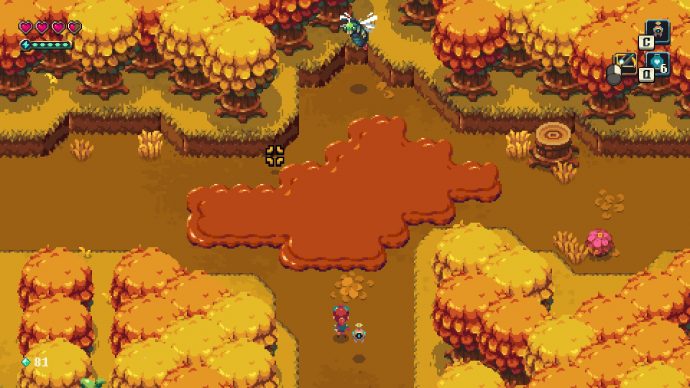 Provided you have ample Sparklites in your purse, then - and it doesn't matter how many times you die in the process of accruing them - you can realise the dream of creating your own Boom Balloons, or whatever other whizzbang delight you've found in a tutorial temple. Death will set you back in other ways, of course, but it won't stop you working towards the contraption you've got your heart set on. It feels very fair.

In fact, it took me a while to realise what else it felt like - that is, going to a toy shop as a child. Specifically, going to a toy shop with no Christmas or birthday in sight, and not an eight-year-old's grubby saved fiver to your name. The feeling of getting to play with a demonstration model for a few minutes, and then glumly having to leave with nothing. The feeling of saving pocket money for months just to get your hands on something. And then, the sudden deflation of your satisfaction when you finally go to the shop, cash in hand - and see a much cooler toy that costs twice as much.

Because of course, that's how Sparklite gets you - because, by the time you've finally got the wherewithal to get the temple toy you've had your heart set on, you will have found another temple, and settled on something you want more. And there you are again, back at square one, absent-mindedly using your now-dull zeppelin to help you accumulate sparklite in order to save up for your next object of desire.

If that sounds frustrating, be assured that it's not. Somehow, Sparklite goads the player into forging ahead with constant enthusiasm, purely on the strength of good ol' FOMO, and it's a downright lovely psychological loop to be trapped in.