Spiritfarer, the "cosy management game about dying", is full of many little acts of kindness.

"You can hug anyone, by the way," Nicolas Guérin tells me, during my recent hands-on preview. Guérin is creative director at Thunder Lotus Games, and Spiritfarer is a slight shift from their action games Sundered and Jotun. Death is a common theme, perhaps, but Spiritfarer is a much more gentle affair. I hug a little mushroom with arms and legs, who is the avatar of a seven- or eight-year-old boy. He leaps into my arms. It is very sweet.

Graham has already written comprehensively about Spiritfarer's themes. Inspired by the Ancient Greek myth of Charon the Ferryman, your role as big-hatted protagonist Stella is to gradually shepherd friendly animals towards their final farewell - to death. The whole game is at once metaphorical and literal, with each of the animals needing care and food, and asking for certain items before they're ready to move on. They will also each teach you a skill before they go, allowing you to better care for the other denizens on your ship.

It's the cosy management bit I want to talk more about than the death, though. This preview has much more of that on show than the version I played at Gamescom a year ago. Guérin's ship doesn't just have rooms for each of his passengers, but an orchard, two garden plots growing different plants, and two sheep. There are kitchens, a loom for weaving, a forge for smelting minerals, and a crusher. For crushing. 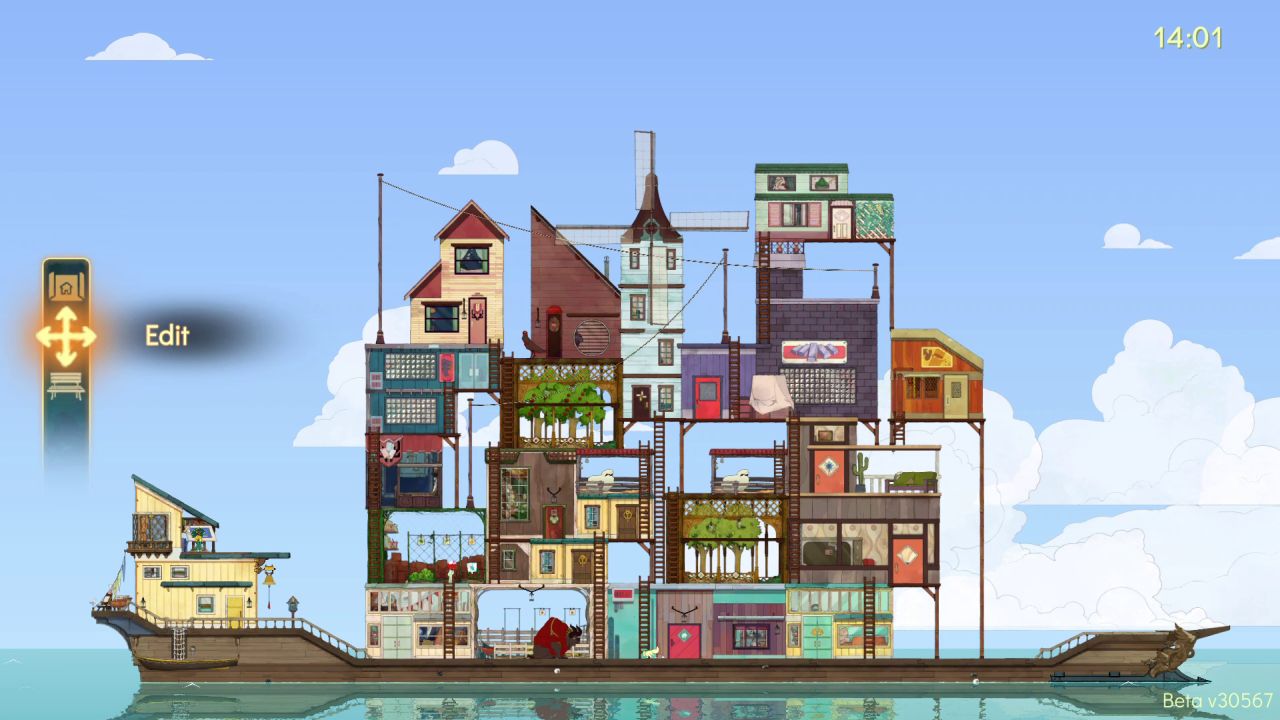 These facilities are stacked precariously on top of one another, in an odd little jigsaw of rickety stilts and ladders. Players Jenga all the rooms themselves, stacking them up to their own design. Your houseboat community may not be very aerodynamic, but it will be yours. And each element of it is important, including the crusher.

The little mushroom fellow, Stan, is hungry. "Try giving him any vegetable," says Guérin, with slight glee. I do, and Stan is distinctly unimpressed. All the characters have likes and dislikes that you come to learn. Guérin already knows, of course, that Stan's favourite food is french fries, which we can cook up in the kitchen. For that we need a potato, luckily already growing in one of the gardens, and sunflower oil. So we harvest some sunflower seeds, head to the crusher, and crush us up some oil for frying.

The crusher is a more simple machine than some of the others. Guérin says it was designed to be just a big smashin' machine, for when you need to smash something. Other types of crafting are harder. At the forge, we must feed the furnace coal, and then keep the fire at the optimum heat for the metal we're turning into ingots. The loom is a "press button at optimum point on slider" job. The precise timing involved in all these things will change, depending on the raw materials you're working with. And it's all just to fulfil the specific needs of each of your passengers. 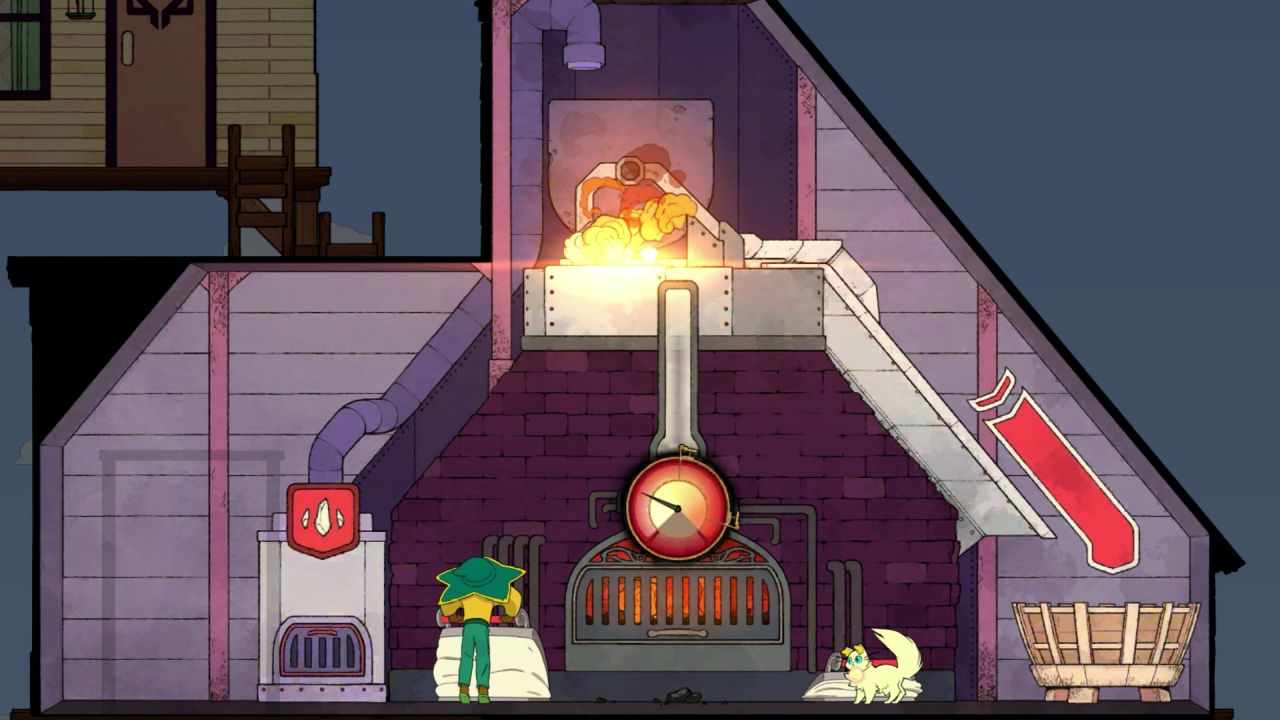 It's a lot of cosy management, in other words, and it's more than I was expecting. Guérin himself seems surprised at how big their game is, now they're nearing the end of development. But how does this crafting and growing and industry work alongside ferrying these people to their deaths?

As Graham pointed out in his preview, all your efforts are not to make money, but to look after your friends. Even the conventional platforming, the unlocking of double jumps and so on, is ultimately in service to this aim. You can play two player co-op, and the second player takes the form of an adorable cat (which you can also hug).

And a key theme, again both metaphorical and very literal, is that you have to let people go in order to move on. Once a character leaves, for example, their room on your ship grows a flower that represents the former occupant, and sometimes that flower will be needed in a task for someone else. Guérin says that the team was surprised to see how the two elements worked together - how the mundane, everyday tasks of crop-tending and cloth-weaving contrast with the sad parts to make them sadder.

After giving Stan his fries, we loaded an earlier save so we could see Gwen leaving. Gwen, a tall, elegant deer who is constantly smoking, is Stella's best friend. She helps you through the first part of the game - she is the tutorial character, almost - but she has a complex relationship with her parents, particularly her father, and her constant smoking is in fact the cause of her death. 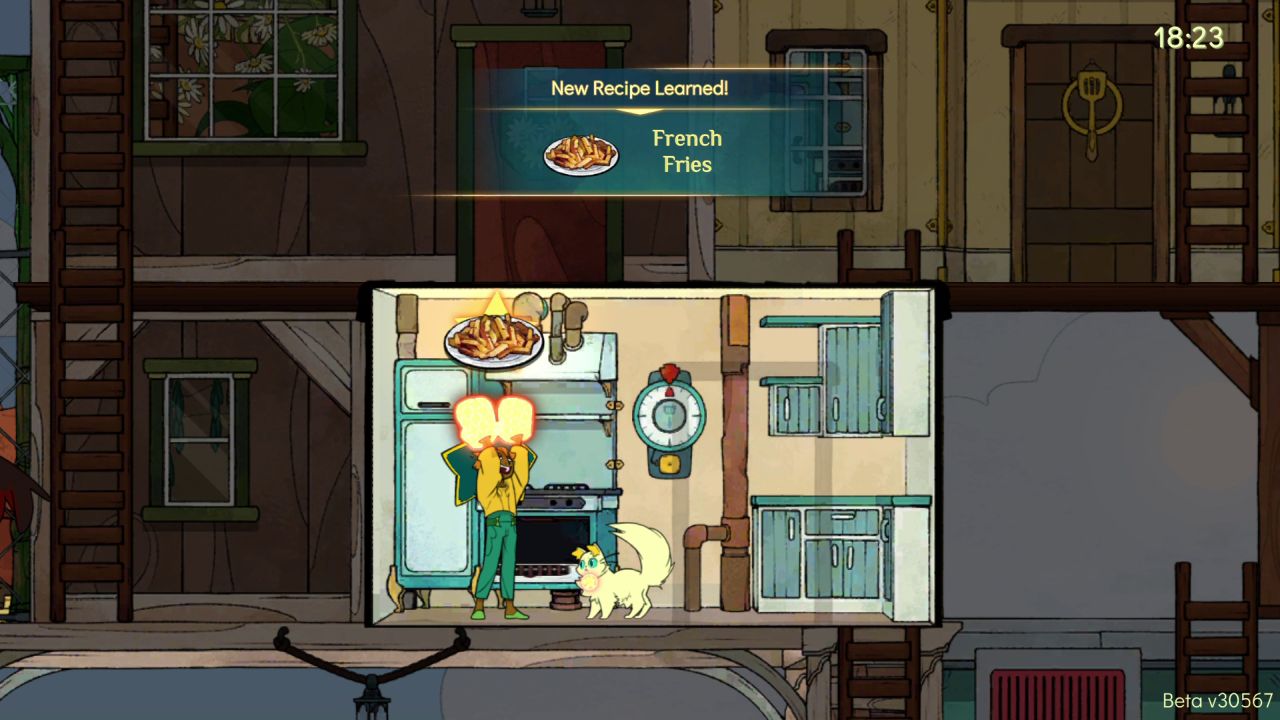 "I cry at these every time," says Guérin, as the cutscene starts. "Even if it's the hundredth time." We paddle Gwen along a still river, and on the way Gwen talks about her father, her feelings, being ready to leave. Guérin watches me closely, and when Gwen leaves he asks how I felt about it (I, stone-hearted, didn't well up).

Not all the endings are as peaceful as Gwen's, and Guérin says that in testing, players usually encounter one that really affects them. One character is confused at the end - she is unsure where she is, and calls the player character by the wrong name. Stan the mushroom is only a child. In many cases, the characters are based on real people that team members knew. There are two in particular who are based on Guérin's grandparents. "I was writing what I imagined my grandfather would say to me," he explained. "I locked myself away. I was crying for two hours."

The thing is that writing about the death of a child, or a woman with dementia, is something that could easily become trite, mawkish or possibly offensive - even if you're trying to transcribe experiences from your real life, because that is a very difficult thing to do. But in this case I am prepared to trust the developers, or to at least stick my fork in the sad, sad pudding with some gusto to try and find the proof.

I think Spiritfarer's success will be that it isn't patronising. It is a game explicitly about death and loss and moving on, but explores this in a slightly abstracted way. And the growing and tending afterwards doesn't seem like it will be trite. That cosy management aspect is just the business of living, isn't it?