Chris Hecker has been working on SpyParty for almost a decade now and I get the impression he'd be happy perfecting it for the rest of his career. Some developers want to move from one project to the next, an internal clock ticking down and reminding them how few ideas can be realised in a lifetime, while others are better suited to exploring one design from as many angles as possible, pushing every aspect to its limits.

“I love Go,” Hecker told me at GDC. “I wanted to make Go, but then I realised I was making a different kind of game. I realised part of the way through that SpyParty is more like Poker.” Embracing what the game is rather than what he originally wanted it to be has been key to the whole process.

If you don't know what SpyParty is, you would be wise to read this early hands-on preview but Pip also summed it up rather splendidly: "[a] reverse Turing test of a game where you have to disappear into a party of AI characters, dodging suspicion as a fellow player armed with a single sniper bullet scans for tells". Two players, then, one trying to carry out espionage missions at a crowded party, while the other tries to identify them by looking for behaviours that mark them as a devious human rather than an AI character.

The Go/Poker analogy isn't perfect but it says a lot about Hecker's approach to design, and why SpyParty has remained interesting to him for so long. And he certainly is interested – at several points during our conversation he sounds more like a fan describing a game that he's discovered and fallen in love with than a person who's spent years working on specific problems and recreating the game, visually and otherwise. 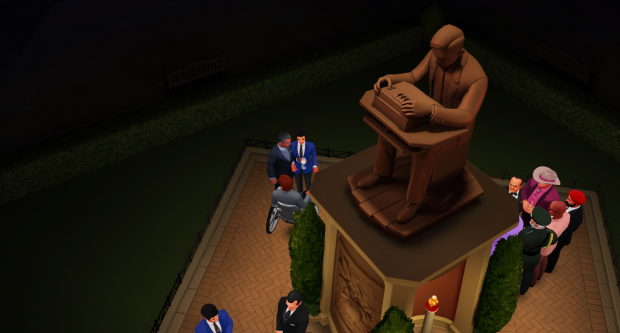 Hecker loves this game, even if it isn't necessarily the game he thought he was making when he began.

“The game that was in mind was Go. It's one of those high-end competitive games, like Chess, and at the other end of the spectrum is something like hold 'em Poker. It's also an amazing competitive game, beautifully designed, but it's all messy and full of probabilities, whereas Go is this crystalline thing. It gives you everything you need to know and then challenges you to win.

“Poker knows you'll lose some hands even if you're the best player at the table. Integrating those win/loss probabilities and the way statistics work is part of the beauty of its design actually.

“When I realised that SpyParty is more like Poker than Go – as much as it's like either of them – I had to come to terms with that because I'd thought I was making a clockwork game, but actually there's a lot of messiness. The bluffing, the tells. Eventually I embraced that Poker terminology.”

When Hecker says 'eventually' here, he's talking about a relatively short-term realisation. In the grand scheme of SpyParty development, the Poker revelation came early. The landscape for indie games has shifted since then and I asked if he had any reservations about the time he has spent working on this one game. The simple answer is a 'no', but there's a more complex answer as well and it's about the danger of precedent.

I mentioned “the Herculean effort” made by the Cuphead team, and how their story of long hours, work-life balance sacrifices and remortgaged homes concerned me as a model for success. It's a story with a happy ending, and I'm glad that's the case, but we tend not to hear quite as much about the tales of indie development with grim endings.

“Some friends and I were talking about similar stories. Making games is scary, full stop. You can be a person who makes a game in three months for iPhone and still goes broke. Especially now. I think all of those articles need a disclaimer because there's a huge difference between anecdote and data.

“Even ignoring return on investment in terms of the financial aspect, if you make a game in a shorter time you're less likely to burn out and hurt yourself. One thing in my advantage is that I'm older – which is both good and bad, because it also means I have a mortgage and a kid (laughs) – but I've been around for a while. I worked on Spore for six years, so I knew where I stood with the sprint or marathon deal, and I know what works for me. For SpyParty it felt like it could keep more than I can give it. 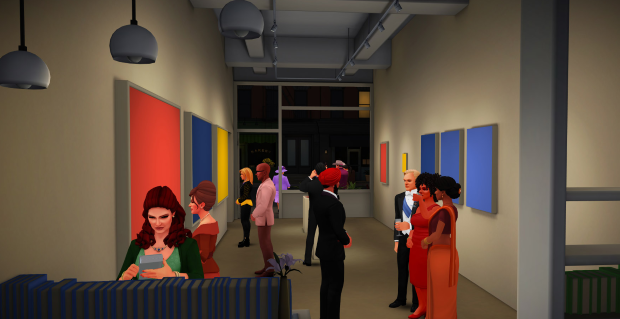 “Trying to do a networked multiplayer indie game with twenty animated characters is insane, but at least my job's different every day! It is scary though. I've basically spent all of my money. I haven't remortgaged my house, but I've spent all of my savings from EA and borrowed some money. I'm optimistic – or at least hopeful – but it's sold 25k copies by itself and hopefully that indicates it'll be a success. If not, I'll be really proud of what I've made. It's a beautiful thing, from a design and an aesthetic perspective.

“It would suck to get a job but I can program a computer. But at the same time, this is a huge piece of me and a huge chunk of my adult life.

“It's so hard to tell people what to do at all. Don't quit your day job until you're sure what you're doing. It's higher risk managing your own personal mental health during these long projects, and managing your finances and making sure you're not endangering yourself in that way.

“And playtest. With Spore I was mostly doing tech rather than design, but we weren't playtesting that game for depth, we were testing it for accessibility. If I was going to make a mistake with SpyParty, I wanted to make the opposite mistake. Worry about the accessibility later once I knew I had the depth.

“With SpyParty, I lucked out. It just became fun one day. I remember exactly when it happened – I had friends over playing at lunch and they had some suggestions; a time limit, some other things. We played again that night at their house and it was fun. They couldn't stop playing.

“If your game doesn't have that 'your friends won't stop playing it' thing, that's a worry. And you know that long before you think about remortgaging your house!” 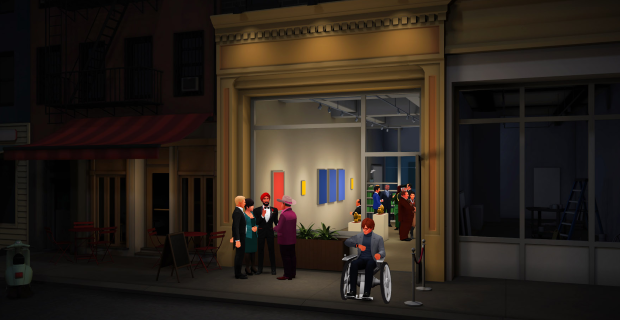 When we first sat down to talk, Hecker was showing me the updated versions of existing maps, explaining the references that had been inserted alongside the new art style. That includes an Alan Turing memorial statue, alluding to the game's conceptual description as a “reverse Turing test”, and new take on London's Sherlock Holmes pub, now renamed for Irene Adler. More important than the new look as a purely aesthetic upgrade, however, is the way it has helped Hecker to tease out the importance of each map as a playable space.

They're small spaces, SpyParty maps, and they all play with the game's rules in a different way. In some games that might mean new hazards were introduced but here, in a game where the key verbs are really observe and perform rather than kill and evade, the maps are all about playing with perspective and visual noise.

The library, riffing on Foucault's Panopticon, places the sniper in the centre of a rotunda, a position which should make it simple to observe all the guests as they go about their business. However, in a way that will bring sympathy from anyone who has ever sat in the cheap seats at certain theatres or football grounds, there are pillars obscuring the view of the room. 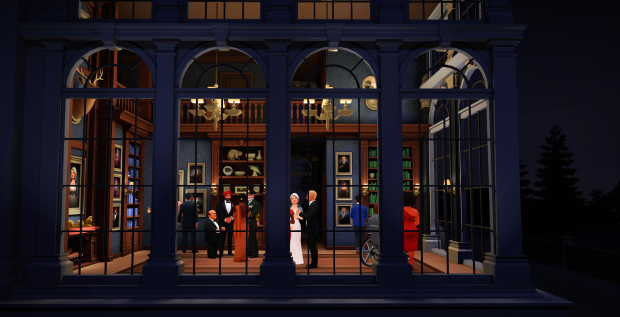 In most SpyParty areas, the sniper is like a camera attached to a rail, panning around a scene like a killer director of photography and trying get a perfect shot. In the Panopticon library the sniper is rooted in place, however, given a commanding position with an elevated viewpoint but no freedom of movement. The most they can do is lean from side to side, trying to peer at hidden activities.

That's true of the new art style as well, intentionally, as becomes clear when Hecker talks me through how the maps have changed over time. Terrace, the Greek island inspired replacement for the Double Modern map, is a perfect example. It's beautiful, with the lights of villas shining in the background, scattered across a hillside. The terrace itself, where the guests are gathered, has multiple levels, though the game doesn't use them.

The exotic location and its opulence act as a distraction. SpyParty has introduced density without sacrificing legibility. You could play the game with coloured blocks to represent the characters, moving through minimalist boxes, but moving away from abstraction and toward a visual style that is so full of character, Hecker has discovered new aspects of the game. When he talks about the trait system, which gives guests' behavioural tells – a lush will take a drink more often, not wanting to have an empty glass – it's hard for me to imagine that working so well if the people weren't identifiable as distinct individuals.

The pink oblong repeatedly taking a yellow square from the gray oblong might provide us with the same data as seeing the oil magnate guzzling flutes of champagne whenever a waiter passes by, but to most players it won't have the same impact. SpyParty is a game about people, which is why it's a game that works better with human diversity in its cast and with open acceptance of its own Poker-y nature.

“A huge part of sticking with a design for this long involves listening to the game. It was originally called Sniper Party and I made it at a jam using Sims assets, where the theme was “do things that other people aren't doing”. My feeling was there aren't enough people games. We're doing better now, but there are still more orc and space marine games.

“Sniper Party was based on an existing idea and I was telling Will [Wright] about that idea one time and he said it'd never work. That it'd be immediately obvious which character was the human player.

“So I made a box, with windows on two sides, and with Sims characters walking around who would occasionally pair up and talk. And I had control of one of them and I recorded some footage of that and showed it to people and it was impossible for them to figure out which one was me. So I knew it was going to work, the fundamental idea of the reverse Turing test.

“From then on, I had to listen to the game rather than have a set idea of what it might become. The fundamental idea worked, the rest was in an area that's not very widely explored, so I let the game lead me in certain directions. That doesn't mean you don't need a strong internal compass, but that's what it is – a compass rather than a roadmap.”

SpyParty arrives on Steam this week, on Thursday the 12th.