Star Wars Battlefront 2’s campaign is a gorgeous shooting gallery that takes you to amazing planets, both old and new. But is it any more than that? These are my thoughts on the single player part of the game, and I’ll be following up with a review of the multiplayer after the game properly comes out this Friday.

I’ll start with the story, which has an enticing setup that doesn’t lead anywhere interesting. For most of the campaign, you play as Iden Versio, the leader of elite Imperial special forces unit ‘Inferno Squad’. Once I got past the dodgy band name, I was initially intrigued by Iden and her role in the Empire.

In the first mission, Iden executes a ship full of rebels before launching herself out of an airlock for a mid-space extraction. It’s one of many high-octane moments that could have come straight out of a modern Star Wars movie, but what really got my attention was the way she immediately complimented the pilot that came to her rescue. It’s enjoyably odd seeing servants of the Empire being nice to each other, and was even disarming enough to make me empathise with them when the Death Star got destroyed shortly after. 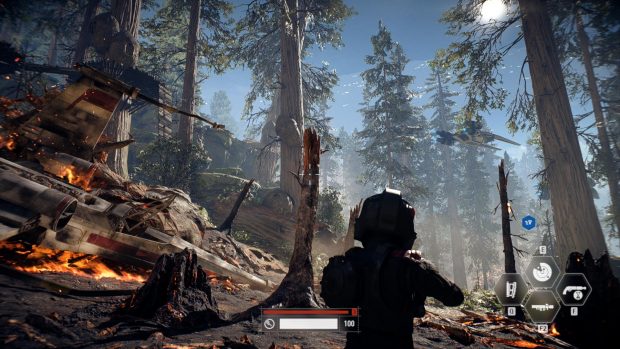 At that point, I thought I was going to get a new, nuanced perspective on the Empire that made it out to be something other than comic-book evil. Admittedly, it’s an oppressive organisation headed by a vampirish figure who’s fond of shooting lightning out of his hands while cackling hysterically. He’s quickly taken out of the picture, however, which opens the door to all kinds of possibilities.

What if there was a force (sorry) within the Empire pushing for reform? What if Battlefront 2 was about trying to circumvent the last orders of a deceased maniacal dictator, and turn the Empire into the peacekeeping, law enforcing body that it purports to be? That’s a story I’d have liked to have been told, rather than being lectured about the importance of hope in the face of blatantly evil acts done in the name of ‘order’.

Thing is, there’s nothing wrong with a bit of actual order! In a section where you wander around Maz’s castle - as first seen in The Force Awakens - you can overhear various shady characters trying to threaten and extort each other. There’s absolutely a case to be made that imposing the rule of law on the galaxy would make it a better place, and so it’s a shame that Battlefront 2 never explores it. An early mission in which you actually help some citizens might have justified Iden’s loyalty to the Empire, given the ideals she expresses from the outset. 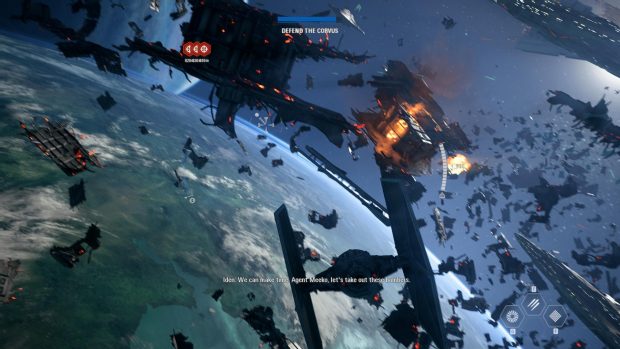 She’s enough of a badass that I couldn’t help but like her, even if she is a bit bland and not as smart as the game makes her out to be. There are multiple moments where Iden comes up with a Clever Plan. “I’ve got an idea”, she’ll announce, as her squadmates wait to see what ingenious scheme she’s concocted this time. Her idea is, invariably, to blow something up.

Fortunately, blowing things up is what both Iden and Battlefront 2 does best. There’s a simple joy to watching Star Destroyers light up like fireworks, AT-ATs stagger to the ground and X-wings explode. The whole game is gorgeous, and lets you soak in familiar locations like Endor and Jakku in a way that matches and even surpasses the grandeur of their Hollywood counterparts. Pleasingly, the tour doesn’t only stop at old locations - there are several new, properly alien looking planets to shoot your way through too.

You’ll see some of those planets from the perspectives of familiar heroes, with one-off missions that let you take control of Luke, Leia and others. I’ve got mixed feelings about their inclusion. On the one hand, mowing down stormtroopers with a lightsaber and overpowered force moves provides a nice counterpoint to the duck and cover shooting that Iden gets up to. On the other, they result in a disjointed narrative that stalls any character development Iden had left in her, and makes the plot feel closer to a montage of spectacular, unrelated battles than a coherent story. 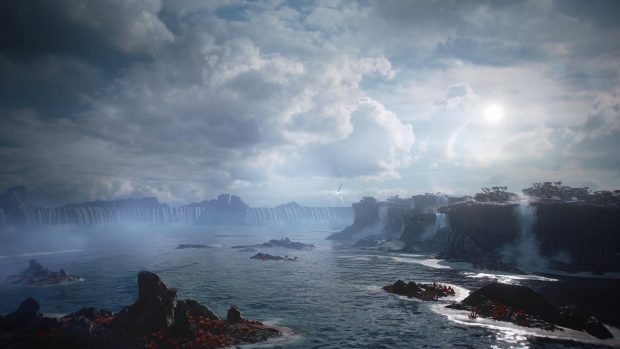 It may be visually varied, but that diversity doesn’t extend to the gunplay itself. Over the five or six hours of the campaign, you’ll fight the same enemy types again and again, which are distinguished from each other only by the way some of them have bigger guns. There are officers which you’re encouraged to take out before their subordinates, but it doesn't make that much of a difference. The weapons do feel like they have heft behind them, which is a massive improvement from the first game, though it doesn’t really come close to providing the same satisfaction as popping heads in Destiny.

I do like the active reload system, where re-tapping the reload button at the right moment will let you go straight back to firing. There’s a special gold sweet spot that lets you fire for a brief period without having to worry about overheating - deciding whether to risk attempting to hit that narrow window is an interesting mid-combat decision. 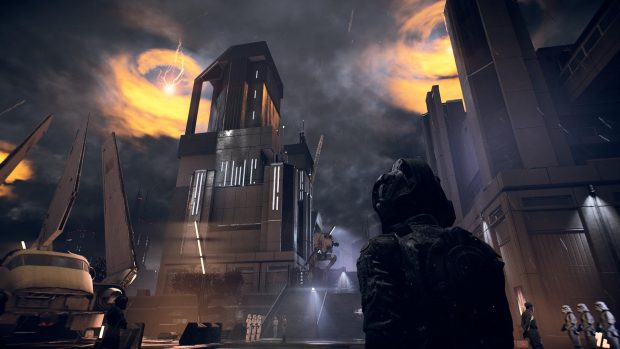 There are a dozen or so different guns available from the start, but none of them can feel that distinctive when every enemy goes down in one headshot. It’s a bit different in the multiplayer, where your opponents are naturally more deadly and you have their abilities to contend with, but in the single player I rarely felt the need to swap my loadout around. Dabbling with the different guns is like trying a mildly interesting new flavour of ice cream. The A280 is to the TL-50 as toffee is to fudge. One exception to that is when I tried equipping a sniper rifle, and combined it with an ability that let me temporarily equip a shotgun to compensate for my lack of short-range damage.

You can equip 3 of those abilities in your loadout. They either provide a passive effect like shortening your health regen delay, or give you a tool like a thermal detonator or an energy shield. Frustratingly, at the start of each level it swaps in a new loadout without asking. You can change back, but it’s an unnecessary intrusion that made me resent having to faff around replacing my abilities and gun choice. I get that the game wants me to try out new toys, but having them forcibly placed into my hand when I’ve just settled on a build doesn’t make me want to do that. 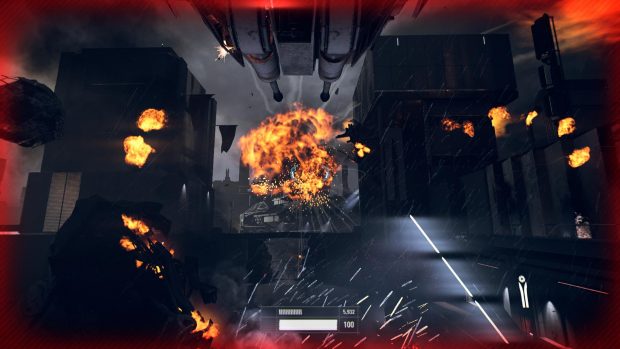 At times, Battlefront 2 skirts the fringes of a stealth game, providing a few opportunities to sneak up on enemies and silently whack them into oblivion with a baton. I felt like I was doing that more for the sake of it than because it’s an effective approach: I’d inevitably be spotted after one or two takedowns, and then find myself in a more vulnerable position than if I’d just taken them out with a quick headshot from a distance. Simply allowing me to mark enemies with anything other than one ability on a cooldown would have helped, though it still takes so much time and effort to go in for a melee kill that I doubt I’d have behaved all that differently.

Melee kills do recharge the ability of your droid, which can electrocute a group of enemies whenever its zap-o-meter fills, but you can also fill that bar up by simply going for headshots. And again, enemies go down so quickly on the standard difficulty that I seldom had any need for it. It’s another waste of potential, both mechanically and from a character perspective. Iden just calls it ‘Droid’, and its defining personality trait is floating at an alien who gets annoyed at it. It’s nothing like the robo-relationships that R2 and BB-8 bring to the table. 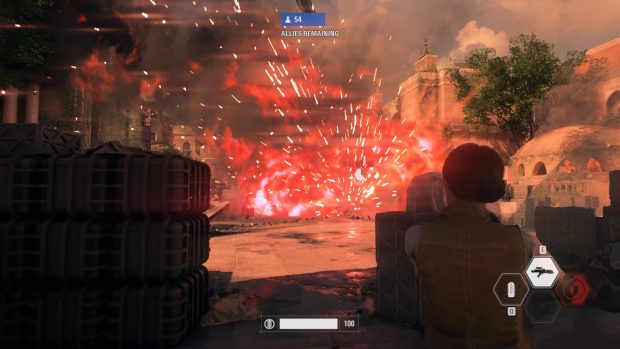 There are spaceship missions too, which feature some of the game’s biggest spectacles but also the dullest combat. I quickly grew tired with fighting wave after wave of bombers and fighter craft, and bringing down the bigger objectives is even worse. There’s not really much skill involved in the dog fighting, and the only times I died were when I crashed into a capital ship by impatiently trying to minimise the number of strafing runs it takes to bring them down.

In one particularly annoying space section (that came straight off the back of another one) I got held up for a while by an errant objective marker. Back on land, another bug disabled the ‘combat roll’ button, which I sorely missed for the entire game. 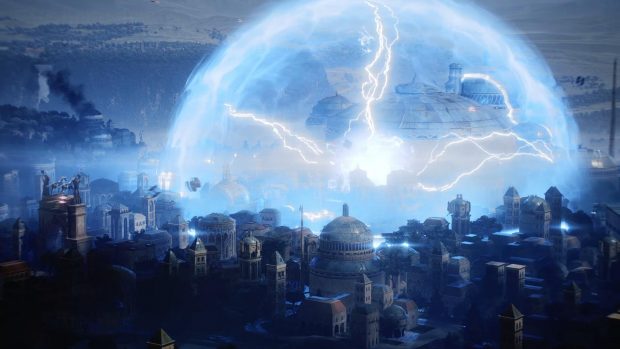 I’ve brought up a lot of negatives here, but before I wrap this review up I should emphasise that Battlefront 2 absolutely succeeds at immersing you inside the Star Wars universe. It accomplishes that through breathtaking reconstructions of planets from films both old and new, with set-pieces that hit every AT-AT toppling note that Star Wars battles should do. There are also screen-wipe transitions aplenty, and I couldn’t stop grinning during an early mission that has you shooting control panels that slam down doors to cover your escape.

If you’re after an authentic feeling, visually stunning romp through your favourite distant galaxy, then that’s one front on which the game doesn’t disappoint.

Star Wars Battlefront 2 is out 16th or 17 November, depending on your timezone. It runs on Windows and costs £55 via Origin. Our multiplayer review will follow soon.