The Ninth Sister is one of the key antagonists in Star Wars Jedi: Fallen Order, and after an unfortunate encounter in the first mission, we all know that we're going to have to come up against her later on in the campaign. This boss fight is trickier than any you'll have come across so far, and requires careful footwork and a good understanding of this powerful foe. Our Star Wars Jedi: Fallen Order Ninth Sister boss fight guide will walk you through cutting down this beast of an Inquisitor even on the highest difficulties. 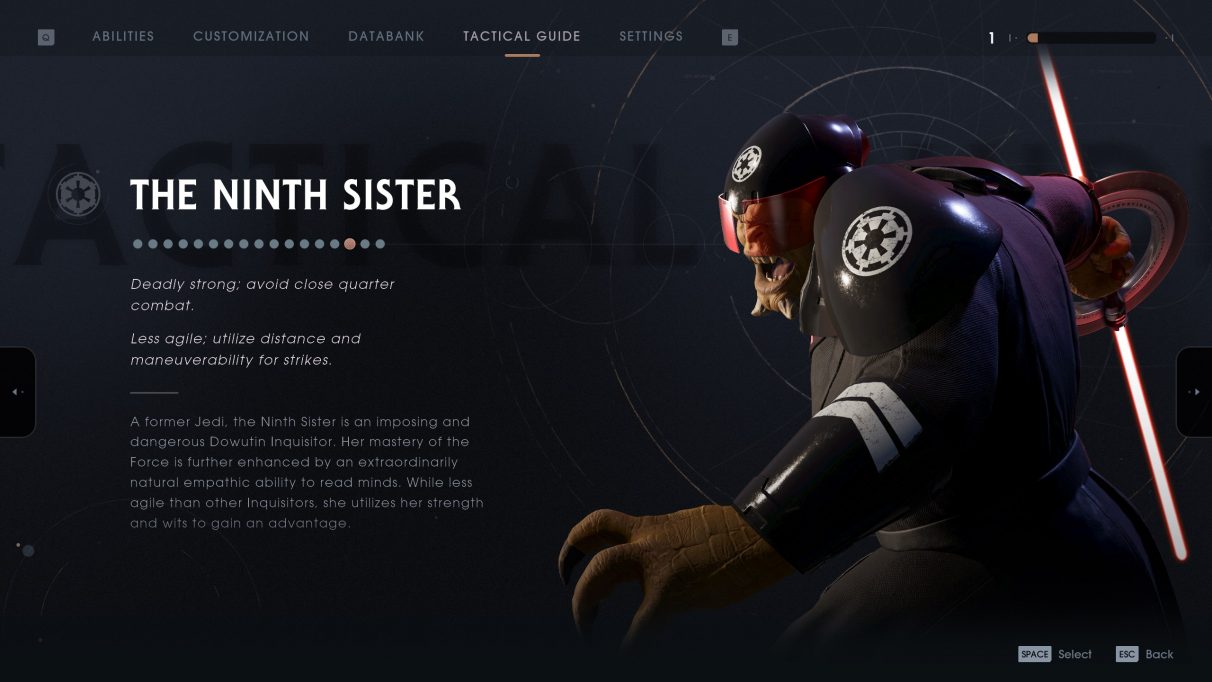 Where to find The Ninth Sister

The Ninth Sister is to be found on Kashyyyk, the second time you return there as part of Cal's story. While on your trek to the very top of the Origin Tree, you'll be set upon by the Ninth Sister in her ship, and saved just in the nick of time by the arrival of a gigantic Shyyyo Bird, which wastes no time in manhandling the Ninth Sister's ship.

If you've reached this point, you're getting fairly close to the Ninth Sister boss fight. Once you reach a Save Point near the very top of the Origin Tree, all you need to do is head down the path and jump down into the suspiciously boss-fight-looking clearing up ahead.

How to beat The Ninth Sister boss fight

A word of warning on the Ninth Sister boss fight before we begin. If you've already died to her at least once, then when you face her again, you'll need to be very careful. The yellowish tint that signals an enemy that killed you last will unfortunately hide the red tint that signals an unblockable attack. This is a warning for all boss fights, but particularly the Ninth Sister, who likes to use a wide variety of unblockable attacks. So until you hit her once to regain your lost XP, you should play it very safe. 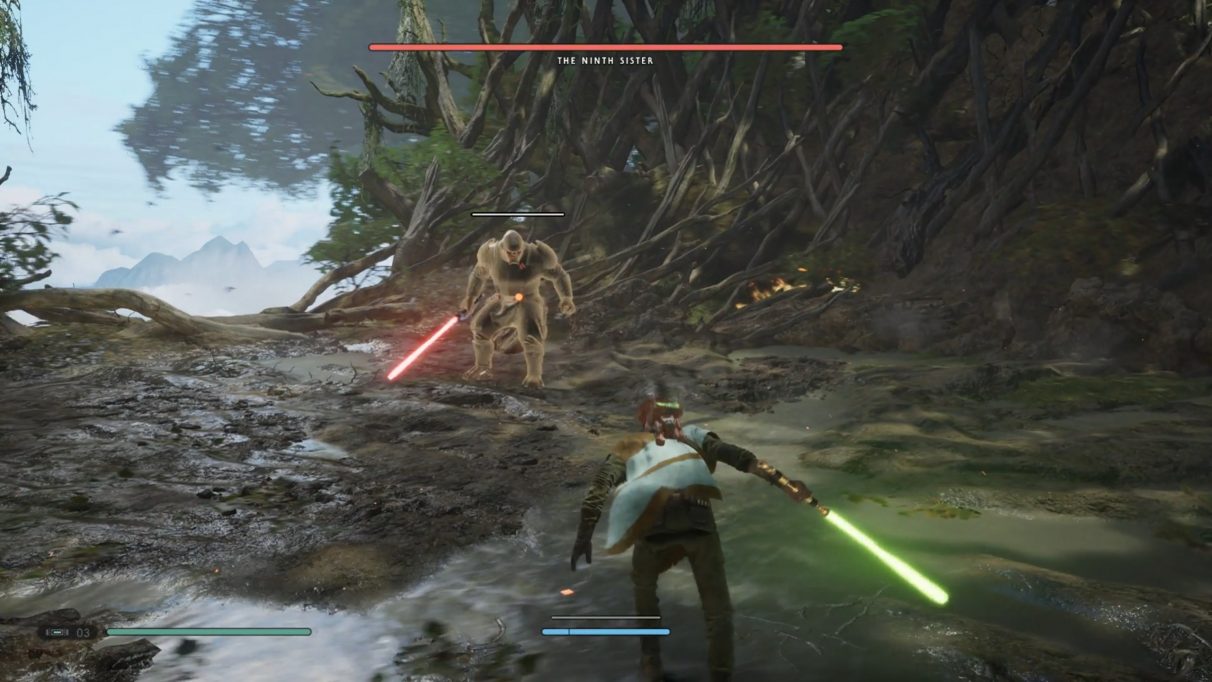 Now: how do you go about besting this powerful Dark-Sider? If you haven't yet gotten the hang of deflecting attacks, then this boss will force you to learn. The Ninth Sister has one ordinary combo of three blockable attacks which she likes to use quite a lot, and deflecting all three of them will absolutely demolish her stamina meter, allowing you to get several good hits in.

But hit her too much in this moments, and she'll deflect you - which is fine on its own, but she'll almost always follow up her deflect with attacks of her own, so be prepared to quickly switch from an offensive to a defensive mindset during this fight.

The difficulty comes with her diverse sets of moves and attacks. She has two unblockable attacks to begin with: the first is a close-range attack which she thankfully telegraphs by spinning around 360 degrees first; and the second is a huge leap into the air and Excalibur-ing of her lightsaber into the ground when she lands. The first should be avoided with a roll backwards, and the second with a roll or sidestep to her side. Both these unblockable attacks leave her open to another couple of hits, and these are also excellent moments to use your Leaping Slash skill if you have it, to deliver two powerful blows in quick succession (for more info on all the skills Cal can gain, check out our Star Wars Jedi: Fallen Order skill tree guide!).

The other things to worry about are her using the Force to make or close distance between you. If you're too aggressive and in her face, she'll use Force Push against you, which is fine because it deals no damage. But if you're too evasive and defensive, she'll instead use Force Pull to bring you right up to face her. Again, this deals no damage on its own, but she'll always follow it up with either the trio of blockable attacks or one of her unblockables - so keep a level head in these moments, and adopt the correct response for whichever attack arrives. 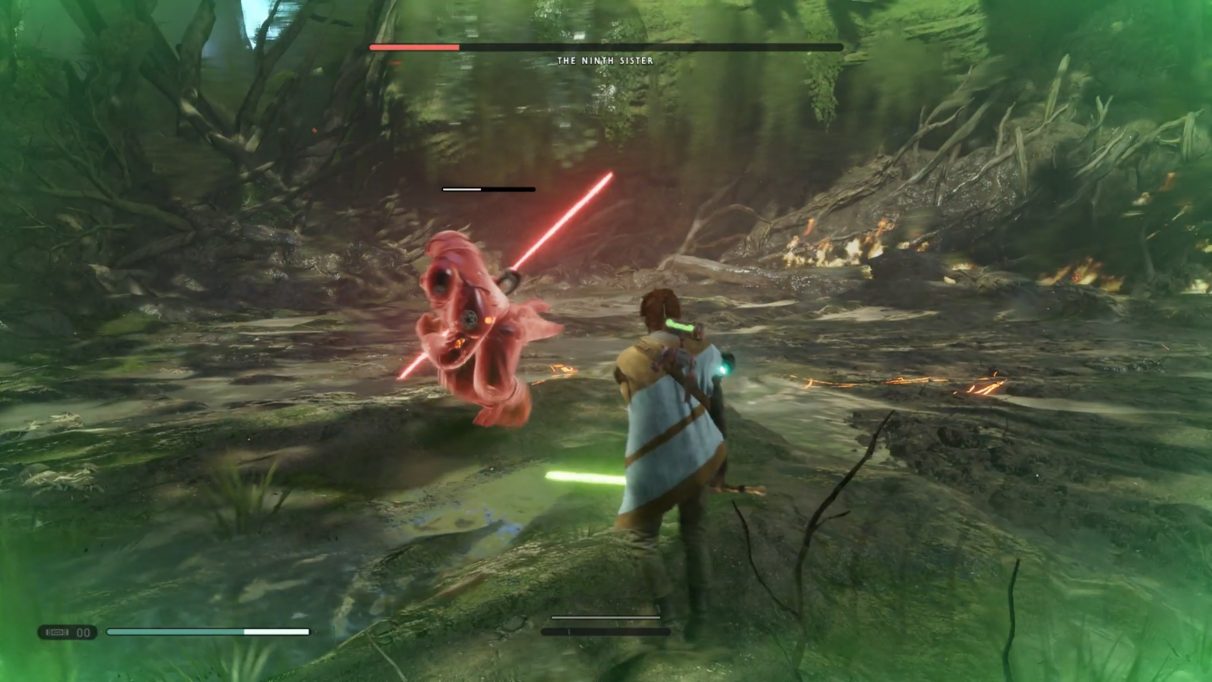 Once you knock her down to about two-thirds health, she'll switch to her double-bladed lightsaber style, which is a lot flashier and gives her access to quite a few more attacks. Whereas before the emphasis was very much on deflecting, from now until the end of the fight the focus is far more on rolling to avoid her new unblockables. There are in total four new unblockables to watch out for:

This is in addition to her previous two unblockables (the leap and the 360), so there's an awful lot to watch out for now, but aside from the ground slam (which you deal with by jumping), each of these attacks can be nullified simply by rolling far away from her blade when you see the move being telegraphed.

Her series of ordinary attacks now has four moves, rather than just three; and she will also throw her lightsaber at you in moments where there is some distance between you - but all this can be blocked or deflected with ease, so it's not much of a problem at all. The real issues are her six unblockable attacks, which she likes to chain together at times in rather unpredictable ways.

The upside is that these unblockables leave her very open to attacks if they miss, and her stamina bar is easier to deplete than you might think, particularly if you make good use of the aforementioned Leaping Slash skill. Keep whittling away at her health, and don't get greedy because she will ruin your day with unblockables. Commit those unblockables to memory, and you'll walk away from this battle as even more of a Jedi than you were before.

And with that, you now know everything you need to fight and defeat the powerful adversary known as The Ninth Sister! But that's not all we have on Jedi: Fallen Order, not by a long shot. Whether you're after tips on another boss, or you're looking to understand another aspect of this extensive game, be sure to check out our guide series below.