Trilla Suduri is, for all intents and purposes, the "big bad" boss of Star Wars Jedi: Fallen Order. Smart, agile, and more powerful every time you face her, you'll need to maximise your chances of success if you want to best her and complete Cal's story. And what better place to start than our Star Wars Jedi: Fallen Order Trilla boss fight guide, which will walk you through both our first and our far more difficult second encounter with this dangerous foe towards the very end of the campaign.

Note: this guide is for the two fights you have with Trilla under the name "Trilla Suduri". For tips on your earlier encounter with her as "The Second Sister", be sure to check out our Star Wars Jedi: Fallen Order Second Sister guide. 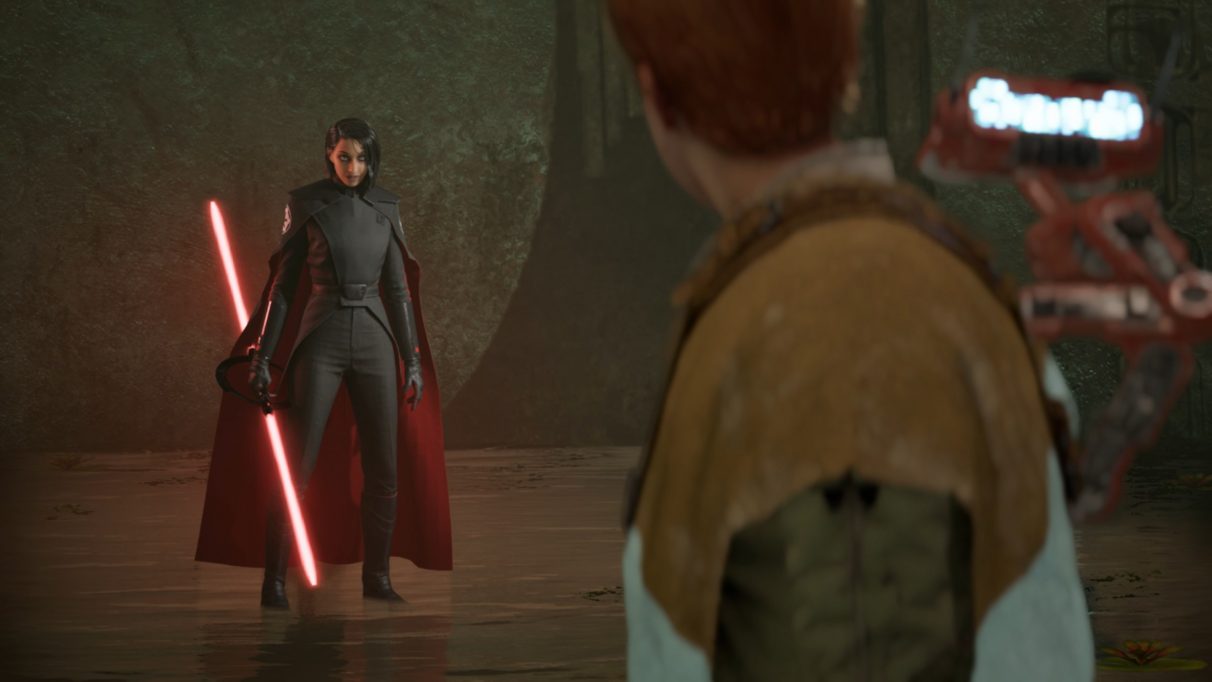 Where to find Trilla Suduri

After your previous encounter with The Second Sister back on Zeffo, you'll know that she is in fact Trilla Suduri - former padawan of Cere Junda, and the reason Cere shut herself off from the Force. Trilla is after the Jedi Holocron, just like you, so it stands to reason that she's there waiting for you the moment you finally manage to lay your hands on the Holocron on Bogana.

As such, it's very straightforward to find Trilla - simply follow the main objectives until they take you back to the temple on Bogana. Once inside, you'll have a rather disturbing vision involving the hunting down and murdering of lots of younglings (fun times) - and immediately after this vision ends, you'll be set upon by Trilla.

This particular Jedi: Fallen Order boss fight is actually very short-lived, and merely offers us a taste of what to expect when we meet Trilla again, not long from now. All you need to do is get Trilla down to around three-quarters her current health in order to prompt a cutscene signalling the end of the fight - for the time being.

If you're struggling to get through this first taster fight, here are the main things to bear in mind. First, just like your last fight with her as The Second Sister, Trilla just loves to chain together her attack combos in unpredictable ways, which means you'll be punished for being overly aggressive. Make sure she's well and truly finished with her current combo before pushing in with strikes of your own.

From what little I played of this fight, Trilla has four main attacks to watch out for. The first is a long four-step flurry of strikes, all of which are blockable and deflectable - but she'll often follow this up quickly with one of her other attacks, so be careful. She has a habit of throwing her lightsaber at you at times, which is again easily blockable as long as you see it coming (she telegraphs it by spinning the lightsaber over her head first). 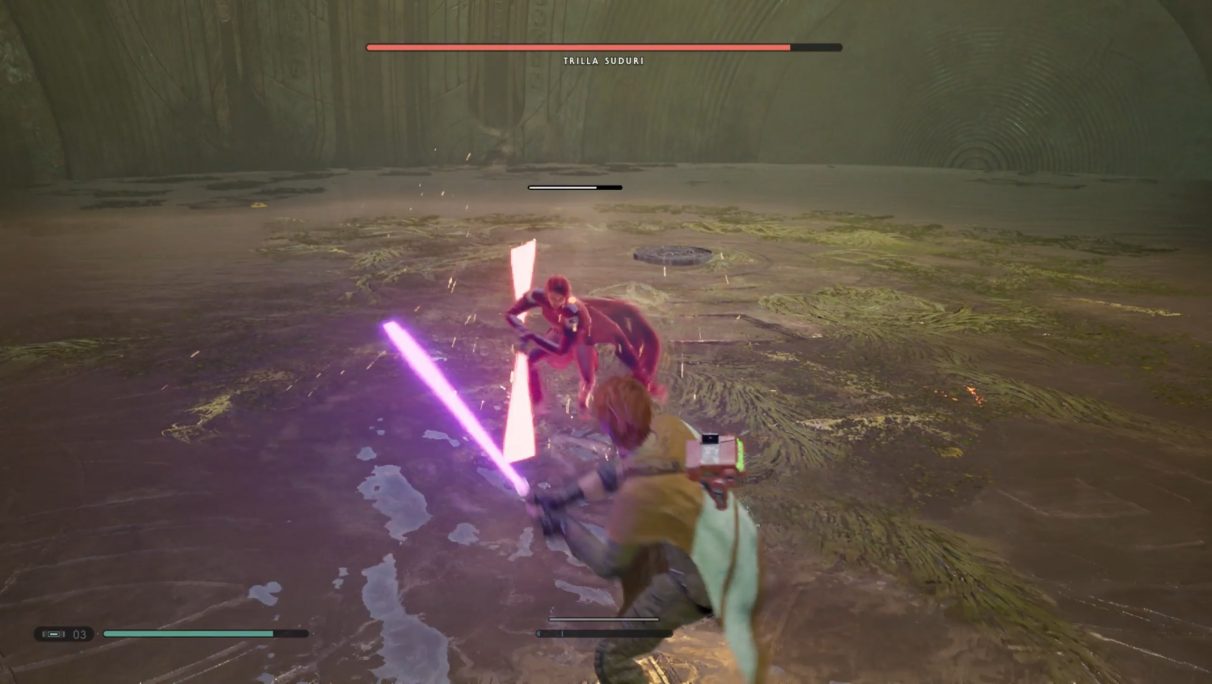 The other two are the unblockable attacks: a grab, which she attempts if you get too close (and she'll sometimes plant this move straight after or before a series of normal attacks so be on your guard for this); and her old familiar lunge-and-stab, which shouldn't give you too much trouble because it's so clearly telegraphed ahead of time.

Once you complete this fight, you'll need to head to the planet Nur, for the final campaign mission inside the Fortress Inquisitorius. Fight and swim your way through numerous Stormtroopers of all shapes and sizes, and you'll finally come across the Interrogation Chamber where Trilla is once again lying in wait for you.

This is where things get real. The final boss fight of Star Wars Jedi: Fallen Order is by far the most challenging, as Trilla utilises a number of very annoying and hard-to-spot moves against you. Let's break down this fight bit by bit.

Her usual flurry of four blockable attacks is here, and by now you've had an entire campaign with which to hone your deflecting skills, so these are your main chances to inflict some big stamina damage on her. Just watch out, because as we all know by now, Trilla loves to transition fluidly from blockable to unblockable attacks. Train yourself to hesitate just a tiny moment after each of her combos before attacking, to see if she is actually in recovery or if she's gearing towards another attack already.

Your Leaping Slash, as with all boss fights, is a fantastic move for dealing significant damage either to health or to stamina depending on when you do it; but you may also want to conserve some Force for the occasional Pull or Slow, which will serve to cancel some of her deadlier attacks and give yourself time to heal when needed. 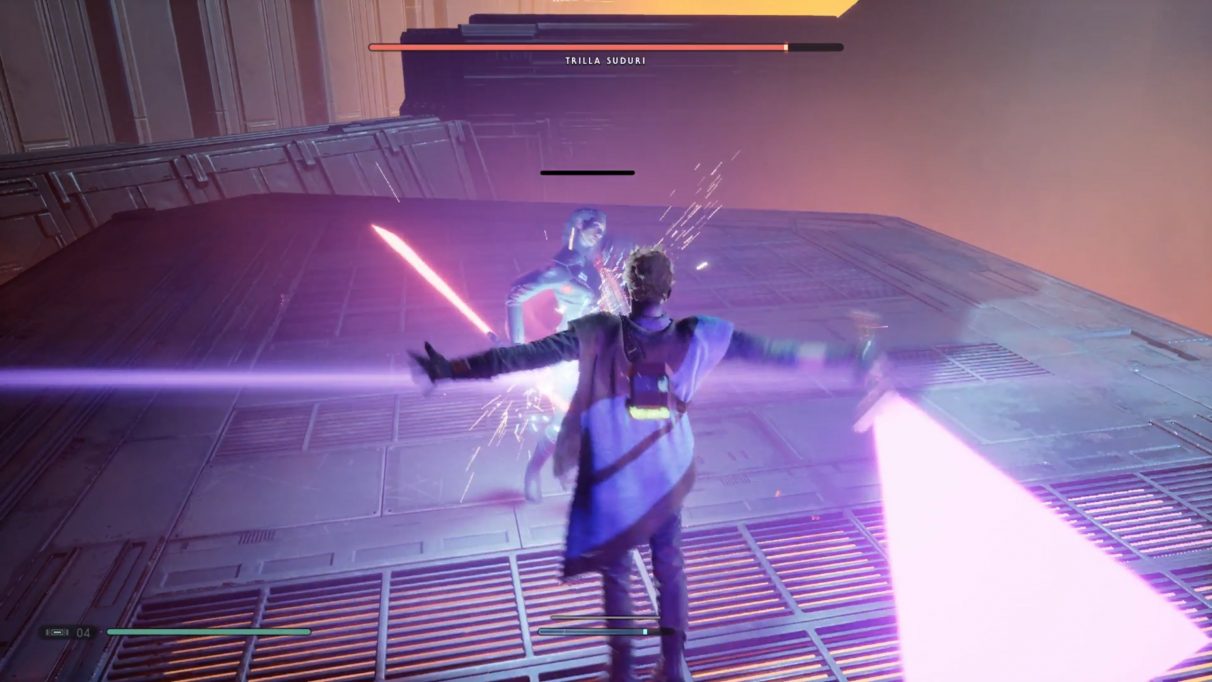 Big tip coming up: distance is an illusion in this fight. Trilla has some tremendous range on her attacks, and she can zip to you at a moment's notice from across the arena. So never ever lower your guard. Seriously, don't do it. Not even for a second.

For the first third of the fight all you really need to worry about is deflecting her blockables and sidestepping her two unblockables (the lunge-and-stab, and the leap-and-slam, both of which you've encountered in your previous fights with her). Around the two-thirds health mark, she'll zip away and start to taunt you. If you can get to her quickly enough in this moment, you can get some really nice attacks in while her defences are lowered. But be careful, because this taunting process will abruptly end with an unblockable lunge.

Nearing the halfway mark, and this absolute bastard of a Probe Droid will appear out of nowhere and start to fire at you while you're trying to have an honest one-on-one fight. Fortunately, you can easily dispatch this foe either by using Force Pull and ripping it to shreds or, if you have more time, deflecting its bullets back at it until it starts to self-destruct, and then maneuvering it so that the explosion hits Trilla and not you. This can be rather difficult to do while Trilla is fighting you, but if it works out, that's the best possible outcome. 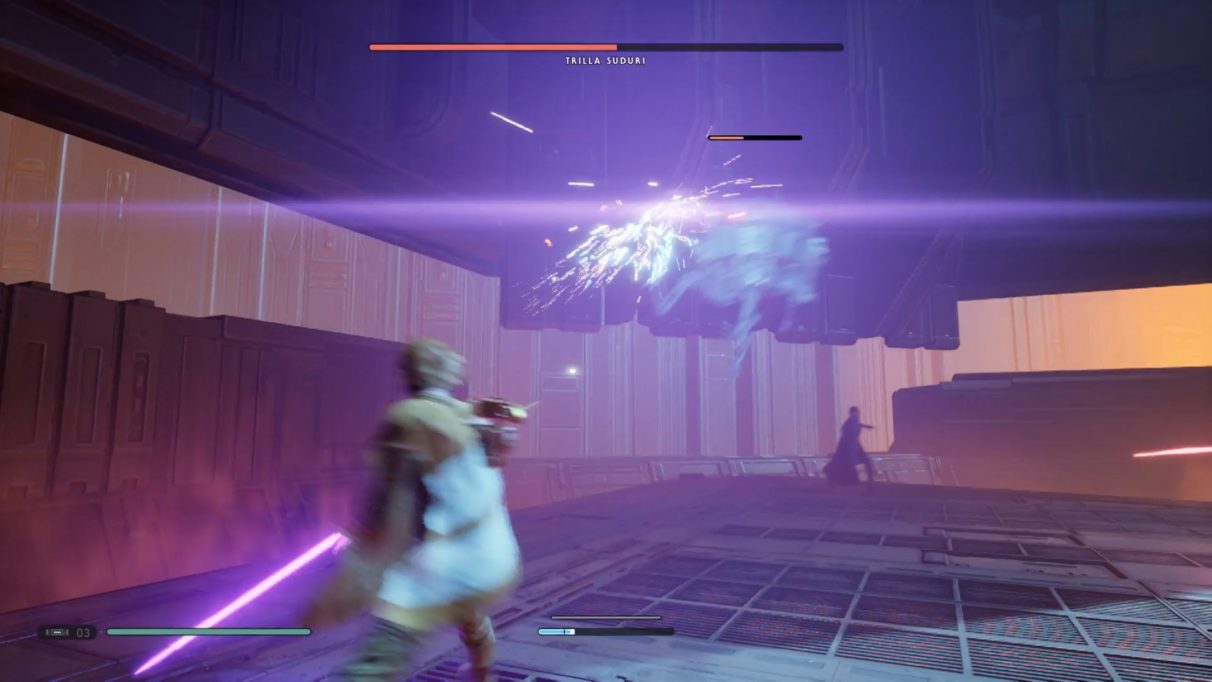 At this point, you'll enter the second phase of the fight, and this is where she unveils three of the very worst, most diabolical moves in the game. The first is an evolution of her old unblockable grab attack. This is now one of her zippy attacks where distance doesn't matter, and if you don't roll out of the way quickly enough, she'll do some weird Dark Side bullshit and suck your brain out or something. I don't know, just don't get hit by it, mmkay?

The second super-annoying move she does is her lightsaber throw combo. This is a blockable attack, but she has a habit of chaining together multiple throws extremely quickly - as in, every time it returns to her, she immediately throws it again. Sometimes this happens just once, sometimes it happens three or even four times in a row before she desists. The good news is that they're all deflectable, and can deal a fair amount of damage to her if you deflect all of them.

The third super-annoying move is her ground slam, which is a carbon copy of what the Ninth Sister does in your fight against her earlier in the campaign. It's easy to jump over the shockwave when you see it coming, but she loves to abruptly transition to this move during her close-range blockable attacks - and what's more, she often likes to use it multiple times in a row, which can be infuriating. Your best bet is just to gain as much distance from her as possible if you see her do the telltale horizontal spin through the air. 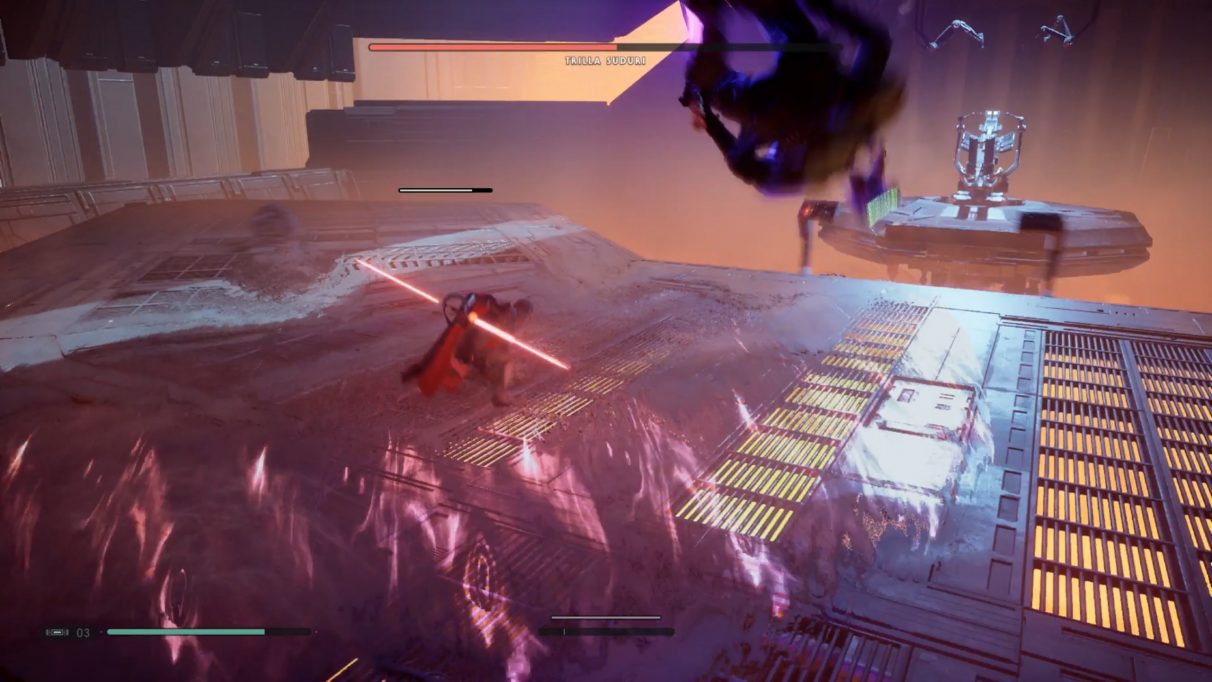 Two more interesting things she does in this second phase (yeah, she has a lot of moves): first, she'll occasionally drop flash bombs which will momentarily blind you. They're not that big a deal, try not to get distracted by them. The blinding only lasts a moment, and you can still fight while blinded. If you're worried there's an attack coming that you can't see, your best bet is just to roll to the side.

And the other move to watch out for is when she throws her lightsaber and it starts to orbit around her. This is actually one of her weakest moves, because as long as you're quick enough to close the distance and get inside the orbit of the lightsaber, she's completely defenceless and you're able to get a couple of strikes in for free. 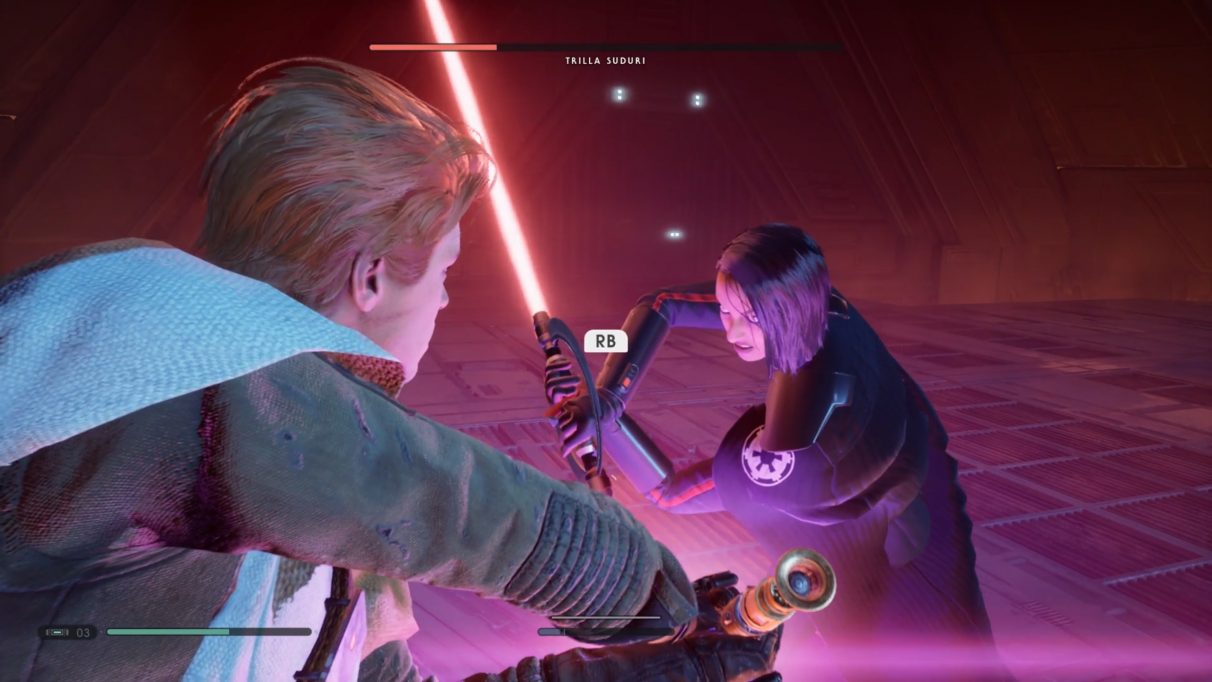 Okay, that's just about every trick she has hidden up her Sith sleeves. It's a tough and drawn-out fight, this one - but deflecting her blockable attacks (including her lightsaber throws) will help you out enormously here, as will a constant vigilance. Remind yourself that the moments you think you're safe for a moment are usually the moments that will really mess you up as she prepares one of her cheaty unblockable zip-across-the-map-and-suck-your-brains-out moves.

Bear all this in mind, and you'll come off the victor. As for what happens after that... Well, I'll leave you to discover that for yourself. 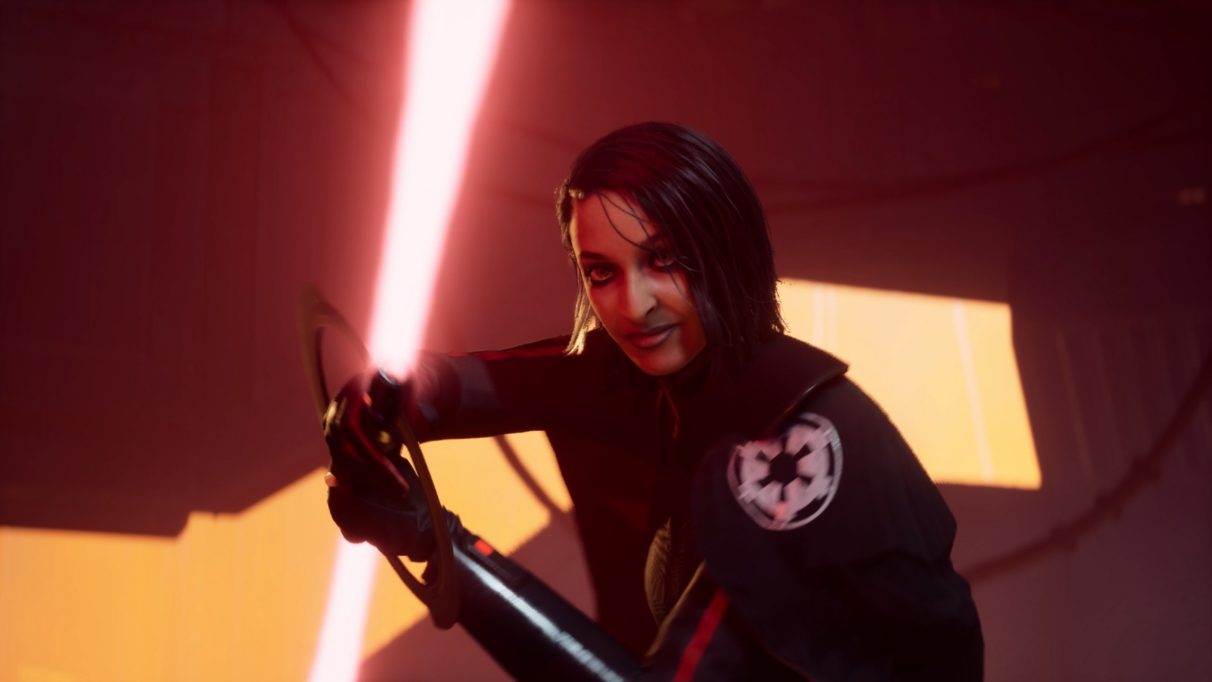 And with that, we'll conclude our walkthrough on how to at long last beat Trilla Suduri, the Second Sister. But that's not all we have on Jedi: Fallen Order, not by a long shot. Whether you're after tips on another boss, or you're looking to understand another aspect of this extensive game, be sure to check out our guide series below.