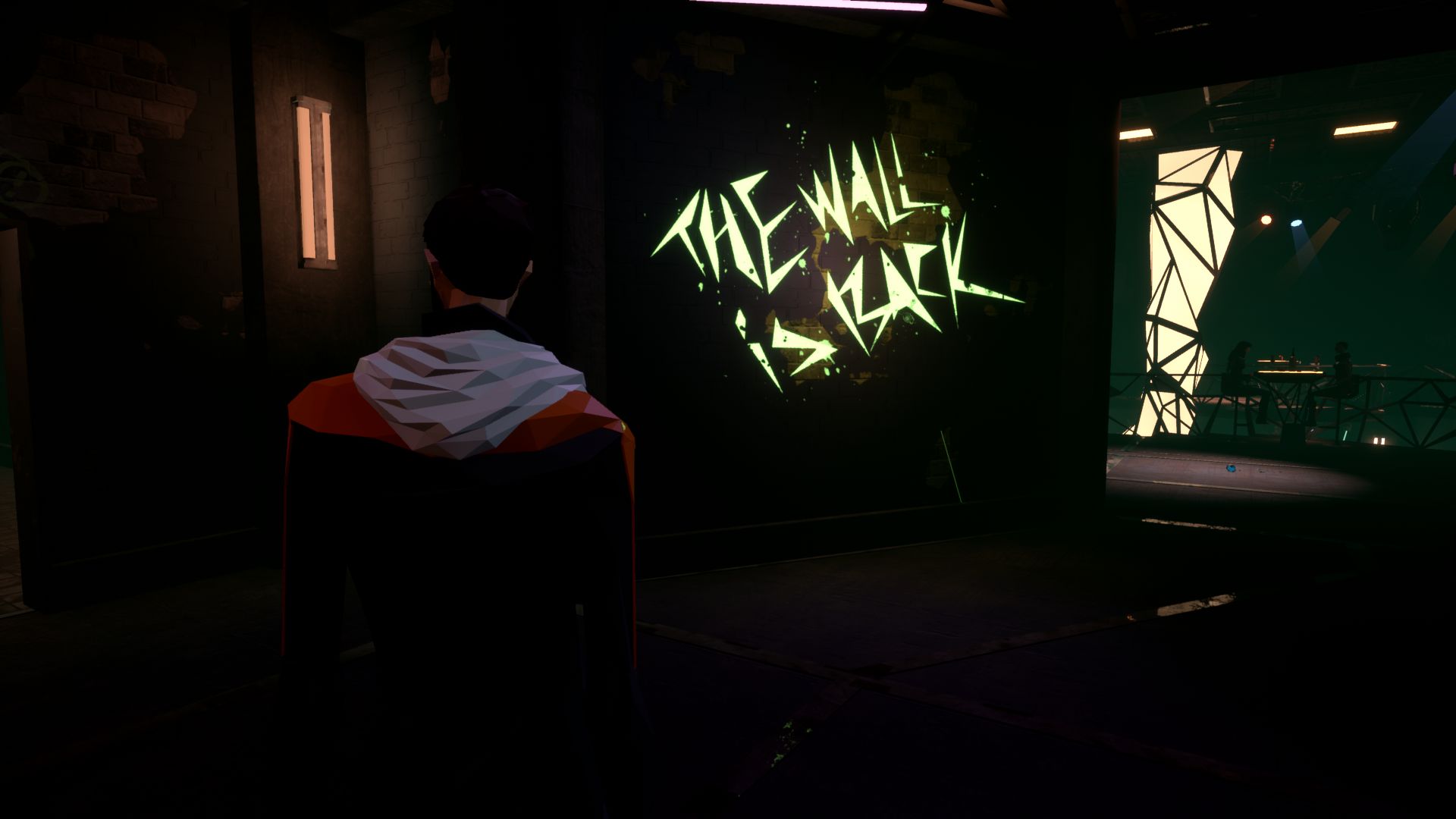 For me, cyberpunk fiction has two tropes which shape pretty much everything about its stories. Firstly, the protagonist is always on some kind of fake quest, trying to discover something about their world; they then instead end up discovering their own values, history, past; their very self. Secondly, robots, AIs, cybernetic hybrids etc are almost always revealed to have some fundamental humanity that none of us can reasonably deny. Think Deckard and, latterly, Ryan Gosling’s K in the Blade Runner films. They set out to investigate androids and their dreams, and discover instead the reality of themselves. Deckard might be an android. It’s ambiguous, but that ambiguity doesn't matter because no one who sees the films could deny his intrinsic humanity. Identity and emergent humanity loop into one another and you end up with a great story.

Doing these tropes justice is what makes great cyberpunk. It’s what connects 2001: a Space Odyssey with games like Deus Ex, and makes for a meaningful commentary on issues like posthumanism. State of Mind is a beautifully crafted cyberpunk game, with an immersive and interesting world that’s second to none, but it ultimately fails at doing cyberpunk fiction well. 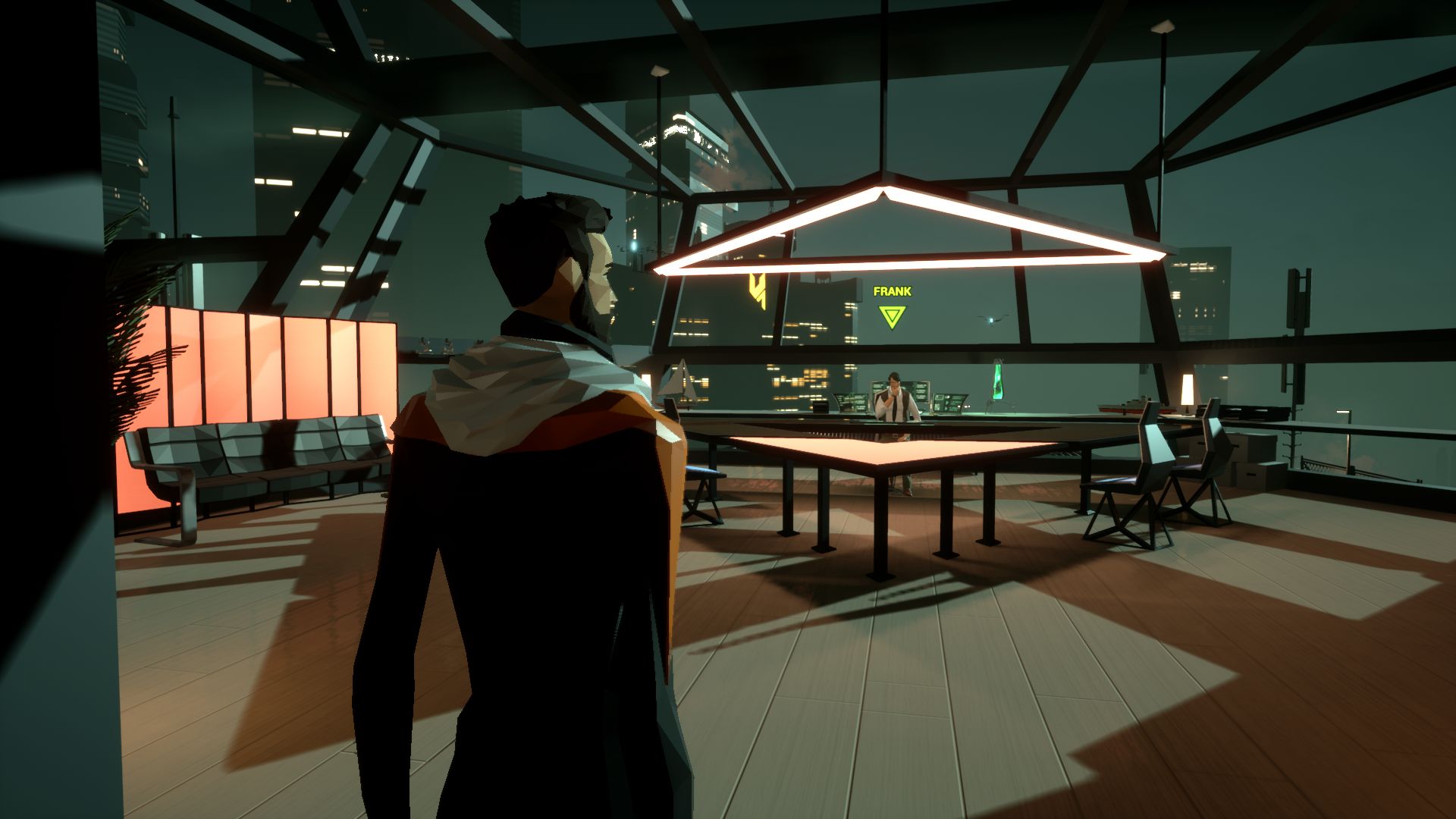 It fails at this by convoluting and contorting these two tropes to the point of making them glib and meaningless. The following is an abbreviated list of the events that are happening at the start of the game: the emergence of a Skynet-esque AI; the colonisation of Mars; robots coming to consciousness; a robot uprising; a luddite humanist revolution against tech; an evil tech firm trying to copy and paste consciousness; some kind of Matrix thingy; a plot about memory fragments that is inexplicable; and, you know, another Skynet AI coming to consciousness in China.

Coming at the core tropes of cyberpunk from so many perspectives and angles, and all at once, lessens the impact of any one narrative. And that’s really frustrating, because if you ignore State of Mind’s clusterfuck plot, it succeeds on almost every count.

You first play as Richard Nolan, one of multiple player characters. He’s an amnesiac recovering from a car crash in dystopian Berlin, 2048 (Orwell wrote 1984 in 1948, so the date entendre here is no doubt intentional). Richard’s family is missing and he’s trying to find out what’s happened to them. He works day to day as a journalist writing about technology and its vice like grip on people's lives. Richard is a unique character because he’s angsty, flawed and not a nice or good guy. He scowls at robots and drinks whiskey as he writes. He’s also voiced by Doug Cockle, who voices Geralt in The Witcher series. So of course he’s a likeable bastard. 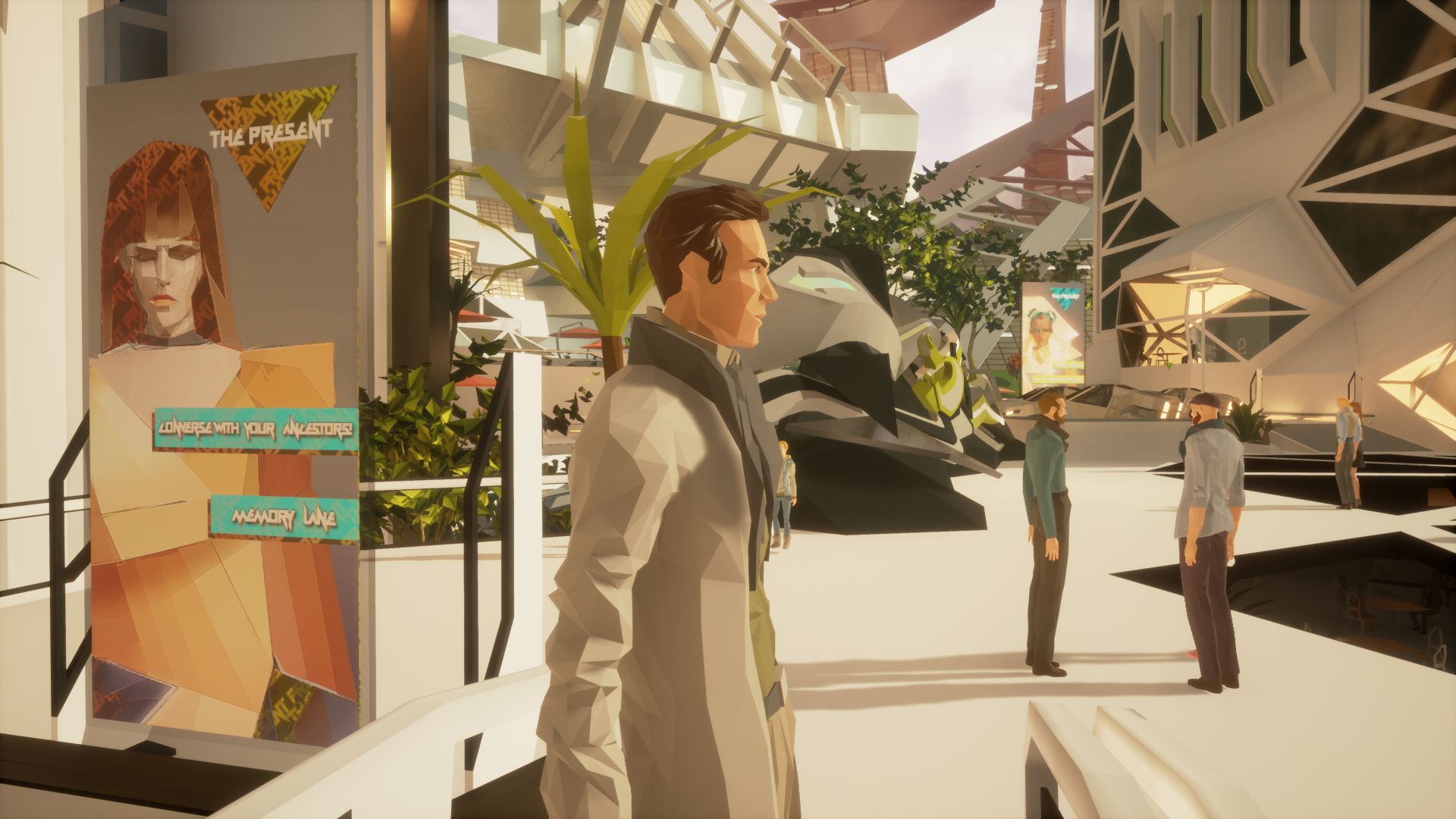 The game follows the conventions of an immersive sim, based firmly in the traditions of a point-and-clicker. You wander around and explore the world by reading notes, and nice little green triangle icons lead you forward to key characters and information. The odd puzzle breaks up this exploration. There’s no big action, no guns or magic powers, just interpretation and player choice, and this makes the game a super chill and laid back experience.

This relaxed feel comes from the game’s excellent world building. There are two main hubs: dystopian Berlin and a futurist paradise called City 5. Future Berlin is thankfully a scuzzy and weird place. It’s raindrops and teardrops and neon lights. One particularly good section takes place in a nightclub called Doomsday. There, despite the ability to build robots that can grasp the finer nuances of emotional psychology, the bouncers are still judgemental pricks, and the Italian disco kids are still smashing pingers like there’s no tomorrow. Flashing lights, lasers, luminous stairways and minimal techno accompany your stroll through the club. One piece of graffiti reads “The Wall is Back”, which made a far subtler and more effective point than the actual plot.

In contrast with this is City 5, a futurist paradise full of sweeping vistas and beautiful modernist towers. The places here have elliptical names like The Present and Infinity Plaza and it's reminiscent, in the best way, of the domed city from Logan’s Run. It’s extremely zen to wander around City 5, and as you do lilting piano music rises and falls as volumetric god rays hit you in waves. (The game’s entire soundtrack is an absolute joy, especially its endless piano melodies.) One particularly beautiful minigame in City 5 had me use a flying drone to fill the inside of a tower with music, lights, disco balls and bubbles. I then got in a hot air balloon and flew upwards through the show I had created. It was like Willy Wonka meets Metropolis and a really nice play between game and cinematic moment. There are lots of nice bits like that in the game, where the plot recedes and you just stop and admire the lovely background. 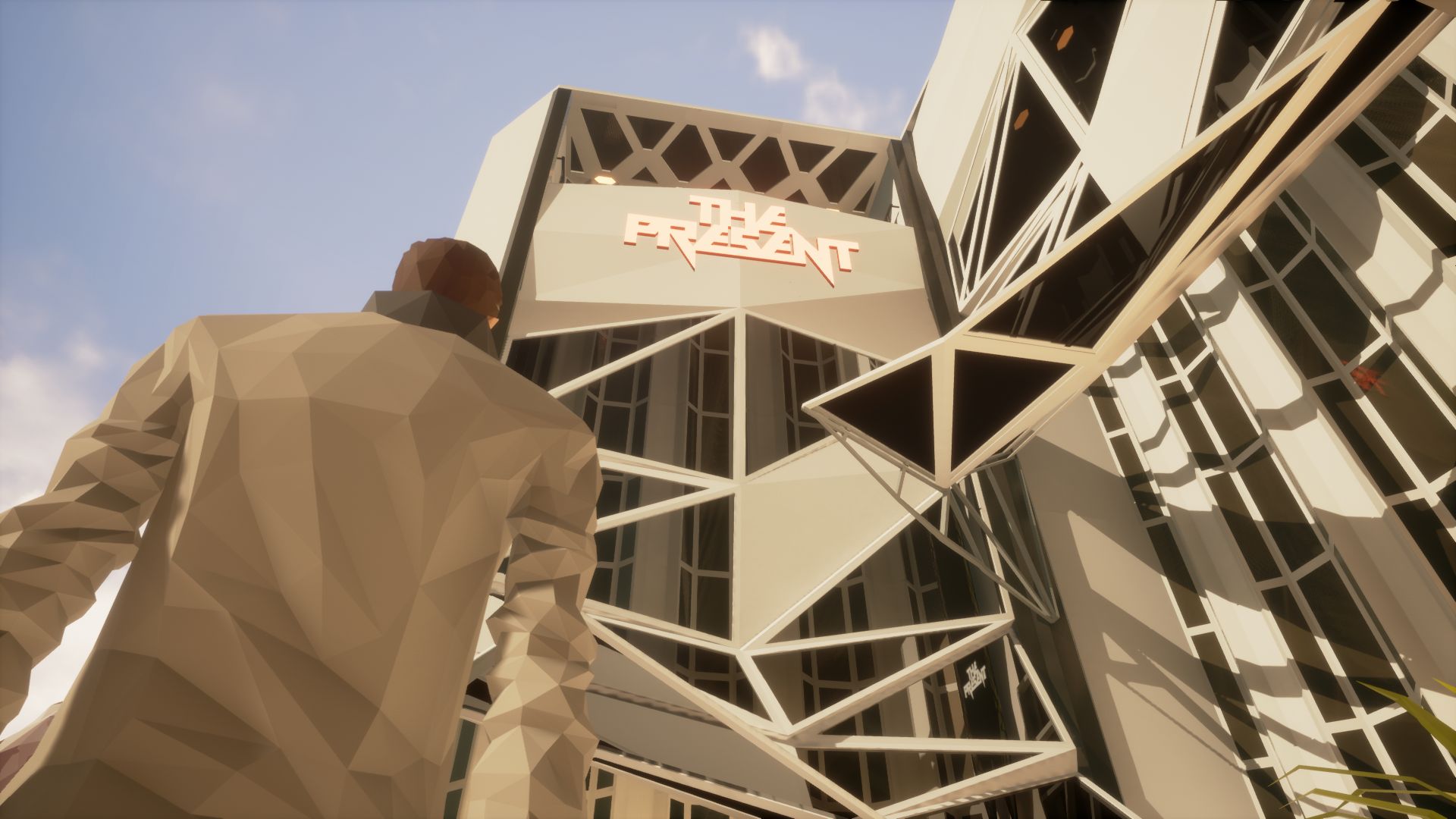 Though the whole game is angular, the character models are in a particularly low-res, polygonal style that stands out against the crisp backgrounds. The intention here is to make you consider the uncanny valley that emerges when people become digitalised and the digital becomes humanised. The people feel imperfect and damaged, and that mirrors their plots. Each of the protagonists has been damaged in some irreparable way by a world where techno-capitalism is on steroids. Richard is a distant father and husband and generally a bit of a prick. Tracey is a pseudo-celebrity starlet. Lydia is an online sex worker, but where online means fully immersive augmented reality. The weird polygons, like the nightclub’s graffiti, succeed in showing us this damage, rather than telling us about it at length.

Another way the game (mostly) succeeds is with mini games and puzzles. State of Mind’s puzzles are usually simple, two step affairs - for example, you might rearrange augmented reality tiles around Richard to figure out a full scene. In another you sort through newspaper clippings to line up the right narrative. Sometimes you’ll use a drone to fly around and stalk people, or unlock doors that Richard can’t reach. Stalking people with drones is, of course, always a good buzz. The puzzles break up the conversation-heavy narrative, and can give you new perspectives on the world, like my lovely balloon ride - though, that said, in a game about the difficulty and ambiguity of solving technological mysteries, I could have handled much harder challenges, with more complicated steps. 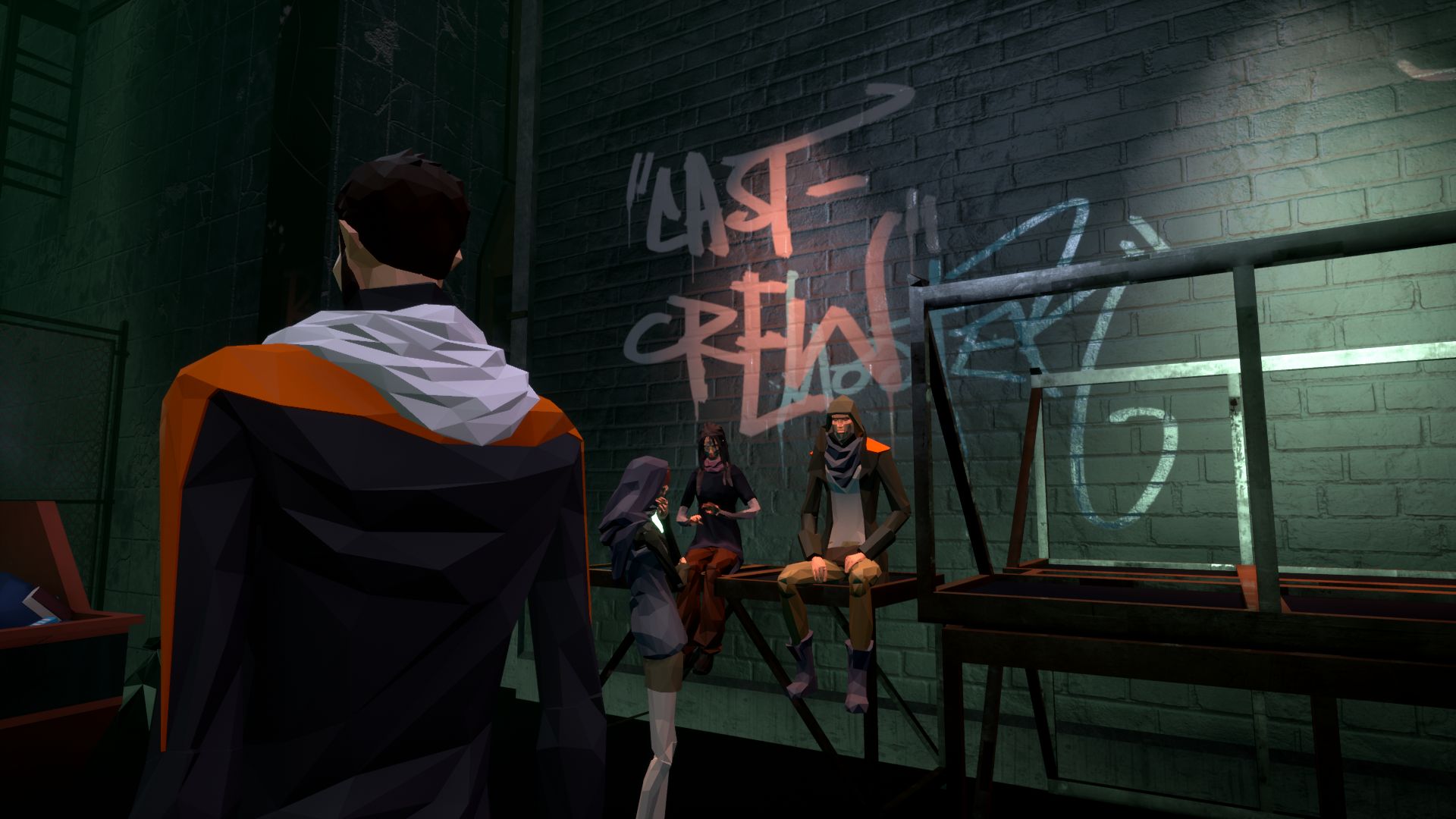 All of this adds up to lots of small things that work really well and are memorable and worthwhile. It’s an extremely chill game, and walking around Berlin and City 5 is a rewarding and pleasant thing to do. Yet, contra to State of Mind’s excellent and discrete world building, and its litany of beautiful and subtle moments, the story is all kinds of batshit, and fails to focus the player on the key tropes and loops that make cyberpunk great.

It’s a real shame. If State of Mind was more minimalist in its plot, and focused on exploring and completing character arcs rather than absurd thought experiments, if it dealt with one or two of the themes of posthumanism, instead of six or seven all at once... we might have had something really special on our hands. Less, as always and never, is more. As it stands, this game is worth your while if you’re up for a lovely stroll around some dystopias whilst drinking tea. If that’s your jam (and for the most part it was my jam), go and play it. If you want more meat than jam then your next great hope might be to put on some Aphex Twin and hope that CD Projekt smash it out of the park.