Premature Evaluation is the weekly column in which we explore the wilds of early access. This week, Fraser’s pottering around in RocketWerkz' space station sim, Stationeers, and learning that, just perhaps, it's better to stay on Earth.

Why is a giant egg on top of my microwave? I’m trying to play through Stationeers’ dire tutorial, but I actually feel like I’m participating in one of Gordon Ramsay’s literal kitchen nightmares. In the egg carton, it was very much a normal-sized, innocuous egg, but somewhere between picking it up and mistakenly putting it on and not in the microwave, it grew at least 20 times larger. And I’m not sure I really should be putting eggs in microwaves. Certainly not to make muffins.

I somehow muddle through, making a muffin that I don’t need and fixing a cable that does nothing. Well done me - I’ve completed the tutorial. Lamentably, I’ve retained very little of the excessively complicated instructions required to perform the simplest of tasks. With unearned confidence, I dive into the game-proper, my head full of dreams of lunar bases and SCIENCE. It is dark, I’m alone and I have no idea what I need to do. 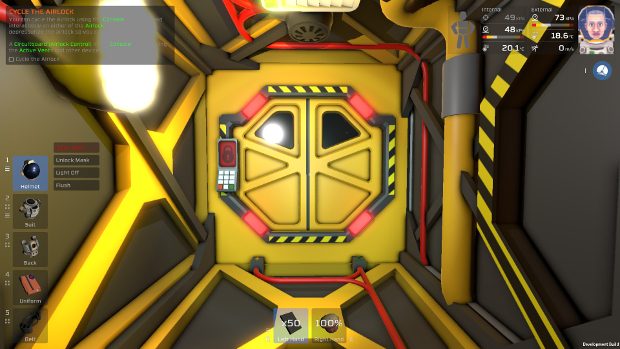 Since the tutorial barely even covers the most basic parts of constructing a functioning base right now, I have absolutely no idea where to begin. I guess my base will need a floor, so I root around in the crates and pick up some metal sheets. I can't do anything with them. Next to them are some metal frames, and this time I'm actually able to place them. Progress! But what's a floor without some cool stuff to put on it? Unfortunately, I'm getting ahead of myself and the floor, it turns out, still isn't finished.

A 30 minute break and a browse of the wiki fills in the gaps. To finish the floor I need to use the sheets I discarded before, applying them to the frame while I'm holding the welding tool in my free hand. After multiple trips between the site of my base-to-be and the containers, and a bit of inventory faffing, I finally have the start of my first building. It feels more of an achievement doing it in the dark, guided only by my useless headlamp. Annoyingly, while I've been wandering around blindly my power has been dwindling and I can't charge my battery on an empty floor. I've got to set up a charging station, which means I need a power controller and a solar panel too. At least the sun is starting to come up now. 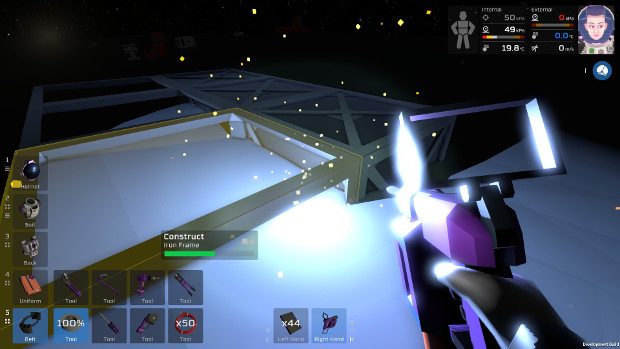 By the time I finish, it's dark again and my solar panel is useless. I can't do anything until the next day. I stare at the stars until that gets boring, then I bring up my inventory. Alarms go off and my computer warns me that everything is bad and I'm going to die. It's almost like I’ve opened up my suit. Because I have. To see my inventory, I automatically hit ‘I’, which doesn't open the inventory but rather dangerously opens my helmet. By the time I realise my fatal mistake, I'm about to walk into the light. Thankfully, that light is the sun, and with my helmet sorted I can go back to my previous task of getting some power. Soon I'll be running on fumes, so I'm in a bit of a hurry.

This isn't something you could tell by the pace of my work, which could only be described as sloth-like. Stationeers wants you to know that it’s a very hardcore game. Unfortunately, hardcore is so often conflated with lack of user-friendliness and intuitive systems and that's the case here. It’s not just that every task has twice has as many steps as a reasonable person would come up with, though that does grate, it’s that actually performing tasks is typically dull. Indeed, most of them involve standing around while you wait for the right time of day or watch a furnace working away. 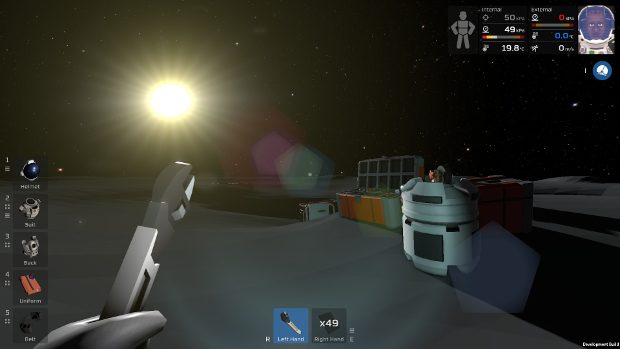 RocketWerkz seem to be perfectly capable of ditching realism when it gets in the way, but at other times it’s like Stationeers is built on a love of drudgery. With my solar panel standing, I now have power, opening up a whole world of possibilities. Unfortunately, my minor goals require a bit more work. See, the panels need to be directly facing the sun, and as you’re probably well aware: the sun moves a lot. Like, all the time. There are undoubtedly many solutions to this problem, but Stationeers settles on the one that makes players use a wrench to manually raise or lower the panel, to catch the light. When night fell again, this time I was actually pleased, as it meant that solar panel duty was over.

It’s peculiar, playing a game from one of the progenitors of the modern sandbox and realising that it’s already incredibly dated. DayZ is, in video game terms at least, a household name associated with all kinds of thrilling, hilarious and horrific stories (and a whole lot of waiting and walking in between those moment, it must be said). Its successor has somehow managed to make the creation of a simple muffin a pain in the arse.

As a friend watches me follow the instructions of the wiki, amazed at how much dreary busywork is involved in creating the simplest of manufacturing chains, I struggle to justify the the time and effort involved in slapping together a space station. Fundamentally, Stationeers has yet to construct a slice of space, let alone a galaxy, that actually makes it feel like you’re having an impact on the universe. 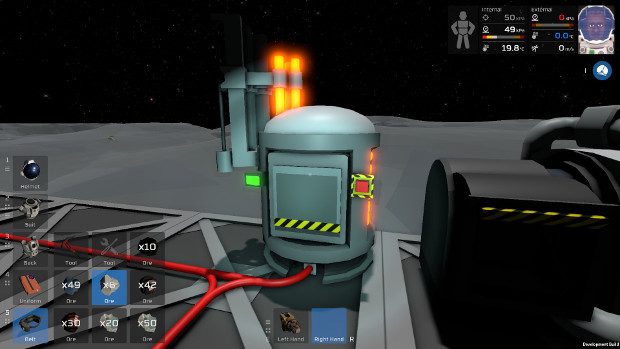 There's nothing holding it together at the moment. It’s more like Space Engineers than DayZ, but unlike the long-running early access creative sandbox, it keeps its best bits at arm’s length. I vividly recall my first experience with Space Engineers. Within an hour I’d constructed a war-ready spacecraft that I pitted against an equally intimidating war machine of a pal’s design. We flung our babies at each other, and watched as they both bounced off each other and rapidly drifted off into deep space, much faster than we could travel. It was a hilarious comedy of errors that made Robot Wars look well-produced. In an hour of Stationeers, I figured out how not to suffocate.

The comparison isn’t unfair. Both are early access games with similar goals. But Stationeers expects you to put dozens of hours and countless wiki breaks into it before it becomes remotely cohesive. It’s hard, boring work. By the time I construct a 3D printer and a proper furnace, the things needed to create the more advanced items, I lose all motivation to construct ships and bases. I saunter off into the darkness, thinking that maybe spending some time mindlessly mining will make me happy to get back to my construction projects. A few minutes later and I've fallen down a hole and broken my suit, the two most exciting things to happen to me all day. My jetpack could get me out... but do I even want to escape? 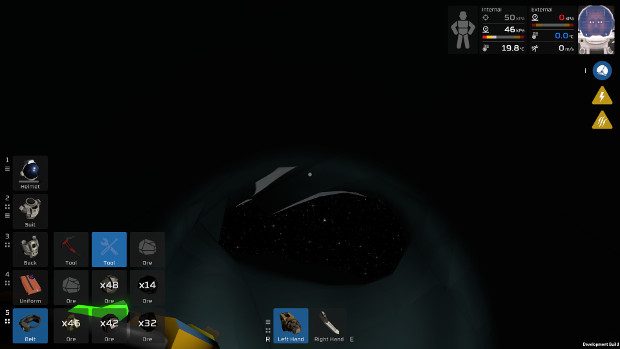 Stationeers is, at the moment, a series of loosely connected systems, but without the creative, anything-goes philosophy or many of its sandboxy peers. I never thought anything could stop me from building a spaceship or an intergalactic Little Chef, but a browse of the steps and work involved has made me realise I’d be willing to do anything else. Even spending the rest of my life in this big ol' moon hole.