Right, well, I've had a month off writing this it seems, so it's time to check that Brendan and Alice have been looking after the Steam Charts properly. Obviously it requires regular watering, and perhaps most importantly, weeding, to prevent things getting out of contr... ALICE AND BRENDAN! COME HERE IMMEDIATELY!

Honestly, I turned my back for 41,760 minutes and the entire thing has collapsed into madness. According to Steam's official figures for top grossing games of the last week, Far Cry 5 occupies six of the top ten spots. And look, you might want to sit down: Plunkbat isn't at number one.

It's good to know not everything's broken. At least I can still feel the will to live slipping away at seeing the words "Counter-Strike: Global Offensive" appearing in my RSS feed.

To punish everyone for this, I give you the image above. 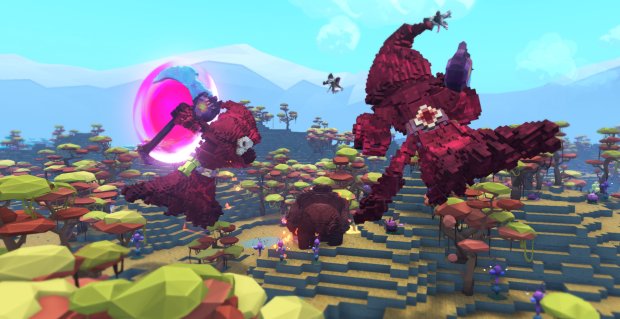 There was a part of my wilting husk that saw this name and thought, "Oh! Hooray! Something new in the charts! And then I found out what it was, and the decay continued.

Imagine if you took Ark, that most omnipresent of games, and combined it with Minecraft, that most omnipresent of games. You'd get PixARK, a mixture of the two, as if Ark weren't already a mixture of Minecraft and dinosaurs and death, except PixARK doesn't have the death. Or something. I don't know, I'm too busy watching games collapse in on themselves like a dying star.

But what does this even mean? I don't know how to... no, it's important that we maintain control in times of crisis. So here is a song. A song will get us through:

We're still devouring Far Cry 5's lunatic contents, equally delightfully and maddening, fun and and dreadful, and you can find all that discussed via a click on the name above.

But what you're really wondering is how it's occupying six different spots, including Plunkbat's. The answer is, you'll be fascinated to learn, we don't know! We've tried to guess at how these ridiculous charts are compiled and every time some other factor seems to thwart our best theories.

We'd ask Valve, but they'd be far too busy making games to get back to us.