This feels like a milestone - a sexy milestone. When Valve said that under their new content warning system, there'd be fewer restrictions on what could be sold on Steam, I was sceptical. Now it seems they were true to their word. If nothing goes wrong between now and its launch this Friday, saucy visual novel Negligee: Love Stories will be Steam's first uncut sexually explicit game.

Accompanying this, Steam now has an Adult Only section which is filtered from store searches by default. If you don't want to see games with naughty bits, you won't - not unless you ask nicely.

Announced via a Steam forum post yesterday, Negligee developers Dharker Studio confirmed that Valve had approved their comprehensive content descriptor for the game. Having cleared the review process for adult content (which seems to actually involve real humans), the game is now set for release on Friday, September 14th. Here's the description that Dharker used:

While anyone can link to more adult games on Steam and see an up-front content warning, I noticed that a few games had gone conspicuously missing from my Steam store search results. Most notably, Christine Love's Ladykiller In A Bind. It and a handful of other games have been flagged as 'Adult Only' material, and will not appear unless you go to your Steam Preferences page and click the box to show explicit sexual content. There are also toggles to blur or warn about extreme violence and nudity in user-generated content, although these are disabled by default. 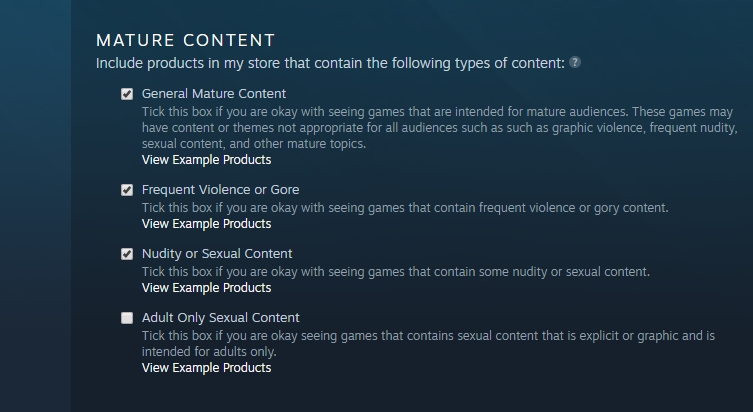 While a little hazy, the definition between Sexual Content and Adult Only Sexual Content seems to be in explicit focus. The Witcher 3, Path Of Exile and Conan Exiles are marked as games containing nudity, but a few previously-borderline games like Ladykiller In A Bind, Waifu School (ugh) and Bloody Boobs (URGH) fall into the new category. A very American divide - no level of ultra-violence can be considered worthy of being Adult Only, but the moment someone's pants come off with salacious intent, it's a whole new ball game - pun fully intended.

While I've some concerns regarding this new system, I'm pleasantly surprised. I honestly didn't think Valve - being a large and cautious American company - had the nerve to allow what many would consider pornography (and in many cases they'd be right) onto Steam. Now I'm curious what the next step is, especially for the many games that were originally more explicit, but were cut back for a Steam release. Many have offered official (sometimes even sold) content patches elsewhere to restore the naughtier bits. Will these patches be included as standard? Only time will tell.