Almost eight years after Google shut down their experimental feature showcase, Google Labs, Valve have rolled out their own take on it for Steam. Steam Labs is a showcase of some of the "dozens of experiments around discoverability, video, machine learning, and more" that Valve produce for their store. So far, there's three to poke around - "Micro Trailers", "Interactive Recommender" and "Automatic Show" - and while the first two are useful, they're not the freshest of ideas. The third is just a half-hour of machine-generated awkwardness. Check out the labs page here.

The first experimental Steam feature is Micro Trailers, named after and based on the "Steam Trailers in 6s" Twitter bot by Dejobaan's Ichiro Lambe. Machine-produced abridged trailers, snapping a handful of shots from a larger promotional video and serving them up as a tweet-friendly loop. They experiment a bit with the formula here, showing off possible themed 'rows' of parallel micro trailers, or more detailed 2 x 2 blocks from a single game. There's even a set of these "Big Quad" videos based on Rock, Paper, Shotgun's curator page. Give it a peek. 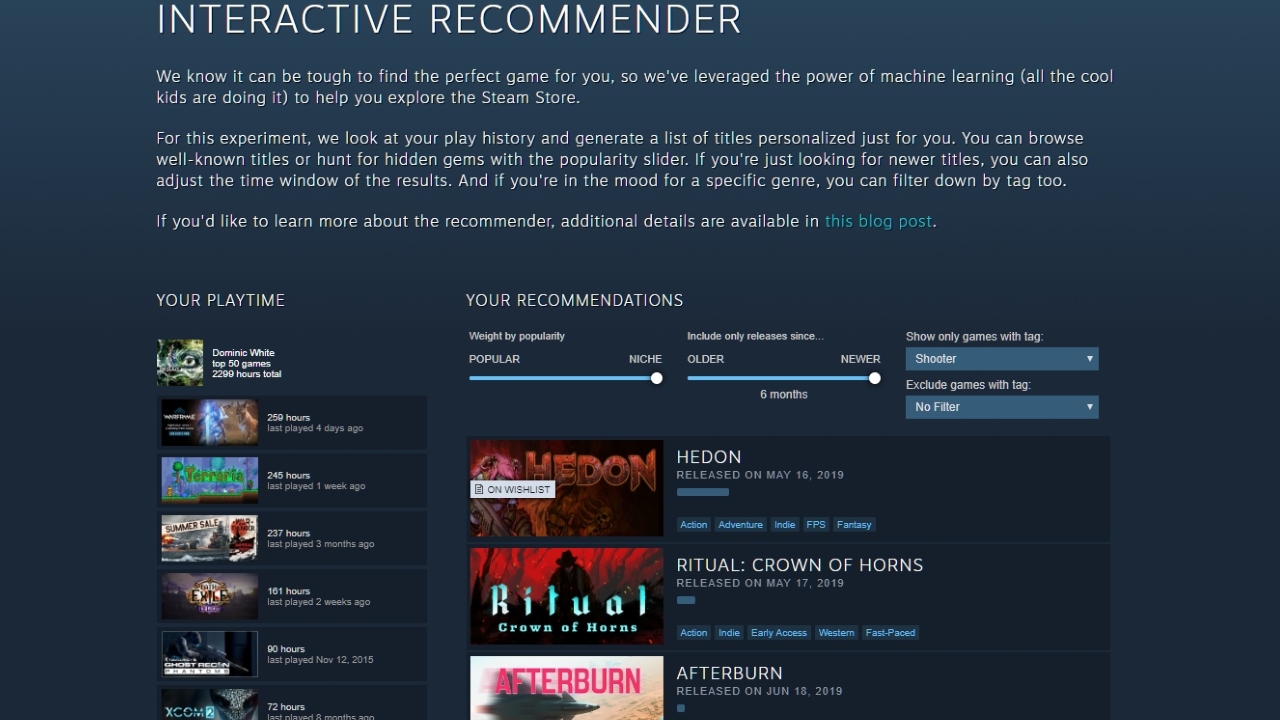 In my opinion, the best of these features is the Interactive Recommender. Steam's recommendations have always been sketchy, but this lets you narrow things based on popularity, the age of the game and lets you use tags to include or exclude. At its most niche, it reminds me of the Top 250 Best Hidden Gems list, only tuned to preferences based on what games you play. Still, my results may be skewed by my 'most played' games being ones with launchers I forgot to close. With a few more options, I could see this being a boon for shoppers looking for something a little different.

Last up is the baffling Automatic Show, a half hour of loosely connected microtrailers playing back-to-back with a button to take you to the relevant store page. A robot made this. A robot that doesn't know you, or your desires. The robot that only knows what is trendy. Videogames are trendy. You will watch videogames. Apparently earlier versions of this even had an automated robo-voice announcing each game. Mercifully, they didn't use that for the final cut. Who is this for? I don't know. Maybe it could play in actual, physical stores to sell Steam cards? Weird.

So, a potential glimpse at the future of Steam. Perhaps those micro trailers will feature in their upcoming library re-design? It'd probably fit better than the undoubtedly mismatched art we'll be seeing from developers that haven't updated their box art. Perhaps that's something they could automate production of next. While I'm fairly pleased with the new recommender tool, how does it work for you lot? Any surprises?