Narrative-driven games aren’t normally a comfortable fit with piecemeal early access development - it’s harder to offer a compelling vertical slice of a story that’s meant to be viewed as a whole. This isn’t Failbetter Games’ first rodeo, however; the studio has already had one successful early access game in Sunless Sea. Like its predecessor, Sunless Skies has another advantage: it’s a game about making and experiencing your own story through evocative vignettes and quests, rather than following a prescribed narrative.

So, jumping into my space-train, I’m free to do whatever tickles my fancy, within the confines of the game’s first region, the Reach. Everything is immediately familiar, as Sunless Skies shares a great deal of its structure, mechanics and language with the previous game, as well as its browser-based progenitor, Fallen London. 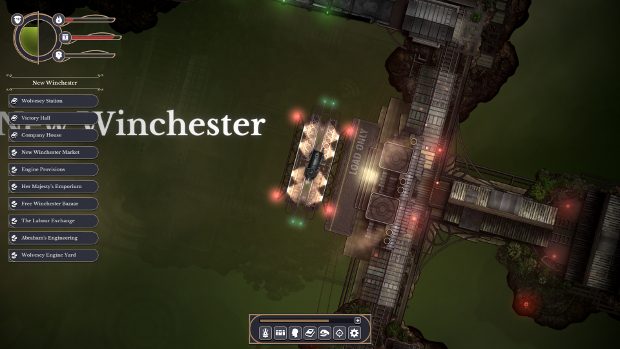 Captains are defined by the stories they experience, the terrors that they meet and their stats: heart, iron, veils and mirrors, roughly corresponding to health, strength, subtlety and intelligence. These traits and stats determine the outcome of the Choose Your Own Adventure-style encounters, your effectiveness in real-time combat, even how well you handle floating off into the uncaring void. Fear and nightmares are just as serious threats as big ol’ space monsters.

Ostensibly, Sunless Skies is part RPG, part trading sandbox, allowing you to bounce between jetting off into the unknown in search of adventure and hitting up lucrative trade routes, all while trying to keep your locomotive supplied with fuel, food and a crew that isn’t descending into insanity. But what it really is is weird. Delightfully, befuddlingly weird.

Set at the dawn of the 20th century, it takes the Industrial Revolution and British colonialism and throws them into space. So Isambard Kingdom Brunel is no longer known for the Great Western Railway, but the Isambard Line, a railroad that connects the underground city of Fallen London with the Reach. That’s hardly the strangest attraction; it’s a cosmic wilderness where floating forests sit next to empty circuses built on asteroids, and where time is a tangible thing that can be mined and controlled, used to power locomotive engines and extend lifespans. 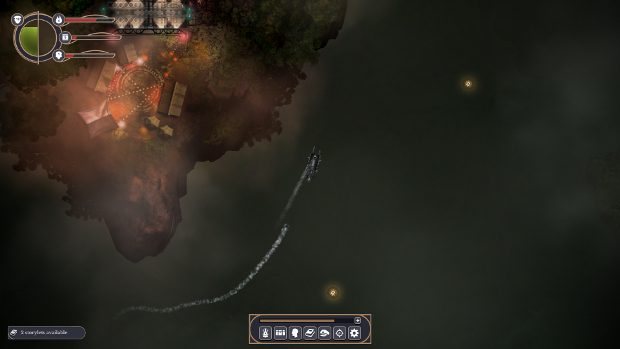 Despite being utterly bizarre, and though its early access form is slight, Sunless Skies is blessed with a strong sense of place. Though the heavens are new territory for Failbetter, the wider setting is the same universe that the studio has nurtured for the better part of a decade. It has its own vocabulary and a history players have lived through via Fallen London and Sunless Sea, and more importantly it has this consistent Failbetter tone that’s hard to describe precisely, but that is immediately recognisable - something like H.G. Wells meets Terry Pratchett.

Somehow it manages to feel whimsical and playful, even though it’s only ever one bit of bad luck away from delving into skin-crawling horror or all-out civil war. Even the two factions duking it out over the Reach - the London loyalists and the independent-minded settlers - have these oh-so-very English nicknames: the Stovepipes and the Tacketies. The former is a reference to the top hats worn by the Fallen Londoners, while the latter refers to the the hobnail (or tackety) boots that the settlers wear. These incidental details become incredibly meaningful in a game where you only ever see the exterior of buildings or the occasional character portrait. 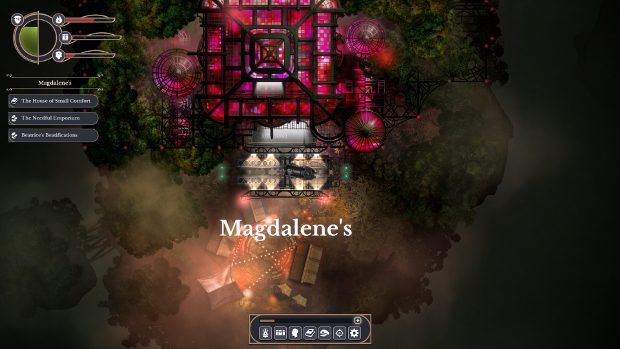 The conflict between these factions is a tug of war that promises to add some dynamism to space, though there’s only a hint of this in the early access version. Back at the start of the year, I had a chat with Failbetter’s Liam Welton and Chris Gardner, the game director and narrative director respectively, and they described some ambitious plans. Tacketies might rise up and start taking over London ports, for instance, changing the missions, trade goods and stories available there. These changes could happen with or without player involvement, and even if your captain dies, the changes to the world would persist.

Right now, though, it’s mostly just very quiet. And empty. The Windward Company - an analogue for the East India Company - pays for Tackety bounties, you can sell information to either faction, and your allegiance will occasionally be questioned, but the war itself is currently consigned to placeholders. And with only the Wealth ambition active, which tasks you with getting rich, retiring and settling down, it’s a little too aimless, even for a sandbox game. This is exacerbated by the fact that there aren’t currently many ways to make money, though the game makes this clear from the outset and gives new captains some extra supplies to make the start a little easier. 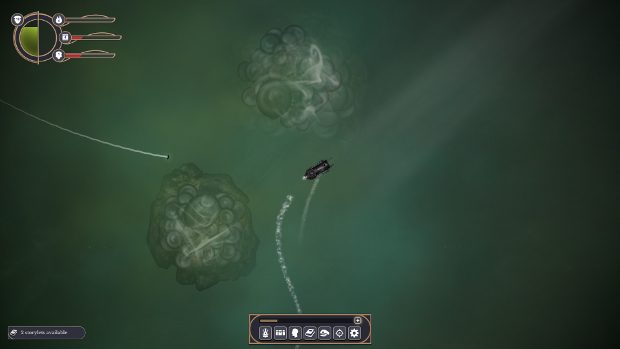 This did not, unfortunately, stop my first venture from ending in disaster. Paid to bring a passenger to a distant port, I set off with a content crew, plenty of food and an abundance of fuel. We drifted through the void for a long time, burning through our supplies, but eventually found ourselves in a destitute circus full of miserable performers and an audience of slumbering vagrants. We stocked up and set off once more. We got lost in a eerie green fog and then turned around in a huge tangle of vines, but still couldn’t find our destination. And then the food ran out.

With my crew starving, morale started to drop. I tried to cheer them up by getting stuck in, working alongside them, and thanks to the often fickle gods of RNG, I rallied them for a time. The first corpse was found in the engine room. Hunger had made one of the crew sloppy, and it cost them their life. A choice: give them a sky burial or save the rest of the crew by turning them into dinner. We ate well that evening. 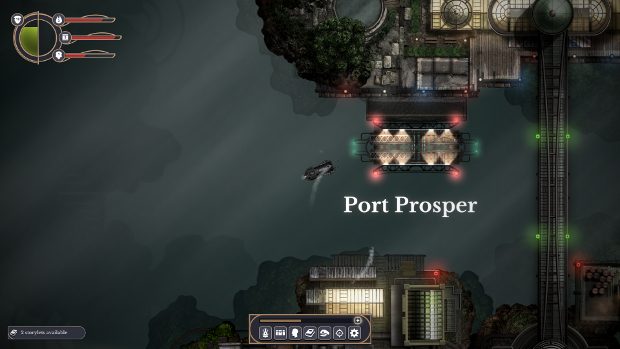 Another corpse, another meal. This time, there was a change in the crew. Those who ate their fellow crewmember had developed certain… tastes. They prowled the locomotive, looking for more corpses. It happened again and again, until my crew of ten had dwindled to a trio. A skeleton crew of cannibals. Eventually we reached our destination, but the game remembers what we did, and I can’t help but wonder if I’m going to pay for all the feasts.

Starvation seems to be a much greater threat than any space creatures or other locomotives. Most of the things I’ve encountered have been passive until attacked, mercifully giving me a reason not to get into too many fights. The locomotives feel faster and, thanks to port and starboard thrusters, more maneuverable than their Sunless Sea counterparts, but the effect of the game’s physics, the floatiness and momentum, make them about as precise as a blindfolded drunk. It just feels all wrong. Failbetter scrapped Sunless Sea’s first combat system during early access and I can only hope that similarly big changes will take place here as well. 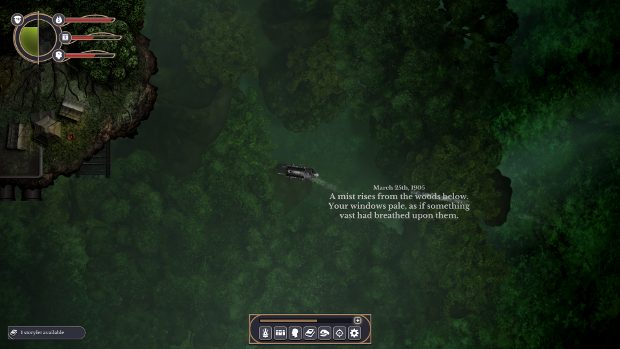 Combat aside, I’m already as ravenous for more Sunless Skies as my captain is for human flesh. The Reach is fascinating, and with every brief conversation I find it more compelling. I’ve been hanging out with a group of academics - which seems appropriate, as my captain is a scholar of the language of the heavens - who have been debating who’s buried in a peculiar place known as Traitor’s Wood. Is it Charlamagne? Did he venture into space? Or Maybe it’s Saint John the Apostle. We’re mounting expeditions to find out. I’m also trying to fill my coffers so I can help the Horological Society build a massive clock. They want to make sure that lunchtime in Fallen London is the same as lunchtime in the Reach - a noble endeavour.

Lack of cash and opportunities for character progression are making some of these ventures a challenge, however, so I’m stuck until the economy improves.

It’s a promising start. There’s only about a quarter of the game available, and even within that I haven’t been able to get very far without embracing the monotony of the grind. I haven’t seen all that I can in this early access version, but I’d rather wait until the journey itself is more developed, with additional stories and a functional economy, before venturing any further.