If you click on a link and make a purchase we may receive a small commission. Learn more.
Developer: Failbetter Games
Publisher: Failbettre Games

On the one hand, a certain ennui - I have seen all this before, I have made these long, fraught voyages before, many times, in its fine predecessor Sunless Sea.

On the other, late at night my thoughts drift, unbidden, back to its dark places, its lonely ports and clockwork suns and frozen voids. Places that left impressions, places that told me unsettling stories and implied many more stories still.

Sunless Skies exists on the intersection between roguelite (i.e. unforgiving, survival-tinged roleplaying, with permadeath options) and interactive fiction. You're the captain of a spacefaring locomotive, seeking to explore a refreshing new take on galactic civilisation that includes an interplanetary Victorian empire, murderous beasts of the vacuum and what might just be the lords of the afterlife.

Fuel and armour (for your fragile craft) and food (for your fragile crew) must be maintained, the uncharted skies must be charted, pirates and predators must be shot to death and the beautifully written problems of assorted esoteric quest-givers must be solved. Well, not 'must' - Sunless Skies is to some extent what you make it, the goal only to survive and, eventually, thrive. You won't manage much without exploring the heavens and completing some of the stories told about and by the denizens of this cold and lonely star-system.

Sunless Sea hasn't left my hard drive since release, and though I've not played it for a while, it's still fat with the promise of unfinished business. Ports I had not found, characters I had yet to displease, indescribable horrors I had still to be soul-flayed by. It is not a game easily 'finished'. It is not a game that quickly stops giving. So many bites of burger still to take. I haven't even played its expansion pack yet. 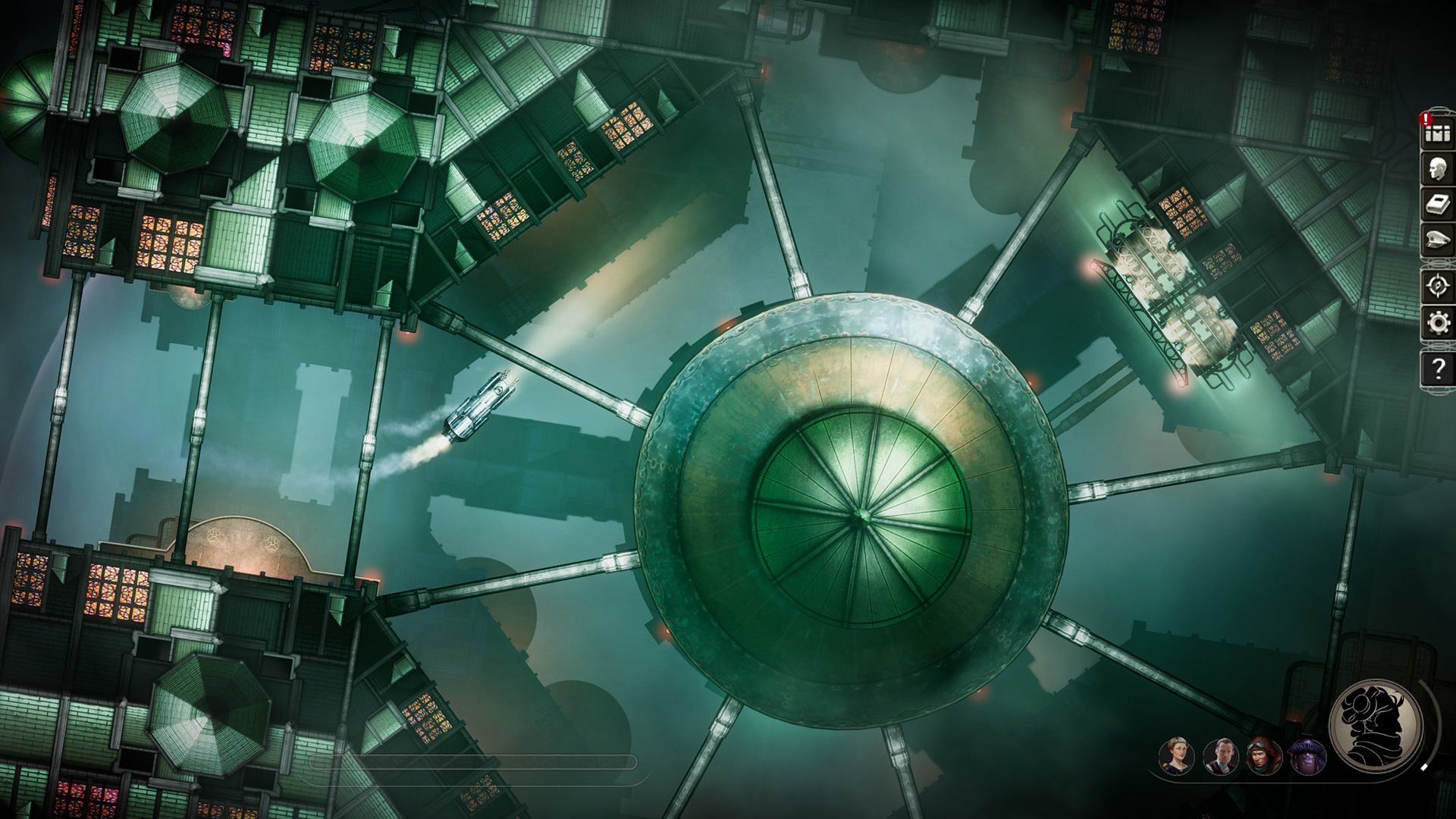 Sunless Skies' burger has a number of thoughtful new toppings and a higher grade of bun, but the patty's the same. For all the remarkable degree of craft on display in Skies, there's an underlying shortage of ambition - this is refinement more than anything. And, given that the fabulist fiction of the Fallen London universe (to which this belongs) is specifically designed for endless possibility, performing the same trick twice feels a little discordant.

I'm not screeching about novelty for the novelty's sake, but rather because some opportunities to make a meaningfully better sequel have been missed. I'll come back to specific shortcomings later, but first, the unequivocal good news is that Skies is without doubt a better game than Sea. Skip Sea and come straight here if you've never dabbled before. And, if you loved Sea inside and out and hunger always for more, clearly you won't be disappointed. 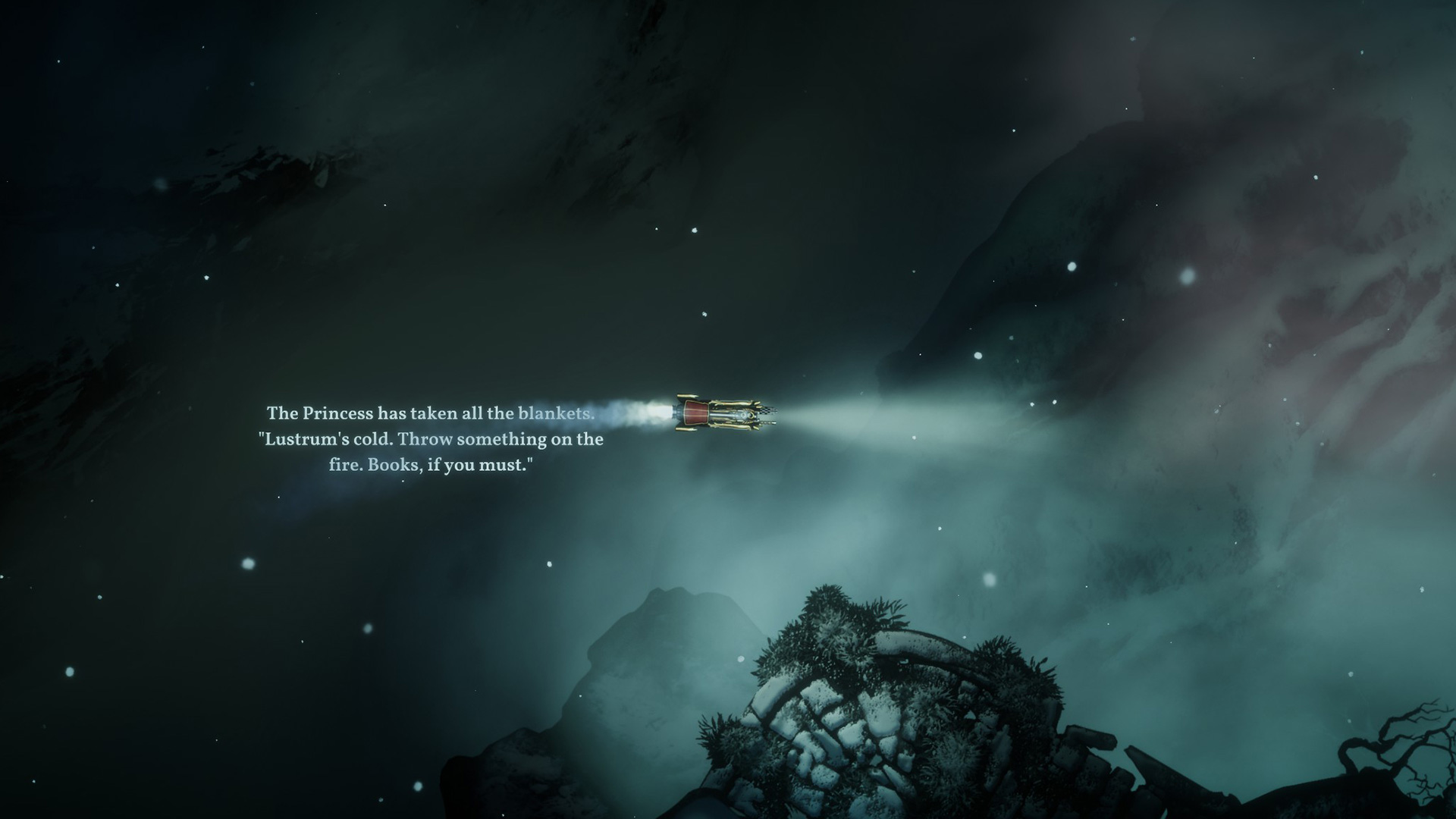 It's not only an improvement in terms of its more ornate art and more elegant presentation but also its scale and grandeur. Sea now suddenly seems so flat and plain, its interface geriatric, where little touches in Skies, like crew comments overlaid onto the skies around you, really lift it. It's careful to, through implication and aside, weave its many short stories into a more inter-connected world, with rules and squabbling factions and spiritual authorities and slowly shifting status quos and a sense of an aeons-old mythology. Furthermore, you don't move only between lands in Sunless Skies, or only between worlds - you can move between planes of existence. This is a grand odyssey of the imagination, borne aloft by consistently curious and characterful writing.

Once in a while, some of its Holy Bible's worth of text succumbs to too-purple prose, a soup of adjectives and portentous names with little behind them, but in the main it holds the line between the deft weaving of a scene and death by anything-goes lore excess. 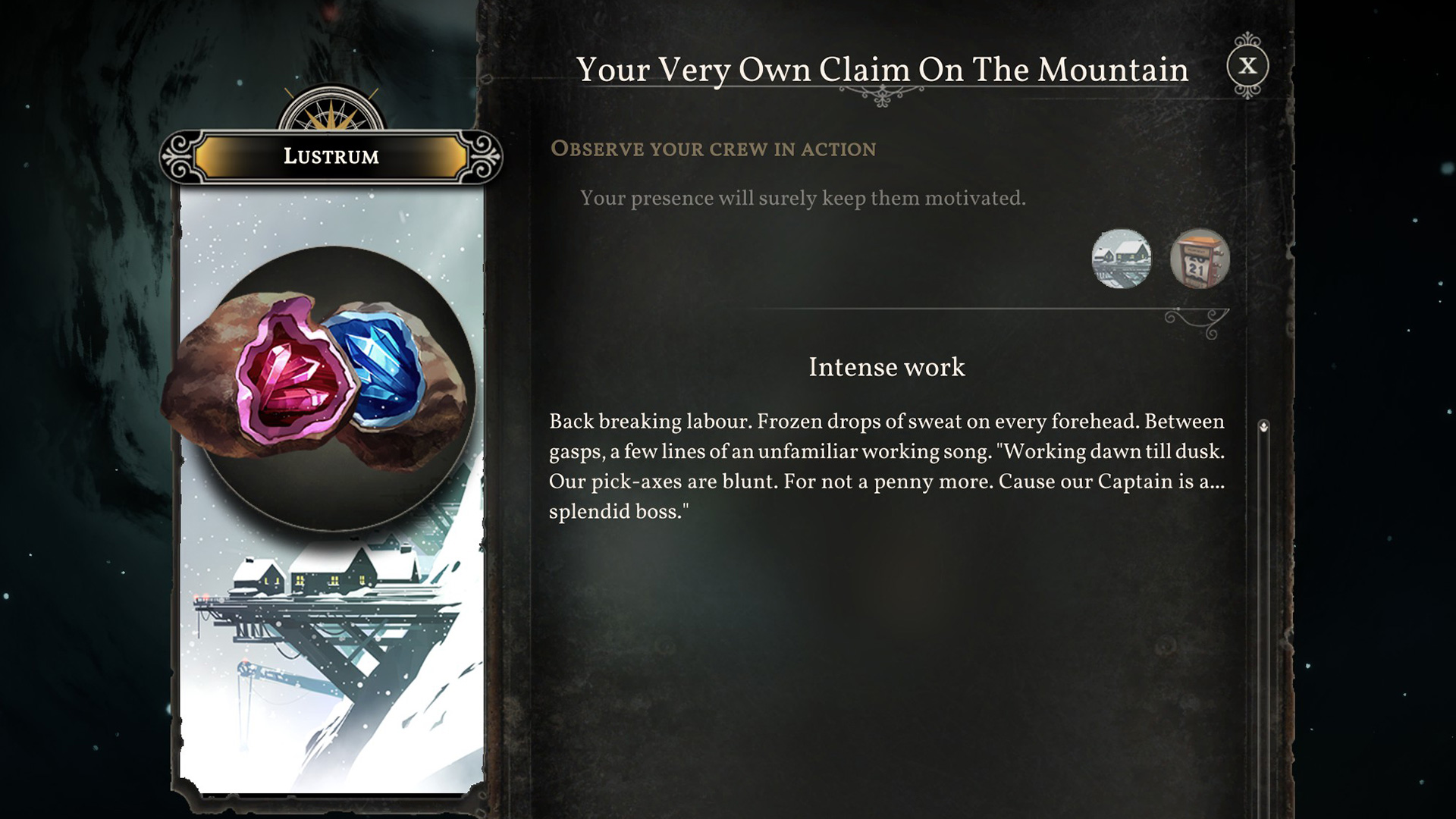 Visually, it knows when to show and when to tell too. A city atop a giant space-flower, yes, that we see; the hive of life atop and around it, yes, that is smartly left for the stories its thumbnailed denizens share with you. It understands well when to let your own imagination step in and fill in the gaps, rather than rush headlong into its own technical limitations by showing too much. Characters, both endearing and chilling, do far more with a few lines of acid text than all the mo-cap in the world could ever hope to achieve.

But if there's a place where imagination can't do the heavy-lifting, it's that Sunless Skies rarely feels like a sky-borne game. Though there is no shortage of startling sights 'beneath' your locomotive, great yawning expanses and looming rocky oddities and frozen cities and relics of dead gods, the overall effect of its top-down perspective is more that of gazing upon murky garden pond than an infinite beyond. Something is off about the sense of depth, while the astro-train you pilot feels more boat than starship. There is no Z-axis for the movement, so this space-place is a flat plane, oceanic not cosmic.

To be clear, I neither expect or want a game with more than enough moving parts of its own to try to be Homeworld, but I do find myself wishing this had run its cosmic ball a little further.

There are a few exceptions, most notably Albion, home of imperial London and a nightmare place of titanic industrialism, where colossal engines honk and wheeze beneath you. Here, Skies unquestionably achieves the visual immensity it shoots for, as do some other surprises.

Outside of presentation, Skies makes some attempt to tackle what was, for some, Sea's central barrier to joy - that completing its quests or growing in capability invariably requires slowly schlepping around a vast and lethal place to obtain particular items. Without them already in hand on first arrival, many conversation or upgrade options at a new port were closed off. So back you went, and then back again. We call this 'grind.'

Sunless Skies is much better about this. Rarer is the time that you can't even get through the door of a new place. Invariably, there's something you can do, someone you can talk to, some new quest you can take on, some ongoing project you can check in on. In consequence, there's less sailing back and forth between the same points for a single item - you'll be spinning multiple plates and going on multiple diversions, which helps ameliorate the sense of looping the same activities. 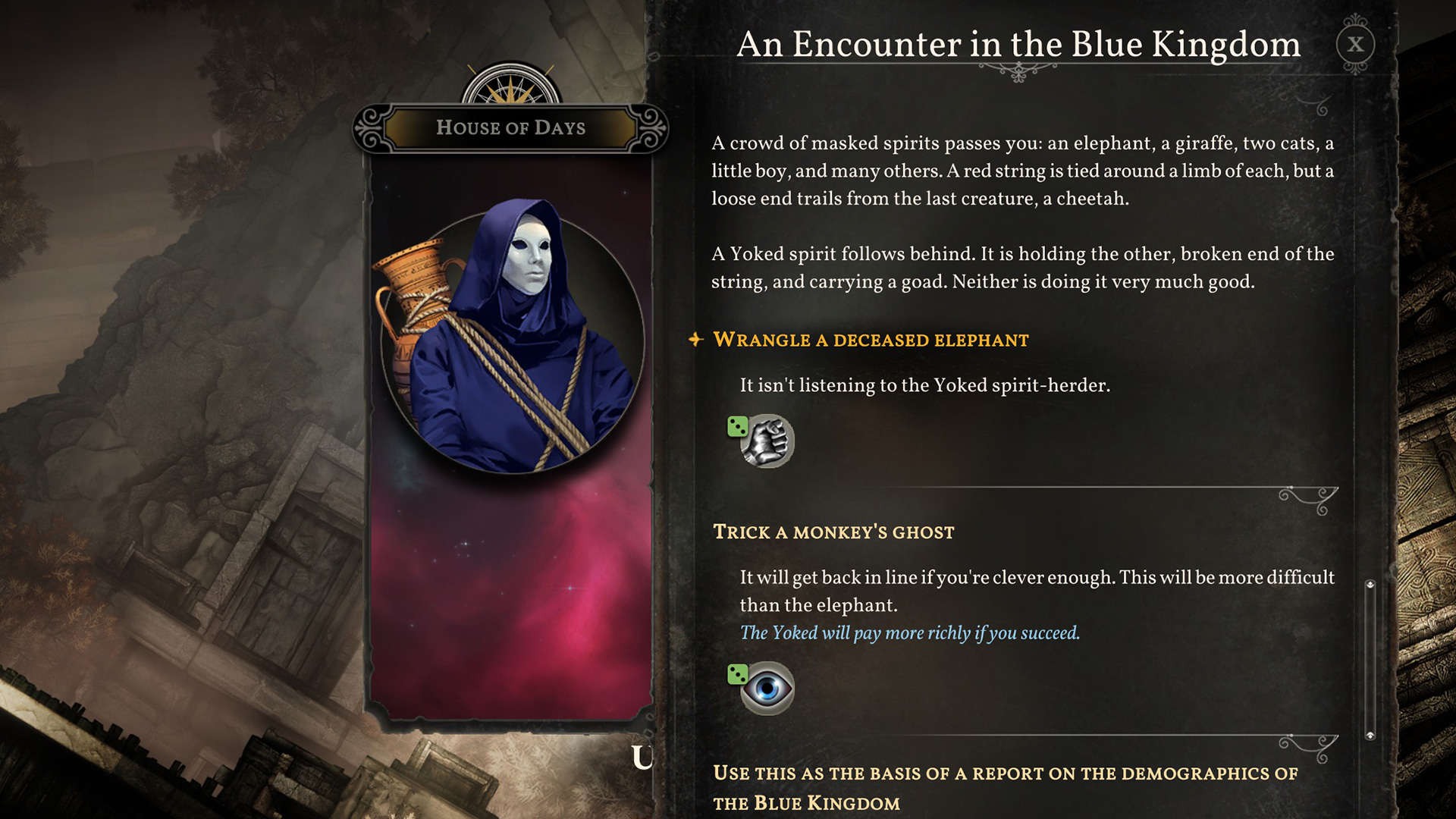 This is what I mean when I say the scale feels bigger, which matters far more than the number of locations. But it too often defaults to 'get a box of weirdly-named things from there and bring it back here for a reward', which also falls into Sea's problem of having a confusing inventory heaving with miscellany, all with names so outlandish that they end up sounding somehow the same.

The stories are a joy; the steps required to unlock their glimmering conclusions can be a drag. For that reason, I found myself eventually eschewing the traditional iron man mode of play, in which only a small measure of your progress is passed on to a subsequent captain should you perish. (And you will die, often - either by running out of resources as you strive to reach some distant new harbour, or at the talons and cannons of beast or bandit).

Merciful mode, which allows the reloading of saves, robs Sunless Skies of some lethal menace, but does leave me free to revel in its world, explore its farthest reaches and darkest secrets. To soak, languorously, in all the curious delights the developers have poured out for us - clockwork suns and ape parliaments and time vortexes and monocled mushroom-men and hospitals for the soul. 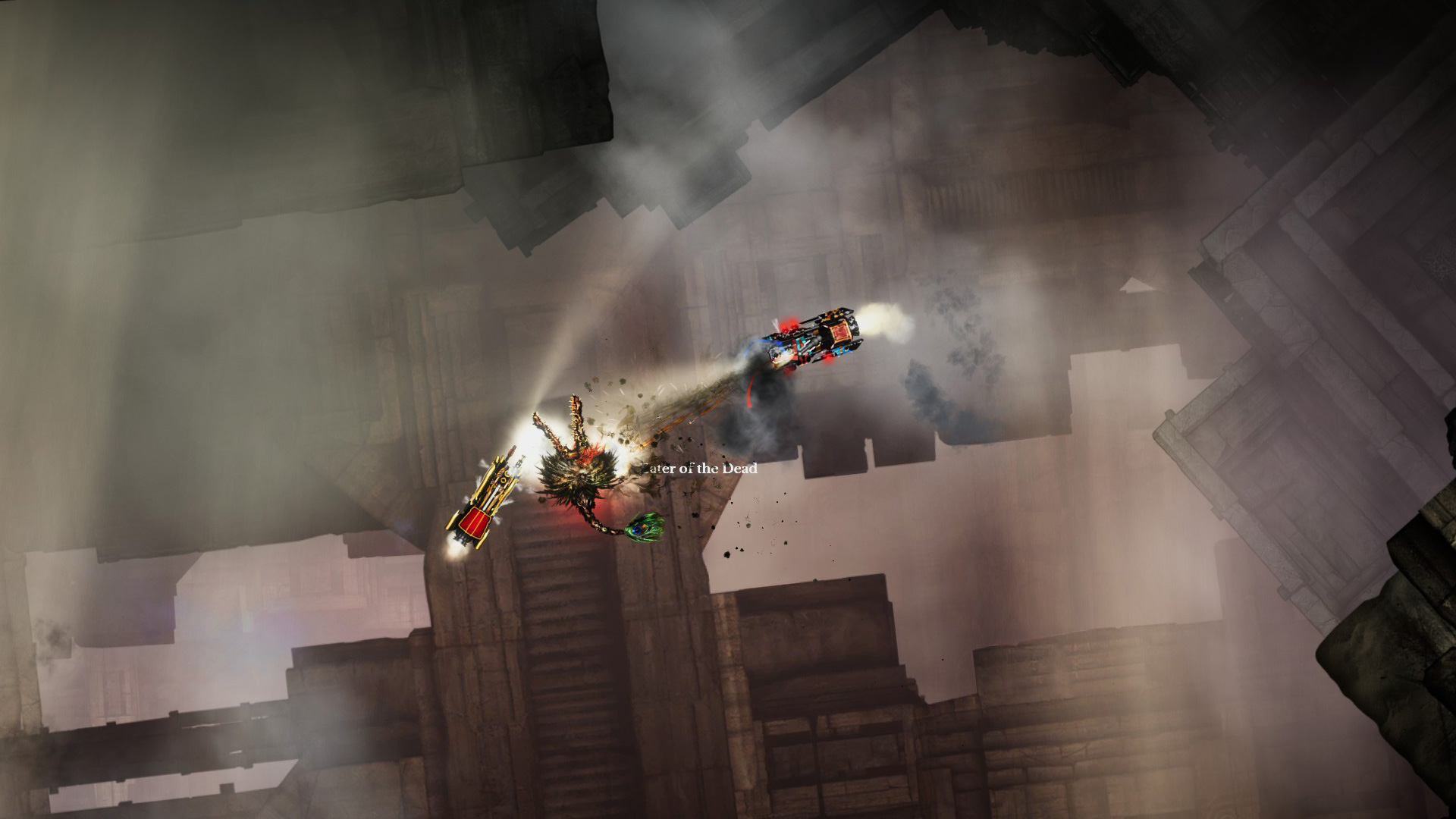 It's not exactly without challenge in merciful mode, however. Even with one of the best ships and some of the best guns for it, the snickering horrors of The Blue Kingdom claim my life often. The real-time, mouse-clicky combat is a different discipline from the rest of the game, a little too twitchy perhaps, but tense and exciting too. I feel real fear when something bursts out of the gloom towards me.

And so, for all my complaints about Sunless Skies being more Mary-Kate than Elizabeth to Sunless Sea's Ashley Olsen, I've found it very hard to step away from it. It is a place of wonderful sights and terrible people indeed, and I remain a sucker for the atmosphere of its long, slow journeys through places in equal parts beautiful and monstrous, even if the collect/deposit a box objectives can be wearisome. The soundtrack's gorgeous too; like so many other elements of Skies, it's a delicate amplification of what made Sea so distinctive.

I didn't need another Sunless Sea. Sunless Sea was doing the job just fine. I'm glad I got one, nevertheless. And if you have never before visited a Sunless place, take to the Skies immediately.

Disclosure: my fellow RPS co-founder Kieron Gillen wrote for one of the characters in Sunless Skies, but I didn't notice any of them talking about Shed Seven, so I'm not sure which one it was.