If you click on a link and make a purchase we may receive a small commission. Read our editorial policy.
Developer: Supra Games
Publisher: Supra Games

I had already decided Supraland was my favourite game of 2019 so far before I noticed it was almost entirely made by one man. If you'd asked me to guess, as I played this 20-hour vast, ingenious, hugely entertaining first-person puzzle game, I'd have said it needed to be a team of at least twenty. The art alone is a squad's job, before you get to the level design, puzzle design, the vast array of tools and tricks added to your arsenal, and the astounding level of polish. Yet when the credits scroll, one name is listed for almost the lot: David Münnich. Crikey. 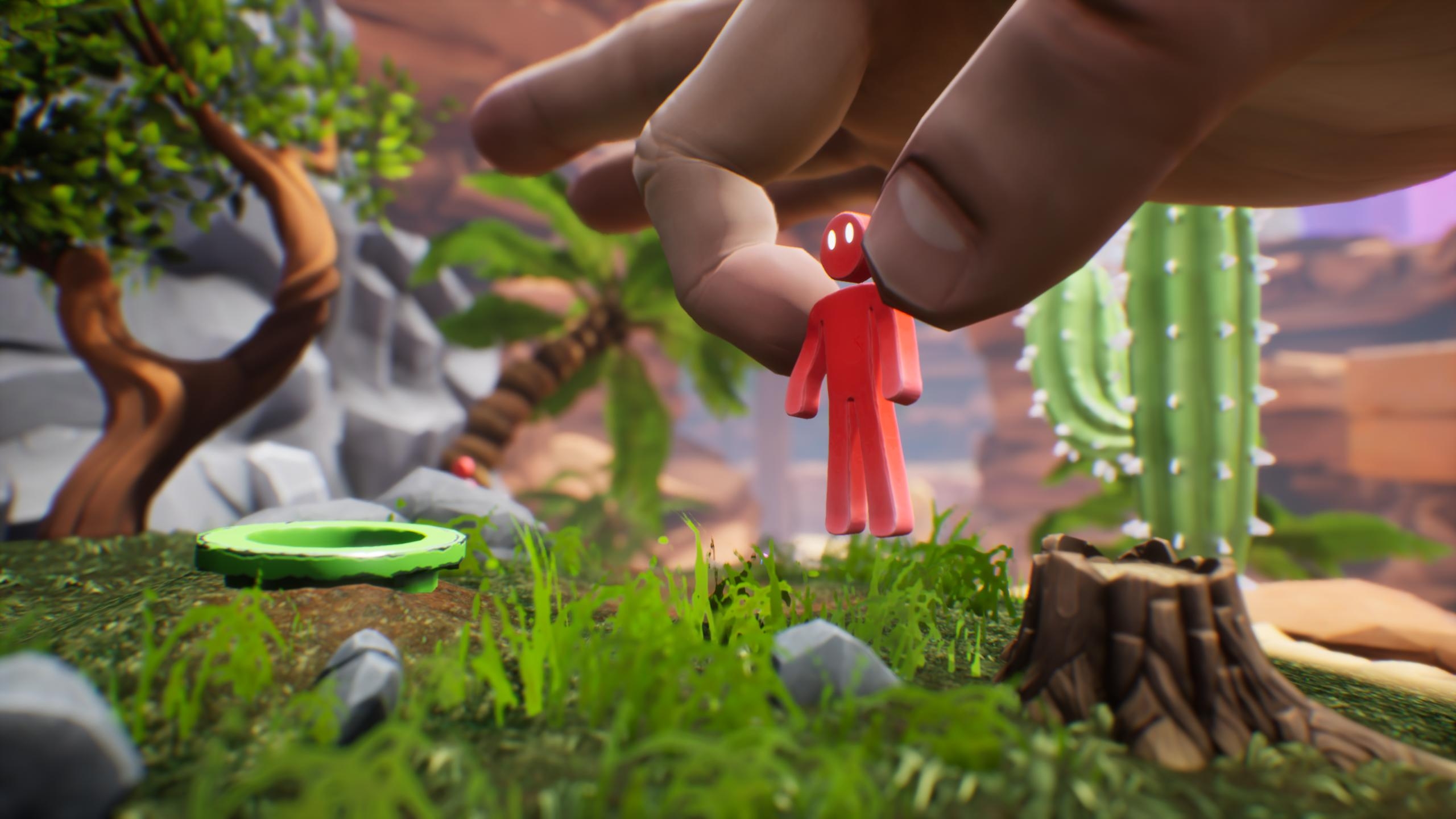 I took a look at the game on a whim, after loving the look of the screenshots. But I had a hesitation: on its Steam page it described itself as "a mix between Portal, Zelda and Metroid." Yeah, and I'm a mix between Bob Woodward, Hunter S Thompson and Joan Didion. But bloody hell if it doesn't get close to its own accolade. This is a huge, increasingly open world, packed with puzzles frequently reminiscent of Portal 2, with first-person combat, squillions of secrets, and a completely adorable world.

The premise is adorable - you are a little red plastic toy figure, living in a village of other little red plastic toy figures, in a small boy's back garden. He looms over the world, an ambivalent god-figure. Your character, the son of the King and Queen of the red people, is charged with the hefty task of travelling across the sandbox (literally) to talk to the King of the little blue plastic toy figures, about your ongoing war. Except getting across there becomes an incredibly convoluted task, involving an enormous array of locations, and an ever-growing pile of tools and equipment with which to solve puzzles, open doors, and traverse obstacles.

The first you're given is the ability to spawn a waist-high purple cube, along with, fairly quickly, increased movement speed, and a double-jump. With these you work your way through the first collection of puzzles, while becoming apparent of those not yet within your grasp. You're gently guided by the other Reds in your village, sent on a couple of quests, before being released into the enormous outside world. But before you go, you're given a wooden sword, because it's just not safe out there. 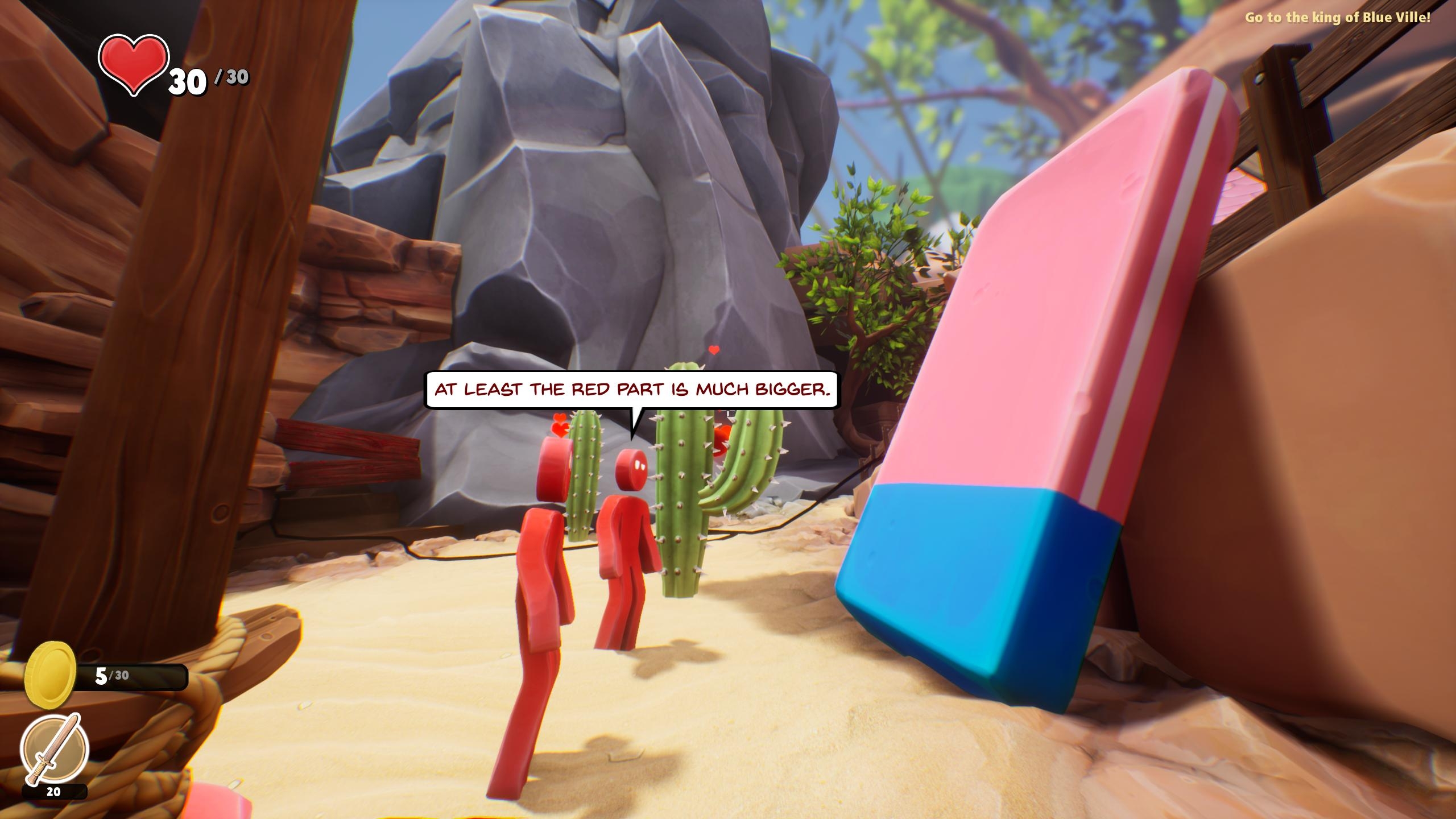 I don't want to tell you any more, really. So much of Supraland's joy is in the discovery, of working out how to combine two, or three, or four abilities you've gained to solve something new, or of thinking laterally after previous solutions can't be used. And throughout you're kindly guided by NPCs, who'll offer ambiguous thoughts, or even spring up with clues if you've been stuck in one area too long. (And I'll confess I didn't quite finish it without turning to this splendid page of hints, that rather pleasingly prompt rather than just giving the answer.)

It does what the Metroid Prime games did so well, too, of having you fly through earlier areas that were once barely-surmountable trials, on your way to fathoming the next. It's also exquisitely well gated, new areas opening up thick and fast, but without that annoying Metroidvania thing of seeing a big blue door you can't yet pass. In fact, so subtle is its execution that oftentimes you'll realise later you were happily running straight past an impassable route before you were equipped for it. Which, again, just isn't something that should be possible when one guy pretty much makes a game on his own! 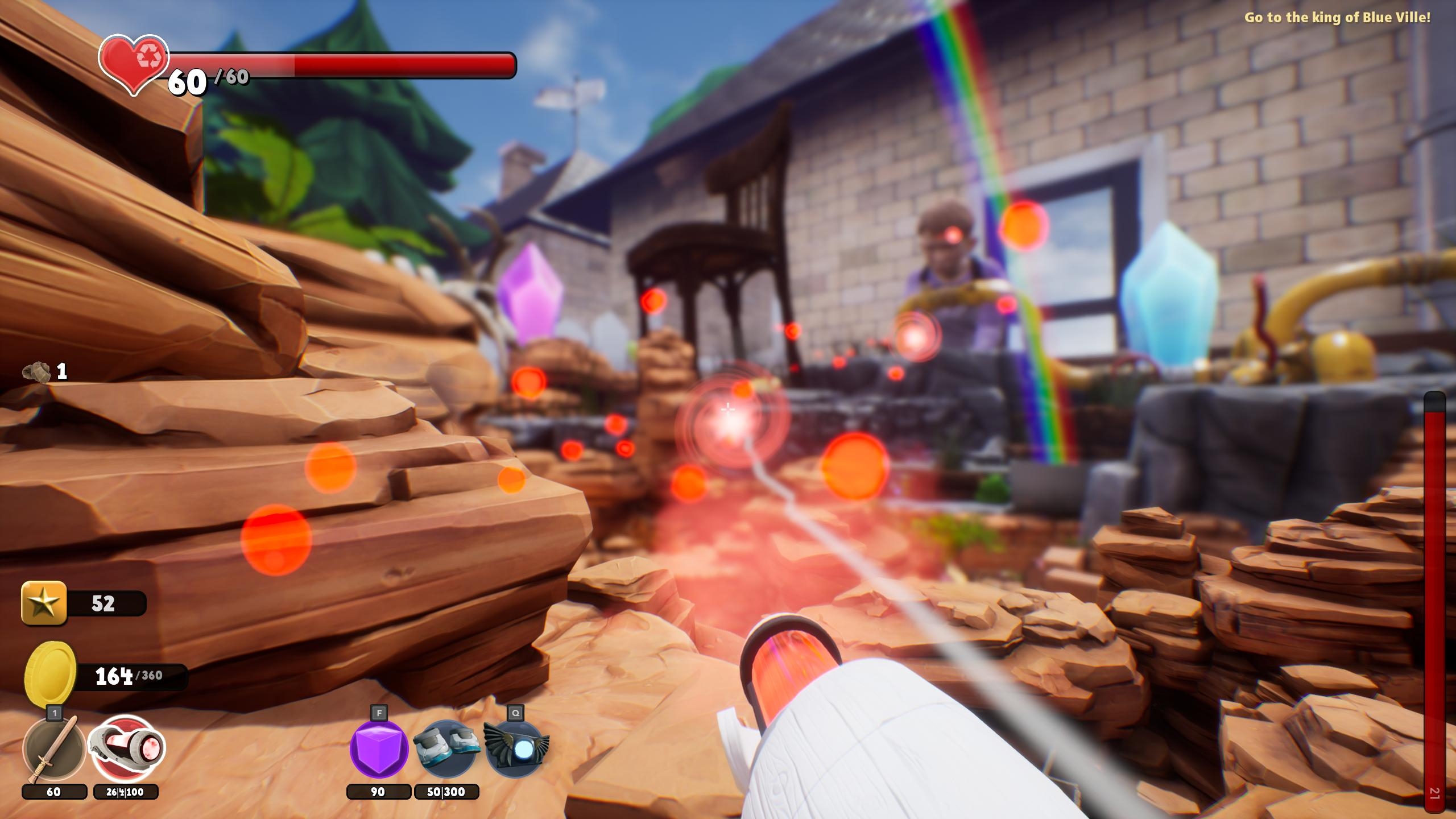 I just cannot get over how much there is here. This game is enormous, but ever-changing. I've been playing it every spare moment for over a week, and thinking about it when I'm not playing. I've been sneaking into my study for an extra hour before bed, and then finally going to bed three hours later - that's just not something I do any more since becoming a dad! I've just utterly adored this.

There is one exception. The combat is decent, an eventual combination of ranged and melee weapons, with alt-fire modes that allow combo attacks, and it's all fine. But it's all too often superfluous, and the only aspect of the game that becomes repetitive. Returning to old areas, with the intention of solving a puzzle I couldn't fathom before, or to on a hunt for secrets, might involve some pretty complex platforming escapades. Which means it's little fun to find myself attacked by fifteen demons and skellingtons from all directions when I'm in the middle of doing it. They're very easily dispatched (and the game's only boss fight leans in the right direction of using your skills over tiresome combat) but prove to be quite an irritant. They're useful, even necessary, as kills drop coins, and you'll need those for improving your skills. But gosh I wish they were more avoidable when it's just not interesting for them to be there. Oh, and one other tiny issue - the jump feels, like, two millimetres too low. It's just off. 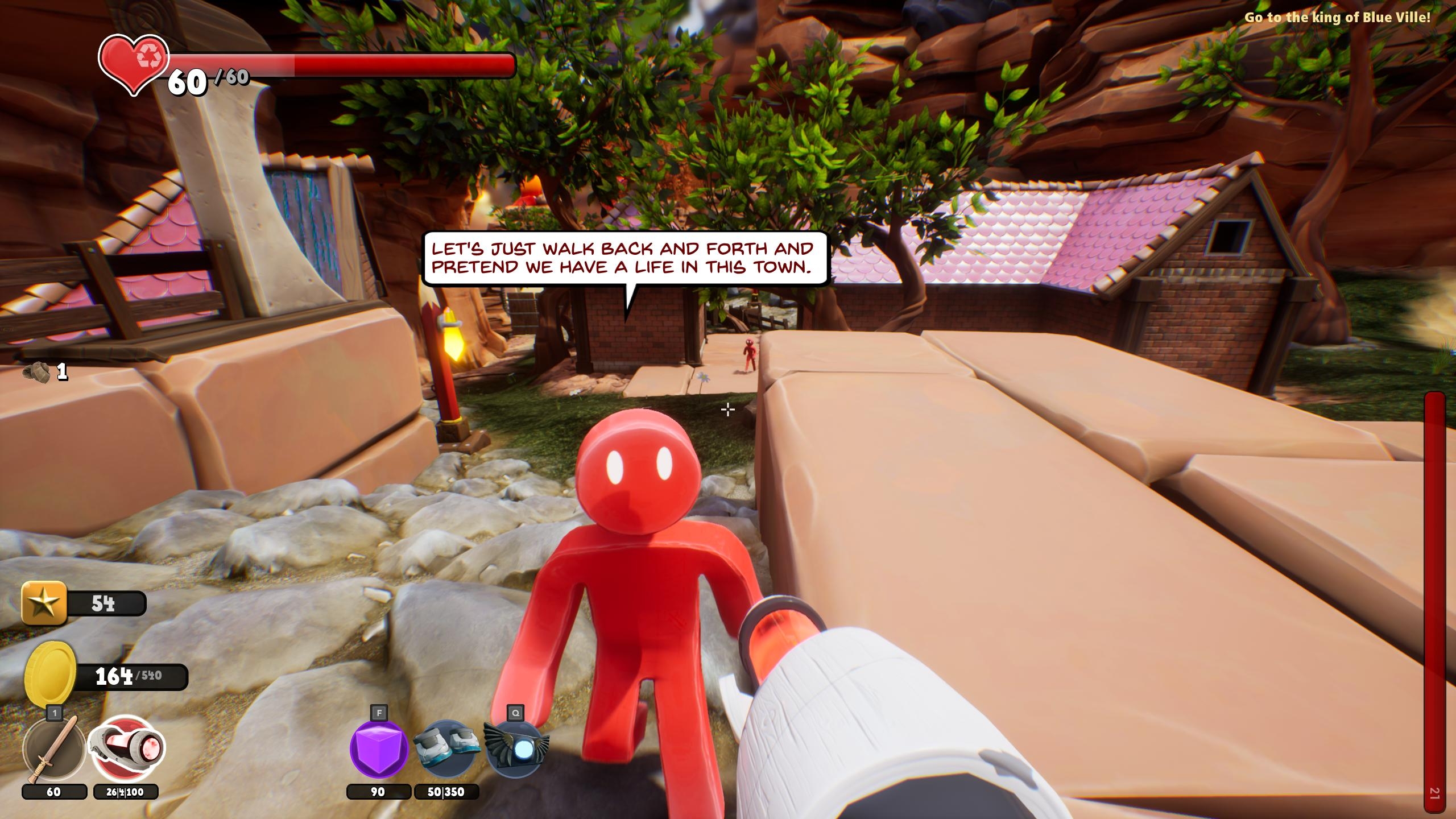 I finished the game with 67% complete, which I think is always useful information to know before you start. Lest you become terrified (as I was, this review already a week late, when I was only on 38% after playing for many days). The percentage is heavily influenced by optional collectables and hidden bonuses, and there to give you a reason to keep playing once the main story is complete. Which indeed I have.

This is just utterly magnificent. The world is phenomenally well built, all visible at any time if you can climb high enough, with the omnipresent child towering over in various places like a colossus. By the time it equipped me with so many abilities, I became sure I'd be able to 'break' the game too easily, find routes I wasn't supposed to over the cliffs, or skip walled off sections. And yet each time I thought I was about to, I'd find a hidden bonus, a "secret area" - he was always one step ahead. 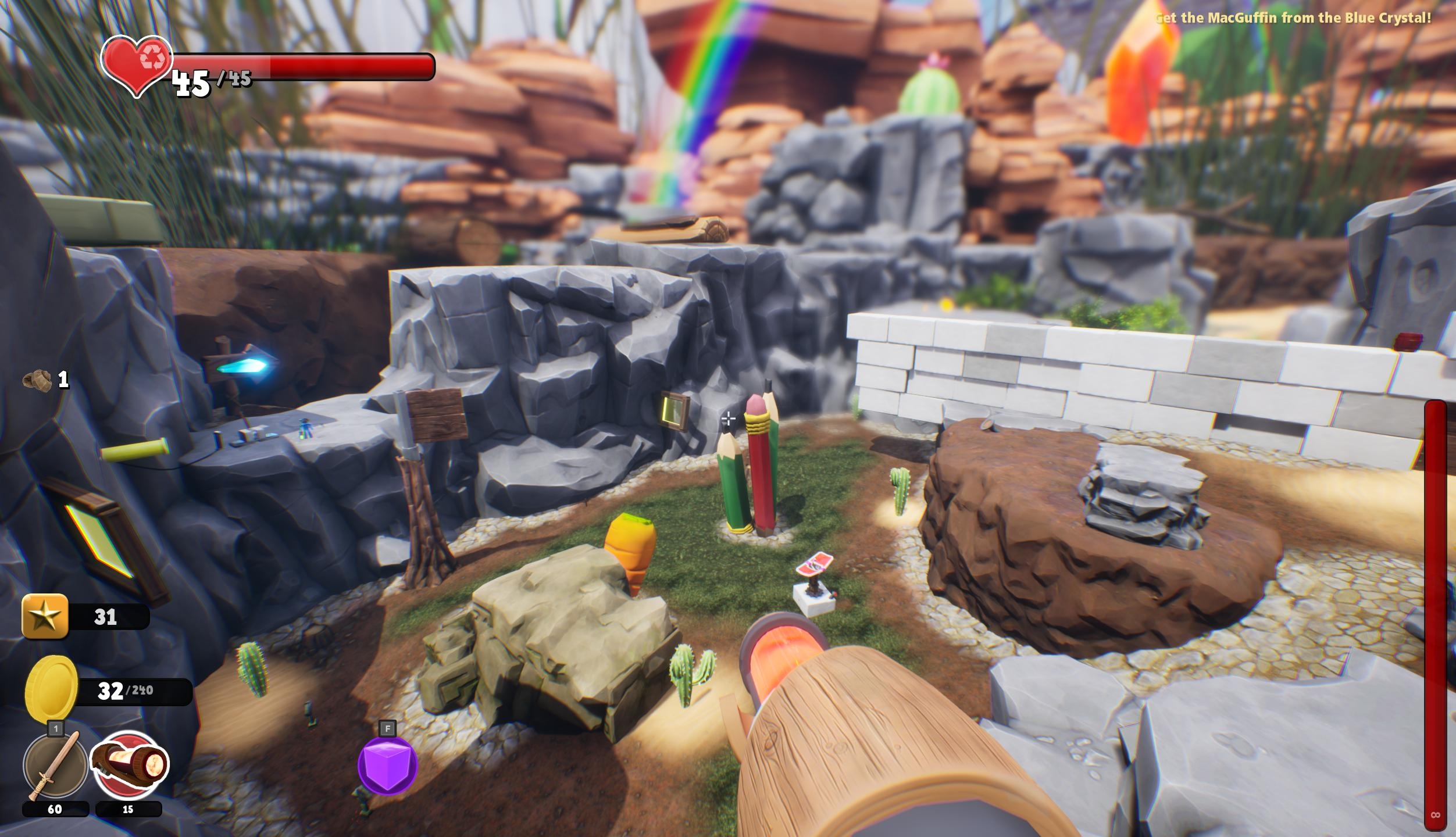 It's those sorts of smarts that makes this such an absolute joy of a game. It really does stand comparisons with Portal, Zelda and Metroid, which is no mean feat, and not words I'd offer lightly. That it's a combination of the three approaches means that, no, it never matches any for their individual supremacy, but of course it doesn't! What it does instead is offer its own individual supremacy, a witty, brilliant, and fantastically finished game, packed with simply excellent puzzles, culminating in a finale that implements and complements everything you've learned in the most wonderfully satisfying way.

It's going to take a heck of a lot for anything to beat this game to be my favourite of 2019. What a splendid treat.