If you click on a link and make a purchase we may receive a small commission. Read our editorial policy.
Crysis Remastered review
Crysis is a first-person stealth playground and a staggering spectacle, but new tech wizardry doesn't justify the new price.

Crysis was always about more than its graphics. Crysis was and is a first-person stealth playground, with destructible buildings, clever enemies, and a set of flexible superpowers with which to make one collide with the other.

Crysis Remastered is that game again, with new graphical bells and whistles you probably can't use, and a substantially higher price than the original game costs now.

I'd normally leave conversations about value to you and your wallet, but Crysis Remastered is £28 via the Epic Games store, while the original game is £18 on Steam or £15 from GOG. The original is also regularly reduced in price during Steam sales, costing as little as £2.50 in January and £4.50 in June and the beginning of September according to SteamDB. There's nothing in the Remastered edition to make me think it's worth the extra pennies.

The new edition brings better reflections, support for 4K and 8K resolutions, and something called "rippling caustics", which conjures images in my mind of beefcakes flexing their muscles while mocking me. Ideal. Less ideal: the game recommended I play on 'medium' graphics settings, with most of these options off, and Steam's most recent hardware survey suggests that around 2% of players run games at 4K resolutions.

For me, these kinds of polish jobs are aesthetically wrongheaded. Crysis looked beautiful in 2006, but that was because Crytek's art team made a series of choices designed to make the game look its best as a whole, within (or slightly beyond) the technological limitations of the time. Lifting those restrictions and selectively modifying the graphics does not work, because the whole is lost. Or, to be more specific: 8K is a very large resolution with which to view terrain which is fundamentally low-poly by modern standards.

The parts of the technical experience I care about most in a remaster like this are all quality of life issues, but Crysis Remastered falls down here, too. Load times are as slow as they ever were. Alt-tabbing out and back into the game turned the screen black, forcing me to quit and reload. I had to unplug my controller to stop it interfering when I was playing with mouse and keyboard. The game's menu mouse pointer would sometimes continue to appear during play, and at other times would drift into a corner and become lodged there so I couldn't move it to click on menu options. Even with the controller unplugged, my character would sometimes start slowly moving in-game of its own accord, edging backwards as if trying to prevent me from reaching the game's later levels.

(That was a joke about how disliked Crysis's later levels are.) 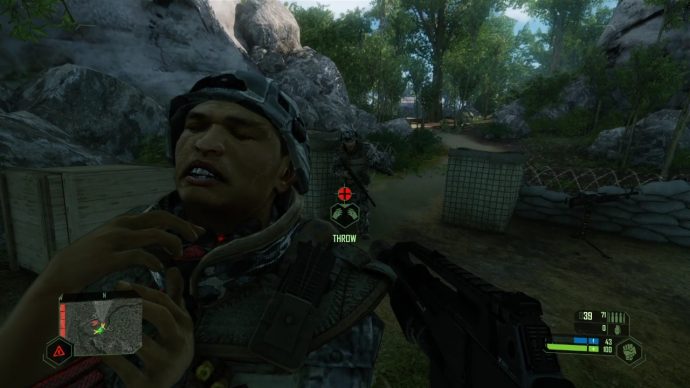 Crysis Remastered's opening sections remain the best part of the game. Set on the coast of a paradise island, you have to make your way past patrols of Korean soldiers using the four abilities of your super suit: speed, cloak, power and armor. The Remastered edition makes some changes, following the game's sequels in making those abilities available at a push of a button at any time. Hold down space and you'll do a big jump, hold down shift and you'll run really fast, and so on.

I quickly opted to return to 'classic' nanosuit style, however, in which those abilities are accessed via four discrete modes you switch between via the middle mouse button. Hit shift normally and you'll run faster but at a normal human clip. Using super speed requires you to first hold the middle mouse button and flick up to switch your suit into 'speed' mode. In speed mode, you're faster all the time, even when walking, but still need to hold down shift to reach your top speed.

This might sound like a needless complication - Crytek obviously decided so - but it feels integral to the rhythm of Crysis's action to me.

In the early game, that action takes you through a series of combat bubbles set within the tropical jungle. I've played these areas a dozen times, approaching it in different ways. I like to hide in the tall grass, my silenced rifle loaded with tranq darts, and depopulate areas one person at a time. Unlike most stealth games however, all-out guns-blazing is fun in Crysis too. I enjoy power jumping onto the roofs of tin shacks, then power punching my way through the ceiling to startle and crush the soldier inside. Or switching into speed mode and running so fast into soldiers so as to knock them off their feet, then doing it again before they can get back up. I almost feel sorry for the soldiers, as I decloak beside one, grab him by throat, and look into his terrified eyes. Then I throw him so hard into a wall that the entire building collapses.

The obvious point of reference is Far Cry - this game's spiritual predecessor - but there are points at which Crysis feels more like Metal Gear Solid V or even Dishonored. You chain together those supersuit powers to plot paths across enemy-filled villages. That's what makes the middle-mouse button wrist flicks such a compelling part of the experience for me, as I power jump over a wall, flick, and have turned invisible before I hit the ground on the other side. Or as I pop out of invisibility, drop a grenade, then flick and super speed across town before the explosion draws enemies towards the noise. Removing the discrete modes seems, for me, to also remove some necessary friction from the game's fantasy.

Doing all this felt great in 2006 and it feels great now. What has aged is the mission structure, where even those wide corridors of the early levels have you led from minimap dot to minimap dot via some truly awful mocapped cutscenes. Crysis ultimately feels too much like a stepping stone to the games that were to come, and I'd recommend you play MGSV or Far Crys 3-5 before I'd suggest a return to here.

The middle and final thirds of the game reduce this limited openness further in favour of increasing cinematic spectacle. That's why they were commonly derided at the time, but I always thought that it was a pretty good cinematic spectacle. There's a tank assault across open fields which takes place as a mountain cracks open to reveal an alien spaceship in the distance. You'll travel inside that alien spaceship to fight in zero-gravity. Afterwards, half the island will be frozen in ice, you'll drop a nuclear bomb for reasons I don't recall, and you'll fight a spaceship that blots out the sky.

You'll note I said "you'll" in that paragraph a lot. That's because, for as much as I've defended the game's later chapters over the years, I have little interest in revisiting them now. Let them remain frozen in my memory.

Around the time of the original Crysis's release, Crytek co-founder Cevat Yerli spoke about how the challenges making such a complicated game almost killed the studio, and how they'd never make another game like it. True to his word, Crysis 2 and Crysis 3 abandoned much of what made the first game interesting in favour of becoming a mediocre CoD botherer. If you can get it for £4 - and as noted above, you can during most Steam sales - Crysis is worth returning to for at least its first few hours. If you've never played it before, I reckon it'd be worth playing all the way to its end. But Crysis Remastered's spit-polished nanosuit can't redeem the game's aging design, or justify the Maximum Price.