Let’s get the important stuff out of the way first. Taur has nothing to do with bulls. I don’t know how many of you may have thought that, but I figured I’d clear it up anyway. It does have a lot to do with towers, which is how I assume the title is supposed to be pronounced. I quite admire the brass of it. It’s like calling your strategy game “Bayse” or your FPS “Guhn.”

Taur attempts to refine your typical tower defence scenario, borrowing ideas from strategy games like Total Annihilation and XCOM and reducing it down so individual matches last minutes rather than hours. It’s a spectacular and surprisingly clever little game, although sadly its best ideas are also the least successful. 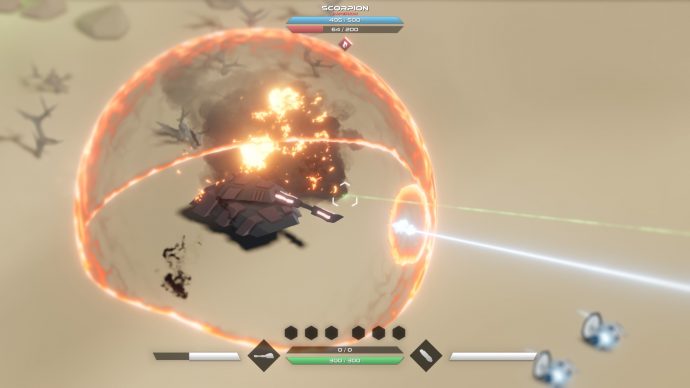 Taur’s action centres around an interstellar war between two races of alien robots. One race, the Taurans, is on the brink of being annihilated by the evil Imperion. Calculating almost certain defeat, the Taurans decide to hand over their entire strategic command to a single human, you. Lending you control of their entire military arsenal (which at the outset amounts to one big gun), you’re tasked with keeping the Imperion at bay long enough so they bring out their mothership, at which point you must destroy it.

For the first few missions (measured in-game as “days”), Taur keeps things simple. At the outset of a mission, your giant gun plants itself like a stake into the centre of the battlefield. Moments later, the Imperion’s robot hordes flood the field, although at this stage it’s more of a trickle. Aiming the gun with your mouse, all you have to do is pick them all off to win the fight. 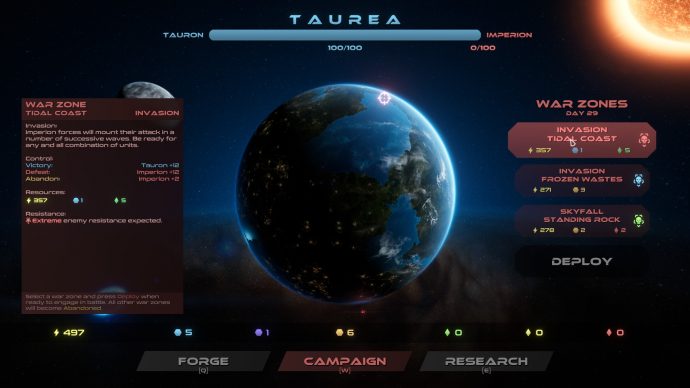 Even in its most barebones form, Taur feels satisfying to play. Your starting railgun has a fierce kick that punts enemy bots halfway across the battlefield and shreds apart environmental objects like rocks and trees. But it’s also quite slow to fire, and there’s a delay before rounds hit their target. Hence, you need to pick your targets carefully to maximise damage output.

This simple set up will carry you through the first few days, but it isn’t long before Taur twists its mechanical knife. The number of enemies increases with every battle, and the odds become overwhelming fast. With each battle you lose, the Imperion takes over a greater percentage of the planet, and if your percentage of control reaches zero, the Imperions win and you’ll be on the first FTL cruiser back to Earth. Thanks for nothing, flesh-creature. 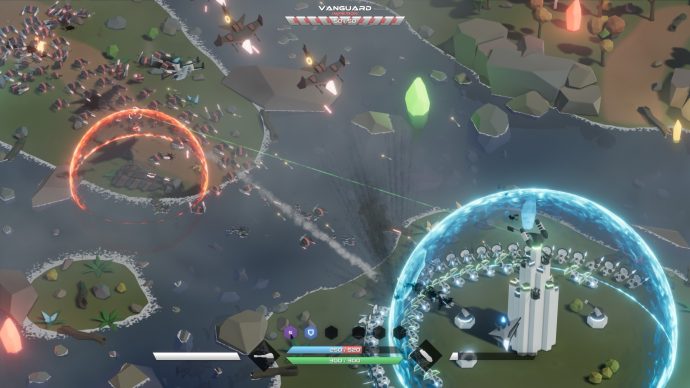 There is good news. You earn resources for each battle you fight regardless of whether you win or lose. With these, you can build sturdier defences. Pressing the space bar at any point during a battle switches the game to an overhead view, where you can erect new structures that surround your main gun. These range from automated turrets to artillery platforms and “drone-control” towers. The latter spawn a number of AI units such as robotic hoplites who encircle your tower to defend it or flying drones that provide air support in various different ways.

Any structure you build will carry over to the next battle, and if it is destroyed, the resources you used to build them are refunded to you, so that a single defeat won’t cripple your campaign. Before you can build a new structure, however, you first have to unlock it from the game’s “Research” menu by spending resources. Once you’ve done this, during battle you must unlock a relevant Hex on the strategic overview, before finally being able to build your structure on that space. 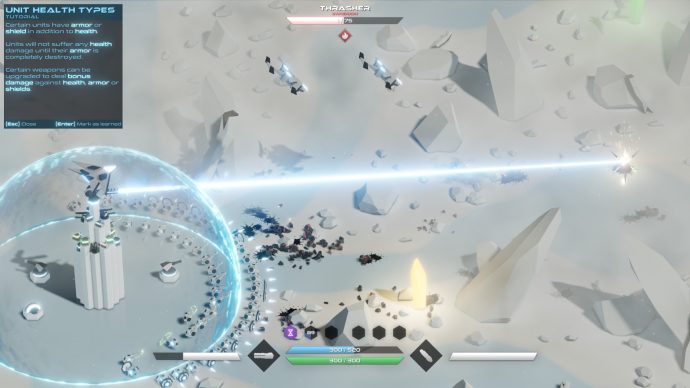 There are seven different resources types, the availability of which is randomised for each battle, so you need to think carefully about what you need to build. If you’re being battered by enemy aircraft, for example, it might be wise to invest in SAM sites or an anti-air missile attachment for your main gun. Conversely, if you’re being swarmed on the ground, upgrading your drone control towers to produce more defensive bots may be the better course of action.

Taur complicates this decision-making process in some interesting ways. Battles come in varying intensities, and there are several different types of encounter, including one that exclusively involves aircraft and another where Imperion units are dropped randomly at close-quarters. More important, though, is the “Abandon” mechanic. On most days there will be several battles on the planet, but you can only fight one of them. For those left unfought, you incur a point penalty that’ll be deducted from the points you earn through victory, (or added to the points you lose if you’re defeated.) 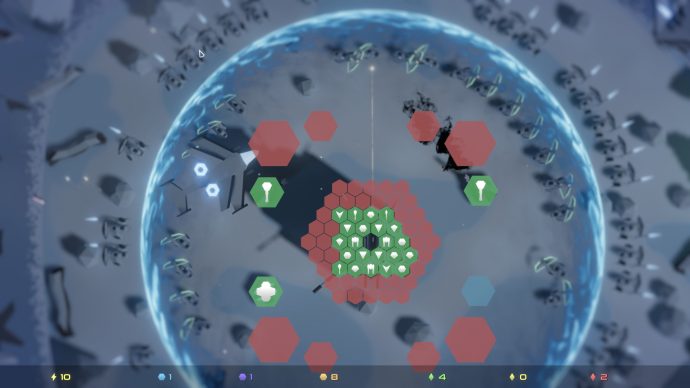 This penalty is usually small, but sometimes it isn’t, so you need to weigh up which battle is best for you to fight in the long run. Do you need to maximise your control points for this round, or are you willing to accept a slight control penalty because you need these specific resources for the ballistic missile upgrade?

It’s neat idea. Unfortunately, it doesn’t have the impact it should due to Taur’s inverse difficulty curve. Once you unlock the energy-shield generator, Taur’s challenge drops off a cliff. The energy shield makes it way too easy to defend your base, especially if you unlock the manual ability that lets you instantly recharge it. Once you’ve built up your other defences that sit behind the shield, you can pretty much sit-back and watch the sparks fly in all but the most intense of battles. 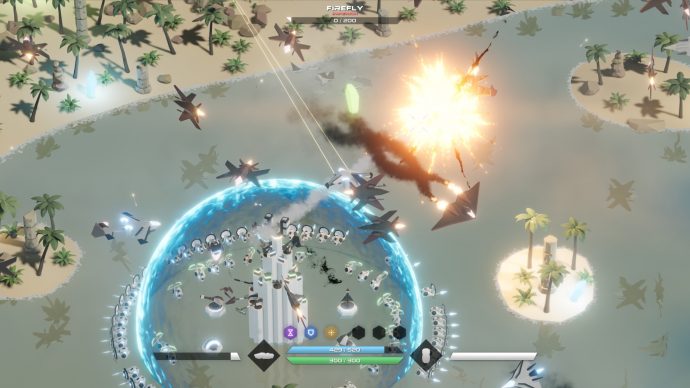 This has an appeal of its own, of course. Part of the fun with tower defence games is constructing fortifications that rip holes in your enemy’s ranks, and Taur delivers such mechanised destruction with flair. The screen is always busy with bots exchanging laser-fire, tanks bursting from artillery strikes, and aircraft trailing smoke and flame as they plummet to the ground. Better still, you’re in on this too, raking the enemy’s front ranks with your twin miniguns or dropping mortar bombs into tight clusters of units, scattering them like a flock of pigeons evading an approaching toddler.

The problem with Taur is your defences lack gradience. Generally, either your artillery and air-defences will turn the Imperion forces into mince, or the Imperion will succeed in disabling your shield generator, after which your towers will collapse like a high-street retailer. You might have a few near scrapes, losing most of your defences but managing to manually pick off those last few enemies, but there’s no opportunity for any real back and forth. In theory, you can build new towers at any point, but until late in the game you’ll spend most of your resources either unlocking new equipment or during initial set-up. 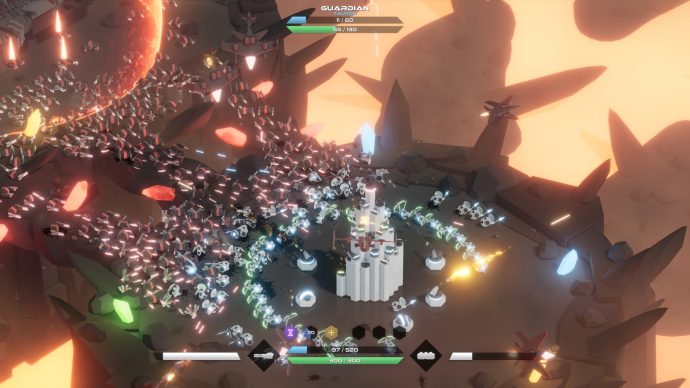 The upgrade system compensates for this to a certain extent. Unlocking a turret that freezes enemies or a War Of The Worlds-style death ray is always going to help keep you engaged. But there are problems here too. A couple of resources, such as Stellar Crystals, seem to be far less common than others. This makes it difficult to acquire some crucial upgrades, such as the larger turret stations required to defeat the mothership. It would be useful if you could perhaps convert resources at a cost. That way you aren’t entirely beholden to chance.

I’m not sure Taur has enough depth or variety to justify that £20 price tag, but it is good for picking up in half-hour bouts and knowing you can make a decent chunk of progress. Like Into the Breach, it’s easy to engage with without being mindless, although it lacks the balance and subtle ingenuity of Subset Games’ mini-masterpiece.