If you click on a link and make a purchase we may receive a small commission. Read our editorial policy.
Developer: Dragon Slumber
Publisher: Iceberg Interactive

I'm all in favour of as many A Normal Lost Phone/Orwell-like games as people can make. A fake phone or desktop, in which a story plays out via the mundane apps we are used to using every day. But, they do tend to miss more often than they hit. Tech Support really needs some.

Tech Support: Error Unknown creates a super-simple, if frustratingly low-res, desktop. You've email, a very limited browser, an app for your bank, and a music player. And, of course, the tech support program that lets you answer people's queries from the remote working comfort of your own home.

You are that person at the other end of the text chat support line, who replies in incongruously applied stock sentences to Quasar customers' mobile phone tech queries. You're quickly introduced to the concept with a short tutorial with your boss, and then you're helping people out by suggesting they switch it off and on again like a champ. With each successful interaction, you earn money directly into your bank account. The further you progress, the more responsibilities you gain, the more there is to do, windows to juggle, apps involved, all while the story of corporate espionage, potential terrorism, and police investigations begins to unfold. 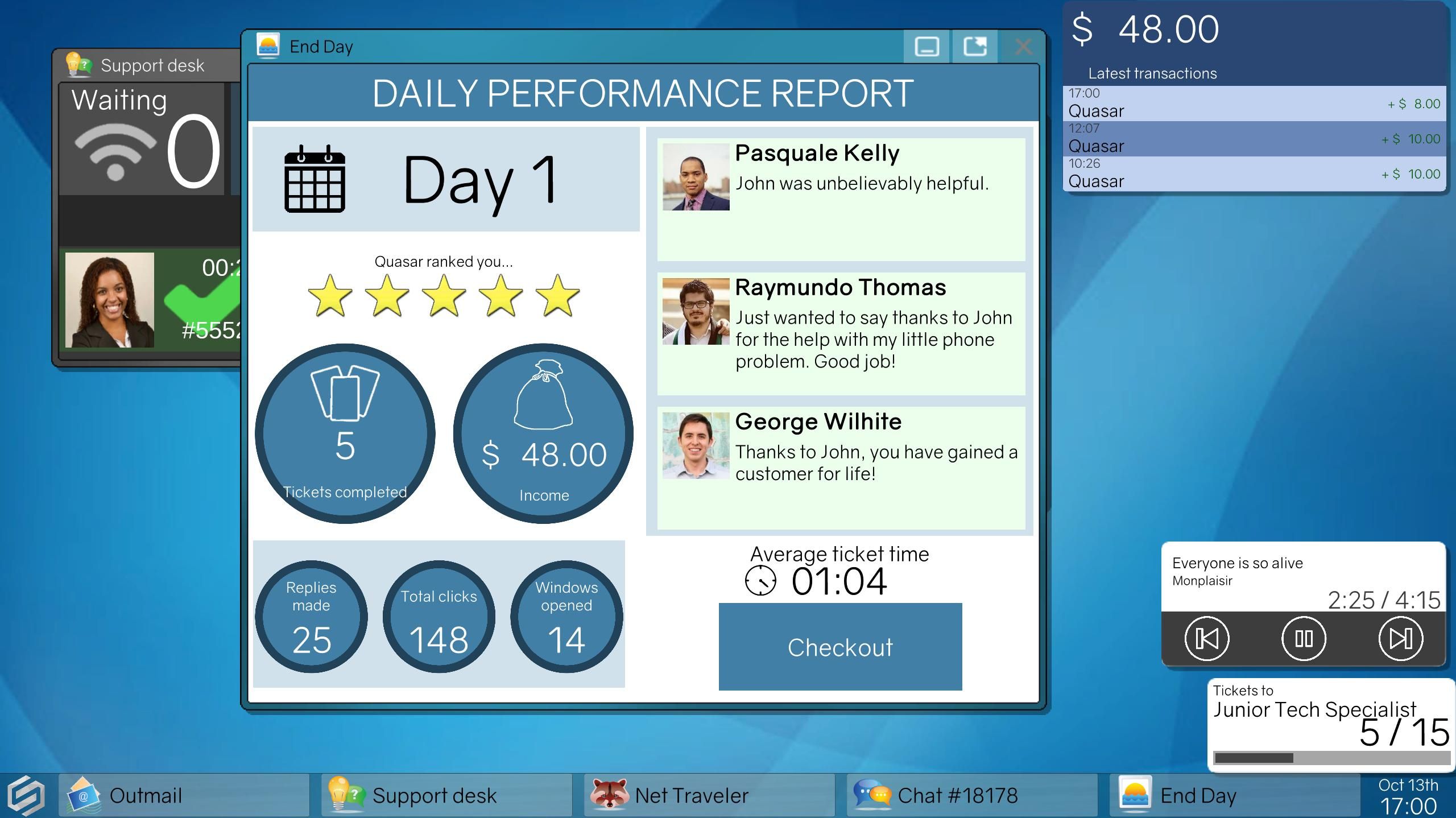 At its best, Tech Support has you juggling all these elements, while making moral and ethical decisions, trying to work out if you're working for or against the baddies, or perhaps both, all while trying to answer customers' tech queries as efficiently as possible. In these moments, it flows, you can see what the game was aiming to be. But yeah, aiming to be.

Because sadly, despite an awful lot going on here that's interesting, the issues with the core concept become apparent far too quickly. From the beginning, the very few screens of explanatory text in the Quasar workers' online wiki are riddled with typos and spelling mistakes, which doesn't exactly suggest a professional endeavour. The design also looks clumsy, the windows on the desktop all oversized and fiddly. I could get past that. But I couldn't get past just how broken it appears to be.

Almost straight away, issues with the game itself, rather than the fictional software, appeared. Open tickets refused to close, despite declaring themselves complete, all listed as "ongoing". On Day 3 I was able to take one support chat in the given time, yet on my Daily Performance Report it said I'd completed three, with an average ticket time of "None". Oh dear. One of the other chats was a tech guy from Quasar offering me some software I could buy from him in a frenetic series of messages that made little sense. The other, and making this all the weirder, was the invasion of a chat from my brother, one "Colten Walker", who had somehow gotten through to me to tell me our mother is very sick. 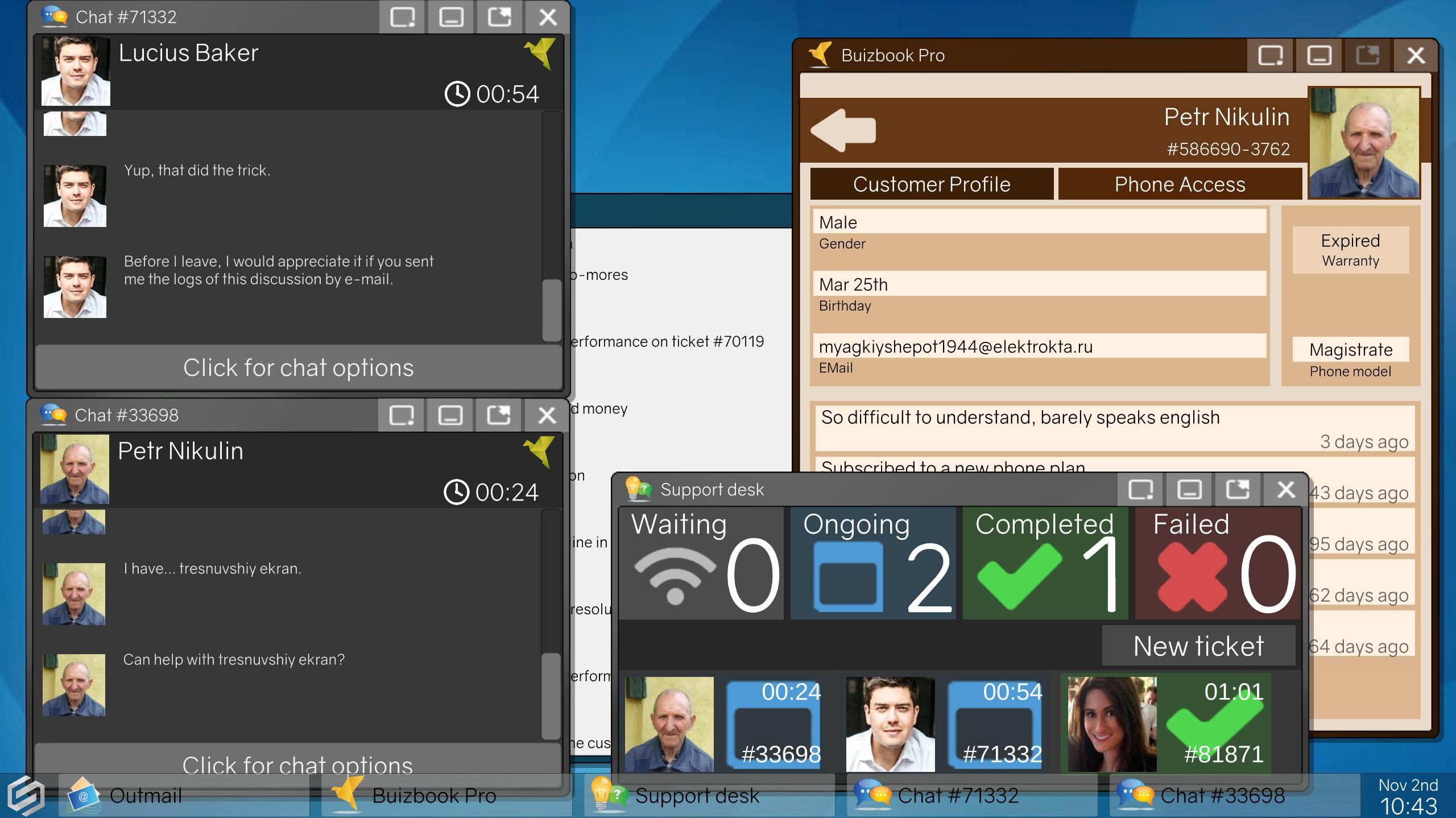 But in this game you're only able to reply with stock phrases, chosen from a menu, the most generic available responses being "Yes" and "No". Colten didn't ask me yes or no questions, but instead demanded to know why I hadn't answered his calls or emails (which the game hadn't featured) about our ailing mum. I entertained myself by asking if he'd turned her off and on again, and when he complained about being tired I suggested he change his battery. The game did not pick up on my extraordinary wit. Although when I enquired if he had a warranty, the game accidentally slipped into standard responses and my panicked brother calmly informed me that he had one, but only the standard version.

What I was supposed to do, it seems, is juggle the "Problem" and "How did it happen" text choices at random until he eventually asks me for money. Oh. Anyway, I got rated five stars for that day's work, so it was going well!

Except, um, no. I got fired. I wasn't told why, just my boss Kamala telling me that she was disappointed with me, and then adding, "Your resume was really promising, but we can't keep someone who doesn't adhere to our quality standards on payroll." Presumably she means she can't keep someone on payroll who doesn't adhere to quality standards, but that aside, what? What did I DO?! I repeated that third day, answered one extra ticket, got graded only 4/5 stars this time, and then wasn't fired. 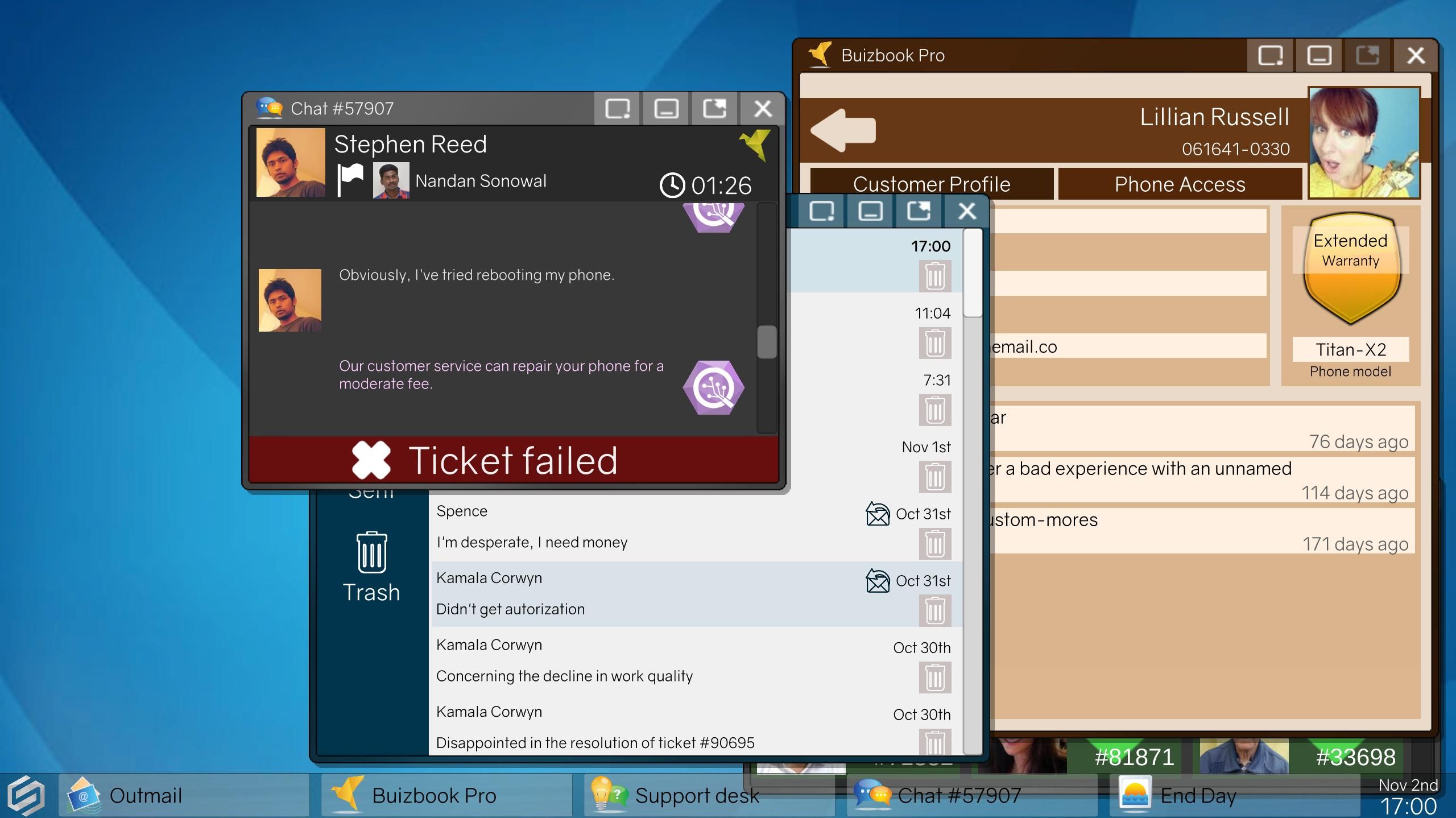 It is, unfortunately, constantly this weird. I had a customer call me a barrage of insults, tell me I was stupid and useless at my job, and then leave a review that reads, "I've have never received this kind of committed technical support, and I'm amazed. Thank you, bless you." Another customer left a positive review after telling me to "die in a fire" and hanging up.

Early on, Kamala sent me an email about warranties, in which she made it explicitly clear that any customer with an "extended warranty" should always have their issue escalated up the chain if I couldn't immediately resolve it. When doing so, I received an email from her admonishing me, explaining that, "because she had an extended warranty, a better solution would be that we can't help her." What? This is just gibberish. And sadly not unique. Later the game adds VIP customers, who you are strictly instructed must have every wish met. I offered to repair a cracked screen for free for one such client, and was told I'd failed the ticket. Kamala emailed to say, "Because she had a vip (sic) account in working order, you should have suggested that we can't help her." Sigh. 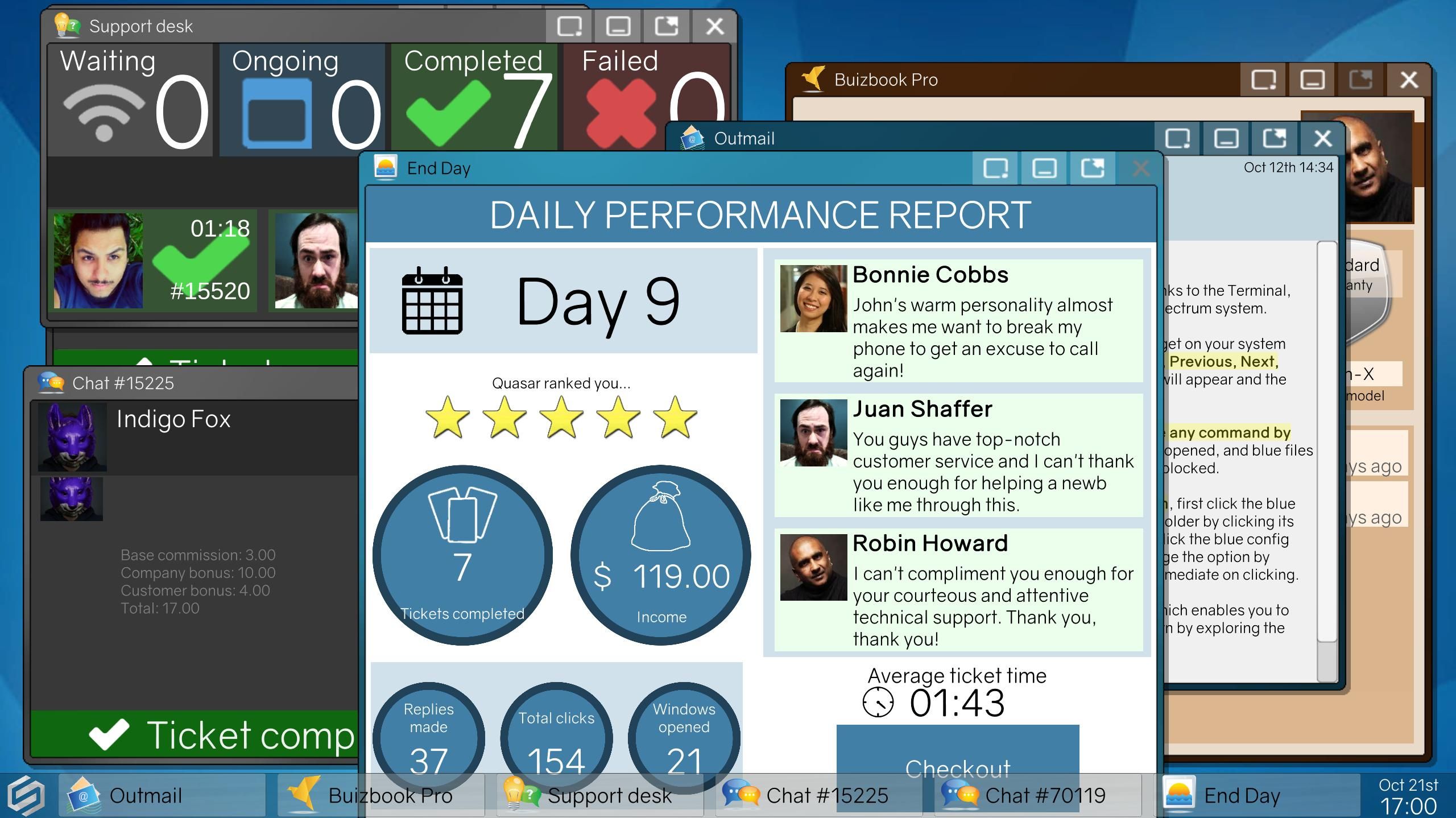 Where these issues took a real turn for the ugly comes with the sick mum story, however. I was asked by my in-game brother to send him $1000 to pay for vital tests to keep her alive. I worked fast to earn that money, but the game never gave me the ability to send it. It should have appeared on the bank web page, but it just wasn't there. There was no way to pay it. A few 'days' later I received an email that reads. "Mom just died. Don't bother coming to the funeral." Yeah, actually that's not cool.

It just continues to fall apart. On Day 20 it's still introducing new features, which is great, but it's also forgetting most of its own plotlines. A colleague asked for financial help in desperation, I gave it to him, and nothing happened, no response, no further details. Another organisation that asked me to upload some documents to customer phones over the next three days never replied after that time. So instead, I'm just left battling against the bugs and idiosyncrasies, rather than the game itself.

By Day 21 seemingly nothing else was happening. It added antivirus software to upsell, but no new plot, no developments, no reactions to anything I was doing. And I realised at this point that all I was doing was imaginary tech support. Out of morbid curiosity I carried on until Day 27, and not a single thing happened. Which marked my point of being done with this. 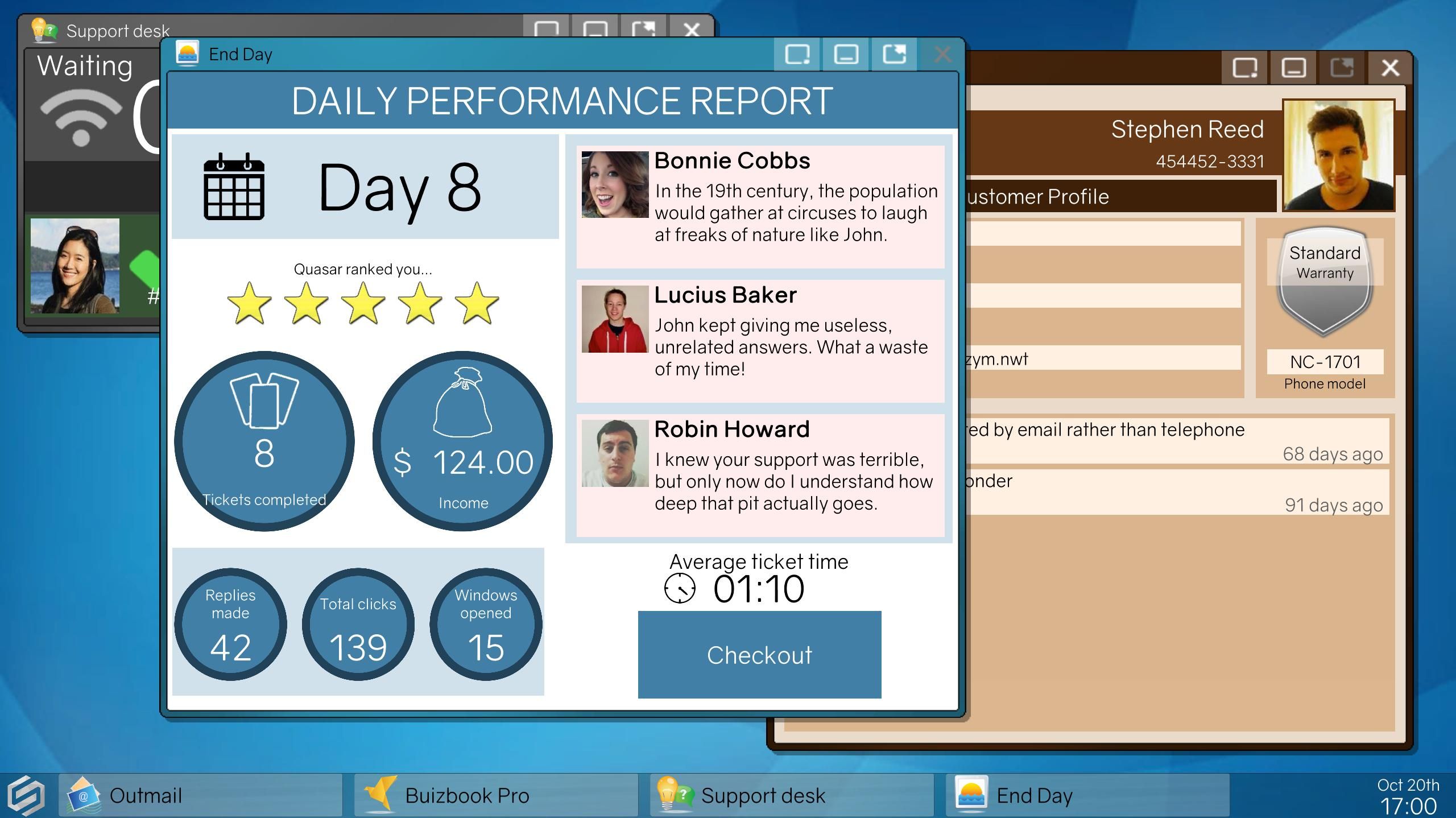 It clearly needs a whole lot more work, with so many issues, from contradictory instructions to entirely abandoned plots. But even then, I think it needs a serious rethink about how it tries to combine the rushing-you-along mechanics borrowed from something like Papers Please, with the unfolding mystery narrative of A Normal Lost Phone. Here the mechanics and mystery are not entirely compatible, and since failing to keep up with the former causes instant game overs, it means you're forced to rush through the latter.

There's definitely a nice idea in playing as a tech support trapped behind deploying stock phrases, as some larger story unfolds about you, but Tech Support: Error Unknown just doesn't deliver it.