Everyone's favourite Pokémon-like MMO is getting some brand new additions this year, including 50 new Temtem and two new islands to catch them on. Temtem developers, Crema, have released a short-term roadmap talking about some highly-requested new features coming to the game's competitive scene, as well as a few other bits like player housing. Soon there'll be an infinite plot of land where everyone can build a home for their Tem-friends!

As you can see from the roadmap below, the stuff Crema want to introduce this spring includes some new social features, ranked matchmaking and a spectator mode. In summer and autumn there are plans for two new islands, 50 new Temtem (Temtems? Is Temtem singular and plural? Like sheep?), player housing and a quest diary, so all those pesky quests have somewhere to organise themselves. 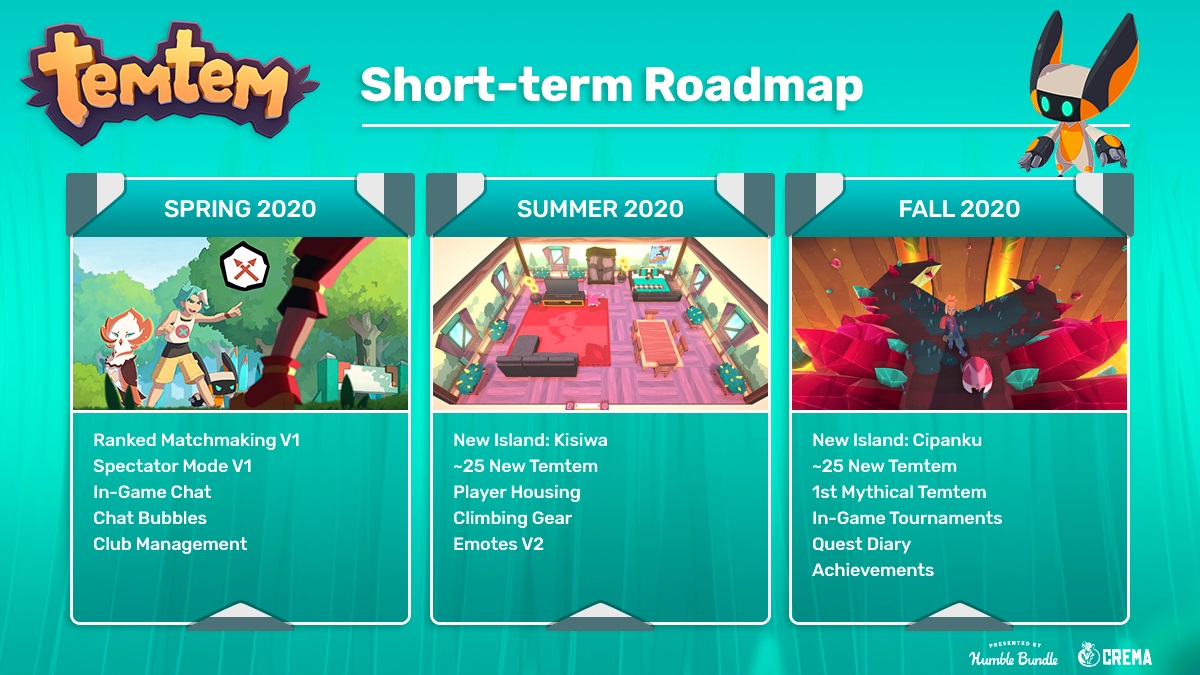 For all you competitive Temtem Tamers, the developers are introducing auto-scaling into ranked matches.

"Auto-scaling will essentially perfect your Tems, upping all their SVs up to 50 for the battle and their level to the current level cap (currently 48). With auto-scaling, players will still need to capture and organise their teams, set their preferred TV spread using fruits or training, obtain the necessary gears completing the main or side quests in the game and breeding for their desired egg techniques. But, players won't need to grind for perfect SVs or spend a fortune breeding to reach that point."

Crema addressed the game's balancing too, saying they don't plan on perfecting everything until the Temtem roster is complete. For now they're just focusing on dealing with anything too overpowered that might break the current meta.

They note that not everything mentioned in the short-term roadmap will definitely be making its way to the game, because "ideas change constantly and stuff we like today we might not like as much tomorrow". The dates they've given for all this stuff aren't hard-set either, to avoid pressuring the team into working to a strict deadline.

"We know everyone else likes dates though," they said "so we've decided to include open dates for each block of features. Take them with a grain of salt and expect delays and features moved around dates."

You can check out Temtem's short-term roadmap over on Crema's website, and keep your eyes peeled for more details on the mid-term one that should be releasing today.

Before those 50 new Temtem get added, take a look at Dave's Saipark Temtem list to make sure you've caught the 80 already waiting for you.