Today is the first day of EGX, the London games show run by our corporate siblings. Most of the RPS gang have absconded to the Big Smoke to play games, host sessions, and loiter in pubs, but they'll be letting we remaining skeleton crew live vicariously by sending missives about their Rezzed. Which I will post here. So we can pretend we're there. And not at home, writing. You can watch RPS sessions streamed live, the vid buds are streaming too, and Alice L will be sharing snaps on Instagram too. But now, oh god, I've a text coming in.

The look of despair on Matthew's face tells me he would not be a good bomb defusal expert. 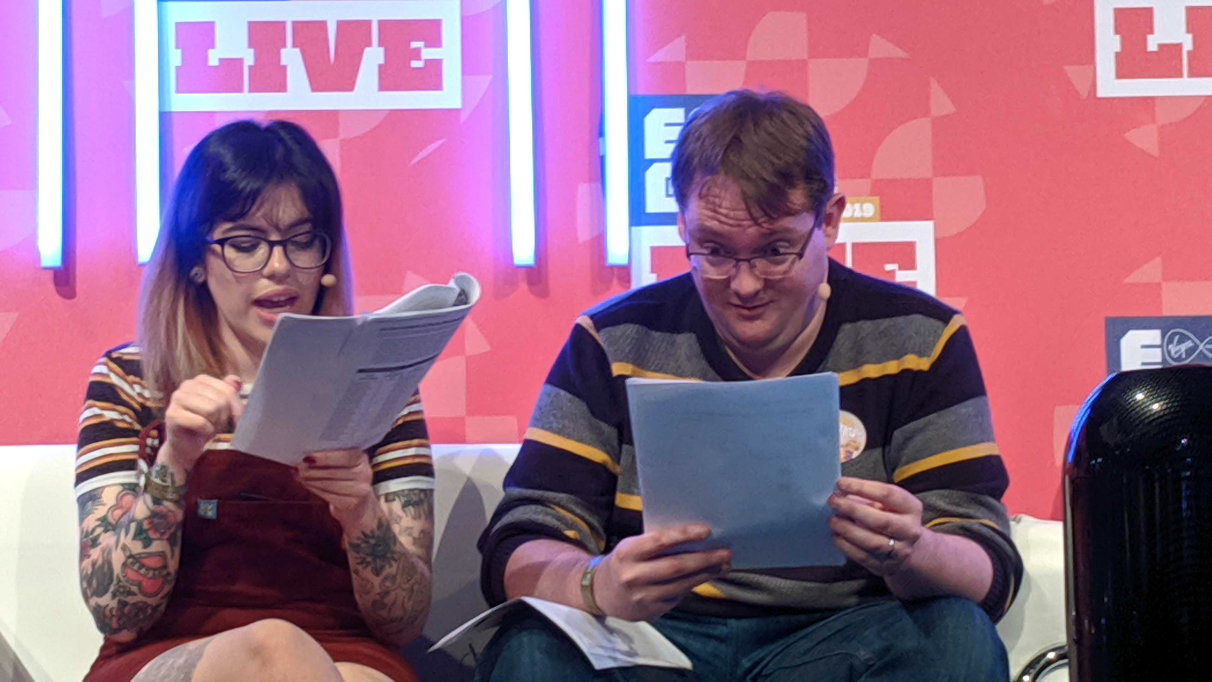 Vidbuds about to go live with Keep Talking And Nobody Explodes. Katharine and I are excited and in the front row 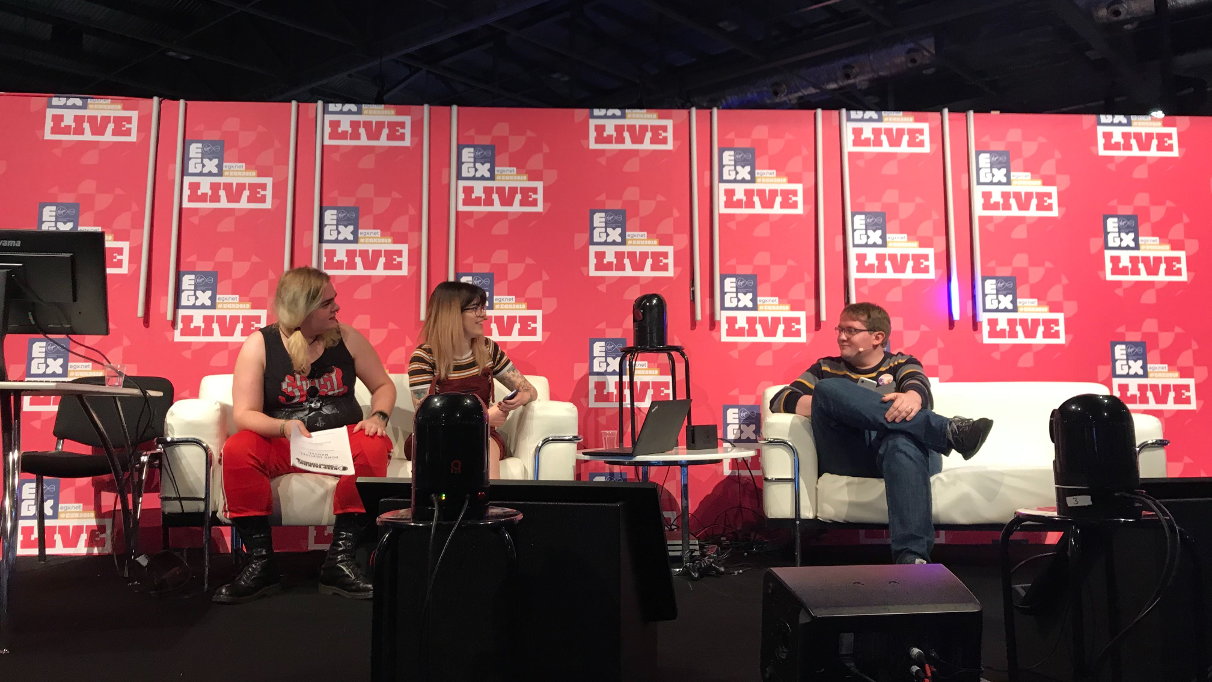 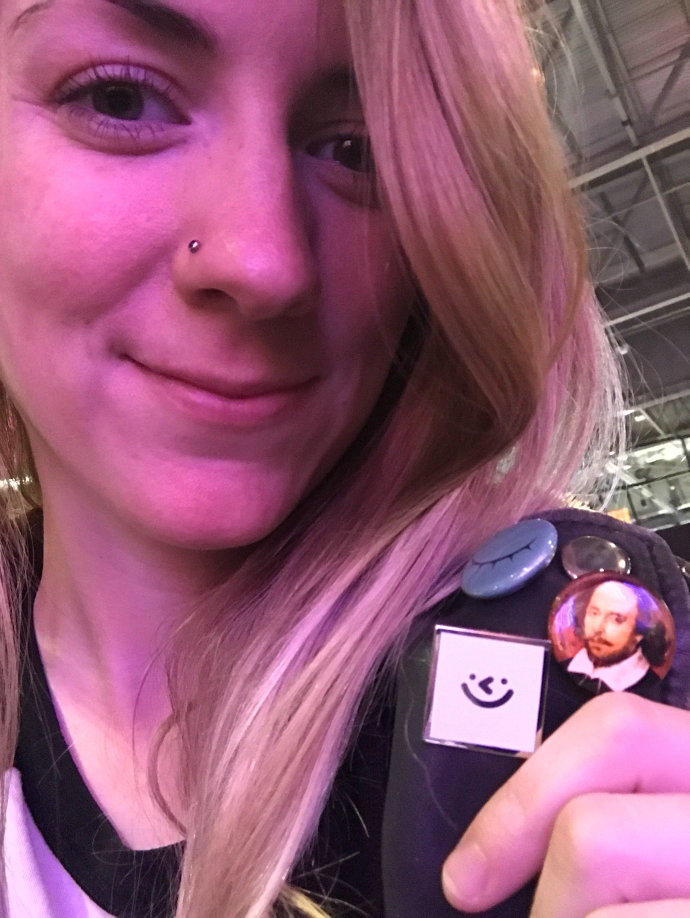 Alice B can't stop talking to the creators of Wilmot's Warehouse. 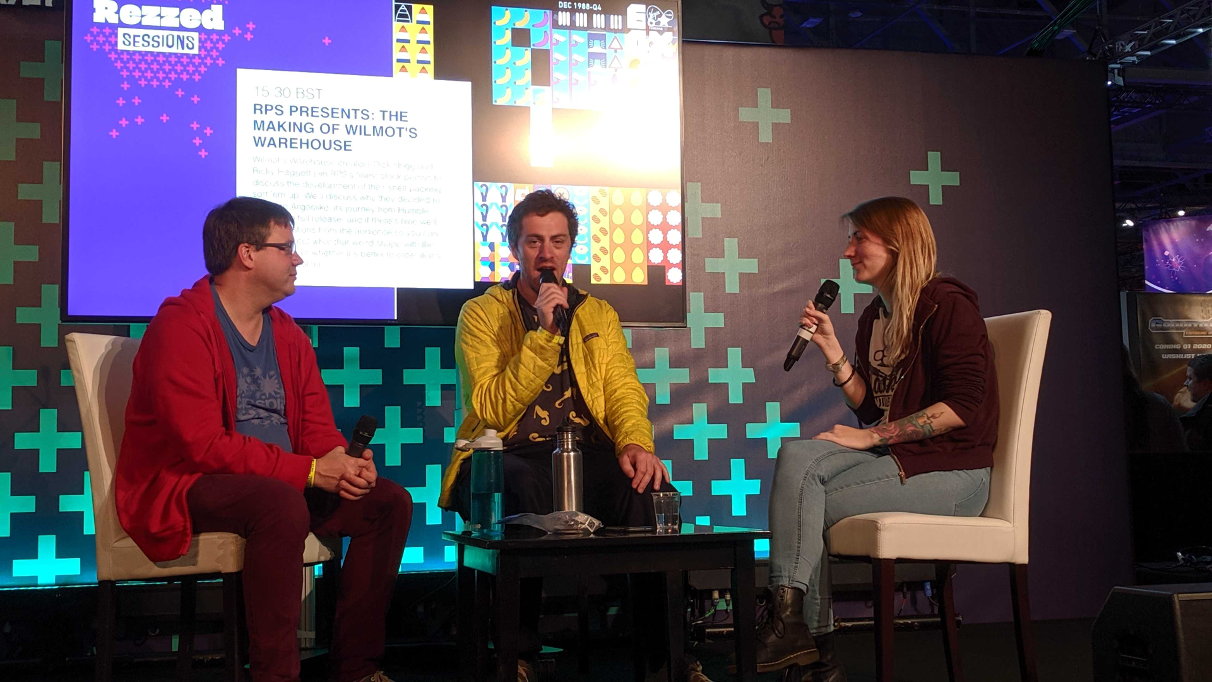 Trying to write features. Ghoastus has cracked open an amphora of something vile. Stinks in here. Anyone played any good games yet.

I arrange this stage and people showed up. Even me! Miracles all over. 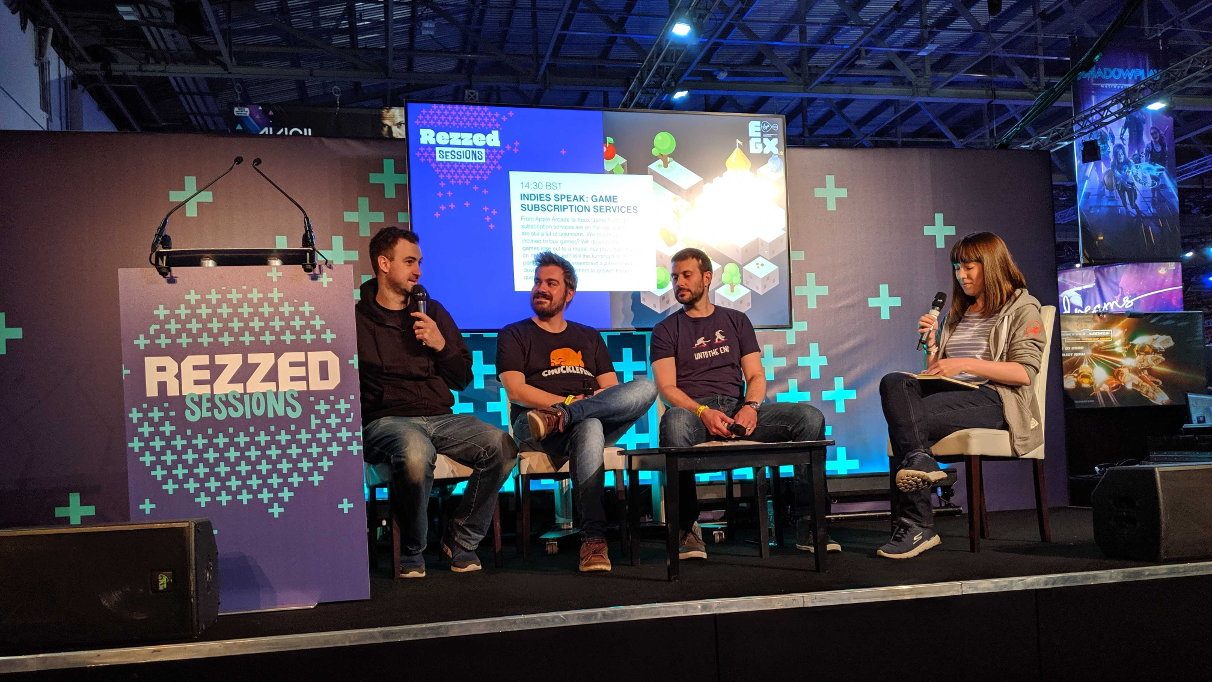 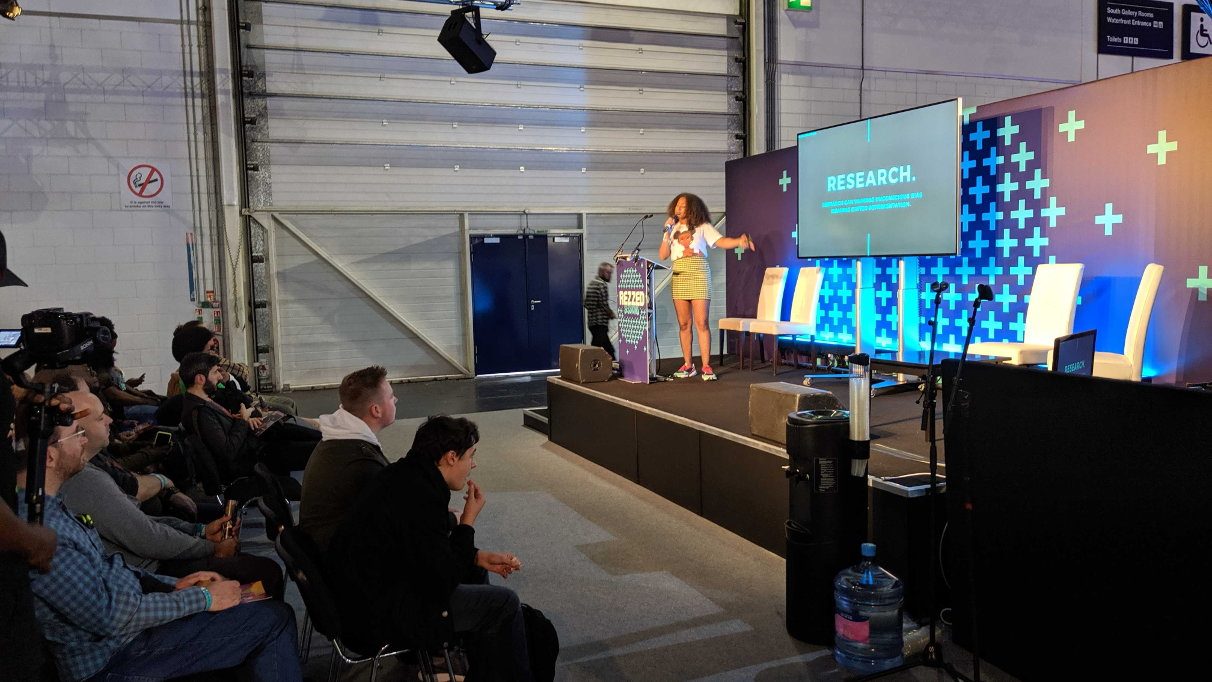 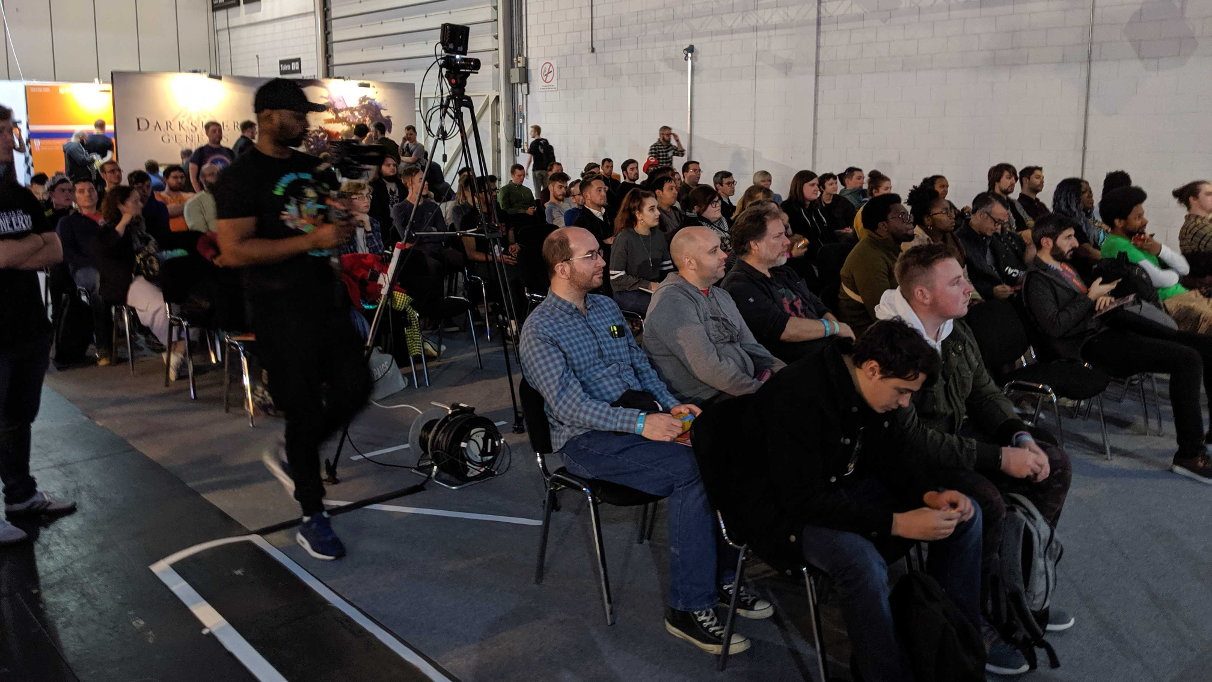 We got sweets! And I got a sticker. We have fans!
Astrid got a mixtape too. 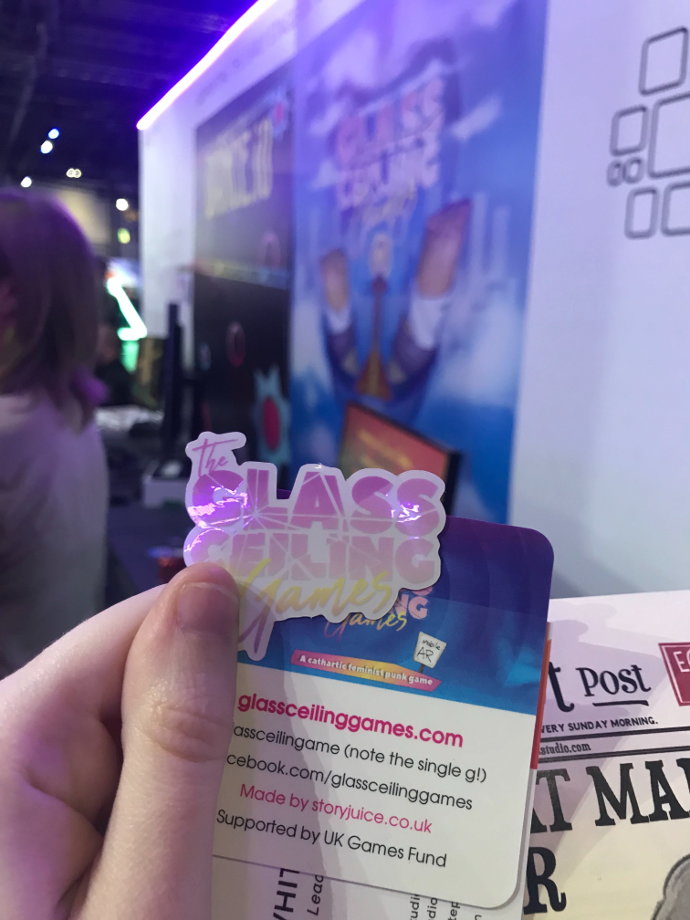 Seemed a bit low hanging fruit, given the context of a video game expo

I have found a Castle and hunkered down next to her, like a dastardly king. I assume that when the whole team comes together we will automatically conquer EGX, but the rules are unclear.
Vidbuds are playing a game. Scandalous. Trine 4 looks lovely, and better at using all three characters. So far there have been seven deaths, slightly above the average monthly rate in the RPS treehouse.

This is the face of Tony Slopes. He's seen too much. 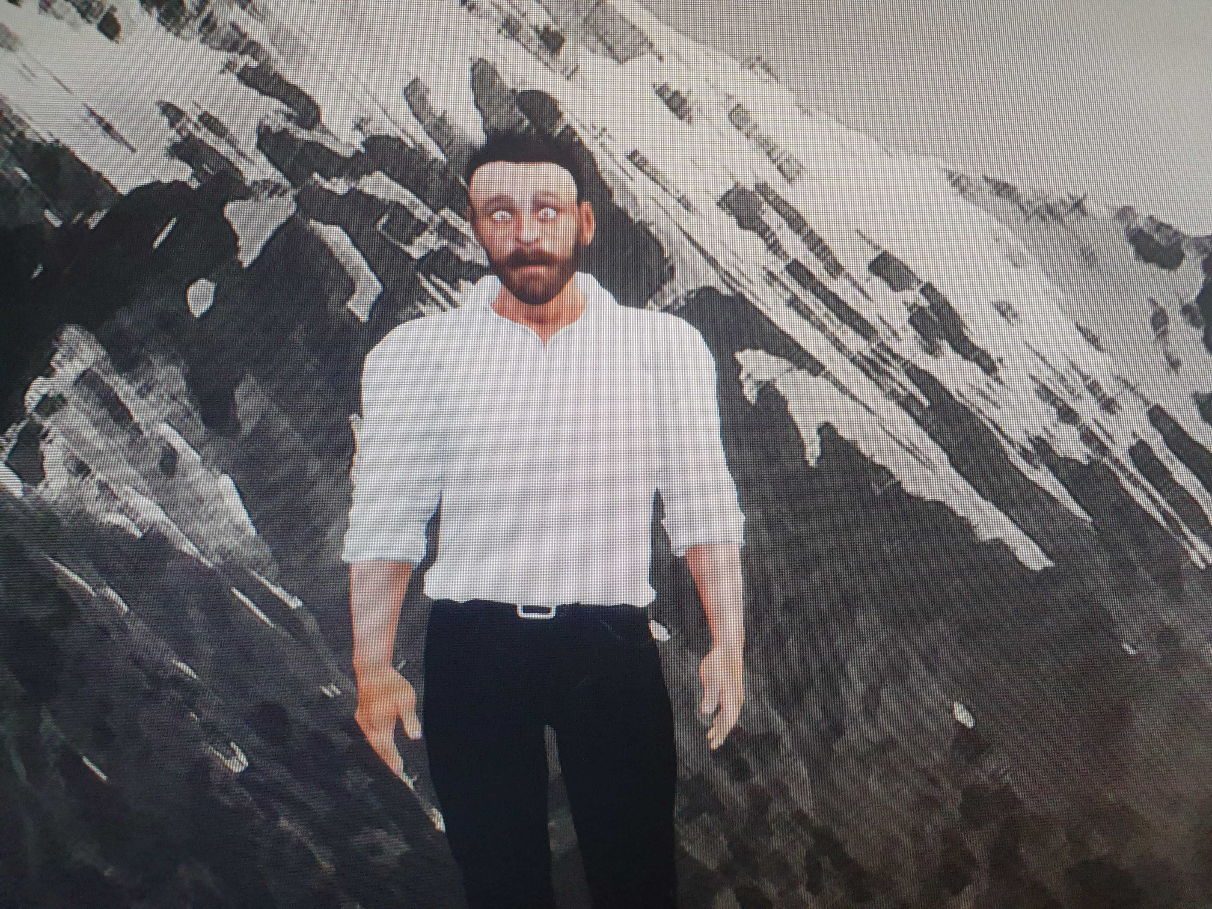 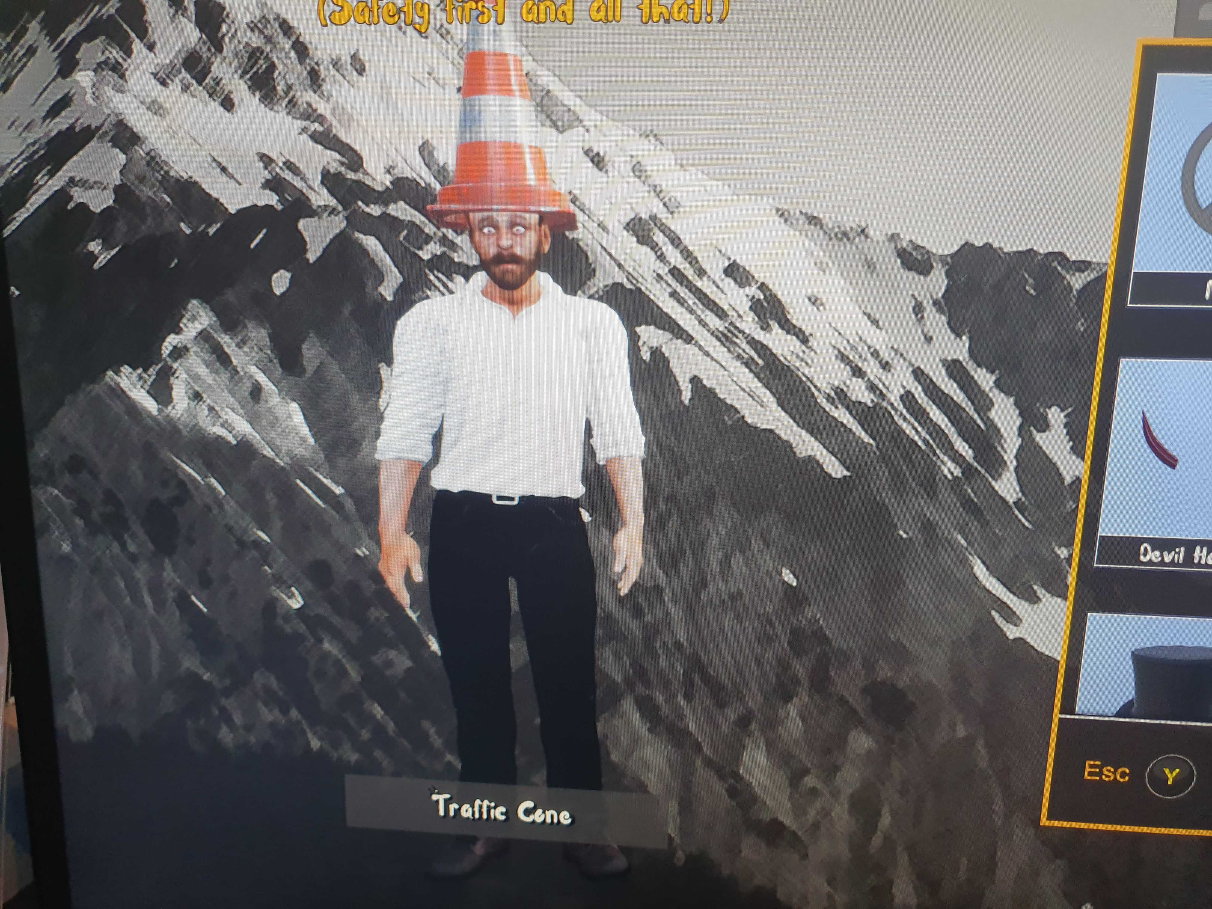 Hours later he got into a bet. He could have a steed, but only if he won a race. Climbed the nearest mountain he could find. In his drunken haze, he figured a humpback whale was the only viable option. 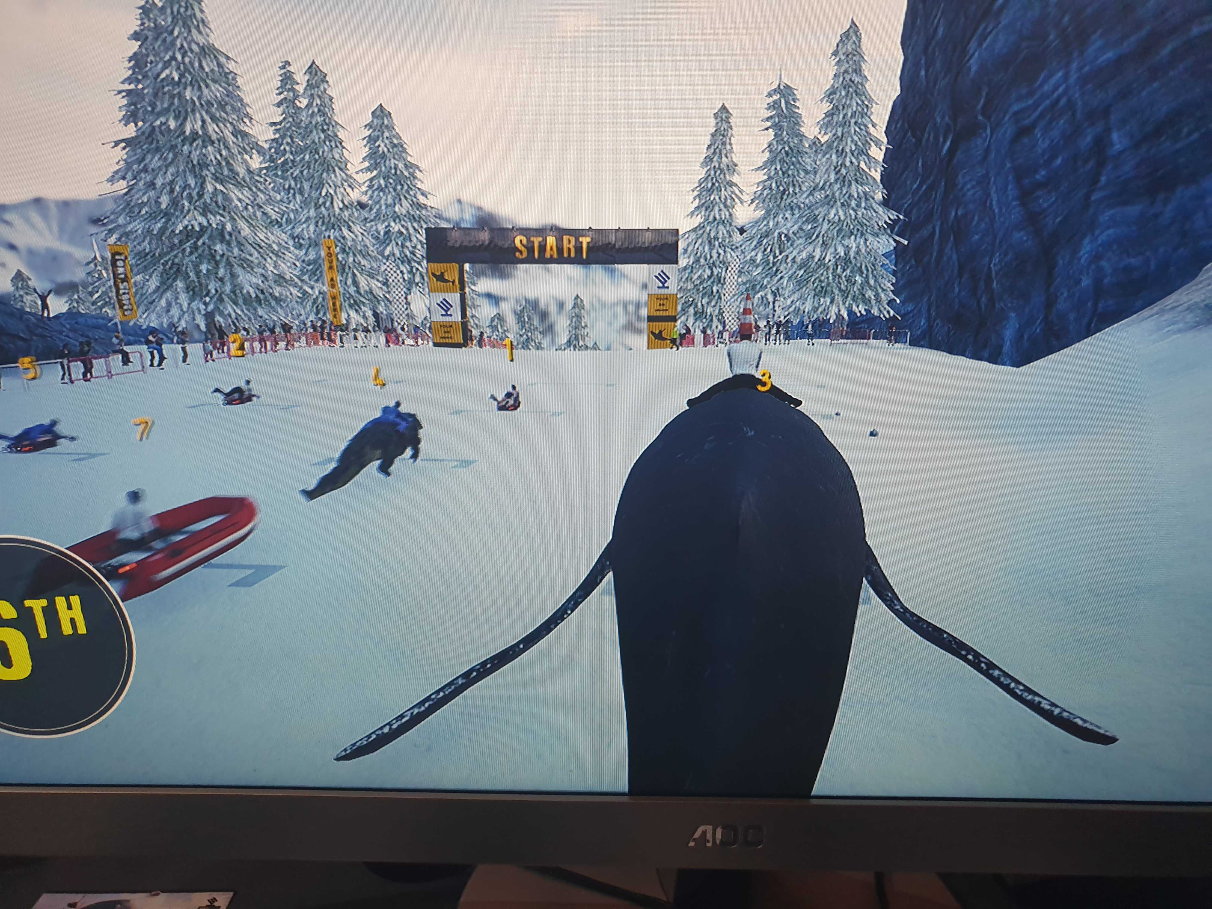 He won the race, but the whale took his cone. Now sober, he realised the Duke would never get his cone. It shook him to the core.

I lost Dave but found Streets Of Rage 4. Unprofitable.
A harried Graham just walked past me so I am following him at a dist... no wait, lost him. Arse.

I successfully escaped from Citytron! (and found a wild Alec!) 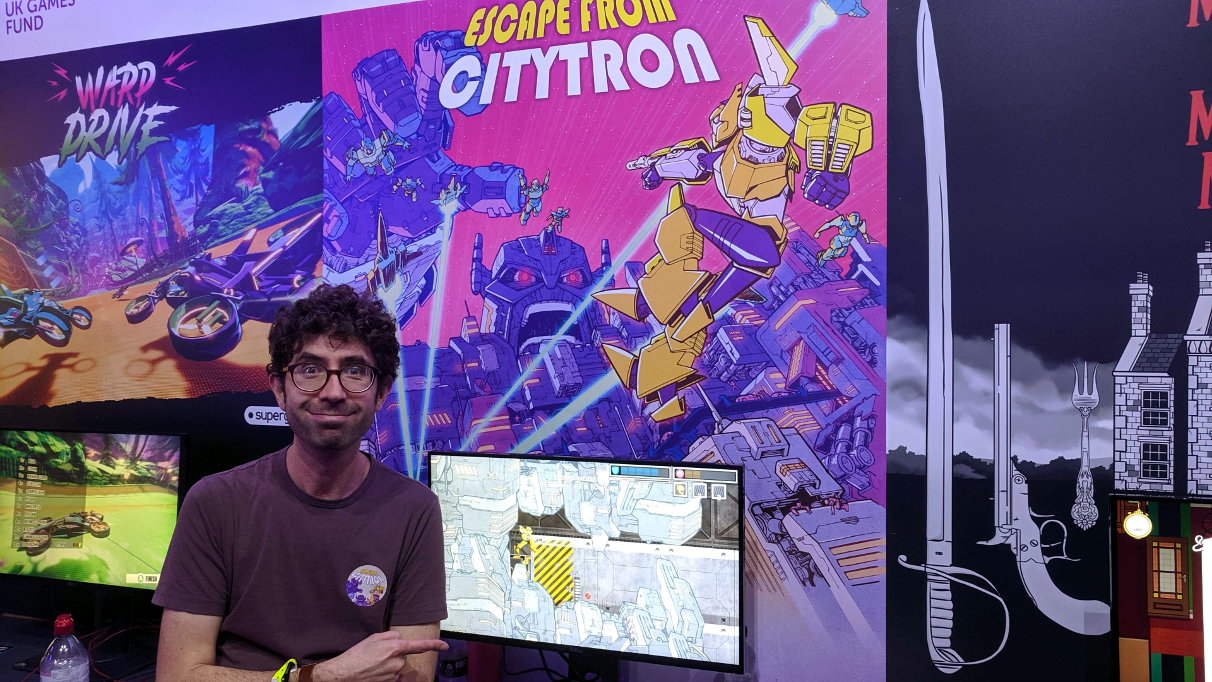 I just walked past a time traveller in an Anonymous mask.
I moved back to the good office. Nobody tells Unknown Pleasures what to do.

Katharine has found a way to escape all her adoring fans. 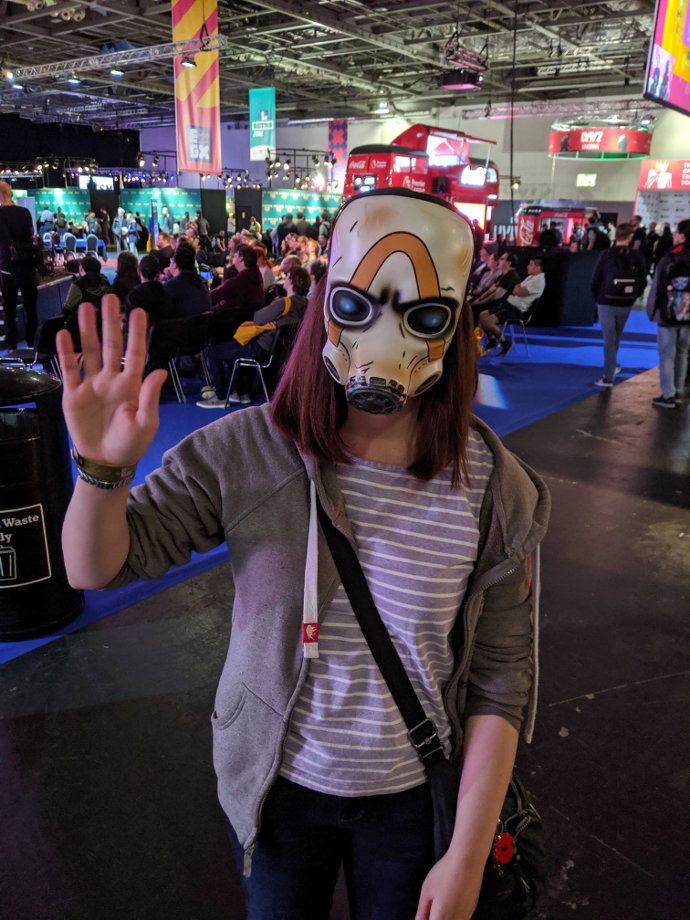 Found an FMV skateboarding game. Should have recorded Brendy's collarbone wipeout for one of the bad endings. 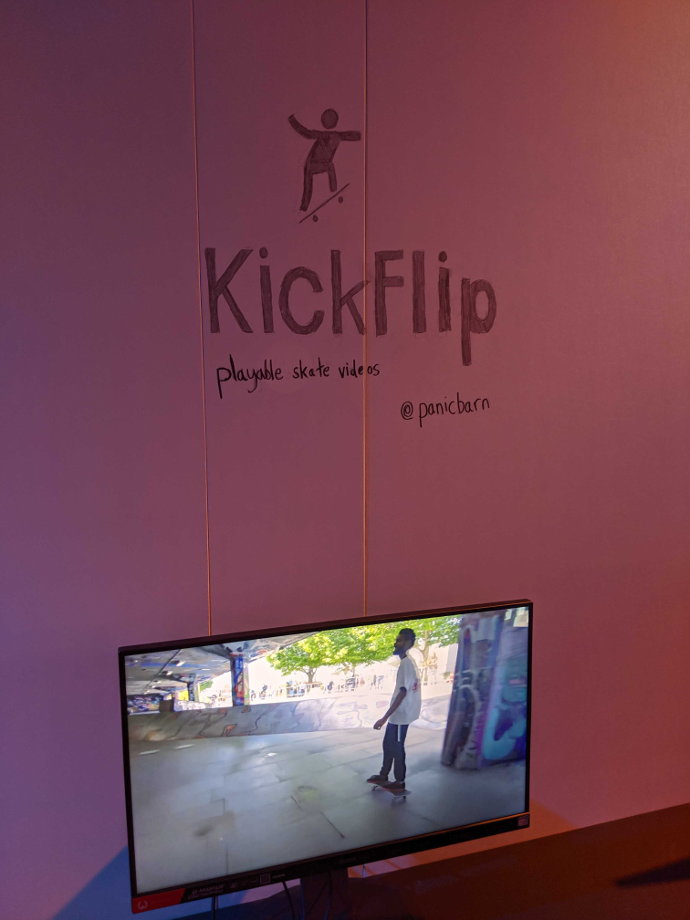 Sin: We have been moved to an inferior room. There is no kettle and I think the toilet is blocked. Our enemies toy with us.
Alice: It's true, we can't even get in without a key card and there is... One (1) key card. 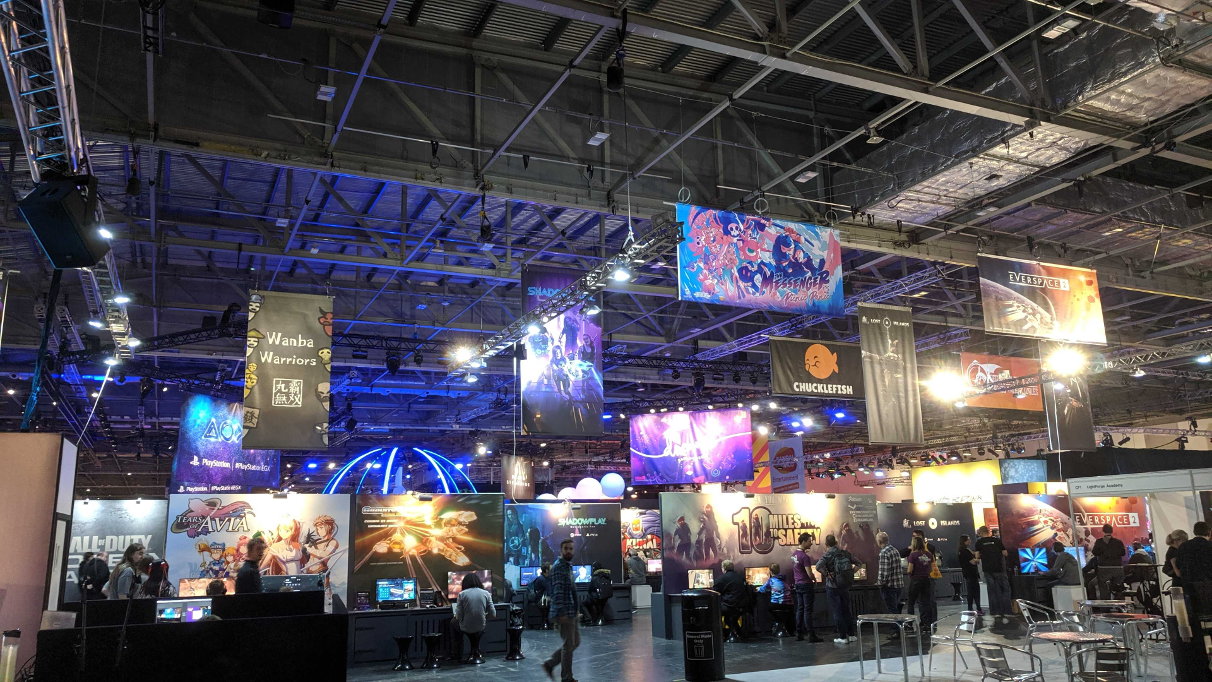 Skatebird is immediately fun and cute. I have been detached from the hivemind. Solo adventure!!! (going to get plasters)

Home of the RPS vid buds for the next four days. 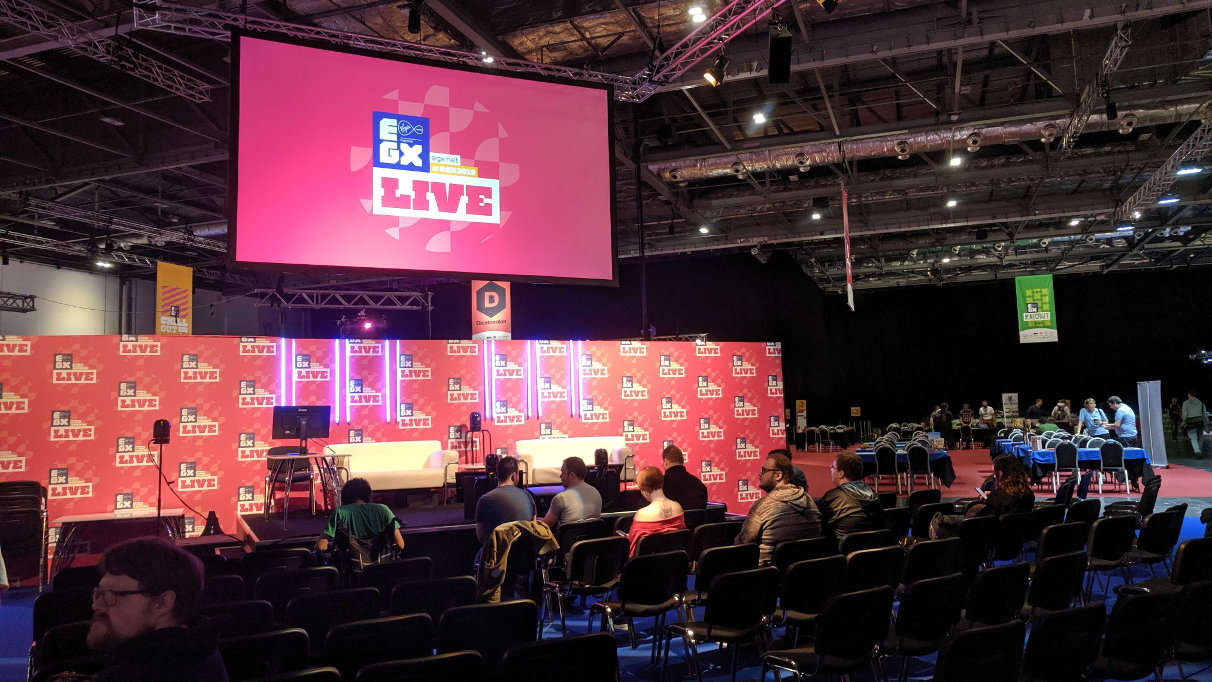 I'm not even at EGX. I'm in Berlin, where I'm going to be at PDXCON for the weekend, and I'm stuck in a hotel room with Ghoastus. He won't stop talking about Rome.

(Big thanks to Alice L for being my conduit to texts from EGX because my phone is very old) Alice L and Astrid are touring the floor. My shoes did not hurt when I danced until 3am but they do now. There is Pong. EGX is odd.

I am doing an EGX. The DLR is confusing and I forgot to bring leggings for tomorrow. I feel sick. 2/10

Just leaving for venue now, spotted what looks like pagan ritual in hotel courtyard. Thinking of sacrificing an animal to bless the video team with superb stream bantz. 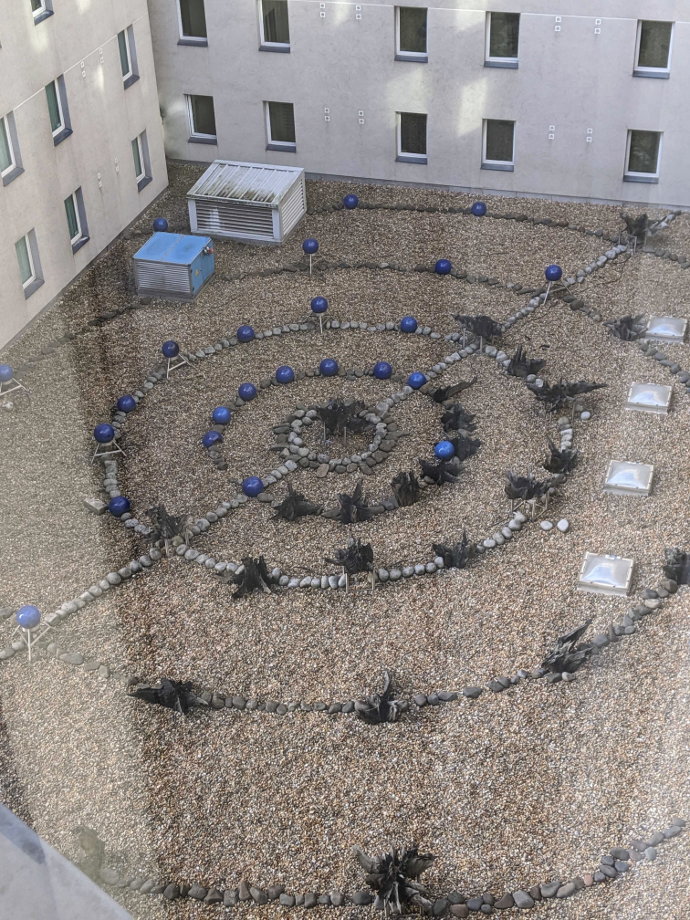 I am not yet at EGX. It falls to the Alices to keep the RPS tugboat spluttering along, so I'm in the office.