The bearded warrior looks exhausted. Part of a band of mercenaries, he blinks slowly at us. Even while the player chooses their next words, the crease-eyed humans and horned Varls of The Banner Saga 3 stand there, blinking slowly. Their hair fluttering, eyes searching you for intent. These are quiet moments of incidental detail. Twitching moustaches, billowing capes, tensing fists. They are looping animations, designed to bring life to otherwise static moments, but they are a smooth and subtle reminder that The Banner Saga remains one of the most beautifully animated game trilogies in existence. This tired axeman is just one of the finely-drawn fighters of the series finale. Arnie Jorgensen, Creative Director at Stoic, seems happy to let him rest.

The first game, a turn-based strategy-RPG about humans and Varls travelling from one settlement to another, was welcomed by Alec and Adam as an “uncommonly beautiful” game of giants and conversation. Steven Messner’s Banner Saga 2 review called the sequel “almost as enchanting as cracking open the weathered pages of my favorite fantasy novels”. The final game in the trilogy will round off this story, taking the characters that have survived the player’s decision-making skills into a dark realm that's slowly swallowing the rest of the world.

Your decisions have carried on, and the setting remains a fantasy dark age but one where this dark veil has spread over most of civilisation, alongside corrupted foes. You head behind this veil with a caravan of mercenaries to find “melted villages” and “forests curled like fish hooks”. The enemies, which still accost you on a polite, turn-based grid, are the misshapen victims of this atmosphere. Hunched archers and gnarled Varls. The ruins of Strand, a village from the first game, will also make an appearance.

But the caravan making their way through the darkness is only one side of the story. Another group of characters remains in a city called Arberrang, the only city that hasn’t been overtaken by the Dredge, the stoney, apocalyptic foes you’ve been fighting and fleeing from the whole series. Of course, it’s under siege and overcrowded (“Like a boiling pot,” says Jorgensen). You’ll still move from one area to another in the style of a long entourage. But this time it’s district-by-district, street-by-street. There’s nowhere else to go. As the besieged warriors of Arberrang, you’re trying to buy the caravan passing through the shroud enough time to do their thing – find the source of the darkness and stop it. 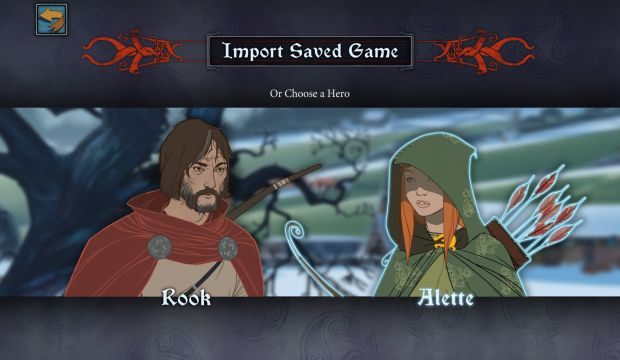 “We’ve really taken our time to make sure the endings are as satisfying as possible… It’s a very wide range of endings you can have in this game and they come back to decisions you’ve made in Banner Saga 1 and Banner Saga 2 which you thought could have been small decisions.”

Like the Mass Effect games, seeing a character die in the earlier Banner Sagas means they’re missing from the later games, whereas another player might have kept that character alive and well. A lost battle also doesn’t result in a "game over" screen. The story simply continues with some negative consequences. You can lose supplies or even one of your important heroes (and that attitude continues in the third instalment). This has made it increasingly difficult for Stoic to develop each successive game. The choices, victories and losses all grow into a twisted tree of possibilities, and they have to keep track of every branch.

“It also feels good to end it because I don’t think we could do another,” says Jorgensen. “It’s become unwieldy because we’re carrying through all the decisions you’ve made… so we’re also thinking: if we had to do a fourth, would the whole thing fall down upon itself? Collapse under it’s own weight?”

There have been a few imitators of the Banner Saga, mostly in their animation style. But if another studio wanted to copy their method of creating a branching storyline across multiple games, would Jorgensen recommend it?

“It’s a very weird template,” he says. “If I had talked to them I would have said ‘don’t do this’. You know, I think there’s a good reason why companies like BioWare do Dragon Age 1, and then Dragon Age 2 is totally different.

“I would tell people to be very careful about what we just did. It’s worked but man it gets dodgy. Like, will people be interested in your same gameplay for six years? I don’t know. It’s a concern. And we did it, or hopefully we’re doing it with Banner Saga 3, but it’s touch and go, you know.” 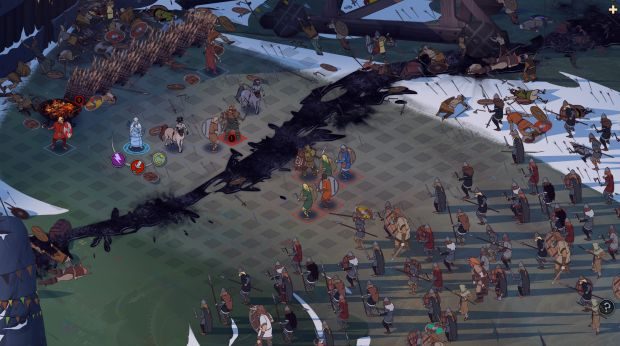 Like he implies, the game itself hasn’t changed much in six years. This is still a world of turn-based battles and stat-boosting charms. But there have been some changes. In the darklands there’s a new turn counter. If you defeat all enemies before this "timer" runs out, then you can choose to flee before the next waves comes. Or you can take a breather and prepare for more baddies. It’s designed, says Jorgensen, to represent how the caravan in the darkness is under pressure, constantly attacked as they travel. But it’s also there for people who want to crack on with the journey. Wipe the board clean and you can move on.

Those looking to earn extra rewards and items can fight multiple waves. Between each wave, there’s a moment of respite in which you can see the direction from which your fresh foes will throw themselves into the fight. You also get a chance to put some of your fighters “on the bench” and replace them with healthy warriors. But these waves won’t be endless – they only go as high as four and there’s a final boss if you keep battling, who will drop shiny bits of equipment when you land the ultimate blow. That’s useful, as there aren’t exactly any mercantile geezers selling talismans by the side of the road in this hostile, purple haze.

There’s also new characters, bringing the count of notable heroes to 40. Bulwark is a strong, tanky warrior of the Dredge. That’s the traditional enemy of your clans but he’s now fighting alongside you, for reasons players of the second game might remember. He has the ill-tempered ability to slam the ground and knock everyone back. You also get to play as Juno, the shady lady who’s leading your band through the darkness, like some suspicious tour guide. If she falls in battle, she stays on the field as a spirit, and some purple glowing “fonts” appear on the grid. Order her ghost to walk over these fonts, then return to her body and she’ll be fully revived. 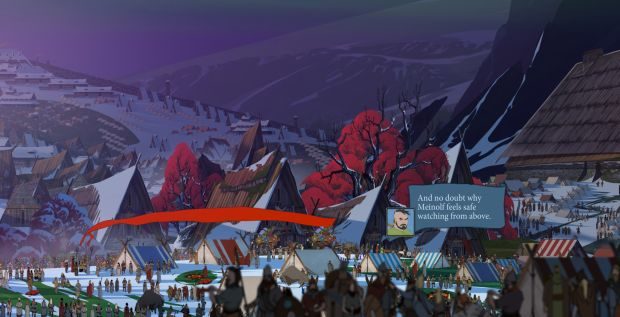 There are more additions and tweaks. New charms and keepsakes, as well as all those carrying over from previous games. But there’s also a new system of giving your clansfolk special titles. You promote fighters with Renown (the equivalent of good ol’ XP) but you can also grant them a fierce name. The Wolf, The Mountain, The Foolish. All of these grant unique abilities and bonuses to stats. But you can’t double up, nor can you share titles between characters. There can be only one Mountain, for example. And if that character dies over the course of the story, you won’t get the title back. After all, who can live up to Bulwark the Granite One?

But as with previous games, the art and animation is its most striking feature. Some characters are based on the likenesses of developers themselves, or their other halves. Folka is based on the wife of the game’s writer, Alex Thomas. Yrsa is based on the partner of the studio’s co-founder John Watson. And that bearded warrior who looks so tired? That's Petrus, aka Producer Zeb West. He's also sitting with Jorgensen and I, talking about the game. Unfortunately my recorder doesn’t pick up his voice, but trust me, he looks less weary in real life. 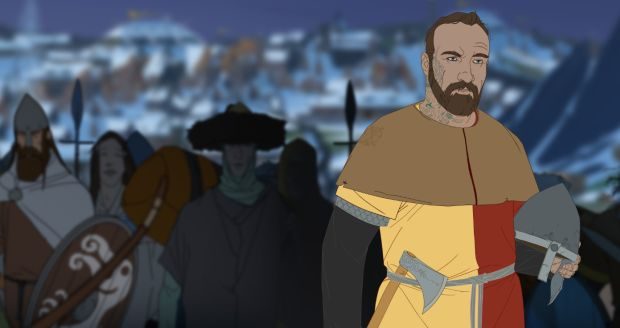 Alongside these faces you’ll find the visages of various Kickstarter backers. Character motions, meanwhile, were recorded in Jorgensen’s garden, then sent to be rotoscoped. It’s the same homebrew method they used for the previous games. Jorgensen’s biggest problem, when it comes to managing the animators, is that, if anything, they are too eager to make their characters look outstanding. He's often telling them, he says, to tone it down.

But now that the Banner Saga is coming to a close, will the studio keep using the animation method that made their name? Will they keep making grid-based battlers? Or are they keen to try something altogether new?

“The only thing we know is that Stoic is going to be a company that’s known for strategy RPGs,” says Jorgensen. “And that doesn’t mean turn-based strategy but we love strategy in our games on some level, and we love RPGs. As far the art itself, we’ll get to that when we start getting deeper into the next game.”

For now, they plan to be “ankle deep” in DLC but admit that this plan is liable to change if the community's interest in their striking, Viking world dries up. At which point, they’ll move onto the next thing. It doesn’t mean that the Banner Saga’s world will be abandoned, because they like this land of man and beast. But any future instalment would be divorced from the current trilogy.

“If we revisit The Banner Saga in the future,” says Jorgensen, “we’ll probably take a really different look at it.”

The Banner Saga 3 is scheduled to release on July 24