I'll be frank: The Bard's Tale IV looks like what I'd expect to see if I found a DVD-ROM from 2005 with 'Legend of Fantasy: Mages & Goblins' scrawled on it. My every instinct, after the first few minutes with it, was to run screaming from its Bratz doll faces and onslaught of fol-de-rol. Books, covers and all that, though: underneath its soupy presentation, the first few hours of Wasteland 2/Torment: Wives Of Hans Gruber studio inXile's latest act of Kickstarted ancient RPG necromancy are an enticing blend of roleplaying old and new, and of monster-bothering and puzzle-solving.

I've been playing a six-hour beta build of the Bard's Tale IV, which is apparently very similar to the demo version soon to arrive with backers. Full release is slated for September, so it can't be too far off what we'll ultimately all be getting. Setting-wise, there elves and goblins, magic and dungeons, inns and gold and all that jazz. The twist upon these sword'n'sorcery tropes is more tonal than anything else - this new Bard's Tale pulls from Scots Gaelic culture to inform its music, outfits and even character accents. I.e. the dwarves are Scottish, as dwarves so often are, but so is everybody else.

I wouldn't say it goes far enough into this stuff to feel truly distinctive, but it's certainly a step to the left of the usual D&D or Elder Scrolls take on high fantasy, and it's a welcome reprieve from Medieval Fayre-quality English toff impersonations. You absolutely don't need any prior knowledge of Bard's Tale games, either the original 90s trio or the maligned, satirical attempted reboot from last decade, to click with this: really it is, with the greatest will in the world towards its Scots inflections, Just Another Fantasy World.

In terms of what you do, this is a first-person, party-based RPG that's much more interested in how you use your various team-members and the placement thereof to solve problems than it is the fate of a central character. The Legend of Grimrock would be the nearest point of comparison, but it's not shackled to tile-by-tile movement, nor do you feel quite so solitary. You peg it around in full real-time, with full analogue free-look, as you take up quests and trade armaments in NPC hubs and scour dungeons for secrets, traps and a path through their winding mazes.

Y'know, find the hidden switch, push the boulder onto the trigger, place the correct sequence of items in front of the statue - all that good stuff, but generally a little less cryptic about it than Grimrock was. 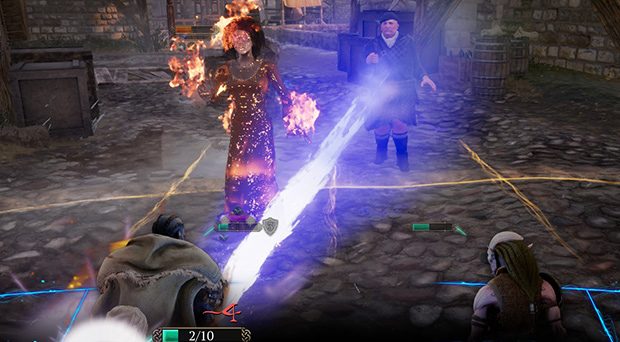 In combat, there's a switch to turn-based, your gang and their opponents arranged in a messy grid - 3D enemies taking up the bulk of the screen, while your guys are crushed into icons along the bottom that collide with the rest of interface. Bard IV is trying to have its cake and eat it, in terms of being resolutely single-perspective first-person but needing to present and co-ordinate a squad of up to six, and it hasn't quite worked. It's serviceable, but it sure ain't elegant.

What it's doing underneath that smoosh of squares and character headshots is a good time, though. Who your folks can attack depends on where in the grid they are, so there's an ongoing tension over whether to spend your action points - 'opportunities' here - on stabbing whoever's in range or on moving closer to an already-injured or particularly lethal enemy. Then there's the need to interrupt lads who are gearing up to cast devastating spells, or on getting your tank in front of your own spellcaster, and on needing to generate spell points by dedicating the latter's turn to mediation.

Plus your attacks usually need a turn or two to recharge, or need to be comboed with other ones, or - there's plenty to juggle, is what I'm saying. It's far from overwhelming, but straightforward attack-spamming it most certainly is not. It's strategic, boardgame-like, thoughtful - and massively customisable too. Each of your characters can only field three skills at once, so working out the savvy combinations as you upgrade and equip your guys is a massive part of the game.

Then there are the titular bards. You don't need to make your 'main' character a boozy musician, but seeing as bards are the signature fighters of this series, it's a shame to not have one of 'em on your squad, chugging pints and banging out battlesongs. They're a variant of mages, in effect, but they get soused rather than meditate in order to generate their spellpoints. Which instrument you equip your songsmith with affects what they can do in battle - drums make enemies catch on fire, harps reduce your team's cooldowns and so forth.

It's all weirdly non-musical in practice, however, and similarly the drunkeness is only portrayed in terms of ability point-wrangling, not any visible squiffy chaos. Again, it's that issue of the game wanting a single, window-on-the-world perspective at all times, so we're denied swaying drunkards or visible harpsichord shredding. Alice O observed that Bard IV combat screenshots looked like a motley crowd moshing along to a deliriously OTT metal gig, and man, imagine that roleplaying game. 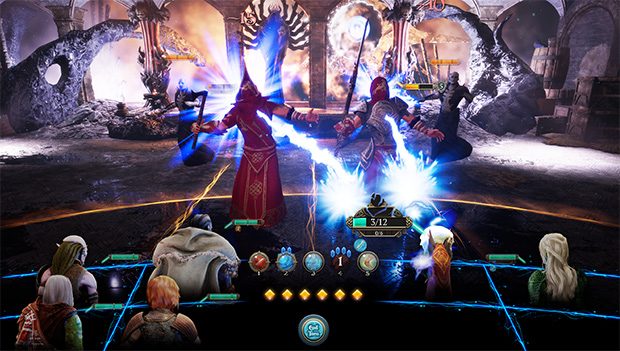 Again, this is a beta build, so we might yet see a little more gloss and pep, even though it seems broadly robust and glitch-free. I'd also love to see it resolve a few facepalm issues before full release. E.g. when Ian Tutorial joins your party early in the game but doesn't give back all the cool loot you equipped him with when he reverts to NPC status later. Or occasional thoughtful savepoint placement, such as my having to repeat an entire, long puzzle-dungeon because immediately after solving it the game threw me down a surprise trapdoor and into a pit of nasty baddies. Just a few polish issues, really, that mean Bard IV occasionally crosses the line from jaunty 90s no-handholding ethos and into Being A Bit Of A Dick.

I reckon they'll probably have cleaned up many of those acts by the mooted September launch, but I'd also love them to fix NPC faces that look like someone threw a bowl of porridge at a wall and then painted mascara over it. The weird thing there is that some of the environments and the less humanlike characters look half-decent, even if there's a persistent air of last-generation Plasticine. I couldn't begin to guess what's gone wrong, and I'm not usually much of a graphics gonk, but the only people you actually have conversations with looking like dolls that just spent half an hour lying in the middle of a busy road rather lets the side down. 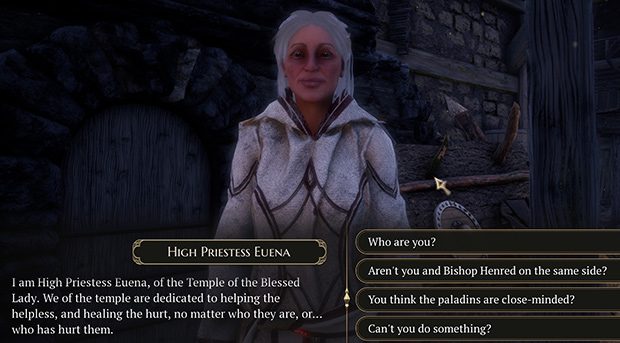 Far more importantly, I've had a good time piecing together these Grimrock-lite puzzle-dungeons, looking out for sigils and buttons that open up new passages, sneaking up on baddies and most of all arranging the jigsaw pieces of my party to take down much stronger foes efficiently.

Bard's Tale IV feels a bit wonkier and a lot cheaper than I'd been expecting, given the flashy Kickstarter pitch, but it's definitely onto something - an old-fashioned, party-based dungeon-solving RPG that doesn't feel too old-fashioned.

The Bard’s Tale IV: Barrows Deep is due for release on September 18.