December has provided a bounty of games at the long-awaited death of a hideous year, but its greatest and most unexpected treasure is already clear to me.

Suzerain is the modern successor to Hidden Agenda, an ancient political simulator I once described as "possibly the greatest political simulator ever made". A fictional nation still bleeding from civil war has just overthrown a dictator, and elected you to lead it into whatever future you think is right, just as the world begins to light up with the countless devastating proxy wars of the 1950s. It is superb. The game, I mean. Not the wars. Those are very bad.

Your main concerns are much like Hidden Agenda's: reconciling the communist and nationalist factions within your populace, without provoking either superpower as the strategic significance of the region climbs. Pulling the economy out of a recession, deciding what to do about the decades of infrastructural neglect, and all in such a way that you will be re-elected. It is a tall order.

All this takes place in an impressively detailed world, with both your Sordland and its neighbouring countries having detailed histories and politics, and dozens of characters making up the government. You must become familiar with many people, because Suzerain is in fact a visual novel-ish RPG as much as a sim.

The downside is that you lose those pro-active sandbox options, but the trade is well worth it, because it lets Suzerain be personal in a way that few political games are. Each of its characters has a detailed biography, and personalities and opinions strong enough to shine through any confusion about their fictional history. Factions are represented not just as numbers on a chart (there are almost no statistical screens, in fact, meaning some things can sneak up on you) but by ministers in parliament and judges in the supreme court, each of which you must navigate if you're to enact lasting change. And that means winning over individuals. It is very much a game about deciding who to trust, who to placate, and even who to feign trust in to get them to reveal their cards. 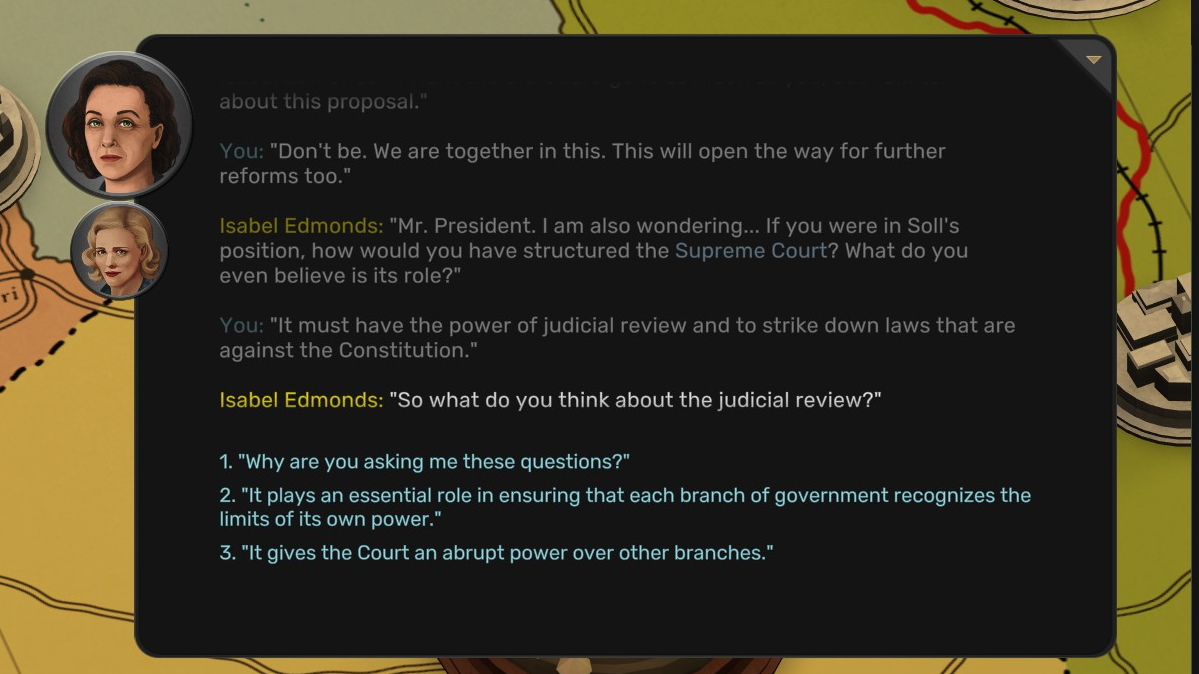 And oh my, do some of them have cards. By the time you start to figure out which, you've probably already formed loyalties. I had no idea I would come to consider a fictional government advisor "a badass", nor shed actual tears at how my story ended after we achieved the impossible together. We averted a civil war, passed a radical but balanced new constitution through a hostile court, and turned a war into an alliance through sheer diplomacy. In its excellent faux-UN scene, one nation condemned the entire assembly, but explicitly singled my country out as an honest and noble exception. Because of me. Because of what I did.

This is a game that had me covering my mouth with disappointment at a betrayal, howling in triumph at cross-examining some legislation, and saying aloud to an imaginary billionaire "Threaten me again son and I will nationalise your shit".

The press will lie. Parliament will ask you to sign bills with misleading titles. The people will inspire a song called "My Electorate Are Stupid Pigs". Your principles may be your strongest weapon or your downfall. This is politics. This is Suzerain.