Just when you thought the excellent Logitech G915 Lightspeed wireless keyboard couldn't get any better, Logitech have just gone and announced they're making a compact tenkeyless model of it, the G915 TKL. Launching this June for £200 (US pricing TBC), it's still going to cost you a pretty penny when it comes out next month, but if you've been searching for a space-saving gaming keyboard that does away with all those pesky wires, then the G915 TKL could be just the thing.

The G915 TKL uses the same low-profile GL switches as the regular G915, and you'll have a choice of their GL Linear, GL Tactile and GL Clicky switches when it launches next month, which are effectively Logitech's in-house equivalents of Cherry's MX smooth up and down Reds, bumpy Browns and loud, clacky Blues respectively. It also comes with Logitech's super fast Lightspeed wireless technology for responsive key presses while you're gaming and typing alike, making it the first Logitech G keyboard to combine it with their Lightsync RGB lighting in a tenkeyless form factor.

Even better, Logitech claim it will have a battery life of up to 40 hours at 100% brightness, which is pretty impressive when the regular G915 was only rated for 30 hours at 100% brightness. Indeed, turn its RGB lighting off and Logitech reckon you'll be able to extend that play time to a whopping 135 days, assuming you're using it for eight hours every day - which, given most people are working from home right now, is probably a pretty accurate reflection of its longevity.

Of course, the other benefits of opting for a compact keyboard are a bit null and void at the moment. Indeed, in Logitech's press release, they proclaim that lobbing off the number pad will make the G915 TKL much easier to "bring it to a friend's house" or "take it to a LAN party", which we all know is a bit of a pipe dream right now. Still, if you're short on space in your current lockdown environment, then the G915 TKL could be just what you need right now. 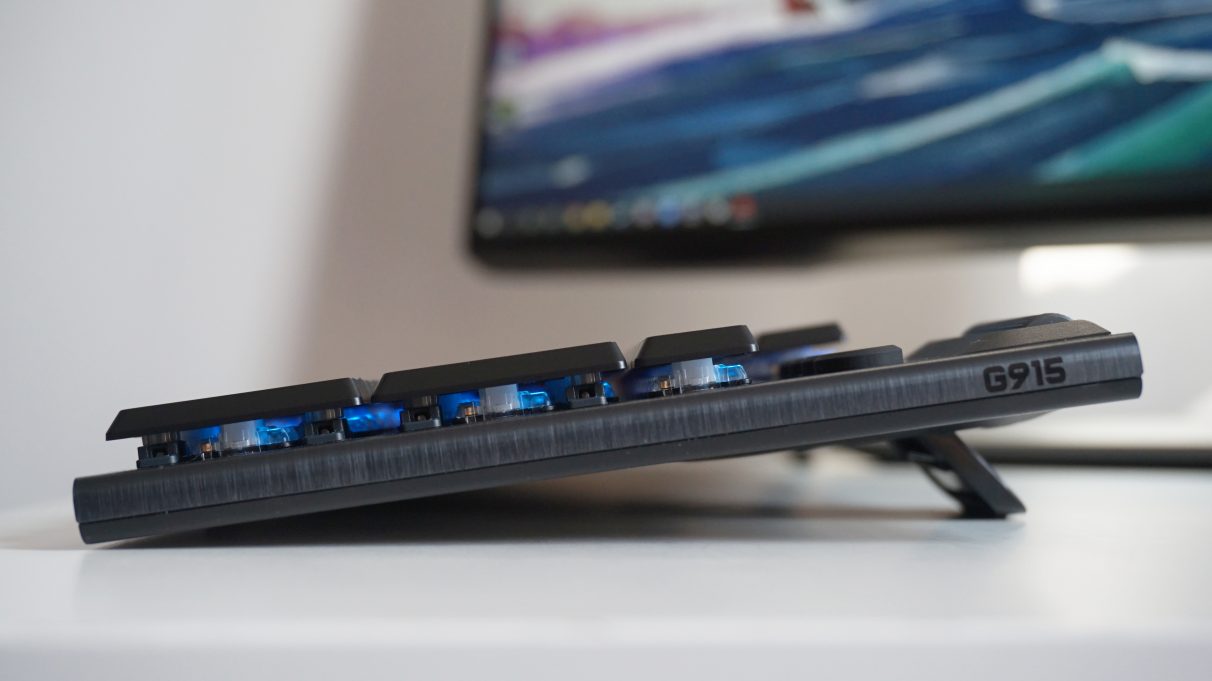 I had plenty of good things to say about the full-sized G915 when I reviewed it last year, and it's been sitting in my best gaming keyboard rankings ever since as the best wireless gaming keyboard you can buy today. For starters, its slim aluminium frame is a real beaut compared to other high-end keyboards, and its low-profile keys are brilliant for typing on. It also has a gorgeous volume roller in the top right, along with dedicated media keys just below it.

The good news is that the latter have been shifted to just above the Fn keys on the TKL version, so you're not losing any of the regular G915's functionality by opting for its smaller sibling. The volume roller is also still present and correct, albeit a bit smaller than its full-sized counterpart.

Of course, the only real hurdle is the fact that it's going to cost £200. Indeed, you can currently get the full-sized G915 for £199 over on Amazon UK, while its full-sized wired sibling, the G815 Lightsync (which is identical to the G915 apart from the giant wire sticking out the top) can be had for £140. I sort of wish the G915 TKL was nearer the G815 when it came to pricing, if only because it feels like the tenkeyless and full-sized models shouldn't cost exactly the same amount of money. Still, if the G915 TKL looks like it might be just up your street, then you can pre-order one on Logitech's website right now.