“There are too many games,” I cried when murder mystery The Council appeared last week, and this very much continues to be the case, but at least now I’ve had a moment to take Big Bad Wolf’s curious adventure game for a brief spin. Imagine LA Noire but in an 18th Century dinner party with heavy occult undertones.

The Council’s first episode, The Mad Ones, landed on March 13th, and sends its slightly smug protagonist Louis on a trip from Paris to a mysterious English island to search for his mother, secret society member and geriatric adventurer. I can’t shake the feeling that she’d make for a much more entertaining protagonist than her son, but she’s busy being somewhere else.

Back when Telltale released the first series of The Walking Dead, there was a lot of bemoaning of the death of puzzles, which of course never ended up happening. And even within Telltale’s licensed adventures there were still myriad puzzles; it’s just that they were all hidden in the dialogue. Figuring out the right things to say, appealing to characters based on what you know about them, trying to keep as many people as possible alive -- those were the puzzles. The Council makes that more overt.

There are three classes -- diplomat, occultist, detective -- each with skill trees that can affect Louis’ investigation and interrogations. Having certain occult skills could mean that you can decipher unusual symbols, while a diplomat might already be familiar with important guests at the party. 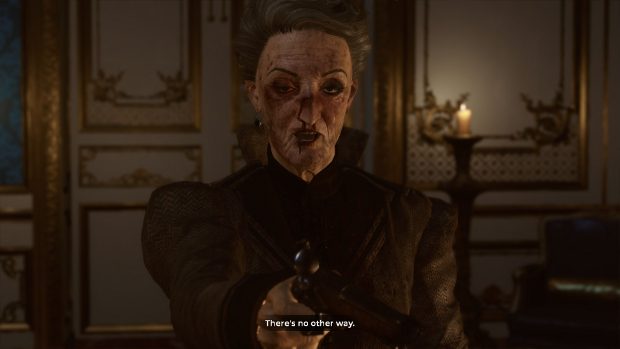 Dialogue becomes a war of words as you use your skills to make observations or put pressure on the person you’re chatting to. There are various ways to learn more about the guests, and that knowledge can be used to exploit vulnerabilities, getting Louis what he wants. Lies, blackmailing, flattery -- everything is fair game. As much as this seems like a natural progression from games like The Walking Dead and LA Noire, I’m equally reminded of Planescape: Torment and its spiritual successor, where skills can completely transform a conversation.

Unfortunately it’s a bit of an auditory nightmare. The accents are all over the place, and there’s very little that’s said with any conviction. It would be hard to say some of these lines and actually believe in them, mind. The release trailer should give you a taster.

Oh dear. And that’s quite a generous representation of the game’s voice acting quality. It gets much worse. It does somewhat diminish the gravitas of the intrigue and Machiavellian machinations that are going on inside the impressive mansion. Everyone sounds just a little silly and incredibly arch, while some of the lines you can utter are just wonderfully ridiculous. One of my first decisions was to proudly inform a complete stranger that I was part of a secret society. Then when this stranger decided to entrust a letter with me, the option “Sure, no worries” lead to Louis loudly swearing an oath. The absolute best one I heard is below. 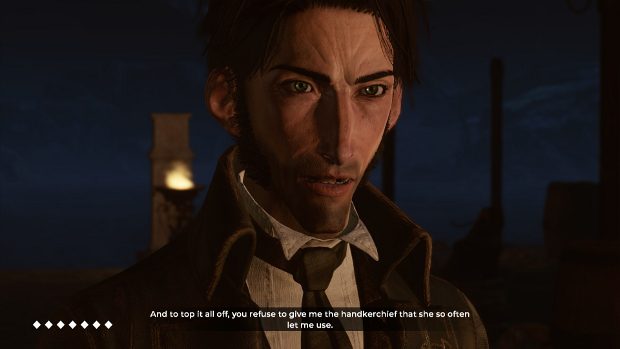 It’s a strange one! But I rather think I like it. Certainly enough to pick it up again when I’ve got some more time to explore the party and get into trouble. The first of five episodes it out now and you can get the lot on Steam and the Humble Store for £25.99/$29.99/€29.99.