The Division 2 is a big game, taking most folks around thirty hours of looting and shooting before you even meet its fourth set of 'endgame' villains. Next Friday's big update on April 5th will give players even more to chew on for free, especially those who have worked their way up through the World Tiers battling Black Tusk forces. Those who have looted and levelled all the way up to the end of World Tier 4 will soon have the chance to storm the home of the invading techno-mercenaries - the new Tidal Basin stronghold - and progress to Tier 5 with even more invaded missions.

The April 5th update (titled Invasion: Battle For DC) will be entirely free for everyone, and not part of the (briefly) season-pass-exclusive adventures to come. Ubisoft claim that the Tidal Basin stronghold will be the biggest, toughest and most boss-centric yet, and reminiscent of Shadow Moses island from Metal Gear Solid. Expect it to be packed with awful killbots and featuring three new special gear sets to collect. Once that's cleared up, things only get worse for DC, apparently with some narrative reason behind it. World Tier 5 will feature even more invaded missions, changing on a weekly rotation, and the checkpoint-free Heroic difficulty level. 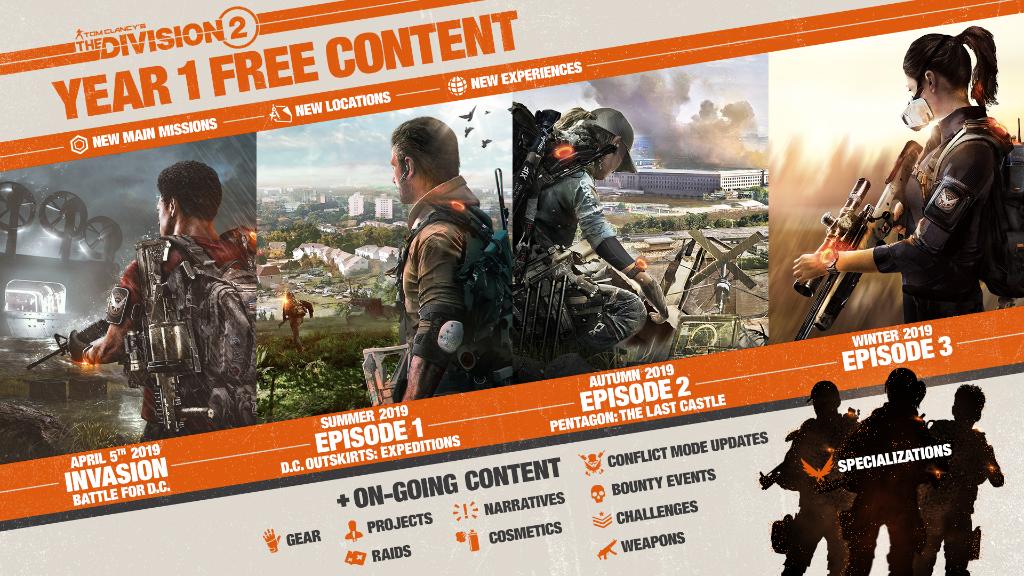 Before the April 5th update goes live, developers Massive have a patch due to roll out tomorrow to deal with some outstanding issues. They reckon they've hammered out some unusual performance drops, have crushed the last vestiges of the nasty bug causing skills to fizzle out early, and have worked out some kinks in normalising player stats in co-op. Looking forward, there's multiple story-focused episodes coming, the first sending players outside the city walls. Each episode will be accessible a week early if you have the season pass, but free for all after that, keeping players together.

The Black Tusk stronghold opens its gates on April 5th, but unless you're already stomping around in The Division 2's highest-level gear, you've still got your work cut out for you. Check out Dave's Irwin's guides to working your way through the World Tiers and begin that long, loot-filled climb. If you're still on the fence, check out Brendan's The Division 2 review - it's rather good. The game and the review.