As it turns out, there are some surprises when exploring Appalachia, even 25 years after being annihilated by nuclear bombs. Sometimes you’ll come across a creature you thought was only a myth, but turns out to be an alien from another galaxy. Or maybe you’ll uncover a cult that worships a local legend. What you might not expect to find is a group of vault dwellers standing around admiring a bunch of art installations, gazing thoughtfully at each other’s avant-garde use of Fallout 76’s base-building system. This is "1x1x76", the first art exhibition created in Bethesda's multiplayer wasteland.

Using the game’s base-building mechanics (which the game calls "CAMP") a group of players got together to create nine 1x1 squares. The project was coordinated by a player called "Appalachia Howie", but his original goal wasn’t to create an art project at all. 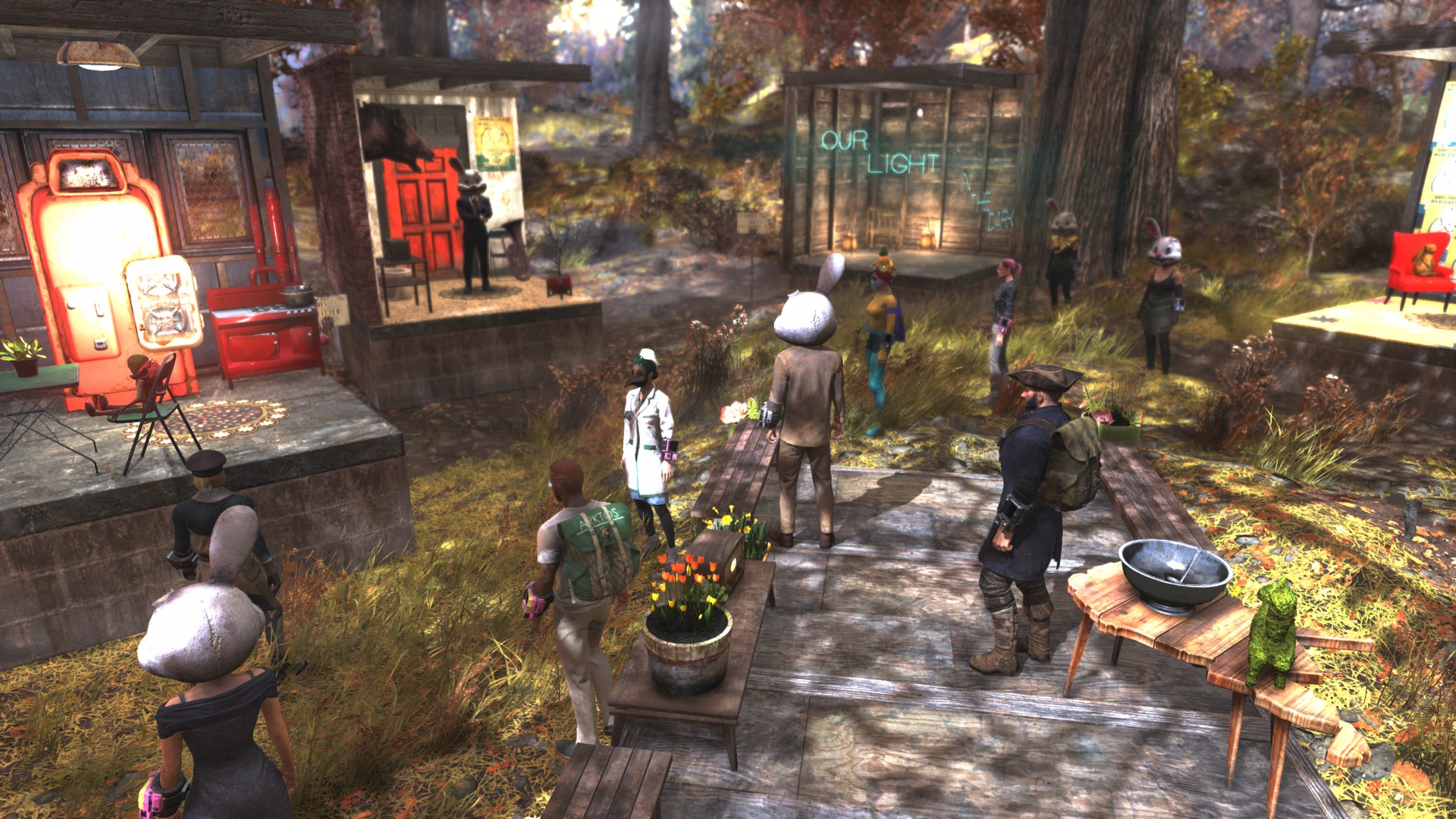 Howie has invested about 300 hours in Fallout 76, and most of that time has been consumed by building. He explained to me how it’s impossible to tell whether a floor is going to look good with a certain wall type until you’ve built it.

“I was working on a CAMP build," he said, "and I needed a mini version to compare base materials. I made these 'squares', and I was having a blast making designs.” 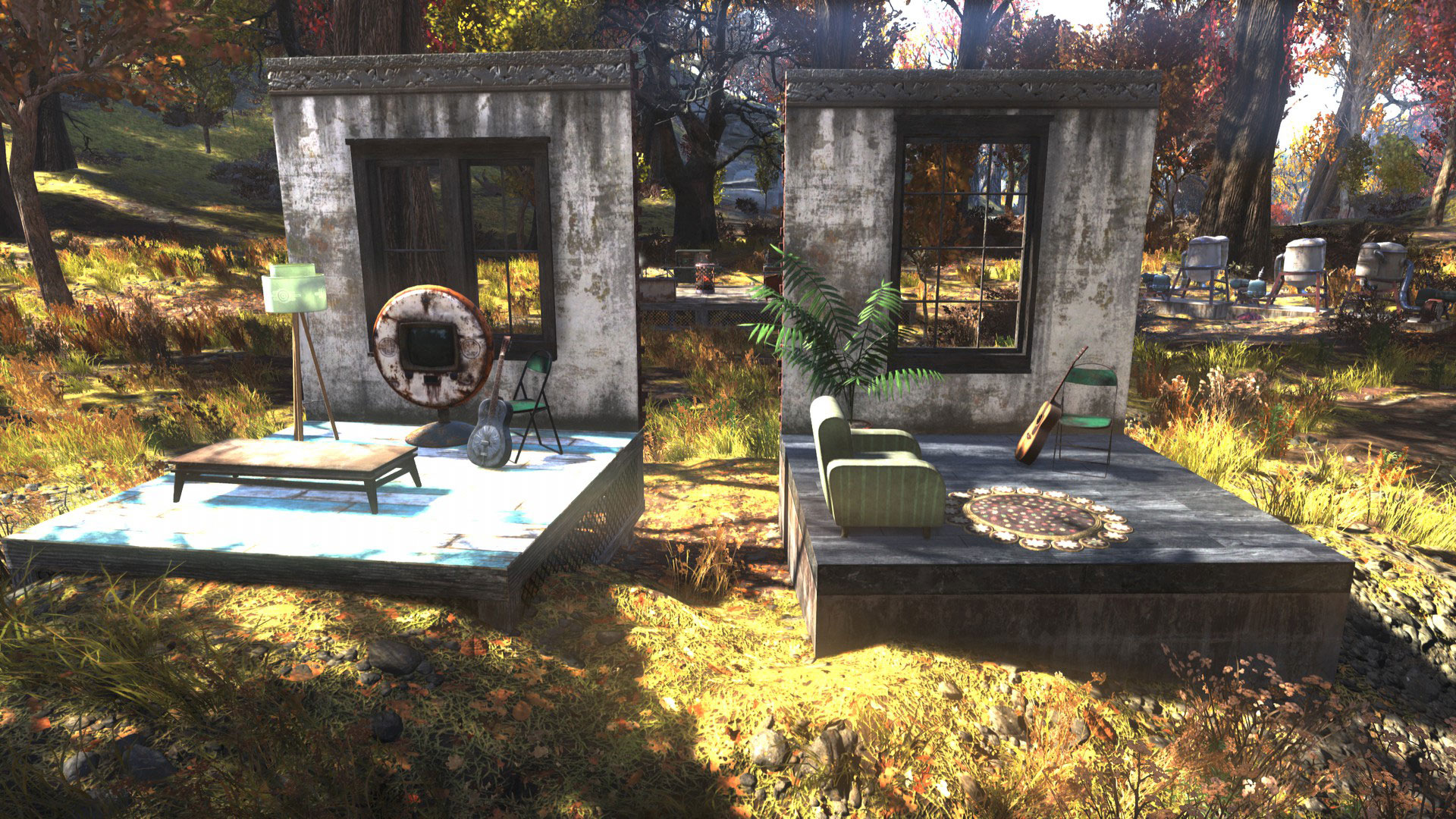 “Then it hit me! I’ll invite wastelanders to my CAMP, they can design their own, and I’ll display them like an art show.”

Appalachia Howie then shared his plan on Twitter, and soon he had nine budding wasteland artists ready to show off their creativity using nothing more that the items available in the CAMP system.

Most of the group of players who contributed to the art show are members of The Bunnyhood. The clan, identifiable from their headgear, was created as an Easter joke, but has since formed a tight-knit community of hardcore roleplayers, working together to have fun and create new things in the multiplayer survive 'em up. 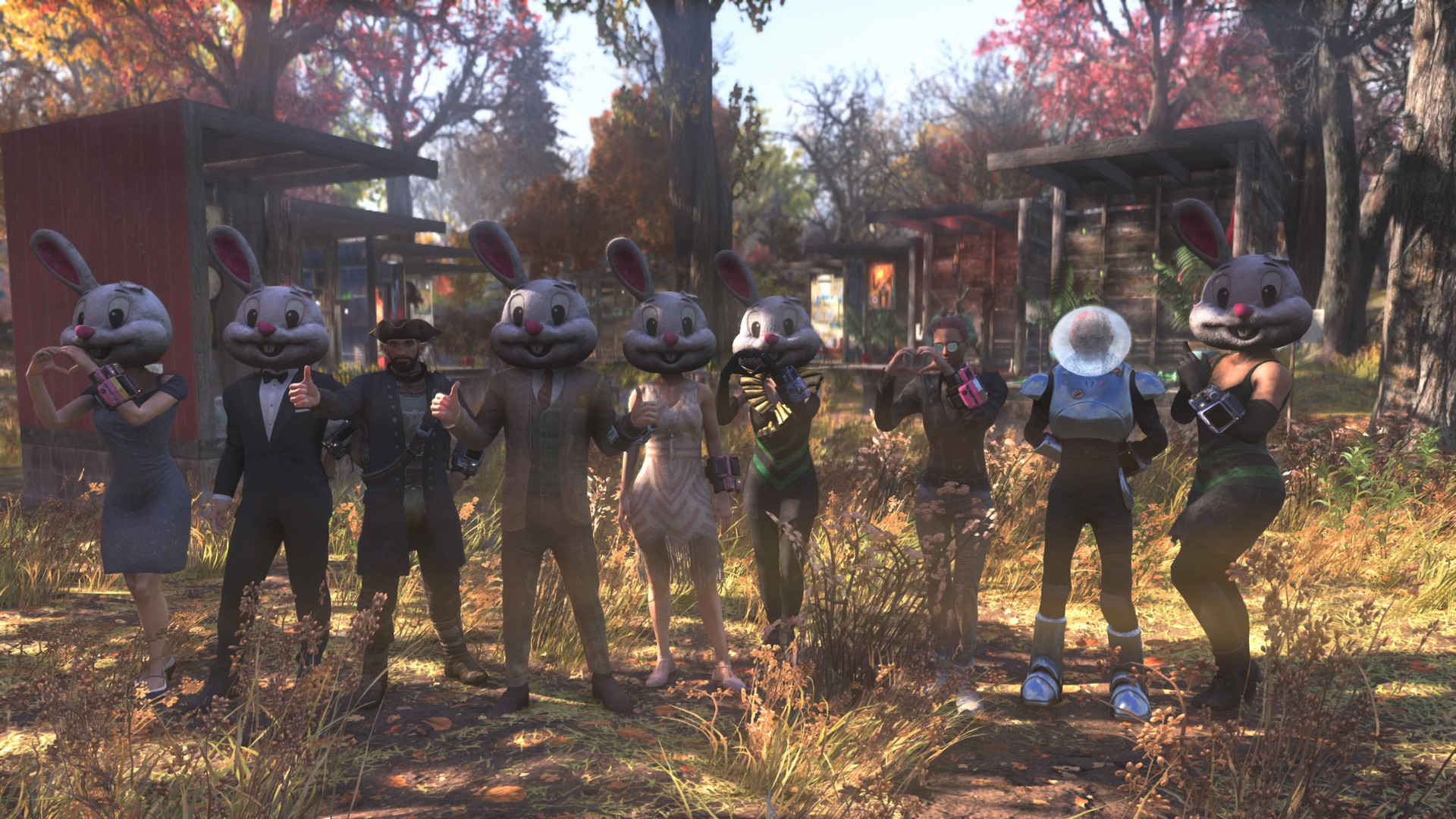 Speaking with each player involved with the gallery, it was clear that most of them had put some serious thought and consideration into their contributions. In fact one player, "KillDto", told me that his exhibit had been inspired by The Bunnyhood clan itself. 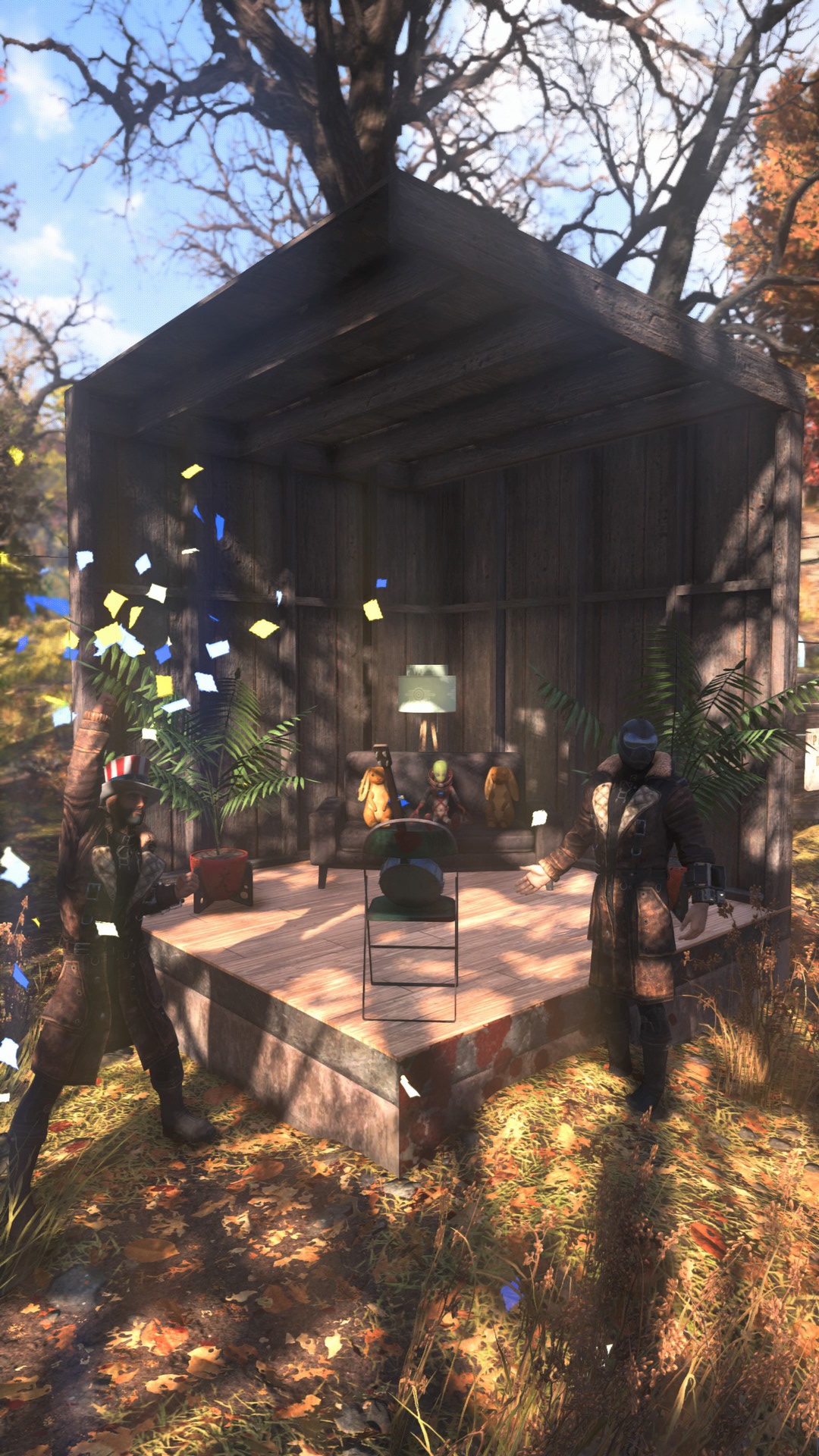 On the other hand, some players such as "MrsPrepper", a stay-at-home mother in real life with 1400 hours in Fallout 76, explained how, “this exhibit just came together.” Her exhibit, which features a lovely skull surrounded by a ravenous pack of baby crocodiles, has apparently inspired thoughts from others such as: “It reminds me of the circle of life” and “do you have trouble with hierarchies?” 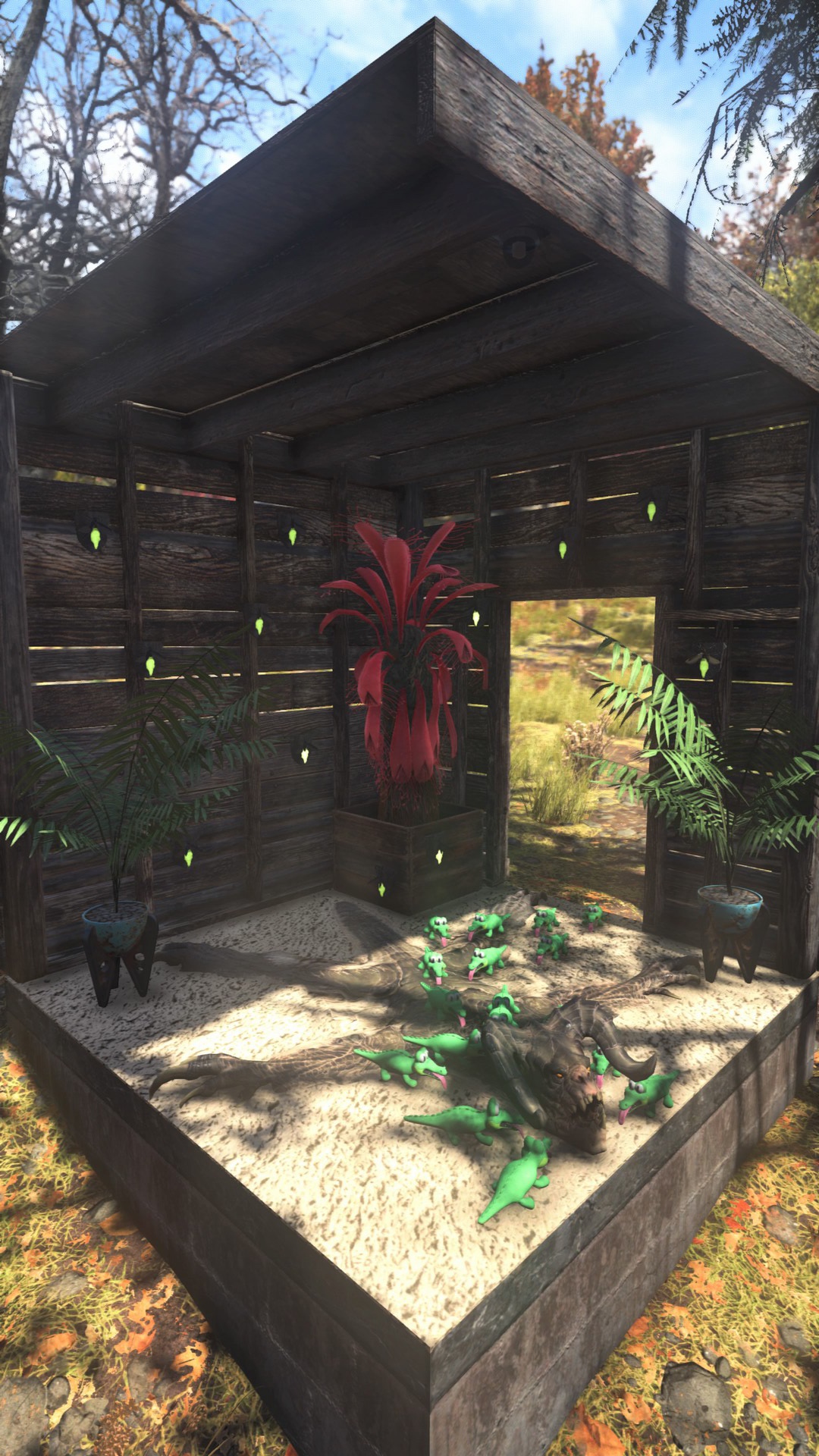 With her exhibit you can understand where some of those comments are coming from. I’d love to hear what those same people thought of the installation by player "Proxytato", below, which instantly conjures up images of Super Mutants forcing humans to beat each other to death with baseball bats. The cage surroundings caused me to have unpleasant flashbacks of Jack Baker’s basement in Resident Evil 7. 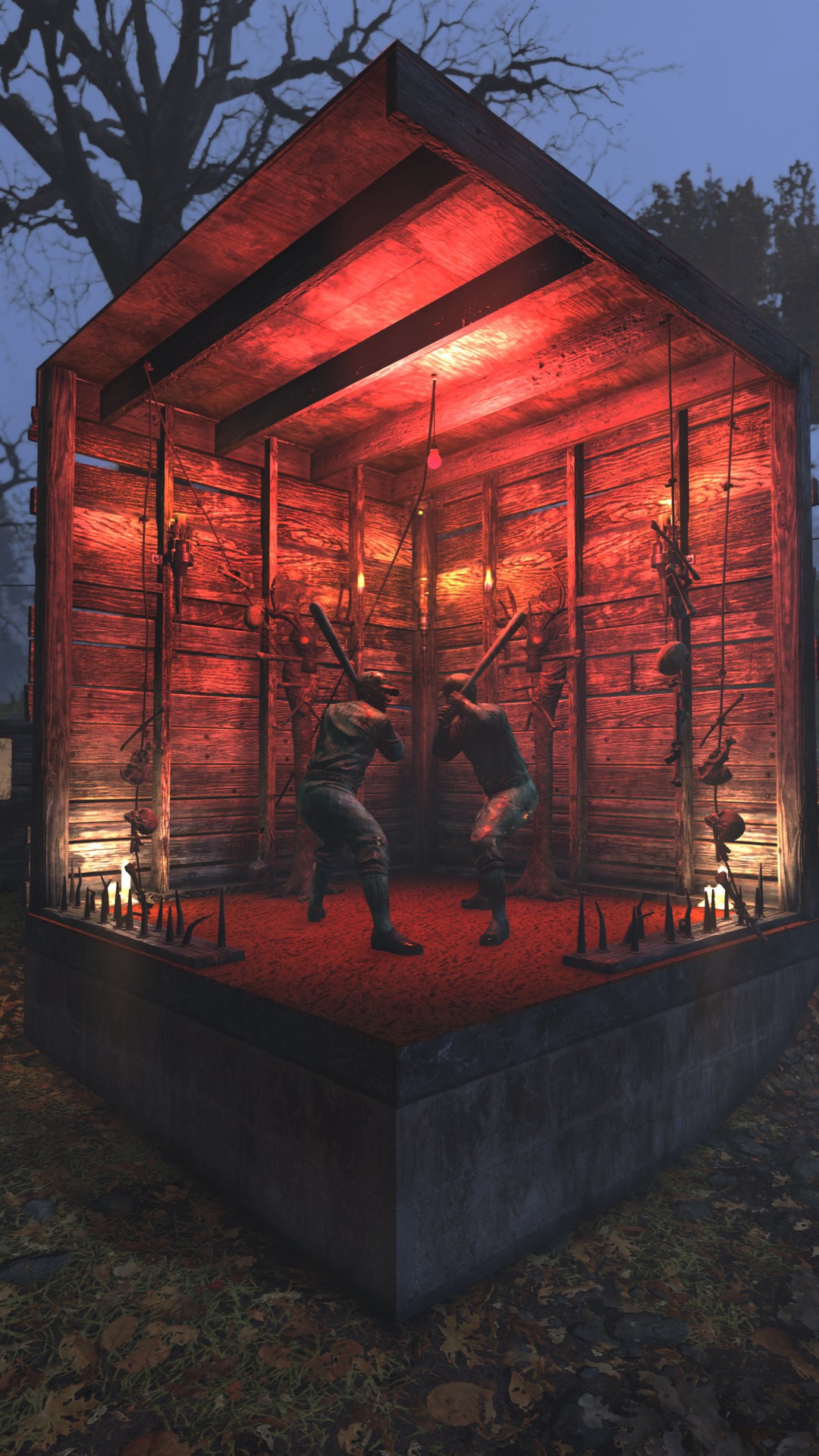 Talking to the people involved in the art show has shown me that everyone has their own reasons to play games. "WastelandSam", creator of the exhibit below, described how working in finance leaves no space for creativity, but Fallout 76 is his refuge. After he finished the game’s short story, he spent hours messing around with photo mode and building bases. The 1x1x76 gallery is, in a way, the culmination of all the reasons he keeps visiting this post-apocalypse. There's evidence of the serious sides of his life, in the form of overlapping mental health posters. Then again, he did tell me: “the addition of plushies was just to lighten it up a bit.” 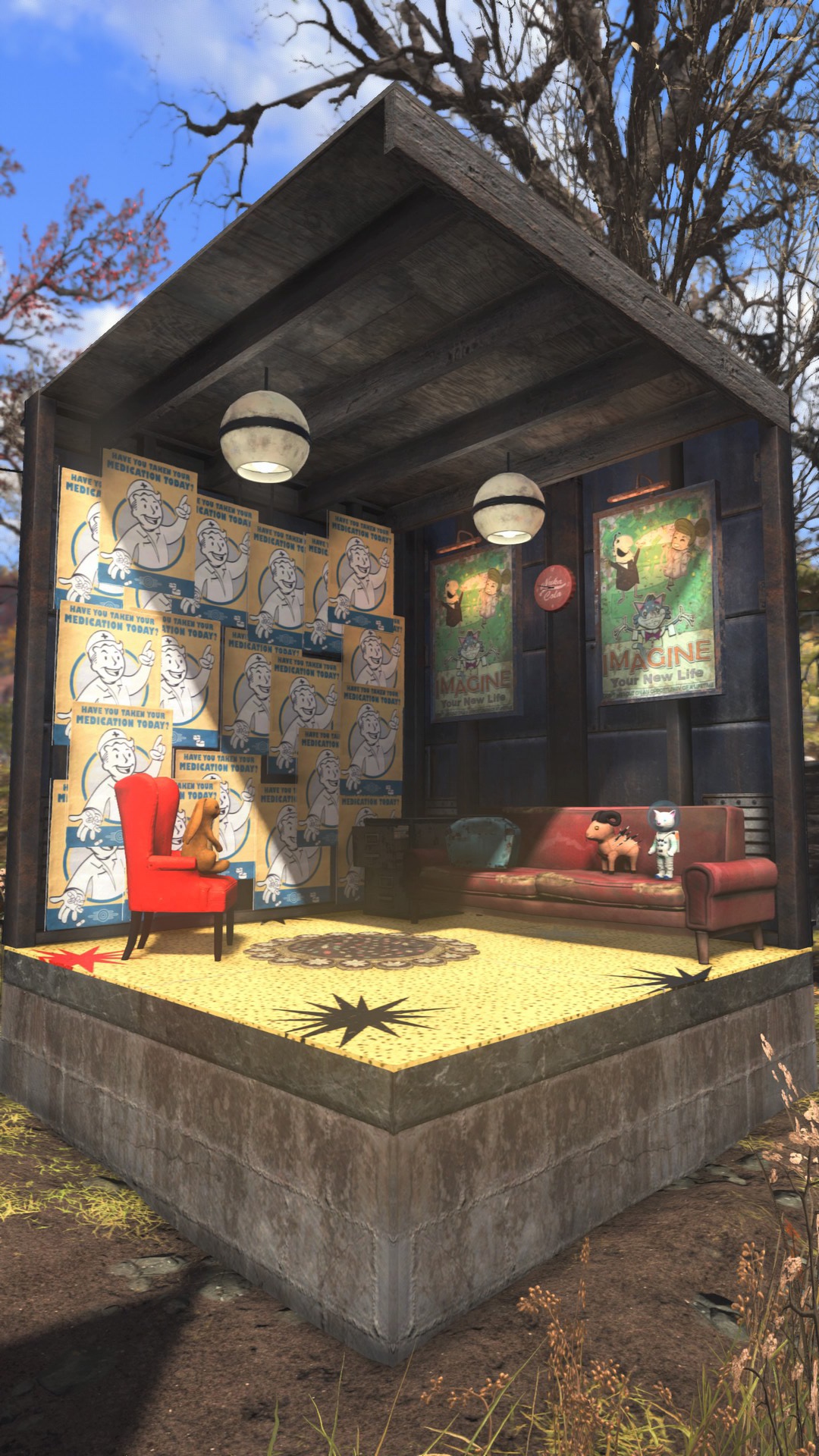 While I was exploring each exhibit in 1x1x76 there was one in particular that stood out for me, and Appalachia Howie told me it was also his favourite out of the whole project. 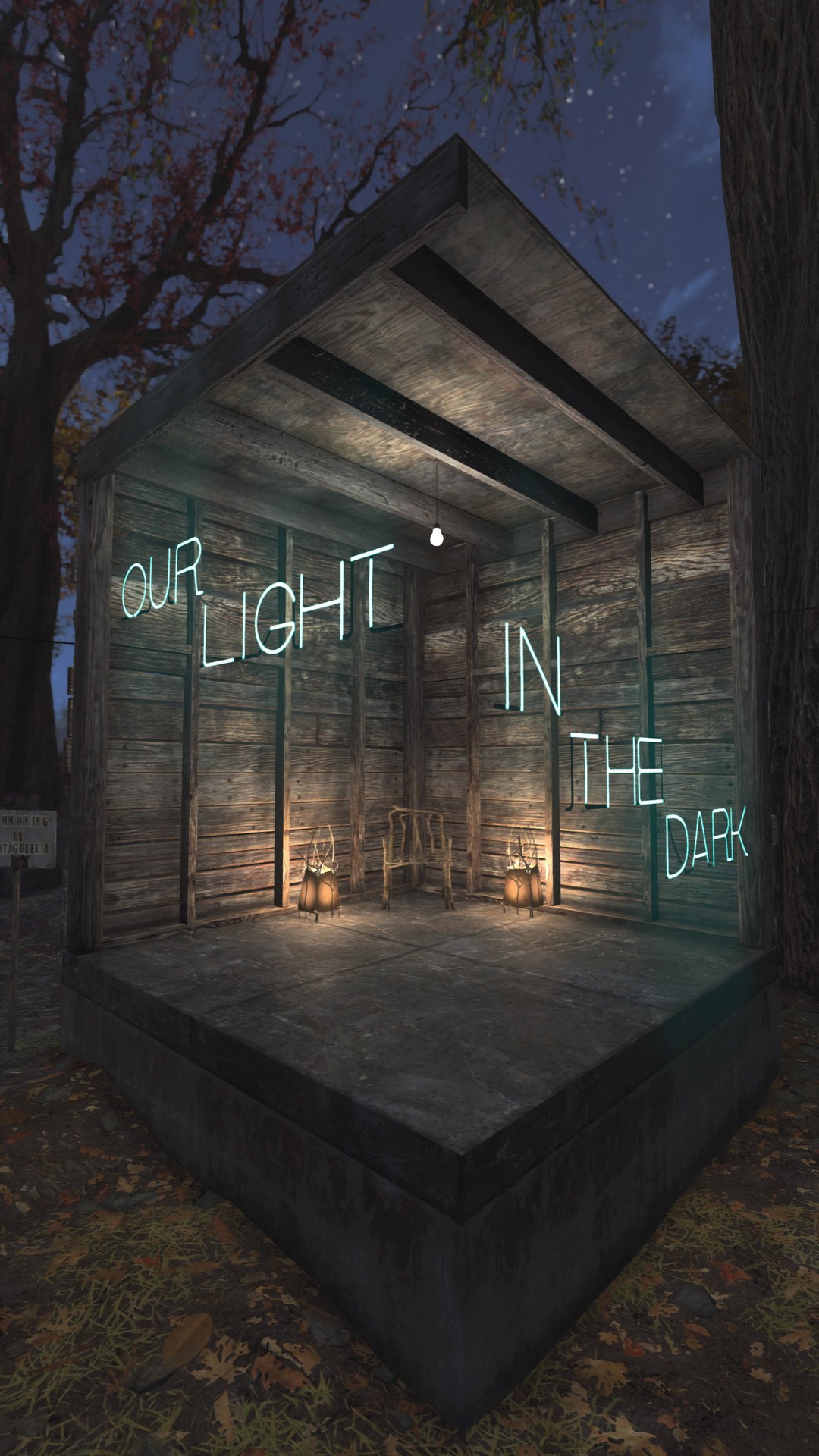 This exhibit was created by a player called "Pantagruelia", who, if you hadn’t already guessed, is a visual artist in real life. Unlike every other player who worked on 1x1x76, she makes art for a living, and she pulled out all the stops. No one at the show had seen neon lights floating in the air like this until she did it. Although, I have to say that the work becomes slightly less appealing when you know about the inspiration behind it: Mothman.

You might be thinking that the simple fact that a cryptid inspired this exhibit is nothing to shy away from. Well, "Pantagruelia" added context.

“I’ve always been fascinated by cryptids and the legend of Mothman, and this project gave me an opportunity to make something specifically for Him. For the piece, I wanted to make a space where one could go to sit and contemplate upon His wisdom or offer oneself to Him. Praise Mothman, our Light in the Dark.”

I was a tad shaken.

Moving swiftly on to another exhibit, I got talking to "Wastelanddude", another player who enjoys The Bunnyhood’s mentality. His work was inspired by something I could get on board with.

"When I first looked at the empty space my immediate thought was a bathroom," he said. "I rarely see a bathroom built in anyone’s camp I visit. It may be a post apocalyptic world but nature still calls.” 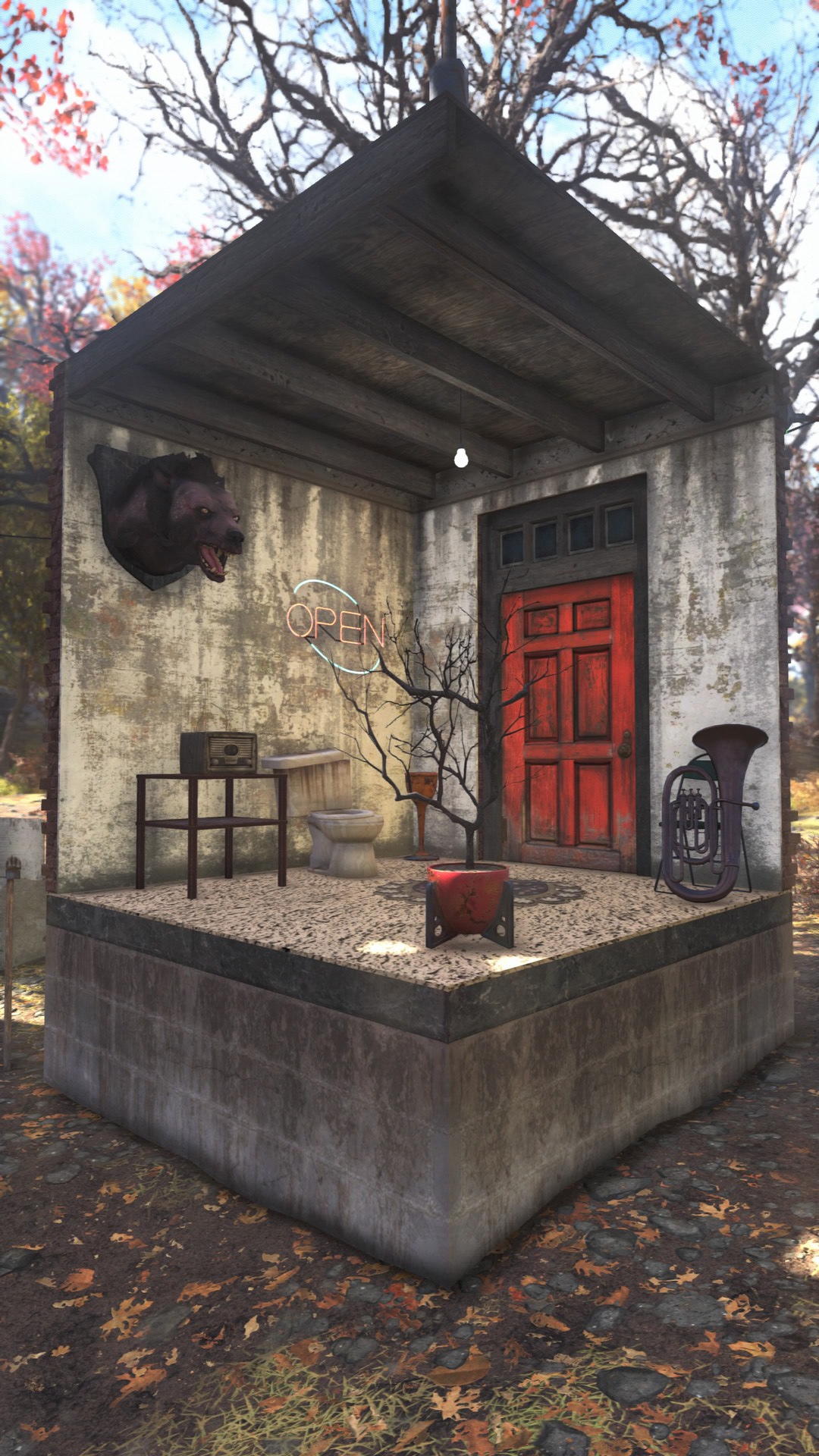 With this in mind, I took a longer look at his exhibit. A toilet, radio, plant, and even wall decorations are things I can understand needing to be in a bathroom. But when I saw the tuba I was a little confused. Until I remembered bathroom acoustics. Who hasn’t sung in the shower? "Wastelanddude", however, had a different, slightly unexpected inspiration.

“When you’re trying to find and execute the mysterious 'brown note' what better place to be in case you actually figure it out.”

Coming towards the end of the exhibits, I found a piece by "Derby322", and was expecting to have a deep conversation about how prevalent fast food is in our culture today.

“The inspiration for my piece was as simple as the title, ‘Munchies’.” 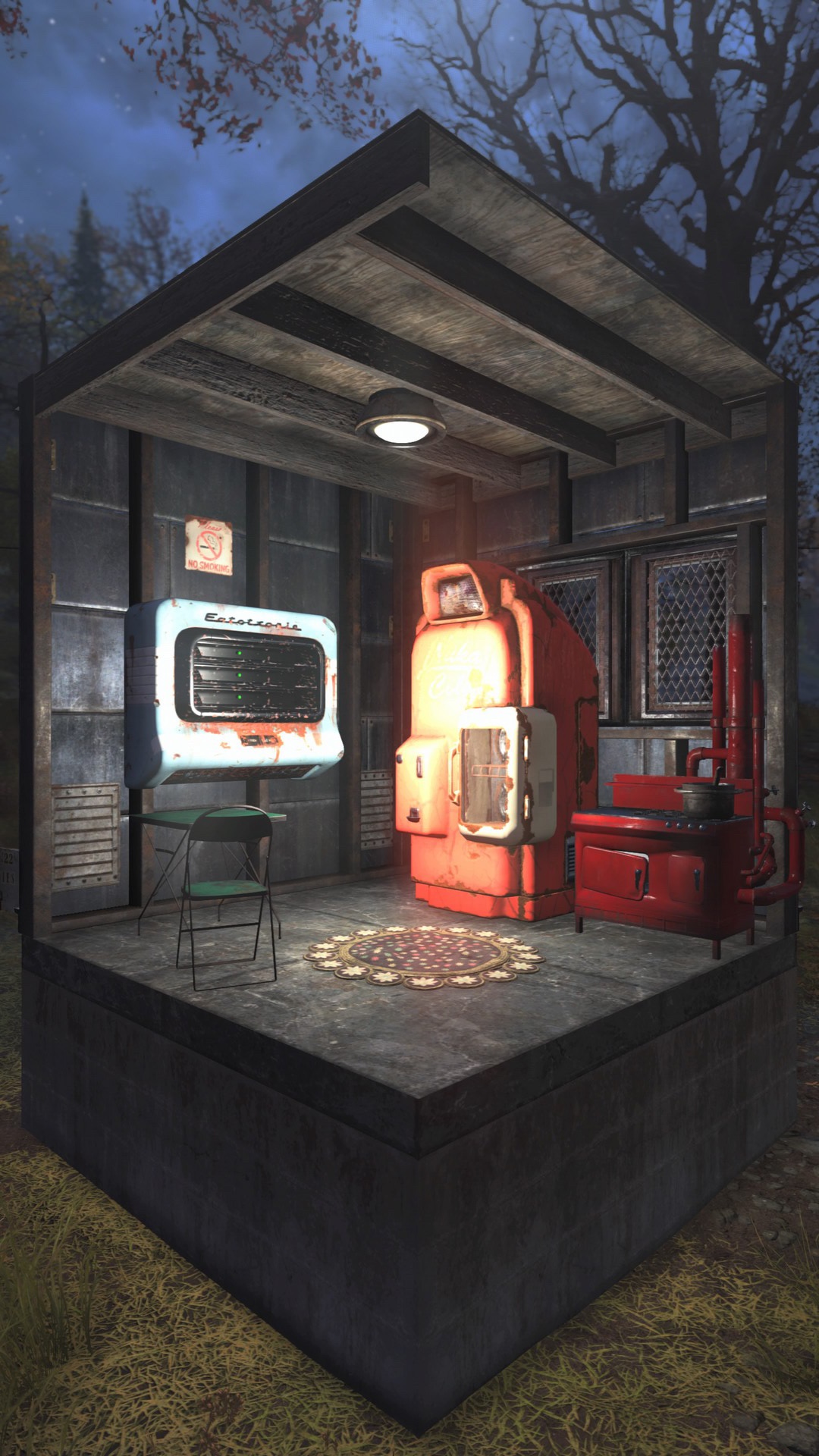 His creative process is fairly straightforward.

“I was going through all the plans and found the food vendor stuff. Before I knew it, I had a kitchen!”

The curator, "Appalachia Howie", told me that he knew CAMP budget would be an issue with this project. Fallout 76 only allows for players to build a certain number of items in any one CAMP, and each item has a percentage of space that it fills. This exhibit by "Wilwonka" was the moment CAMP budget became the biggest limitation. 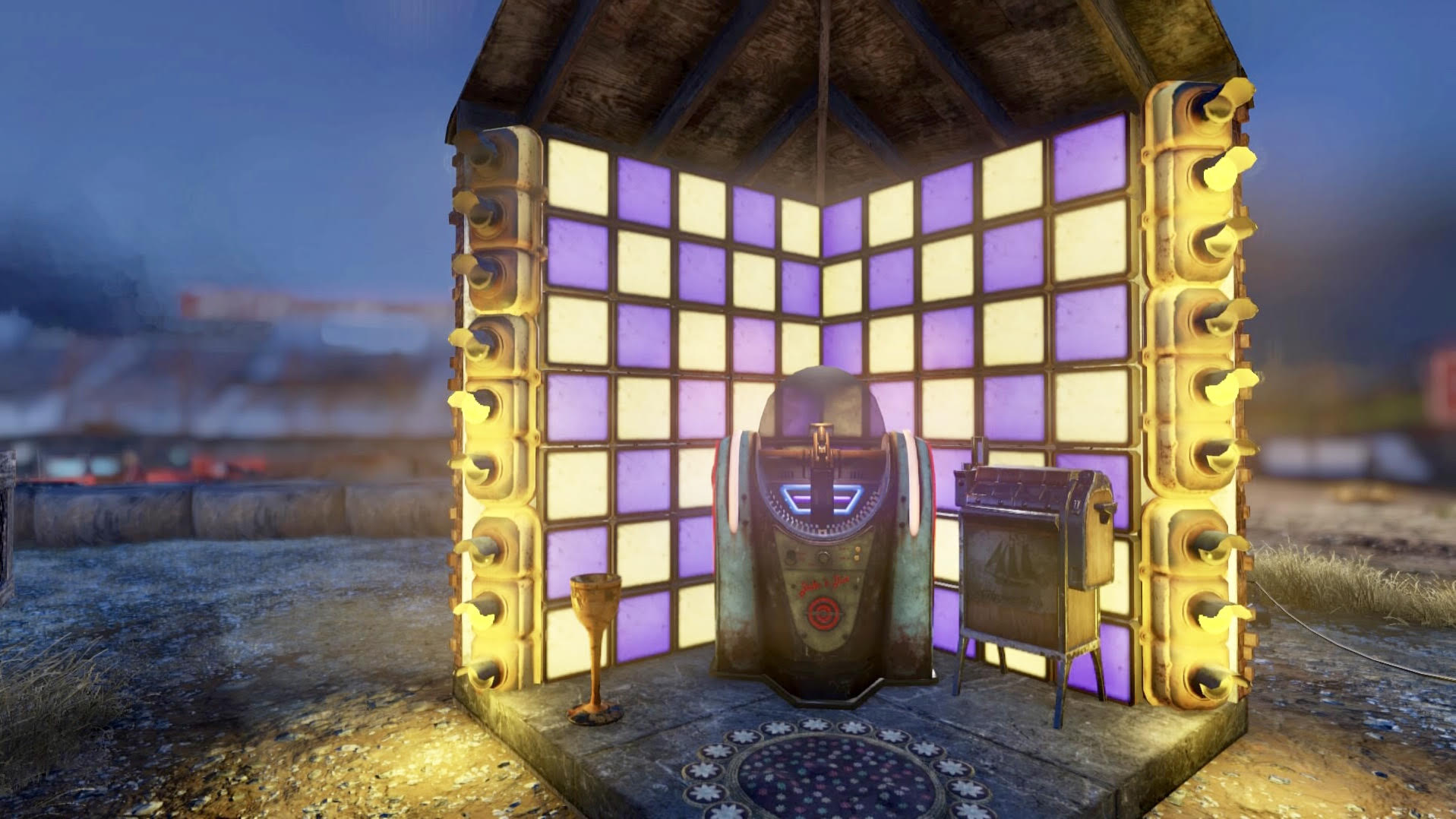 The above light show is the result of three days worth of hard labour. Each cube had to be placed individually, and the lights programmed to be a colour or flash on and off. Some parts might be Atomic Shop items, and take up more space as a result. Unfortunately, the aforementioned CAMP budget was close to being full. So "Wilwonka" scrapped this and ended up submitting the exhibit below, which was far less resource-intensive.

“The square that I ended up submitting was inspired by a pet peeve of mine, and many others, leaving the doors open at camps.” 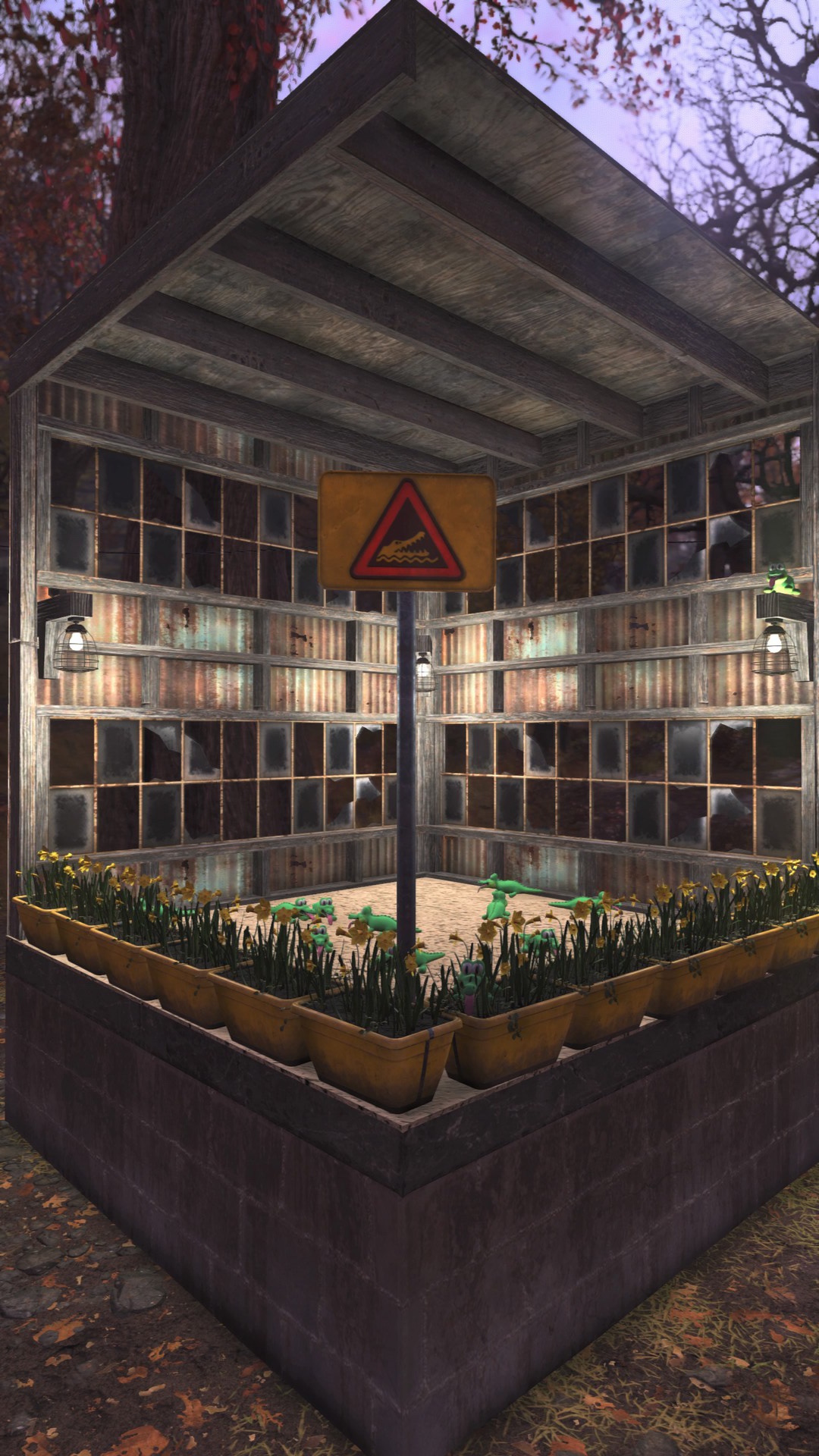 When he elaborated, "Wilwonka" said that he’d once come to a CAMP where every door was wide open, even the bathroom door.

“Why are you opening that door? What do you think I’m hiding in the toilet?”

Probably a nice tuba. Looking at the final exhibit in 1x1x76, I couldn’t quite get my head around what I was looking at. This exhibit, from "RealPapertattoo", has a lot going on, with multiple clocks on the walls, each telling a different time. When you add in the intensity of the forlorn lawn chair and television blaring static at you, things seem to take a darker turn.

“There was a period of time in my early 20's (I'm 35 now) where I was pretty deep in addiction and isolation.”

This is the inspiration for his exhibit. A gritty interpretation of a harsh, real life.

“I was living in a hole with a lawn chair and beer cooler.” 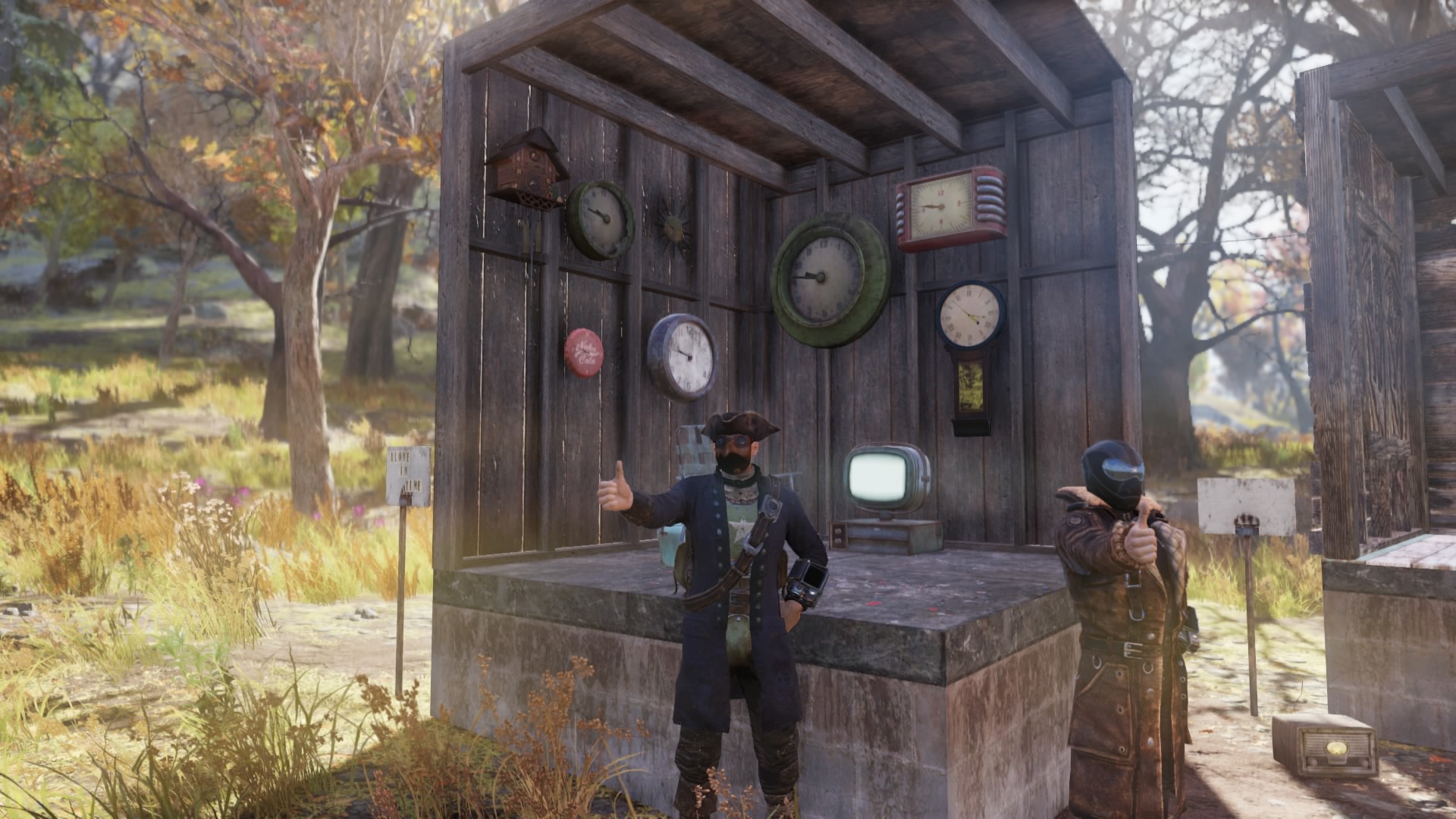 The 1x1x76 art show is characteristic of communities like The Bunnyhood. They take a game and go as far as they possibly can with it. I wonder if Todd Howard ever imagined that the base-building mechanic, brought over from Fallout 4, would ever be used for something like this. Howie the curator added a few final touches to the show - a couple of benches, some flowers, and some classical music - and finally decided the project was finished. By the time it was complete, he told me he had nothing left, not even a bed. 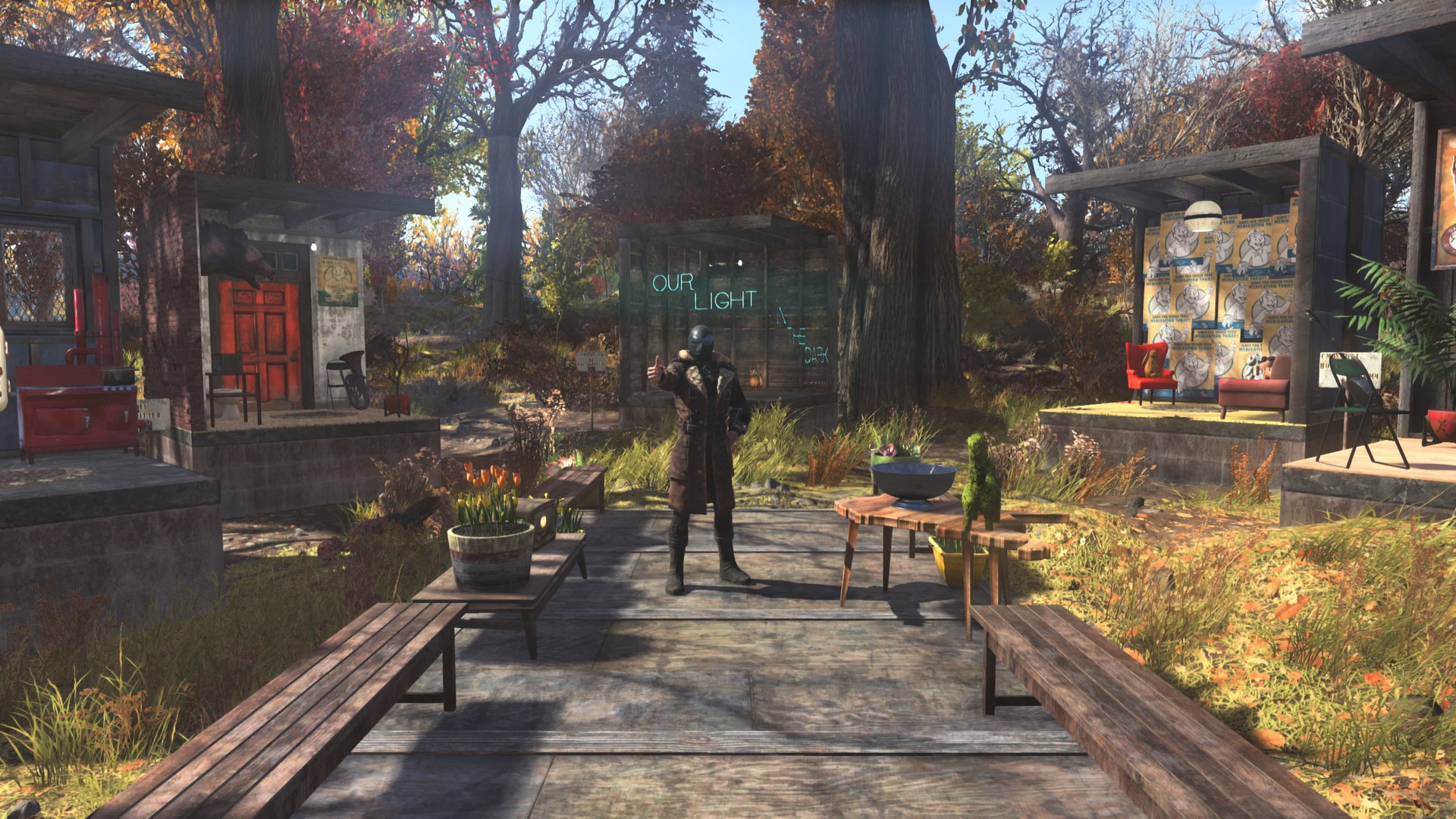 “I feel that we embodied what this game is about.”