Pinned by the potent magic of the P key, Edward, the Flare Path Sky Tours Learjet, has spent the past week motionless above IJmuiden, a port halfway along the forward edge of the giant rotting plesiosaur flipper that is the Dutch coast. In a few seconds' time I'll be unpinning him so our Aerofly FS2 strand-ramble can continue. Read on for naval calamities, nocturnal massacres, nuclear near-things, and other cheering tales. 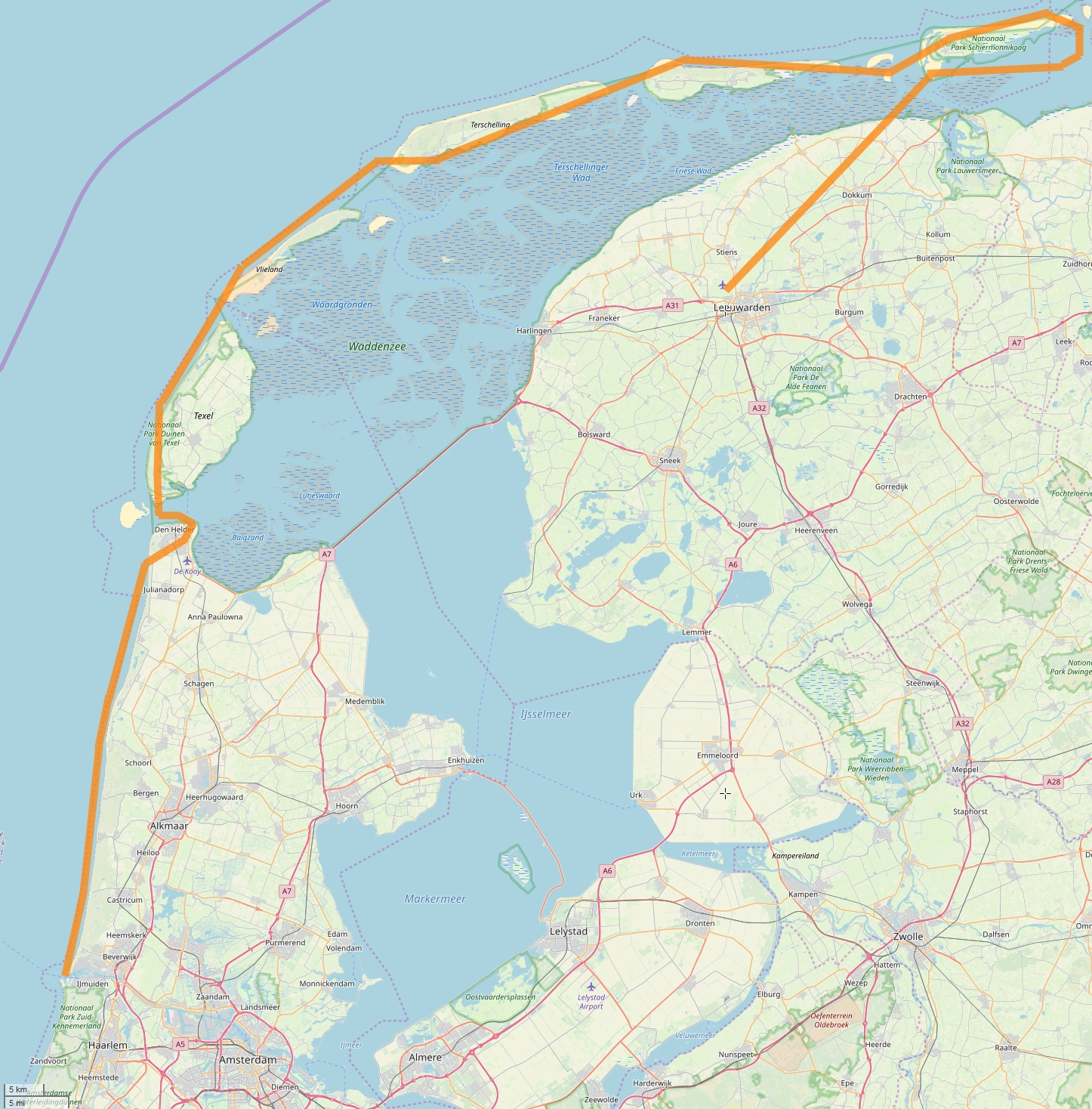 Passing Castricum, that raft of rooftops over yonder, without mentioning its association with the Grand Old Duke of York of nursery rhyme fame would be seriously remiss. At the head of a 25,000-man Anglo-Russian invasion force that was hoping to wrest Holland from Revolutionary France, the Duke enjoyed early successes at Bergen, Callantsoog, and Den Helder - coastal locations we'll be overflying shortly - but failed to prevail in a close, to-and-fro tussle here on October 6, 1799. The defeat convinced him that the invasion had little chance of success and, after an orderly withdrawal permitted by a gracious opponent, he set sail for Blighty. 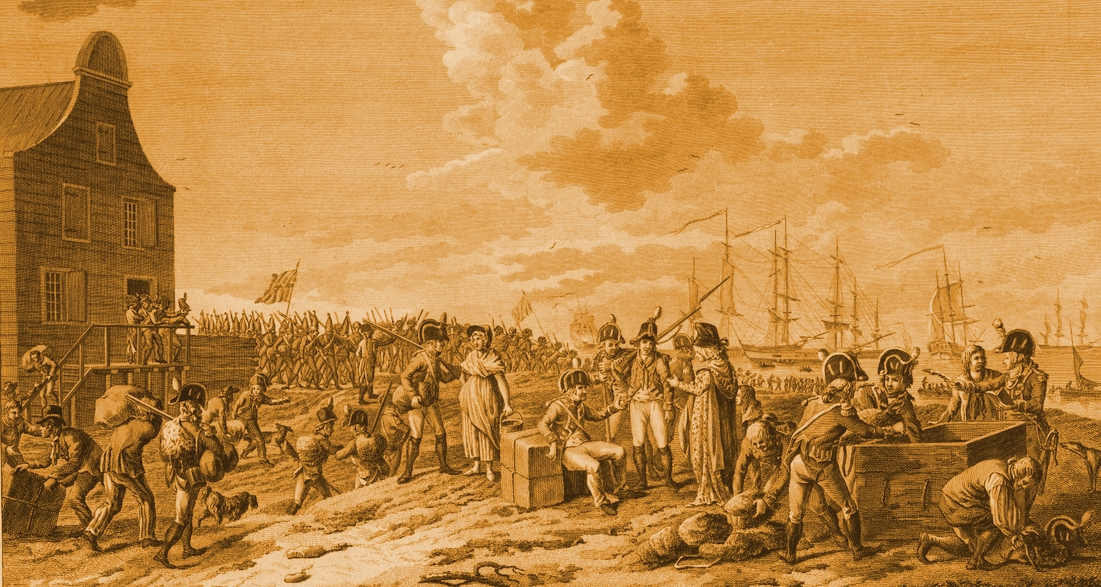 Surprisingly, this naturally balanced campaign has yet to inspire a computer wargame. I'm convinced it would make a great Wars Across the World module.

Edward may have spent the past seven days in suspended animation but the scenery beneath him hasn't slept. Look to starboard and you'll see one of the 47 bespoke lighthouse models added to TrueEarth Netherlands during the past week! The J.C.J. van Speijk Lighthouse in Egmond aan Zee is both a shipwreck preventer and a memorial to a Dutch hero. During the Belgian Revolution of 1830-31, Jan van Speyk chose to atomise himself and his crew rather than let his gunboat fall into the hands of “infamous Brabanders”. The history books fail to record whether he consulted his men before discharging his pistol into a barrel of gunpowder. 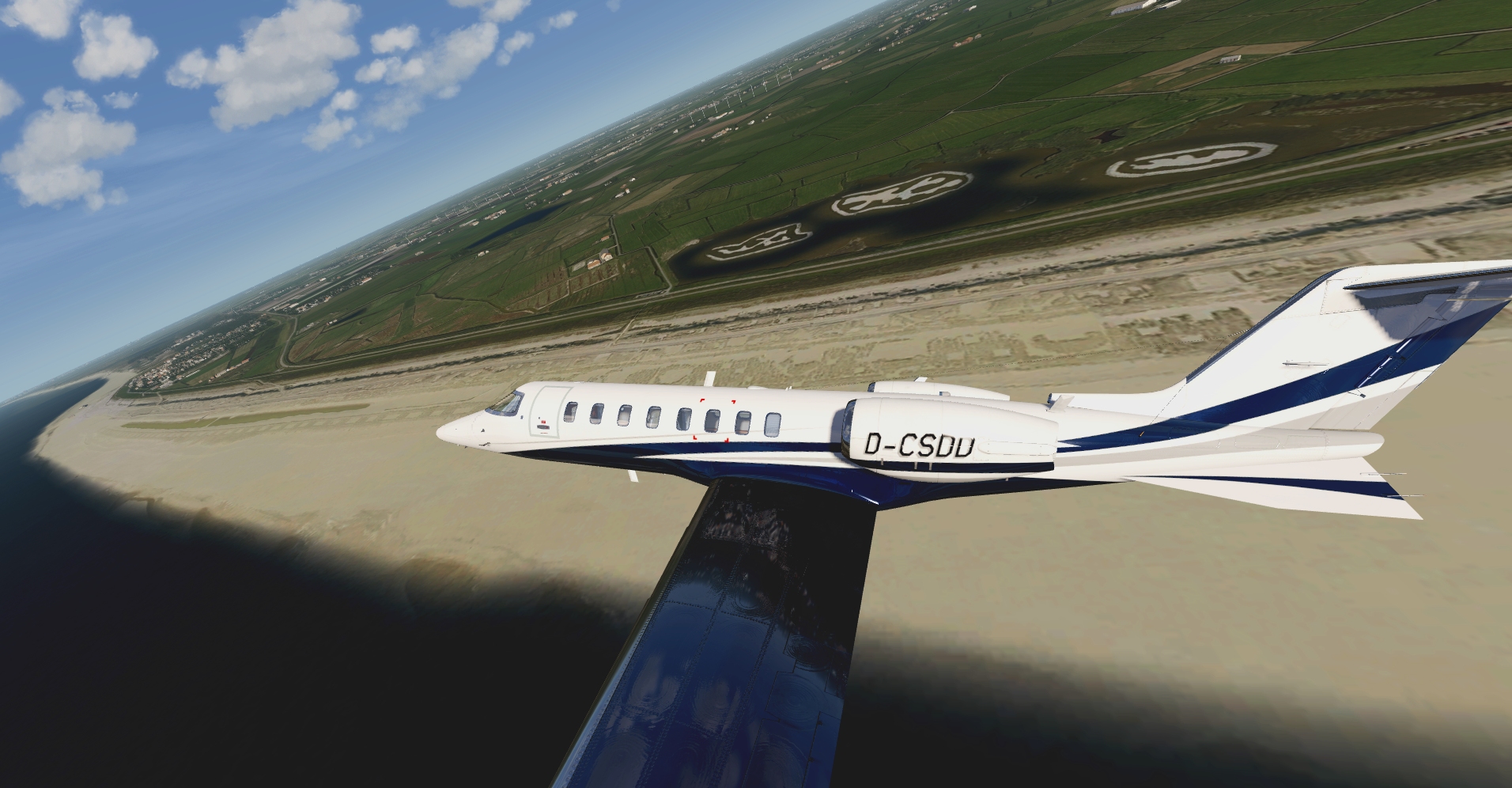 That pine-topped pimple at three o'clock is the 55-metre high Klimduin, the Netherlands' loftiest sand dune. In a moment we'll be passing a beach where the barnacled bones of a Dardanelles veteran rust in peace. Like a number of worn-out warships, the HMS Prince George chose to expire amongst wild beauty rather than industrial ugliness. She parted company with her tugs in September 1921 whilest en route to a German scrapyard and finished up on the sands close to that lake with the oddly shaped islands. 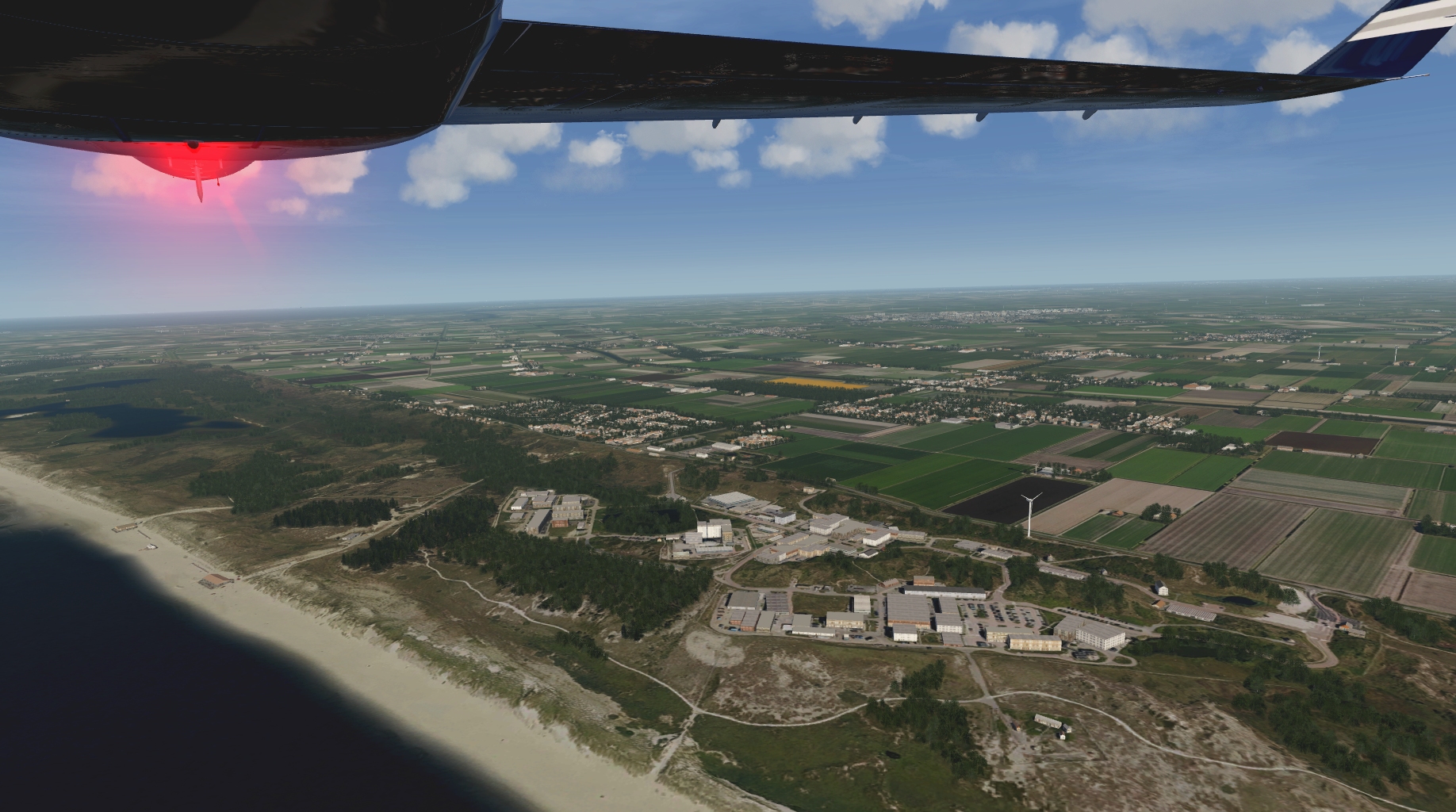 A sprat in nuclear power generation terms (we passed the country's sole atomic power station shortly after take-off), the Netherlands is a whale in another area of nuclear science. If you're European and have ever had radiotherapy, or been injected with a medical isotope prior to a scan, there's a good chance the radioactive material involved was produced at Petten, that unassuming facility over there.

Eighteen years ago a power cut and a missing torch almost caused a catastrophe at the world's busiest medical isotope manufactory:

“On a winter night in December, 2001 there was a power failure in North Holland, where Petten is located. The nuclear reactor is a research reactor, not a power reactor; it needs electricity to operate, for instance to pump cooling water. The reactor has a back-up cooling system to prevent meltdown of the core in case of a power failure. But this evening the back-up cooling system failed to come into action and the operators did not know what to do. There is an extra safety system by convection cooling for which the operators had to open a valve, but the control room was dark. When they reached for a torch that should have been there, it had been taken away by a colleague to work under his car. Trying their luck the operators put the valve of the convection cooling in what they thought was the 'open' position. But then the lights came back on and the operators discovered they had actually closed the back-up convection cooling system. Had the power failure lasted longer it would have meant meltdown and a major disaster.” 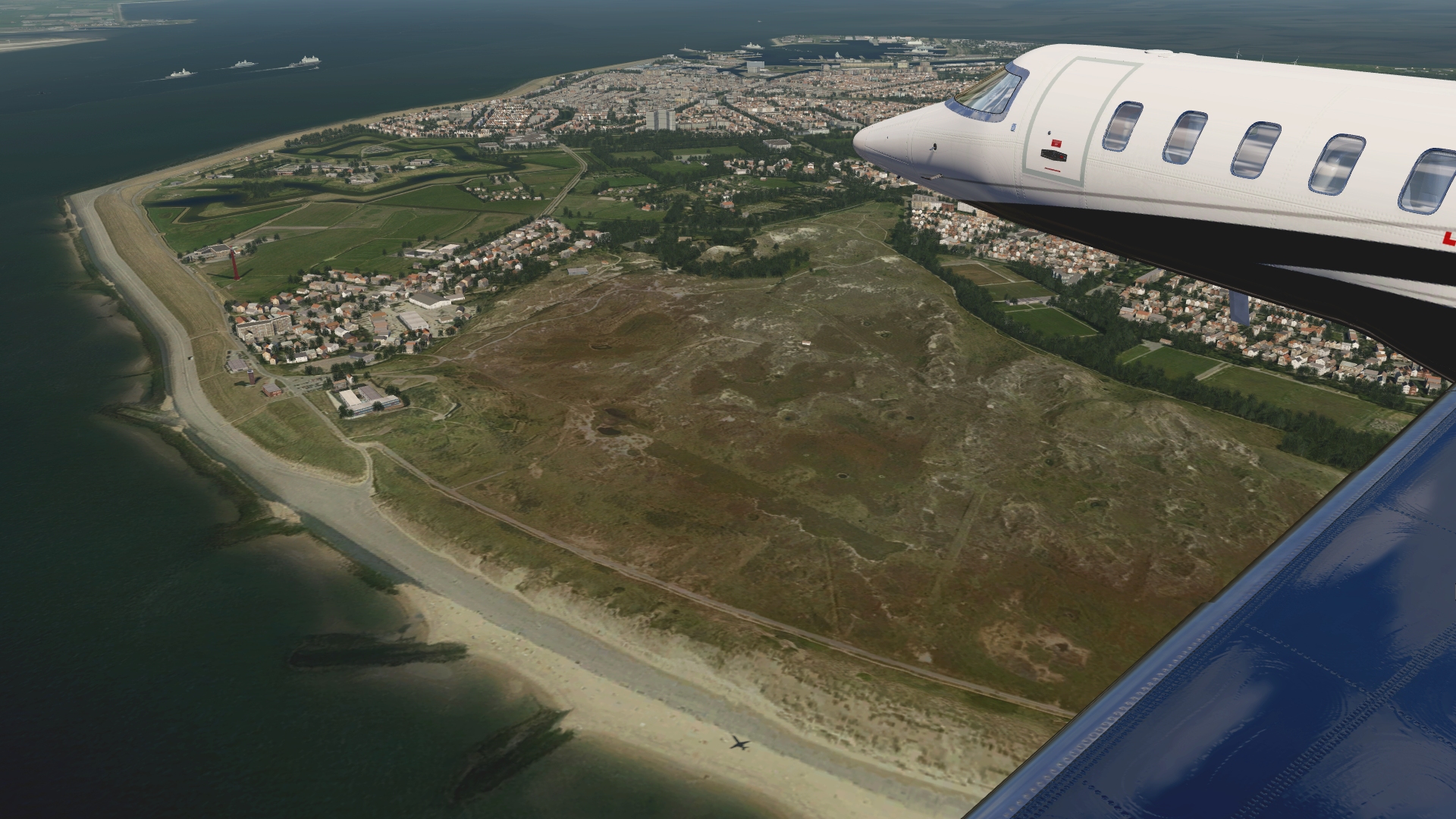 Dominating the approach to Den Helder, our jumping off point for the Frisian Islands, is the slender crimson digit of Lange Jaap, regarded by some as the world's tallest traditional lighthouse, and the spiky footprint of Fort Erfprins, a Napoleonic stronghold. Neither structure is old enough to remember one of Europe's strangest battles. 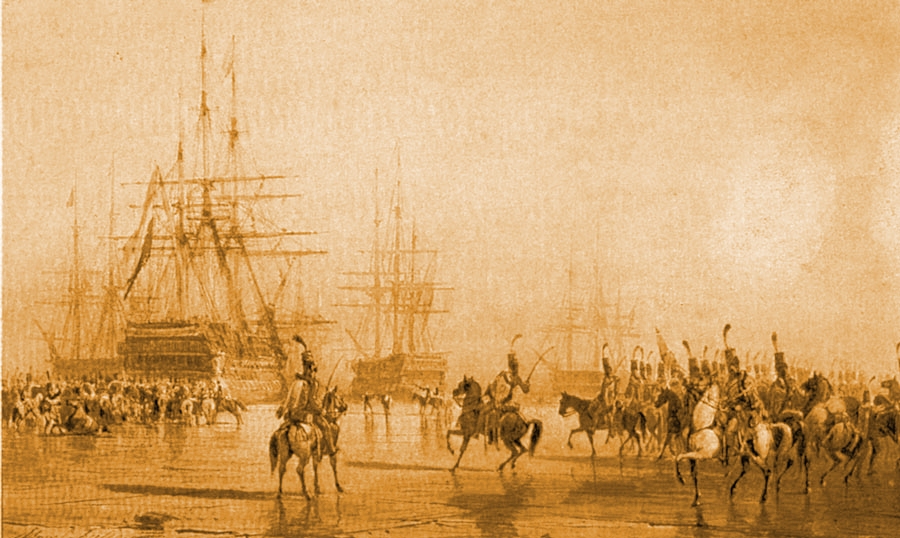 In 1795 fourteen Dutch warships were captured by a force of French cavalry in the waters off Den Helder. The unlikely victory didn't involve rafts, snorkels, or water-wings. The vessels were held fast in the frozen Zuiderzee when the hussars pounced. 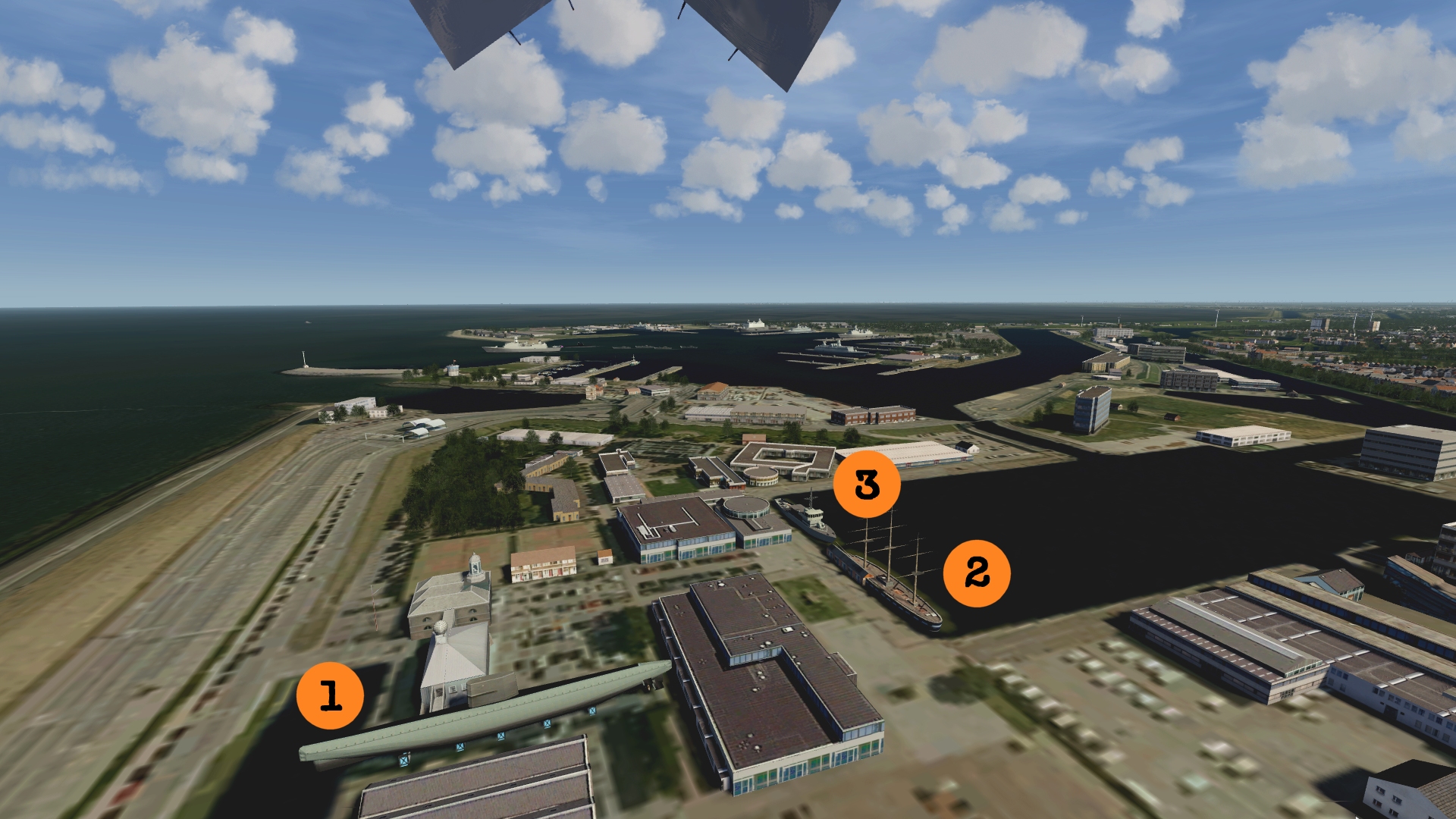 We can't visit Den Helder without admiring its extensive naval base and bevy of museum ships. Amongst the Dutch Navy Museum's larger exhibits are (1) a Cold War diesel submarine (HNLMS Tonijn), (2) a Victorian ironclad with a battering ram for a bow (HNLMS Schorpioen), and (3) a minesweeper that survived WW2 by disguising itself as an island (HNLMS Abraham Crijnssen). 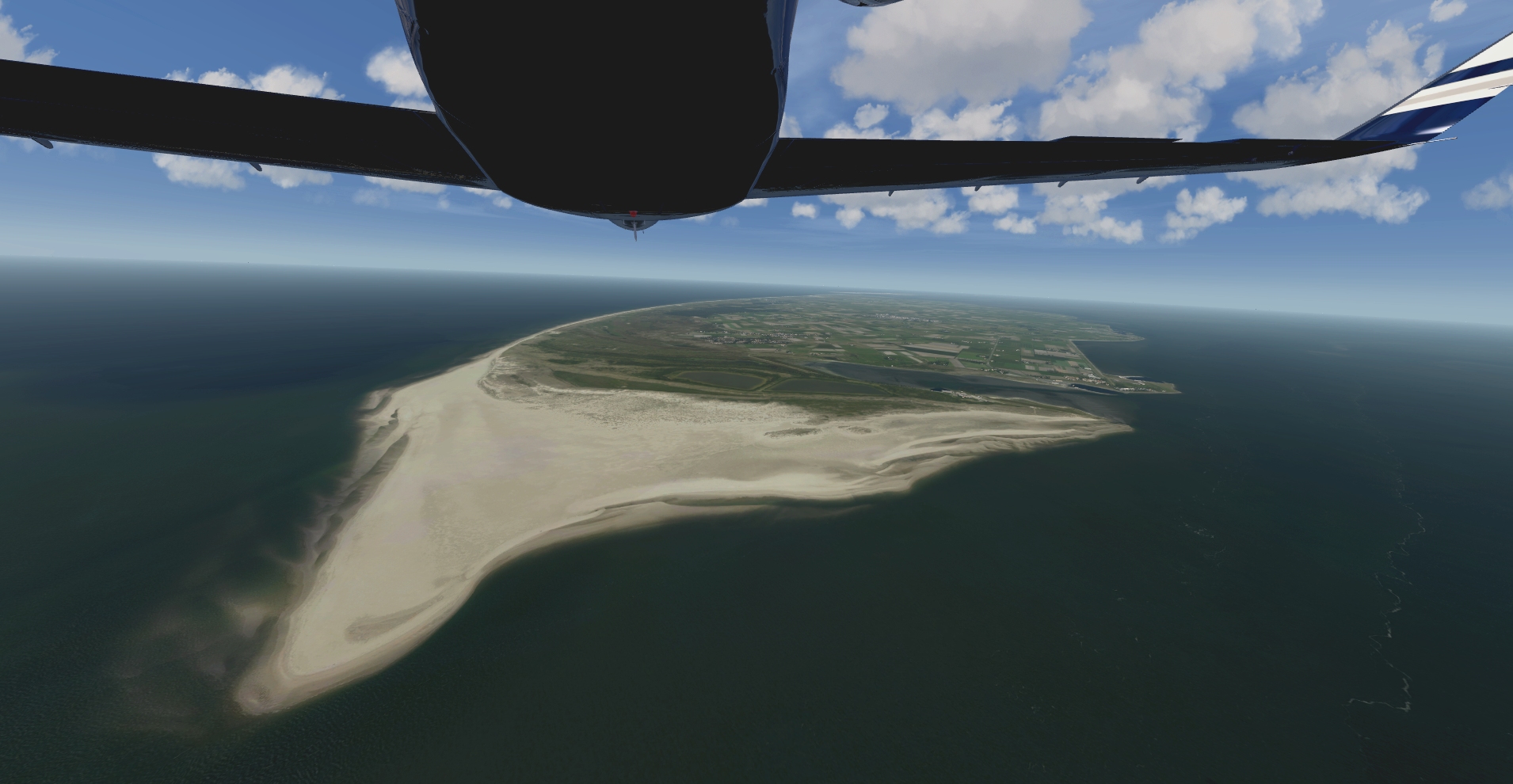 I've asked Roman to orbit Texel a few times rather than fly straight over it. The largest and most westerly of the Frisian Islands might be thinly populated (13,641) but it positively heaves with history. 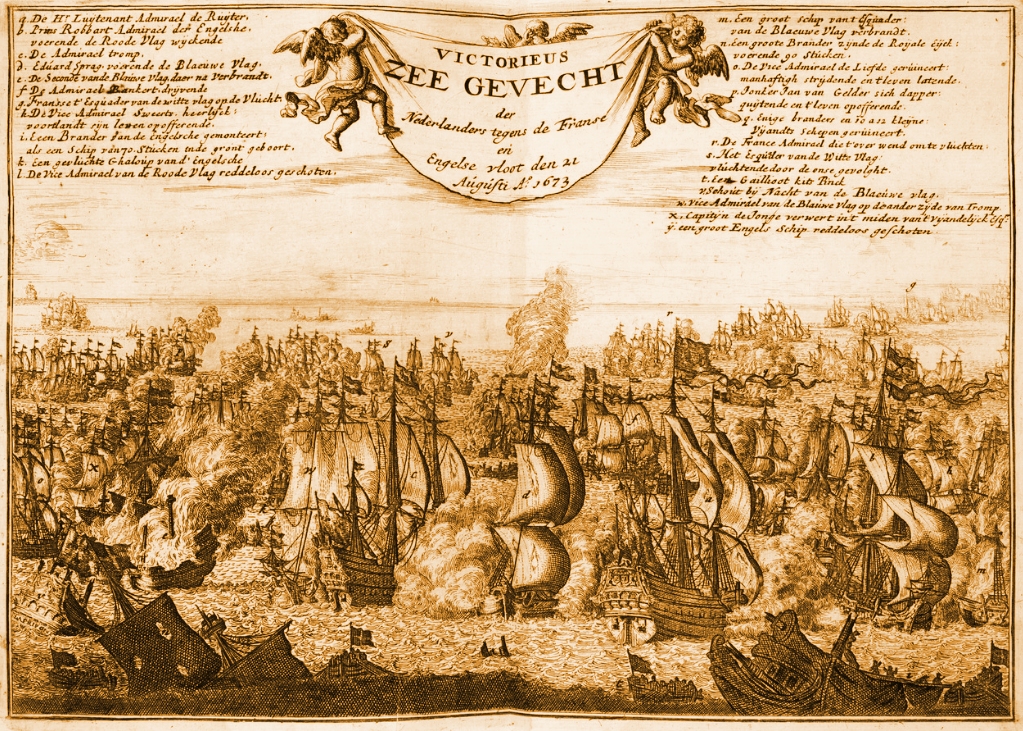 In 1673 sizeable Anglo-French and Dutch fleets traded cannonballs and fireships close to the island. Although militarily inconclusive, the Battle of Texel cost three thousand seafarers their lives.

Have you seen Kajaki, the movie about British troops in Afghanistan who blunder into an unmarked minefield? On an August night in 1940 not far from here, something similar happened to a Royal Navy destroyer flotilla investigating reports of a possible invasion fleet making for England. Grievous damage to HMS Express sparked a series of plucky but foolish rescue attempts in which a further two RN destroyers, Esk and Ivanhoe, detonated mines. By the end of a debacle destined to go down in history as The Texel Disaster, two ships were on the seabed and 300 sailors were lifeless playthings of the tides. 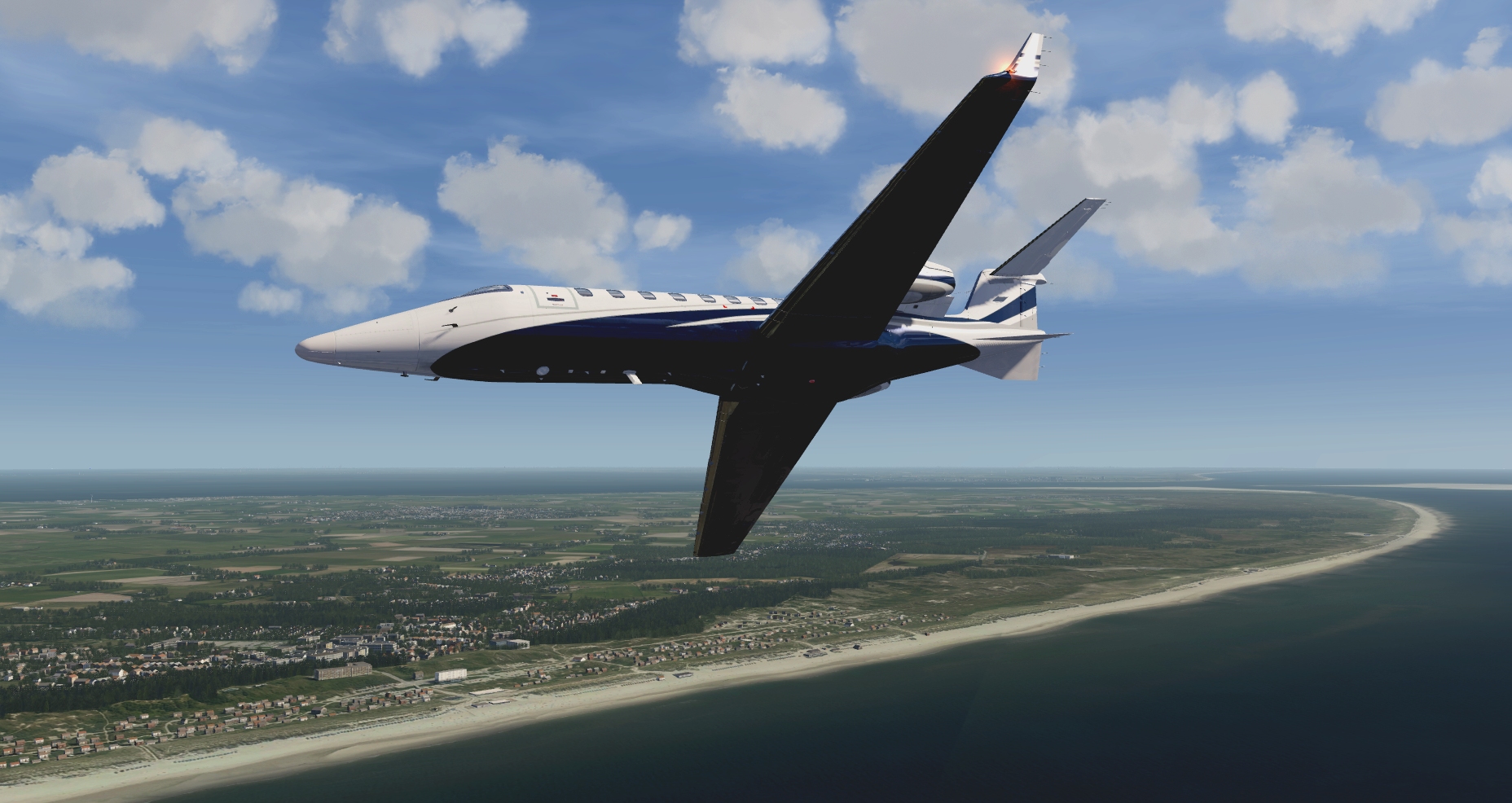 Before we turn to less morbid matters I must mention the grim events that occurred on Texel in April/May, 1945. As WW2 was drawing to a close, a contingent of 800 Georgian soldiers based here decided to switch sides. This was no pragmatic/peaceable volte-face. Most of the 400 or so German troops the Georgians shared the island with were slain in their sleep with knives and bayonets. Anticipating an Allied push that, as in Warsaw the previous year, never came, the rebels and their friends in the Dutch resistance soon found themselves facing a determined counterattack. 2000 Kriegsmarine marines arrived from the mainland and over the next five weeks, the uprising was ruthlessly crushed. VE Day and the German surrender (May 7) failed to stop the blood-letting. It took a Canadian landing on May 20 to do that. 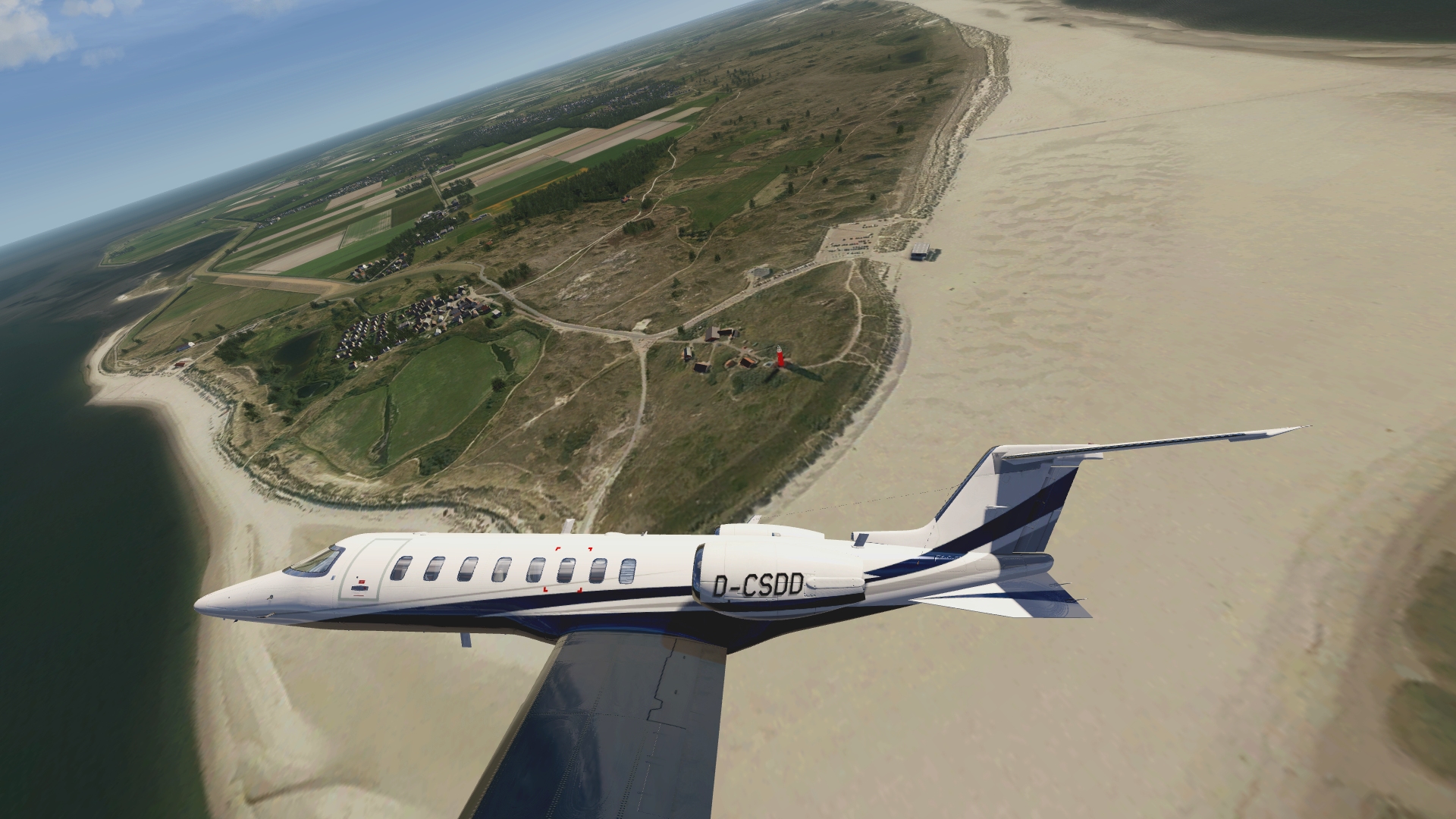 That's Eierland lighthouse. Heavily damaged during the uprising, it was one of the last buildings held by the mutineers. 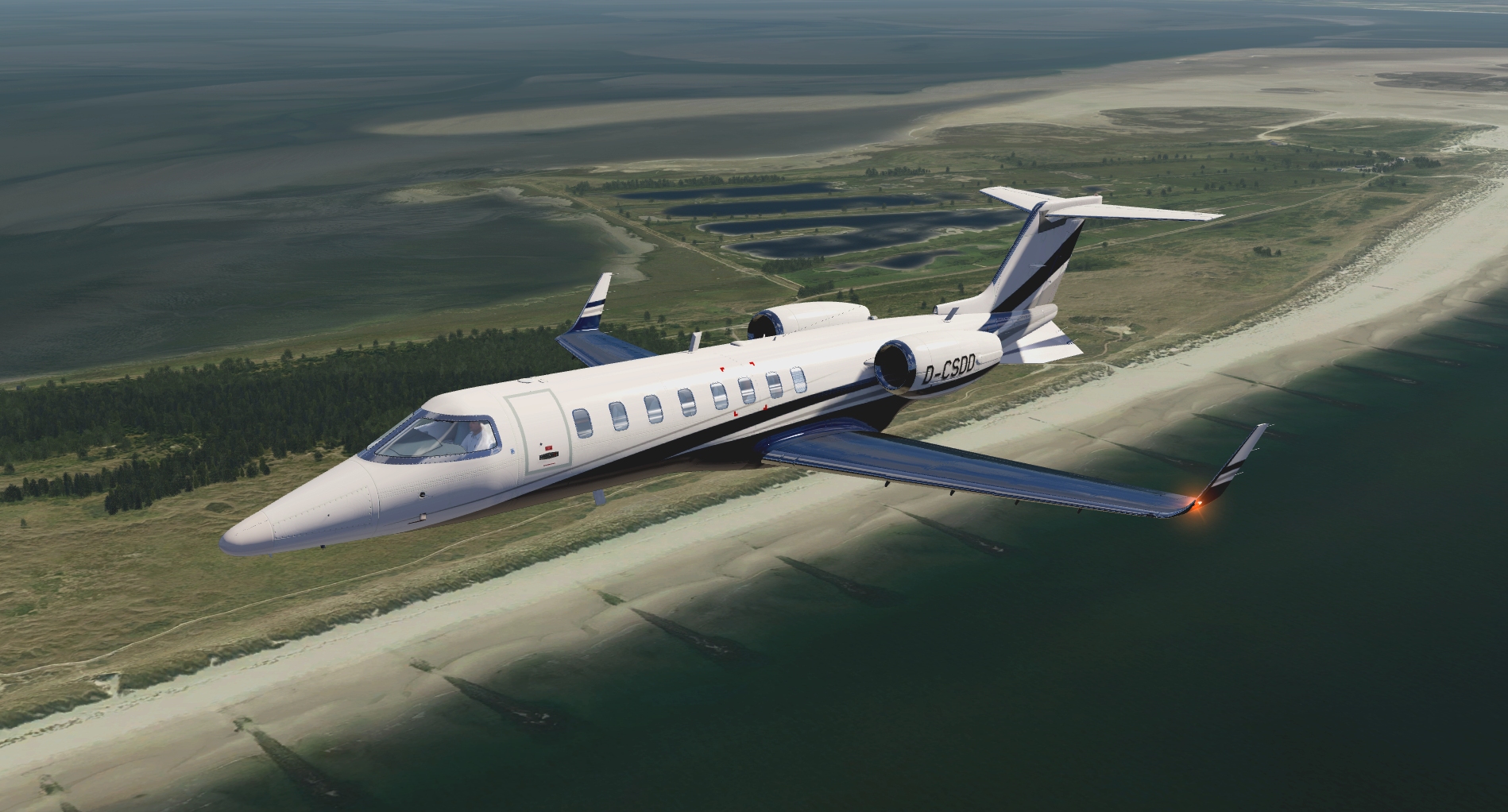 Vlieland is the next island on our itinerary. A great place to watch seals and birds of the sea and shore,  like Texel, Terschelling, Ameland, and Schiermonnikoog, it hit the headlines earlier this year when all manner of strange objects started washing up on its beaches. The slick of shoes, handbags, TVs and plastic ponies had spilled from 375 shipping containers shed by the Bremerhaven-bound MSC Zoe during bad weather. Although local beaches are now clear of larger items, millions of smaller reminders of the incident remain.

A little more bank if you please, Roman. 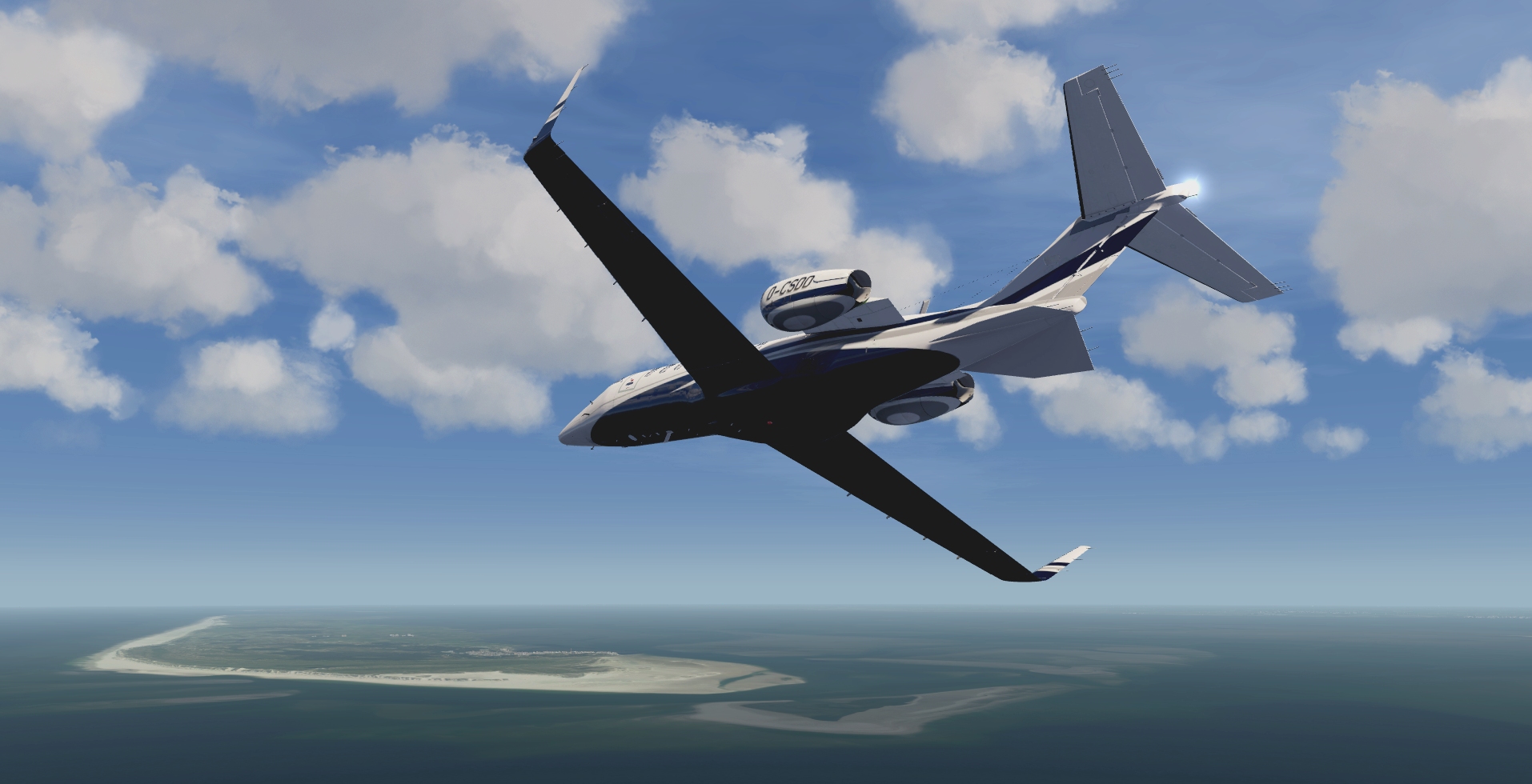 One of the world's most famous bells spent 59 years buried in seabed mud just down there. When, in 1799, HMS Lutine, a French frigate handed over to the Royal Navy after the Siege of Toulon, lodged on a storm-lashed sandbank between the islands of Vlieland and Terschelling, she was carrying 240 souls and an astonishing £116 million (in today's money) in bullion and coin. Only one person made it to shore. The lion's share of the loot remains in the vicinity of the silt-shrouded wreck despite a string of ingenious salvage attempts. 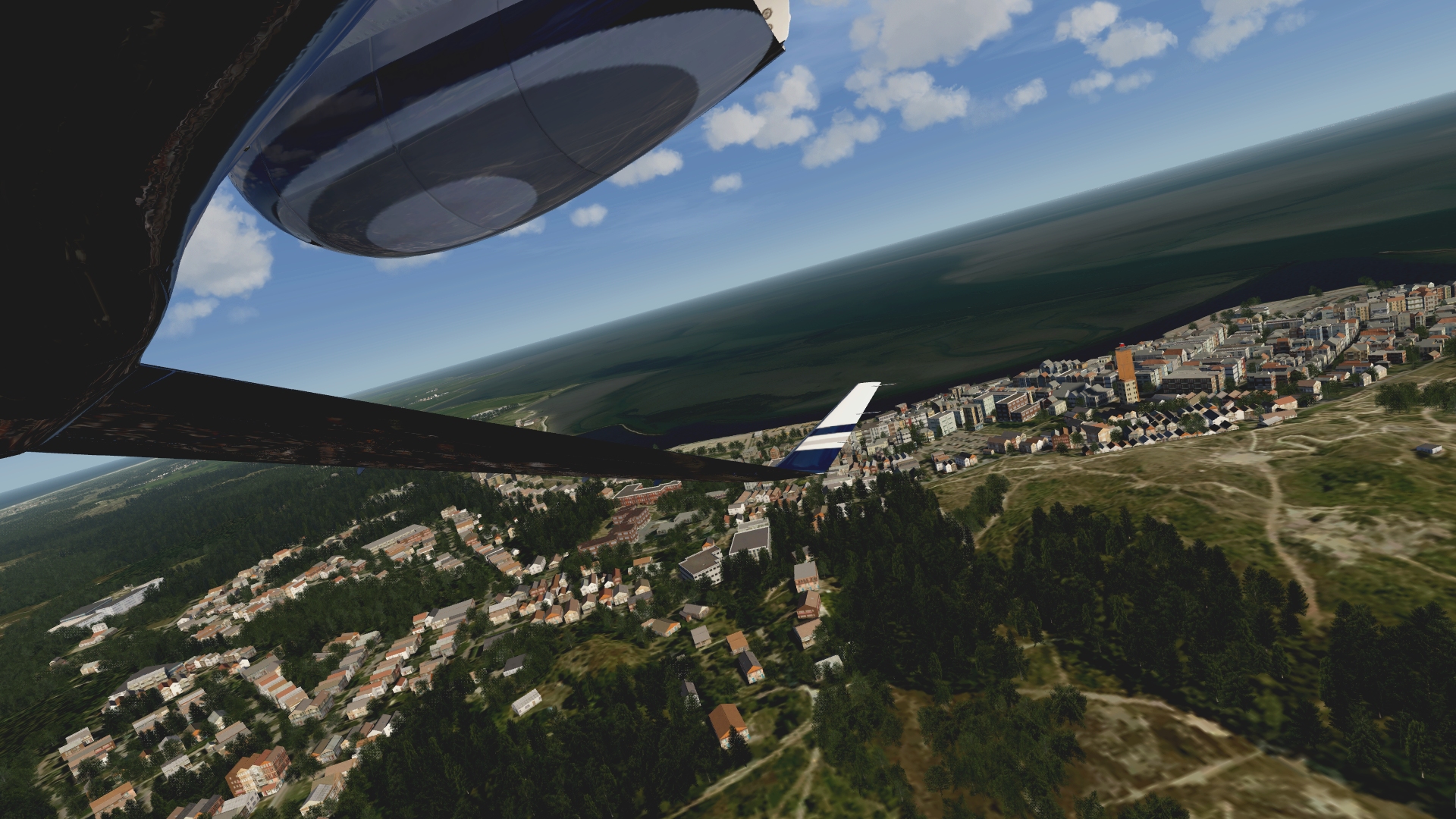 When fire burned the heart out of England's capital in September, 1666, there was a queue of Dutch pamphleteers ready to proclaim it as divine retribution for what the Royal Navy had done in this village the previous month. West-Terschelling, the largest settlement on Terschelling, was torched along with a merchant fleet of 140 vessels by English raiders during the second of three 17th Century Anglo-Dutch conflicts kindled by global trade rivalry. Regarded as excessively destructive by some at the Admiralty, 'Holmes' Bonfires' provoked one of the most brilliant retaliatory raids in military history. 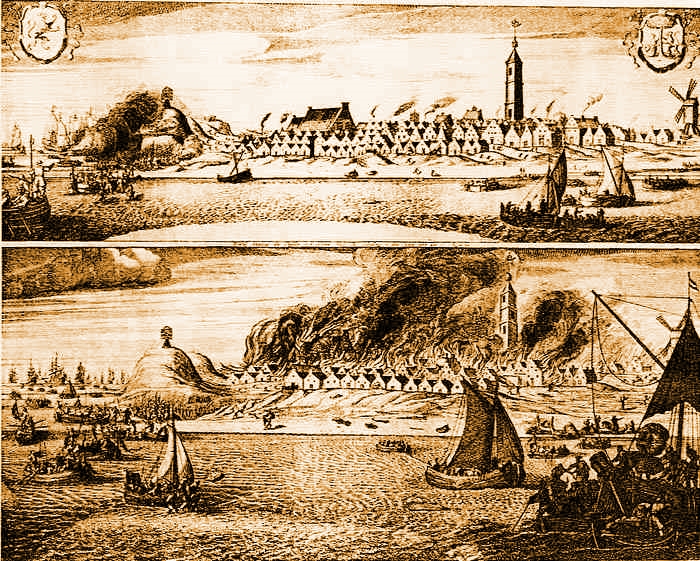 The only West-Terschelling structure to survive the 1666 inferno is now the Netherlands' oldest lighthouse.

Many Terschellingians speak Frisian as well as Dutch. A linguistic Dogger Bank, Frisian is said to be closer to English than any other tongue.

Somehow we've got this far without ogling a single windmill. In theory there should be two on tadpole-shaped Ameland. Let's investigate...

Hmm, De Verwachting (The Expectation) is there, if a little overgrown and impinged. De Phenix, on the other hand, appears to have flown away. 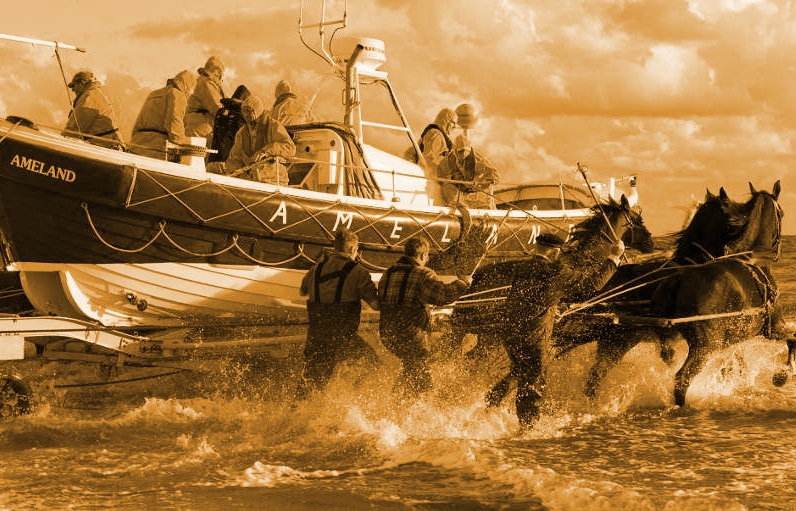 Perhaps the best reason to visit Ameland is its preserved lifeboat. Twelve times a year it's launched with the help of ten sturdy horses – quite a spectacle. Roman and I are planning to return tomorrow evening to catch the second launch of 2019.

Engelsmanplaat, a barren sandbank between Ameland and Schiermonnikoog, boasts just one structure. Amazingly, the currently unsimmed 'rescue house' (a Waddenzee version of a mountain hut) has yet to feature in a horror movie, novel, or game. 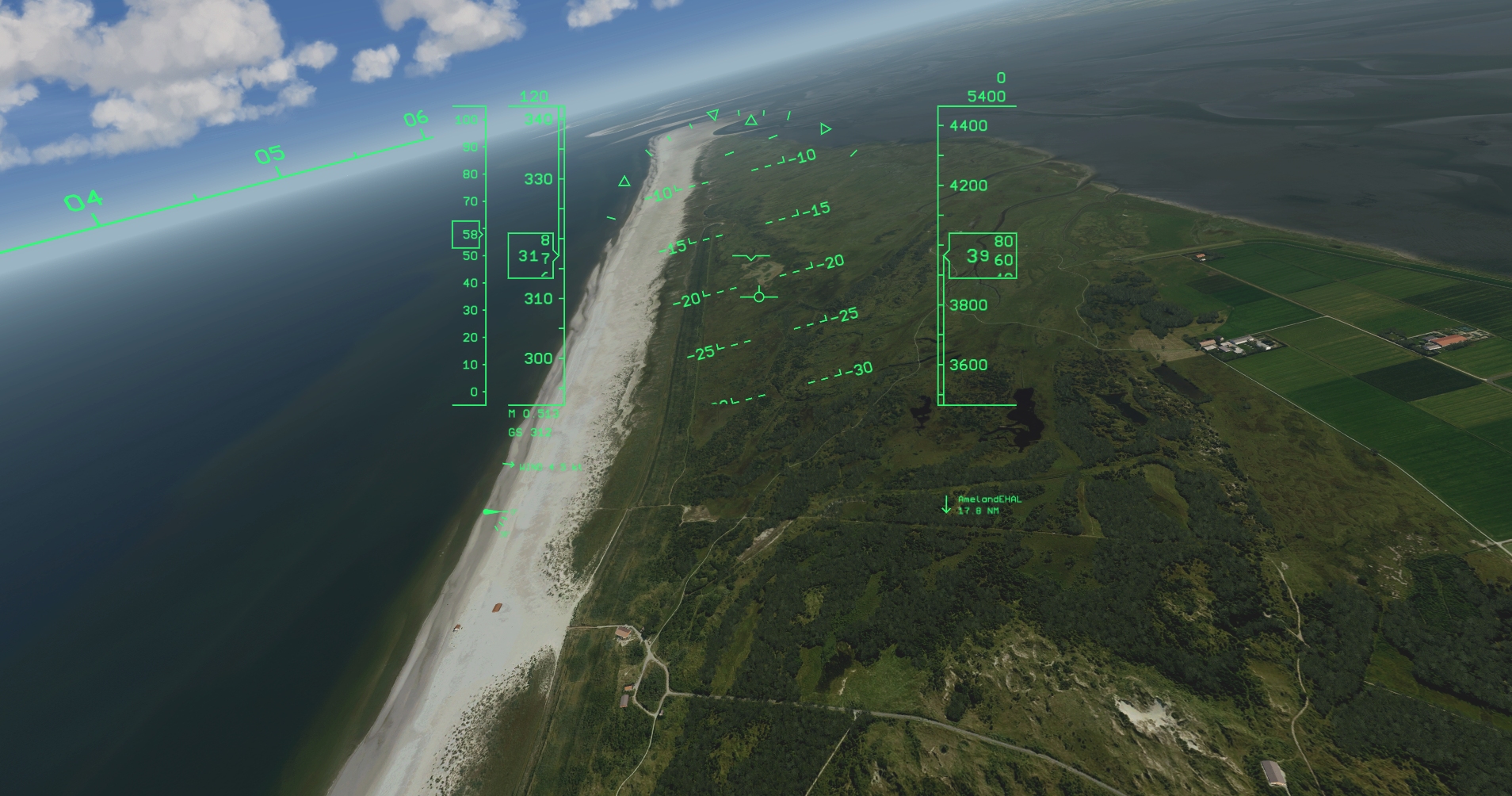 Schiermonnikoog is the last island on our ramble route (I don't want to bother the birds nesting on the uninhabited nubbins of Rottum). It has the dubious distinction of being the last part of Europe liberated during WW2. The vile band of SS and SD die-hards that sought refuge here in the Spring of 1945 didn't surrender until June 11, and, obviously, would figure in that horror flick mentioned above. 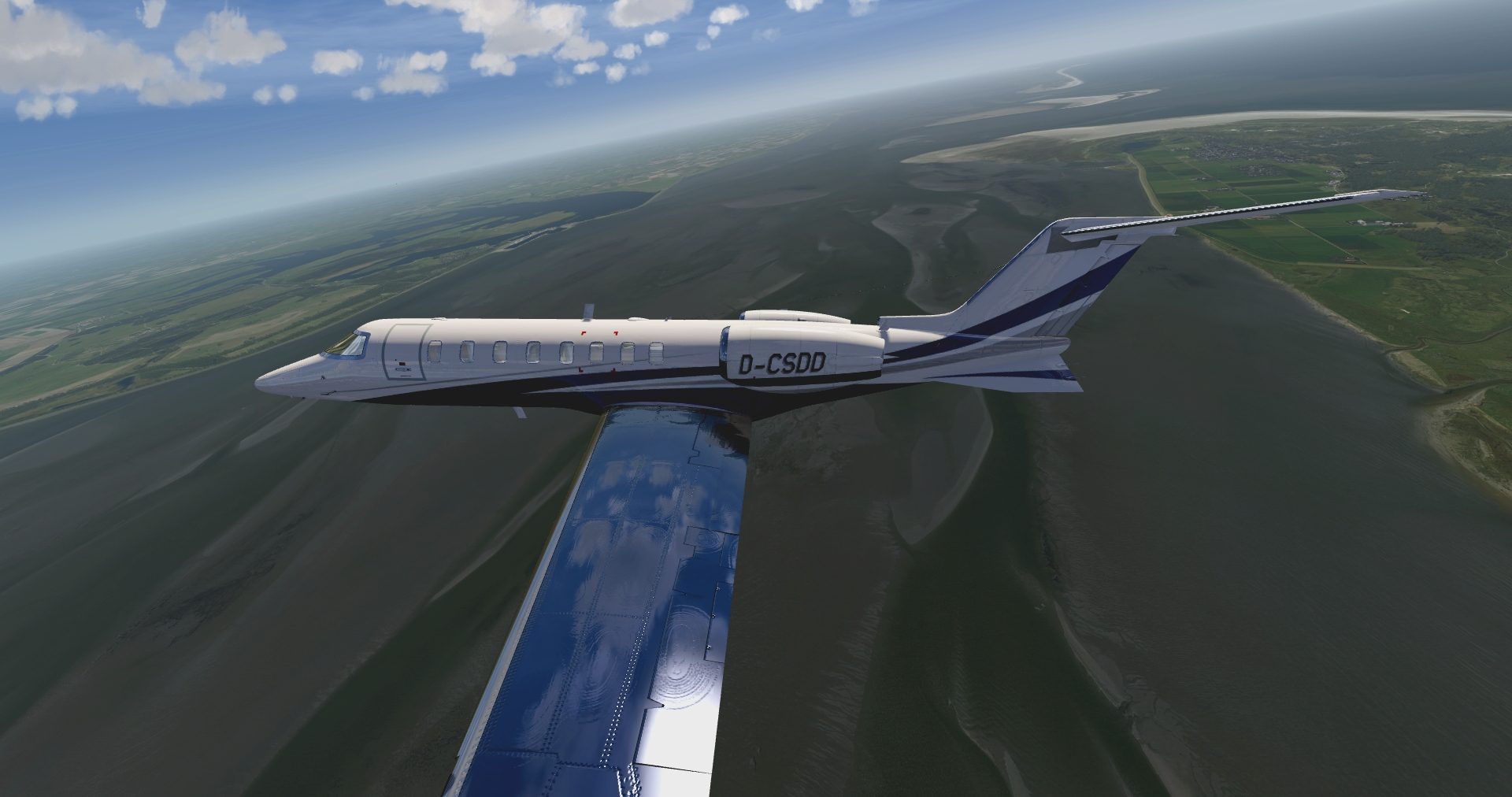 We'll be touching down at Leeuwarden Air Base, a haunt of RNLAF F-16s, in approximately seven minutes' time. To reach it we must cross the Waddenzee, that rare thing a sea that can be traversed on foot at certain times of the day. Wadlopen - mudflat hiking - isn't a pursuit for the inexperienced or the mapless (as Simon and Amber discover in the first twenty minutes of 'De Kalkman'*) in fact it's illegal to attempt it without a certified guide. 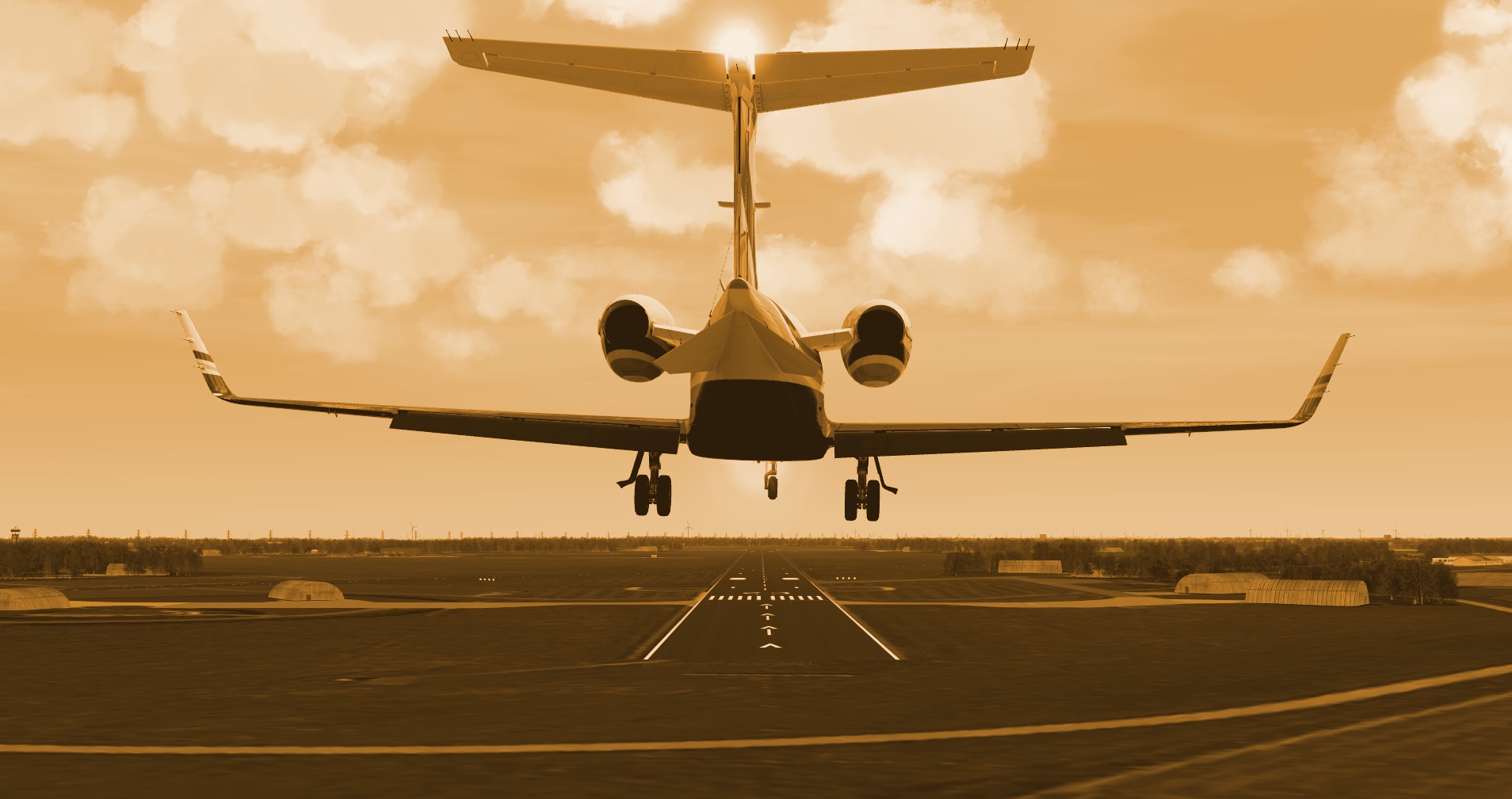 Well, here we are. Journey's end. If you've enjoyed reading these two FPs half as much as I've enjoyed researching and writing them, then this experiment in austerity tourism hasn't been a total waste of time. Hopefully, you'll join Roman and me the next time we go gallivanting. I'm toying with the idea of doing a canal trip next. My starry-eyed companion has his sights set a little higher.