How much of Close Combat's charm emanated from its blood-spattered sprites and non-negotiable shoegazy camera? We're about to find out. Close Combat: The Bloody First, Matrix Games' seven-years-in-development 3D sequel releases next Thursday. In preparation for the big day, I've been playing the heck out of a preview build that contains a third of the game's full complement of 36 battles. While my time in Tunisia (the release version also contains Italian and Norman ding-dongs) has reassured me in some ways, it has disquieted me in others. Don't expect miracles from CCTBF. 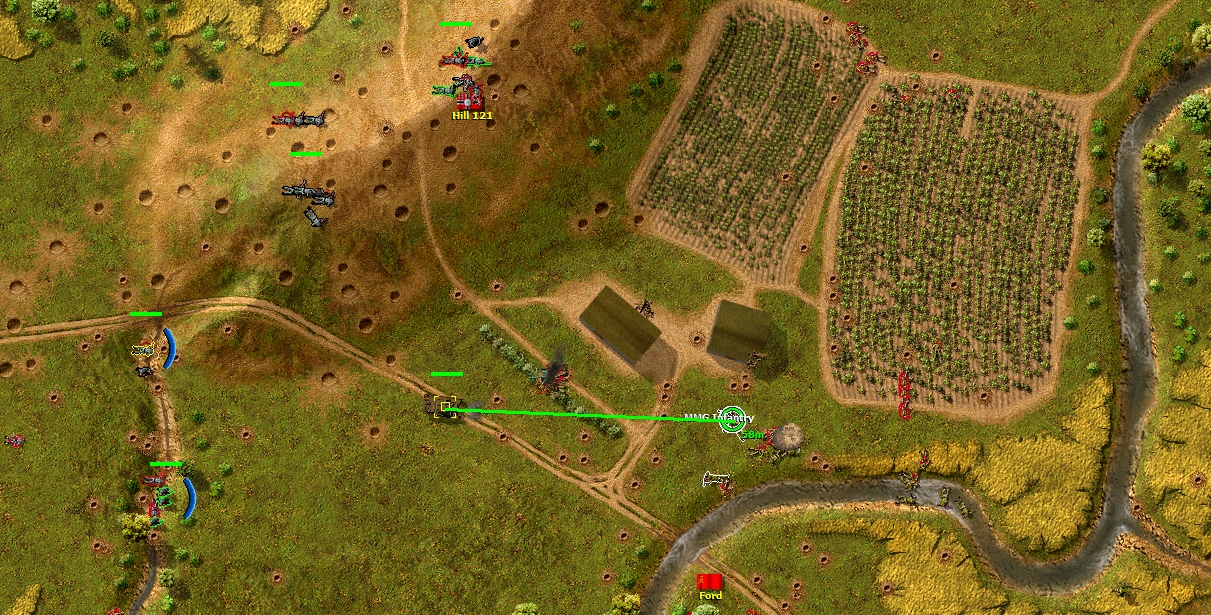 Regular readers of this column will be aware of how much the Close Combat titles mean to me. In a time before Combat Mission and Graviteam Tactics, Atomic's quintet represented the ultimate in hexless WW2 skirmish realism and excitement. Even post-CM, their minimal controls, modest scale, and unusual plasticity meant some fans, despite the tempting alternatives, never fully retired them. 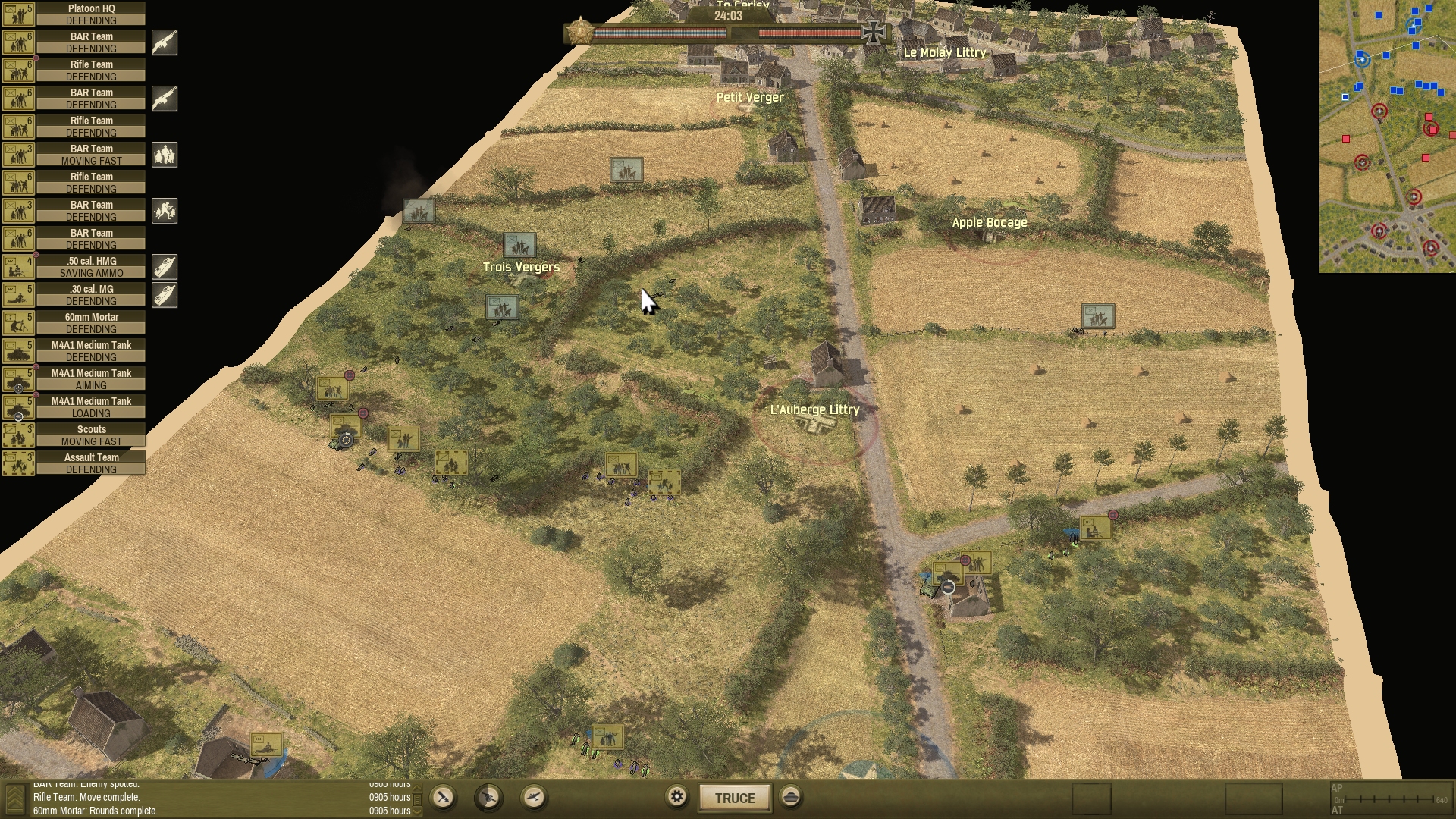 The task facing the small team behind CCTBF was a formidable one: to modernize without complicating and contaminating one of the most distinctive and pleasing play formulas in tactical gaming. A week with preview code has convinced me that CC has survived the engine change with its shining soul intact. Whether it has gained anything of major value through its metamorphosis, I'm less certain of. 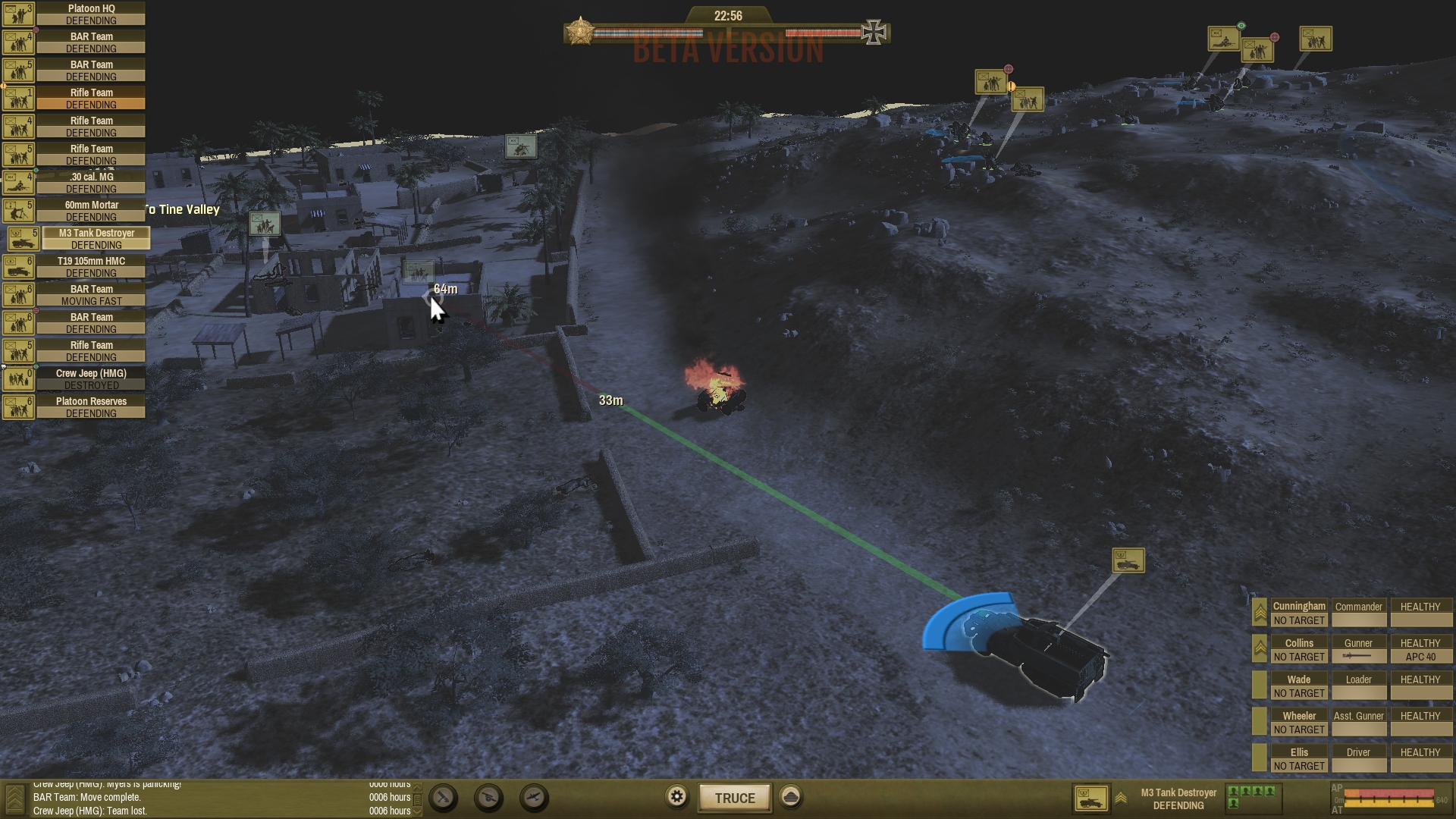 By keeping maps relatively small, unit counts low (invariably 20 or less), and order types limited and familiar (the only novelty is a useful CM-style 'hunt' command), Steve McClaire and colleagues have retained the approachability that made titles like A Bridge Too Far (CC2) and The Russian Front (CC3) so welcoming. The GUI is unashamedly secondhand and all the better for it. There is an interactive tutorial but as everything is so simple and traditional I never bothered to complete it.

I was a little concerned that camera constraints were going to qualify the usefulness of the new flexible viewpoint (a nostalgic top-down view is there for those who want it), but these fears quickly evaporated once I started MMBing. While you can't simulate, say, the view from a window or tank hatch, you can get pretty close to the action and lower the camera to a point where reading terrain is easy. Disappointingly, with the camera untilted at oasis canopy height, all vistas are backdropped by inky blackness. Matrix have decided not to provide skyboxes, which is a shame.

[EDIT. Shortly before this piece was due to appear, I was granted access to the release build, and, to my dismay, discovered much of the preview code's camera flexibility gone. It looks like Matrix have decided to severely restrict camera tilt and zoom after all. Some of the low angles shown in the accompanying screenshots won't be possible. Bah.]

In theory, you shouldn't need to mess with the camera to read topographical wrinkles. A dab of the control key turns the cursor into a powerful 360-degree LoS tool meant to answer all sight-line queries. Unfortunately, at present the shading for out-of-LoS map areas is far too faint for my taste so I find myself regularly descending in order to assess LoS properly. 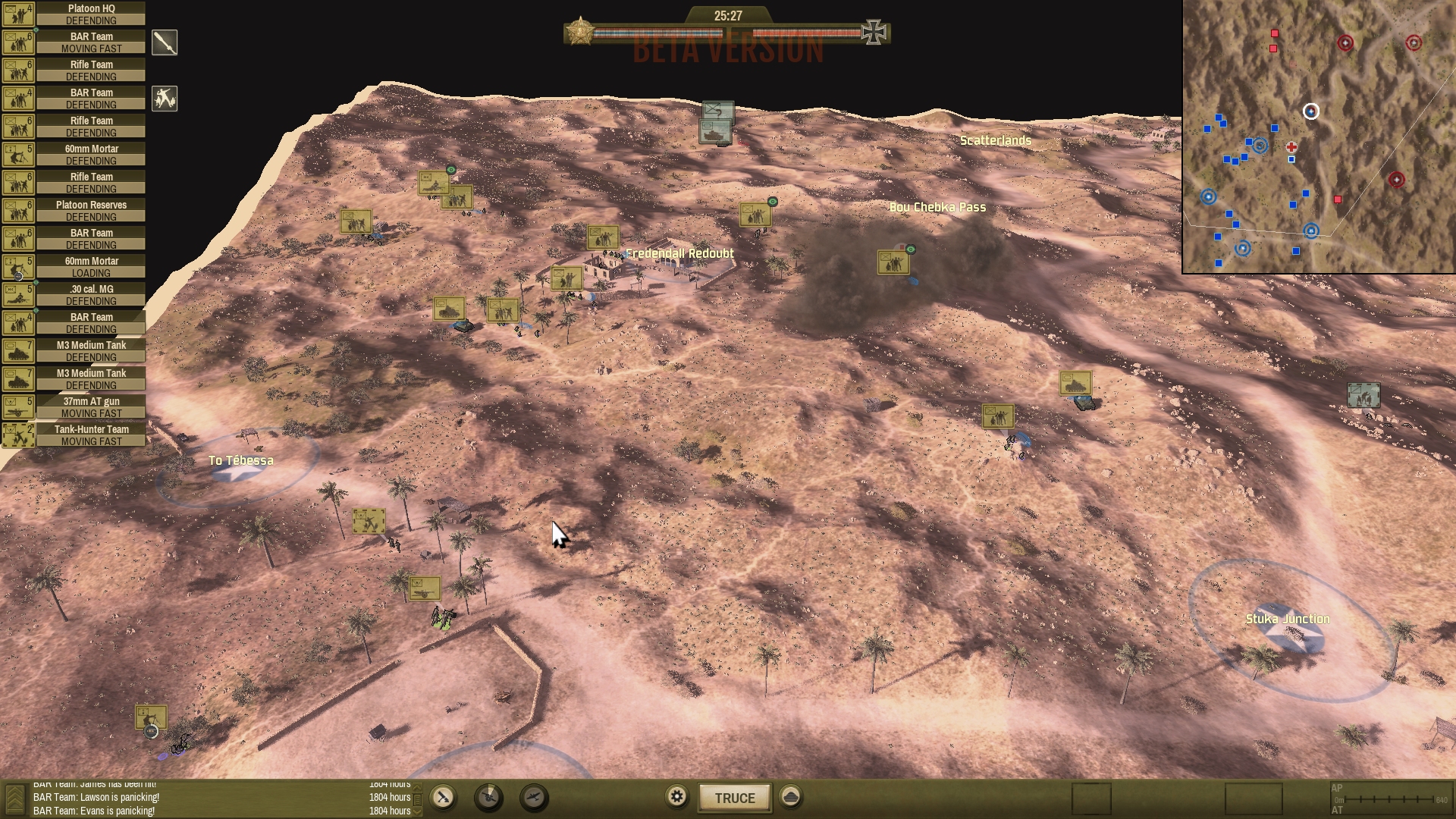 The fetching, fully rotatable Tunisian maps are heavy – perhaps too heavy – on the hillocks, dunes, wadis and ridges. In their eagerness to showcase their new tech, Matrix have stylised many of the real places name-checked in briefings and victory locations. The geographical liberties may annoy some*, but they do, on the whole, ensure tactically interesting skirmish spaces. Your men and vehicles are rarely far from a sheltering knoll, wall, or gully, which is handy considering the amount of individually tracked lead, AP and HE projectiles flying about in an average engagement.

Ballistically, the Archon engine is meant to be several rungs above the old one on the realism ladder. You get fleeting glimpses of the extra precision now and again, but the impact is hardly transformative. Grenade exchanges are much more eyecatching than they used to be with individual pineapples and potato mashers visible in flight and splash damage intuitively effected by cover such as walls and boulders. However I don't believe I've ever seen an AP round pass clean through a thin-skinned target or ricochet off a thick-skinned one and bury itself in nearby scenery.

I sincerely hope an unavoidable side-effect of the new ballistics isn't the current big gun targeting absurdity. In the preview build tank duels frequently descend into farce with close range, stationary AFVs missing each other over and over again. The unflustered static M10 TD in the pic above fired at least 16 rounds at the Panzer II before scoring a hit. Ludicrous.

I'm also hoping the ballistics aren't at the root of the present suppressive fire problems. Persuading a tank to batter an in-LoS building takes some doing right now, the gunner of the tasked AFV often insisting the shot is impossible. 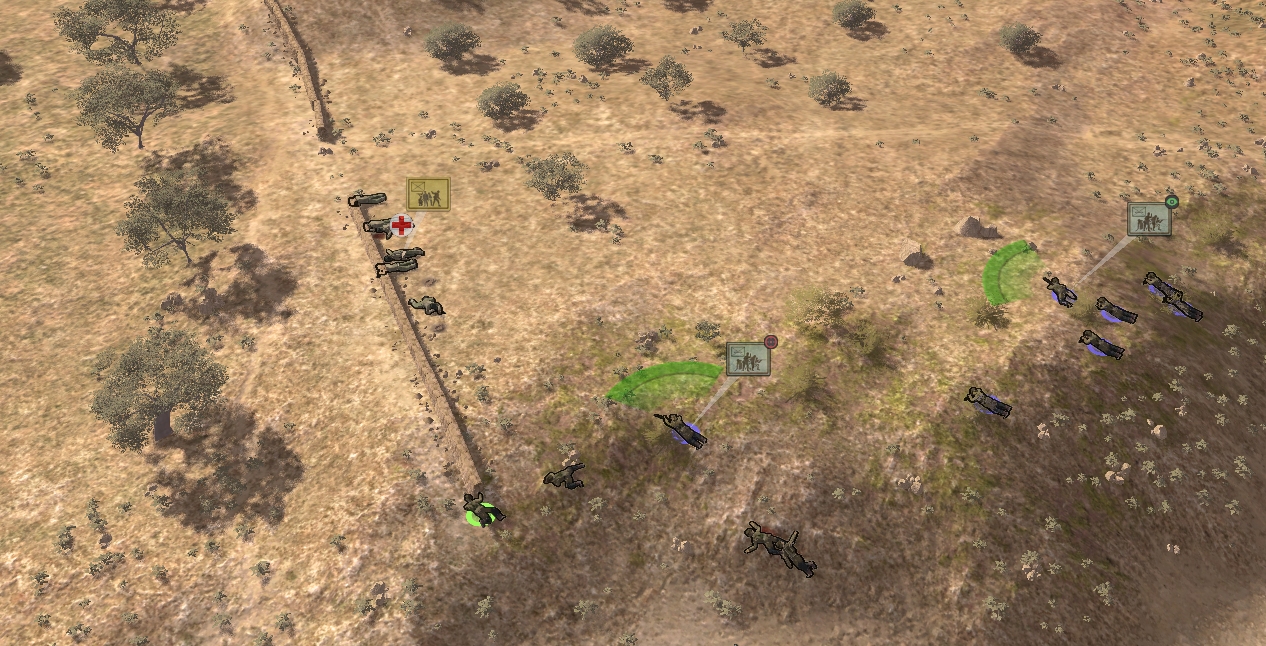 Thankfully, the infantry firefights that are at the heart of most scenarios, ring true. The devs have judged grunt survivability and detectability just about right in my opinion. In-cover infantry units can exchange small arms fire for many minutes without causing casualties. The threshold that determines whether under-fire warriors retreat or 'go berserk' probably needs to be raised a tad, and a few extra weapon fire wavs wouldn't go amiss, but other than that I like the feel of infantry combat.

Talking of sound, I find it hard to believe that no beta tester requested ambient audio during CCTBF's long gestation. The game lacks any form of it - no dog/jackal barks, no howling wind, no camel groans, donkey brays, or distant gunfire. The early CCs worked wonders with their extensive libraries of environmental sounds, and the series reviver would have benefited immensely from following their lead. 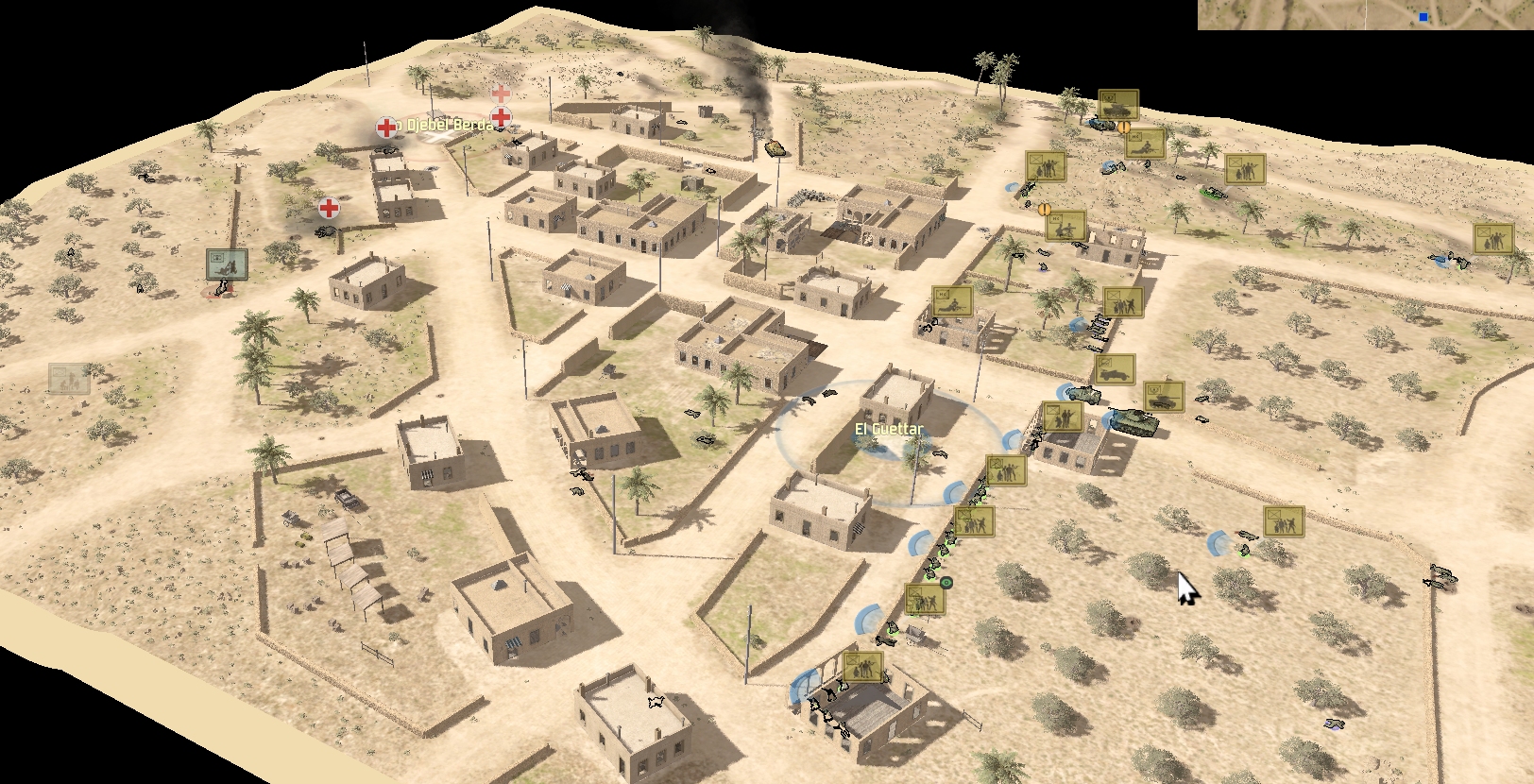 You play CCTBF in exactly the same way you play its predecessors. In attack you push infantry teams and vehicles across seemingly deserted maps, nervously awaiting that first rifle crack or MG stutter. Gradually enemy units show themselves. Stubborn obstacles are dislodged with the help of on-map AFVs and mortars or off-map arty and aircraft, if you have them, lesser ones flanked or overwhelmed by carefully coordinated infantry teams. Here and there individuals fall, never to get up again. Here and there soldiers hesitate, cower, or turn tail. The odd chap decides he's John Wayne and, dander up, runs forward, set on slaughter. LoS fields are studied. Melees watched with crossed fingers. VLs change hands. The clock ticks down. The result screen appears. 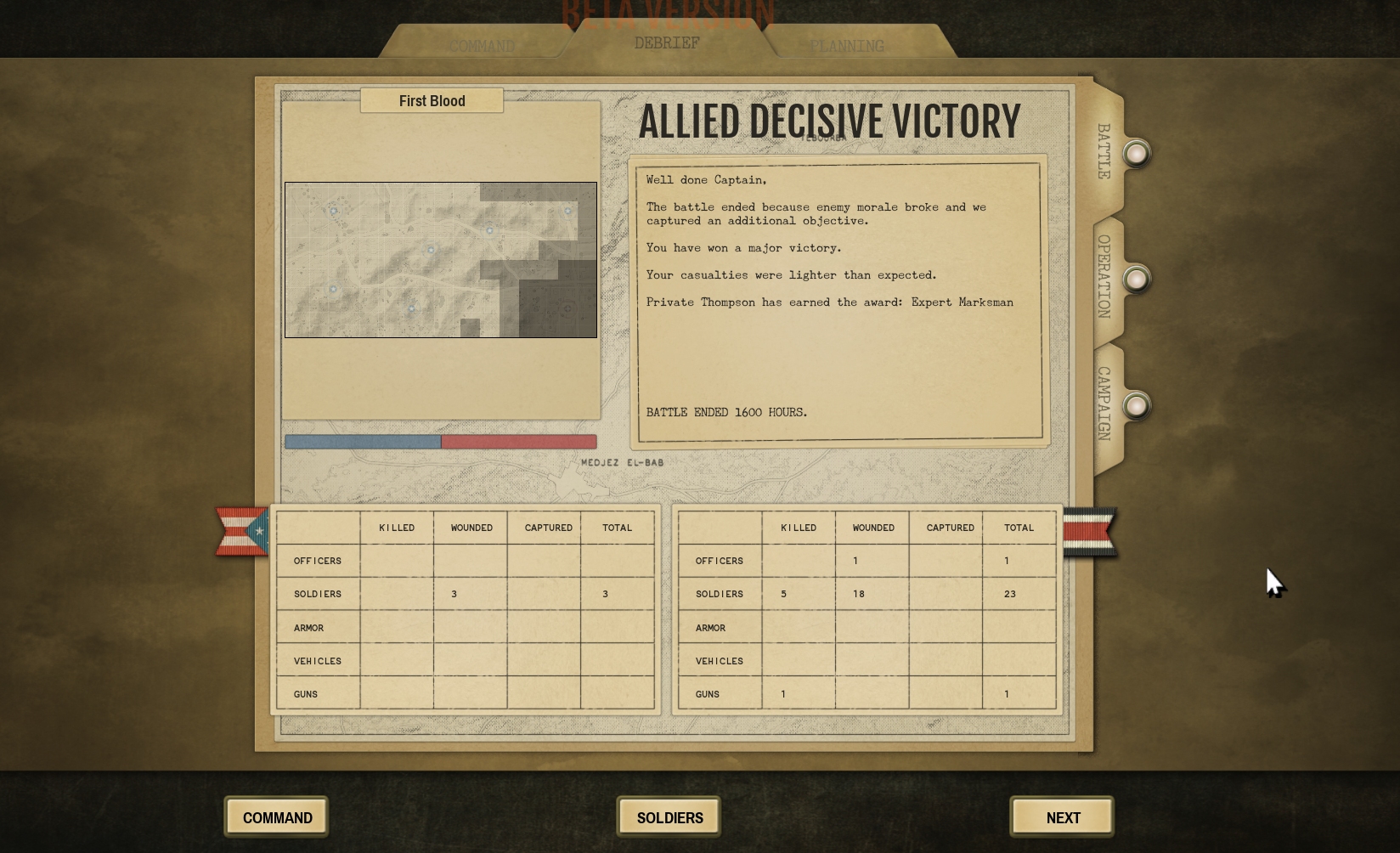 Yes, playing the newcomer feels almost exactly like playing its ancestors and this is both an endearing strength and a potential weakness. I suspect some with fond memories of the series are going to find the play patterns and tactical challenges a little too familiar. One of the main reasons I moved on to other wargames after years of CC was the lack of any real AI progress. Nothing I've seen during the past week, convinces me that the code controlling foes in CCTBF is any more sophisticated than the code controlling enemies in CC5. In fact, I've witnessed scenes that leave me wondering if it's actually deteriorated in some regards. 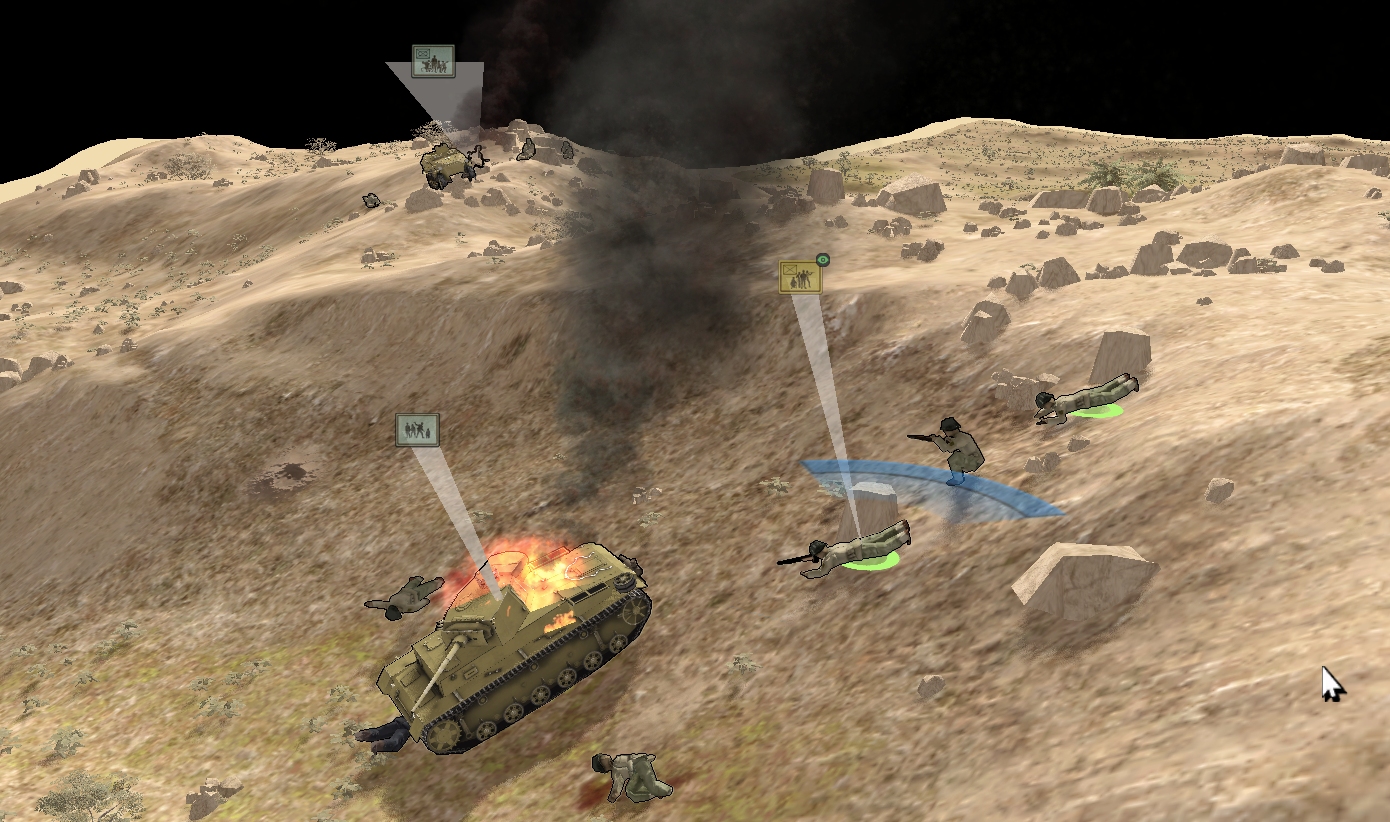 The plump cartoon bee drawn on the first page of my play notes isn't an affectionate reference to the game's Hummels. It's inspired by the AI's usual manner of attack. Far too often the Red Team bumbles, advancing haphazardly... tardily... foolishly. In defence as the Americans I've rarely felt I'm facing an accomplished, determined, back-to-the-wall Afrika Korps. 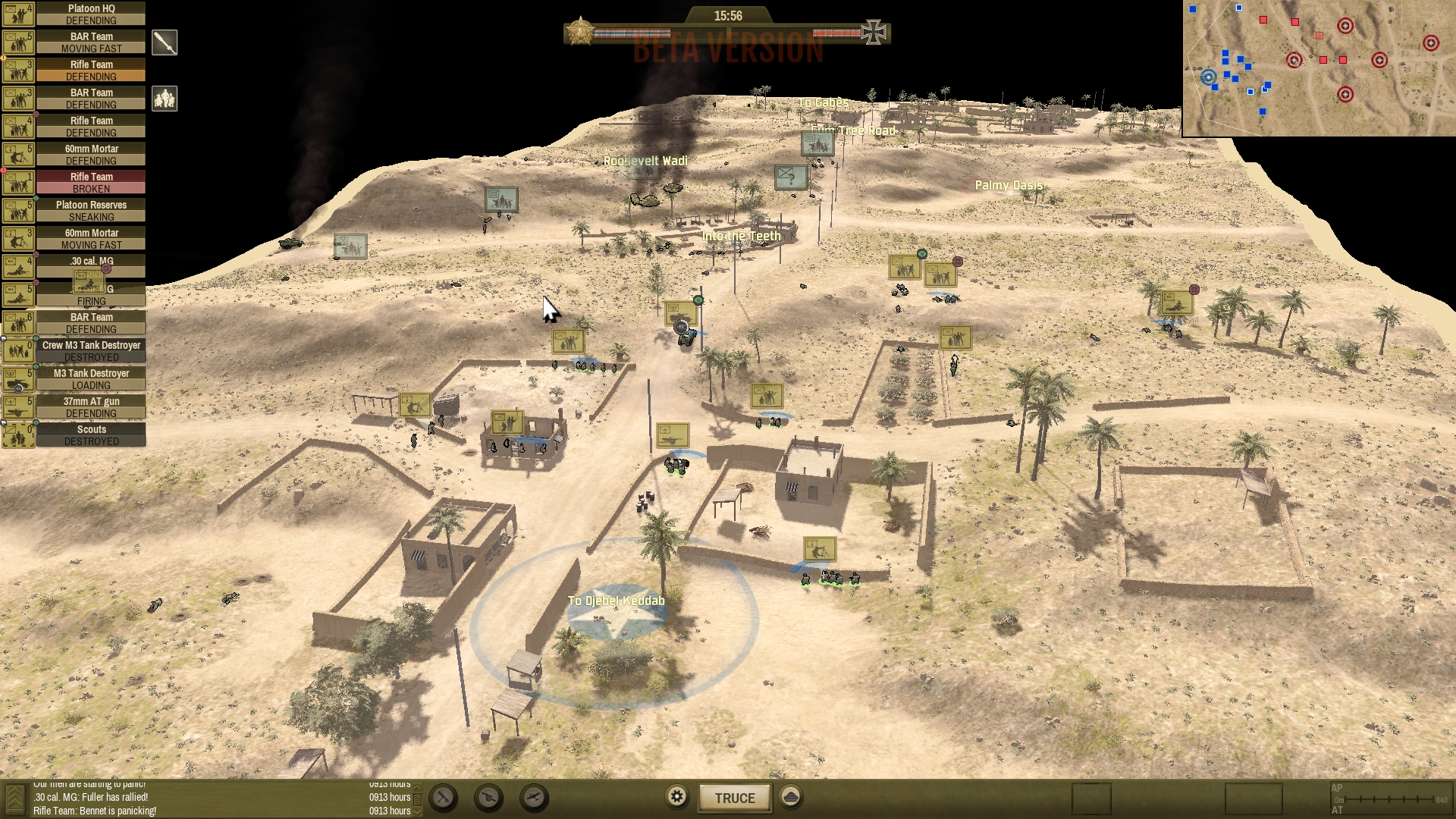 More often than not the CPU fails to coordinate its vehicles and infantry well. Too often it uses lone, unsupported angry houses to snatch VLs, gifting the player simple ambush kills. Too often it reacts sleepily to mortar barrages and flanking manoeuvres. In one of my last tussles I discovered by chance how easy it was to run down Schützen with a trundling M3. During a bloodthirsty ten-minute spell I squelched around a dozen witless foes. It was grimly satisfying but it certainly wasn't WW2. 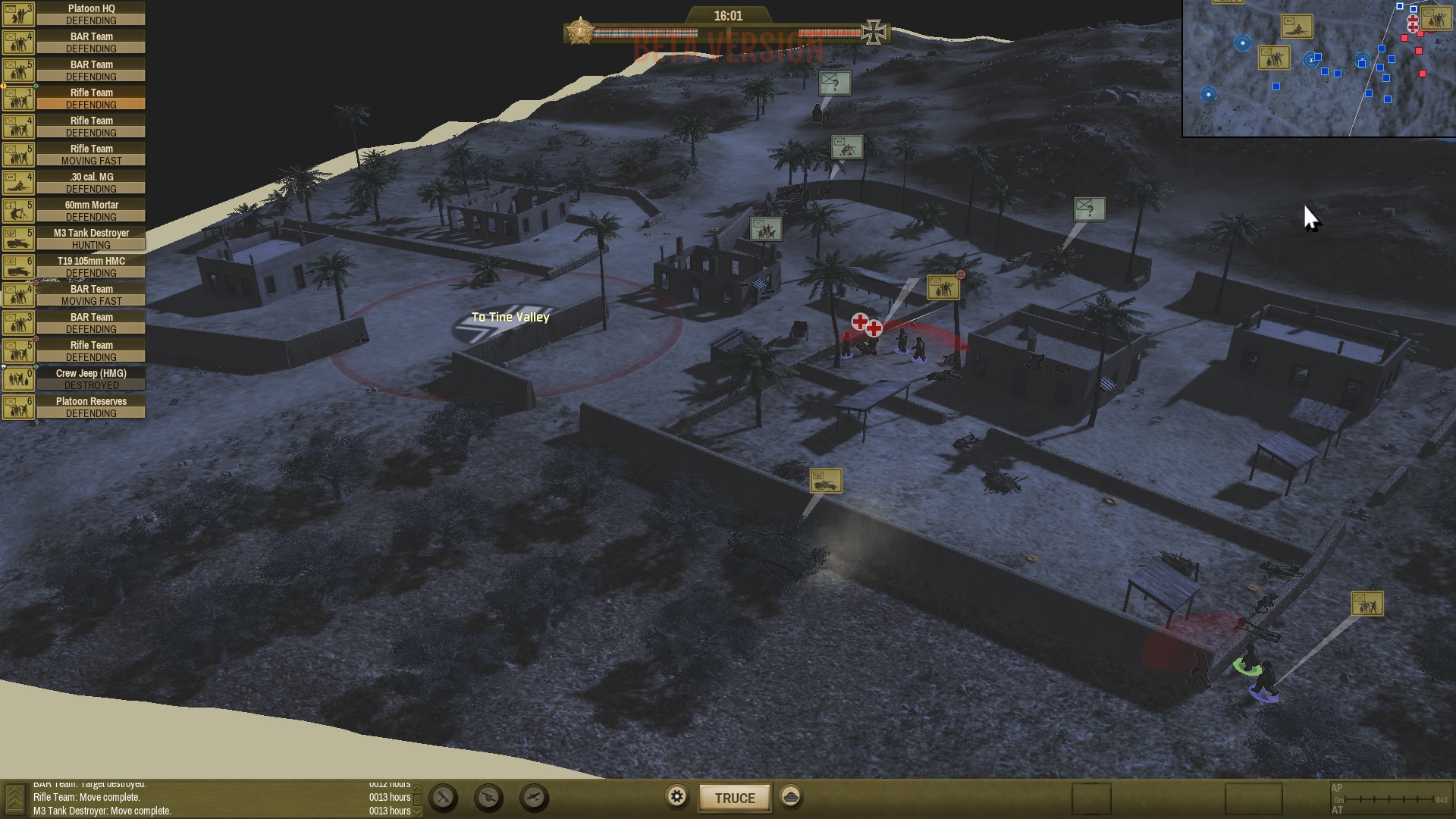 Naturally, the computer handles defence with a little more aplomb, but even there there's room for improvement, clearly unoccupied VLs under its nose sometimes remaining untaken at the end of battles. 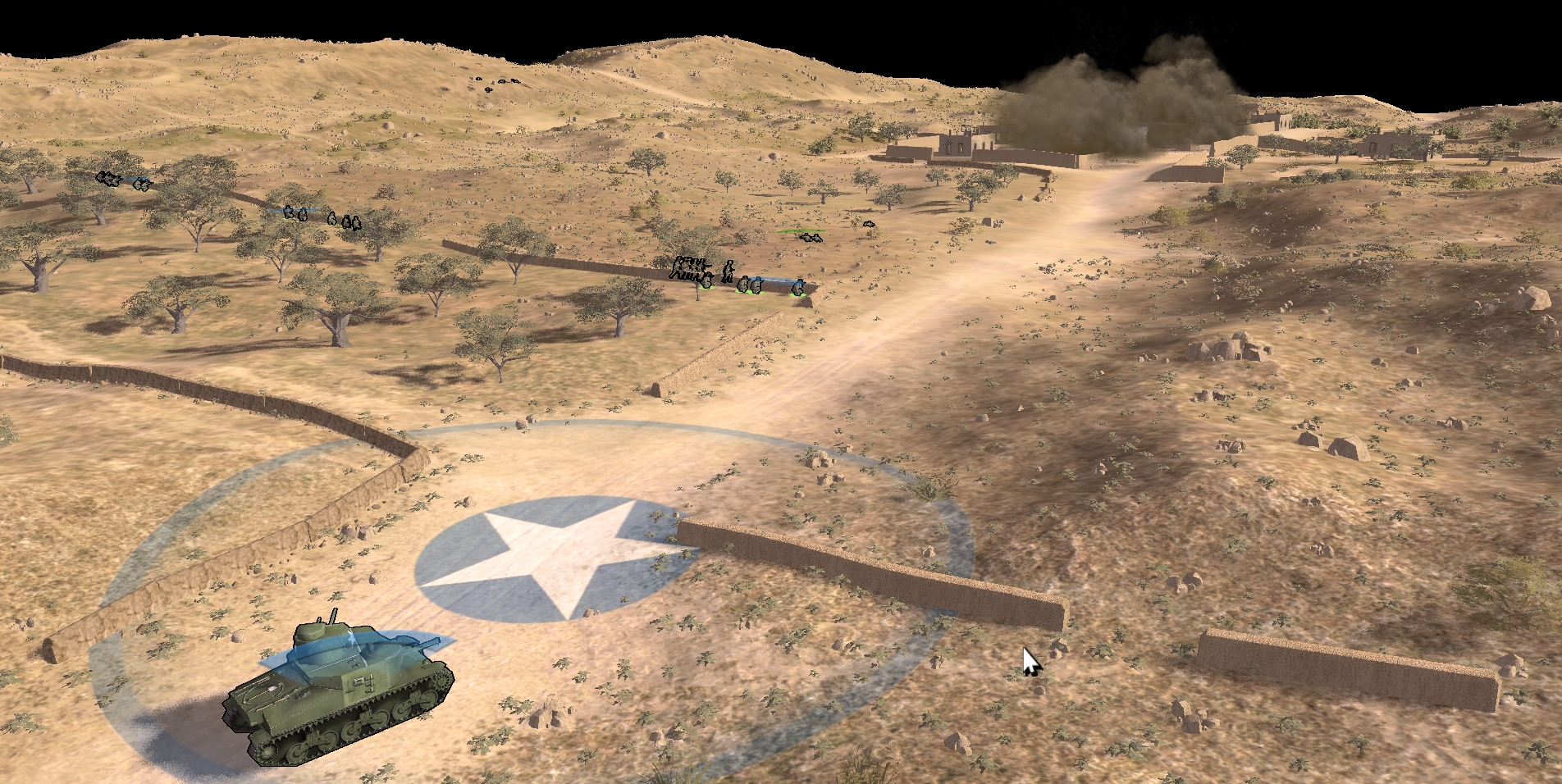 I've other behavioural concerns like the way infantry teams insist on travelling close together in single file, occasionally spin on the spot, and sometimes nonchalantly stroll past spotted adversaries, but will refrain from further digs until I've experienced the AI in its version 1.0 form. In next week's FP I'll also share my thoughts on Close Combat: The Bloody First's campaign system (basically sequenced battlefields with the possibility of forward and, if you fare poorly, backward movement within the sequence) and attempt to distill my decidedly mixed feelings into something resembling a final verdict.