Like all the WWI grand strategy titles that came before it, Strategic Command: World War I isn't awfully good at pathos. When a flurry of enemy assaults reduces one of your infantry corps from “10” to “3” in a single turn, your first thought is rarely “That's another 20,000 families who won't be seeing their loved ones again”. It's generally “Ouch. But it could have been worse. At least the hex is still mine. I'll reinforce or replace the poor battered blighters next turn”. One day a game in this field will dare to break ranks. Tucked amongst the battle reports glibly posted at the close of a turn will be tiny text Mills bombs like “Your old chauffeur, Nobbs, perished at Passchendaele” and “Your son, David, was decapitated by machine gun fire on the first day of the Battle of the Somme”. 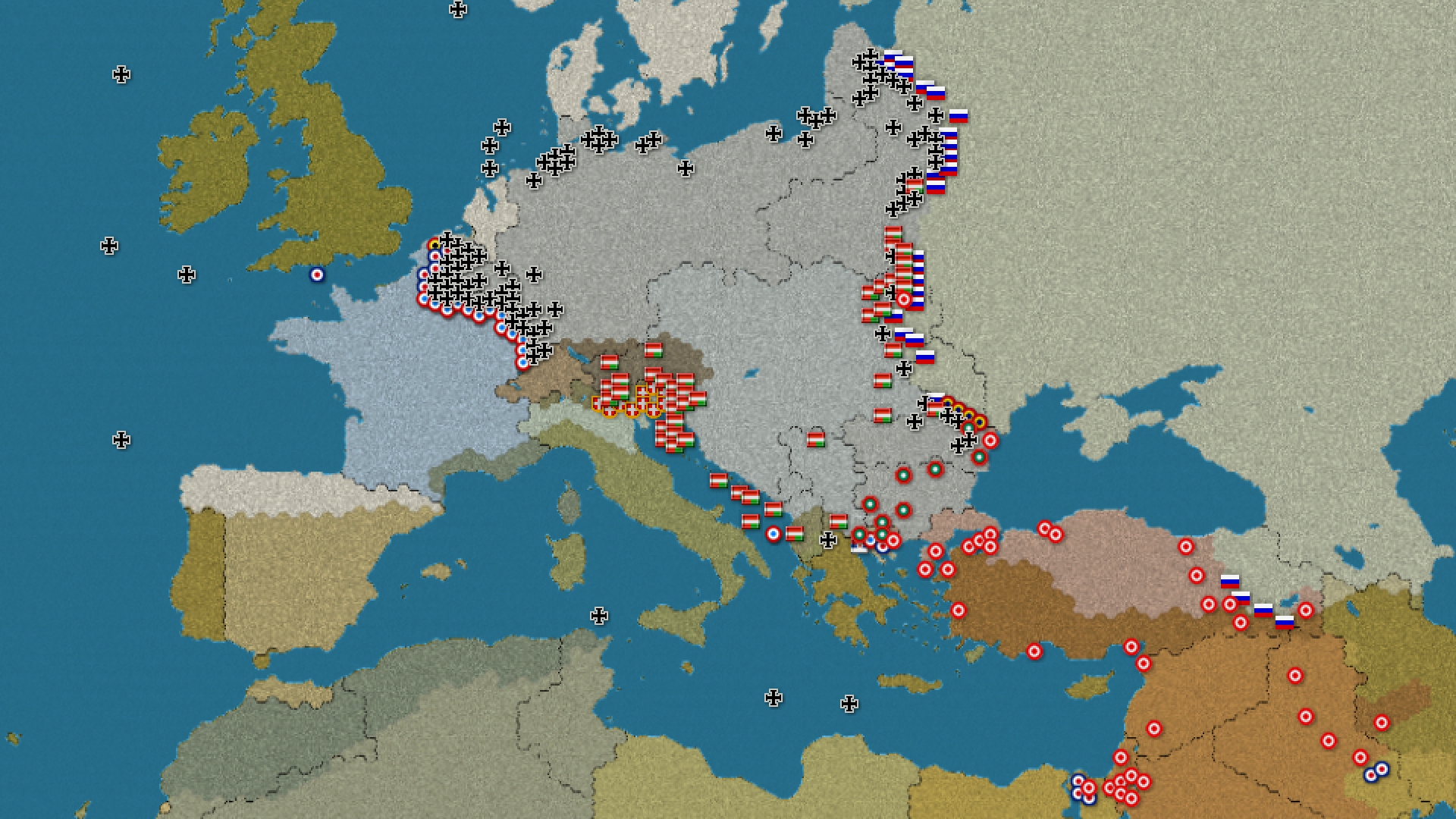 Fury Software's latest military TBS might be as cold as a White Friday avalanche, but happily it envelops like one too. During the few days I've spent in the company of this £31/$40 IGOUGO traditionalist, my eyebrows have knitted in deep thought countless times and arched in sceptical surprise almost never. A nicely judged mix of subtle scripting and operational freedom ensures the game's Europe-dominated map never ends up looking ludicrous, yet allows the exploration of a range of tantalising 'what ifs'. What if the Germans had executed the Schlieffen Plan to the letter? What if Evert had pulled his weight during the Brusilov Offensive? What if Verdun had fallen? What if the Suvla Bay landing hadn't been left in the hands of a complete duffer? SCWWI is a Great War chemistry set par excellence.

What it's not, unfortunately, is an exemplary tutor. Pdf-reliant tutorials might be just about acceptable in the quieter, groggier corners of the genre, but in a game marketed to the masses (even a game that is, in truth, only a few rungs above Panzer General/Corps on the complexity ladder) they feel like a cut corner. The devs expect series newcomers to find their feet by playing the first few turns of the main 1914-18 scenario while simultaneously following suggestions contained in a 30-page chunk of the 300-page manual. 'Read or bleed' is the unspoken assumption.

Instructional shortcomings are magnified by scant tooltips and an absence of small, afternoon-sized challenges. Two of the proffered scenarios are mammoth week-eaters starting in 1914 and utilising the entire map and all of the war's historical participants (in addition to the default campaign, there's a variant where Italy joins the Central Powers rather than the Entente). The third lets you wade into the bloody morass in 1917. If it wasn't for an easy-to-miss acclimatization aid that I've used extensively this past week, SCWWI would be borderline unwelcoming. That aid - the ability to, at any time, toggle individual countries on your chosen side to AI control - is worth its weight in low-background steel. 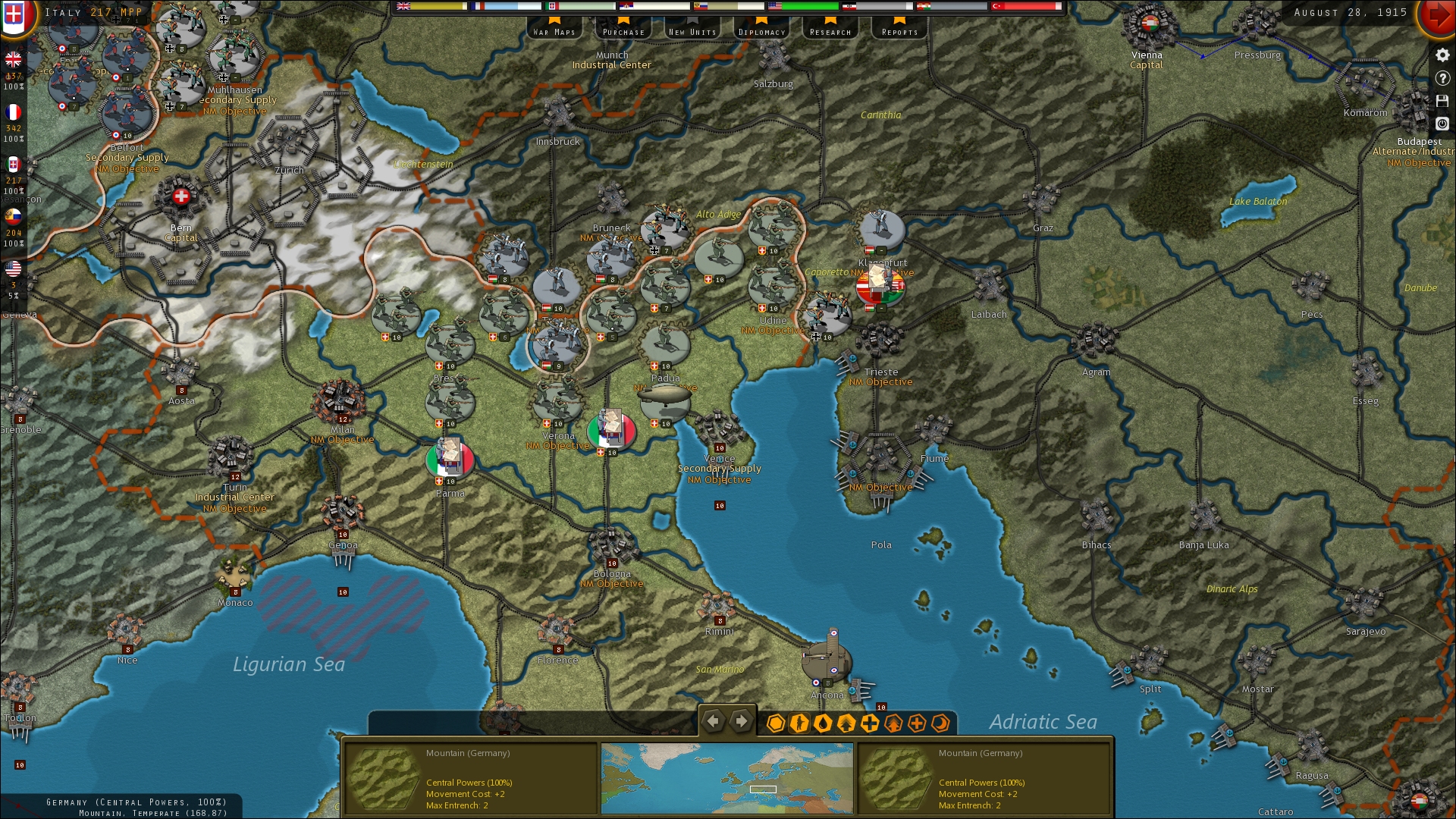 Playing the Entente in my first game, as soon as the front line in the West ceased writhing, I temporarily surrendered stewardship of France and Britain and focused exclusively on Russian operations in the East. By the time Italy entered the war in 1915, I was ready for greater responsibilities, and chose to play them personally too. Not only does this flexible delegation mechanic ensure SCWWI's multi-front chit-rich conflagrations never overwhelm, it also, inadvertently perhaps, recreates the historical lack of coordination between allies rather well. In WW1 as in WW2, frictionless cooperation between allied nations was relatively rare. Countries had their own goals and priorities, and weren't afraid of quietly, or openly in some cases, pursuing them even if that meant hacking off a strategic partner. 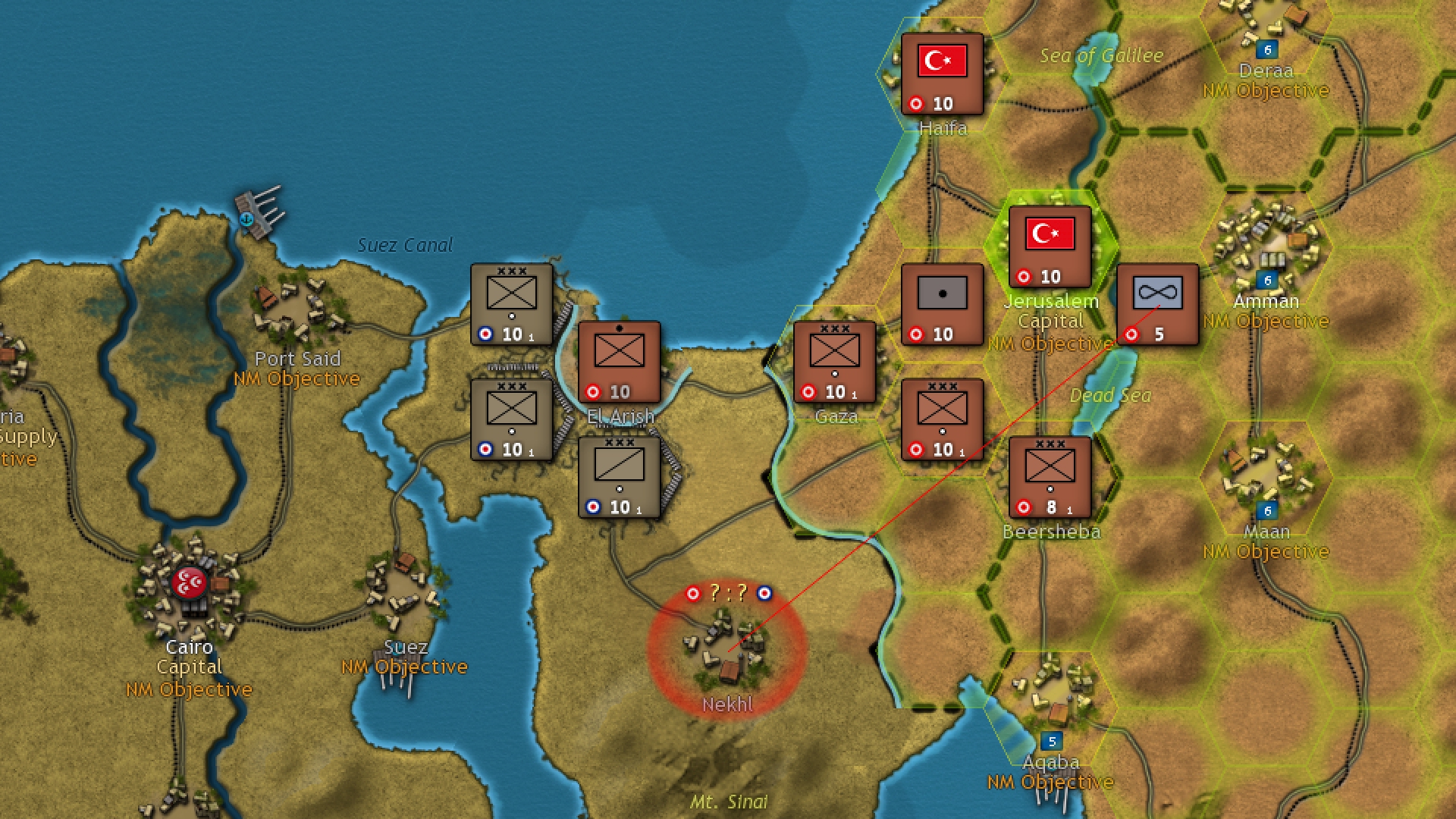 SCWWI avoids the perfect synchronisation simplification, but is guilty of others. A conservative design in many respects, it largely glosses over the command-and-control issues that doomed several important offensives on the Eastern Front. HQs, the game's flag-emblazoned take on leaders, are relatively simplistic readiness and morale boosters – they don't have personality traits. Friendly units never get lost or act of their own volition*. Your martial masterstrokes are never jeopardised by activation failures. 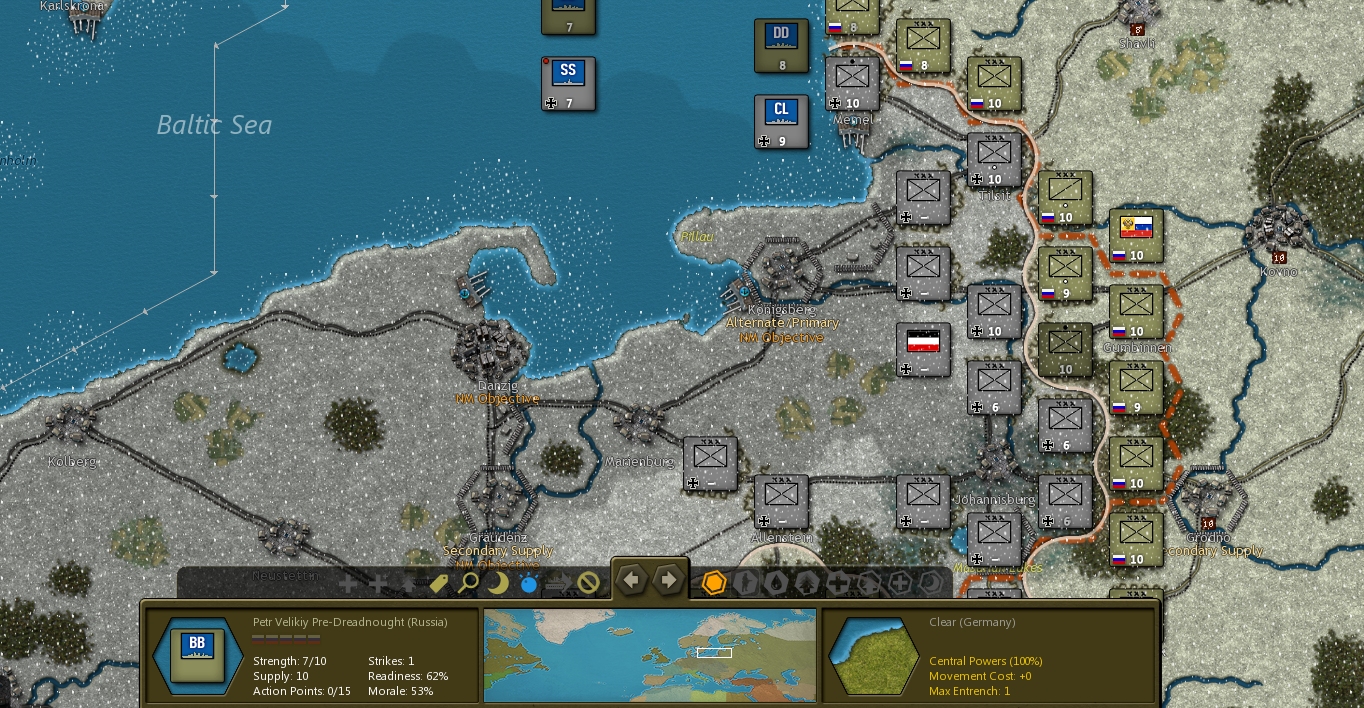 Although I'd have appreciated a dash more fuzziness and humanity, I'm struggling to think of a Great War grand strategy offering that immerses and imitates better than this one. Logical and easily grasped, the rules governing things like combat, movement, and supply, conspire with capable AI and an intricate events system to produce ersatz history abuzz with echoes. Right now in my current game, I'm locked in a gruelling impasse in the West, and the mountainous Italian Front feels similarly petrified. There are opportunities in the roomier East and, possibly, in the Caucasus too, but the Central Powers uses its railway network to shift troops so deftly, my breakthroughs seldom come to much. Bitter experience in East Prussia, Poland and Galicia has taught me how dangerous it is to spread my forces thinly. I can't shake the feeling that my adversaries can schwerpunkt, pocket, retreat and reinforce, every bit as adeptly as I can. There are difficulty settings – foes can be granted various economic, detection, and combat bonuses – but I doubt I'll be using them anytime soon. 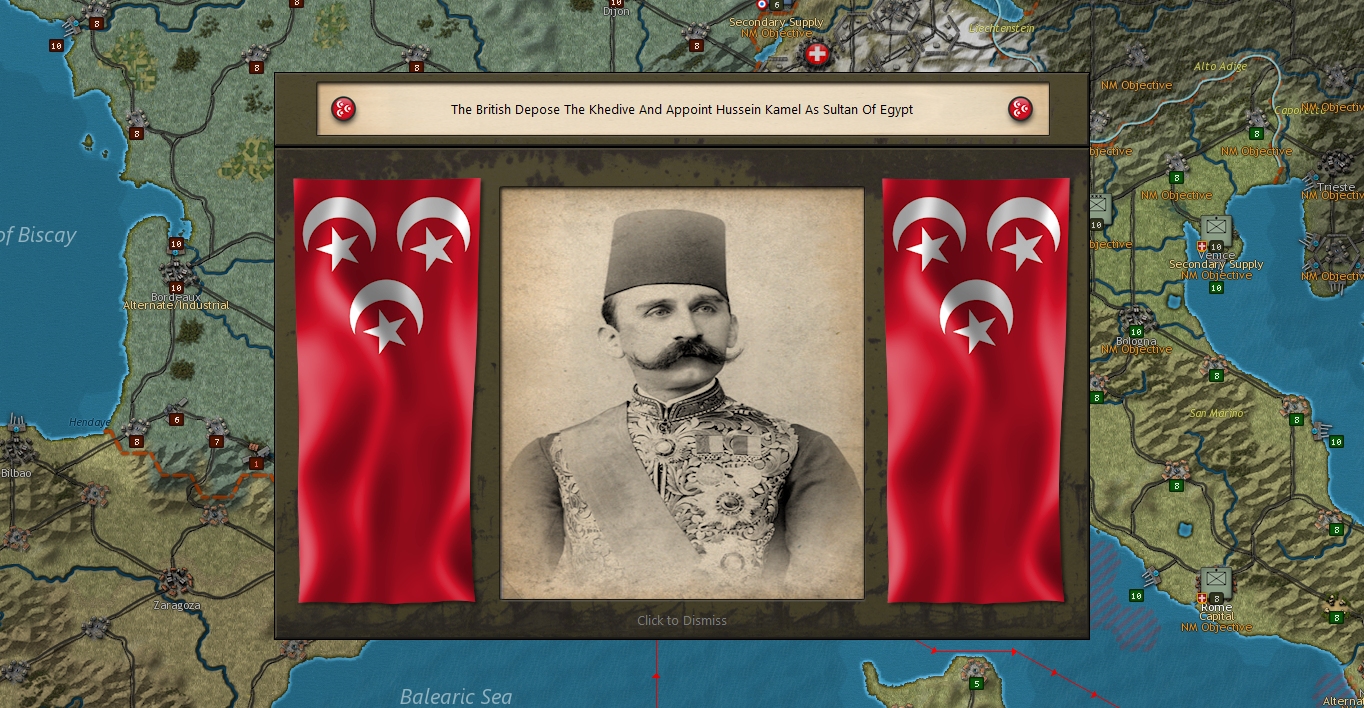 A simple chance-laced diplomacy system allows for the courting of fence-sitting minors and the delaying and hastening of historical timetables. The points at which the likes of Italy, Romania, Turkey, and the USA enter the abattoir are not written in stone. 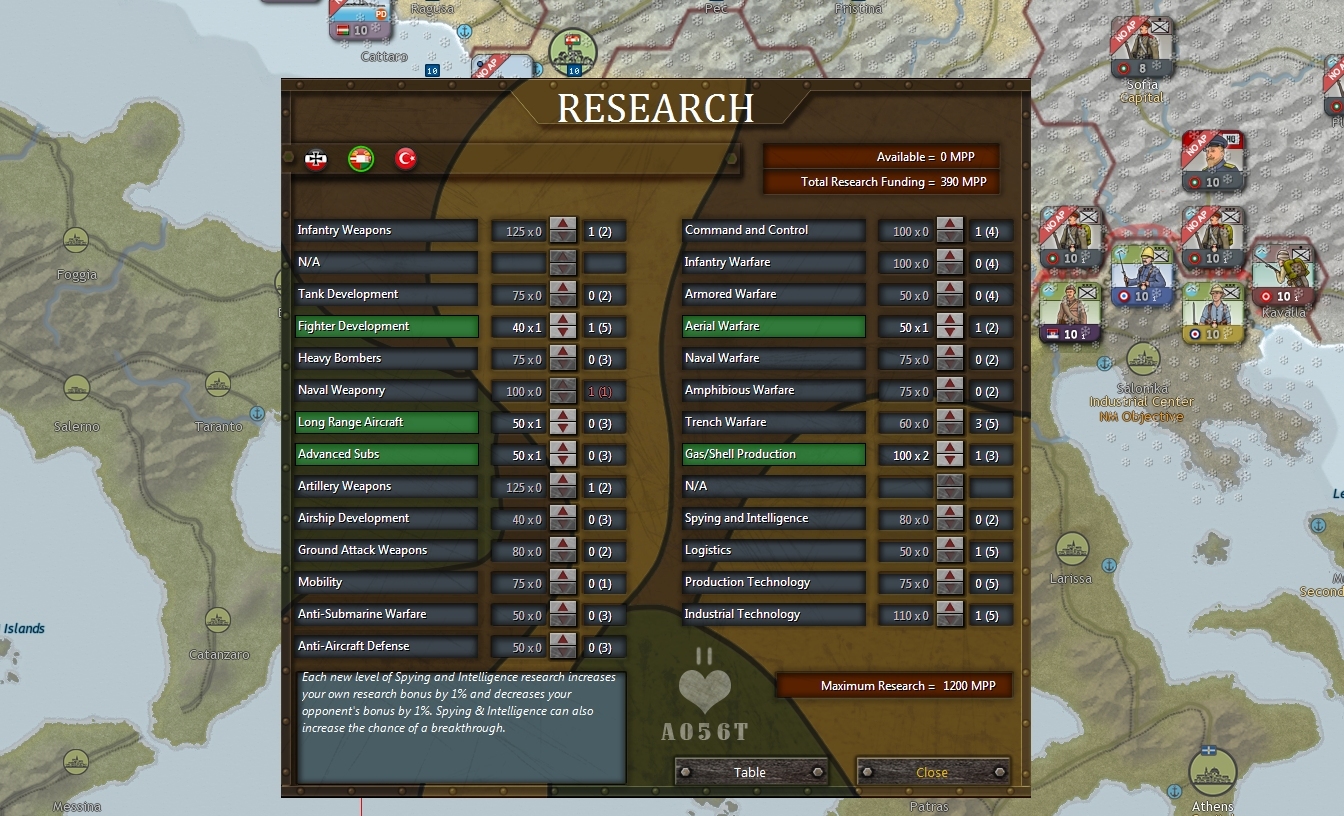 Similarly transparent and lightly seasoned with uncertainty, research can be conducted in around 25 different fields and is financed by the same 'Military Production Points'* that finance unit production and reinforcing, long-distance movement, and diplomacy. Loathe juggling oil, coal, steel and wheat stocks while trying to wage war? The effectively single-resource SCWWI should suit you to a tee.

* Your MPP income is determined by the resource hexes you own and your industrial level. 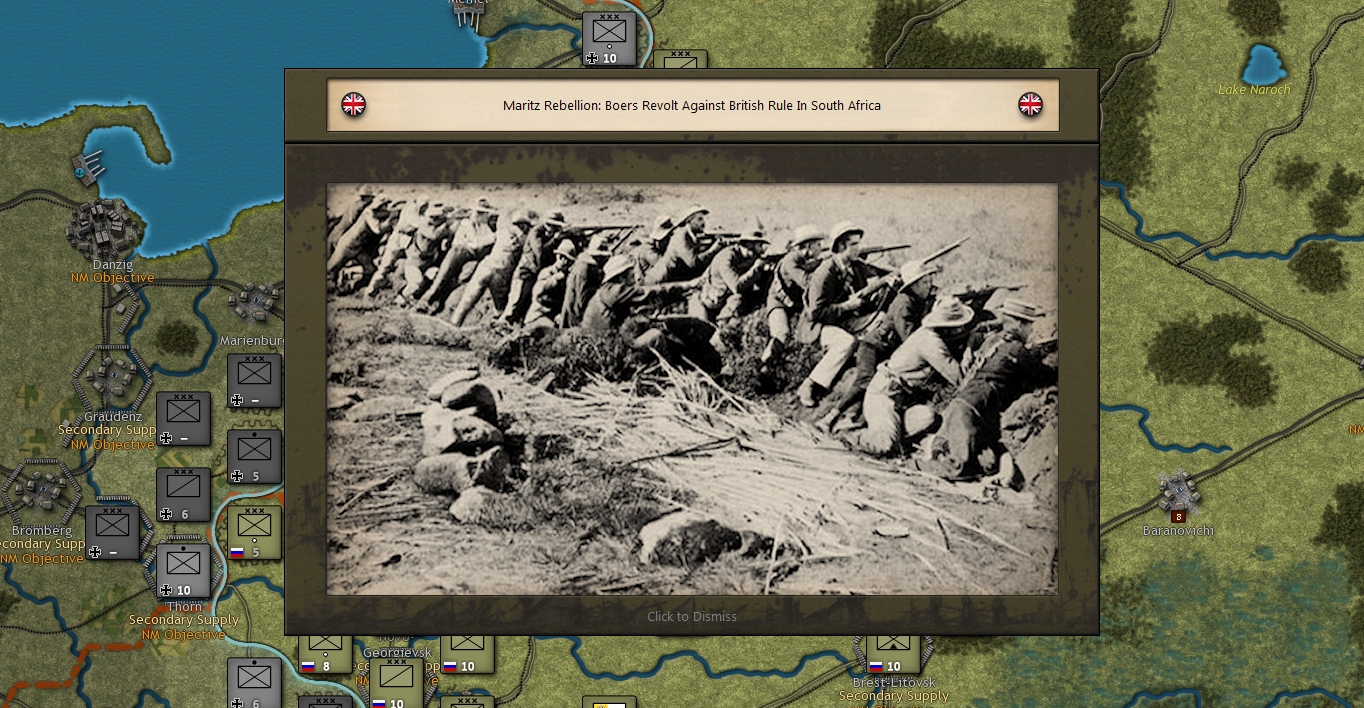 It's rare for a turn (turns represent two weeks) to end without some sort of event pop-up or decision dialogue interjecting. Ranging from fascinating snippets of historical trivia to the kind of global news stories that shared front pages with war updates during the period, the former are purely there to educate and enhance atmosphere – a job they do magnificently. 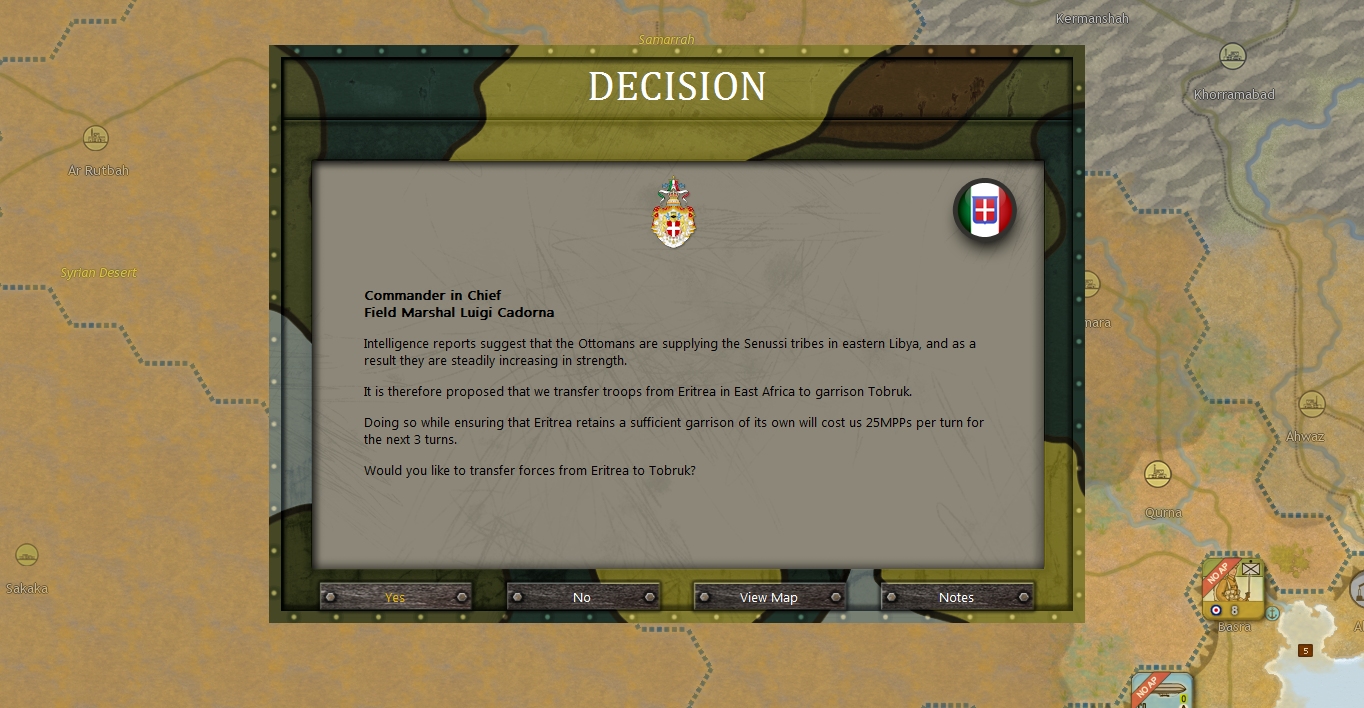 The latter turn real events into interactive dilemmas often involving the expenditure of precious MPPs in return for some small boost to your own or an ally's fighting ability. 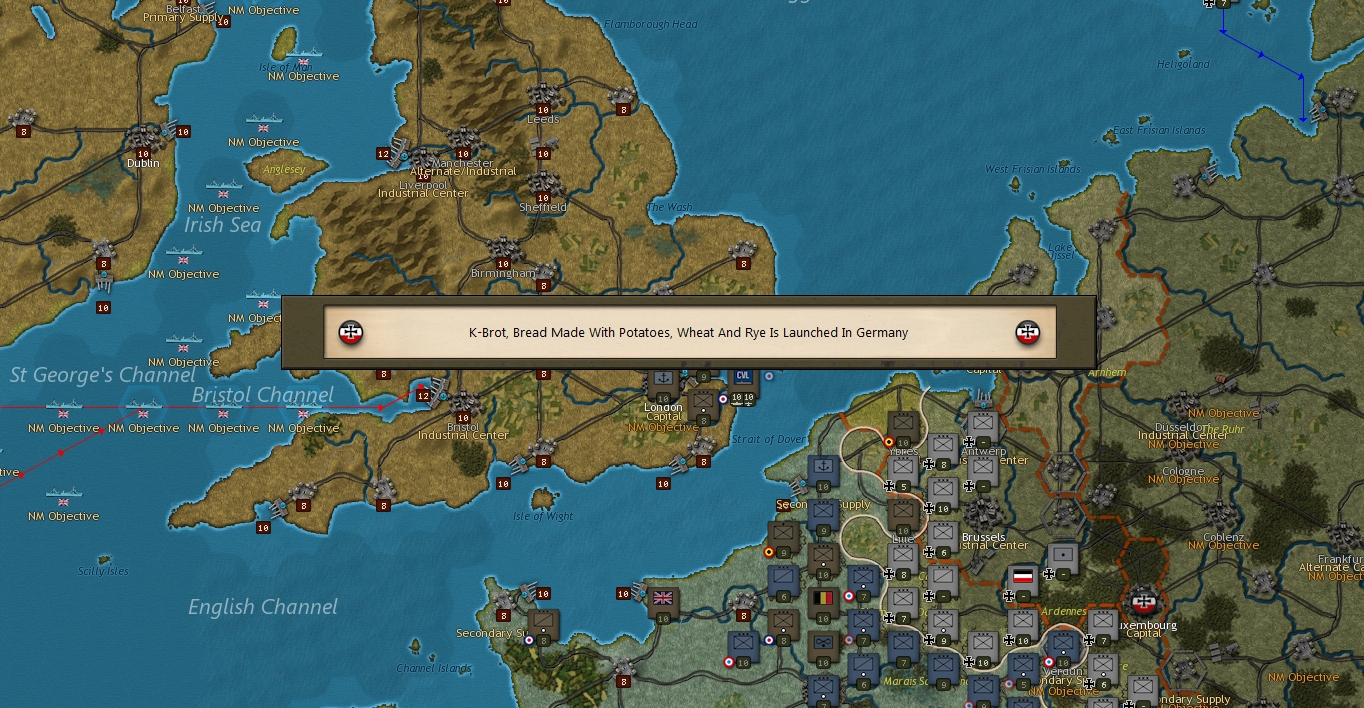 A rigid one-unit-per-hex rule helps keep battlefronts legible but does lead to some counter shuffling and the odd realism compromise. To have any chance of hacking a niche in a thick barrier of full-strength foes, units must be rotated to the rear once they've attacked (something the AI does well). Shift-click unit switching ensures this process isn't too onerous. The fact that air units and HQs monopolise the hexes they occupy isn't as aggravating as it first appears (both types can sit some distance behind the lines and still contribute) but on the crowded Western Front it does occasionally influence tactics. 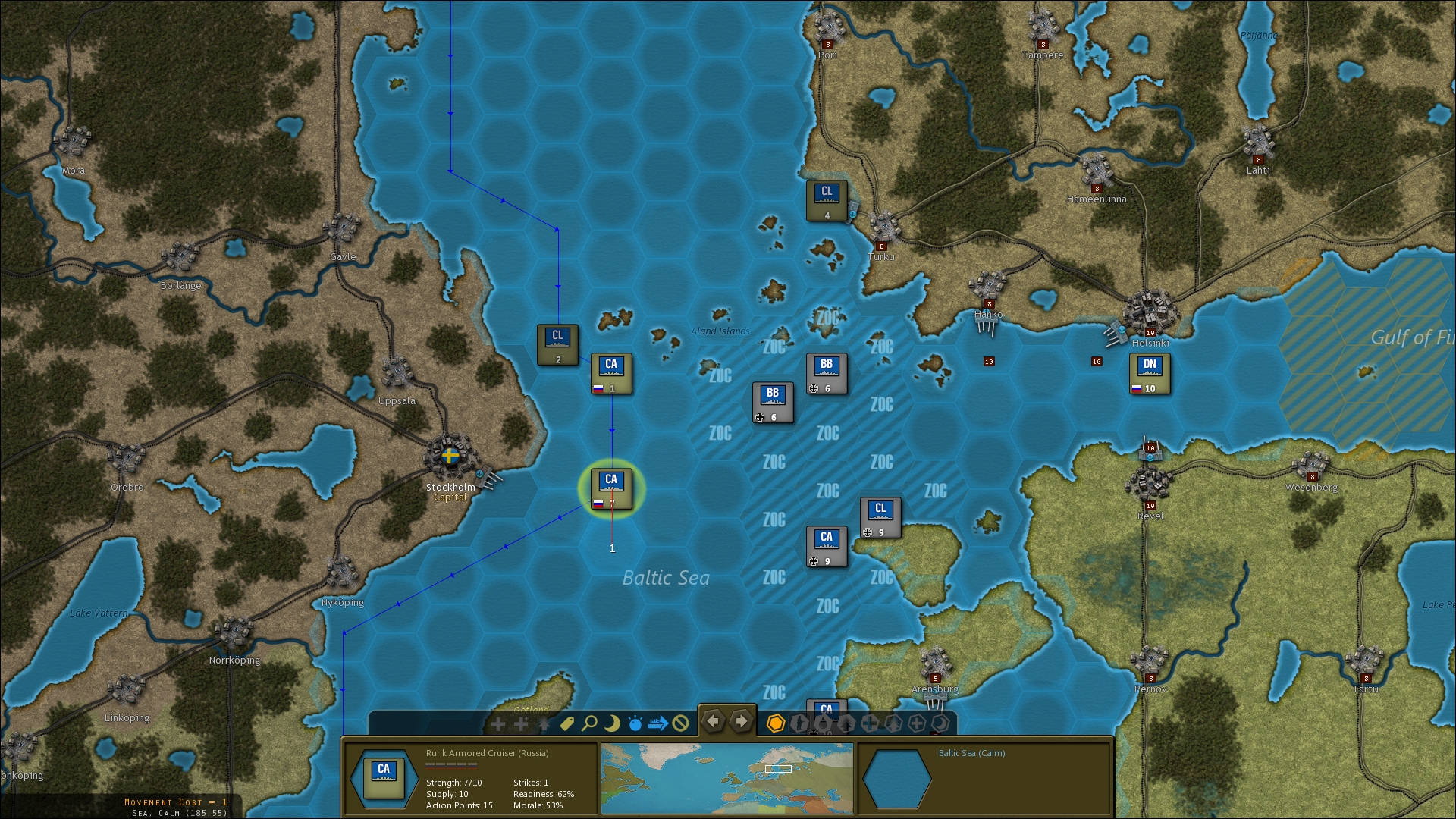 The issue of single occupancy map spaces is most distracting at sea. The clashes that occur in the game's blue and grey hexagons are nowhere near as convincing as those that occur in brown and green ones largely because of Fury's questionable approach to fleet simulation. Instead of allowing the player to assemble and move sizeable flotillas as single units, in order to fight a Battle of Jutland or Dogger Bank you must laboriously move a gaggle of individual ship types out into the North Sea, deliver your attacks, then wait, with crossed fingers, while the enemy responds. The combination of widely spread fleets, uniform weapon ranges, and IGOUGO two-week turns results in naval duels that are as hard to master as they are hard to credit. Convoys, blockading, and troop transporting are handled in a far more elegant and persuasive manner in comparison. 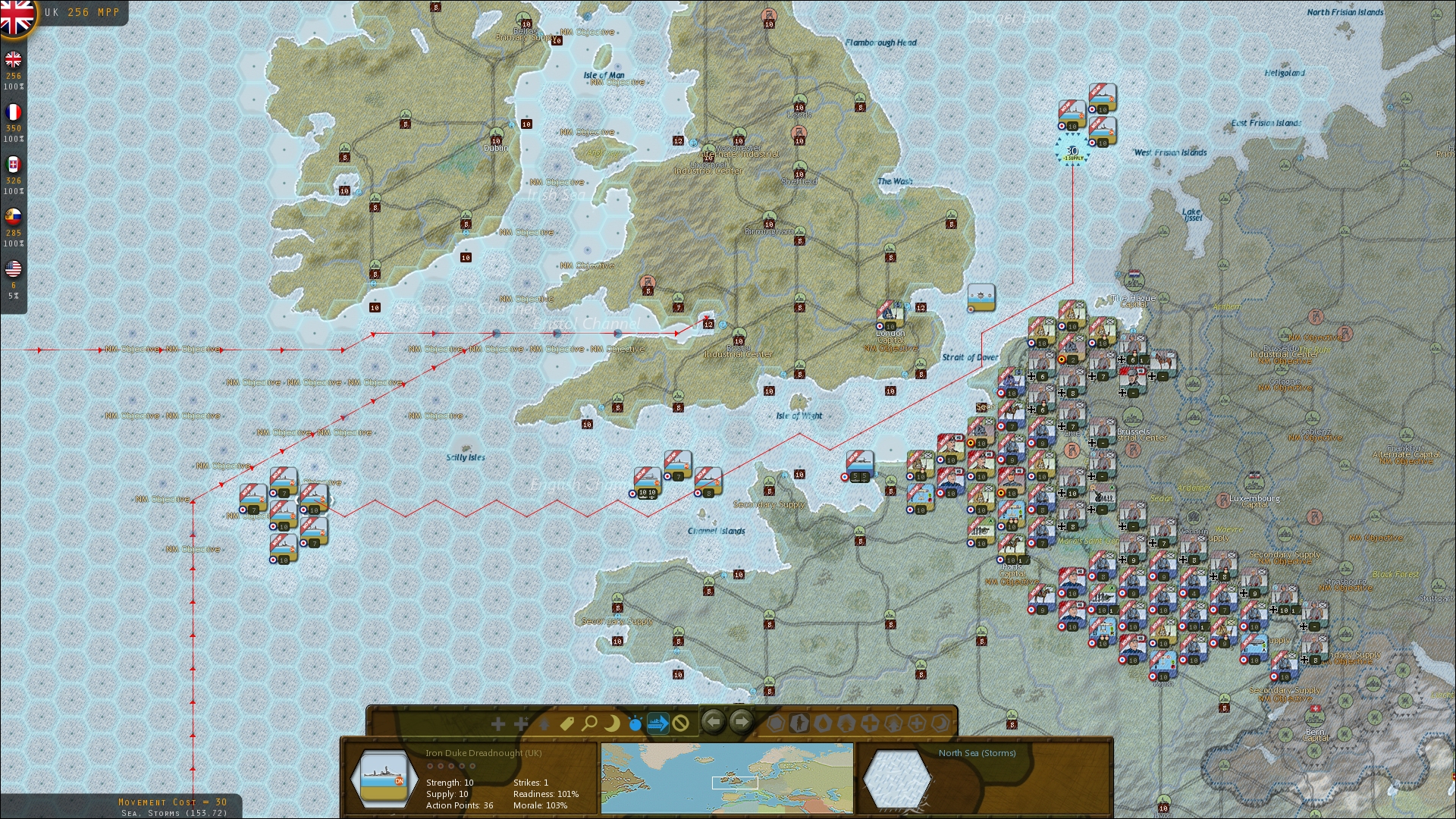 If you're wondering why the screenshots punctuating this piece come in two markedly different styles, this forum thread will provide the answer. I plan to play a lot more of the uncommonly challenging, colourful, and plausible Strategic Command: World War I in coming months (I've not encountered a Great War grand strategy title that is more to my taste) and, having discovered IronX's handsome visual overhaul, now wouldn't be without it.