Field of Glory II: Immortal Fire burst into flames on Tuesday and today's column is crowded with Greek warriors. The pictures above explain, as effectively as any string of letterclots, why these two facts aren't connected. On the left is RIOT, a handsome crowd control wargame partially undone by its eye-catching aesthetic, and on the right is Trireme Commander, a history-steeped Iron Age naval sim with frustrating martinet tendencies. 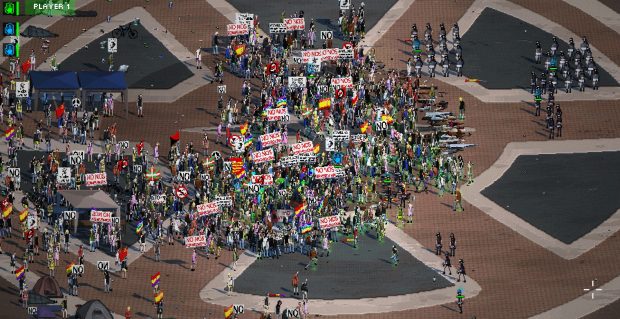 Fairly early on in my relationship with the Early Access $12 RIOT I found myself mentally muttering a question I hadn't mentally muttered since 2002.

"Aren't riots by their very nature impossible to orchestrate?” 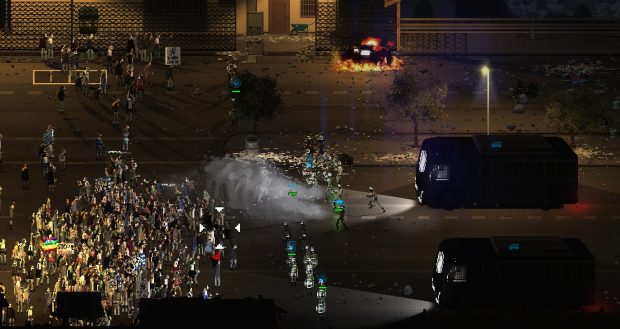 This nagging concern and the fact that only one of the game's two playable factions operate in a manner similar to a traditional wargame/RTS force, meant I spent my first few hours with Leonard Menchiari's proud-to-be-pixelated creation exploring my inner fascist. 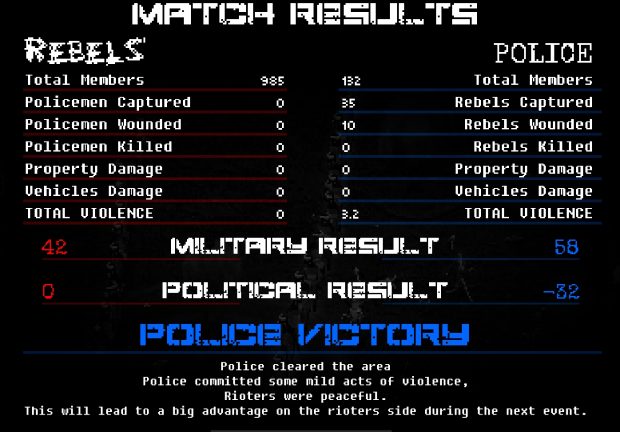 My cursor clicks sent knots of baton-wielding law upholders surging into mobs of placard-gripping idealists. They mobilised snatch squads and moved vehicles with grill-protected windows. They spread choking clouds of tear gas and smoke, and filled streets with blood and panic.

RIOT captures the spectacle, atmosphere and chaos of civil unrest brilliantly, but a clever campaign mechanic, and reality-based mission sequences sprinkled with haunting in-engine cutscenes, ensure the game never feels gratuitous or glib. Whether you're in Spain, Italy, Greece or Egypt, playing as police or protestors, there are always explanations for the anger and incentives to keep violence to a minimum. The more aggressive your approach - the more injuries you cause - the bigger the backlash and the more resources your opponent gets in the next confrontation.

The brief, morale-dominated clashes themselves tend to be tug-of-wars fought over solitary chunks of real-estate – hang onto this area of the square, push the mob off this section of bridge, clear this camp. Single Victory Locations wouldn't necessarily be a problem in a traditional wargame, but in RIOT's fairly cramped and linear battlespaces, it restricts options and drains tactical colour. Ironically, the striking sidescrolling aesthetic that ensures RIOT is such a Breughelian eye banquet, seriously compromises its ability to simulate . 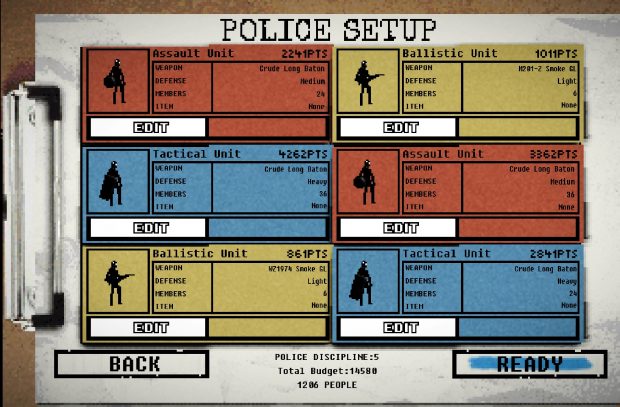 Play usually boils down to moving a handful of units around a pocket-handkerchief environment in which cover and LOS is insignificant. Employ formations and special attacks judiciously (most of the latter have cooldown periods) and keep chivvying (shaken units like to retreat) and you'll either prevail, progressing the campaign, or fail, necessitating a scenario restart. 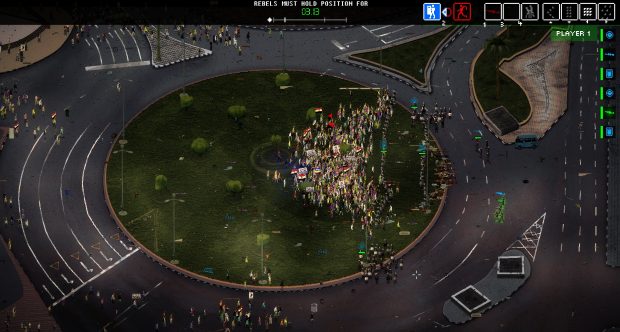 My day of baton charging and molotov cocktail serving left me torn. I wound up in love with Leonard's brick-chucking, truncheon-wielding Lowryites, yet craving a top-down riot sim in which street layouts were important and goals could be approached and defended from multiple directions. 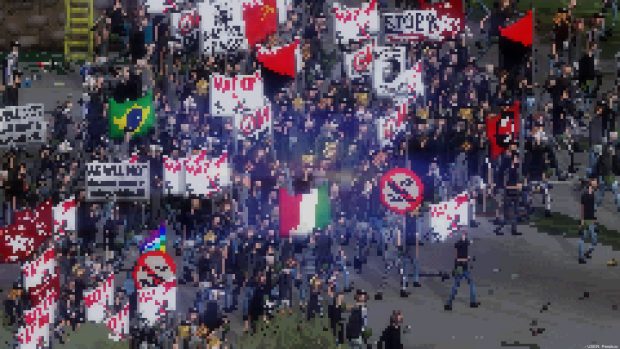 RIOT is unlikely to escape its perspective prison during Early Access. What it might do, though, is gain strength through AI improvements and better information provision. If weapon effects were a little more legible and enemy forces a little sharper and better coordinated, it's possible my tactical linearity/simplicity concerns might begin to fade. Even now the game can be recommended on purely sensory grounds. Of all the games I've Flare Pathed this year, I can't think of any more eye-catching in motion and gallery-worthy at rest than this one.

“There are no features that enhance the capabilities of the triremes to make the simulation more exciting, fast, explosive, fiery or whatever. Playing the game should educate the user to the point where they understand clearly the mechanics of triremes and the tactics and pace of the battles.” 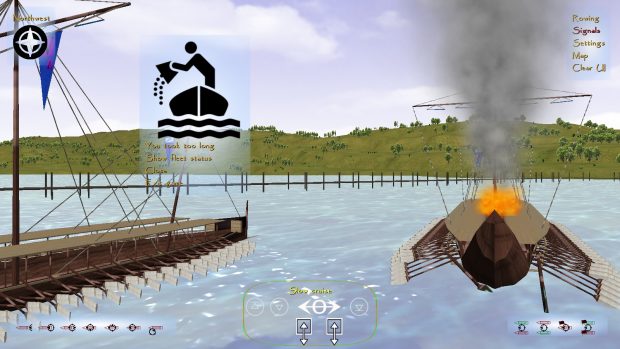 He also doesn't believe in coddling mollies. I've spent the past week trying and failing to gain the rank necessary to participate in one of Trireme Commander's large Salamis-era fleet engagements. Because every one of the game's 15 or so scenarios is rank graded and promotions only come when you've completed every mission on a specific tier - because Peter doesn't do difficulty levels or expansive briefings - the easily frustrated should give this £17.70 curio a very wide berth. 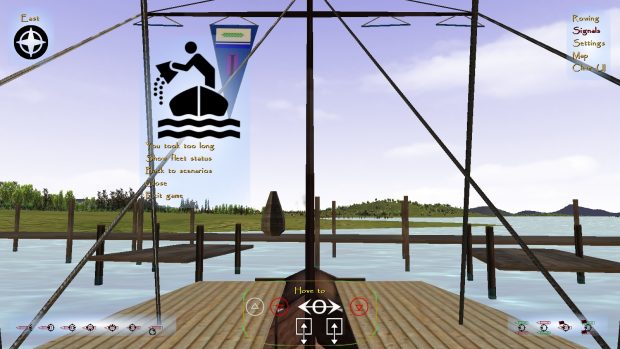 Although it refuses to provide a mission clock during early training jaunts or tell you exactly how long you have to complete some tasks, TC is quite happy to thrust a “You took too long” message under your nose when you're an oar's length from victory. Normally this kind of anti-social behaviour combined with the lack of basic amenities like a skirmish generator would cause me to jump ship PDQ. I've stuck around on this occasion because the premise is so unusual, the prospect of big scraps so tantalizing. 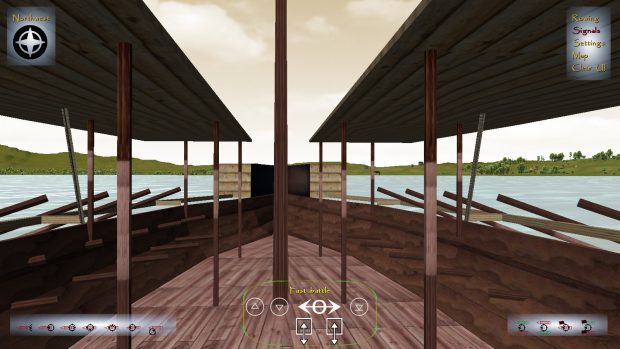 Mare Nostrvm convinced me that hexagons and ancient warships (any warships?) aren't natural bedfellows, and that trireme titles neglect spectacle at their peril. TC's visuals might be rough-hewn, its crews and troops invisible, but the first-person views and quirky movement mechanics give the game flavour and ambience that Turnopia's valiant effort sorely lacked.

Via four clickable on-screen controls (strangely, there's no sign of keyboard shortcuts) a vessel's heading and speed can be controlled quickly and simply. Movement only starts getting complicated when you unfurl the rowing GUI and start experimenting with de-syncing your port and starboard oarsmen. By dragging oars on one side and deploying the usually-raised-to-maximise-speed second rudder, turns can be tightened considerably. Tests* have proved that simulated differential steering is Huge Fun and significantly more satisfying than the ordinary kind. What a pity Peter won't let me try out my manoeuvring skills in a big battle until I've jumped through all those hoops. 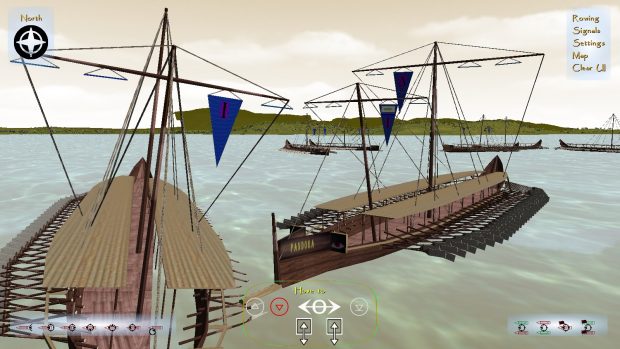 I'm also looking forward to testing the novel fleet command system under battle conditions. Unsurprisingly, the man who pioneered the use of realistic command mechanics in computer wargames doesn't let you morph into a seagull whenever you please and direct subordinate ship squadrons RTS-style. Shifting between the three formation types - periplus, diekplus, and kyklos - is done with signal flags. 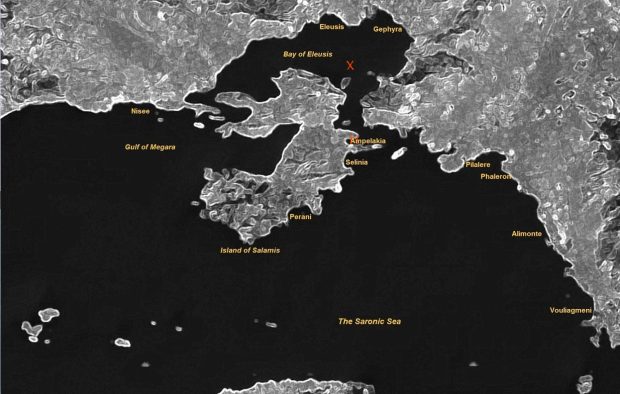 Other modelled subtleties includes wind effects and coastal shallows. Unfortunately an opaque Aegean makes the latter almost as hard to gauge as the physical condition of your rowers. For no obvious reason, the game fails to provide any form of fatigue meter, preferring to abruptly cut your speed to 'cruise' the moment some hidden variable hits a threshold.

Pedantic, inflexible, and at times genuinely mysterious (My last attempt at 'one-on-one', an introduction to patrolling and combat, ended when my ship refused to move after ramming the lone enemy. Was I entangled? The big gap between prow and planking suggested not.) Trireme Commander is a real curmudgeon. Only pride, the prospect of Salamis, and the pleasure of three-point-turns in a 170-oar leviathan, keeps me playing. Expect some battle tales and busier screenshots in next week's column.