Bomber Crew is warming its engines and waggling its flight control surfaces. On Oct 19th, if all goes to plan, a green Very light will fizz heavenward and anyone with £TBA to spare will get the chance to find out whether Runner Duck's 3D-FTL-with-Lancasters is W for Wizard or S for Shite. The evening I've just spent with the single-mission sliver of preview code suggests the game will generate far more compliments than complaints, but won't fully satisfy fans of No Moon Tonight and B-17: Queen of the Skies. 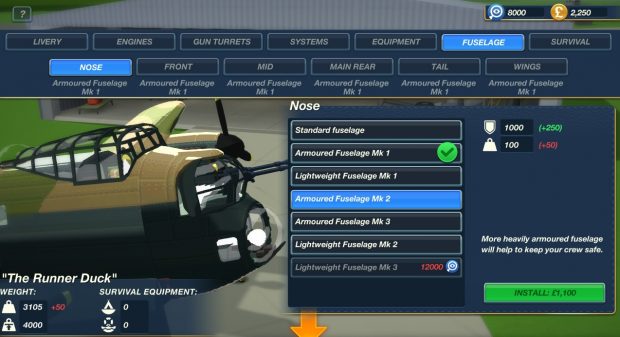 In the press tempter you're asked to take your Avro bomb-bus to occupied France, photograph a couple of suspicious structures, crater an airfield, and return in one piece. The sortie begins with an aircraft and crew customisation phase that made me harrumph like a retired colonel in a slow-moving Post Office queue. 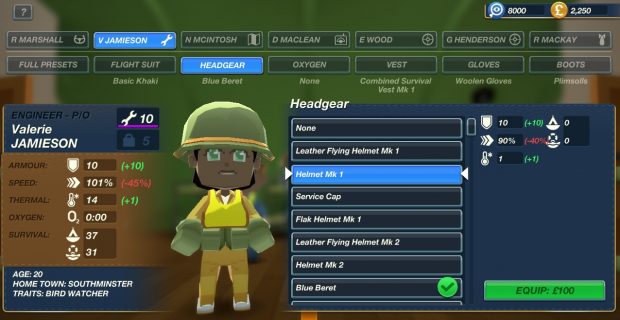 Tweaking everything from crew headgear to the armour thicknesses on specific fuselage sections in order to achieve double-edged, ahistorical performance gains? I guess some will enjoy the faffing, but to me it's simply a tiresome illusion eroder, a cheap, discordant way of adding interest to inter-mission intermissions. 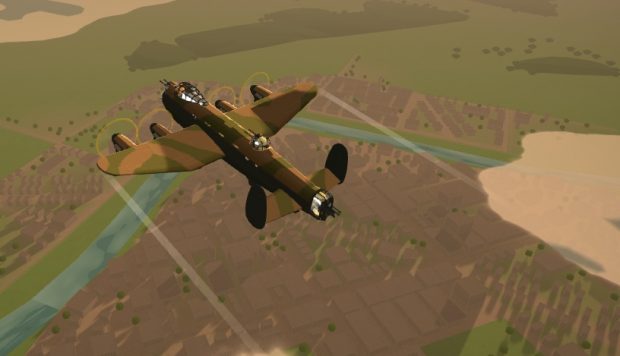 You don't actually 'fly' the plane or operate the turrets yourself. Your heading is set by switching to a zoomed 'tag mode' and placing a nav marker in an appropriate sector of sky. Combat is handled in a similar manner. When bogey blips appear on the GUI radar it's up to you to quickly switch to tag mode, scour the sky, and centre each bandit in your reticule for a few seconds. Once tagged, Luftwaffe interceptors are automatically peppered by turret gunners...

...assuming those turret gunners are still conscious, and haven't quit their battlestations to wield spanners or syringes.

Like FTL, Bomber Crew really blossoms when crewmen start keeling over and things start catching fire and spewing sparks. The preview mission is no cakewalk and a dramatically condensed map mean difficult choices aren't slow in arriving. One minute you're admiring a Lincolnshire sunset, the next you're looking aghast at a cutaway bomber riddled with holes and awash with calamity. Should Woods try to staunch Taylor's wounds or stay in the mid-upper turret just in case those Bf-109s return? Should hard-pressed Henderson repair the hydraulics or oxygen system first? If I order Walker to fly a corkscrew manoeuvre in order to shake-off that horribly persistent enemy ace, will Mackay, currently out on the wing fighting an engine fire, be able to hang on? 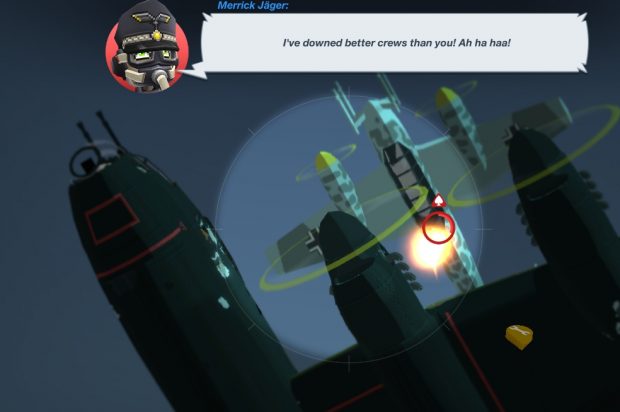 My first three trips to France were one-way, a talkative cove in a balletic Bf-110 downing my lumberer as, job done, it headed for Blighty. With a little help from some radioed-up Spitfires, I eventually made it home on trip #4, the relief of a successful automated landing slightly marred by disappointment that there was no anxious reception committee waiting to greet me. 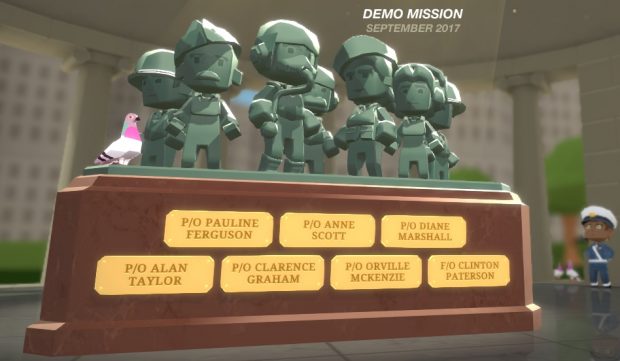 KIA crew are commemorated with statuary on the main menu screen. It's a nice touch but I remain uneasy about BC's tonal timidity, its eagerness to draw on the Bomber Command war experience without actually acknowledging that experience directly. It looks like Runner Duck have succeeded in creating something novel, exciting and approachable. What aviation anoraks like myself may well rue is that Bomber Crew could have been educational and powerful too had a few bold design decisions been taken in the early stages of development. 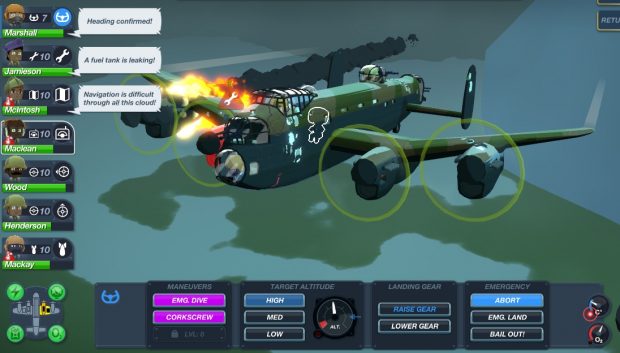 I've discovered an interesting bit of small print in my RPS contract. On National Ampersand Day I'm allowed to review anything, not just games. A less responsible wargame/sim correspondent would use this freedom to Wot I Think the completely irrelevant. You'd get appraisals of biscuits... clouds... carpet stains. Me, I'm going to use it to tell you about a museum which compliments Cold Waters, Silent Hunter, and Shells of Fury play sessions perfectly.

One of a cluster of naval attractions in and around Portsmouth, the Royal Navy Submarine Museum doesn't look all that impressive on paper. Compared to the sizeable war machine collections on show at Britain's premier aviation and armour museums, its selection of four preserved subs seems, at first glance, rather measly. When I handed over my thirteen hundred and fifty new pence yesterday, I was a little concerned I'd have seen all there was to see inside an hour. 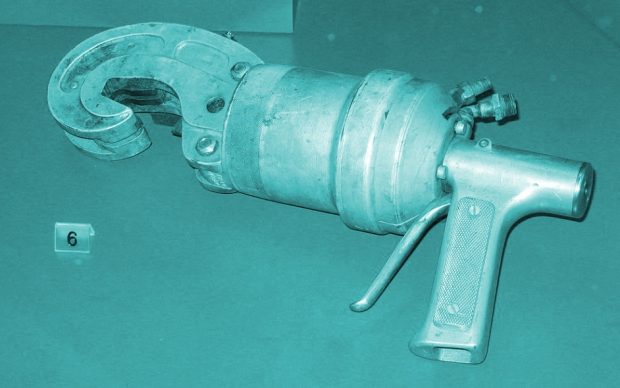 I needn't have worried. While the museum's crown jewels are indeed its beached krakens, a fascinating treasure trove of smaller exhibits meant I had no trouble filling four hours profitably. 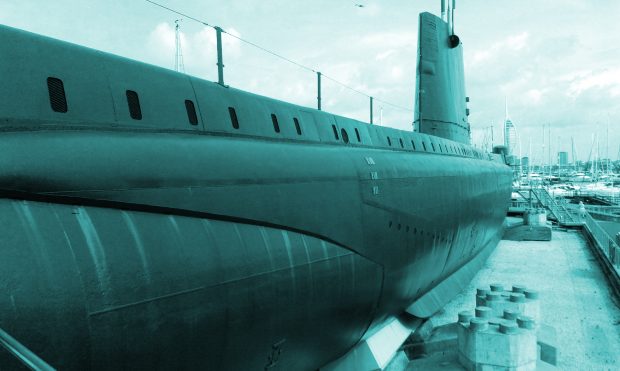 Its massiveness emphasised by its plinthed position, HMS Alliance, an Amphion-class diesel sub launched a few weeks before WW2 ended then adapted for Cold War intelligence-gathering work in the late 1950s, dominates the compact Gosport site. 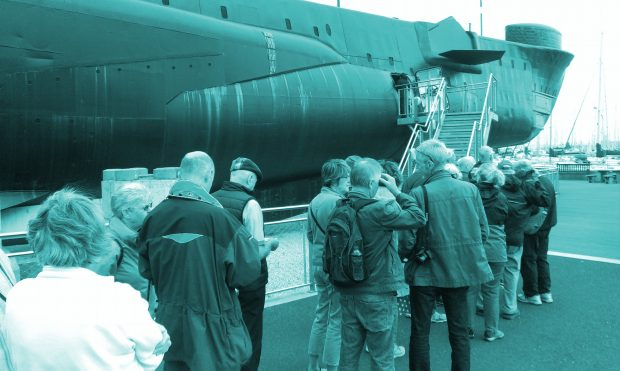 Access to her is by timed tour only, a restriction that starts making sense once you're inside and realise how congested and dangerous the compartments could become if people were permitted to come and go as they pleased. The tour system also means you get to travel the length of the vessel in the company of knowledgeable museum staff with personal experience of serving in submarines. My two guides were both excellent, providing a well-paced stream of anecdotes and technical insights that breathed life into the cramped spaces every bit as effectively as the piped sound effects and artfully scattered period possessions. 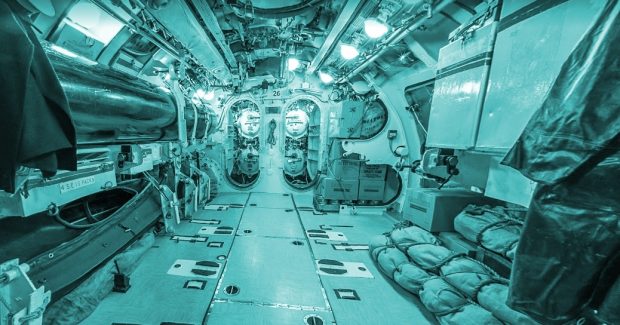 I imagine Dave had explained the olfactory reality* of living aboard an on-patrol submarine and the reasons why sailors chose to serve in such difficult conditions** hundreds of times but there was nothing weary or stilted about his delivery. 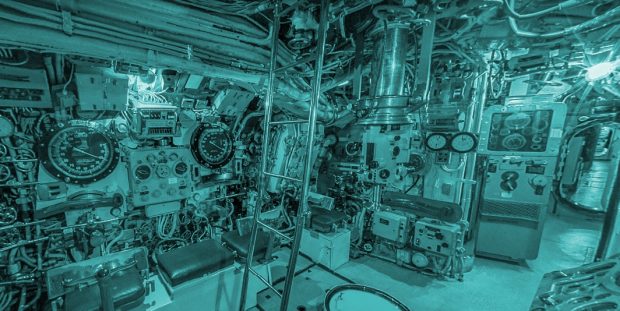 Pimped with ruched velvet curtains and a bit of quilted leather, Alliance's wonderful control room could pass for the Nautilus' with ease. On my next visit I must remember to ask the guide why the Admiralty felt their sub crews needed depth gauges the size of Saxon shields.

X24 might be a fraction of the size of the Museum's Cold Warrior but it has comparable charisma. A four-man WW2 midget sub split into two sections to allow easy inspection of its interior, the exhibit is a veteran of attacks on Bergen harbour and a sibling of the three craft that famously maimed Tirpitz in a Norwegian fjord in 1943. 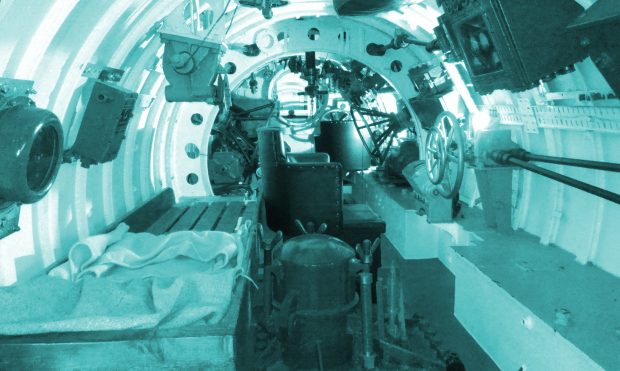 The X-Craft carried no torpedos, relying on large timer-detonated pannier charges jettisoned under or next to targets to achieve their goals. I'm not sure what's more amazing, that men volunteered to serve in these alarmingly basic swimming sarcophagi, or that the ZX Spectrum years passed without anyone producing, a side-scrolling 2D version of Above Us the Waves. 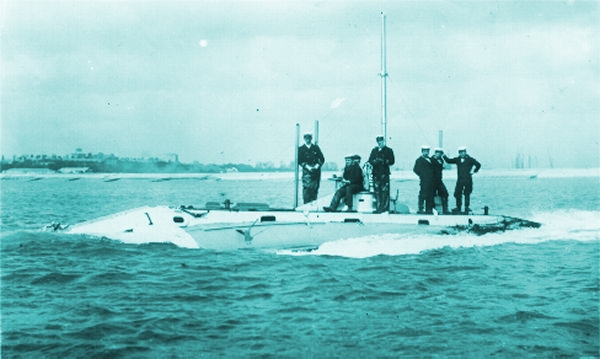 The Museum has Neptune to thank for what is arguably its most extraordinary large exhibit. In 1913 Holland I, the RN's very first submarine, was en route to a Welsh scrapyard when it broke its tow rope in heavy seas, and sank close to the Eddystone Lighthouse. Located in 1981, and raised a year later, it now rests in a purpose-built wing at Gosport, gently warmed by the rust-discouraging exhalations of several fan heaters. Although little remains of the original internal fittings except the single gullet-like torpedo tube, it's hard not to feel privileged standing alone inside this brine-ravaged progenitor. 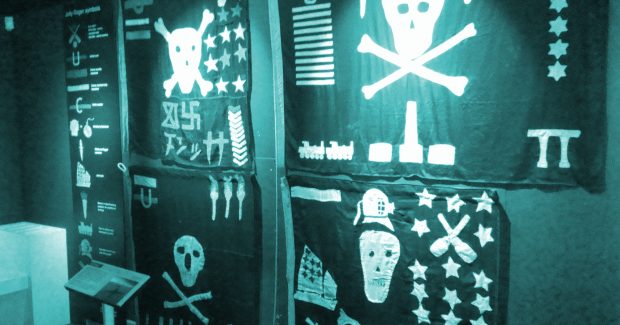 Some of the Museum's most interesting stories are told by its most unassuming artefacts. Wandering the display case-lined galleries in the two-storey main building, there's food for thought – inspiration for games and thrillers - everywhere you look. The symbol-littered 'Jolly Rogers' flown by WW2 RN subs are particularly communicative – every one a pithy summary of risks taken, targets trashed, and dangers survived. 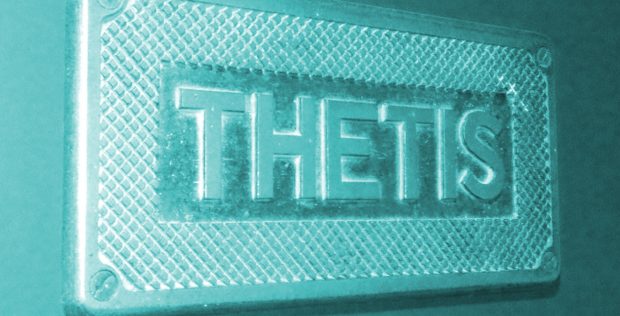 Examining one modest brass nameplate and its associated cabinet and info panel, I found myself reading about Thetis, unquestionably the RN's unluckiest submarine. A few metres further on, in a display devoted to Cold War exhibits, a sad Scalextric controller caught my eye (Ah. Not actually a Scalextric controller - the launch trigger for a Polaris nuclear missile!). Around the corner, via some unobtrusive piped audio, I was introduced to 'The Trade' a wonderful Kipling poem I'd never encountered before. 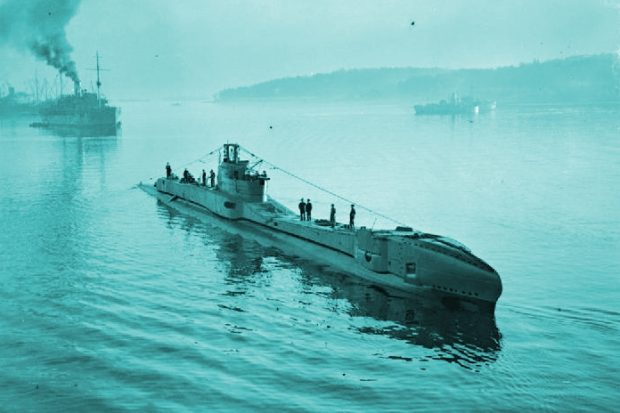 I visit military museums not only to ogle, touch and sniff the war machines I've admired for years through books and games, but to be led down rabbit holes, nudged towards new reading matter, and introduced to people who've lived remarkable yet little-known lives. The Royal Navy Submarine Museum didn't disappoint in this respect. 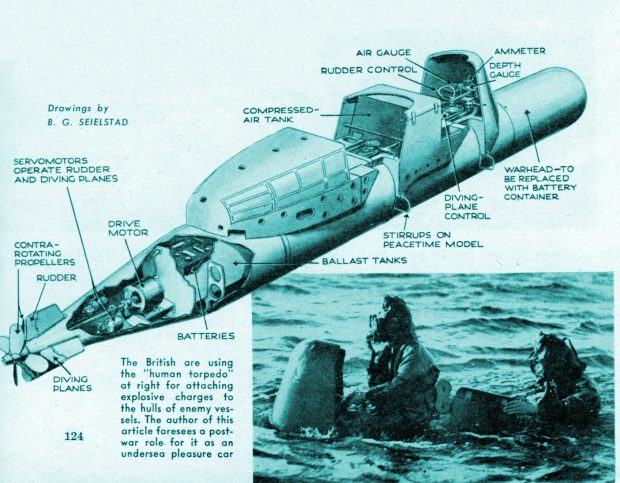 If I had to find fault - and I do, this is a Wot I Think after all - I'd mention that I was a little surprised to find the Museum sim-less (one of the usable periscopes in the main building would make a fab simpit centrepiece) and a tad disappointed not to find a Chariot on display (you'll see steering gear from one and some connected items including the helmet from one of the 'Clammy Death' suits worn by charioteers, but no actual 'human torpedo'). 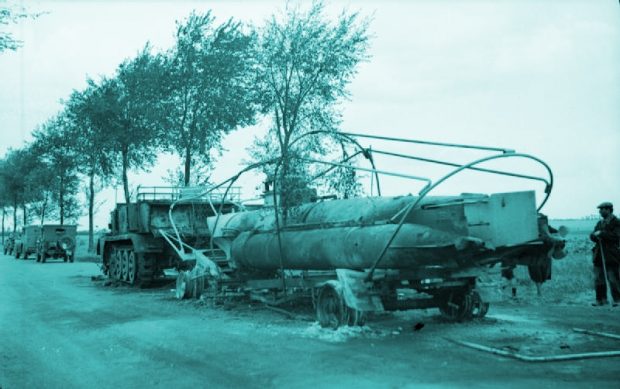 I'd also point out that I left without realising I'd missed "the only fully operational WW2 sub in existence".  Assuming the Biber is still at Gosport , it definitely deserves to be better signposted. 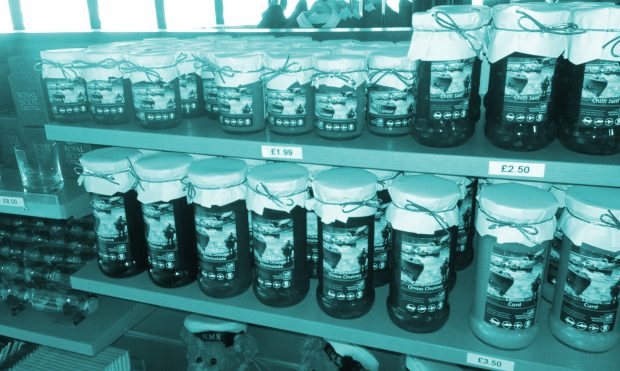 Oh, and I was distinctly unimpressed by the shop's book and model selection. Two shelves of 'RN' jams and chutneys but no Airfix SSNs or copies of Iain Ballantyne's Hunter Killers? Hmm.