When is a bad game not a bad game? When it inadvertently nudges you towards a good game. I began this week playing a very weak HAWXlike coded in Tehran and, via some connected Wikipedia delving and Steam sifting, ended it playing a powerful adventure game set during the Iranian Revolution. 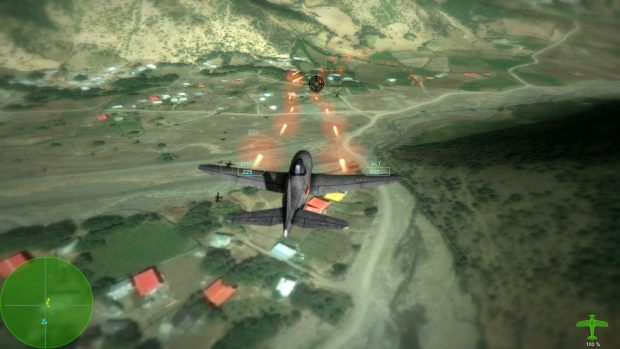 The player-controlled aerodynes in this Iranian-made Unity-powered aerial combat curio refuse to lose speed when they go up-tiddly-up-up or gain it when they go down-tiddly-down-down. Only the jets know the thrill of acceleration and they, clever so-and-sos, double their velocity the instant the Shift key is pressed. 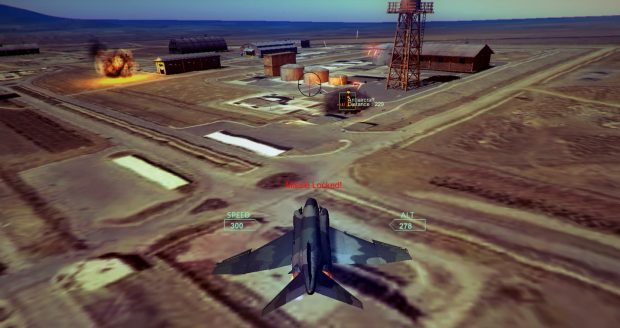 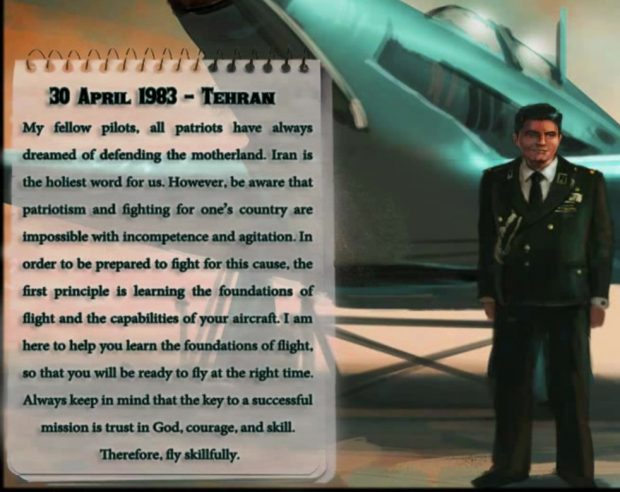 ...and dogfight venues as poky as pigeon lofts.

Fly for more than 40 seconds in any direction at max speed and the game's most ruthless opponent recommends you return to the 'war zone'. Ignore Perimeter Pete's brief countdown and the swine doesn't turn your warbird around - he remotely detonates the sausage of Semtex that's been placed next to your fuel tank to discourage wandering. 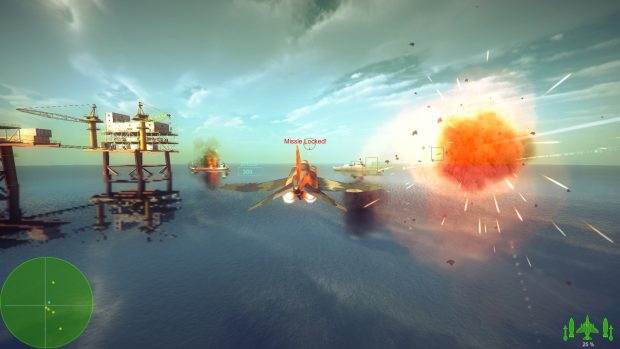 Tough missile lock conditions, agile bandits, and a single difficulty level ensure the line-astern ten-sortie campaign has the capacity to frustrate. The kindest thing I can say about Squadron is that its unusual premise - seventy-five years of Iranian Air Force history under one roof - means there's a fair chance your first stop after rage-quitting mission #5 (an Iran-Iraq War sortie involving a Kharg Island offshore oil platform and a fleet of seemingly unsinkable Iraqi gunboats) will be Wikipedia. 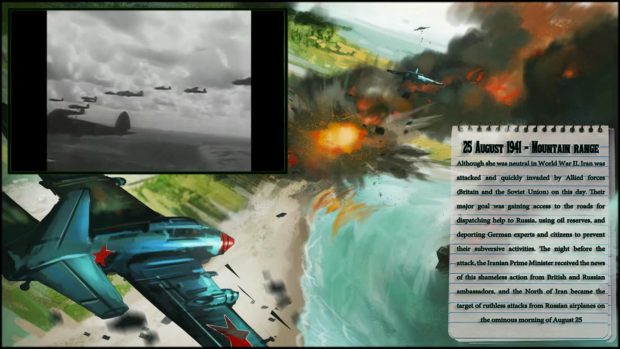 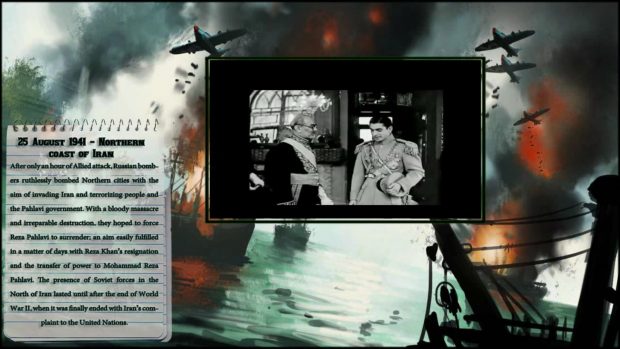 The game's depiction of the profoundly dubious/pragmatic 1941 Anglo-Soviet Invasion of Iran might be wildly inaccurate* but I'm glad it exists. Curious about briefing claims and sortie implications, I found myself following the white Wikipedia rabbit down a hole that eventually led me to The Cat and the Coup and 1979 Revolution: Black Friday.

*Squadron ignores the fact that the Imperial Iranian Air Force was equipped with biplanes in '41 and was swiftly and painlessly neutralised by the RAF and VVS. 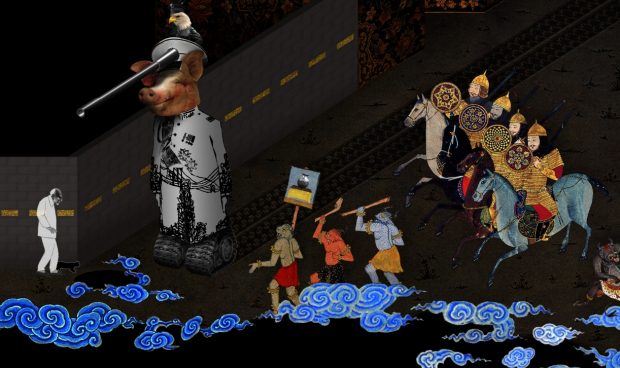 Definitely due another mention on RPS, The Cat and the Coup is a short free puzzle game inspired by one of the Cold War's most cynical acts. You control the mischievous moggy of Mohammad Mosaddegh, a reforming Iranian Prime Minister removed in a 1953 coup engineered by the US and Britain. 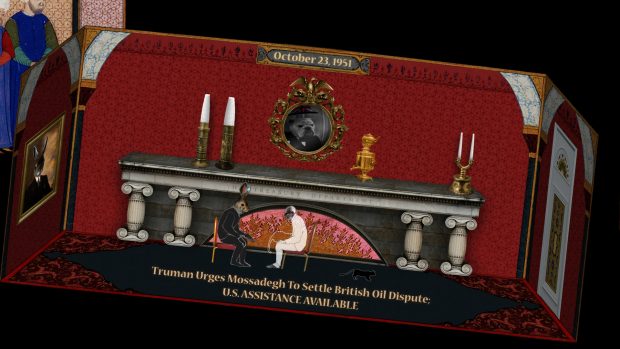 Mosaddegh had made the mistake of nationalising Iran's oil industry thus depriving the UK of one of its most valuable overseas assets. 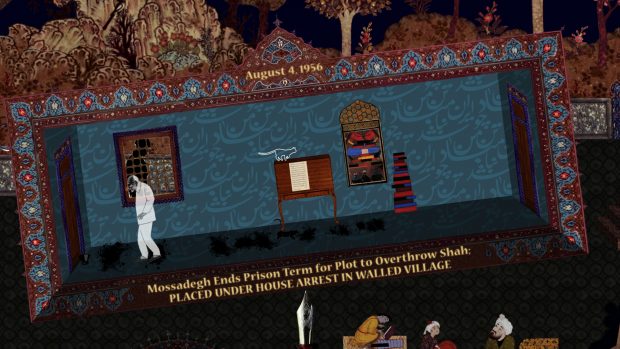 A pawed clock resurrects the recently deceased and deposed PM, and then carefully timed scampering and cunning object manipulation sends him tumbling downwards through a series of eye-catching collages and seesawing rooms that initially make little sense.

The reward for your feline meddling is a memorable final sequence in which the descent is reversed, the game revealing itself like a peacock unfurling its tail feathers. 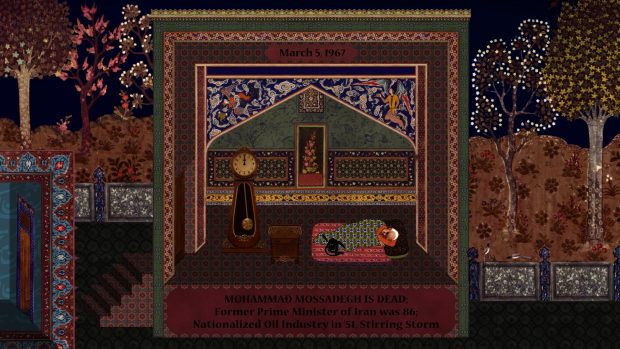 Far more subtle and thought-provoking than the newspaper political cartoons it sometimes resembles, The Cat and the Coup is a lovely thing. How wonderful it would be if it was one of a family of similar titles. If only more devs handled history as delicately and poetically as Peter Brinson and Kurosh ValaNejad. 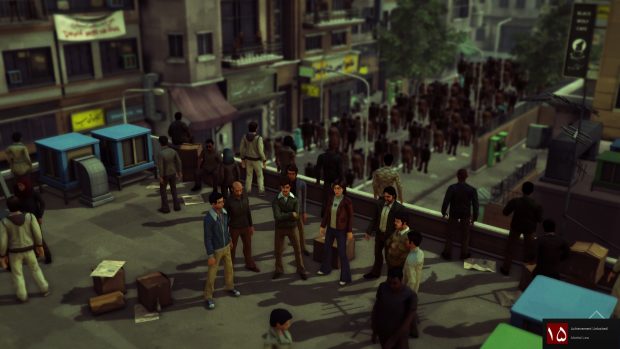 What's more important to you – democracy or the safety of your family? Is the use of violence justified when seeking to overthrow a repressive regime? Should a photojournalist allow his work to be used for political purposes? 1979 Revolution: Black Friday asks some very difficult questions and does so without ever feeling didactic, reductionist or contrived. 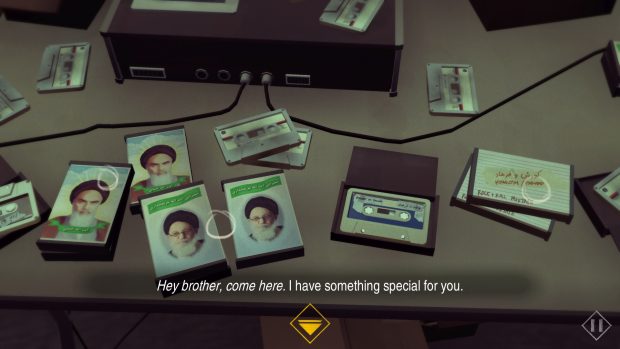 A brilliantly executed adventure game stuffed with drama and believable characters, it's clearly made by people intimate with Iranian culture and fascinated by the events that transformed Iran in 1978-79. 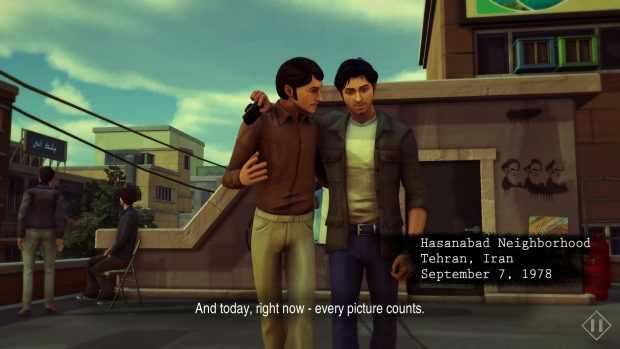 You play Reza Shirazi, a young photographer drawn into the heart of the anti-government movement by fate, friends and family connections. It's a confusing, dangerous place to be. Liberals, communists, and religious fundamentalists all want the Shah removed but vehemently disagree on the way to do it and what path the country should take once the hated monarch and his Gestapo-like secret police are gone. 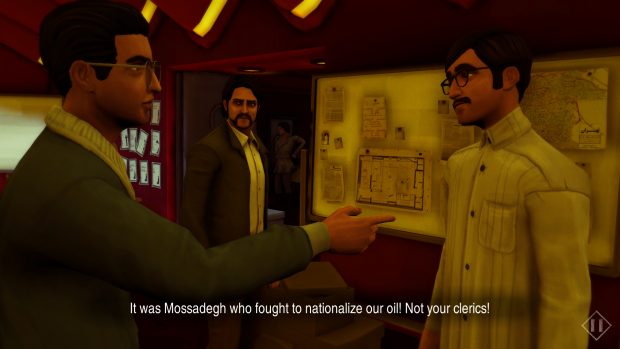 The revolutionaries you photograph and mingle with are driven and passionate. They're often fearful too. 1979 Revolution is awash with paranoia. 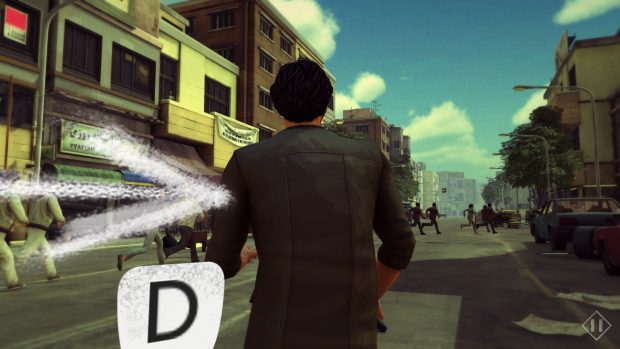 Sometimes that paranoia manifests itself in violence. Reza can perish at various points in the plot. Usually you save him through well-timed WASDing or by furiously mouse-clicking a QTE icon (happily Quick Time Events are employed sparingly). Occasionally he can talk his way out of trouble. 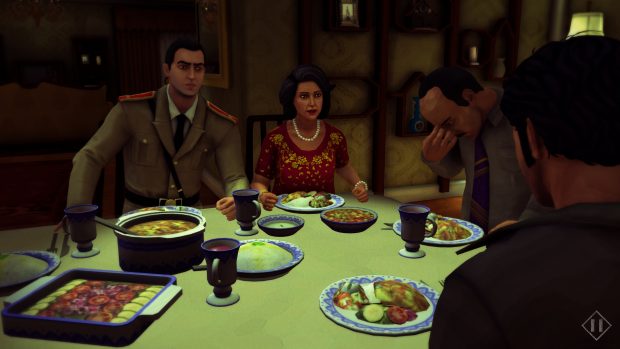 As dialogue shapes most of your relationships, it's splendid so much of it is so well crafted and delivered. I can't remember a moment where a cliché, clumsy phrase, or piece of poor acting pops the story's soap bubble. 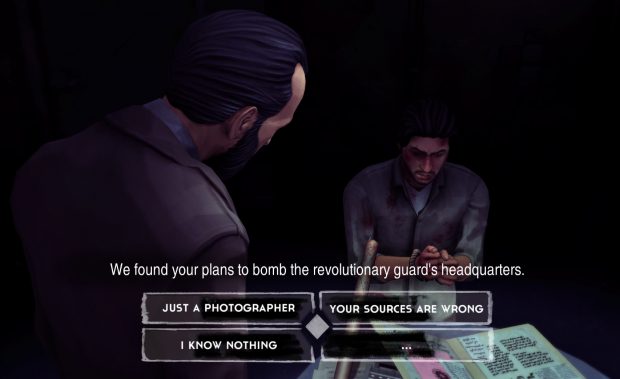 The closest thing to a stock character is a sadistic cattle prod-wielding interrogator. Elsewhere distinguishing friend from foe, the right course of action from the wrong one, is seldom easy. 1979 Revolution never patronises and, like a good novel or movie,  knows when to stop babbling and push on. Only once did I feel I was being pushed into a corner unfairly. 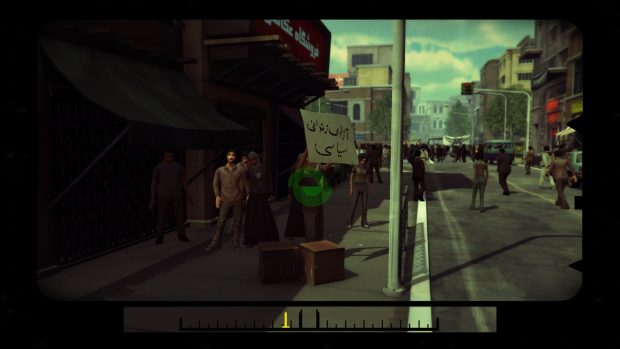 The subtlety of the decision-making and a murky embedded whodunnit encourage replay. I plan to return to iNK Stories' version of Tehran at some point to right a wrong I unwittingly committed on my initial playthrough and to reacquaint myself with a game that captures the excitement, energy, and anxiety of revolution uncommonly – incomparably? - well. 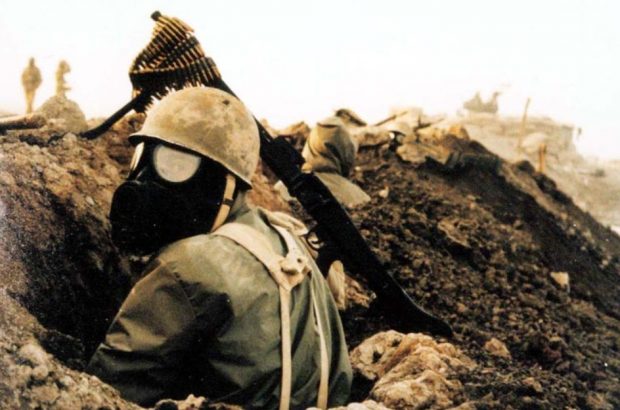 The infamous eight-year war with Iraq that followed hot on the heels of the Iranian Revolution crops up rarely in sims and wargames. Its reputation for WW1-style slaughter and stalemate means it's not a conflict I'm naturally drawn to but one of the hexy treatments in the works at present might change my attitude. 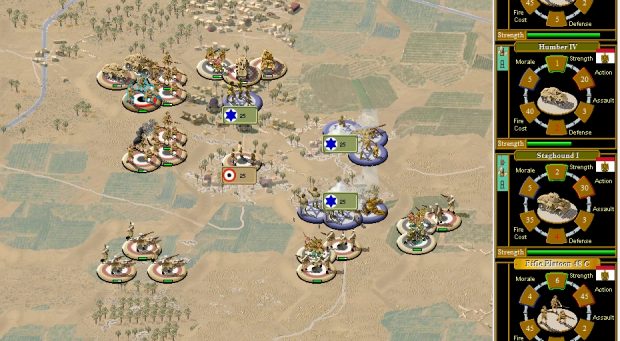 Jason Petho and the Campaign Series Legion are planning to swell Campaign Series: Middle East with Iran-Iraq War content at some point next year. The expansion will take the form of commercial DLC. As the traditional yet likeable base game is scenario-rich and rigorously researched, I'd be surprised if the add-on was small or slapdash. Will the realism extend to poison gas and child soldiers I wonder? 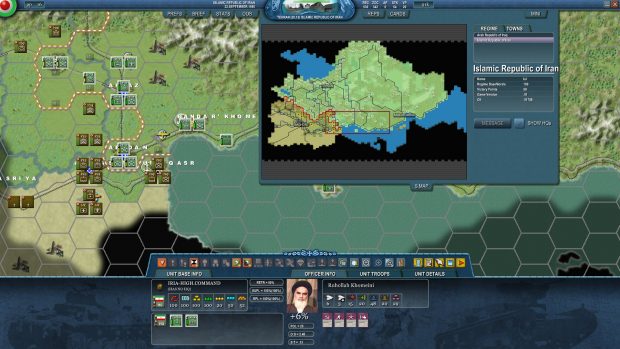 Those after a less fragmentary recreation of a conflict known as The Imposed War in Iran (An Iraqi invasion of Khuzestan began the carnage) must be cheered by the imminence of The Operational Art of War IV (If TOAW4 ships without an Iran-Iraq War simulation then fans are sure to address the deficiency quickly) and the early promise of this scenario for the free - assuming you own one of the DC series - Decisive Campaigns Community Project.