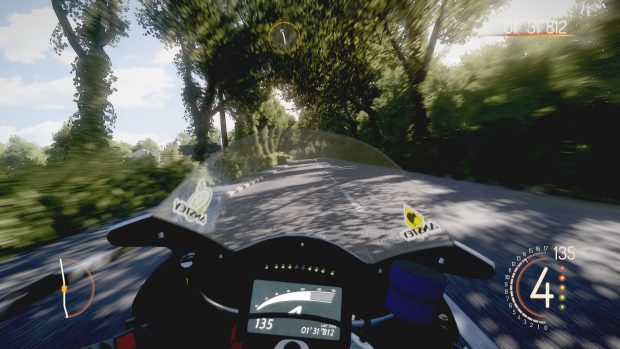 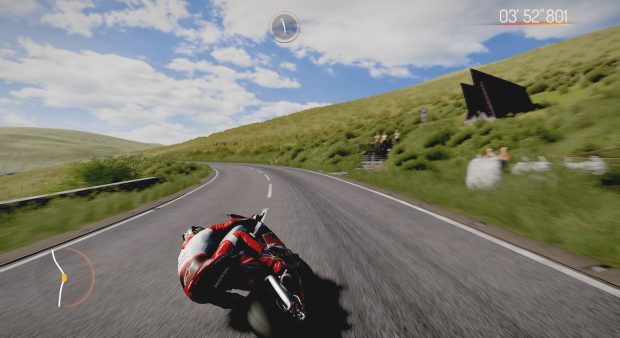 Having spent much of yesterday smudging trees and sneering at 30mph speed limit signs, I can only echo Martin's sentiments while raising a few minor points of my own. 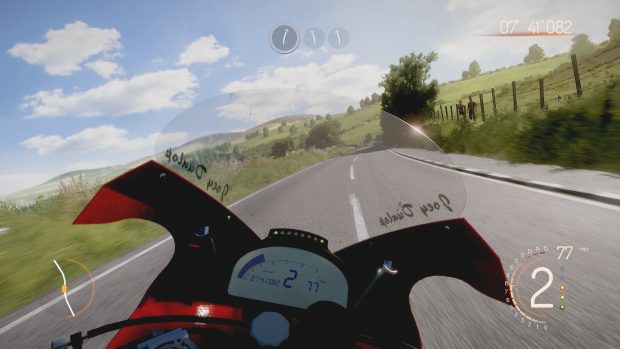 Point 1. Manx cats must be extremely intimidating felines because my mouse refused point-blank to get off the ferry in Douglas. I was hoping developer Kylotonn would let me use my desktop palm pebble for leaning into corners, accelerating, braking etc. but the swines won't even let me use it for navigating menus. Keyboard control is just about practical, assuming you're willing to ride with a few of the assists active, but you'll need a wheel or one of those clumsy gamepad gizmos to negotiate corners with anything resembling panache. 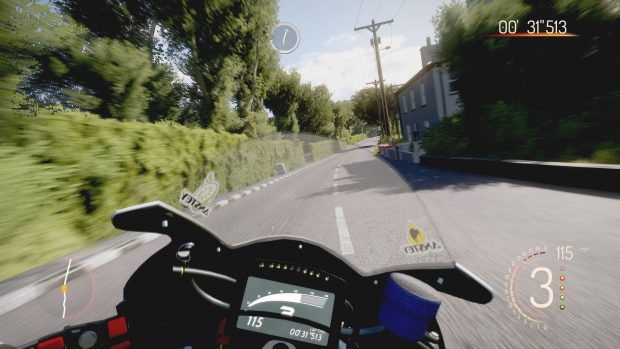 Point 2. If TTIoM is to be believed you're as likely to encounter a bump or pothole on a Manx highway as you are to encounter a fox or badger in a Manx wood. While we mainlanders resurface our roads with stale flapjack steeped in old engine oil, the sensible folk on Ellan Vannin use a mithril-granite-rubber compound that Monroe must hate with a vengeance. Although Kylotonn have captured the ambience of the 38 mile, 264 corner Mountain Course brilliantly, the flawless, linoleum-like road surfaces and extremely kind kerbs may disappoint real masochists. 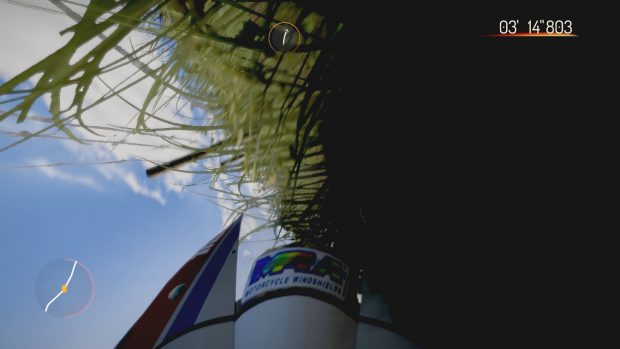 Point 3. Oddly, Martin makes no mention of TTIoM's diverse and beautifully modelled creepy-crawlies in his review. Because the various mini-beasts are extremely difficult to identify once they've exploded against your windshield, I like to stop occasionally and admire them pre-detonation. 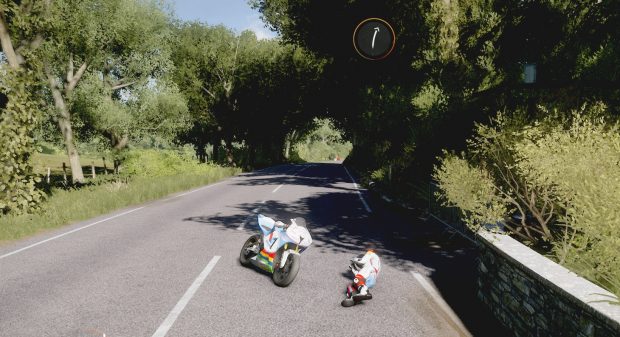 ^ Here I am inspecting a rather handsome elephant hawk-moth caterpillar. 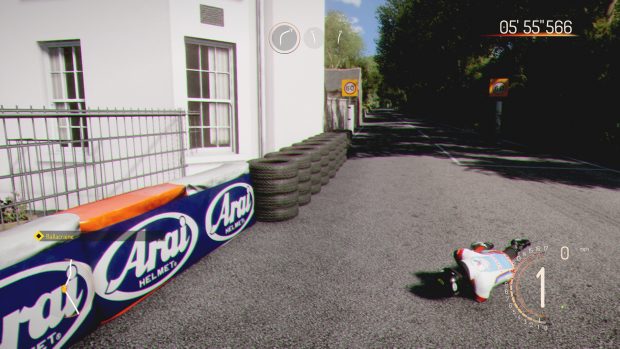 ^ I was passing this dwelling when I happened to notice a female black-headed cardinal beetle crossing the road.

^ Lap-record smashing can wait. If I'm not very much mistaken, that's a wart-biter bush cricket! 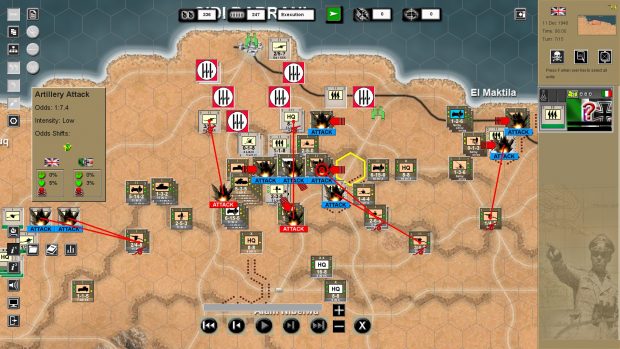 Brian Kelly's Desert War is ecru in every sense of the word. A symphony in beige, it's wonderfully refined in parts and horribly raw in others. Simultaneous turn resolution (WEGO) and a relatively unusual setting give it zest and character not often found in operational hex fare, but a preponderance of overwhelming scenarios and a sluggish, gullible AI mean there won't be much fawning in the next ten paragraphs. My message to Mr Kelly and his team: “Buff or I'm dun”. 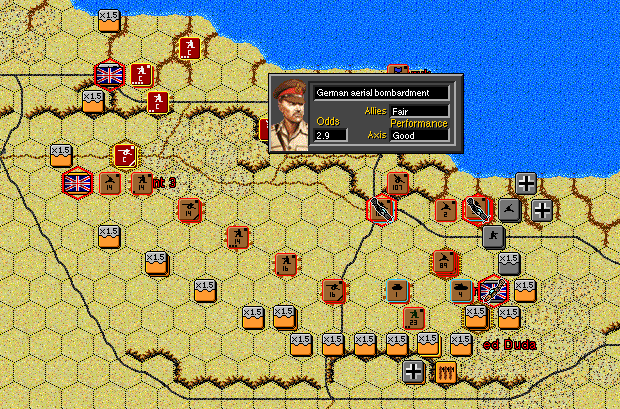 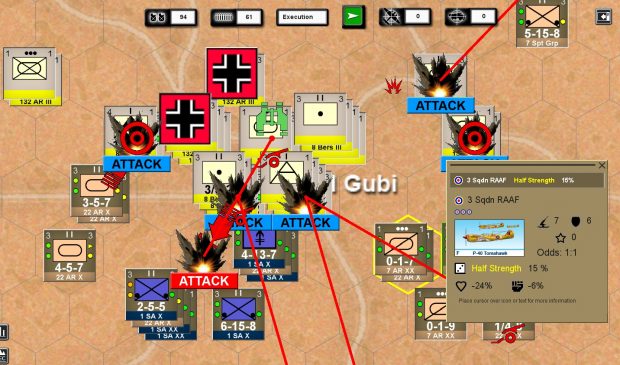 The WEGO approach works on an operational level for the same reasons it works on a tactical one. Because flailing fists sometimes collide with thin air or other flailing fists rather than faces or torsos, and because players can't intervene the second a plan starts going awry (as in Combat Mission you're a helpless observer during turn resolution movie screenings) WEGO clashes often have a ragged, recalcitrant quality that their metronomic IGOUGO counterparts lack. 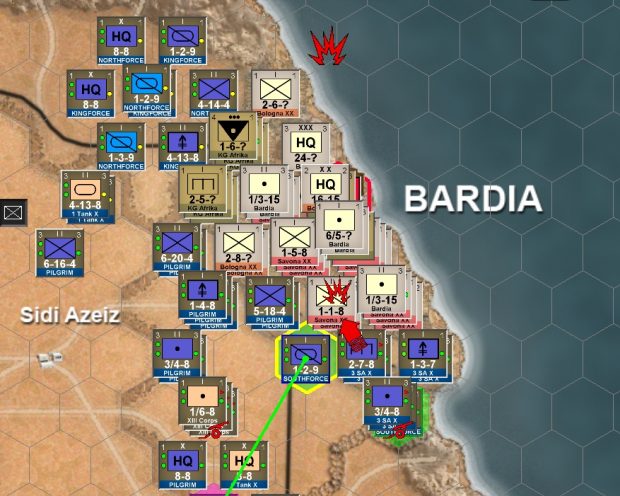 In DW that pleasing, history-mimicking scruffiness is accentuated by unforeseen traffic jams in hectic hexes, and unpredictable order implementation delays caused by failed command-and-control checks. There's no guarantee a weary, stressed, out-on-a-limb unit will end a turn in a destination hex, even if the path to that hex is enemy-free and uncluttered. 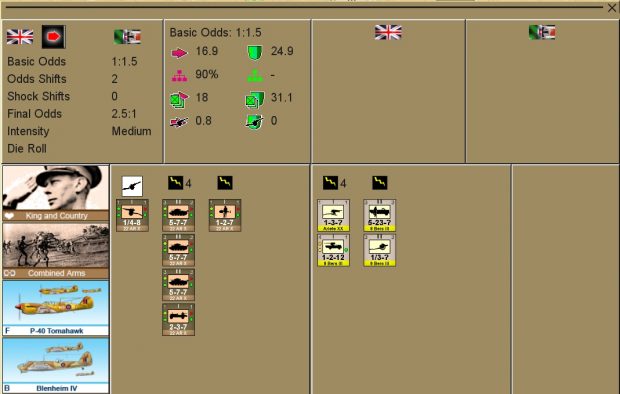 Thoughtful, history-rooted, and, for the most part, easily grasped rules and mechanisms litter DW like the WW2 landmines that, to this day, litter North Africa. When the game isn't modelling Clausewitzian friction, it's elegantly acknowledging the importance of logistics in ops like Crusader and Battleaxe, or the significance of recon and air superiority. Attack mechanics encourage clearly delineated brigade boundaries and careful prioritisation. You can favour certain formations by temporarily boosting their supply level (the actual supply process is abstracted) and greatly increase the chances of an assault succeeding by manually assigning your limited artillery, air and command assets to the relevant hex. 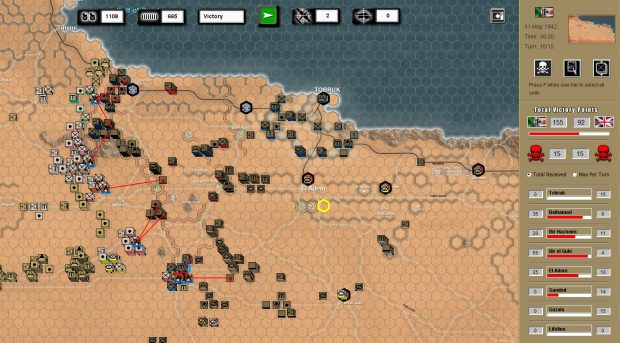 Patient, tidy, systematic wargamers will prosper in DW. Impatient, lazy, or disorganised ones may struggle thanks to the glut of grandiose scenarios and the disappointing dearth of delegation options. In the V for Victories and their relatives if you ever felt overworked or overwhelmed you could ask the AI to move units for you. In DW there's no such option and no group/formation movement capability either. Faced with personally overseeing 200+ units every turn (at least half of the game's dozen scenarios are on this scale) – many of which are sure to be semi-hidden in counter stacks – on occasion my resolve has bounded away like a frightened jerboa. 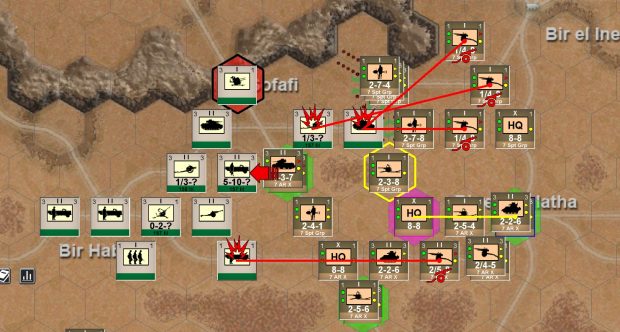 Not for the first time a wargame fabricator has failed to adequately provision fainthearts and shortburst strategists. The section in the manual that suggests inexperienced editor users should “start small” before listing five bijou North African scraps that would make good scenarios, just rubs salt into the wound. Those skirmishes should have been in from the start. 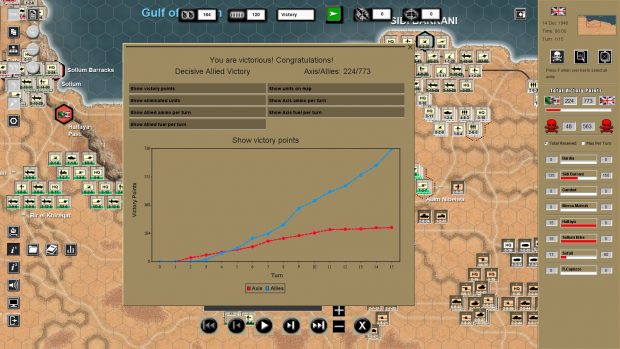 As crafting a totally dynamic AI capable of simulating both the brilliant, rip-roaring Rommel and the unimaginative, reluctant Graziani would be far from easy, it's hard to criticize Brian for opting for semi-scripted opponents (Units are endowed with some tactical initiative, but the formations they're part of follow branching 'if-then' plans designed by the scenario author). What I will gripe about, however, is the quality of many of the hand-made plans.

In the majority of the battles I've tried so far, the enemy has seemed lethargic and short of ideas. More worryingly, in some scenarios it has demonstrated naked incompetence. Tasked with recreating this masterly Allied thrust in the latter stages of Operation Compass, the computer refused to commit 70% of its forces, handing me victory on a plate. Given responsibility for the Allied assault at Bir el Gubi, it was kind enough to leave its vital supply lines completely unprotected. Playing as Neil Ritchie in 'Gazala – The First Five Days' it dozed while I snatched a series of crucial rear-echelon VLs with the kind of cheeky roving armoured car columns that most other wargame AIs would have squashed like bugs. 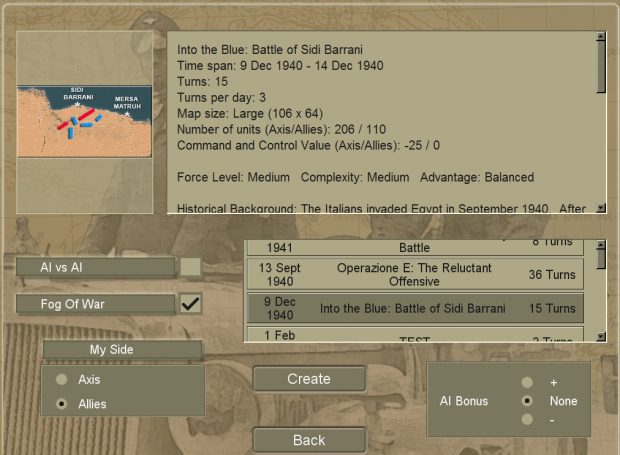 When £31 is only buying you twelve scenarios – admittedly all playable from two sides and usable in PBEM or hotseat MP – I think it's reasonable to expect every one of those scenarios to offer either competitive or plausible artificial opposition. Brian has promised to sharpen plans in response to player feedback. The uncharitable may ask why the honing wasn't done prior to release. 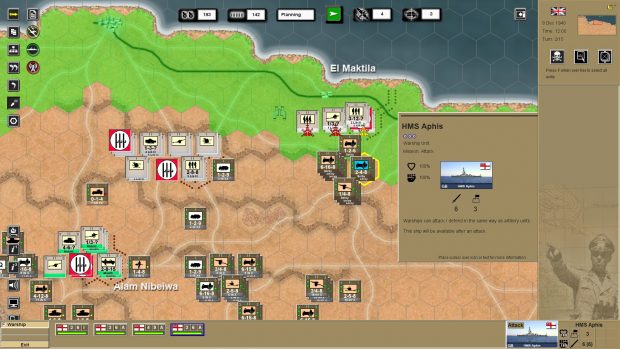 Novel, logical, and refreshingly deep, Desert War 1940-1942 deserves a decent single-player opponent. When I eventually reinstall the game, as I know I will, I hope to meet that opponent and come to respect him, ideally while playing an expanded selection of sub-100 unit scenarios.

Desert War 1940-1942 is available now from Matrix Games priced £31. There are currently no plans for a Steam release.