Welcome aboard this Train Sim World 2 Bakerloo service from Harrow & Wealdstone to Elephant & Castle. As the London Underground employee who should have been driving the train is a trifle indisposed following an encounter with a chloroform-soaked flannel, I'll be whisking you into the heart of the Big Smoke today. 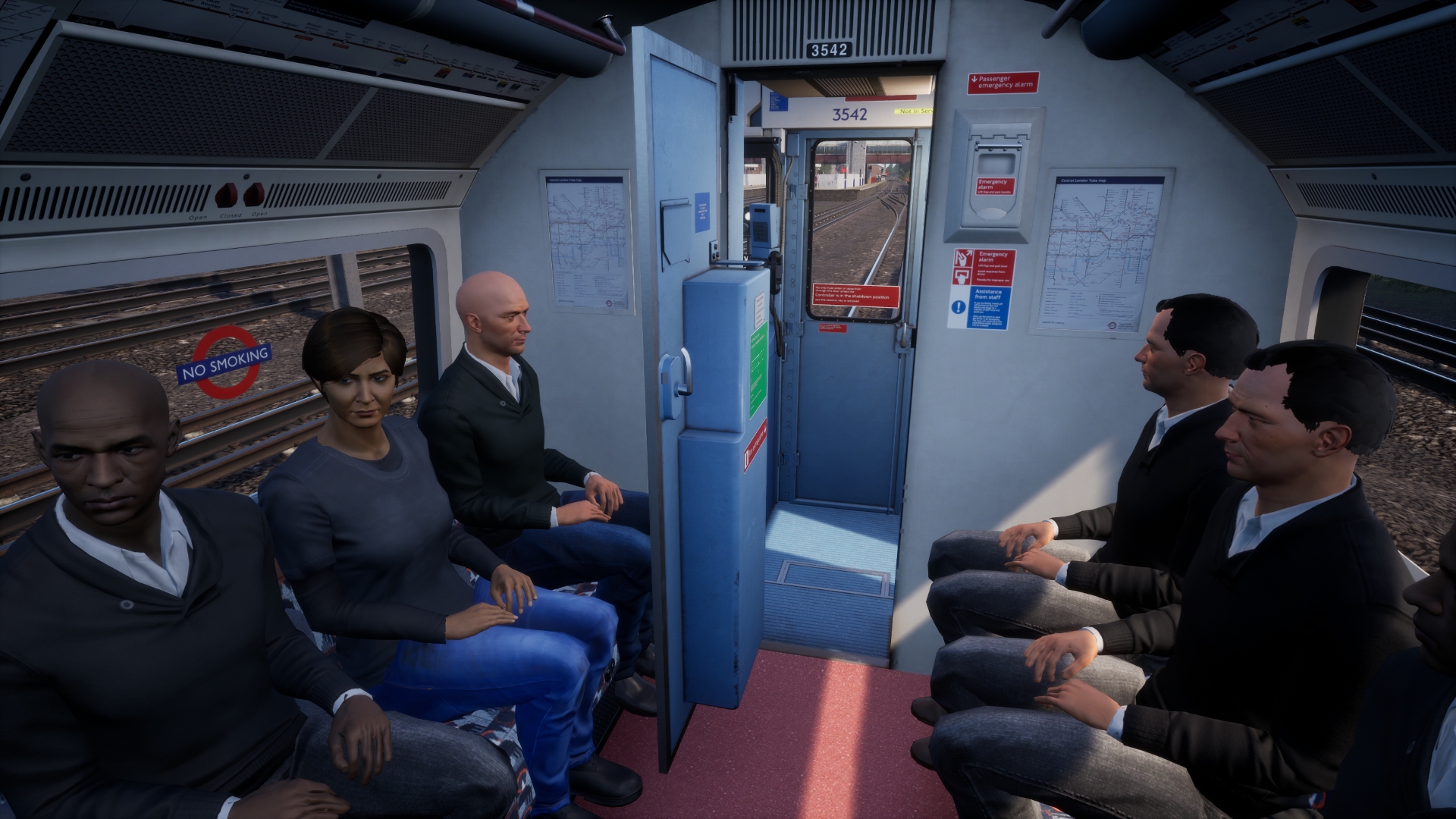 Seeing as no-one seems to have brought reading matter, digital entertainment devices, knitting, or tongues with them, and Dovetail's scenery is somewhat lifeless, how about I leave the cab door open during the trip and regale you with topographical tidbits as I drive? 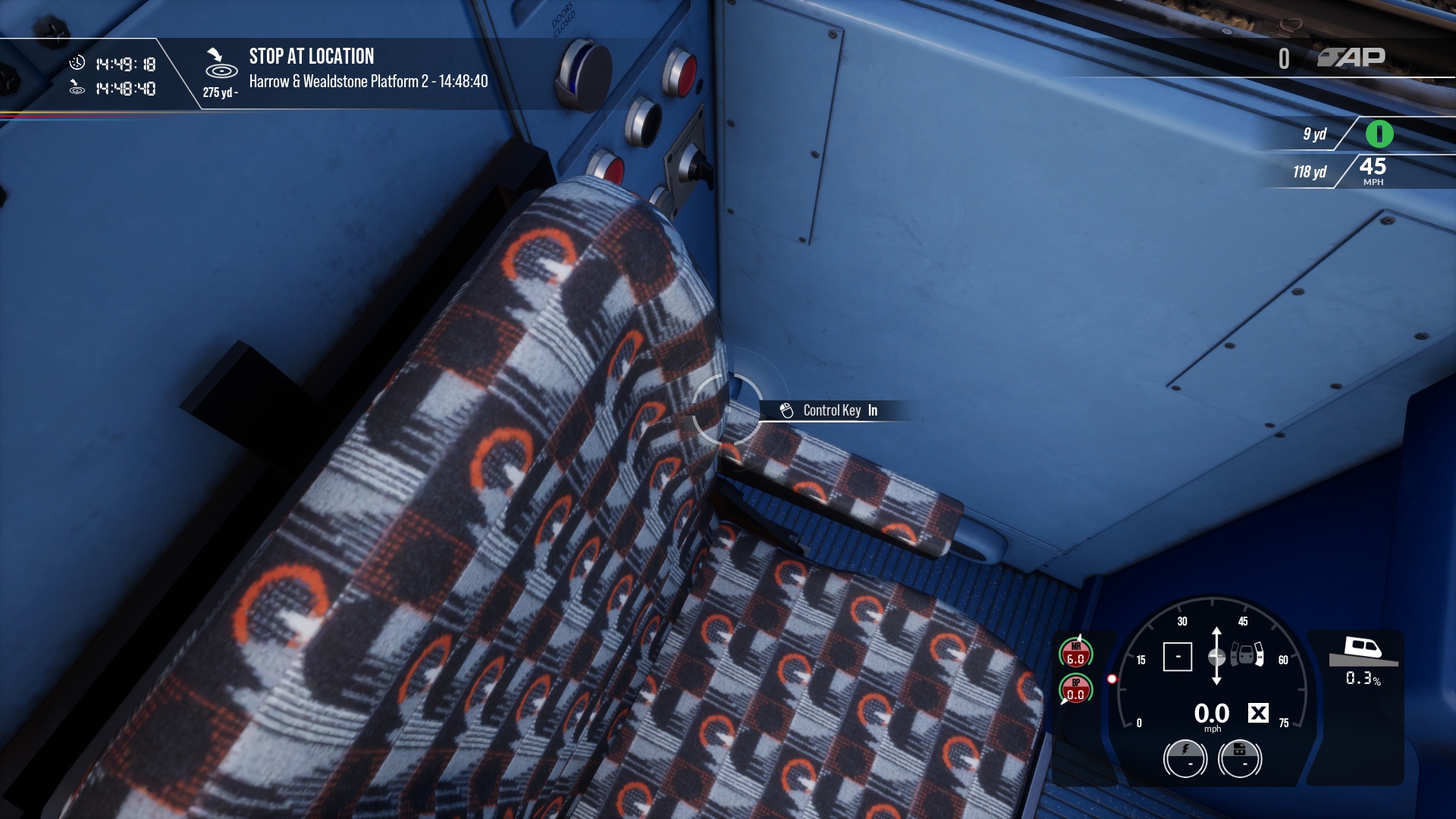 Bear with me. In order to ready this veteran electric multiple unit for use (1972 Stock is the oldest currently in service on the London Underground) I just need to insert the control key down here, pop the direction selector handle into the controller on the right (the controller on the left is a combined brake/throttle/dead man's handle) and flip a few light switches on the other side of the cab. 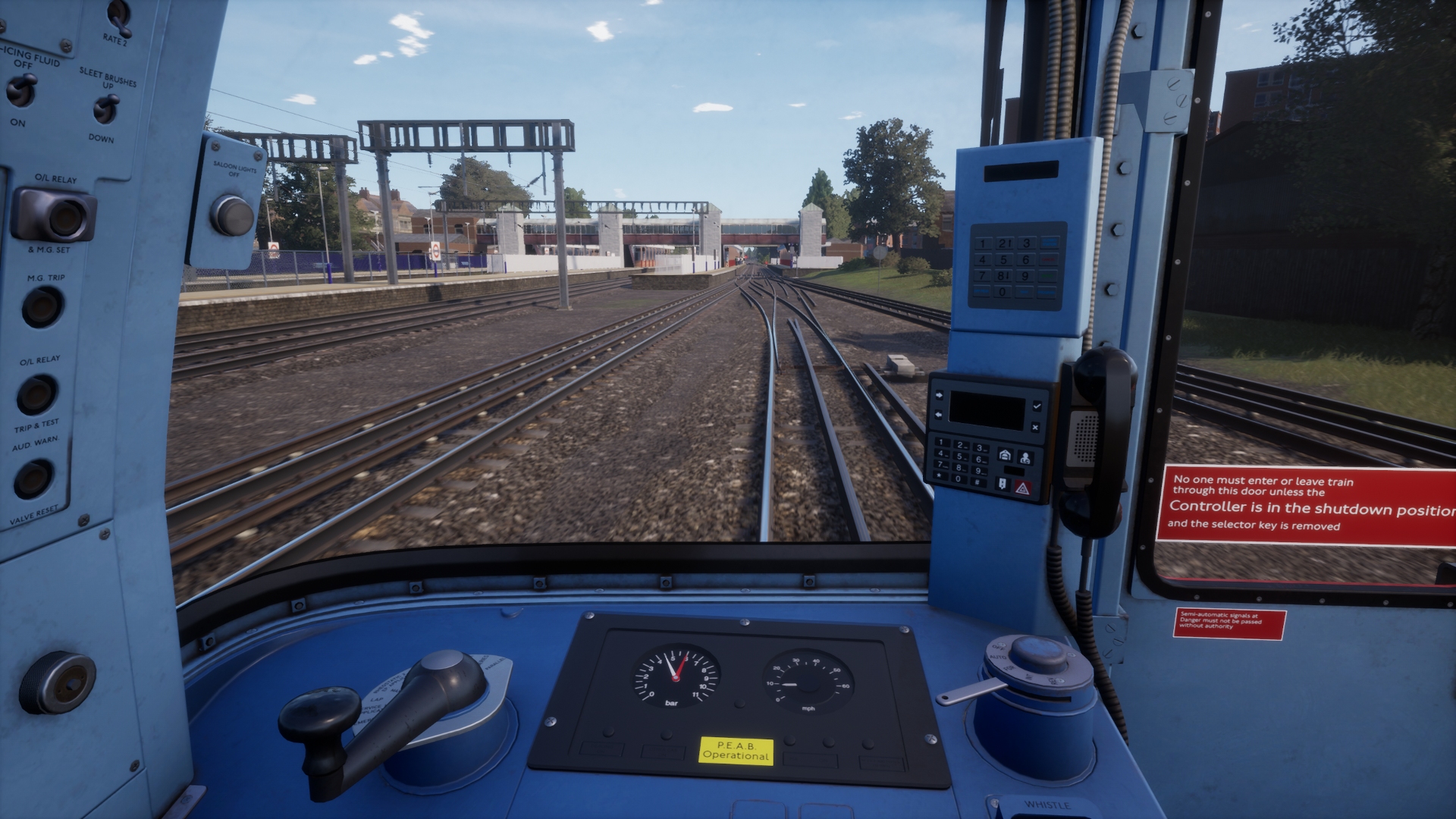 Right, I think we're now ready to trundle the couple of hundred yards to our first stop. 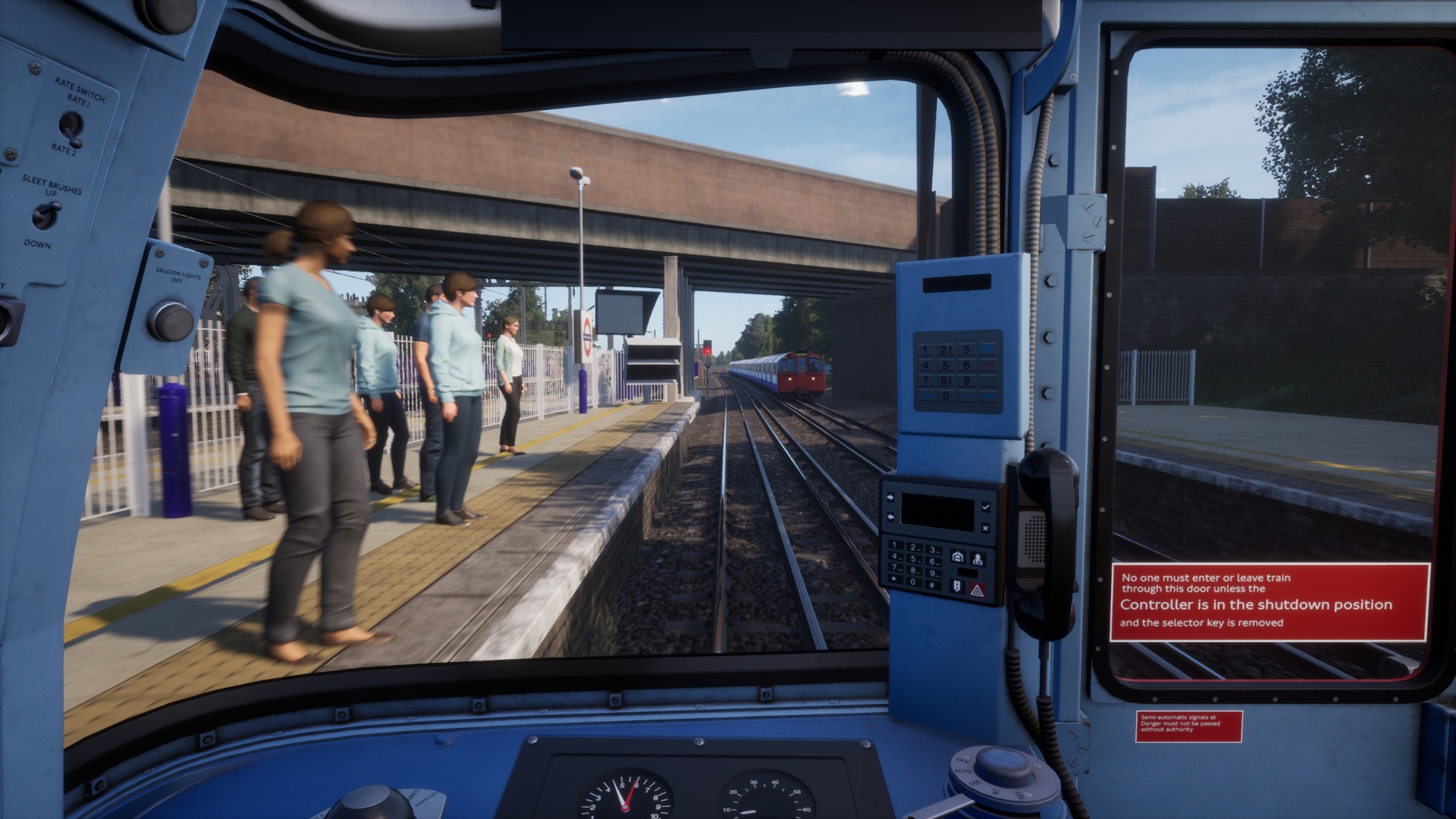 Harrow & Wealdstone, the northern extremity of the Bakerloo Line since LU services to Watford were discontinued in the 1960s, has an unenviable place in British railway history. It was here in October 1952 that the UK's worst ever peacetime rail accident occurred. Three trains were involved as this Pathé news report explains...

Quite why the overnight Perth to Euston express ignored the one colour light signal and the two semaphore signals that were protecting the crowded commuter train waiting at platform 4, will never be known; the footplate crew responsible for the dreadful mistake were among the 112 people killed in the collision. 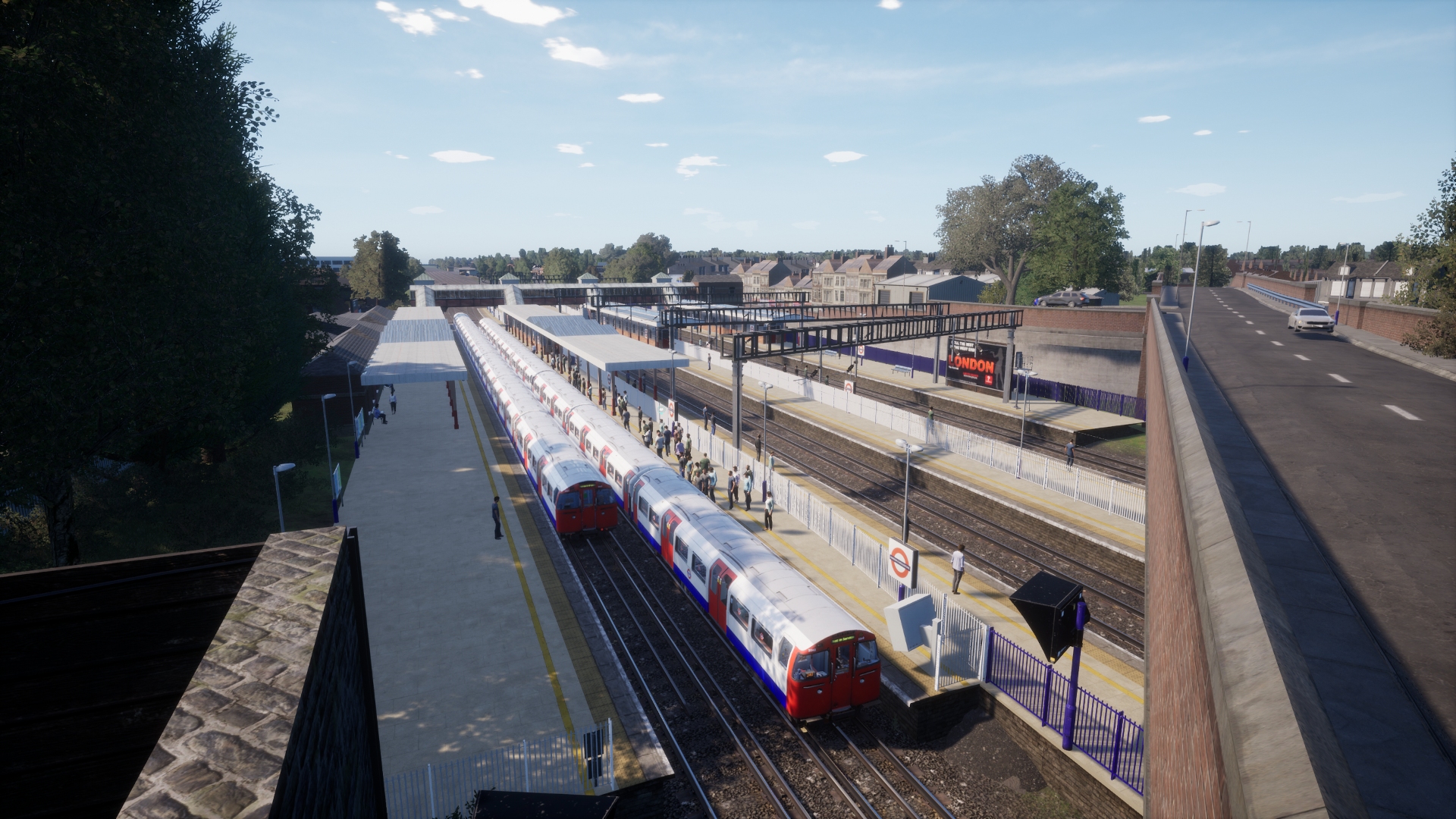 The footbridge dramatically severed by over-riding carriages makes it into TSW2 unlike the station's lofty timepiece, the hands of which were shocked into immotility by what occurred at 08.19 on that fateful autumn morning.

Because the Bakerloo Line runs parallel to the West Coast Main Line here and shares tracks with London Overground trains, real-life Harrow & Wealdstone is a great place for train watching. I'd suggest you keep your eyes peeled for passing Pendolinos, Aventras, Desiros and the like if Dovetail had taken the trouble to model non-LU services. Sadly, they haven't. Whoever's calling the shots down at Chatham doesn't seem to realise how much pleasure the average train simmer derives from ogling incidental traffic. 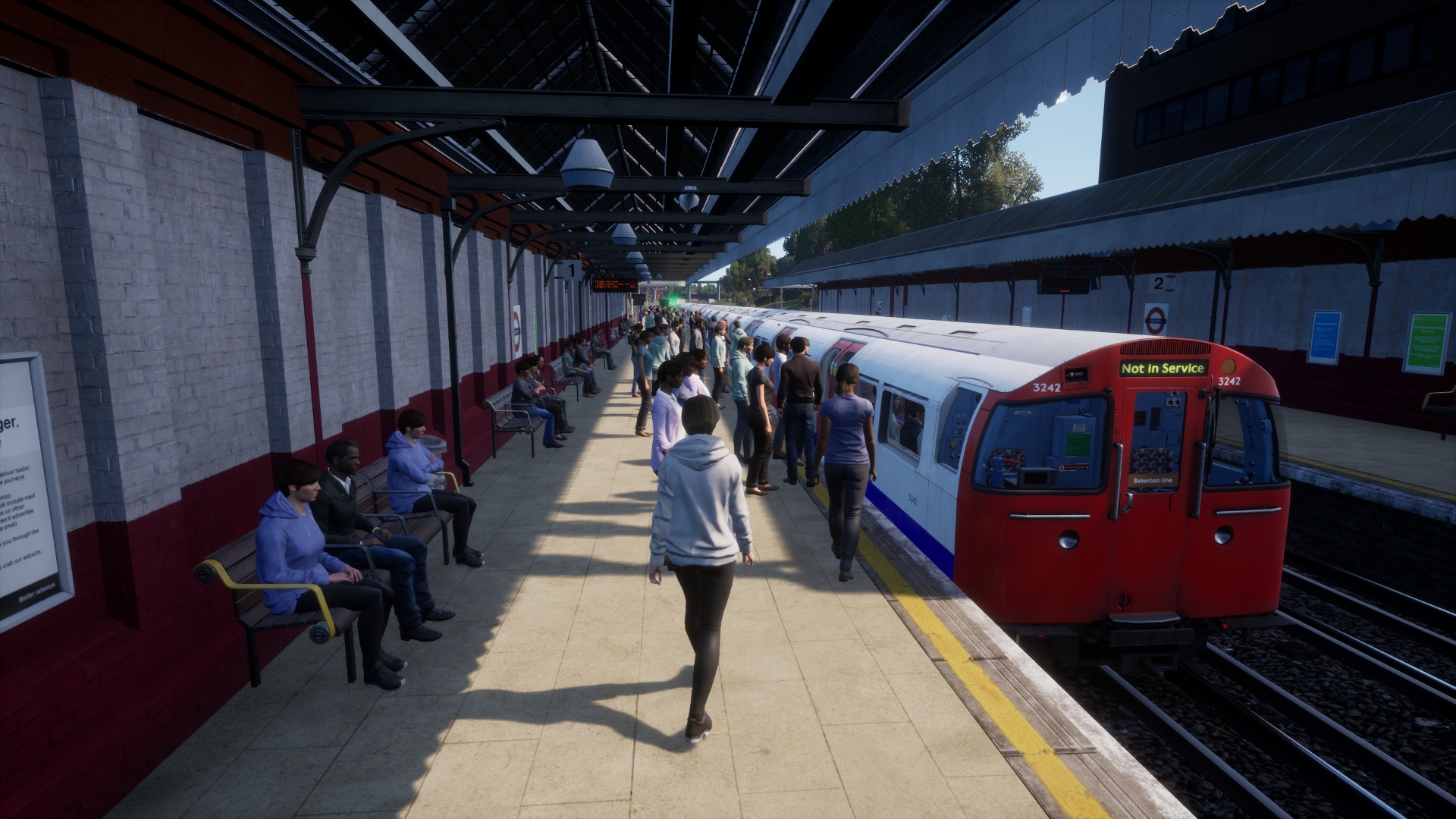 Kenton already? Alight here if you're a fan of classic British TV comedy. A five minute stroll from the station is the leafy suburban road junction where Basil Fawlty gave a recalcitrant Austin 1100 Countryman “a damn good thrashing”. 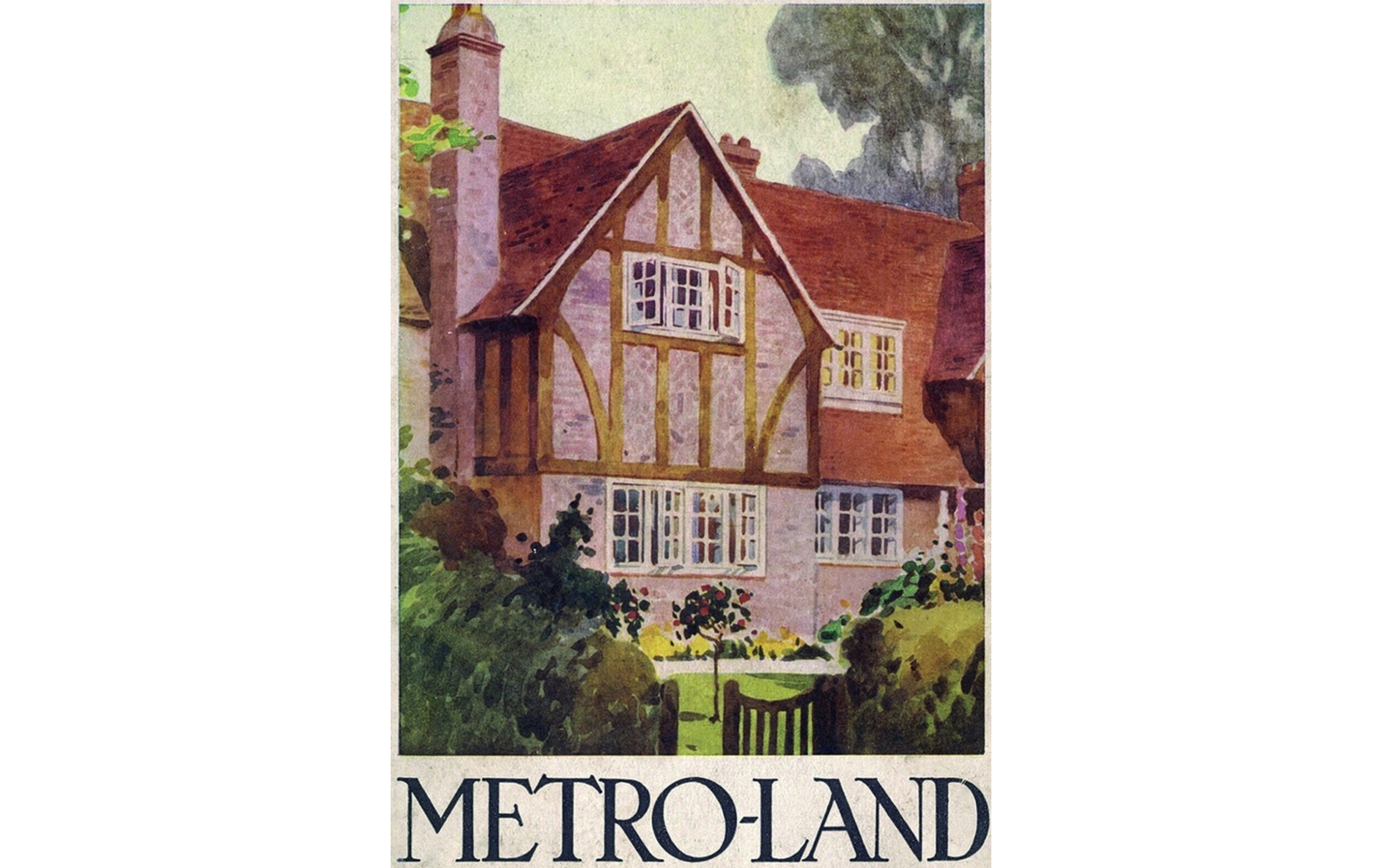 The mock-Tudor semis that line Lapstone Gardens and countless other streets in this neck-of-the-woods were built between the wars by canny railway tycoons and opportunistic property developers. Kenton is part of 'Metro-Land', an (initially) rural strip of Middlesex, Buckinghamshire and Hertfordshire speedily developed and cleverly marketed by the customer-hungry Metropolitan Railway (now the nearby Metropolitan Line). No-one wrote of life in this self-defeating suburbia more memorably than poet John Betjeman.

Gaily into Ruislip Gardens
Runs the red electric train,
With a thousand Ta’s and Pardon’s
Daintily alights Elaine;
Hurries down the concrete station
With a frown of concentration,
Out into the outskirt’s edges
Where a few surviving hedges
Keep alive our lost Elysium – rural Middlesex again.

Gentle Brent, I used to know you
Wandering Wembley-wards at will,
Now what change your waters show you
In the meadowlands you fill!
Recollect the elm-trees misty
And the footpaths climbing twisty
Under cedar-shaded palings,
Low laburnum-leaned-on railings
Out of Northolt on and upward to the heights of Harrow hill.

Parish of enormous hayfields
Perivale stood all alone,
And from Greenford scent of mayfields
Most enticingly was blown
Over market gardens tidy,
Taverns for the bona fide,
Cockney singers, cockney shooters,
Murray Poshes, Lupin Pooters,
Long in Kensal Green and Highgate silent under soot and stone. 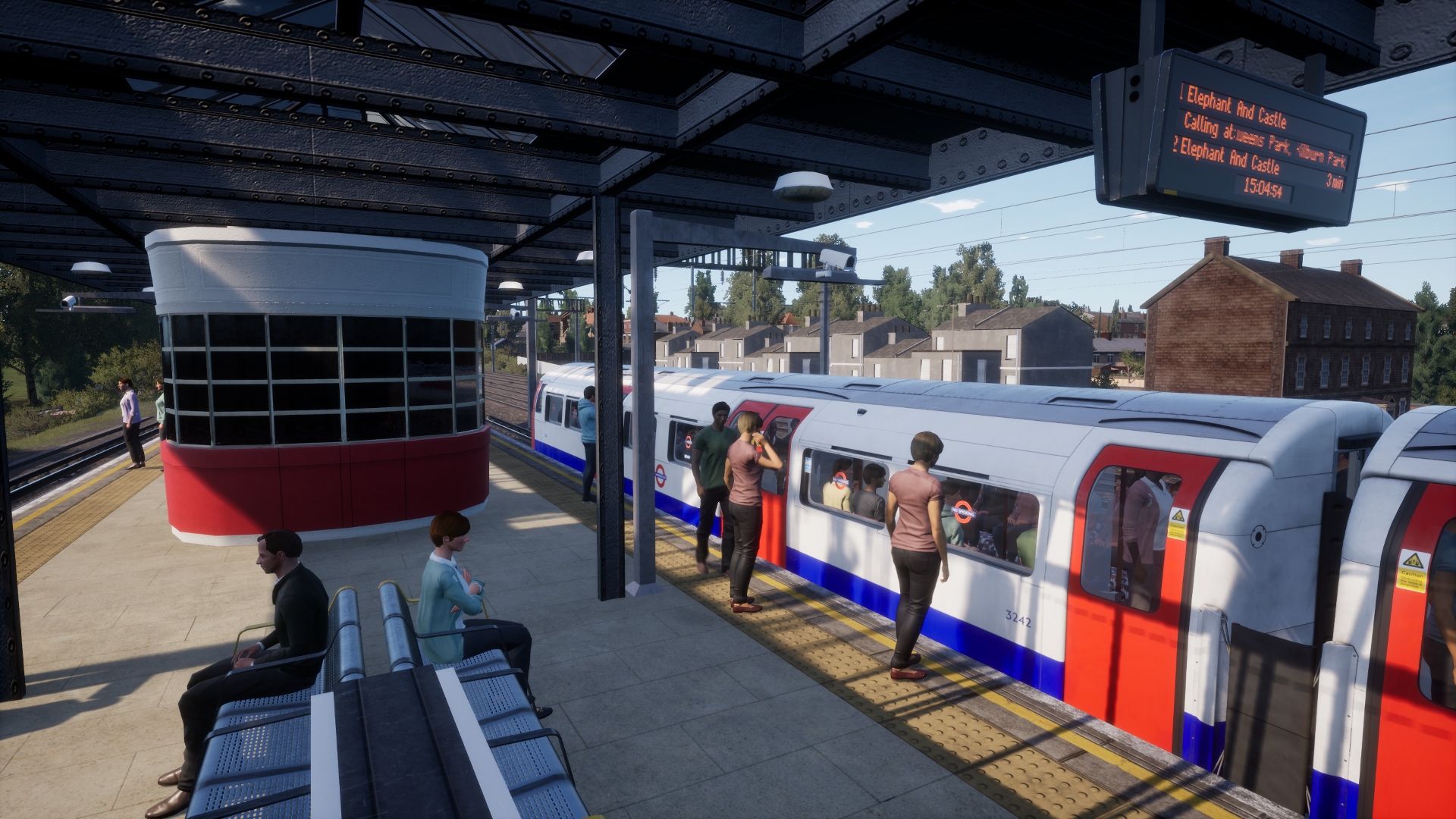 Talking of “taverns for the bona fide” South Kenton, the next station on our route, boasts – in reality at least – a splendid platform-adjacent public house. The Dutch-style Grade III listed Windermere has been urging Bakerloovians to “TAKE COURAGE” since 1938 and really deserved a bespoke structure in TSW2 instead of the generic brick one it's ended up with. 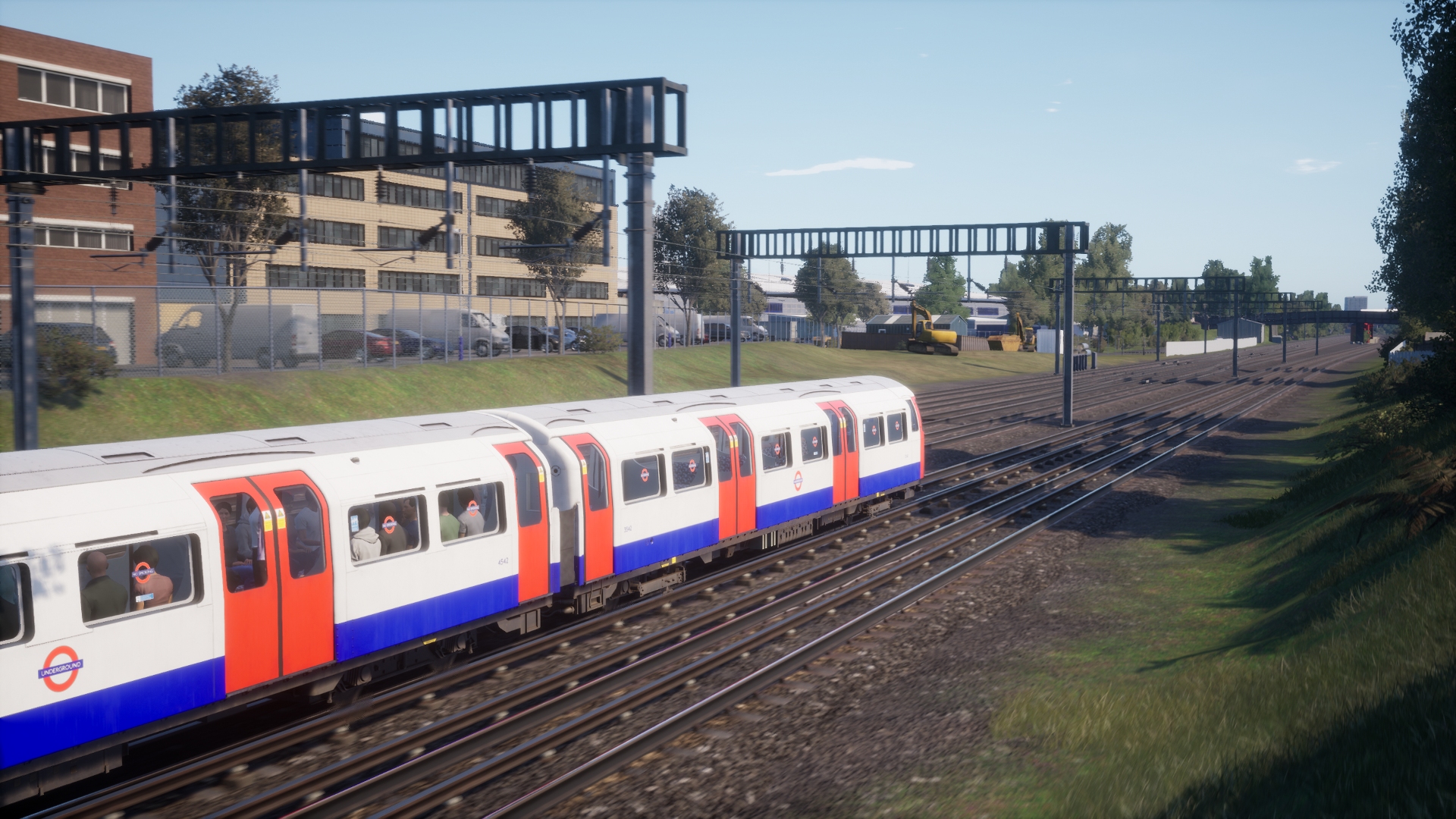 Next stop, North Wembley. I believe that honey-coloured office block on the left is Dovetail's nod to the stylish Art Deco factory that kept Britain masticating between 1927 and 1970. Almost all of the fields visible in this photo of the then newly built Wrigley chewing gum works would be colonised by Metrolanders in the decade that followed. By 1945 the area NE of the factory looked like this... 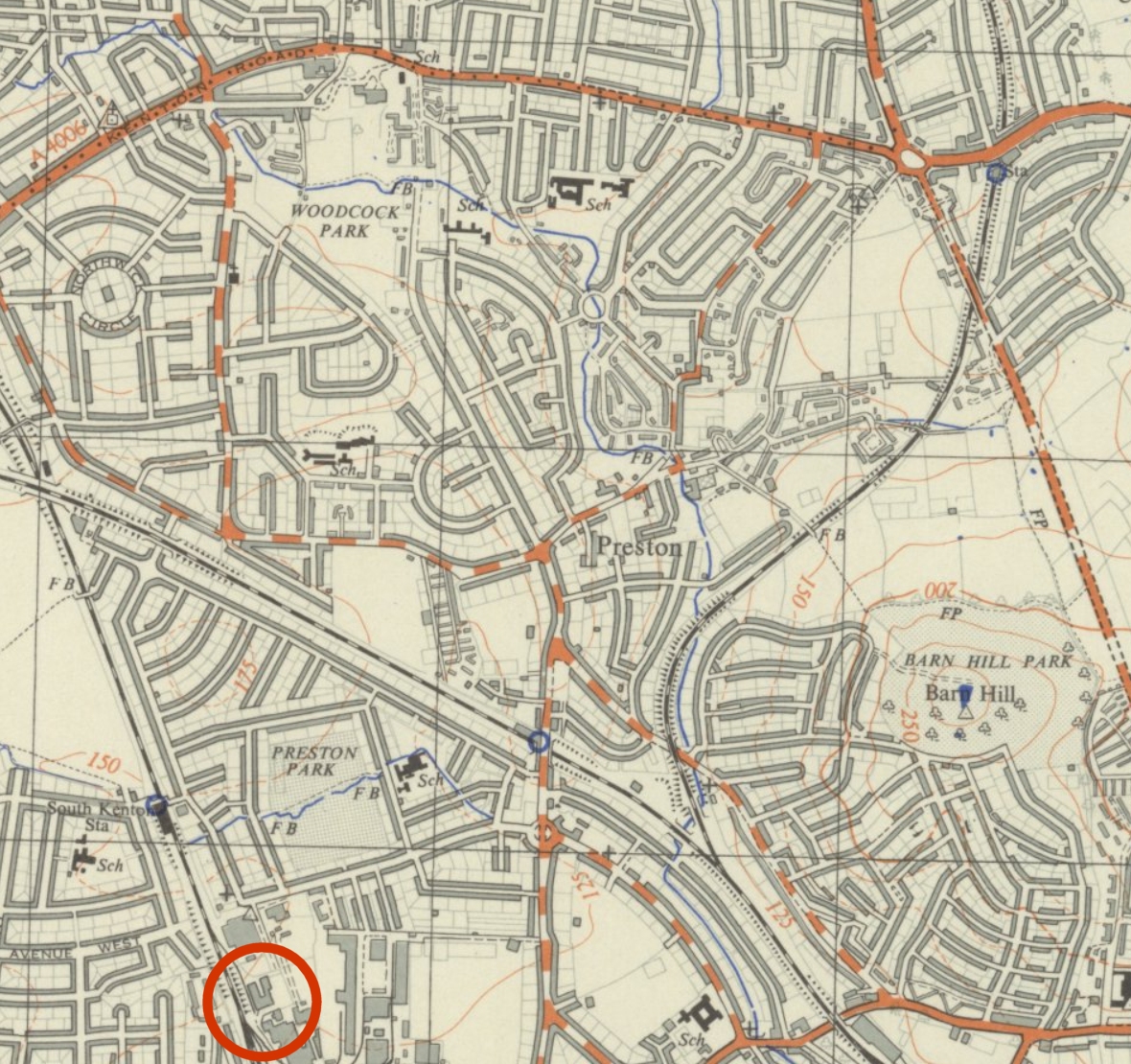 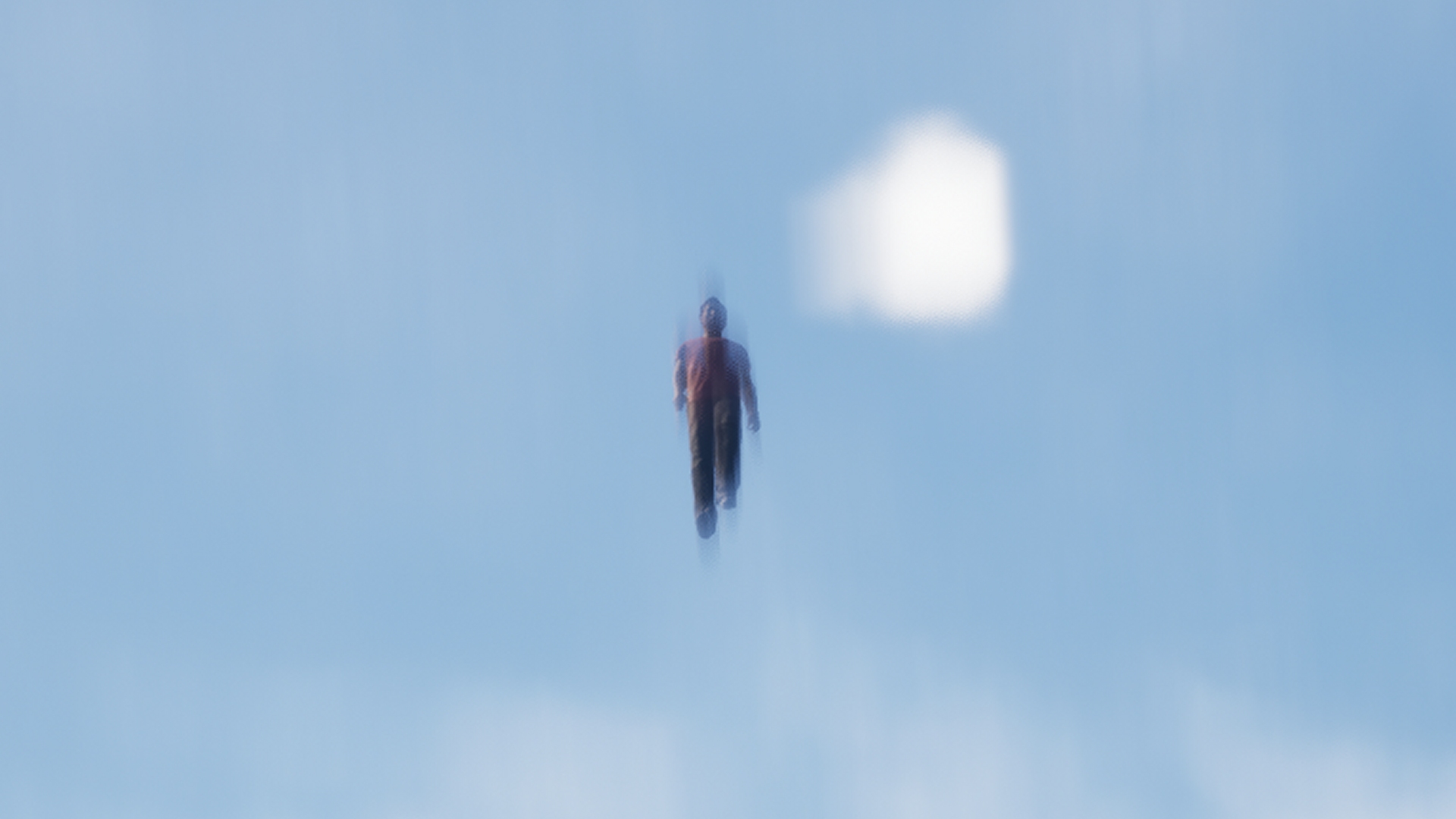 During our brief stop at North Wembley, why not enjoy one of the review code's most entertaining bugs. If you're lucky you may see a few passengers launched into the sky like bottle rockets on crossing the threshold between train and platform. I'm all for Minding the Gap but feel this degree of caution may actually be counterproductive. 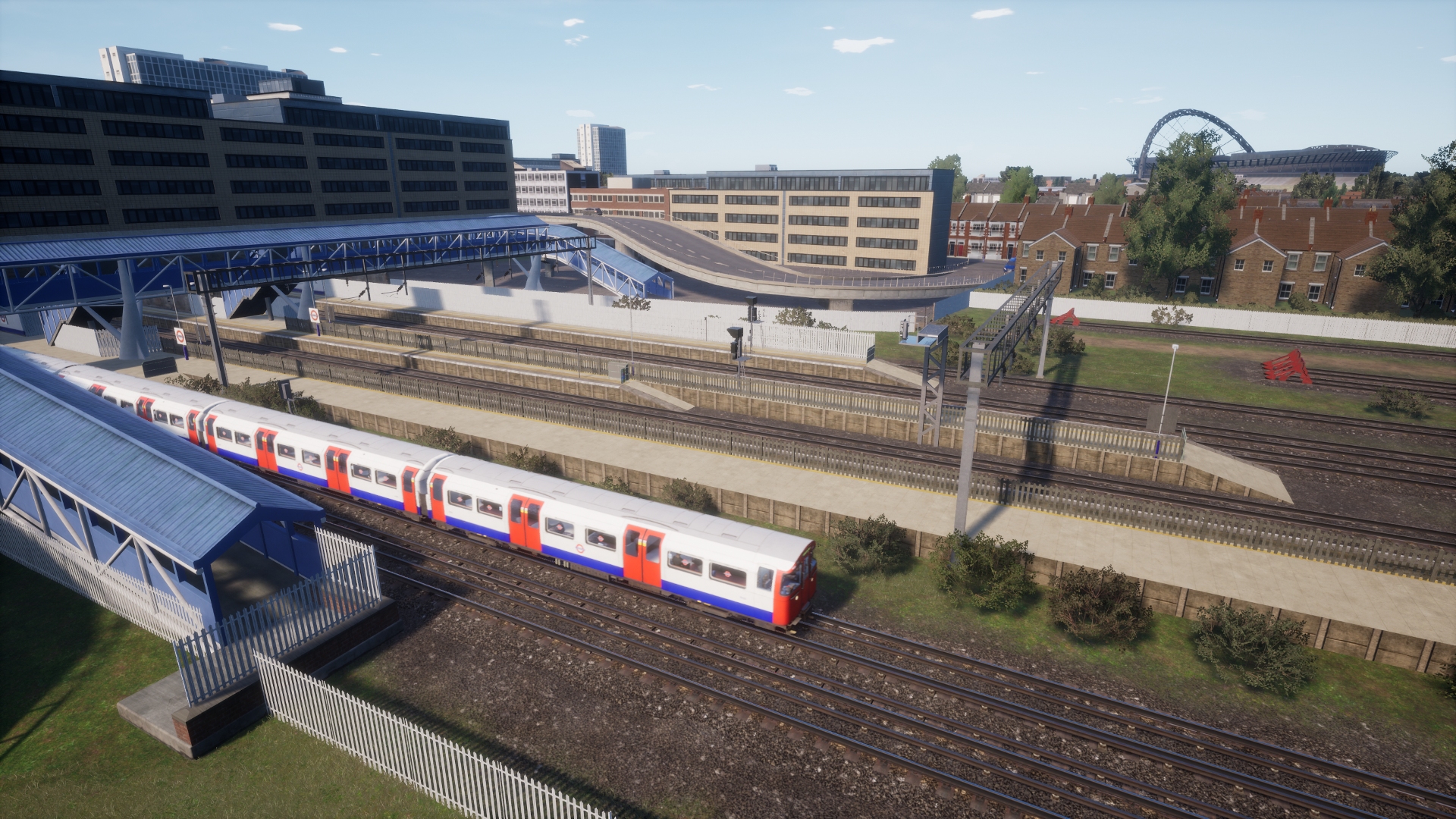 If Sir Edward Watkin had had his way the most famous landmark visible from Wembley Central, stop number five, would have been a tower not a sports stadium. A serial railway entrepreneur, Watkin believed that Londoners would flock to use the Metropolitan Railway (of which he was chairman) if there was something stupendous waiting for them in bucolic Wembley. A vast pleasure garden dotted with bandstands, boating lakes, and sports facilities was deemed insufficiently stupendous on its own. What was needed was something similar to, but taller than (natch), the recently completed Eiffel Tower. 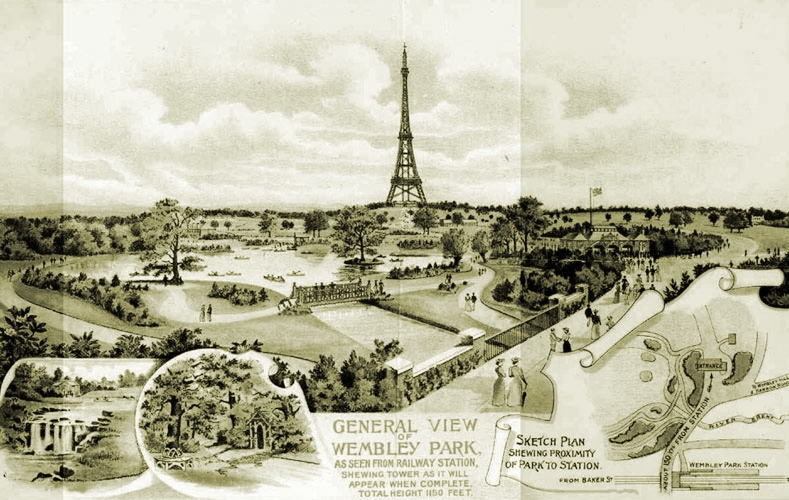 When Monsieur Eiffel refused the commission on patriotism grounds (“people would not think me so good a Frenchman as I hope I am.”) Watkin organised a design competition with a 500 guineas prize. There were 68 submissions in all.

Sadly, designs such as S. Fisher's... 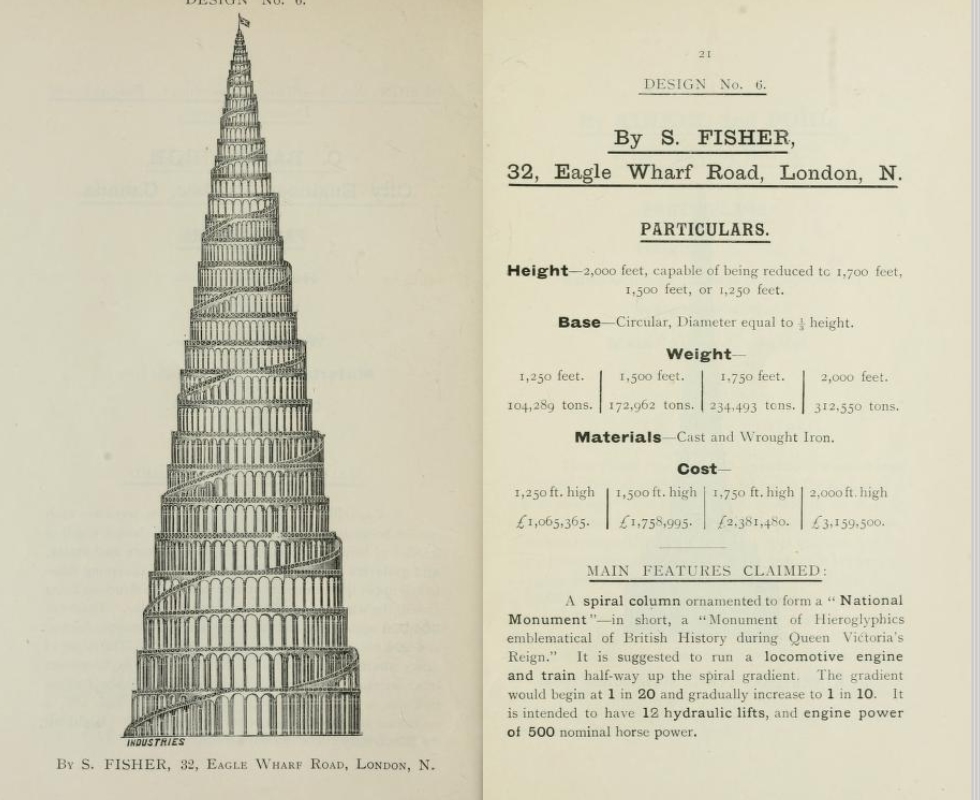 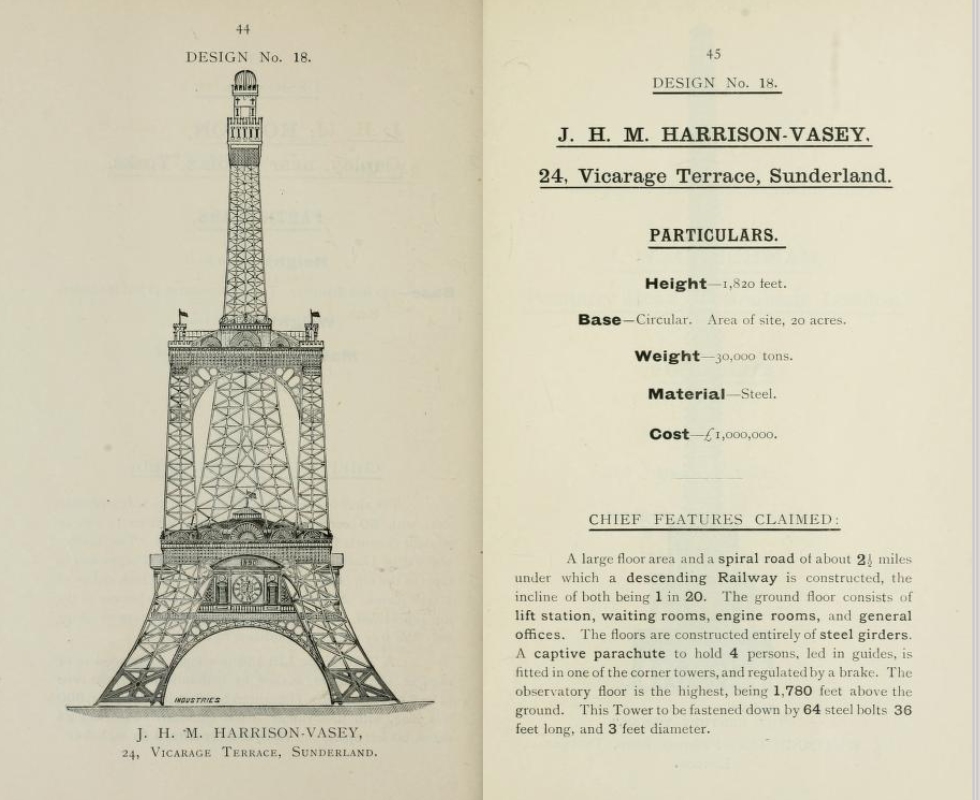 “A captive parachute to hold 4 persons, led in guides, is fitted in one of the corner towers, and regulated by a brake” 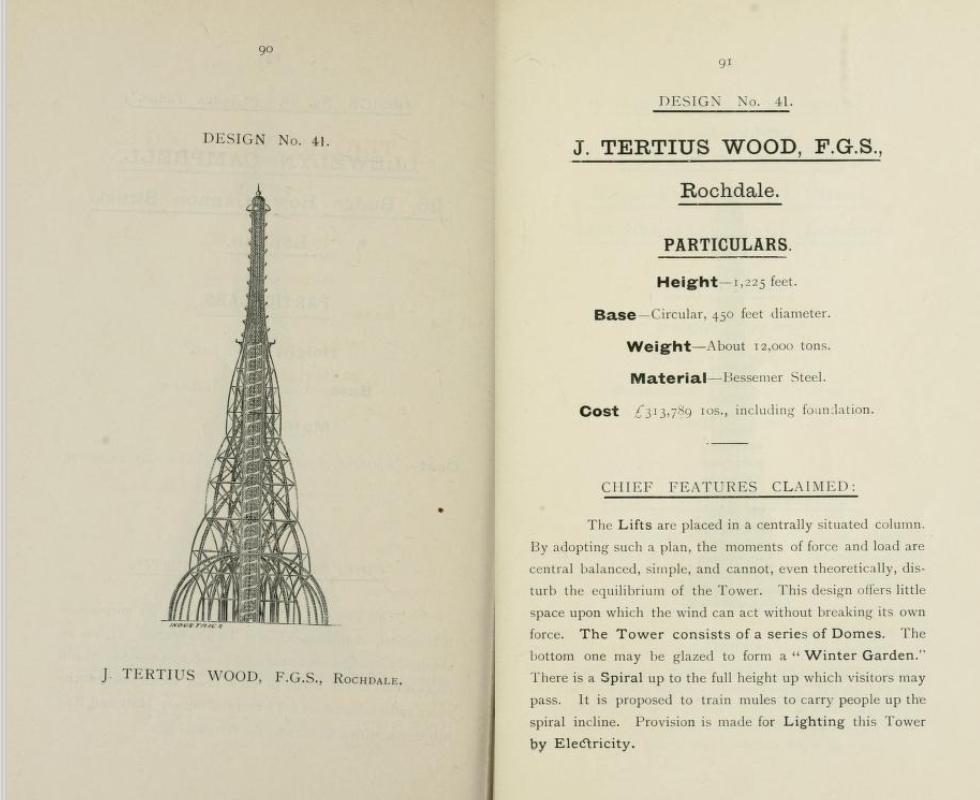 “There is a Spiral up to the full height up which visitors may pass. It is proposed to train mules to carry people up the spiral incline.”

...were rejected in favour of a relatively conservative 1200-foot octagonal pagoda by a London firm. 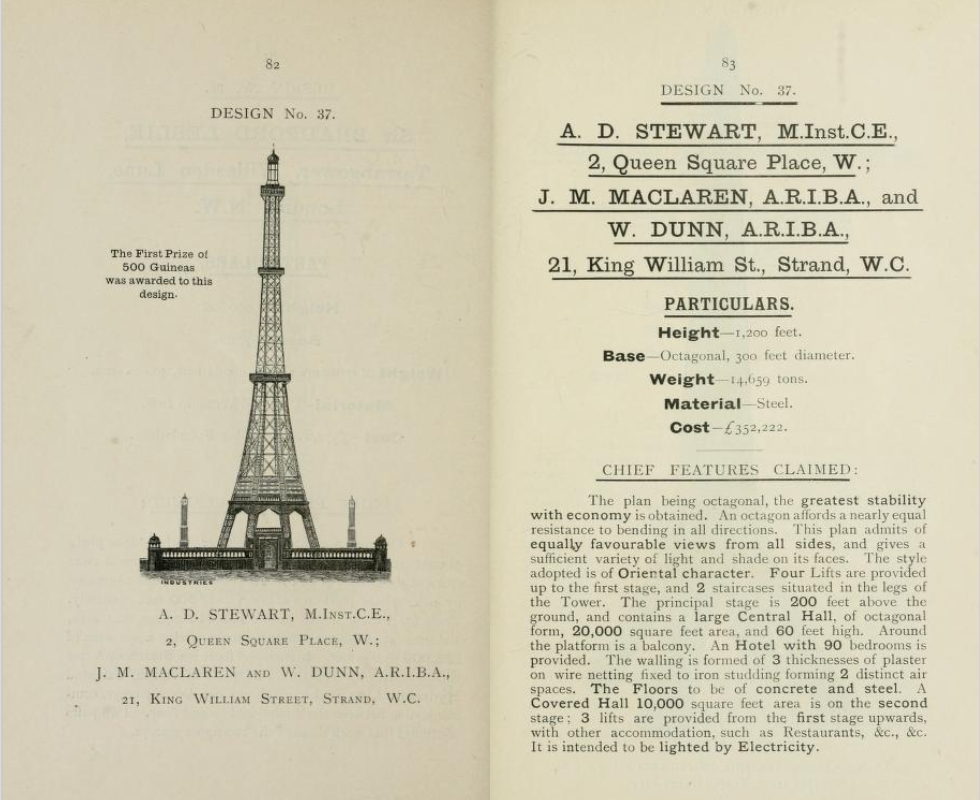 Design #37 might have wowed the judges but investors weren't overly enthusiastic. Funding difficulties led to the tower losing four of its eight legs before construction work began, and later subsidence issues combined with Watkin's failing health meant that the unfinished structure was shorter than Nelson's Column when finally abandoned in 1899. Dynamite removed the last vestiges of the pale pachyderm in 1907 and today the site is occupied by the home of English association foot-to-ball, Wembley Stadium. 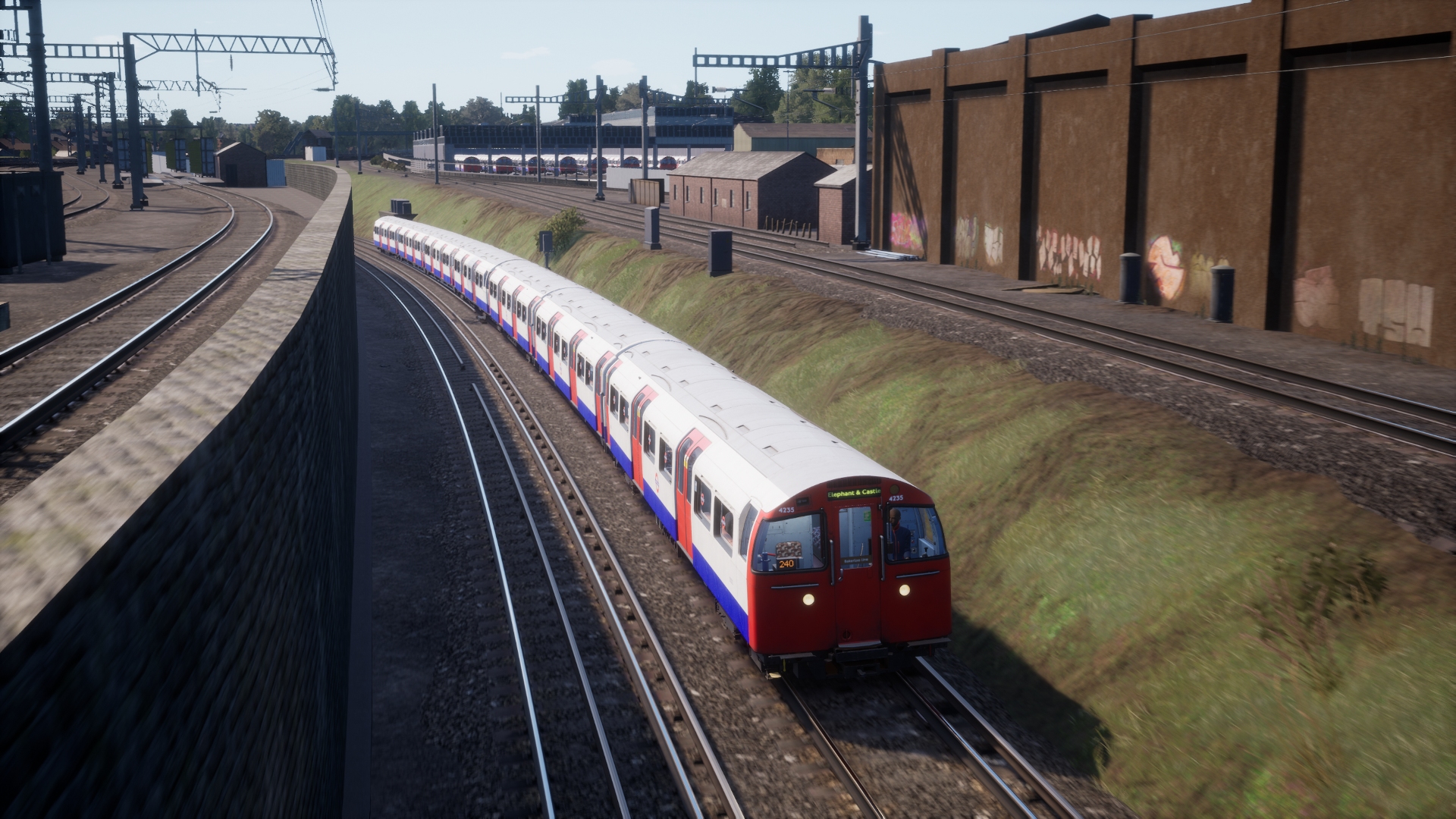 Leaving Wembley Central we dart under the WCML emerging close to the Bakerloo's main depot. In a minute or so we'll be pulling into Stonebridge Park, the LU station you trudge to after some swine swipes your beloved Triton while you're in the Ace Cafe demolishing a full English. 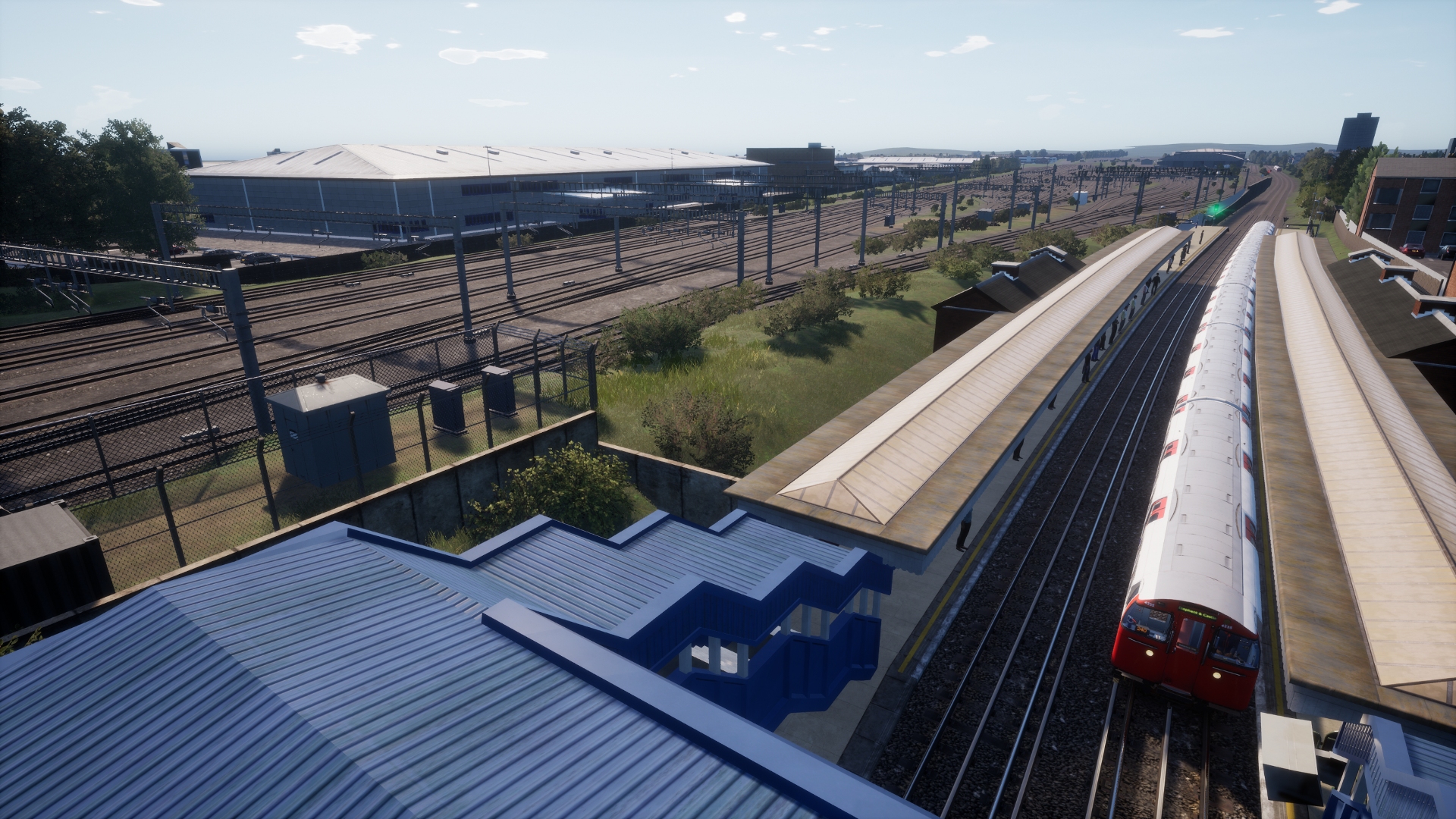 After Stonebridge Park comes Harlesden, when the wind is blowing from the SW, probably the capital's most aromatic Tube station. The appetising smell comes from that big grey building over yonder. If you're British and wheat tolerant you will definitely have eaten something baked in Europe's biggest biscuit factory. McVitie's Rich Tea, Chocolate Hobnobs, Digestives, and chocolate digestives... they all hail from Harlesden. Britons consume over 71 million packets of the latter every year (roughly 52 biscuits per second). While my contribution to this sterling effort has dwindled of late, I try to help out whenever I can.

Not all of the bombs that ravaged this part of Greater London during the last war were made in Germany. A few had local origins. Between January 1939 and March 1940 the IRA planted 300 infernal machines on the British mainland. The targets of the 'S-Plan' (S = sabotage) were largely infrastructural but ten people died and around a hundred were injured as a result of the campaign. In Harlesden a bridge carrying electricity cables across the Paddington Arm of the Grand Union Canal was hit. In Stonebridge Park an aqueduct was molested. In Willesden (our next port of call) the bombers had a go at a railway line. 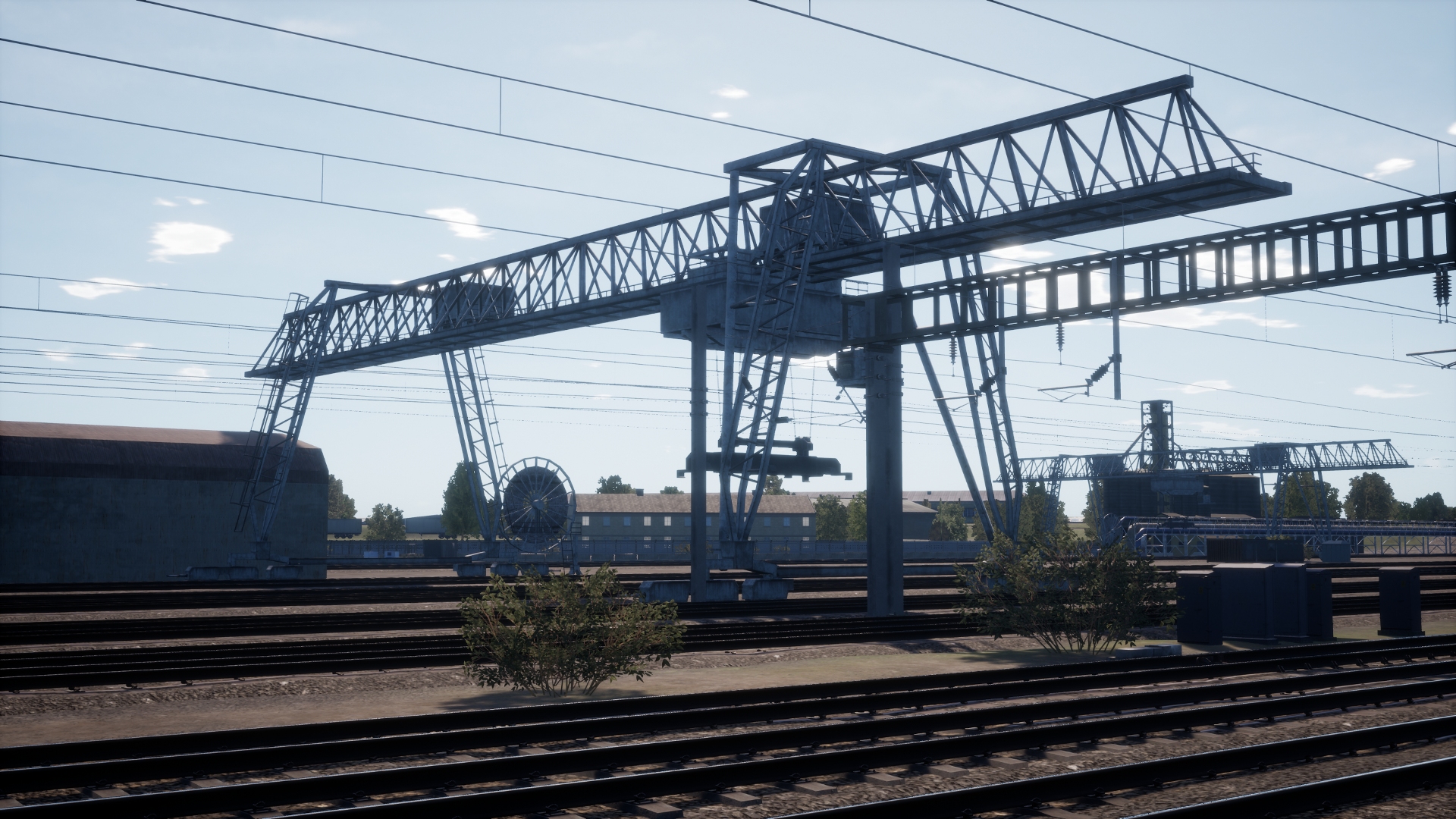 The towering container cranes dashing past on our right at present have more than substantial steelwork and quadrupedalism in common with Watkin's Folly. The massive freight yard they loom over was built to handle a stream of Eurotunnel freight trains that unfortunately never materialised. Dovetail fail to acknowledge that three of the four track-straddlers were demolished early last year in preparation for the yard's new role as an HS2 construction hub and that all wore striking yellow paintjobs. 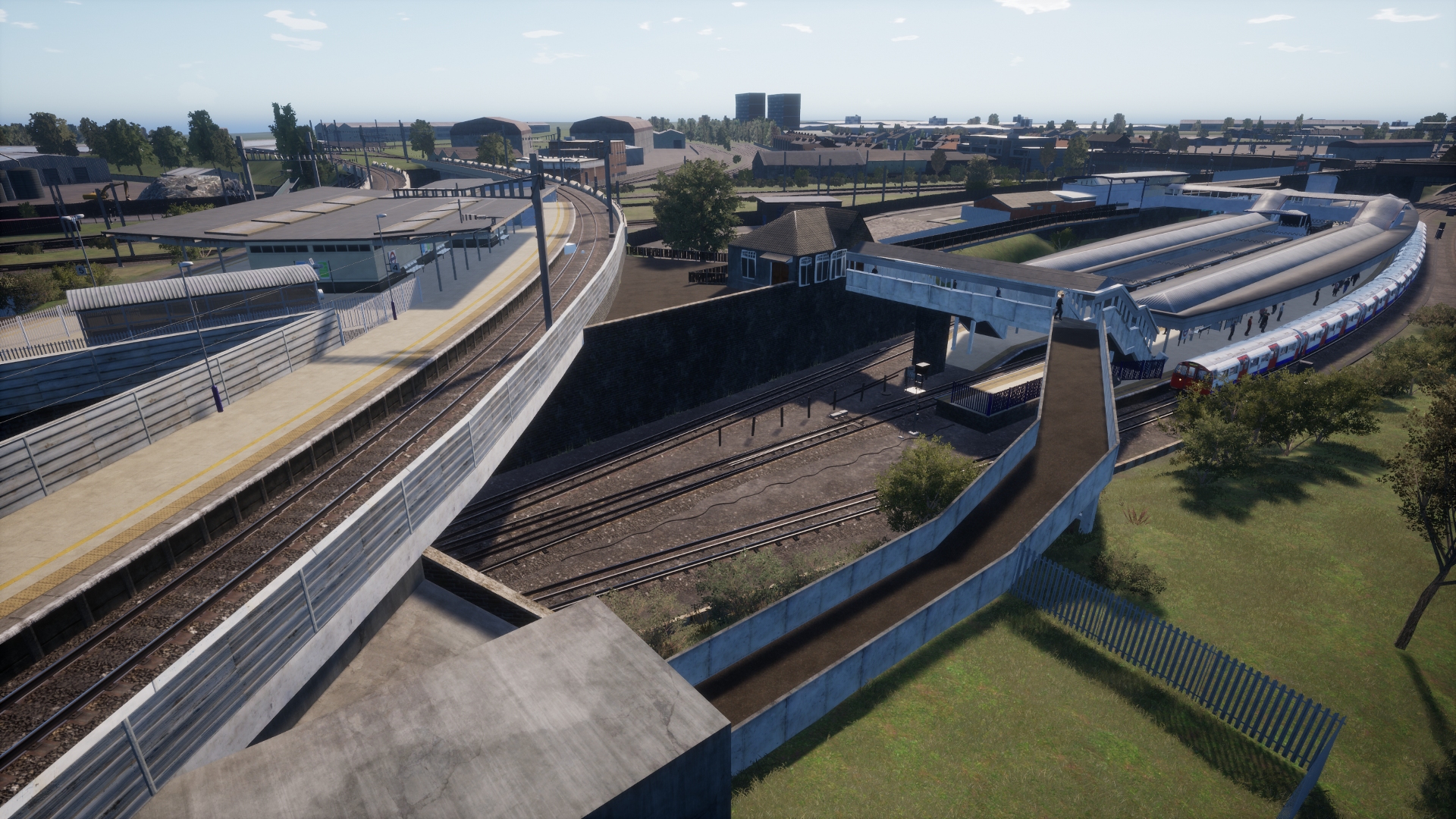 Willesden Junction station is a complicated affair. We're using the lower portion. A couple of minutes after departing the high-level part, southbound trains cross the line featured in the first Flare Path rail tour on their way to either Acton Central or Shepherds Bush. 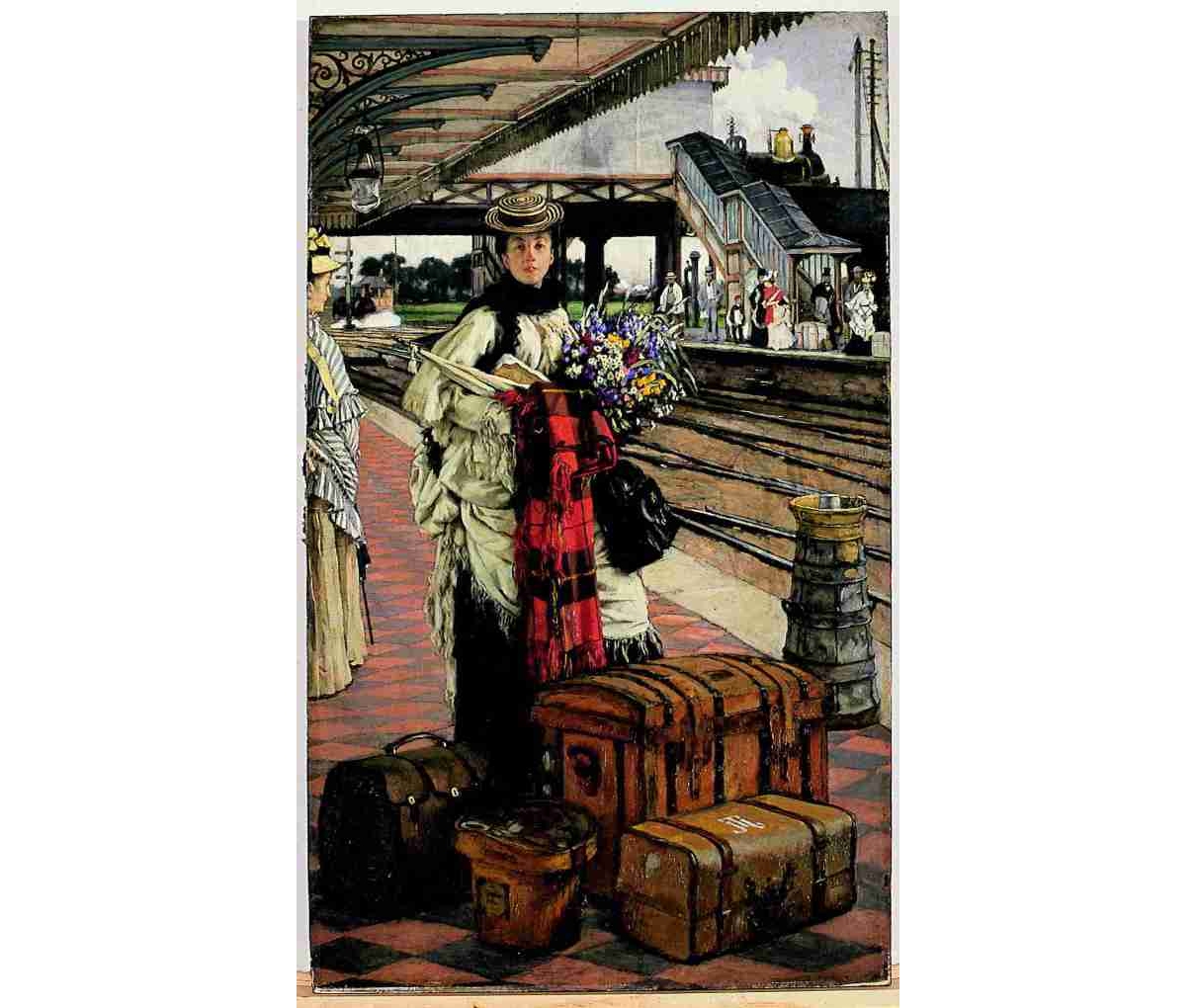 When James Tissot painted a prodigiously luggaged traveller waiting for a connection at Willesden Junction in the early 1870s, although the site's tangle of lines was already well established, the station was still surrounded by hedge-hemmed fields... 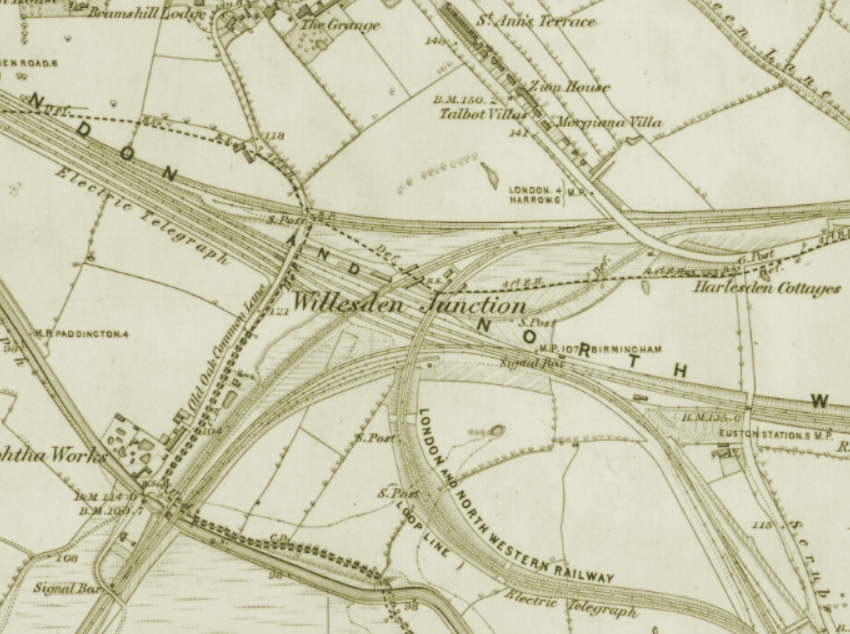 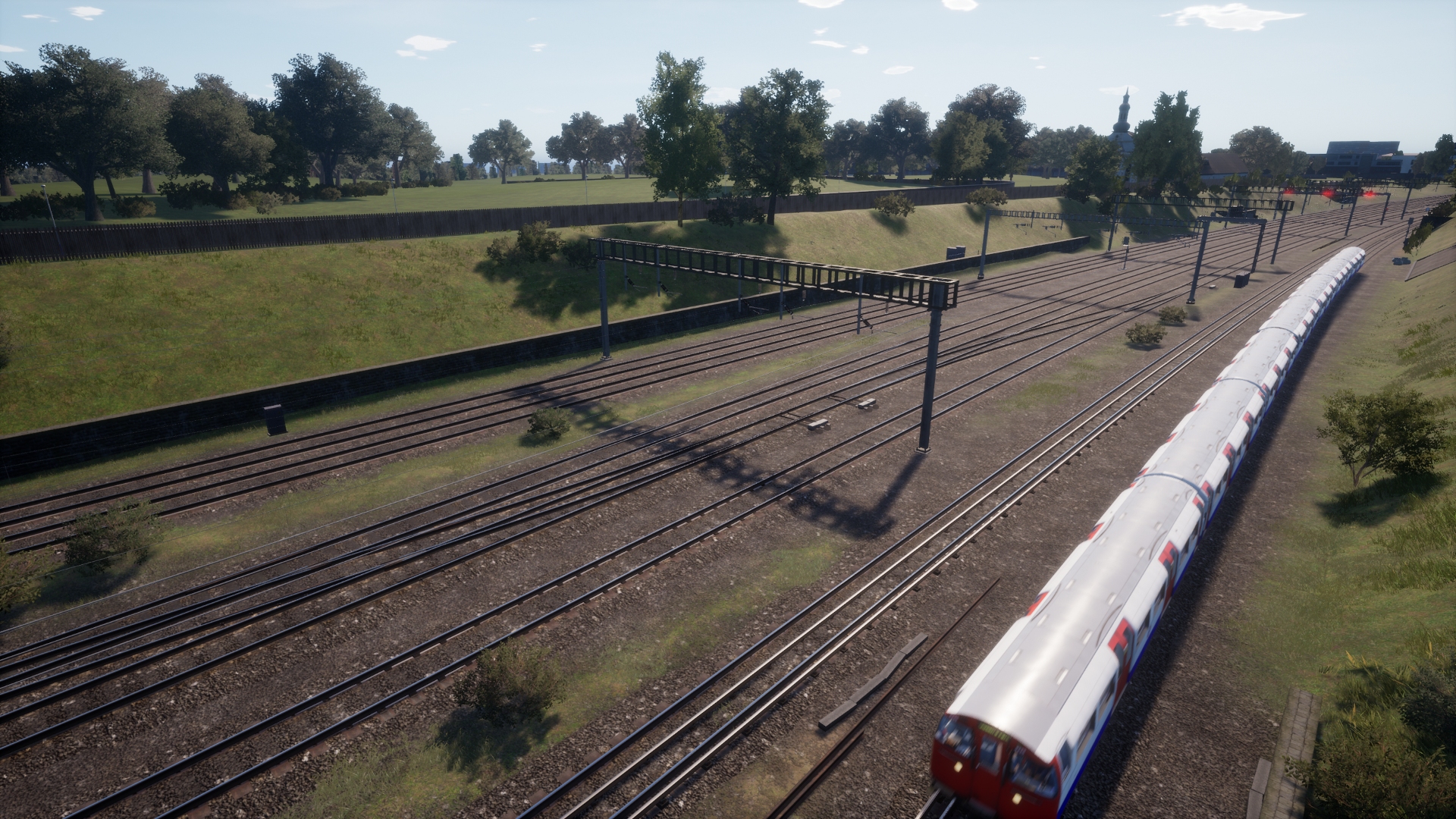 TSW2 implies that a tract of this farmland just to the east of the junction survives to this day. Actually the green space unfurling on our starboard beam is Kensal Green Cemetery, one of the capital's 'Magnificent Seven' boneyards. Among the luminaries dirtnapping there are Victorian storytellers Anthony Trollope and Wilkie Collins, engineer par excellence Isambard Kingdom Brunel, Niagara daredevil Charles Blondin, and Overclockers' first customer Charles Babbage. 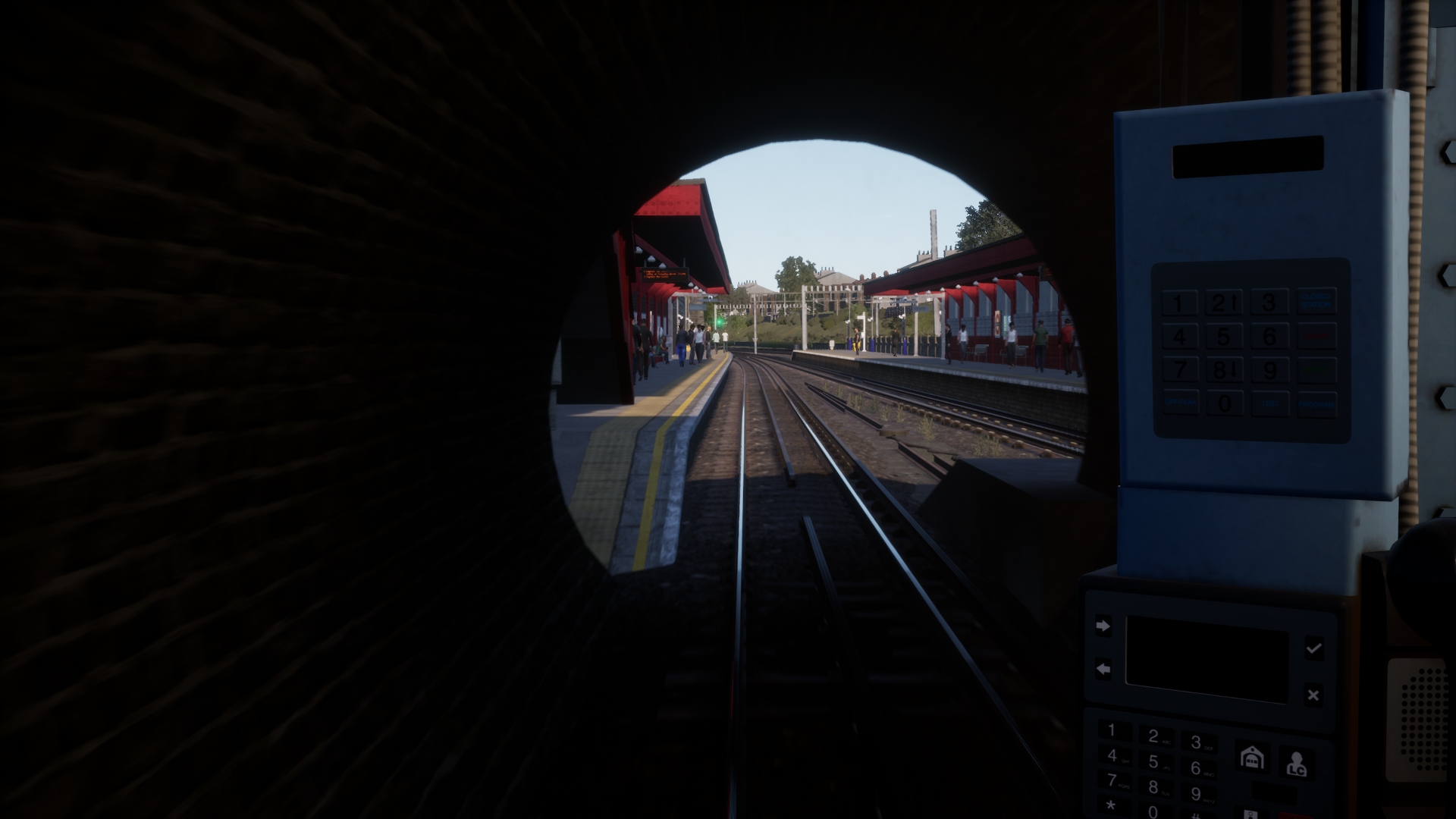 This 320-yard tunnel leading to Kensal Green station gives a taste of what's to come beyond Queen's Park, the last surface stop on the southbound Bakerloo. Subterranean lighting isn't one of the sim's strong points, regretably. Want shiny rails and sooty brickwork plausibly illumined by jiggling headlights and sudden arc flashes? With luck they'll make it into TSW3 or 4.

My favourite bit of the entire route is imminent. Approaching Queen's Park, true to prototype, we beetle through a train shed... 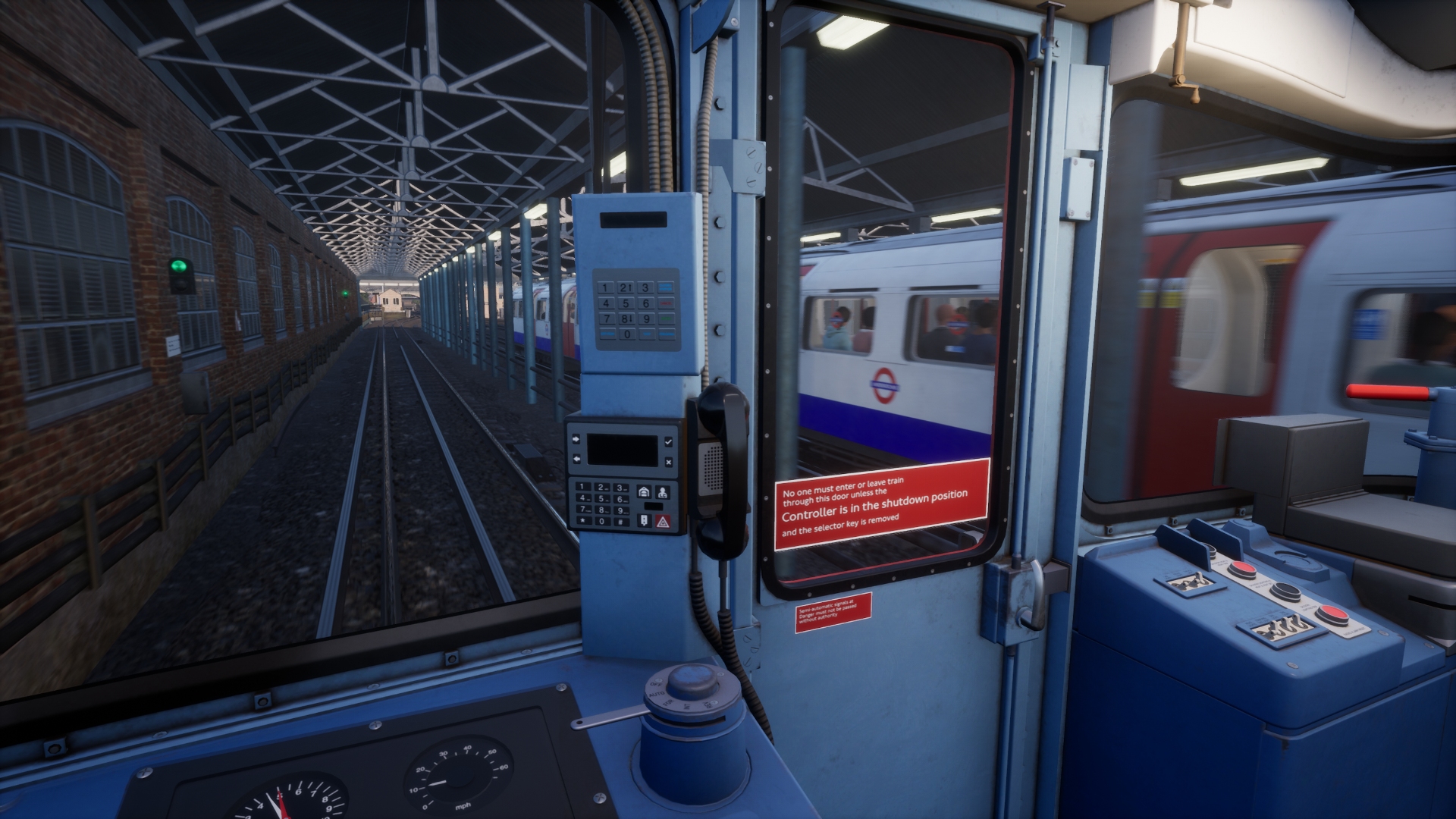 And beyond the station, pass a fetching facade before descending a surprisingly steep bank into the bowels of West London. 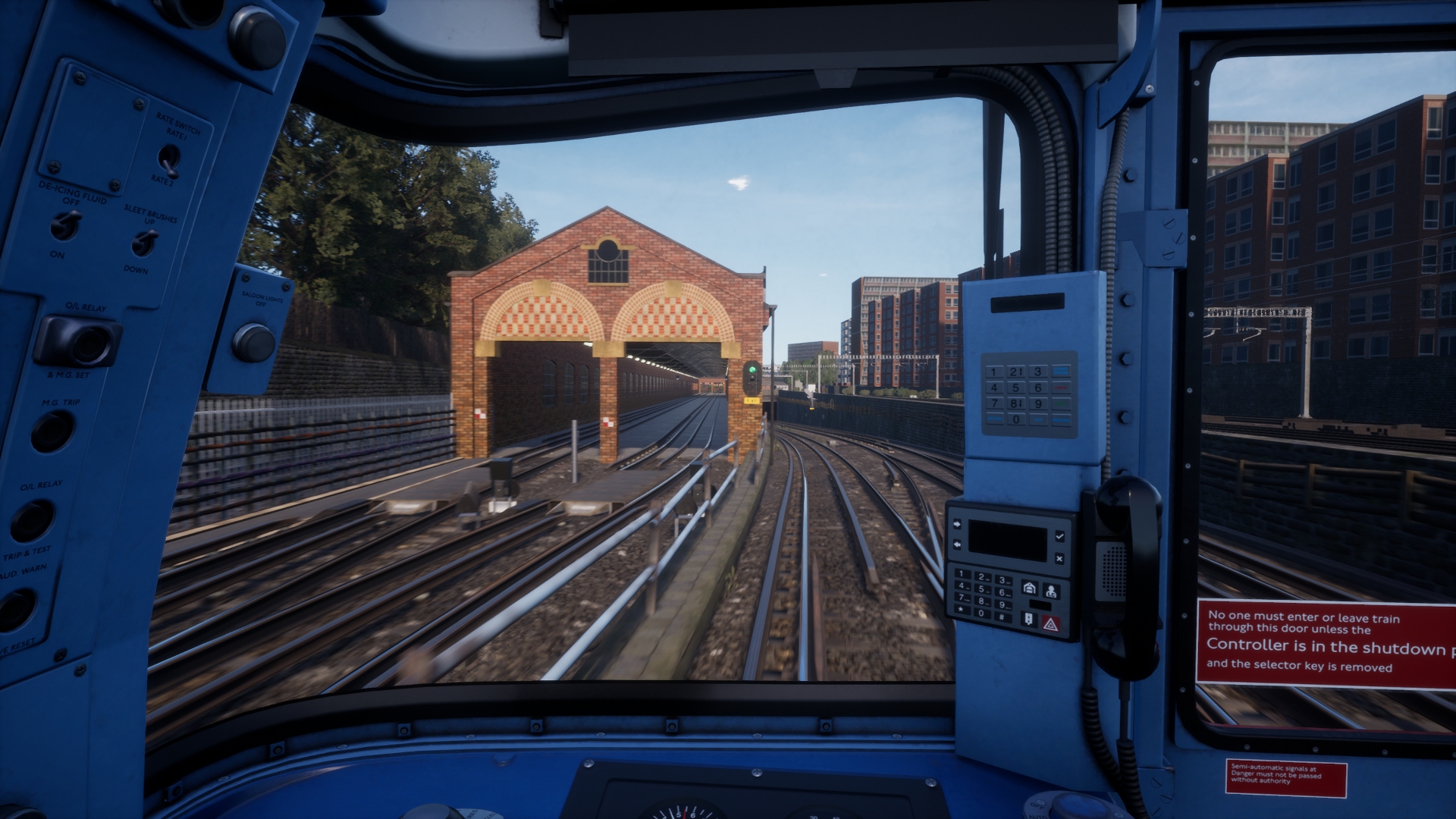 In the early hours of 19 February 1984 a train sped down this slope with no-one at the controls. The runaway, which had somehow managed to slip its overnight moorings at platform 2, narrowly missed four track workers before scuttling underground like a spooked centipede. Gathering speed as it clattered through Kilburn Park, Maida Vale, Warwick Avenue, Paddington, Edgware Road, and Marylebone, it was eventually brought to a halt 5.7 kilometres from its starting point by a combination of the incline between Marylebone and Baker Street and the sharp bend at Regent's Park. 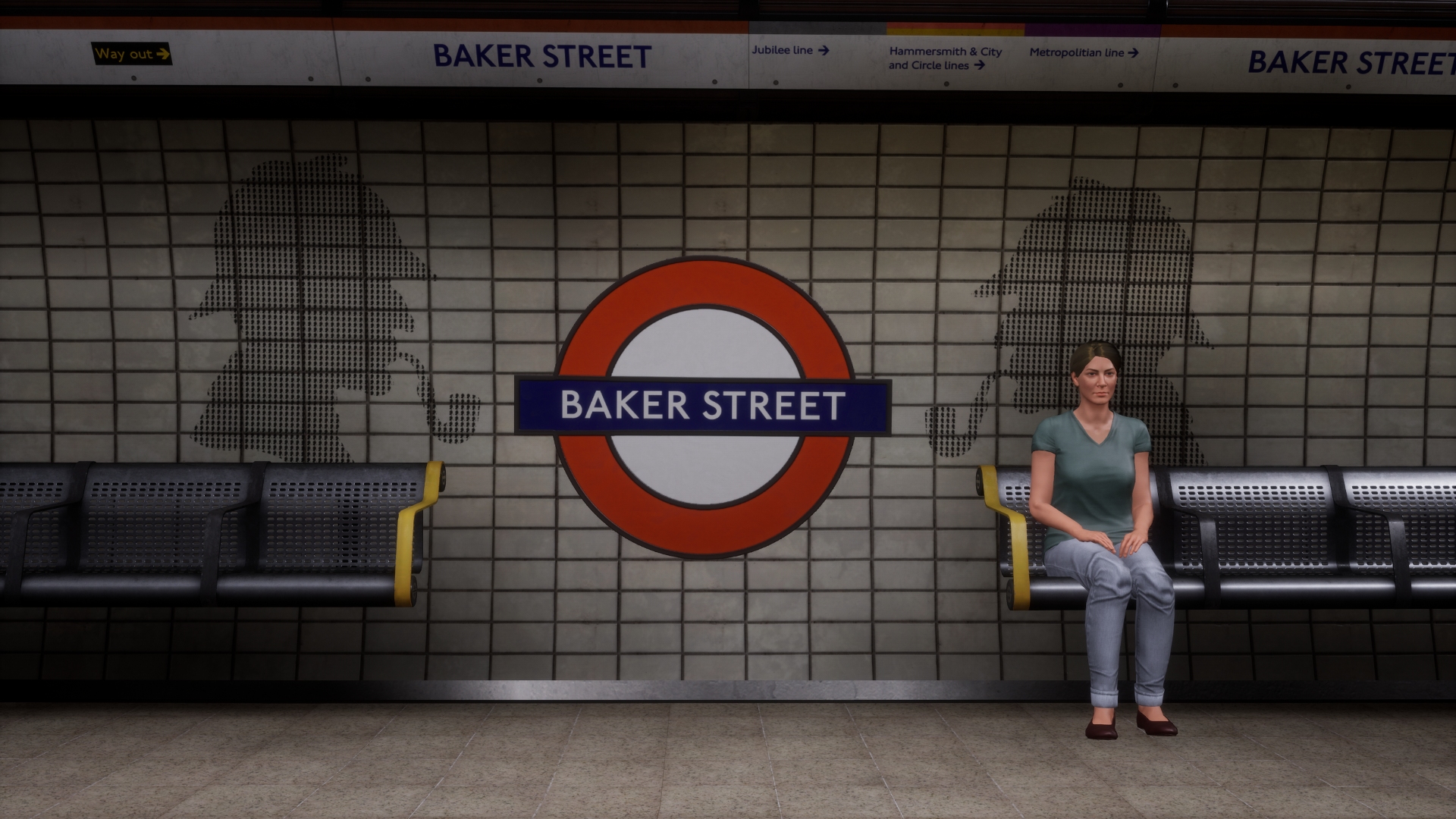 I hope to get a little further than that restless rambler when I start exploring Bakerloo's darker reaches next week. Join me next Friday for more TSW2 observations, Tube trivia, and extracurricular history.