I'm looking at an extremely handsome Swedish-made diesel locomotive. I'm in a landlocked country that has a horizontal tricolour for a flag. If I flew around the globe at this latitude I'd pass over one European capital. I'm half a mile from the shore of a lake and roughly the same distance from the bust of a Nobel Prize winner. In the spring of 1945 there was fierce fighting in this area. The post boxes in this part of the world are red. About three miles south of here is a medieval abbey.

The 127-cell honeycomb below is a fancy form of wordsearch in which every cell is used, and words can curl and zigzag but never overlap. Each hive foxer has a unique theme (some past themes: roses, Harry Potter, gold, postage stamps, and The 39 Steps) Identifying this theme is a vital part of the defoxing process. Today’s puzzle contains twenty-two words. 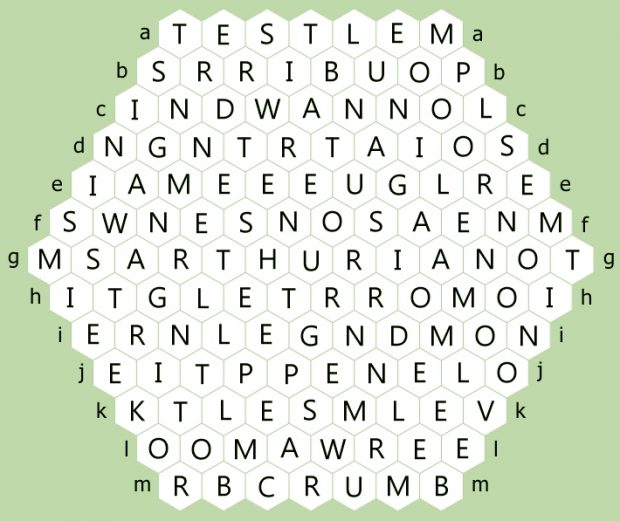 Last week's warm-up foxer: I was Verity (defoxed by phlebas)

1. MASI - The military truck in this pic (phlebas)
2. SIRWAL - A garment worn by some Battle of Mentana participants (AFKAMC)
3. WAL - This museum has one in its collection (Rorschach617)
4. WALKER - A postwar AFV bore his name (Gothnak)
5. ERASMUS - A Brussels Metro terminus (Joriath)
6. MUSASHI - Her remains rest here (Joriath)
7. SHILLELAGH - A missile and melee weapon (AFKAMC)
8. GHANA - One of the world’s largest cocoa producers (Gothnak)
9. ANAKONDA - This aircraft (Gothnak, Rorschach617)
10. DAYTONA - Dodge, Ferrari and Alfa Romeo all produced one (Gothnak)
11. NAVAJO - Spoken by a few specialised Allied soldiers during WW2 (Stugle)
12. JOYCE - There’s a statue of him close to this spot (Joriath)
13. CENTRIFUGE - A piece of lab equipment (phlebas)
14. GELA - Close Combat: The Bloody First will feature this battle (phlebas, Gothnak)
15. LAVROV - This man (Stugle)
16. OVERWATCH - A game mentioned in over 200 RPS articles (Gothnak)
17. TCHAIKOVSKY - Performances of one of his most famous tunes often involve weaponry (Stugle, Gothnak)
18. SKYLON - It once stood just about here (Gothnak, AbyssUK)
19. LONDON - He appeared on a US postage stamp in the mid-Eighties (Gothnak)
20. DONETSK - The capital of a dubious 21st Century proto-state (phlebas)
21. SKELETON - A word that can go before suit, watch, or key (phlebas)
22. TONKIN - An Oriental gulf that made the news in the mid Sixties (Stugle)
23. INPUT - A ZX Spectrum keyword (phlebas, Gothnak)
24. UTAH - The US state where this picture was taken (Stugle)