I am a lowly aspirant with nothing but my name and my failing body. I am uninitiated. I am a worm in the dark, crawling through the pages of the secret histories of the world.

This is “a game of apocalypse and yearning”, in which players attempt to direct eldritch forces and hidden gods without the faintest idea of what they're doing. Yearning and apocalypse, certainly, but it is also a game of ignorance. This is the essential magic of the game.

Elsewhere on RPS, Matt notes that, stripped of story,  it “simply boils down to plopping cards in slots, waiting out timers”, and of course he's right. But it is very adept at harnessing that machinery to its tale of an obsessive, addictive pursuit of forbidden knowledge. In the same way, the remarked-upon lack of tutorial – the enforcement of ignorance – is entirely necessary. Just like the simulated cultist, the player is lost in the woods, groping their way slowly to enlightenment one occult scrap at a time.

There's no denying it’s frustrating when you lose because you're not sure what's happening. With no tutorial and the hints often rather subtle, I missed some important aspects of the game. It took me several playthroughs, including most of the way through one ultimately successful cult, to realise I could perform rituals and summon inhuman Things from beyond the veil without plopping a card in the Desire slot (the fifth and final slot for all spells). And I only figured out you could buy things from the auction house, as opposed to just selling old tat, while I was working on this article. I lost many poor naïve acolytes to bungled raids on the houses of rival occultists before I grasped that the Threat icons that appear during a mission will tell you, with very little obfuscation, how best to counter them. 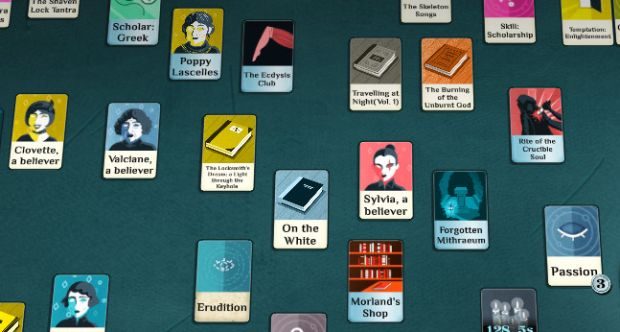 However, that's the key thing in nearly all my catastrophes: they came from my ignorance, not from the game screwing me. It's far more common that I get greedy and attract too much attention from the authorities, or miss Despair or deadly Fascination (cards that accrue naturally from your activities but end the game if you collect too many without dispelling them) all because my attention is elsewhere. Often, through trial and error, I learned that most of my ends were preventable. Most threats have at least one counter. Some have more. And, crucially, discovering what I don't know is a joy.

As with Sunless Sea,  it follows roughly rogue-like rules. While there's no tutorial, the player isn't without help. Cultist Simulator, like the negotiator of any good Faustian bargain, is up front about its terms. “Explore. Take risks,” suggests the loading screen. “You won't always know what to do next. Keep experimenting, and you'll master it.” Ignorance is expected. Failure is normal. For me, being told point blank I wasn't supposed to know what I was doing let me relax and accept the mystery. 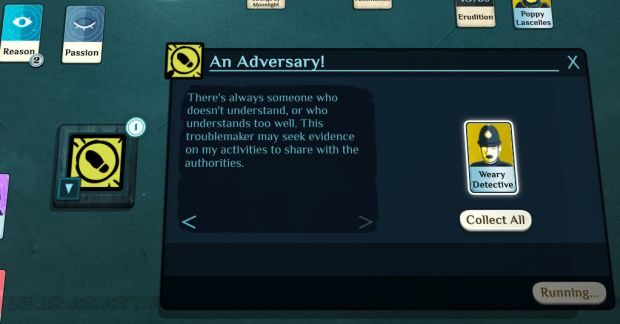 And, again, there are hints; there are always hints. They may not make sense at first. A card marked "Grail" may tell you little, except that it “honours both the birth and the feast”. But then while raiding one of the game’s many secret locations (one of the best ways to acquire new and useful items) perhaps you encounter a monster that yields to “the Mother’s power”, and you realise your Grail can counter it. The more you know, the clearer the hints are. The more you fail, the more you know.

The game is also pretty good about giving you chances to escape disaster, invariably by sacrificing something valuable, like your health, or your disciples. In the early game, before you have a cult of your own and a follower or two, you're vulnerable. But the more your cult grows, and the more you discover, the more you have on hand to sacrifice when your back's against the wall. Again, the journey from ignorance to enlightenment sells the fiction. And goes some way to offsetting sudden catastrophic losses, which is vital to keeping the game fun later in a run when the player has more to lose. 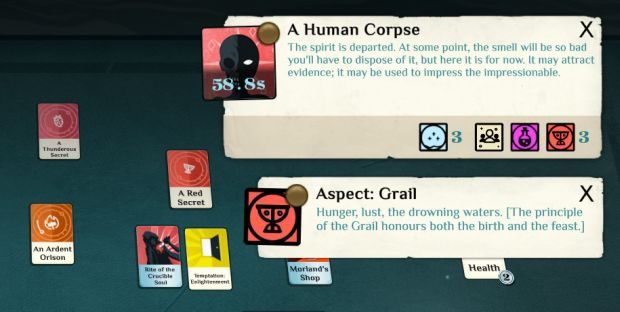 Just as its card-collecting and tile-plopping support a fantasy of obsession and order as you forge a successful cult (or not) from the chaotic fragments of this world, the initial ignorance of the player puts you in the same place as your character. Figuring out how the pieces connect, realising how to pass a gate in your dreams or new uses for a ritual makes me feel like I'm uncovering something hidden. I can't remember playing another game where magic feels so much like actual magic.

In most games, even most roguelikes, it's the environment that's hidden and your abilities which are known (or soon imparted). You have ignorance of what will come, but not what you can do. The result is that magic in most games is systematic and reliable to the point where it feels like engineering or, worse, little more than a bedazzled gun. 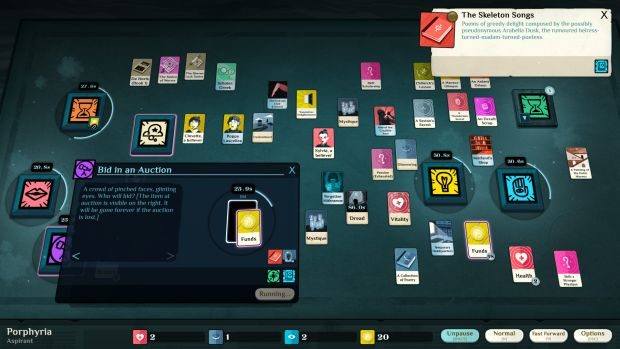 Cultist Simulator reverses this: you have a rough idea of the terrain, but your potential is hidden from you. Magic is still a system (by necessity -- it's a videogame) but it is intentionally mystified. The result is a system of magic that still feels wild, dangerous, seductive. And when I'm throwing things together based on intuition and hints, scribbling down indecipherable notes to make sense of what I think I know, I don't just feel like a magician; I am a magician. Magic, after all, is the nothing more than the knowledge of secrets. With each life and each sad, strange death my characters suffer, I gain more of that knowledge. No mind is ever wasted, even the ones devoured by the terrible light of the Mansus. Especially the ones devoured.

This lack of tutorial won’t please everyone, but if you can embrace the mystery, the maddening course of enlightenment will make it a joy. Ignorance may not be bliss, but it's an essential part of what makes Cultist Simulator so enticing.