Spintires: MudRunner is a game about driving slowly through mud. It’s beautiful and detailed but also gruelling and unforgiving. The first level took me 3 hours and 21 minutes to complete, during which I drove 18.64 km. That means I averaged slightly less than 6 km per hour. It’s less Fast and Furious and more Grimy and Gradual.

I’d struggle to describe it as 'fun' without caveat because much of the game simply isn't. Most of the time you’ll be driving a heavily laden lorry slowly along a muddy track, wheels slipping on the mud, dreading the moment when they bog down and spin helplessly with little hope of escape. It’s probably not what most people would choose to do in their free time. There’s a constant nagging thought that I could be doing something, anything, more enjoyable and productive.

Yet the game has beauty. Getting stuck in the mud in the early hours of the morning, with no sign of civilisation nearby, evokes a feeling of strangely realistic isolation. Your reward for perseverance is the dawn, which varies from crisp yellow sunlight forking through the trees to a dirty orange glow that lights the woodland in colours reminiscent of Firewatch, if Firewatch was set in a sodden peat bog in darkest Russia. 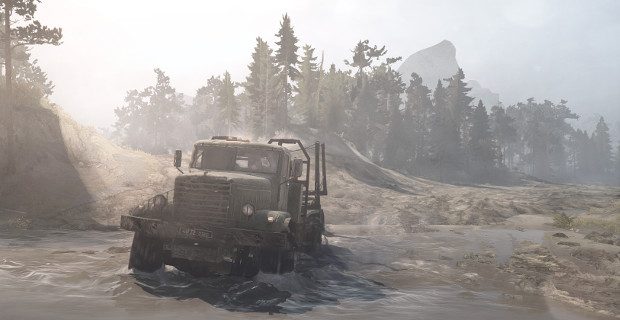 At the end of the first level I felt exhausted and filthy and yet triumphant. I felt like I'd really spent several days struggling through mud.

What mud it is, too. MudRunner has the most realistic simulation of water and muck I've ever seen. Tyres become clogged with it almost immediately, spinning and burying themselves, your truck pitching and wallowing in a realistic manner. You drift sideways as you attempt to cross rivers, wheels shiny and wet as they cut gratefully into the relative dry of the opposite shore. Apparently simple open patches of ground turn into shifting liquid nightmares as you sink terrifyingly into the ooze, your wheels cutting messy lines into the soft ground. Exhaust belches angrily, dented and rusting bodywork becomes spattered and stained, undergrowth lodges in the chassis. 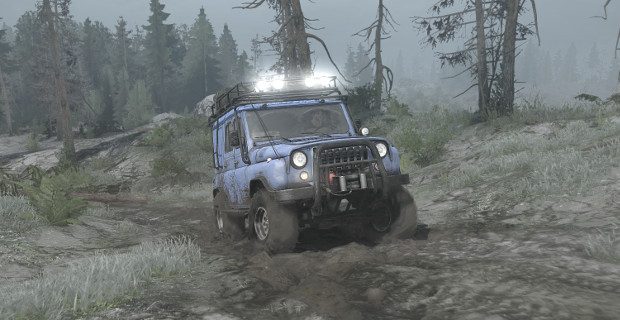 But is it a good game? Full marks for simulation, but the impatient may never play it more than once. Why accurately simulate getting stuck in mud, when you could be churning through it at speed like a happy hippo?

In many ways MudRunner feels like a technology demo. The mud is amazing but so much potential is left unexplored. There are hints of it in the challenge mode, where levels include crossing a wide river, climbing complex hills and rescuing stranded vehicles. All are engaging, but little of this appears in the main game. 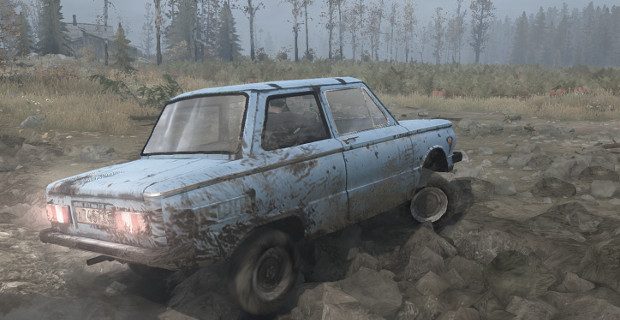 Yet there is something compelling here. I want to keep playing. I want to find and master every vehicle. I want to unlock every level and complete every challenge. I want to ford mighty rivers and shout my defiance into the wilderness. Churning slowly through the mire is hard work, but MudRunner simulates it so well that it’s a joy to behold. A small and repetitive joy, perhaps, but a joy nonetheless.