I’ve been virtually flying Spitfires for as long as I can remember. I’ve shot down scores of Stukas, maimed messes of Messerschmitts and hunted hosts of Heinkels. But never have I thought about who refuels my plane when I get home for tea and medals. Who reloads the guns, patches up the bullet holes, and grumbles about me putting too much stress on the engine. Plane Mechanic Simulator changed that.

The game is exactly what its name implies. You’re a lowly RAF mechanic, tasked with maintaining spitfires in the lead-up to and during the Battle of Britain. When the spitfires come home you pull apart their engines, fix the broken bits and send them off again. The game is a refreshing foray into a rarely portrayed part of war. But even so, I wasn’t expecting to be engrossed by its narrative framing.

At the start of each mission you’re given a clipboard with a checklist. ‘Refuel the aircraft’ ‘Harmonise the guns’ etc., along with a note from your pilot, Peter. A single sentence describing what he’s done to your plane. It’s flavour text, there to add a dash of problem-solving to finding the faults. But it’s also so much more. Through these little handwritten notes, you begin to feel like you know Peter.

He’s not just a mouthpiece for the game to tell you what part to repair. He’s a person, dammit. While the notes remain short and to the point throughout, irrelevant information occasionally slips through. A sarcastic comment about Intelligence being right for once, excitement at his first kill. You learn to gauge his moods, whether declining or rejuvenated. 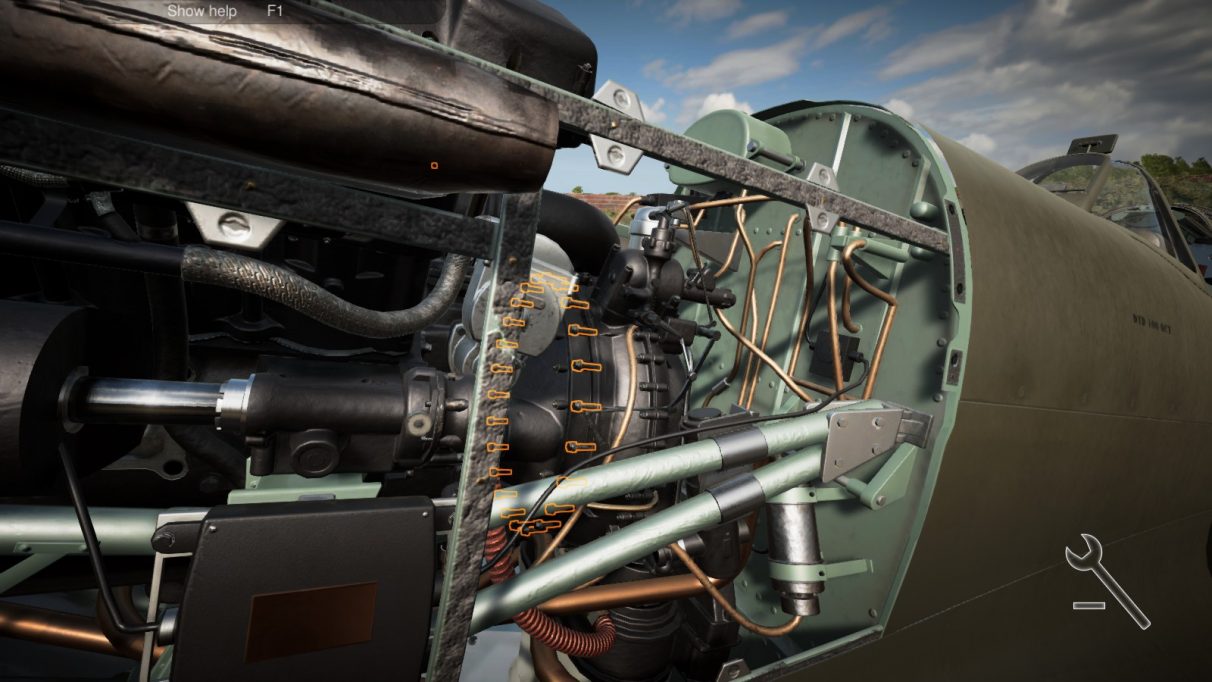 The beauty of this framing is that Peter’s emotional state is reflected by the player. If he’s annoyed by a boring, uneventful patrol, your maintenance is just as dull, involving no more than refuelling the aircraft and the occasional oil top up. If you’re lucky you might have to replace a popped valve. Just like Peter, you want to see some action, you want things to ramp up. And suddenly, the ‘boring patrols’ disappear. The RAF are losing more aircraft by the day, you don’t have the luxury of taking your time anymore, and this plane needs to be in the sky now. Plane Mechanic Simulator starts throwing time limits into the mix.

The zen of the early game is gone, forcing you to sprint around, frantically pull the wings open to shove more ammunition inside, and patch an ever growing number of holes. You’re not up there, locked in a life and death duel like Peter is, but the game has you endure the same stress and exhaustion he expresses in his ever more terse notes. And through this, you feel for him. You celebrate his victories, cover his mistakes, and commiserate his lost friends.

Plane Mechanic Simulator doesn't need a framing device. You can play through the game without reading any of the pilots’ notes. You can even turn off the time limits to keep it relaxing if stress isn’t your cup of tea. Yet, like the planes themselves, against all odds, the story works.