If you click on a link and make a purchase we may receive a small commission. Read our editorial policy.
Developer: Novectacle
Publisher: MangaGamer

Visual novels arguably have less to impress gamers than other genres. With no real ‘gameplay’ to speak of, visual novels need to rely heavily on narrative prowess to make a lasting impression. Originally released in Japan in 2012, but only getting an English localization in 2016, The House in Fata Morgana is pegged as a horror visual novel. As the player explores the desolate mansion and views the different tragedies of the past, however, the game slowly unravels its tangled plot threads, revealing that it’s much more than just a compilation of sad tales.

The House in Fata Morgana starts off with the player waking up with no memory, greeted by a mysterious Maid. She appears to be distraught at your loss of memory, and encourages the player to explore the mansion through different time periods in hopes of regaining them. Fata Morgana uses superb writing and the trappings of the visual novel genre to consistently drive players to what they’d consider natural answers to the questions the game poses, before pulling the rug out from under them. But crucially, when these twists are revealed, the revelations are never completely out of left field. The foreshadowing is there, but there’s far more subtlety employed with the truth than with the false conclusions the game wants you to come to. 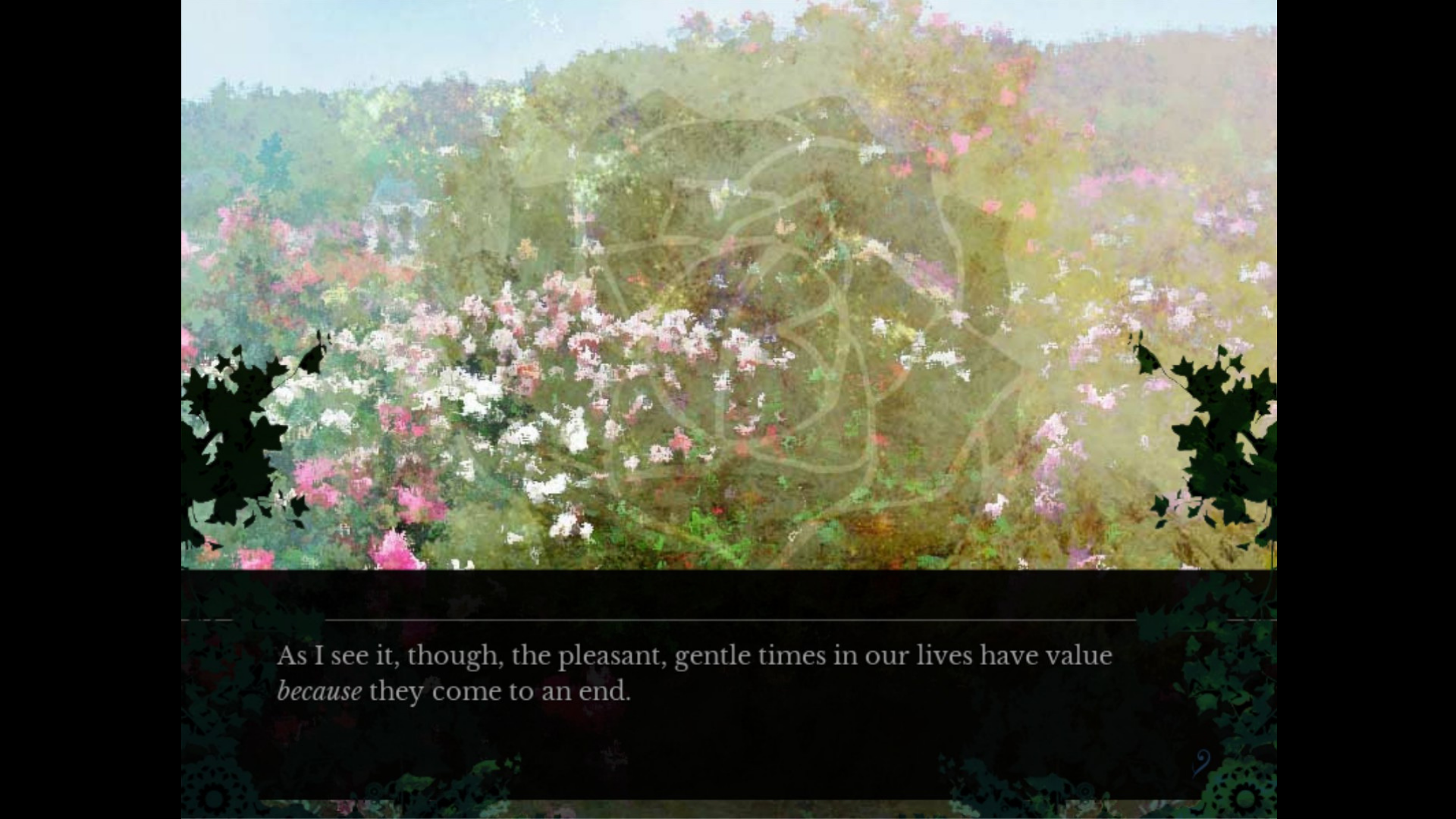 The first time you see this deception is through The Second Door. The second story of the mansion talks about a beast living there, a bloodthirsty monster that lures travelers and villagers to their gruesome demise… until The White-Haired Girl enters its life. It becomes clear that The White-Haired Girl has a strong connection to the mansion, and the beast decides to not kill her. In the time they spend together, the beast begins to act more like a human, wishing that it wasn’t a monster and to live a peaceful life with The White-Haired Girl. It’s a familiar story.

Players will be quick to realise that these tales end in tragedy, and the march towards the unhappy ending in this particular story starts early on. Another character has come to the town nearby looking for her lover, a merchant that went missing in the area. As the beast becomes more human and the girl discovers more about the strange events surrounding the mansion, the astute player will probably guess at how this story will end... but it doesn’t quite play out as expected. 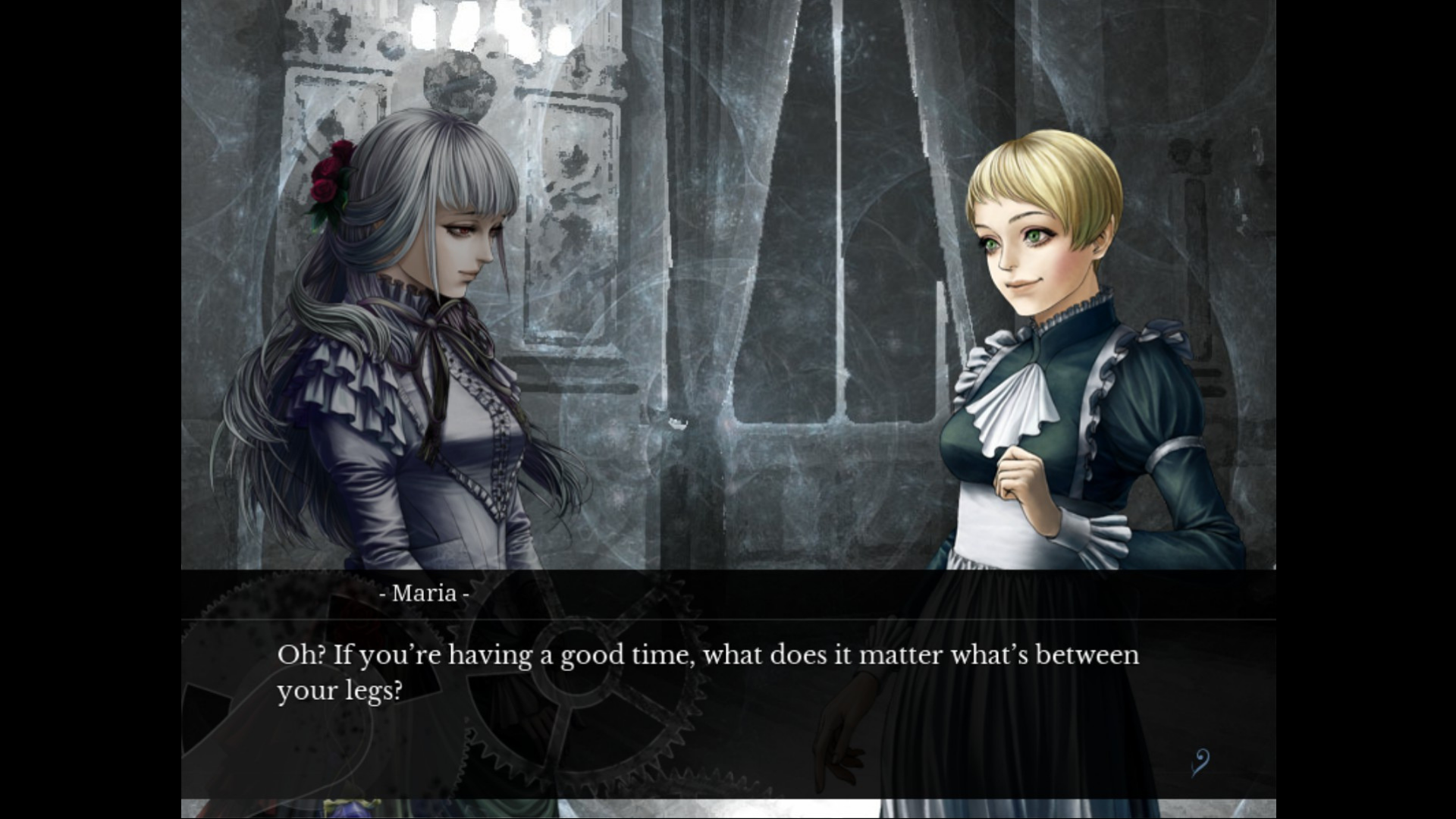 This is merely the first time The House of Fata Morgana plays on your expectations. In this chapter alone, the game uses clever visual cues, The White-Haired Girl’s behaviour, and more besides, to obscure the truth from the player without hiding it entirely.

The reveal behind The Second Door is only a taste of what is to come, though. As The House of Fata Morgana progresses, more questions pop up -- “Who exactly is The Maid?” “Who am I?” “What are the unusual visions I’m having?” -- but even as the game provides answers, the player still has to unravel the actual truth behind it all. Little of it is what you’d expect.