If you click on a link and make a purchase we may receive a small commission. Read our editorial policy.
Developer: Edmund McMillen, James Interactive, Ridiculon
Publisher: Edmund McMillen
Release: Out now
On: Windows
From: Steam
For: £10/$13.50/€11

Bum-bo has to deal with a lot of crap. Sometimes that crap is very literal, sentient, and coming straight for him. Sometimes, the crap is still literal, but it's his tool and his shield. It fuels his nightmares, and his special abilities. It's his deuce in the hole.

Crap jokes feel inevitable here, because The Legend Of Bum-Bo is a prequel to The Binding Of Issac. It's set in the same universe, which is one governed by pee and sweat and poo. Despite this, however, it's a very different kind of roguelike, which swaps out twitchy exploration for turn-based, match-four puzzle grids. I've grown to quite like it, even though at first it made me want to tear my hair out and throw clumps at Edmund McMillen's disgusting menagerie, potentially adding to it in the process.

Bum-bo is a balding man who has just jumped into a sewer, in pursuit of a shadowy monster that's stolen his coin. This is explained via a sixty second cutscene resembling a child's drawing, in the same style as Isaac's, only this time narrated in wacky bum talk. I'm not a fan of the wacky bum talk, but that's no big deal because the opening is one of the rare occasions when the narrator (presumably, lead bum Bum-bo himself) intrudes on the puzzling. The puzzling... takes more explaining. 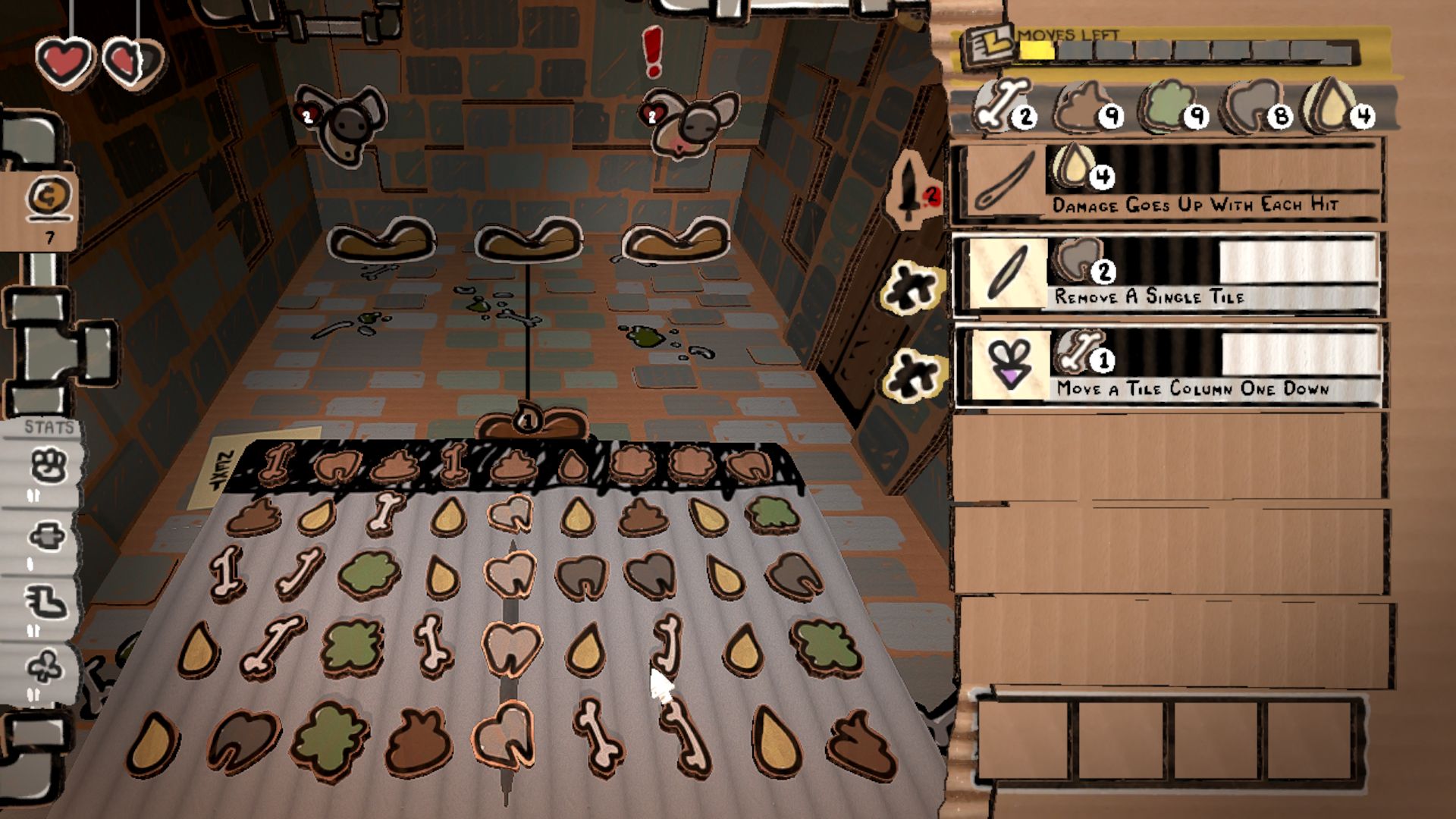 Every room in the sewers contains a handful of cardboard horrors. The rooms themselves are cardboard, in fact, and most attacks and abilities appear as cut-outs on the end of thin little sticks. It's a puppet show for troubled toddlers, and developers McMillen and James Interactive should be pleased with this 'new but old' aesthetic avenue. This is a good new dimension for morbid dungeoneering, and I'd expect nothing less from the man who made these.

The cardboard monsters trundle towards you along three separate lanes, and you deal with them by aligning four or more matching symbols on your puzzle grid. You will throw teeth and bones for damage. You will cover enemies in snot that tangles them up for a turn, and cover yourself in sweat or urine (I can't tell, it may well be a mix) that grants you extra moves. And you will throw up poo as a defensive shield. 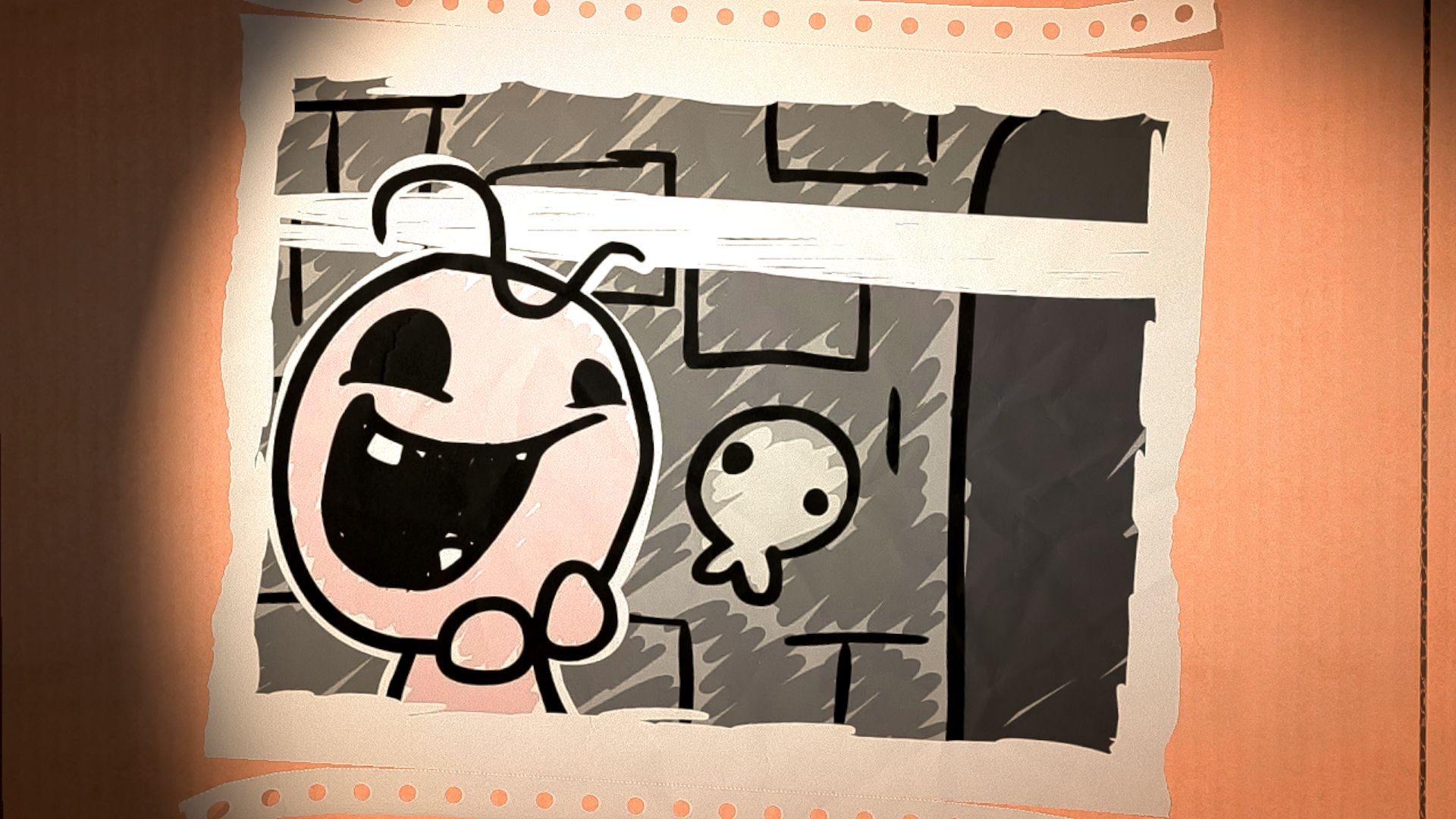 Those are the basics. During each fight, you usually get two chances to shuffle columns and rows across the grid, and success is about doing as much as you can in a single move: getting new alignments in place while prioritising existing rows of the elements you need. Of course, the game doesn't call them elements, but the idea that Bum-bo's universe is fundamentally comprised of grimly bodily building blocks is too compelling to resist.

However, each time you line your shits up in a row and clear them from the board, you don't just throw them away. The various chunks and fluids are pocketed (urgh), where they become mana for your spells. This is where the deck-building part comes in, and things get cleverer.

Spells do all sorts. They might do straight up damage to a a target or two, or they might let you shuffle tiles around in some specific way. One of my favourites removes all the tiles of a particular type from the board, then throws them at a monster of your choice. This one does damage based on how many tiles of that type are being flung, so it combos nicely with a urine-powered spell that increases the number of a tile type of your choice. But! An even smarter plan might be to check for tiles whose removal might result in another tile match going off. An even smarterer plan would be to carefully engineer such a situation. It's a lot. 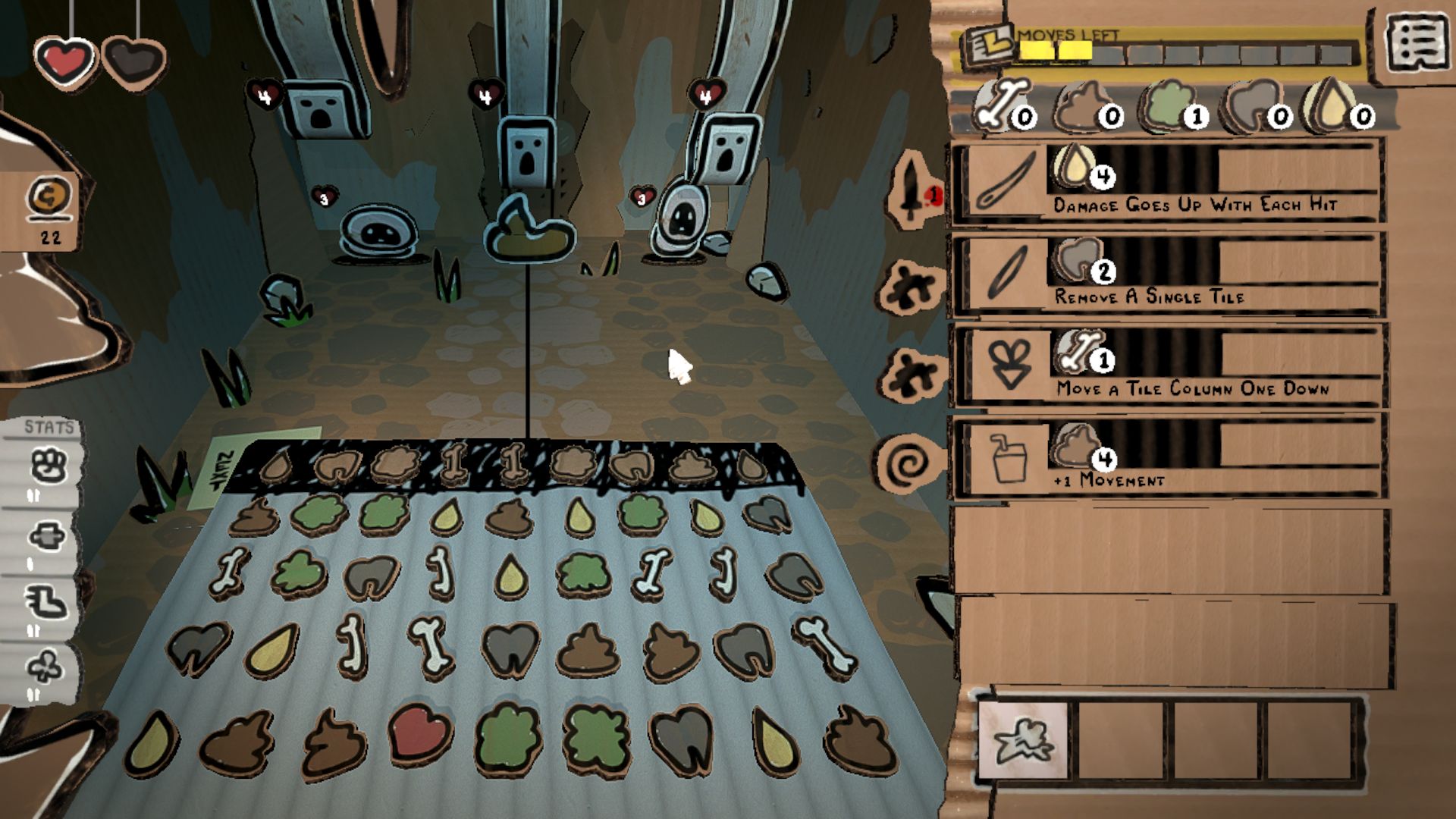 That's part of what bothered me at first. I'm prone to analysis paralysis, and I spent my first few hours eyeing up grids for far longer than I needed to. Many situations are simple enough to make figuring out an optimal turn plausible, but complex enough that you'll only see it if you squint for a solid minute or two. If Bum-Bo were a board game, my fellow players would probably have shoved me off my chair and taken my turn by the time I made my move. Part of me would have wanted them to. This was admittedly mainly an issue with my foibles, though I do think a fair few people will overthink their way into the same trap I did.

My other main problem was a bit more universal, and boiled down to the fact that encountering new enemies often led to me taking damage because nothing except prior experience could tell me how they would behave. Learning how to deal with new situations is basically the central appeal of roguelikes, sure, but they still have to feel fair. Losing a Bum-Bo run because you didn't know tossing a turd at poison gas would make it engulf you is neither a happy experience nor an interesting failure. Deaths like that make me dearly miss the clarity found in Slay The Spire, where enemies politely tell you exactly what they're up to. 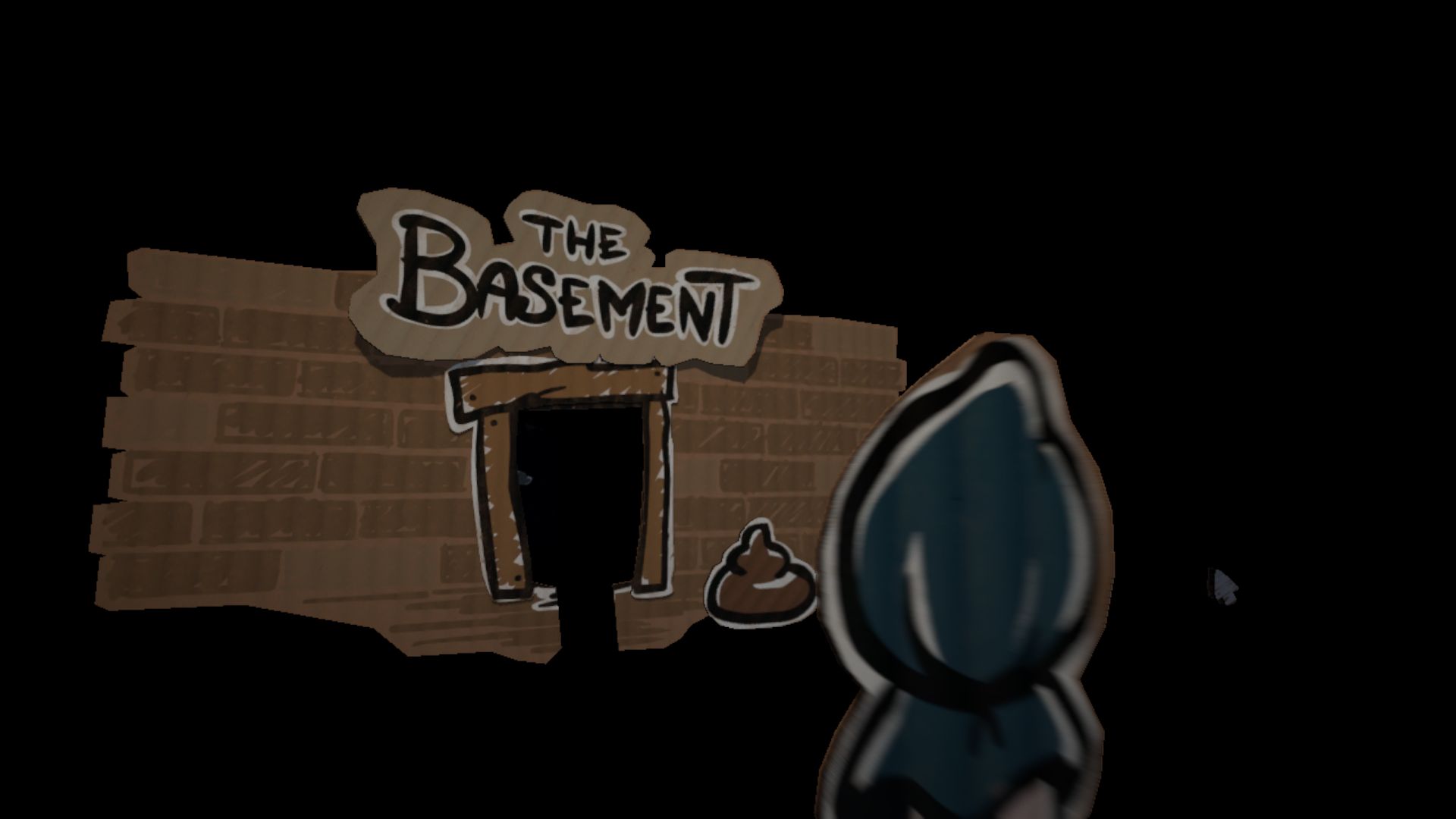 There's a particular kind of unease that comes with being forced to make high-stakes decisions while lacking vital information. That discomfort often outweighed my enjoyment as I bumbled through the early game, unlocking new characters that started off with different abilities. Gradually, though, the stream of new enemies slowed to a manageable trickle. I also trained myself to agonise less, plumping for the first good turn I spotted rather than furrowing my brown in search of an unnecessarily superior one. I'm a lot more comfortable now, in more ways than one.

In the end, Bum-Bo can't live up to Isaac - You combine abilities in clever ways, sure, but it's more about the cerebral pleasure of efficiently translating teeth into damage numbers, than the wild and unpredictable interactions of Issac's many items. I don't think the aim was to replicate, mind, though there is a certain structural similarity there. And besides, you can't judge everything by the standards of a classic.

Those who played Isaac will know that the dungeon's depths go further than they first appear. I've reached an ending in Bum-bo, of sorts, but I know better than to call it quits now. My irritation has faded into pleasant satisfaction, and I'm curious about what areas and abilities still lie beneath me. Bum-bo may have to deal with a lot of crap, but it's all well worth pushing through.