What's a holiday to The Outer Worlds without Companions to share the journey with? Obsidian's latest open-world(s) RPG provides you with six different Companions to bring aboard your ship, the Unreliable, and help you in the quests and battles you'll face time after time throughout your journeys. Each Companion has different personalities, skillsets, side quests, and combat powers - and our The Outer Worlds Companions guide will walk you through each of them in turn, so you know which companions are the best for each situation you find yourself in. We've even got a list of all the perks, including the ones unlocked by completing the Companion Quest.

The roster of Companions available in The Outer Worlds offer you a great deal more than just a helping hand in battle (though they are also very useful in this regard). I can't help but compare them to the companions of the Mass Effect series (particularly Mass Effect 2) in each of the things they bring to the table:

You can choose whether or not to take Companions with you; if nothing else, they can serve very useful as cannon fodder. But if used correctly (using the commands to move to a specific location and attack a specific enemy) then they can prove very useful in battle themselves.

Now let's take a closer look at each of the six Companions of The Outer Worlds in turn, detailing where you can find them and what they may bring to your party. 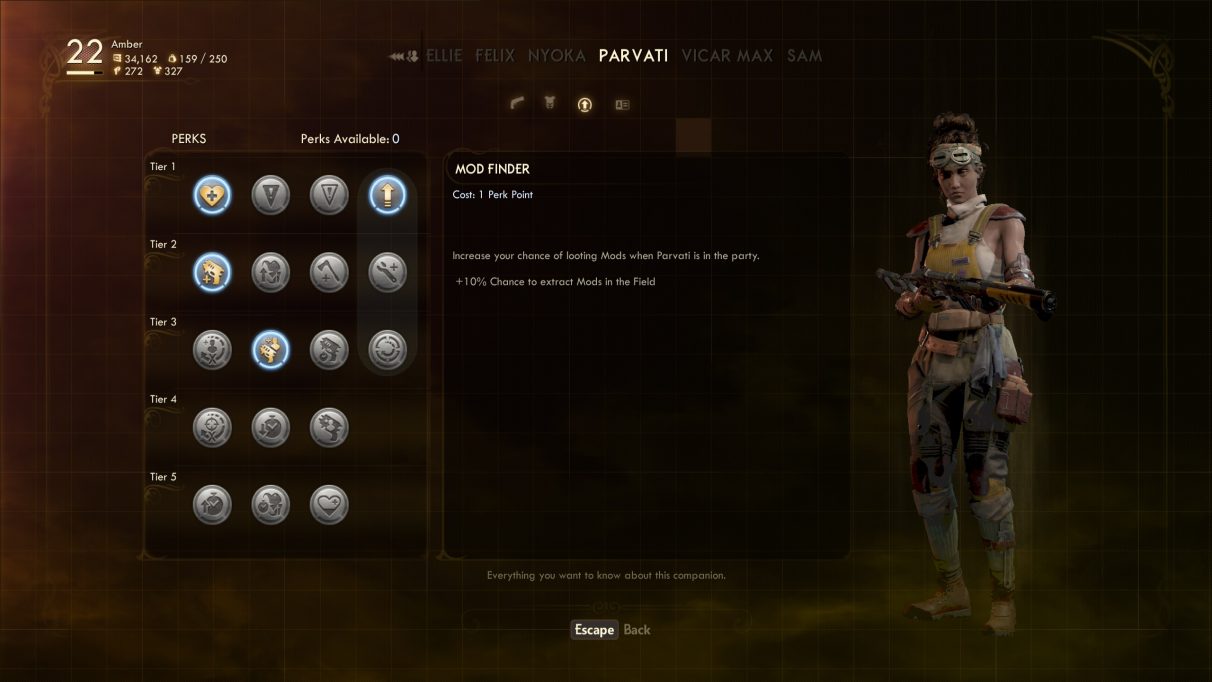 Parvati is almost certainly the first companion you'll come across if you stick to the main missions at the beginning of the game. She speaks the language of ships and machinery, and she has a rather sweet side quest all about helping her work up the courage to ask someone out. She's my go-to in combat as well, mainly because her Overload ability is tremendously useful, capable of disabling an entire band of enemies at once for a short time if used at the right time. 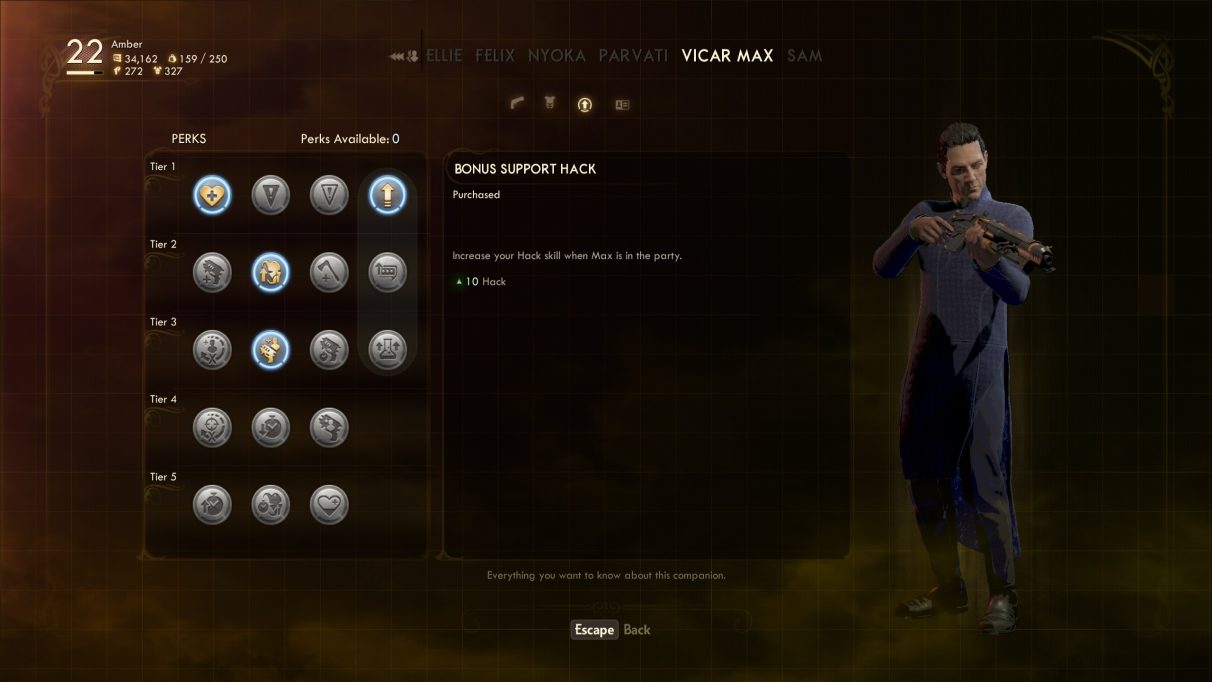 Vicar Max is the other companion you can find in Edgewater, and is therefore likely the second potential companion you'll cross paths with. Without giving away spoilers for those who haven't yet got there, there's rather more to this unassuming vicar than meets the eye. I keep him around mainly because of the bonus to Hacking, which can come in handy wherever in the solar system you find yourself. 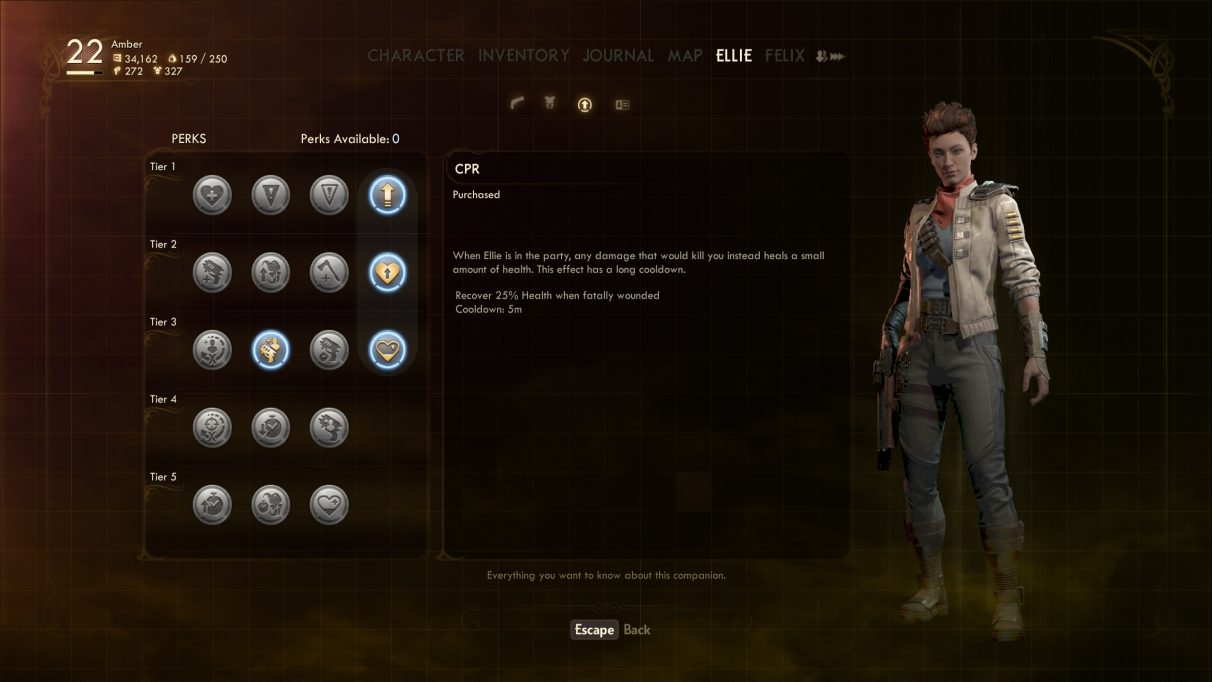 Ellie is based on Groundbreaker, the sister colony ship of the Hope (the ship you begin the game in cryosleep on). You'll need to solve a problem for her before she agrees to come with you, but once you do you'll have access to what is most likely the most practical and useful set of Perks of any companion. High survivability is very important in The Outer Worlds, particularly on the higher difficulty levels; and Ellie is very good at keeping you alive once you unlock the three above Perks. 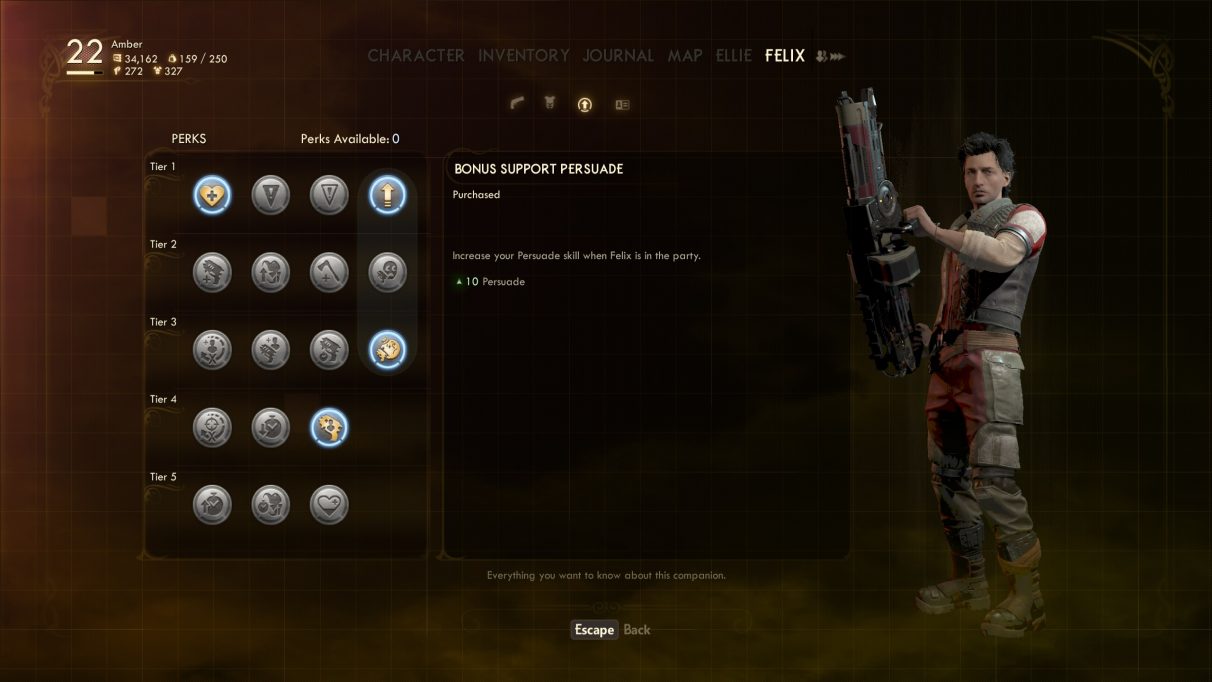 Felix is also based on Groundbreaker, and you'll probably run into him very quickly after landing there for the first time, as he'll be busily having an argument with a soldier in the docking bays. While it may seem like he has a problem with authority, he insists it's simply that he doesn't suffer fools gladly - and he'll quickly prove himself a worthy member of your party, if only because that +10 to your Persuade skill is really wonderful for opening up hidden dialogue options. 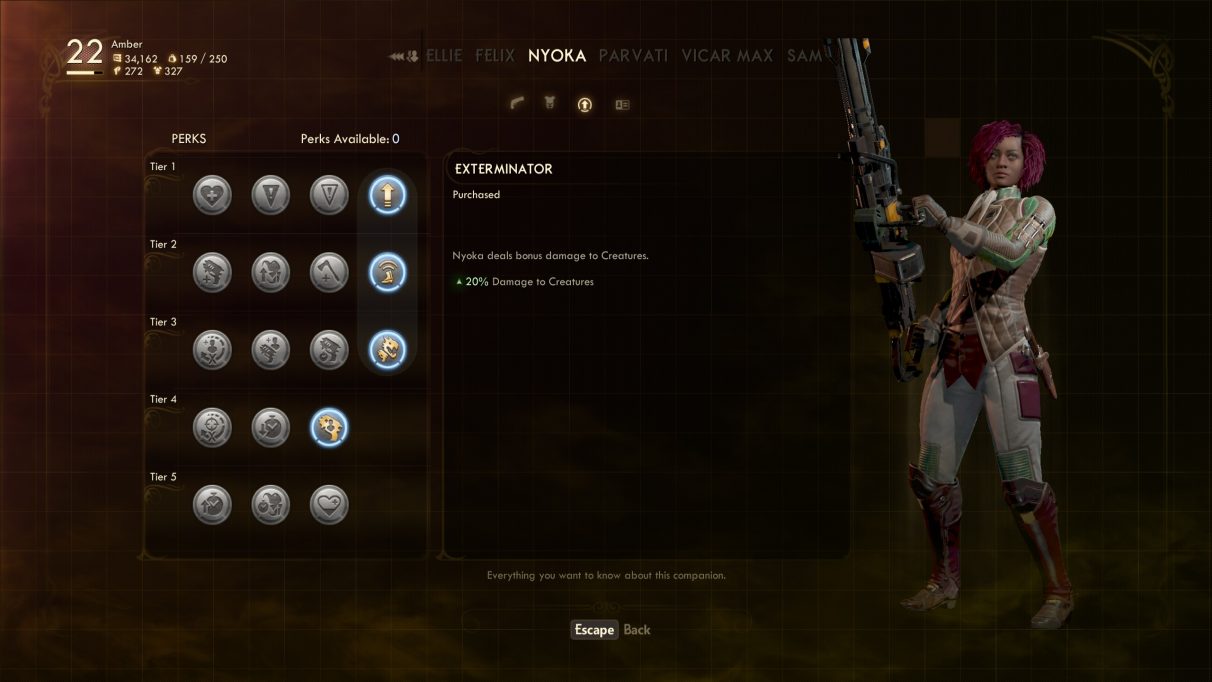 Nyoka resides a little further afield than the rest, busily getting absolutely hammered in a bar on Monarch. But once sobered up she'll quite readily join your party, and in combat she'll definitely prove her worth with her flashy Barrage ability, and a boost in damage against creatures - of which you'll fight plenty, believe you me. Plus, if deception is your character's forte, you'd be remiss not to include Nyoka and her +10 to the Lie skill in your party. 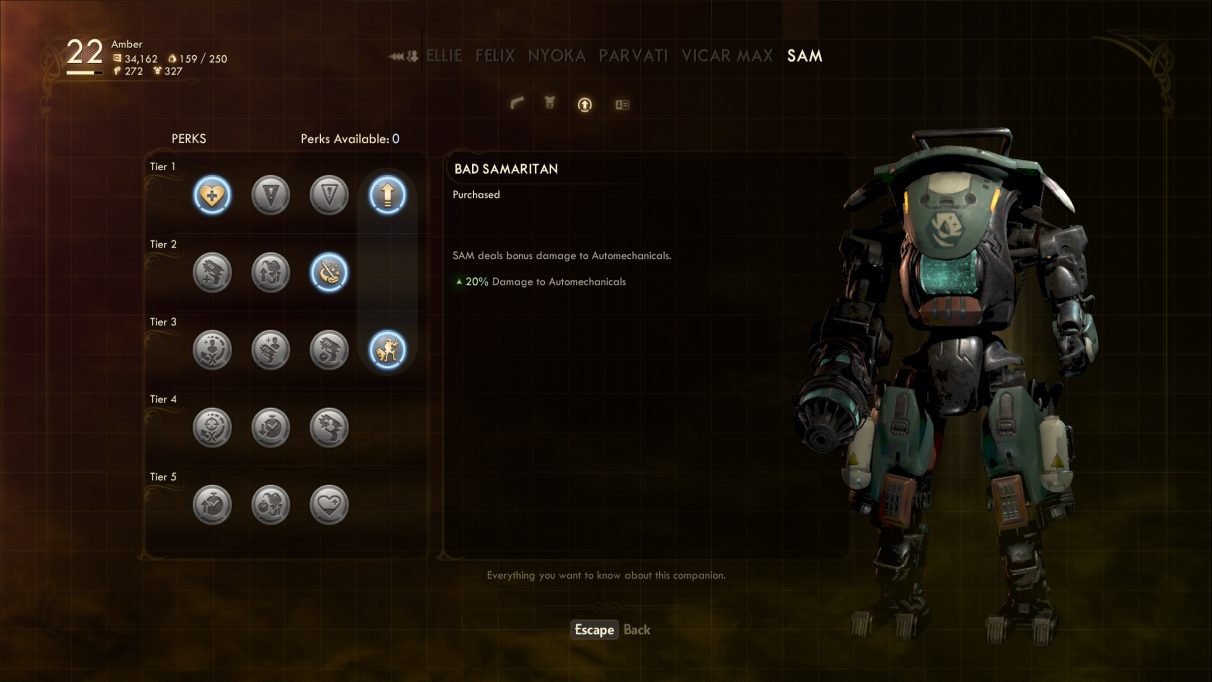 Finally, there's SAM - the Sanitation And Maintenance automechanical that you'll find upstairs on your ship, the Unreliable. You'll need a couple of bits and bobs to get him operational, but after that SAM will be entirely fit to accompany you on your travels, and clean up after your messes. He also rounds off the holy trinity of personality-based companion bonuses, with a +10 Intimidate to enjoy. He's also a powerful ally in combat, particularly against fellow Automechanicals. 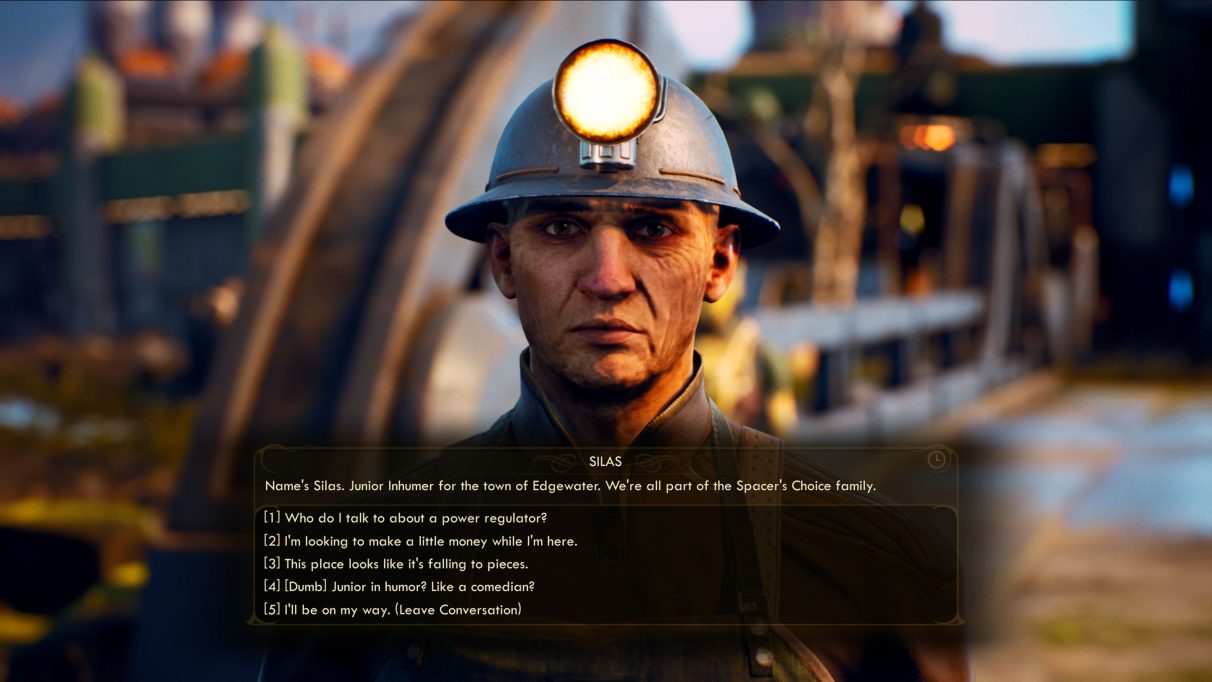 And there we have it! Your six The Outer Worlds Companions are out there, waiting for you to release them from their daily urban grind so they can accompany you on your interplanetary journey. Make use of them! They're not so bad. I promise.