The Workbench in The Outer Worlds, among many other useful things, gives you the ability to apply all sorts of powerful mods to your weapons and armor. This alone makes the Workbench one of the greatest tools available to you, and the best part is that you can find at least one in pretty much every region of the game, including your own ship, the Unreliable.

Our The Outer Worlds Mods & Workbench guide will ensure that you know exactly how to use this powerful piece of tech! We'll go over tinkering to improve weapons and armour, adding mods to weapons, repairing damaged equipment, and more. 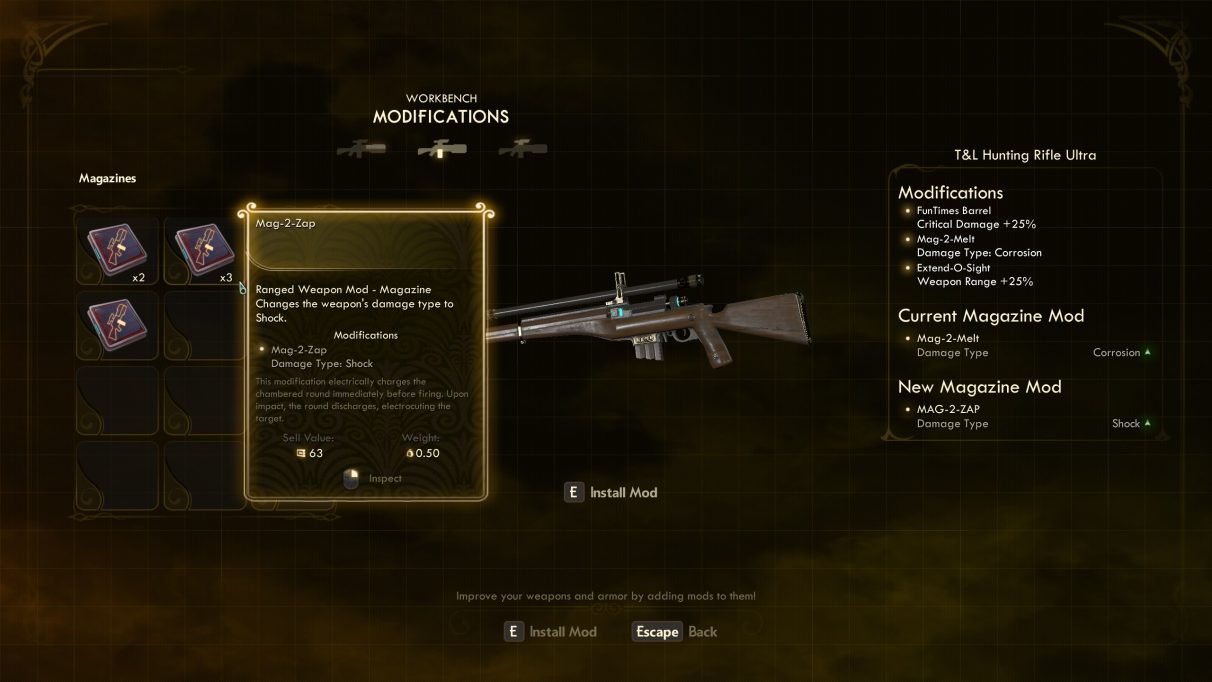 The Workbench in The Outer Worlds is used for multiple tasks, all of which involve maintaining and upgrading your weapons and armor. Below are the key functions of a Workbench in this regard:

Now let's take a closer look at the primary functions of the Workbench in The Outer Worlds, and how to use each one properly and to full effect. 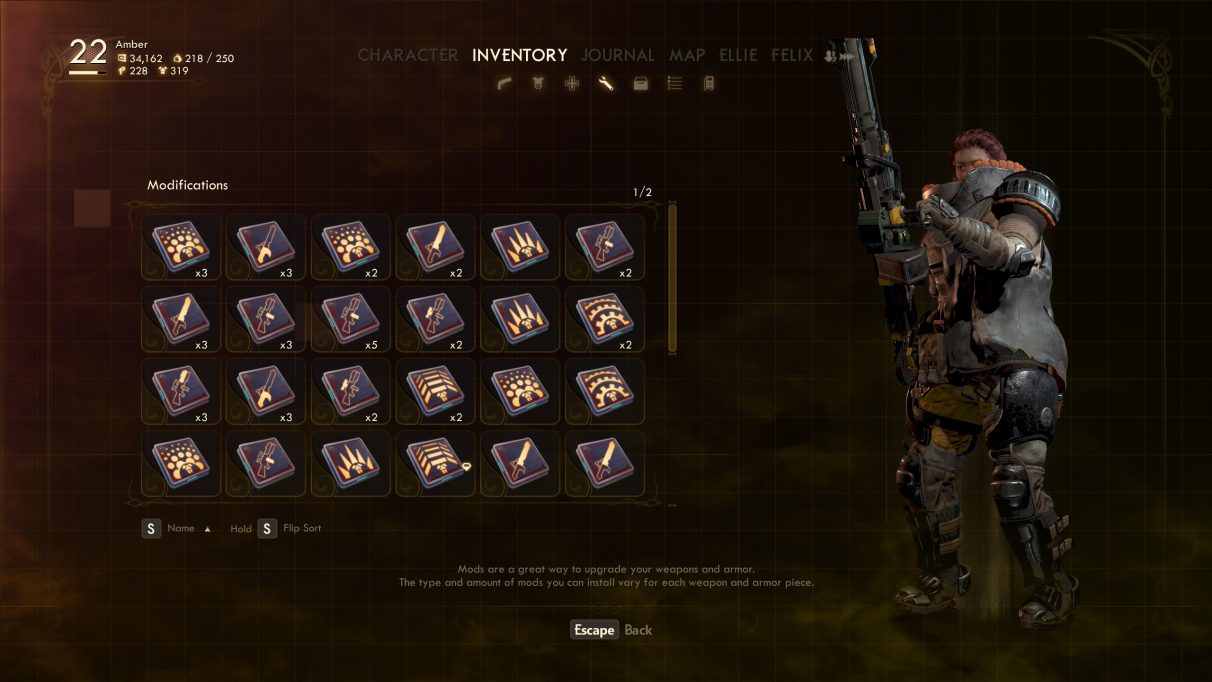 How to install mods - modify using the Workbench

One of the most important aspects of using the Workbench to upgrade your equipment is using the Modify function to attach mods such as scopes and magazines to your weaponry, or to your armor. To do this, interact with a Workbench, then navigate to the "Modify" option, select a viable weapon or piece of armor, and select "Install Mod". You'll then be presented with a screen that allows you to choose between the available mods to attach to different parts of your chosen equipment.

Most equipment will have two or three slots where mods can be installed, and each mod will only accept installation into a particular slot type. For example, you can't add a Magazine mod to the Barrel slot of your weapon. You can switch between the available slots in your equipment by selecting the icons displayed under "Workbench Modifications".

Choosing the right mods for the right equipment is very important for maximising the potential of your gear. For example, a mod that reduces recoil might not matter too much on a bolt-action rifle, but it will be much more beneficial on an Assault Rifle or LMG.

Another very important aspect of installing mods onto weapons, in particular, is that you can install certain Magazine mods to change the Damage Type of your weapon, making it more useful against certain enemy types. For full details on Damage Types, check out our The Outer Worlds Weapons guide.

And finally - there's a semi-permanence to installing a mod in a piece of equipment. You can replace it with another viable mod if you wish, but the previously installed mod will be destroyed. So make sure you're installing the right mod on the right piece of gear! 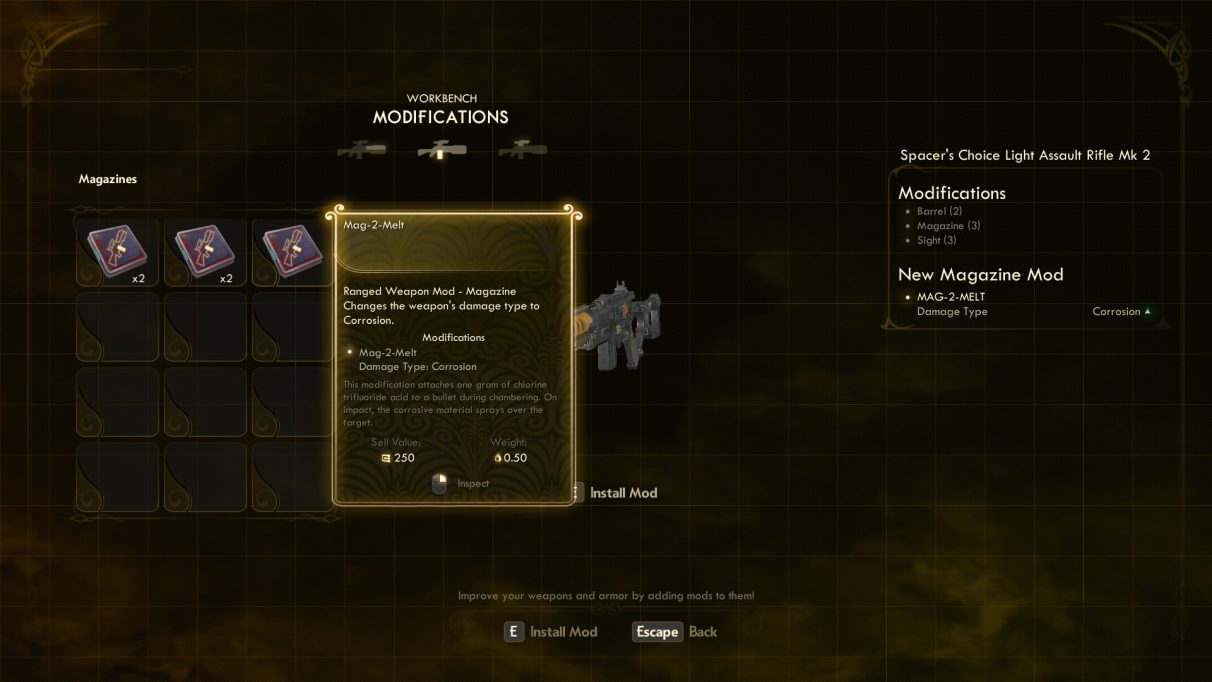 Now you know all about the mods, here are all the mods you can find in The Outer Worlds. They're separated into three different categories: Ranged, Melee, and Armor. 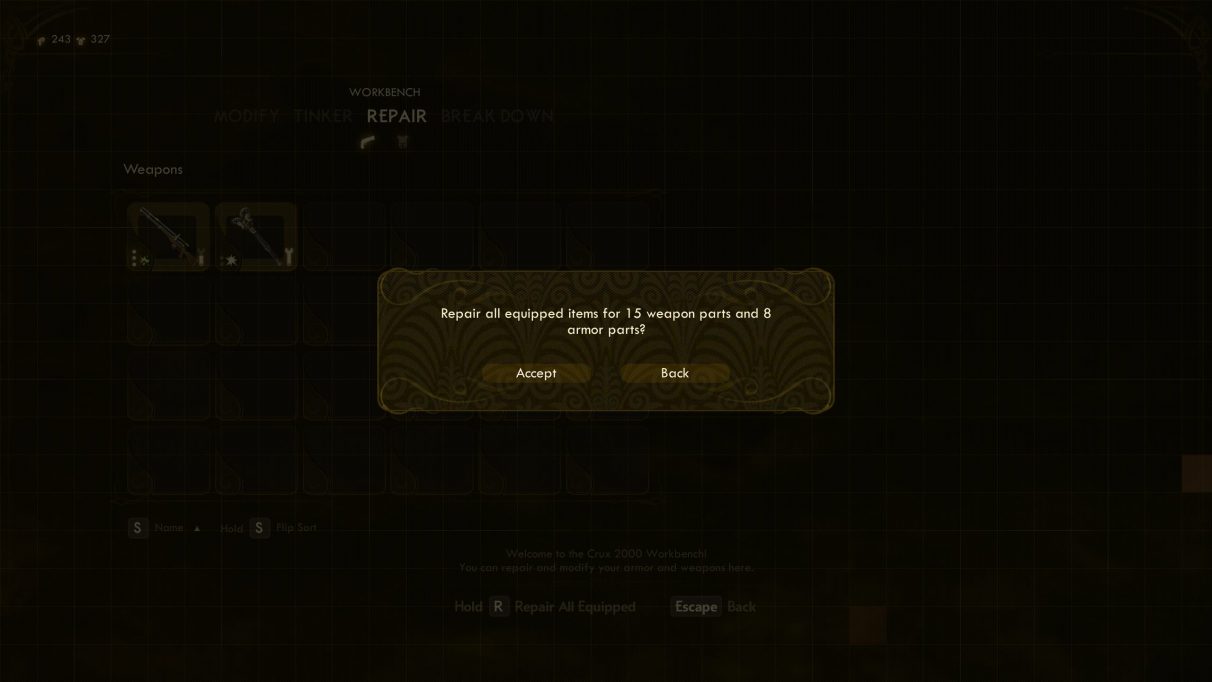 Another very important aspect of maintaining your equipment which the Workbench can help accommodate is the repairing of damaged weaponry and armor. Each weapon or piece of armor you use has a durability meter which gradually depletes when used. As it depletes, the equipment's effectiveness is reduced. For weapons, this means lower damage; for armor, this means a lower armor rating.

Using a Workbench, you can repair damaged items, bringing their durability back up to 100% - in exchange for Weapon Parts and Armor Parts. These Parts can be acquired by Breaking Down unwanted weaponry and armor (another function of the Workbench). But it's important to note that as long as you've got an Engineering Skill of at least 20, you'll be able to do both these things (repairing and breaking down) from your inventory, and will not have need of a Workbench to do this. 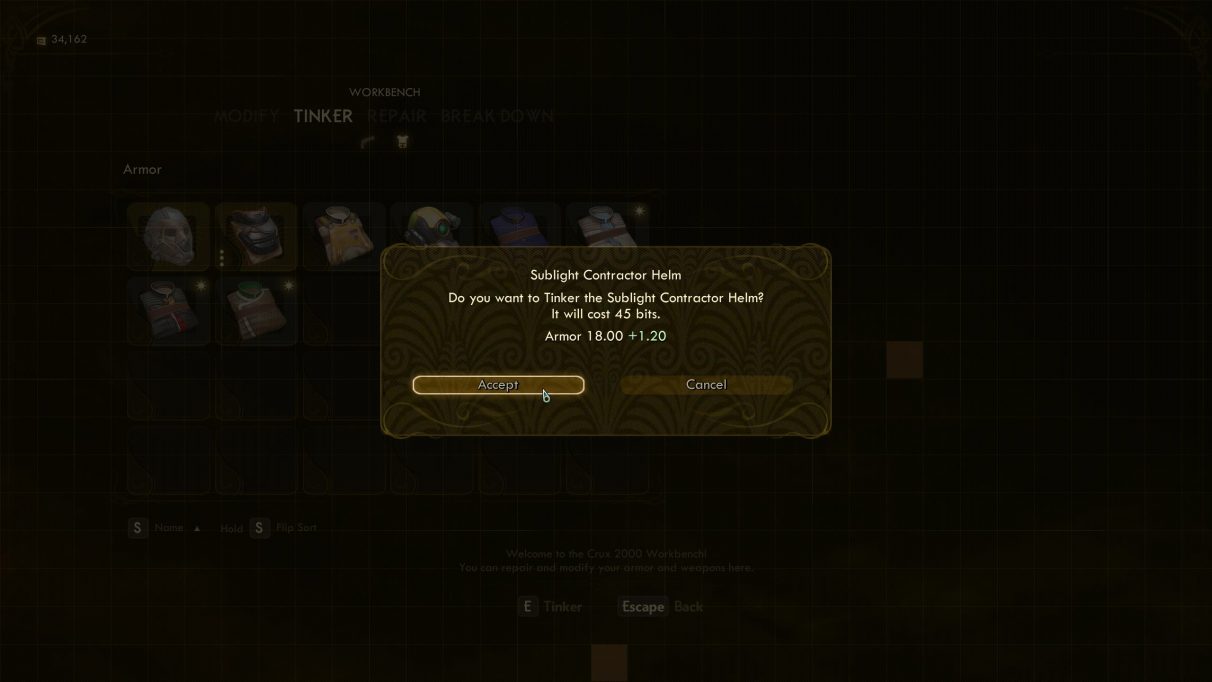 Tinker equipment - how to improve weapons and armor

The last (and possibly most important) function of the Workbench is to allow players to "Tinker" with existing weapons or armor by using the "Tinker" option at the top, and selecting the item you wish to improve. Tinkering a piece of equipment will increase its level, improving its damage (if it's a weapon) or its armor rating (if it's a piece of armor).

Doing this costs Bits, and the cost will increase exponentially the more times you tinker a single piece of gear. It's also important to note that you cannot increase an item's level more than 5 levels beyond your current character level. So if you're at level 15, the highest you can tinker a weapon up to is level 20.

Despite this, tinkering is amazingly useful for making sure your weapons and armor develop and improve along with you; and it allows you to stick to a specific weapon or piece of armor that you like, rather than being forced to leave it behind as other less interesting items outstrip it in terms of effectiveness.

Just make sure you have the Bits. 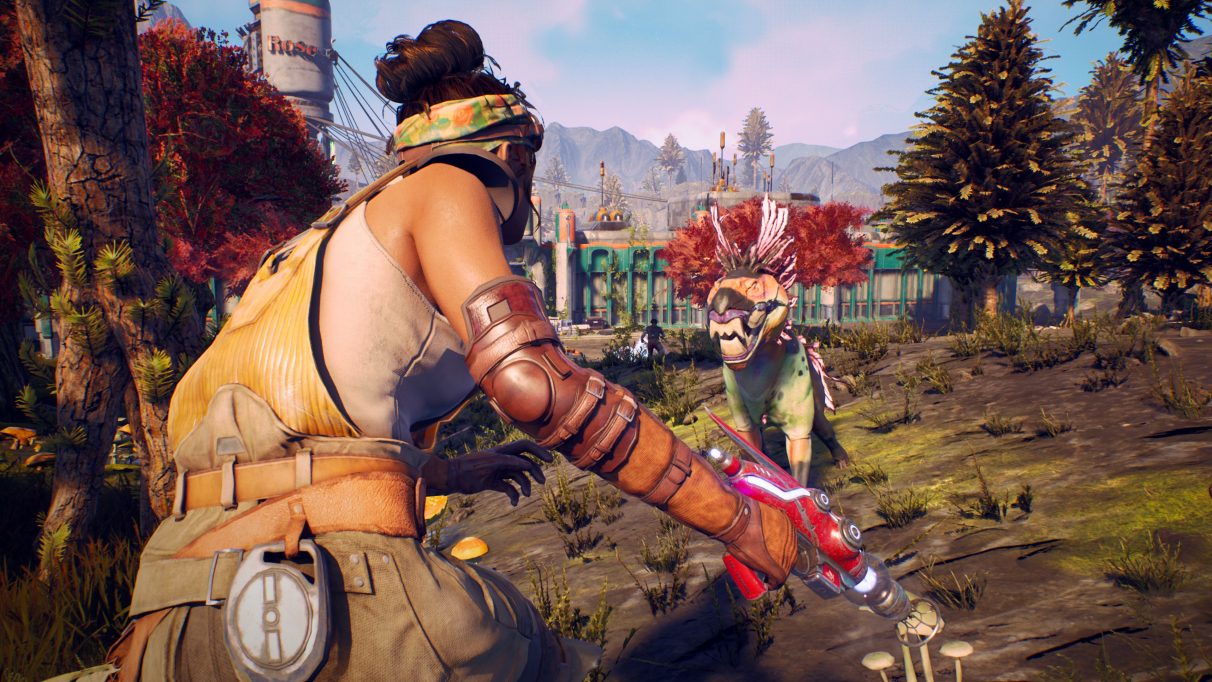 That's everything that the Workbench in The Outer Worlds enables you to do, and all of the mods you'll be able to attach to your various weapons and armor; hopefully you have emerged with a greater understanding of just how instrumental the Workbench can be in equipping you with the right tools for the job, and making sure your equipment never lets you down during your adventures across Halcyon and beyond.