If you click on a link and make a purchase we may receive a small commission. Read our editorial policy.
Premature Evaluation is the weekly column in which Steve Hogarty explores the wilds of early access. This week he has been aping Walter White in an ill-advised game about making drugs called The Pusher. Please do not ever honk chlorine and vinegar; it is a terrible idea and would kill you.

As a cool person, I know everything there is to know about drugs and drug paraphernalia, such as bongs and what have you. In fact, you’ll often find me hanging out with my fellow dope-fiends in what we in the business call a ‘drugs hole’, where we take weed, cocaine, and the rest of the types of drugs that there are. “Hey, quit hoggin’ all the drugs!” is a phrase you’ll often hear me say as I wrestle over a silver platter of that sweet, sweet sugar with a dozen Vice columnists, sending plumes of that good sherbert flying everywhere.

“Drugs are my absolute favourite,” I would later declare as I pat my swollen tummy, which by this point would be filled with a hot stew of illegal narcotics, but no sooner have I finished my sentence do I immediately drop dead. Dead of drugs. The Vice columnists, who I naively thought were my friends, scatter into the walls like counterculture cockroaches. And so my body rots there on the floor, alone in the drugs hole, until I’m just a skeleton and the coroner can only identify me by my marijuana leaf ankle bracelets. Instead of a corpse, my grieving mother has to bury an old mannequin that they’ve dressed in my uncle’s pyjamas. I don’t sound so cool now, do I? Not very cool at all. Don’t do drugs.

Sorry for scaring you all, but I am legally required to preface this review with an adequate warning about the very real dangers of doing drugs. In truth I am alive and well, and the only time I’ve ever tried a drug was when a friend let me have a go of some of his prescription ritalin and I spent the entire afternoon organising the contacts list on my phone and rearranging all the furniture in my bedroom so it pointed the other way. 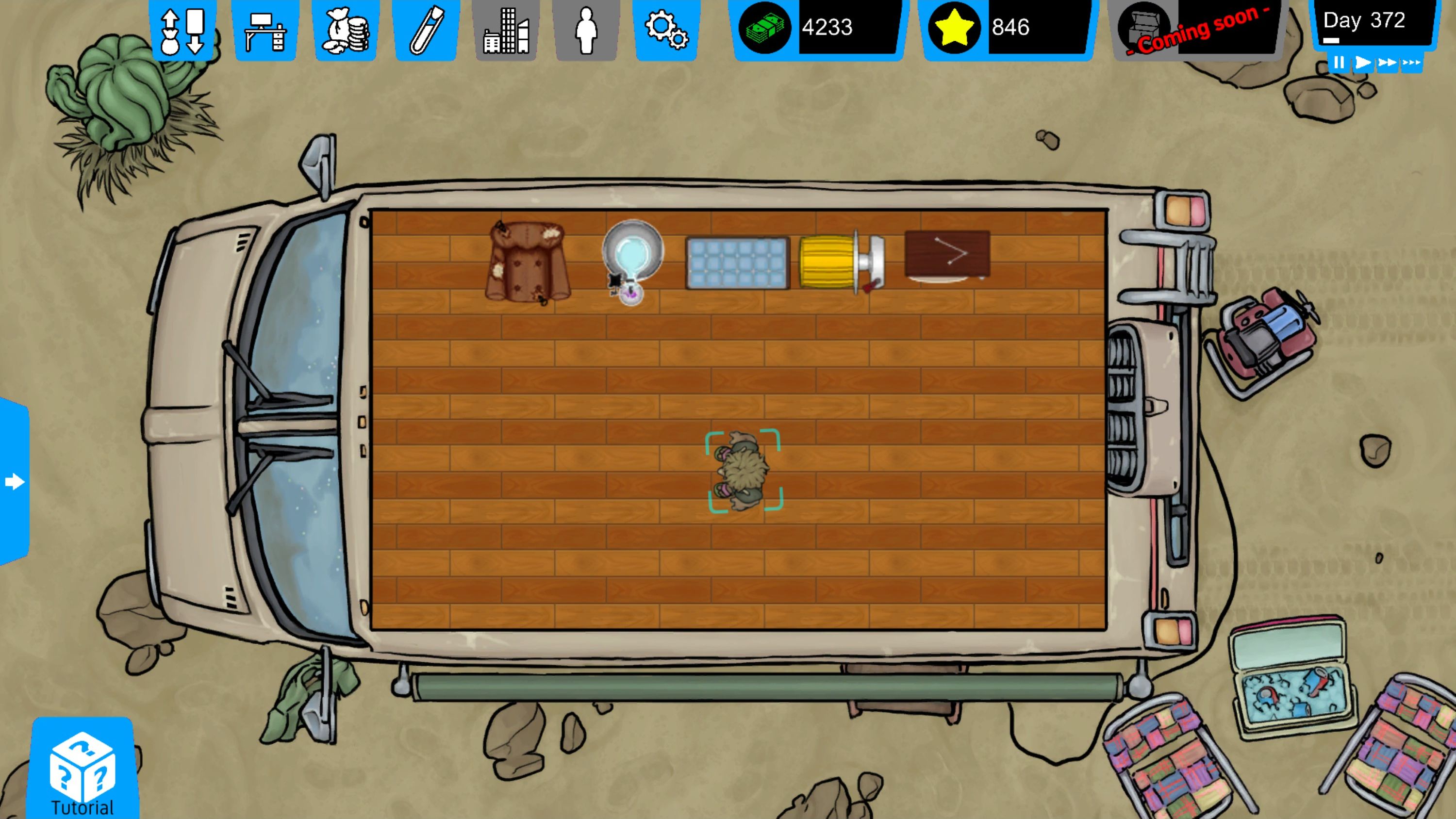 The Pusher is an early access drug empire simulator about making and selling different kinds of narcotic. Whether consciously or not, it harkens back to those pre-internet, viral games that your cousin would give you on a floppy disk labelled ‘WEED.EXE’, or a Flash game uploaded to Newgrounds in 2003 by a user called xXx-BongLoRD-420-xXx.

In The Pusher, you’ve got a Breaking Bad inspired camper van that can be outfitted with various pieces of furniture and scientific equipment. None of them do anything just yet apart from the lab table, which lets you combine chemicals to create your very own drug, which you can then name and sell to people. My first attempt at manufacturing a drug was a mix of chlorine and vinegar, a heady and probably lethal concoction I called ‘Goose’ and sold in vast quantities to an undiscerning customer base, who I can only guess were using it to clean their windows.

Selling drugs in the game works exactly as I suspect it does in real life. You click a button to go “into the city”, which everyone knows is the place where all the drug deals happen, at which point you’re presented with a series of potential buyers. Each one formally announces their full, legal name and how much cash they’re carrying, and requests a very precise amount of literally any drug you’ve got. Uppers, downers, outies, innies, your customers don’t care if they’re getting El Chapo’s private reserve or some crushed up Boots multivitamins, as long as they get exactly 31 grams of it. 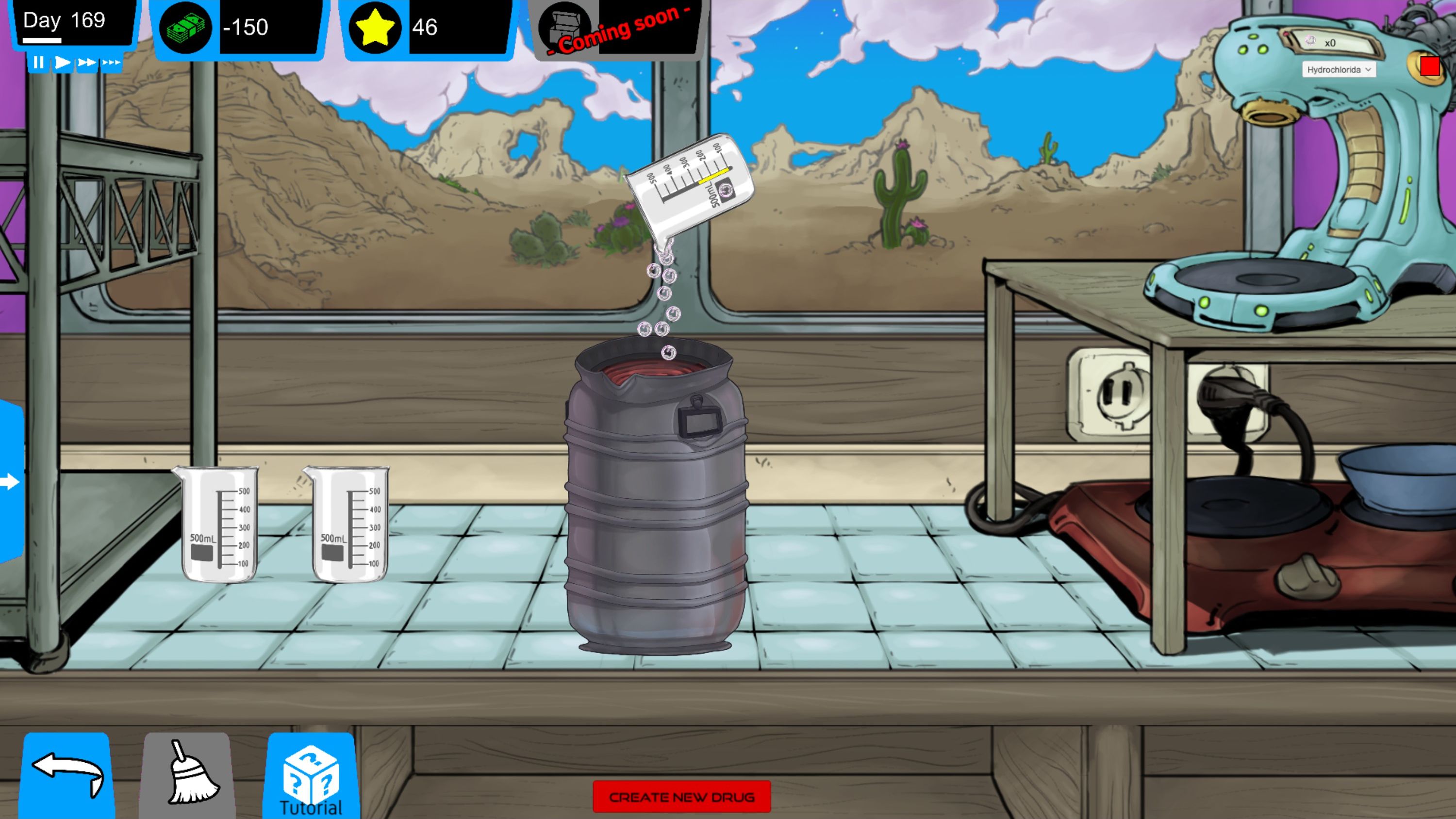 As a side note, it’s very satisfying to have a customer ask for an amount of drugs exactly equal to what you’ve got left in your inventory, so that you’ve got no leftover grams making your big box of drugs look untidy. It’s a Marie Kondo-esque feeling that I hope real drug dealers also get to enjoy sometimes.

You set the price with each sale, because in this reality people buy vast quantities of new drugs they’ve never heard of, and whose effects are unknown, at prices they haven’t already agreed upon. Ask for too much and they’ll storm off and accuse you of “profiteering”, which is an adorably naive thing to say to somebody who manufactures and sells drugs for profit. Too low and, well, you won’t make so much money. The exact amount to charge each buyer, I’ve discovered, is 90 percent of what’s in their wallet. It’s not a terribly complex economic system then, but there is a prestige rating that gets whittled down with each missed sale, or boosted by certain types of drug deal.

Your buyers have personal preferences when it comes to the effects of the drug they’re taking, and selling them the drug with their favourite effect earns you more prestige, which lets you buy rarer ingredients and (in a future update) unlock skills. Some of these preferences make sense, such as wanting a drug that gives them a ‘good feeling’. Others are ridiculous. The chlorine-vinegar powder I’d cooked up causes ‘fear’, for example, which is probably to be expected from a drug that smells like a recently disinfected chip shop. One fear-loving customer, presumably upon experiencing a debilitating wave of chemically induced terror, thanked me for creating such a wonderful drug and promised to remember me, and how the horror-powder I’d sold him made him feel so desperately afraid. Truly, I am a cook worthy of Walter White himself. 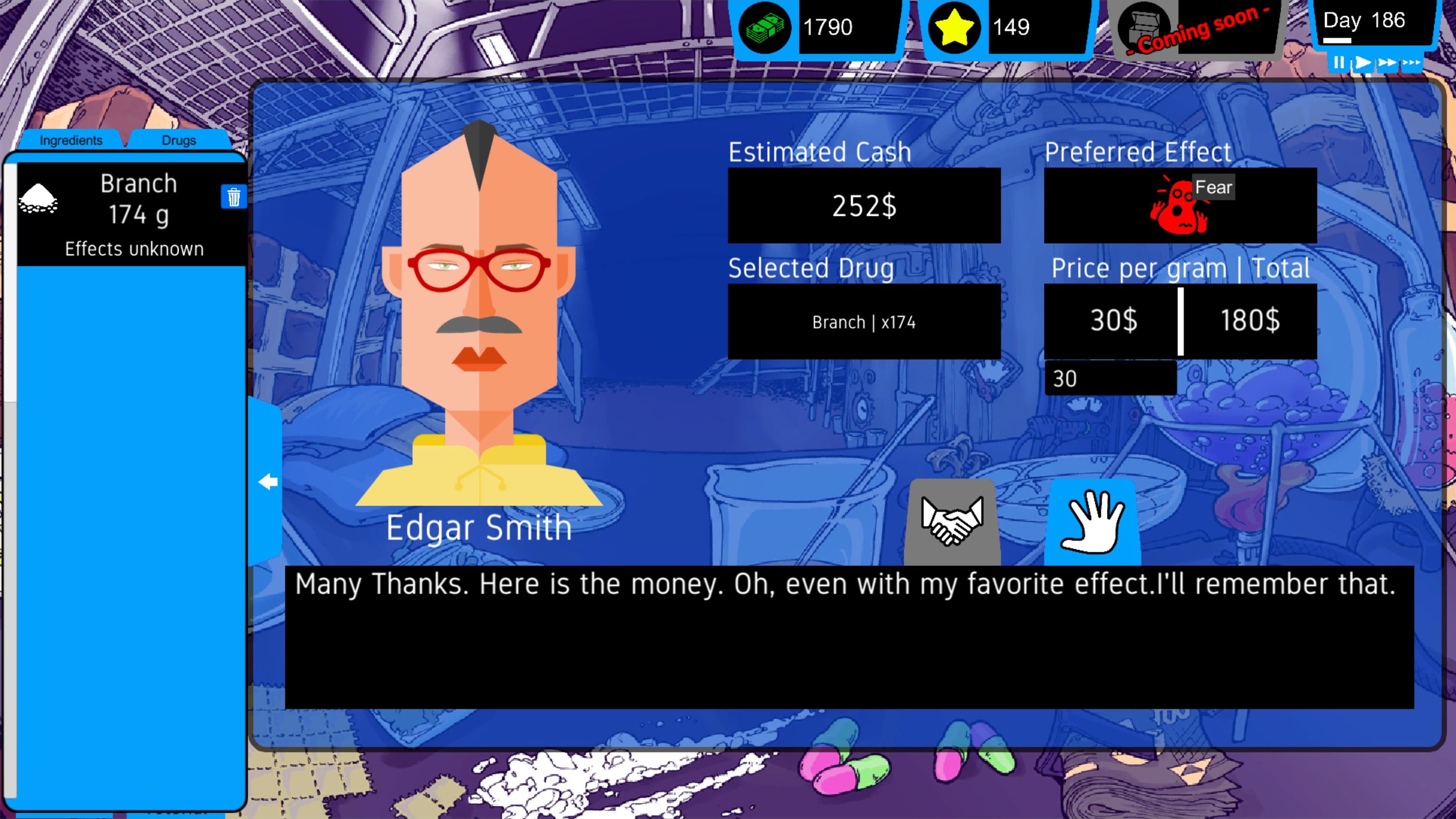 I sold all of the Goose in about ten minutes, which should have killed half of my customer base and ended the game, but didn’t. After that there’s nothing else to do. There’s about as much game here as xXx-BongLoRD-420-xXx could’ve bashed out in a weekend, and most of the content is still tied up in the colourful imagination of its developer, such as the ability to hire cooks and dealers to automate some of the processes, and whisk up better quality drugs using various bits of lab equipment, all of which look like fancy ice cream makers.

Notably absent from the roadmap, however, is any option to turn away from the narcotics business entirely, and to set off on a path of redemption towards the greatest drug known to man, Jesus Christ, who is “higher” than Cheech or Chong or that stoned skateboarding dog I saw on a t-shirt once, because he lives way up in heaven with God. Amen.

And don’t do drugs.